I intend to give traditional oil painting a new, creative interpretation in a modern context.

I like to place people or objects into a different time space and imagine what would happen. Anachronism is fascinating because it generates more possibilities. Thus, I recreated a classical Western oil painting, which name is Gabrielle d'Estrées et une de ses soeurs, in a modern context. Classical oil paintings are realistic, serious and function as documenting people’s daily life in the past. I’d like to add a lighthearted flavor to the work. Through my recreational piece, I imagine how the life of those two women would change when they come to the modern age. I aim at giving their life a brand-new interpretation.

Marcel Duchamp’s L.H.O.O.Q. (Mona Lisa with a mustache) shed a light on the idea of juxtaposition, which inspired me to come up with an idea of combining objects from different background together. My work is a readymade as I have put daily commodities which are not seriously considered as artistic elements into it. I really favor Wassily Kandinsky’s Composition series because of its simplistic geometric patterns and abstract sensation. I have put them into the background to intensify a sense of modernity.

Since I wanted to modernize the two women, I thought about what they would do if they come to the present. Their acts should also be representative of the modern world. Since the original work only showed the upper part of the women’s bodies, I thought about placing them into a sports car in a mountainous scene. But it did not serve my theme effectively. I also thought about turning the background into blank to give highlight to the figures, but it seems monotonous. At last, I decided to change the women’s clothing and their acts and put Kandinsky’s paintings into the background. Though it may look a bit overwhelming, I like to enrich the content of the painting. The work is demanding because I need to create the lower part of the women’s bodies and add many details.

The woman on the left is wearing a cold-shoulder shirt and jeans. She has a representative punk hairstyle and is listening to music through earphone attached to her iPhone. She’s wearing a pair of fashionable sunglasses. On her right hand, she’s wearing an iWatch while on her left hand, she’s holding a cigar. The woman on the right is completely “punk” with her punk rock spike, punk jacket and punk dress. She has her hair dyed with bold, bright colors. She’s standing on a skating board, with a headphone in her right hand. The background consists of three Kandinsky’s paintings which, due to their abstract style, serve as blurring the timeline. I created the painting via Photoshop especially the Lasso Tool with which I cut the daily commodities off their original images. The women are standing in the center, a position clearly shows that they are the focusing point.

I really like the painting because it is my first time to create a funny, unconventional painting while I usually draw in a traditional manner. I believe it clearly shows the theme of anachronism and the viewers will find it amusing, which is also a part of my purpose. The major problem may be that the background is not coherent with the figures. Both are enriched in colors and elements, making the painting a bit disordered in overall. It may be better if the background is simpler to reach a balance between the back and front layers. Probably there is a better alternative of Kandinsky’s Composition series.

Pop art has given me untapped inspiration on reproduction and appropriation. It has exposed a lot of possibilities in the field of art to me. It has shown me that being realistic or being complicated is not the best every time. It has successfully altered the boundary of art and stretched its definition. We can put whatever into a work as long as the output delivers the artist’s message effectively. This time, I put the women into a Western modern context. Next time, I may put on cheongsam for them. Through adding Chinese traditional elements into the painting, a new theme of multiculturalism would also emerge. The painting would come across not only the border of time, but also the boundary of culture. 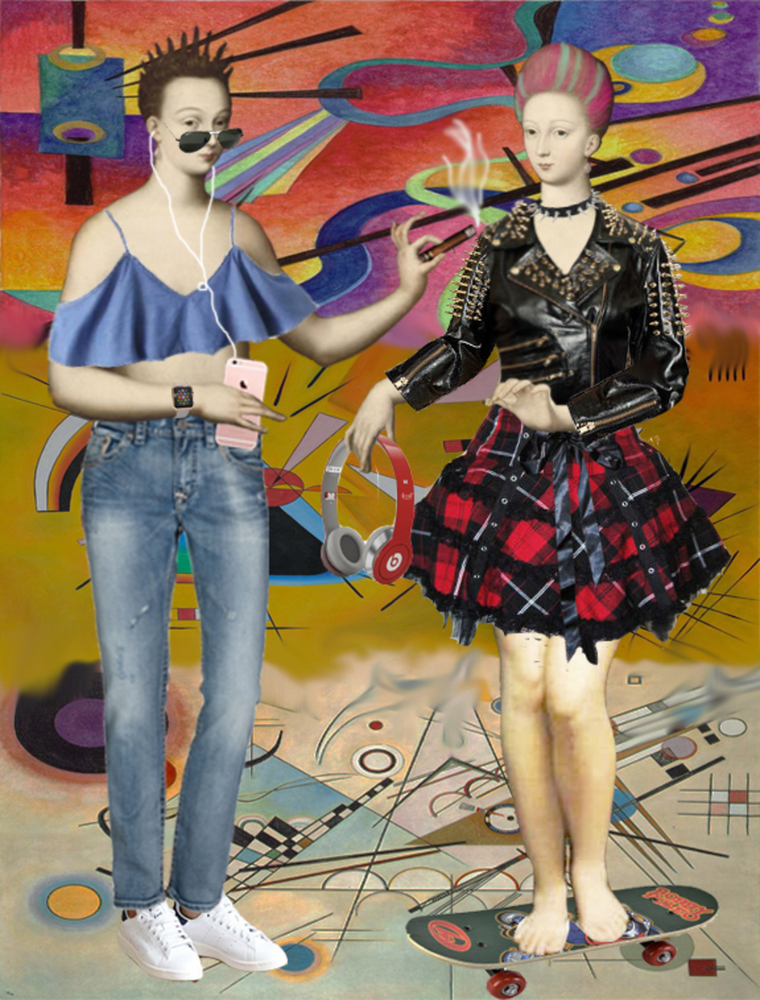 I think that this is extremely well done. I like that you didn't just photoshop over the original one but instead completely recontextualized the painting. The use of vibrant colors and the abstract background really lends to the modern aspect of the work. I also appreciate how the expression and body positioning of the subjects of the painting remain consistent from the original painting to your artwork, but they are doing massively different things based on the objects around them.

I intend to give traditional oil painting a new, creative interpretation in a modern context.