Religion is an interesting topic in China. Officially, Chinese government supports science instead of religions, but people are still allowed to choose their own religion to believe in. Lots of successful businessmen were buddhists and even lots of government officials were secretly buddhists. Because the environment for religion is so ambiguous in China, I really want to see how people will react if they see someone start being religious. From people's reactions, I can also see how people are respectful to other's free will. I have both religious friends and non-religious friends. To analyze different kinds of people, I can evaluate people's respects on a general level.

To reach this goal, I changed my profile photo to a selfie in which I hold some Buddha beads. This "holding buddha beads" position can clearly indicate that I have already become a buddhist.

In addition, I decided to post some text saying that "I am a devout believer", and an image that has some buddhism content. I decided to search from "Weibo" to see if there is any famous buddhism person posting some related images as well.

To be more convincing, I also planned to change my user name as "Buddhist Zhehao" and act as a buddhist.

Because religious people I had around me are mostly Buddhists, I chose to post a weibo post from someone who is related to buddhism. Furthermore, because almost all my friends and relatives know that I am a non-religious person, they can see from my post and profile picture that I make some new choice for my life. In this way, I can see both how religious people and non-religious people view my new choice about religion, thus, giving a general analysis about how people respect other people's free will. 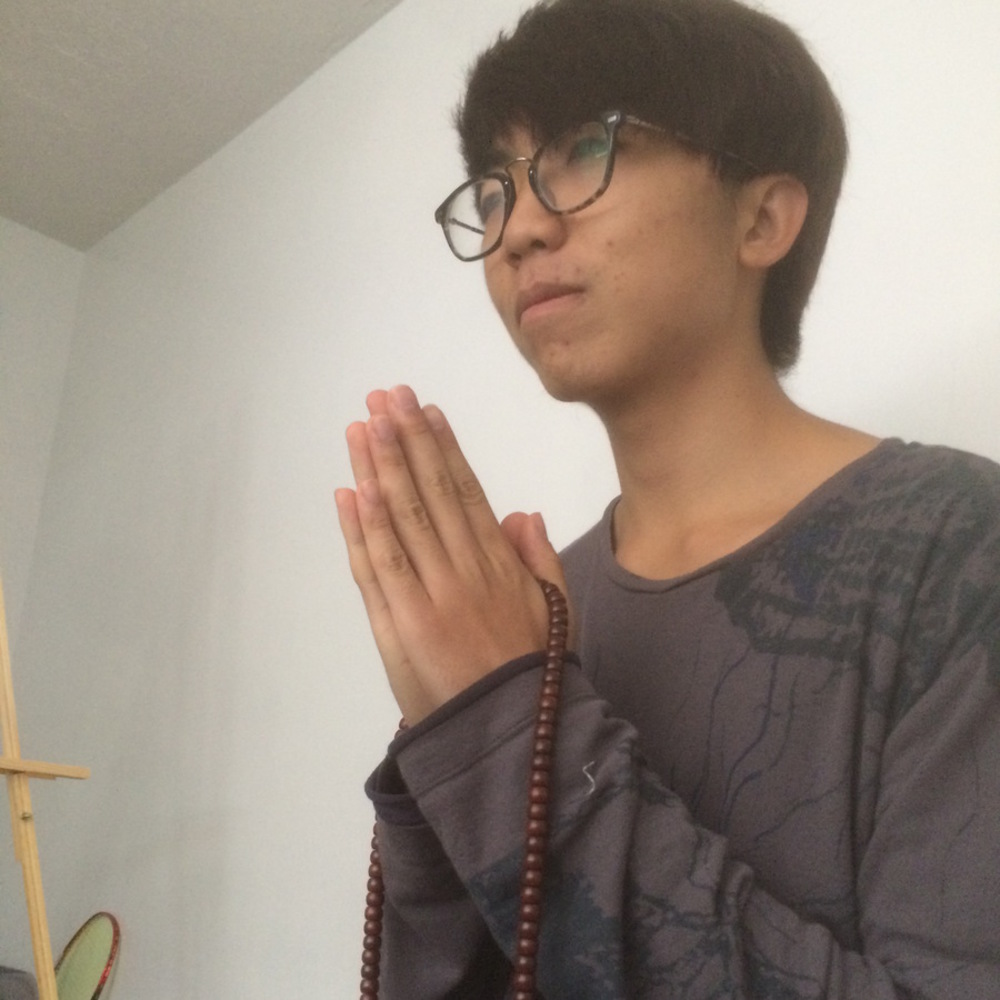 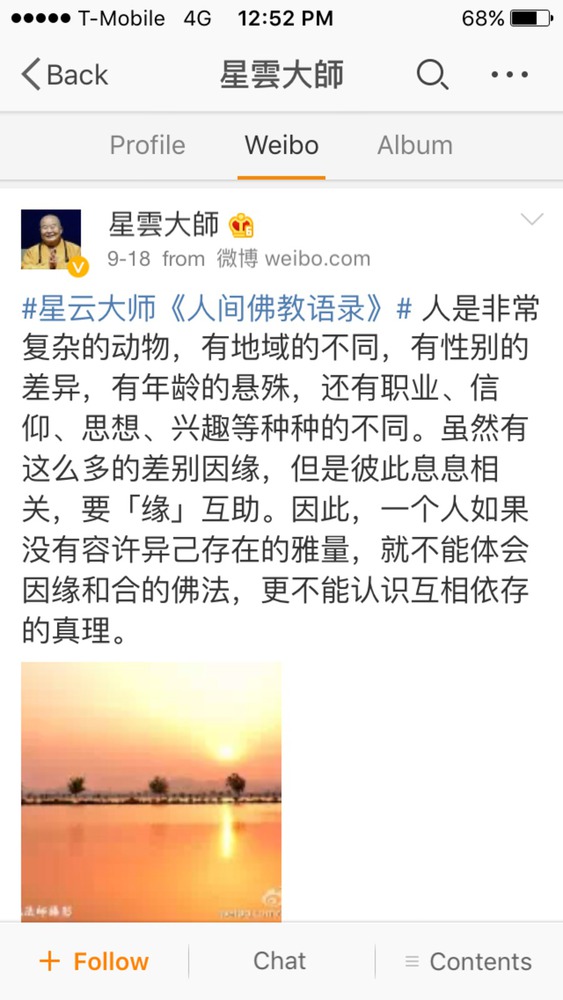 This is a picture that I screenshot from weibo this morning(9.20). The poster is a so-called "master" in China. Lots of successful businessmen trust him for some reason that I have no idea. The text is just saying something like "people should help each other." Of course I did not follow him.

Translation: What the heck is your profile picture?

This is an audio message from one of my best friends. What she said was as following:

"What's wrong with you? Did you just break up with someone? I am so worried. Do you want to have a phone call?"

We always joke on each other. Her responses make me a little bit moved. Her reaction made it quite funny as well.

This is a freshman I just knew. Here's her response's translation:

"Oh my God. Do you believe in buddhism?"

I think because she is not familiar with me as others are, she shows more respects on my new religious believing. Also, because she does not know me well, her surprise is not about the fact "Why Fred suddenly believes in buddhism" but "Fred is a buddhist!"

Translation: What's wrong with you, Fred?

Translation: What do you want to do, Buddhist?

Besides all private messages, I also got lots of comments under my post. 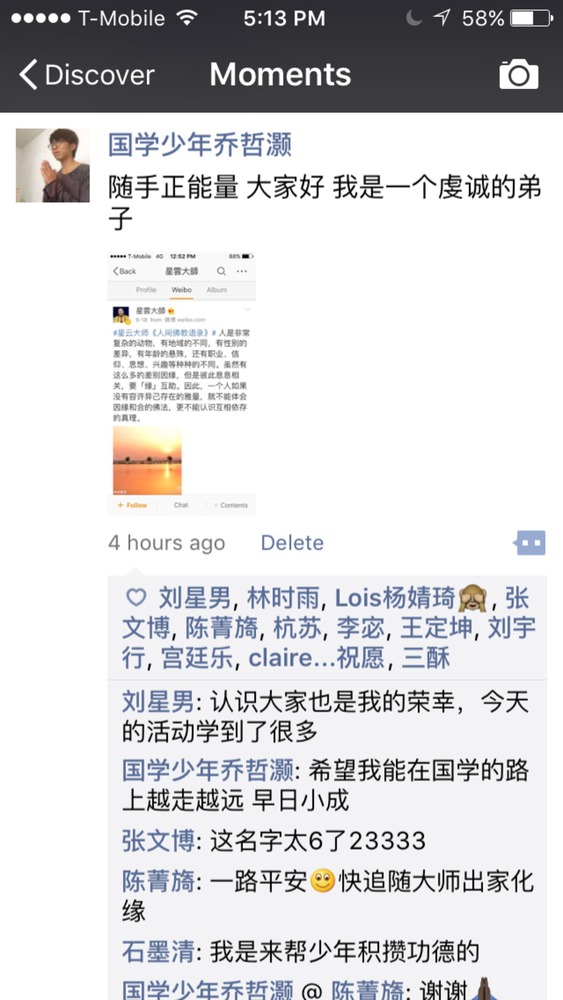 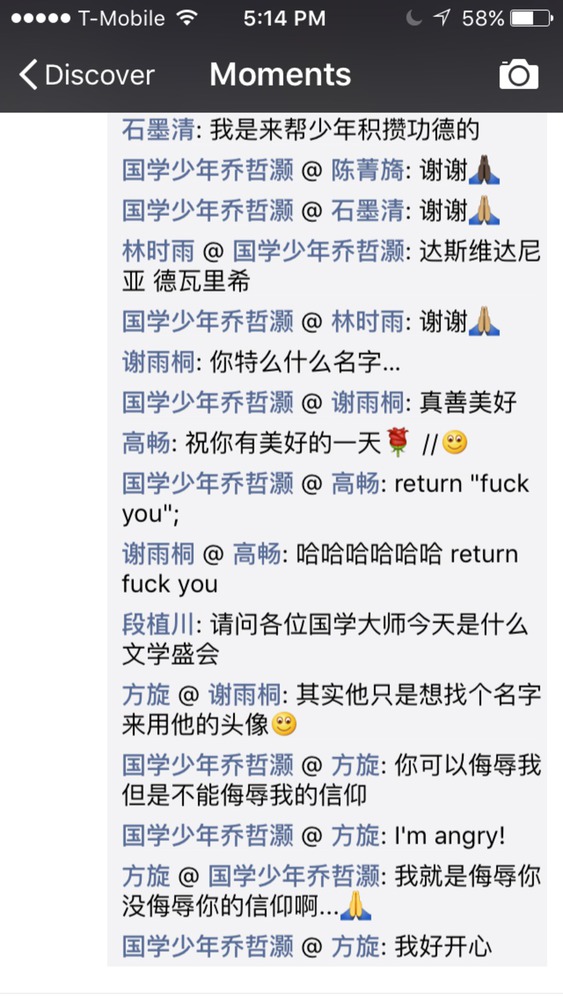 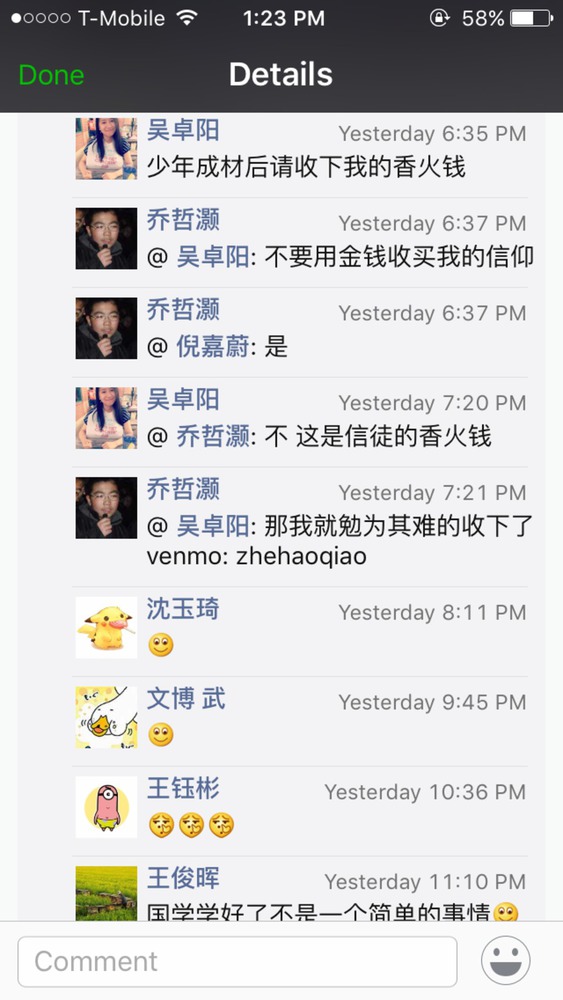 The very first couple of lines were basically making joke on me. I think they really thought I began to believe in buddhism, but because we know each other so well, they still joked about it. For the last few of comments, people were very mean actually (except the last line). The last line is my mom. She told me it's very hard to be a buddhist... I have nothing to say about that:) 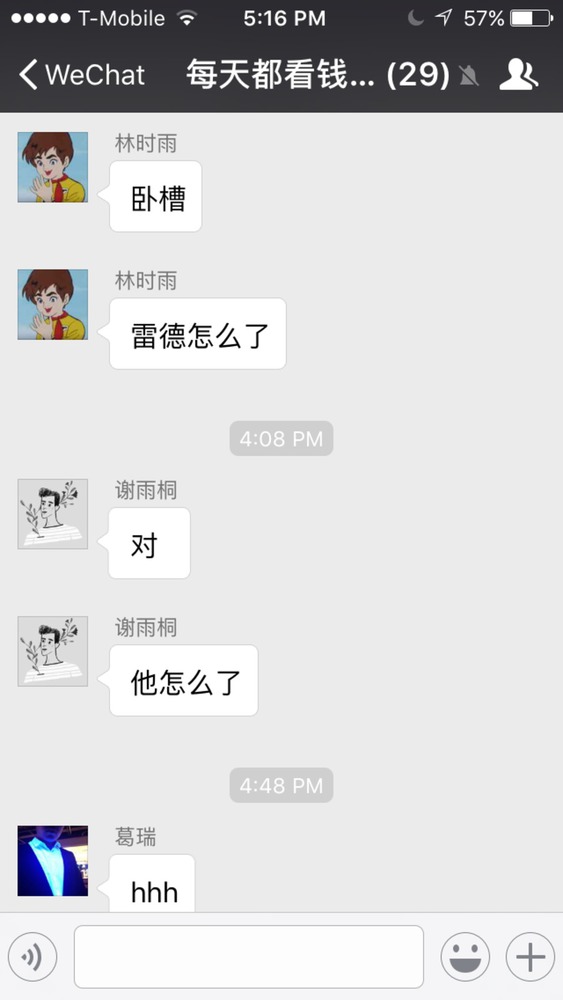 Then, my high-school friends were even discussing about my post in we-chat group. Nothing special, they were just asking what was wrong with me.

It is actually the people who pressed the like button surprise me the most. I had never expected those would be people who were gonna "like" this religious post. Most of those people were quite scientific and not familiar with me. People that I expected to "like" this post were my elder relatives like my grandpa, uncles and aunts. However, it turns out not the case. 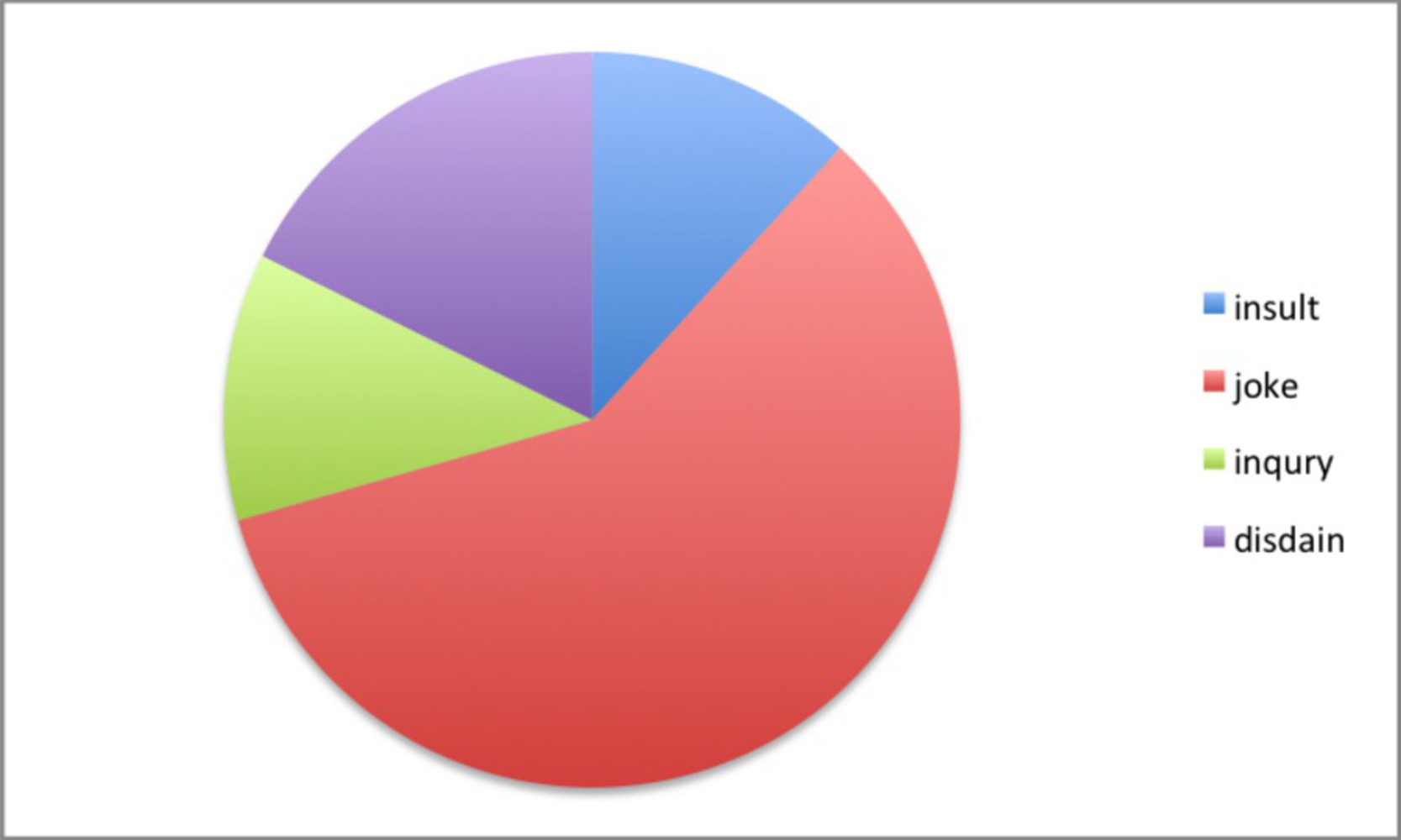 In this special day, I received tons of messages from my friends and relatives. As I expected, messages are quite different. Some are funny; some are annoying, etc.

To answer the question I asked in the very beginning of the research, I think people are fairly respectful to other people's free will and religious choices. From all the responses I got, only two of them are insults, and one of the two is actually half joke. I think today, people are respectful to others' religion. However, not a single person seems like to discuss about my new religious believing. Instead, they just asked me if I am Okay. I think it is quite natural and does not indicate that people do not respect my choice because from their point of view, my action was actually sudden and unexpected. If I were them, I would also ask my friend if he is ok, even if I am a buddhist.

As we can see in the chart above, most of my friends were joking on me. I asked some of them about the reason, they all told me that they thought I was just joking or being sarcasm. This is actually a very strong point that on the Internet, people are less likely to believe that people will do anything unexpected. Because it is quite easy to be hacked on the Internet, people are more intended to believe people who did unexpected things are hacked or just being funny. Since people do not have face-to-face interaction on the Internet, they cannot see each others' facial expressions and other convincing actions by their own eyes.

Because I am using we-chat as the experiment platform,people who can see my post are mostly my acquaintance. No strangers can see my post. I think that would be one of the reasons that I haven't seen anyone who would love to discuss buddhism with me. I think if I had chose another social media, which involves more strangers, like Instagram, I would have received more buddhists' friendly greetings and discussions about buddhism.