Made by Mauricio Cano

My goal to this piece was to connect the idea of digital connectivity with the usual effect that this connectivity has on our perception of other humans: an idealized, beautiful, but often times distorted, form. Whether it be taking 600 selfies and uploading the one where the light hits you perfectly or photoshopping models and celebrities to fit the standard for beauty, our increased connectivity has made us more public and, consequently, more self-conscious of our appearance.

The pop-art works of Andy Warhol focused on the banal. It cherished mundane, everyday things or people. Transient, expendable, low-cost, mass-produced, young, witty, glamorous or big business are all adjectives that could associated with his subjects. I chose to reflect some of the features of pop-art in my piece to illustrate what I believe to be a trivialization of the individual. Since the standard for beauty is so narrow and close-minded, a given person’s unique features are shunned if they don’t conform with the standard—symmetrical face, large eyes, full hair, etc. As a result of increased digital connections, exposure and consequent pressure to abide by the standards of beauty, everyday people have become like the mundane celebrities of Warhol’s work: mass-produced and expendable; with everyone having the same hairstyles, same make-up, same clothes, same lingo, etc.

I chose to distort the subject’s form by removing her shoulders in an extreme attempt to make her more slender (a feature valued highly in society). I removed all her blemishes and added make-up to build on the idea that beautification is a prerequisite for display in social media.

To incorporate an engineering concept, I chose to use a representation of a circuit from computer engineering or digital circuit design field. Its significance is to illustrate the increase interconnectivity we’ve experienced as a result of the world-wide web, social networks, email and cellular phones.

I tried to make her hair look like neurons (an organic counterpart to the digital circuit) and made the circuit connect to it and her forehead to play with the idea of an increasingly digitized human—where technology has become an extension of who we are and how we think. This blending of human and technology, which comes with an increased awareness of others and the fact that they’re watching you, is a big factor in how we see ourselves and what we aspire to look like.

This piece illustrates a woman, stripped of her imperfections and altered to fit a more mainstream idea of beauty. Her appearance is the result of a increased pressure to abide by societal standards for appeal that our increased interconnectivity and, consequently, exposure to others, has caused.

In the piece, I use elements from Andy Warhol to exemplify the trivialization of the human form. A transformation from a unique and imperfect view to a mainstream, manufactured and mundane one. In addition, I’ve included digital circuitry to represent the new connections made by the developments in information technology. The connections to the subject’s hair and forehead are meant to parallel the new “digital human,” a being that uses technology as an extension of itself, rather than as a tool. '

Adjectives to describe this piece:

I think that this piece is successful in communicating a message of distorted beauty and the increased digitization of humanity through information technology. The vibrant colors and contrasting tones are reminiscent of Andy Warhol's work. Within the context of his pieces with celebrities and mundane/everyday objects, this piece is able to make a connection to those ideas and reinterpret them as a commentary on what we define as beautiful today. Soft textures, slender shapes and a blemish-free face exemplify these ideals while the distortion of the subject's body reminds us of the extremes often taken to abide by the standard (surgeries, treatments, etc). The balance and merge of both geometric and organic shapes serves to illustrate the blending of what human and technology. People have become increasingly dependent on their devices, to the point where they can be considered an extension of the self. Our brains have been expanded to include all of google and our lives exposed and made available to others through social networking.

How would you have responded to this artwork before this semester? Reflect on the difference between the two answers.

I think that before the semester, I would've been able to appreciate the piece only on an aesthetic level. That is, only able to consider it as "nice looking" or "awful." I think the main difference now is that I can derive meaning from the piece by examining the elements of the composition and comparing them to things I've seen before. Within this piece in particular, the Andy Warhol connotations help me derive ideas of materialism, banality and every-day plastic celebrity beauty that I would've been unable to come up with before the semester. 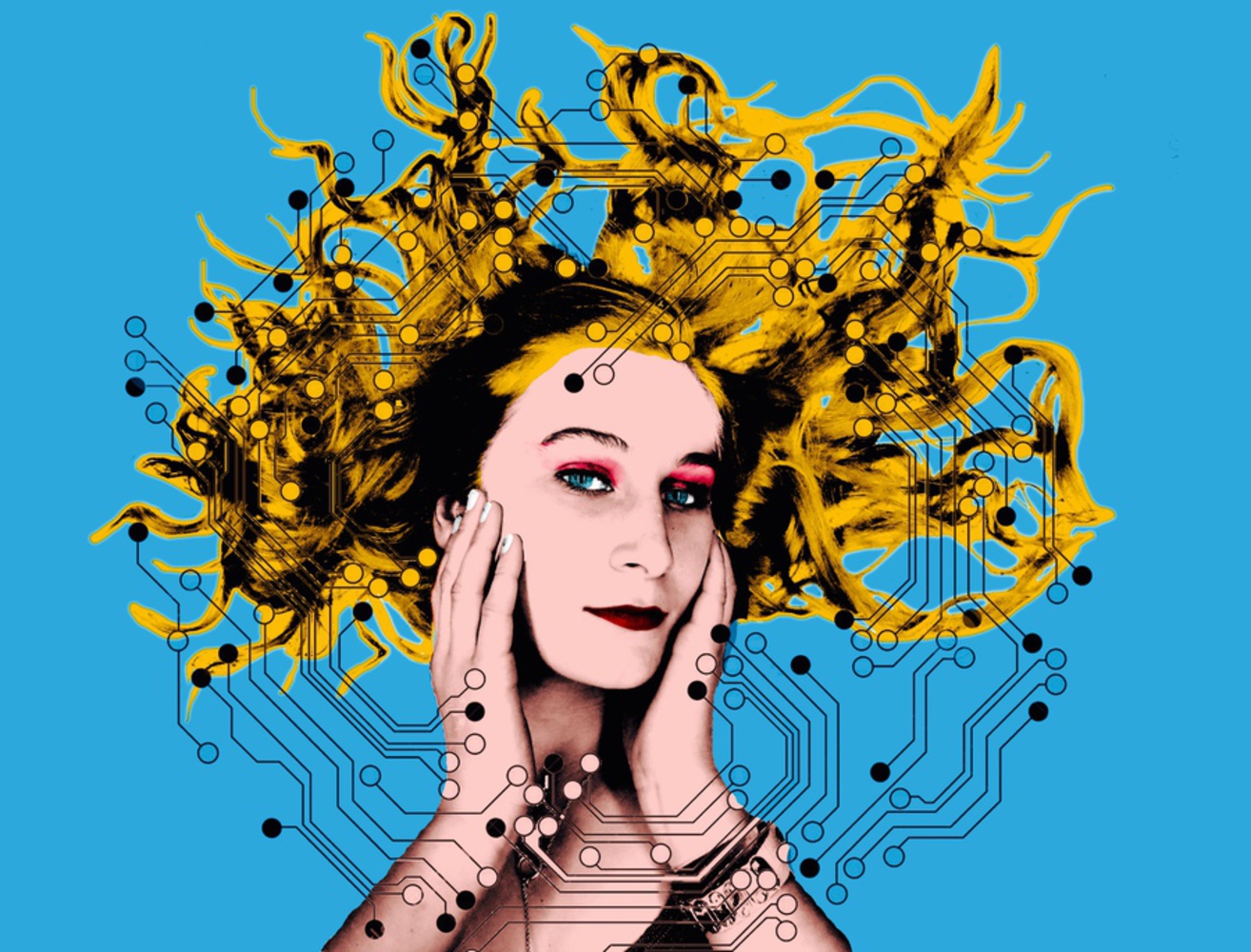