Made by Lu Zhu

The dawn of Driveless Future is coming soon. How can our urban physical and policy environment better prepare for it? How can we effectively get feedback from planning or design professionals, general public and interest groups to react to the Driveless Future and help municipalities better prepare the future, and make policy changes to better protect the general welfare of the public.

The dawn of Driveless Future is coming soon. We see many autonomous vehicles moving around in some cities across the nation. Pittsburgh as center of innovation, it has Uber, Argo AI, Ford, etc. who are putting their autonomous vehicle researches into reality on city streets. It is important to learn how citizens are actually feeling about it in the city, what are their perceptions of the coming changes, which they may not have been aware of, such as potential physical space or transportation policy change, etc. For example, the streetscape change, how autonomous vehicles would include the public right way design, the street curb design/spacing, then influences the pedestrian activities on the sidewalk. Many policy makers have noticed the potential Driveless Future impacts on infrastructure design, including parking facility, street design, traffic signalization design, etc., would be influenced by the rapid developing autonomous vehicle technologies. How can we effectively get input from professionals from a wide range of industries, and encourage general public and interest groups' active reaction on Driveless Future and help municipalities better prepare the future, and make policy changes to better protect the general welfare of the public.

There are many research already exist.

Nissan Research on autonomous cars is trying to complete human side of autonomous cars, so to study how vehicles could interact with human and learn from human behaviors.

Virginia Tech Transportation Institute and Ford are working together to use self-driving vehicle using a "seat suit" to conceal the human driver to explore pedestrian reaction to external lighting signals that indicate when the vehicle is driving, yielding or accelerating from a stop. This is a still a passive way to engage with the public's feeling of autonomous vehicle.

To effectively engage with the citizens in Pittsburgh, I'm suggesting this research project should be a mix of online and offline strategies to talk with professionals in person and engage with citizens to understand their concerns. However, the research should based on large enough data sample to be able to process the representative analysis and visualization. In this manner, online public participatory data gathering strategies are important as well.

The online citizen participatory data could be gather through open platform like Twitter or Instagram, collecting all autonomous vehicle related Tweets or posts, such as filtering Tweets has key words or # including autonomousvehicles, autonomouscar, selfdriving, driveless,etc., which are geographically located within Pittsburgh Metro Area. After collecting the data, we would check the data and start secondary filtering process to get the suggestive or other quantitative/qualitative data instead of just having Tweets or posts just "Awesome, good" these less informative data. Lastly, with the filtered data set, we could perform their location analysis, such as where they Tweeted, or the purpose of their trips. For instance, if there are many data suggesting large autonomous vehicle related Tweets are grocery or food related, we could assume the potential driveless future physical environment improvement in market district or commercial businesses district, such as drop-off space.

Other online participatory data collection could be more direct, it could be one topic Tweet which request for feedback on general public's view of potential urban physical and political environment changes in Pittsburgh Metro Area, or people who travel to the city. It would create more direct response on how they perceive the driveless future.

Additionally, municipalities could open feedback portal for citizens to get feedback on their perception on driveless future and how autonomous vehicle should be regulated.

For the source data, it could be gathered through Twitter based on the key word selection, then summarize the information from individual posts related to the autonomous driving. Or structured survey to collect information from general public or professionals. Or some related news data through key word selection, so I can get information of the articles. Or whether the data could be collected through the cars, to recognize the pedestrians' reaction of av, NCU did a research on it.

Using Instagram as an example to image the potential public engagement.

With the encouragement of posting Instagram photos and comments from Pittsburgh local municipalities, citizens could post their views of autonomous vehicles with special "#", such as PittsburghSelfDriving included in the posts, so it could help data analyst to collect the data and analysis.

In this circumstance, we could encourage citizens structure their posts around the location or service use of autonomous vehicles, how citizens were using them, and how they perceive these could influence their life, or even their living environment, or what are their concerns or how these autonomous vehicle should be regulated.

With the data collected from Instagram, we could use Gephi to visualize the activity correlation to the posts, which would be able to indicate the activity diversity regarding the use of autonomous vehicles or other autonomous vehicle related activities. In this manner, we could have a sense the location concentrate where we should pay more attention on public infrastructure improvement, for example, a high percentage of people post their related experience in grocery shopping, or other commercial district, which might indicates an improvement of sidewalk space improve of public right-of-way's drop off space. 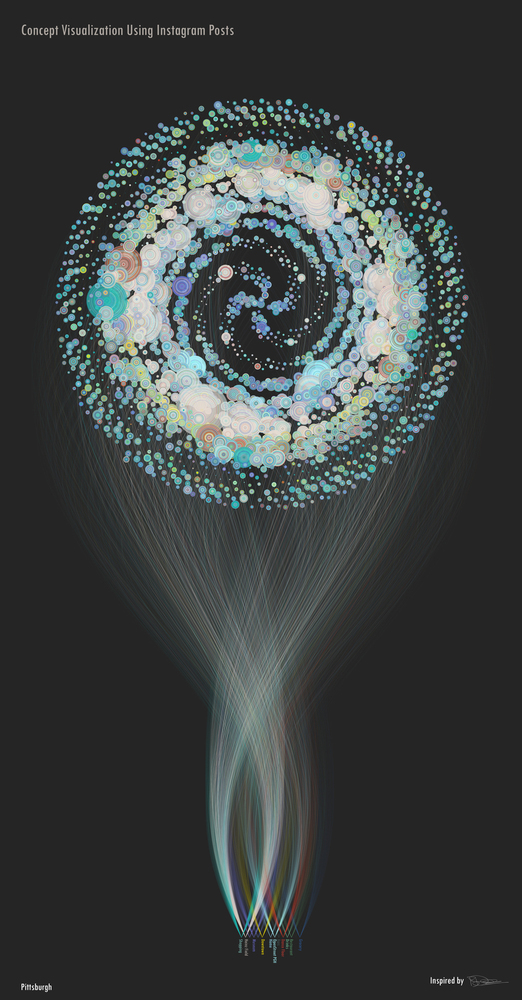 As being described previously, there are many ways of engaging with the citizens to get sufficient feedback. Each way has its own pros and cons of understanding citizens' demand, because it always only has a certain group of people being captured in the process. Therefore, if time and financial viable, a mix of data collection method would work better to engage with citizens.

As a result of limited data collection coverage of citizens, I think the combination of Open Platforms and corporate partnerships with Uber or Argo AI should work better, and save municipal operation cost. Although it may take time to process the data for the information gathered from open platforms, however, it could generate more data for analysis purpose. Also, the social media platform are more commonly used in large social groups, so the survey sample should be more representative.

I'm suggesting municipalities to use official account or start a new account to start a topic posting or tweeting event, so citizens could participate and post/tweet the information which the municipality are needed. For example, please see the tweet below, which aimed to get feedback from general public. Following this method, municipalities could collect the data directly from these "#" and responses below the Tweets or Retweets. Similar method could also be used in Instagram data collection regarding citizens or visitors' opinions of Driveless Future.

Additionally, municipalities could partner with autonomous vehicle companies to make these service providers to directly engage with the citizens or services users. In this way, services providers could directly encourage these service users to take the surveys, which would help generate more active responses from citizens. On the other side, these companies could gain support of improving infrastructure to accommodate their autonomous vehicle development. 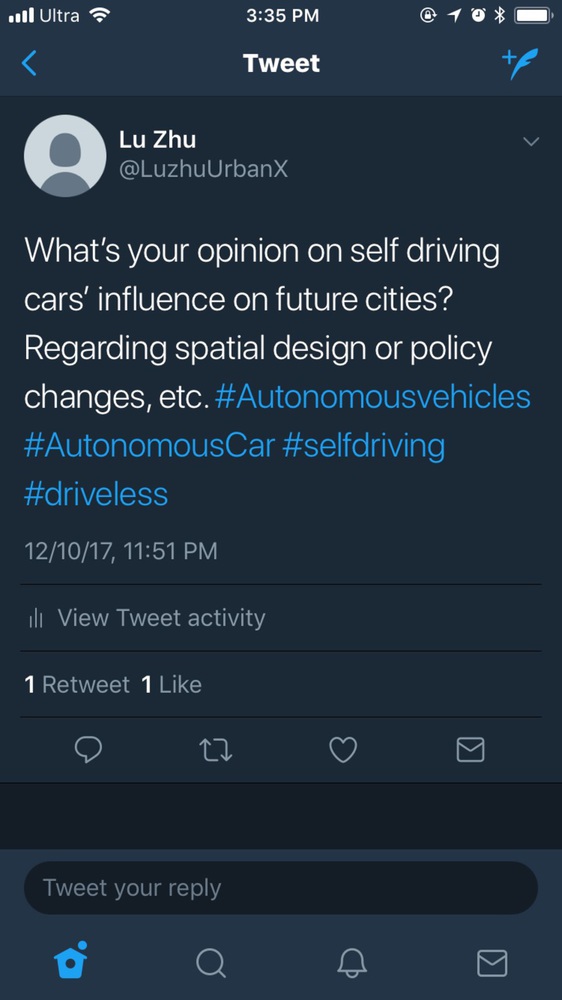 To better perform this task, Pittsburgh's local municipalities should take the lead on increase people's awareness of changing urban transportation system - autonomous vehicle. After citizens have a sense of how Driveless Future could influence their part of life, then they could actively involved in the public feedback or data collection side. There are many stakeholders in play in this participatory data collection process, including citizens, corporation and municipalities. A well organized collaboration platform is needed to effectively get the data, so each group could benefits. Municipalities could more effectively deploy the fund for public infrastructure improvement; corporations get improved testing ground without large investment; citizens have better environment and quality of life.

The dawn of Driveless Future is coming soon. How can our urban physical and policy environment better prepare for it? How can we effectively get feedback from planning or design professionals, general public and interest groups to react to the Driveless Future and help municipalities better prepare the future, and make policy changes to better protect the general welfare of the public.