This aims to be a digital reproduction of Nigerian artist, Jimoh Buraimoh's, Drummer painting. Rather than trying to reproduce it by only drawing it I tried to put a bit of a spin on it by using the image of an actual drummer as the subject of the work. 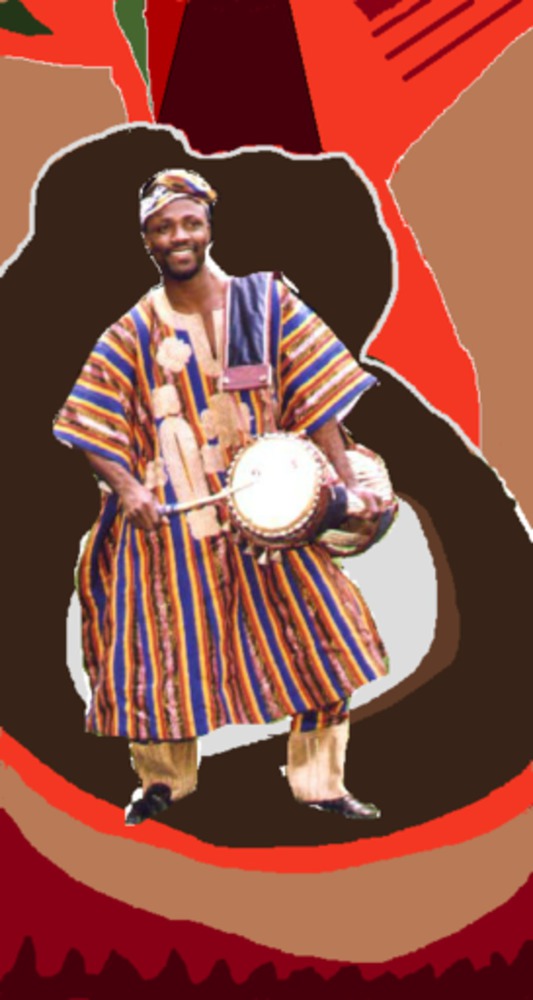 Jimoh Buraimoh is a Nigerian artist known for blending western media and Yoruba style in his work. He was especially inspired by the Yoruba tradition of including beadwork designs into ceremonial fabrics.

The work I selected to reproduce was Buraimoh's Drummer. Because I am of both Nigerian and Yoruba descent, I related particularly to this piece, which is why I chose it. The images and patterns felt a bit familiar but the use of all the colors were in contrast quite refreshing. Seeing the smile on the drummer's face in the painting gave me a bit of nostalgia as the festive mood and bright colors took me back to days my family and I would celebrate occasions in a similar fashion.

For the reproduction of this work I went through a few stages before I decided on what I wanted to do. I do not have the highest ability when it comes to creating artwork digitally, so creating masterful reproduction was not my intention. So I Wanted to instead focus on putting a different spin and see how it affected the mood conveyed by the work. Initially I wanted to recreate the pattern in the background digitally then take a picture of me dressed as the drummer and overlay it on the background. However, time and supplies were limited so I had to think of an alternative that would achieve a similar effect.

The alternative I chose was to use an image of an actual Nigerian drummer as the subject of my reproduction instead. So then I roughly recreated the background pattern of the Drummer piece. Then I put the cut out image of the drummer on top in the center of the piece.

I feel that my reproduction of the painting does not quite capture of the them of the original work. Besides the obvious fact that it is not as clean or refined, the festive mood that I get from the original work is absent in my reproduction. I feel like the colors in my work do not complement each other as well as they do in Drummer. This comparison helped me see that the original work was much more than a subject and a pattern behind him. Instead it shows that both the drummer in the foreground and pattern in the background work together through colors and positioning in order convey the theme as seen in the original. If I were to do something differently I would get an image of a drummer whose wardrobe complements the pattern more. I would also work on finding a better position of the drummer than what I did in my reproduction.

Your research of the artist leaves a bit to be desired, but the reflection on your work is good. I’d agree with your critique of your reproduction. The picture of the drummer looks out of place against the painted background. I wonder if the composition would feel more integrated if you had collaged images in the background to create shape and texture.

This aims to be a digital reproduction of Nigerian artist, Jimoh Buraimoh's, Drummer painting. Rather than trying to reproduce it by only drawing it I tried to put a bit of a spin on it by using the image of an actual drummer as the subject of the work.