shut up about banksy

Use the words and work of POC to show the ways they're affected by the embracing of street art and increased criminalization of graffiti.

Full disclosure: on principle, I don't like most street art. It's not that I don't think it's "real art" or don't get it. I think the messages they try to convey rely on tired, boring sarcasm and don't contribute anything useful or meaningful to conversations about politics, economics, or social issues. As Dan Brooks said a few weeks ago in the NY Times, "sarcasm is our kitsch" and more often than not, street artists are the worst perpetuators of it. Regardless, a more important thing to note is the way that street art has been widely embraced by the art world. It's no secret that the art world has taken a long time to pull together even a half-hearted attempt to not seem racist and sexist (*see anything by the Guerilla Girls, who spoke out about such issues long before Banksy came onto the scene). Graffiti is the original street art, but it's generally percieved as something done by mostly poor people of color. Despite this not being the case, the art world has never approached it, but once white street artists gained visibility, they were able to sell their work for thousands of dollars.

I wanted to focus particularly on the detrimental effects that the popularization of street art has had on people of color, even those who are not involved in the graf scene at all. It's important to note that the people in graf span both class and racial lines, but because of it's perception it is criminalized, whereas street art's illegality is acknowledged, but never followed up on. A few quick google searches, plus some discussion with friends gave me the start I needed. Taking a cue from Jenny Holzer, I sought words and perspectives of those involved in or affected by the graf scene and let them do the talking.

On social media, I asked for ideas, content, articles, anything that might have direct quotes from people that were connected to the scene. I found plenty. 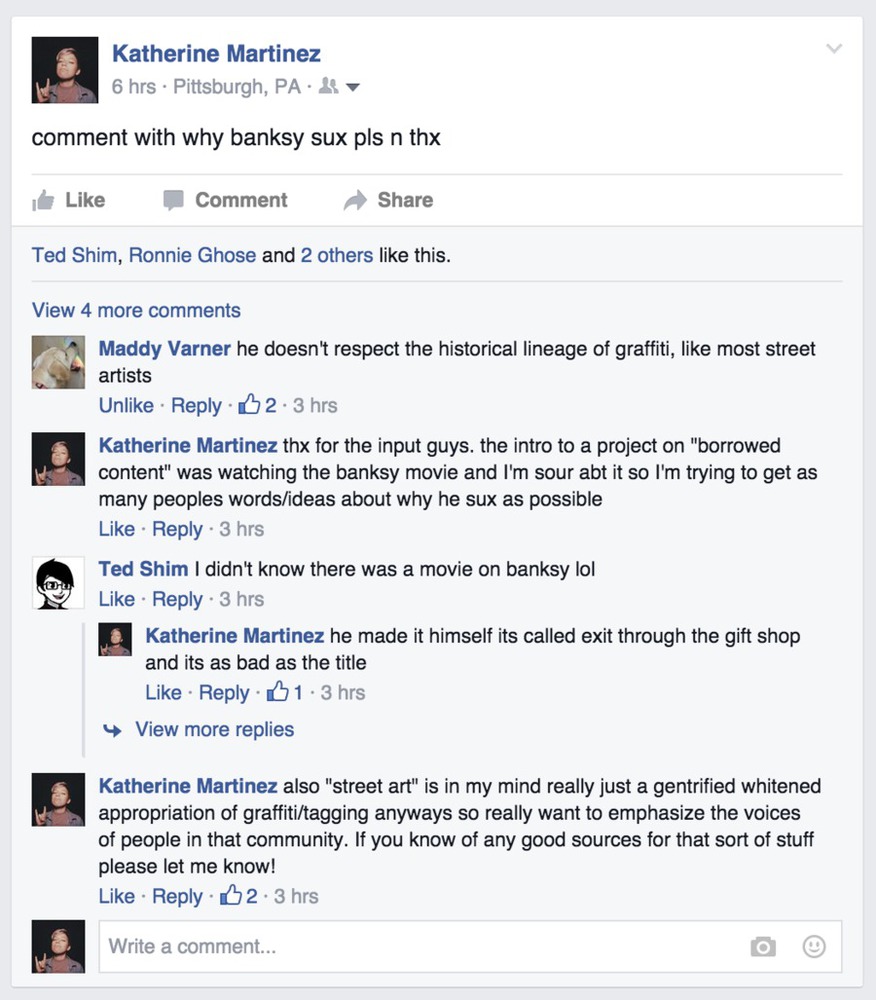 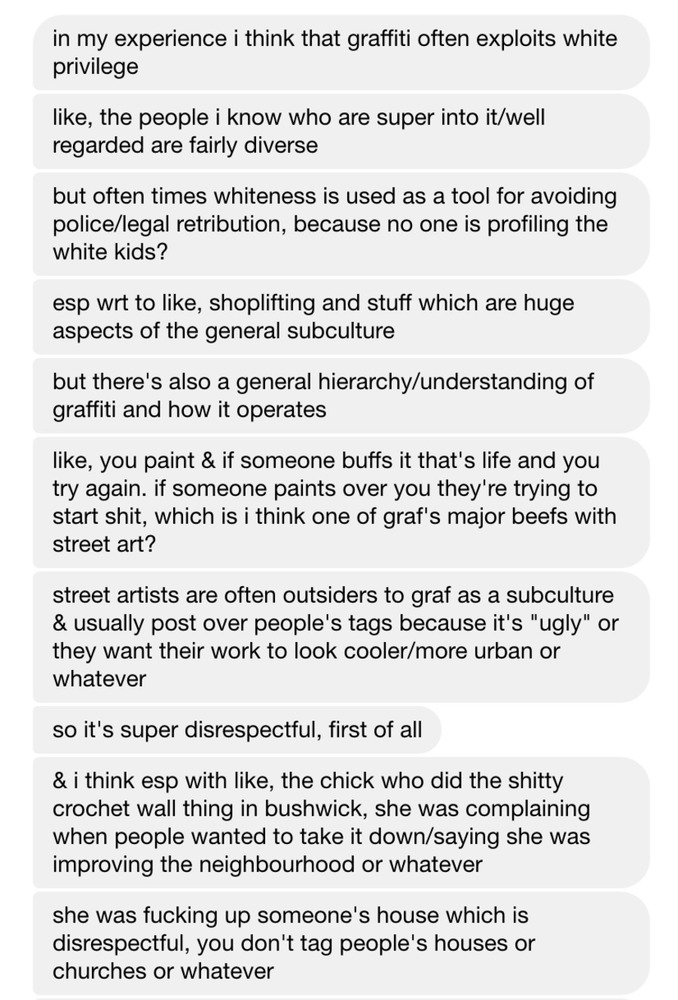 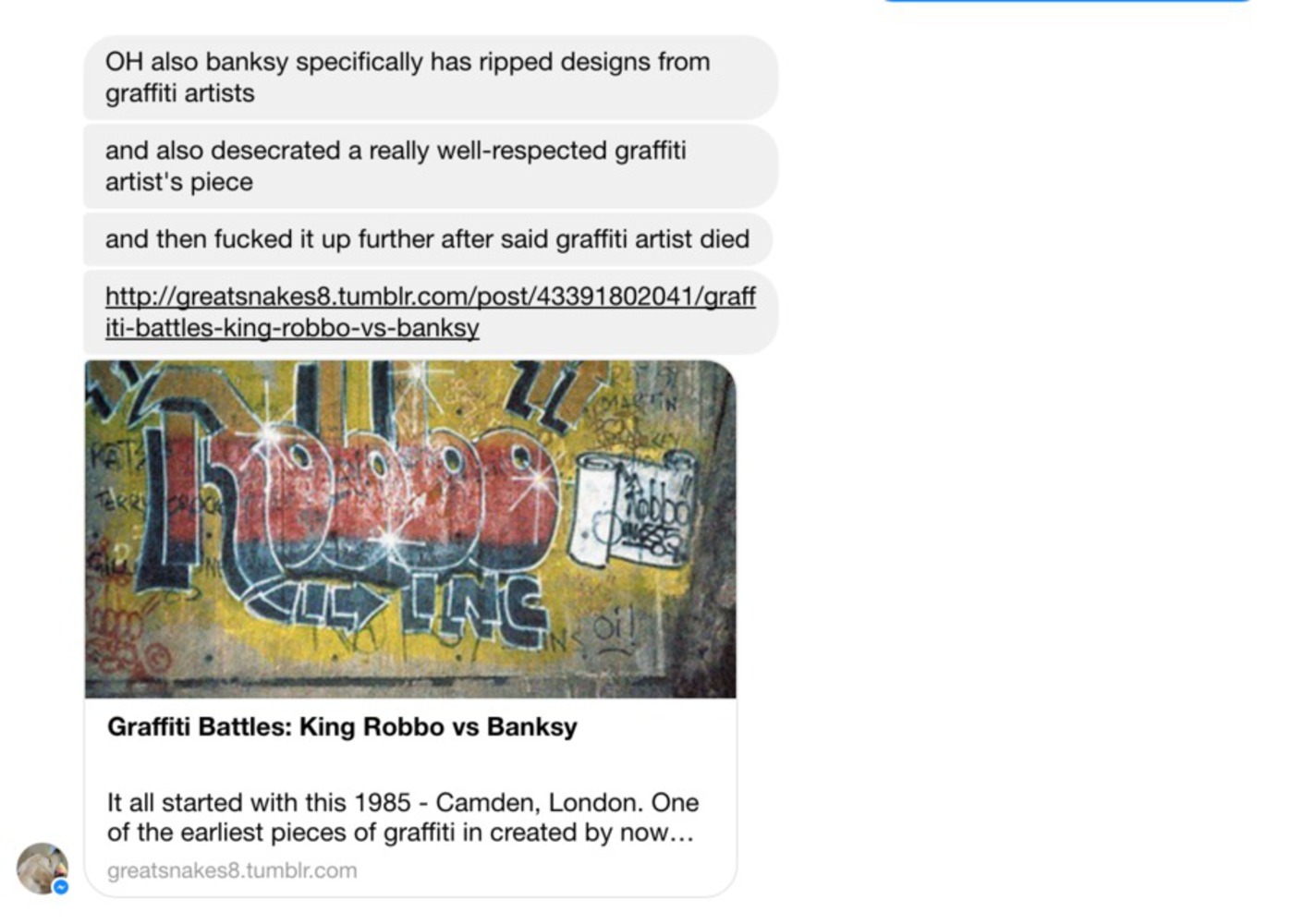 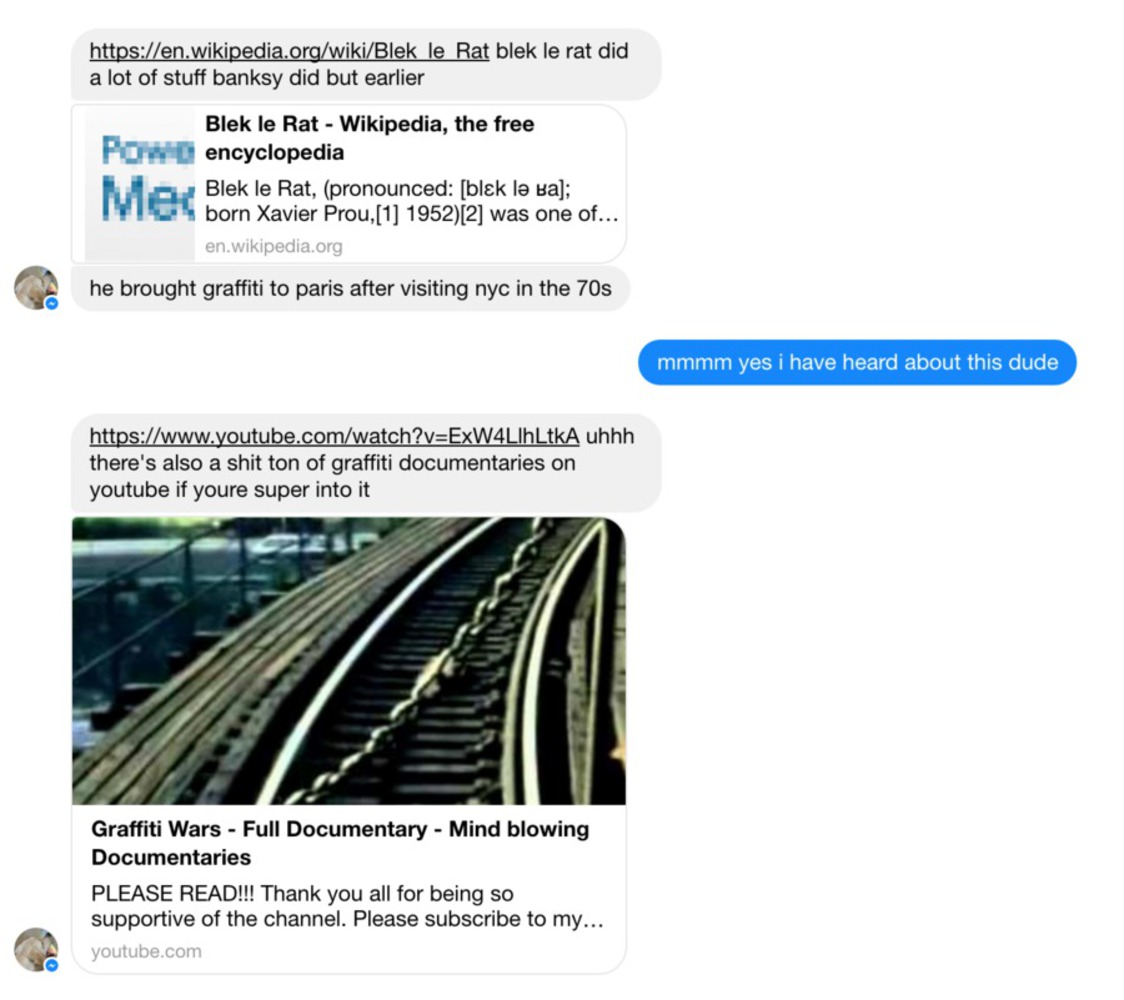 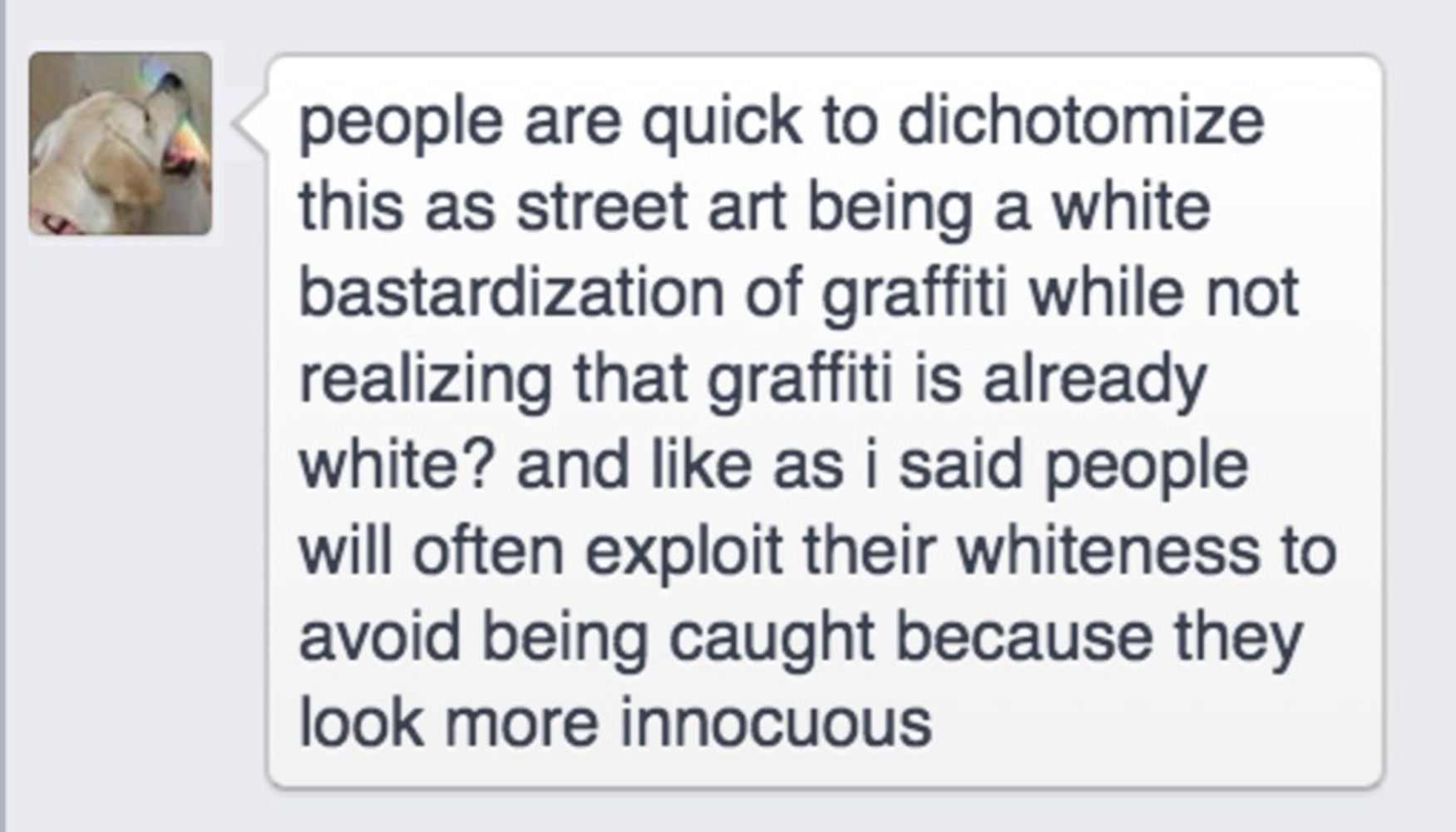 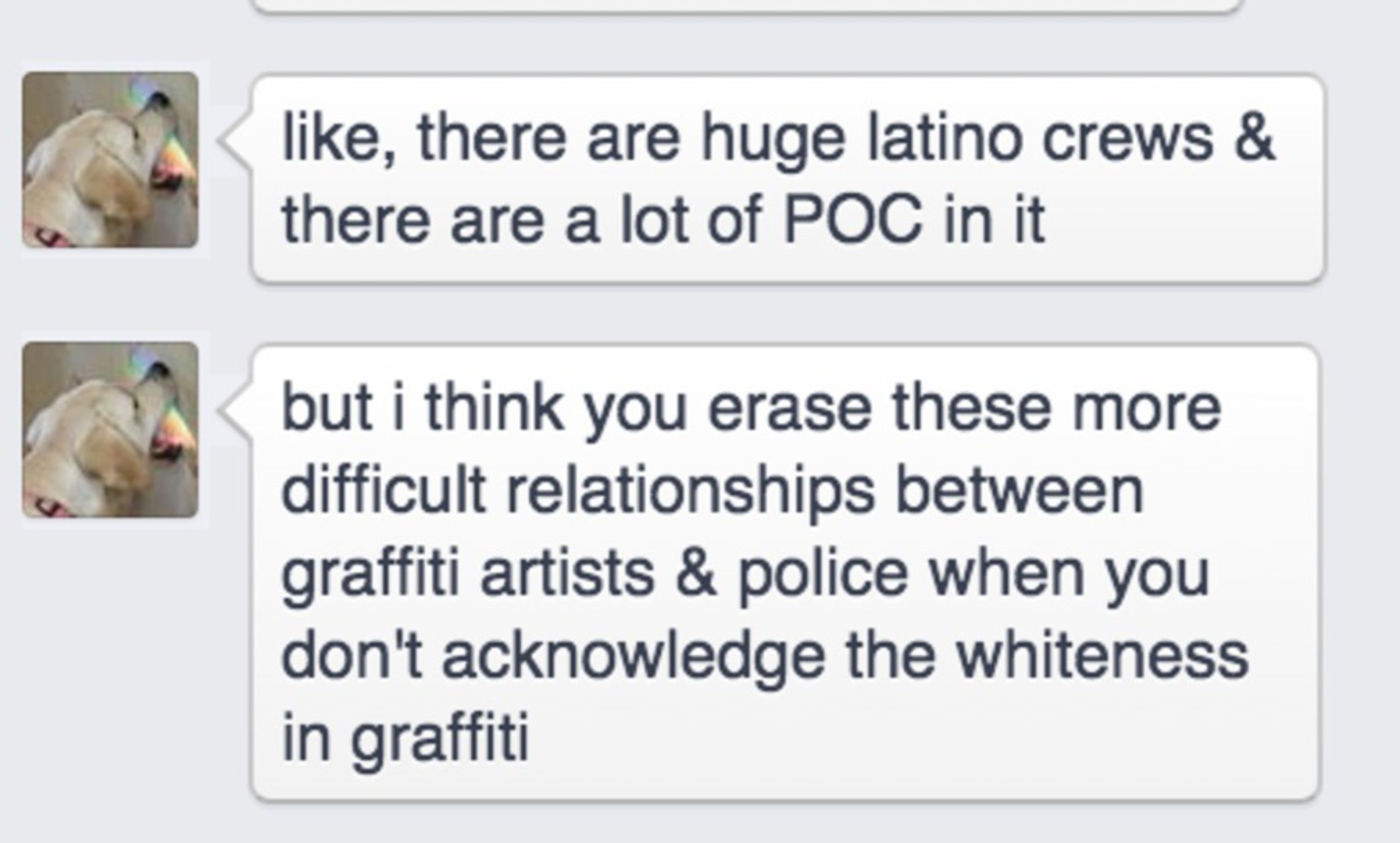 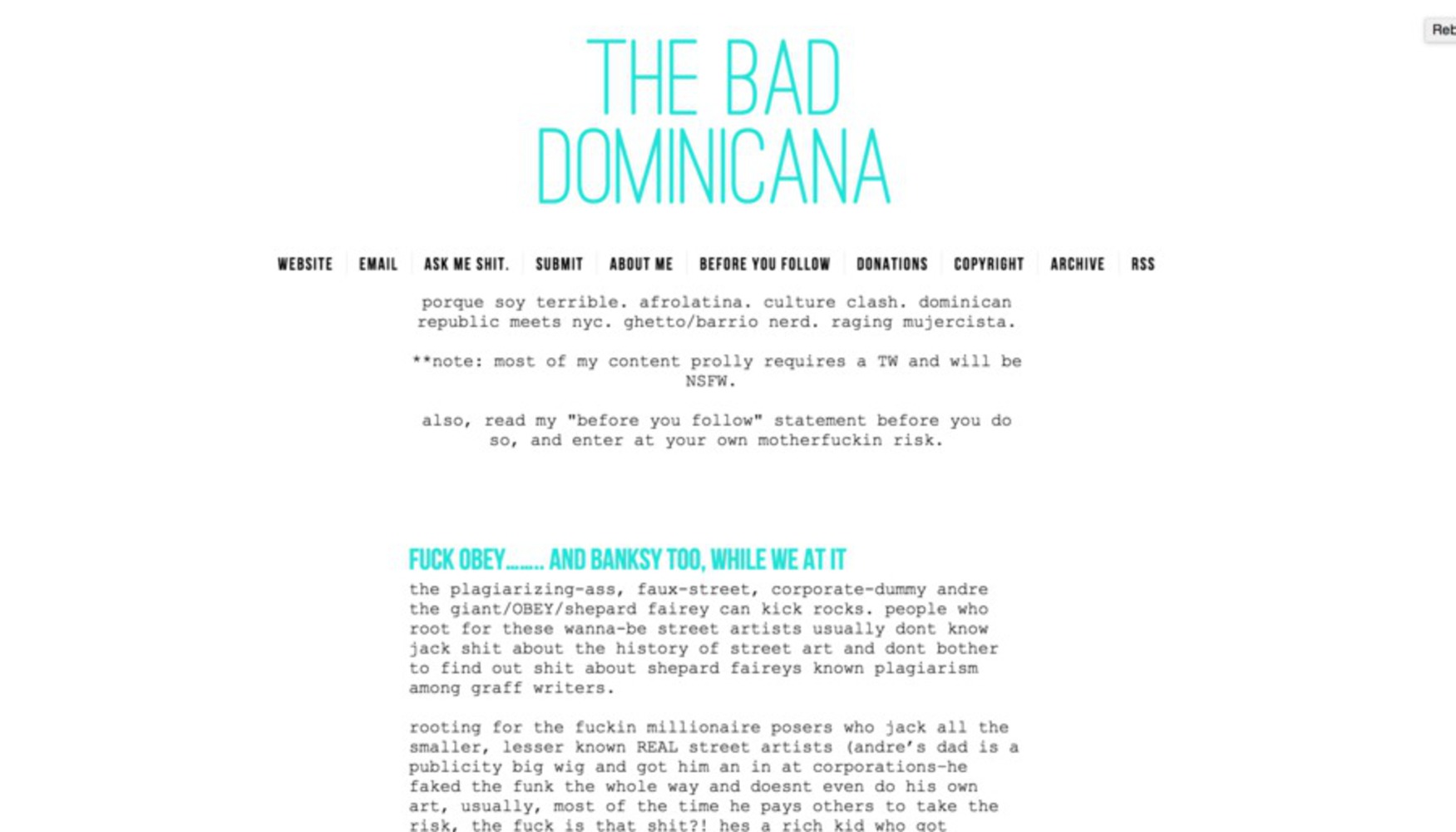 Like Holzer, I think that pure words are enough to convey my meaning. Like the Guerilla Girls, I want to highlight the hypocrisy and of the art world in a dramatic way in the hopes that it helps spark a change. I sought quotes that seemed the most telling of or emotionally reactive to the current situation.

After accumulating quotes, I edited them very slightly to either convey meaning more forcefully or fit the canvas more appropriately, but the changes I made were very minor. I bolded words that felt particularly meaningful or poignant. Finally, I made sure the colors were vivid and contrasting so that they would stand out visually. 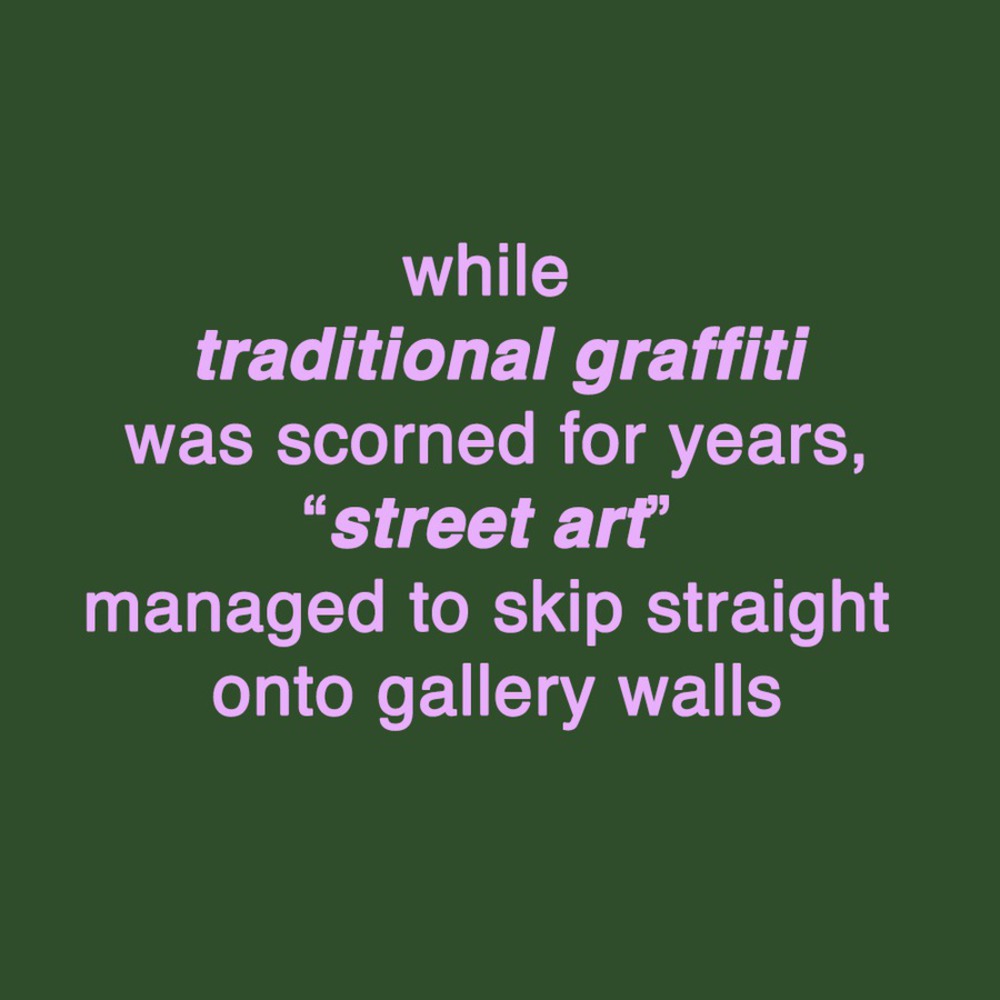 0
The moment they call it graffiti - you're screwed. 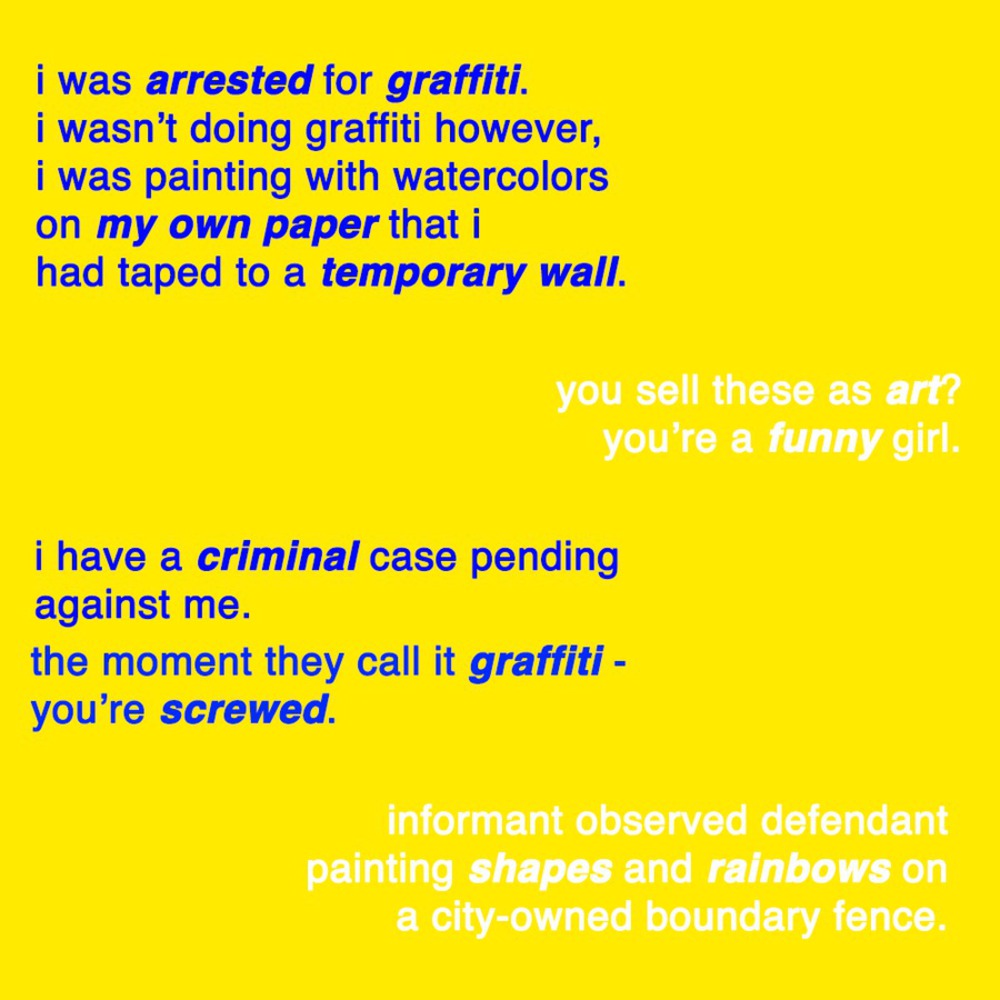 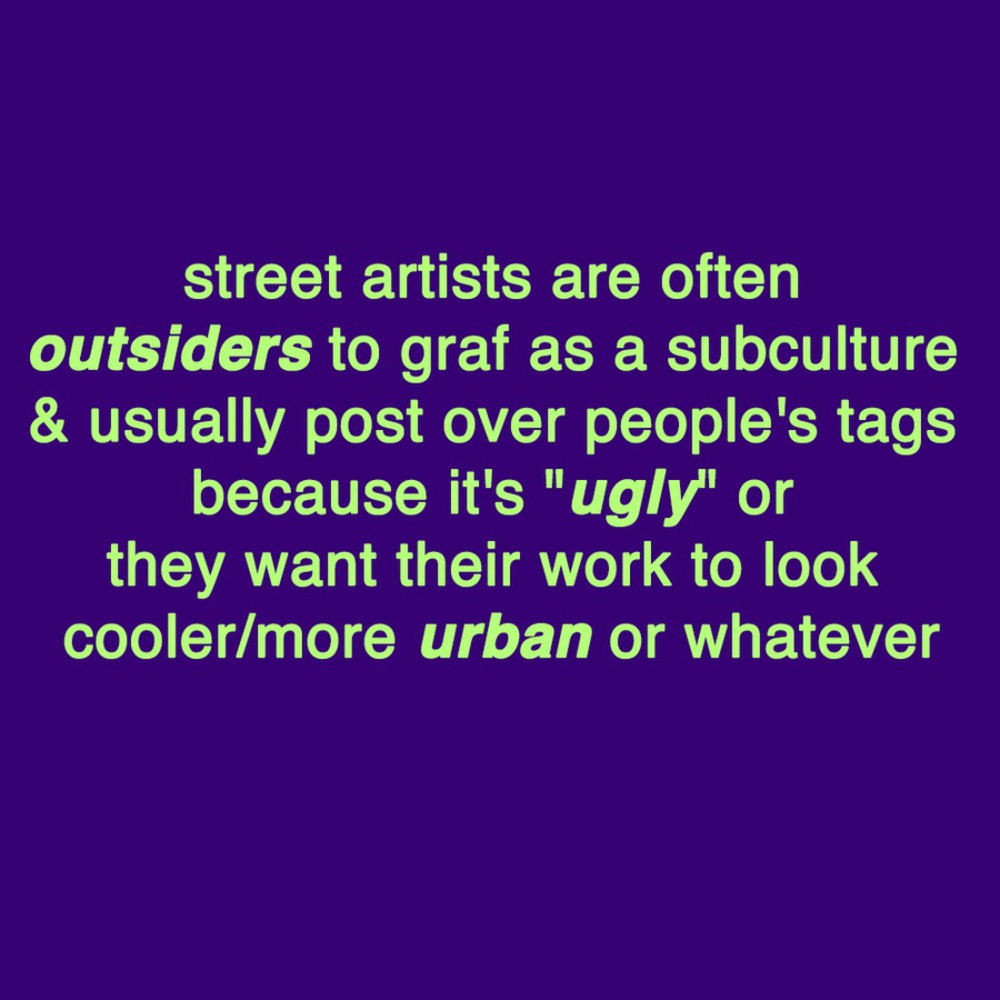 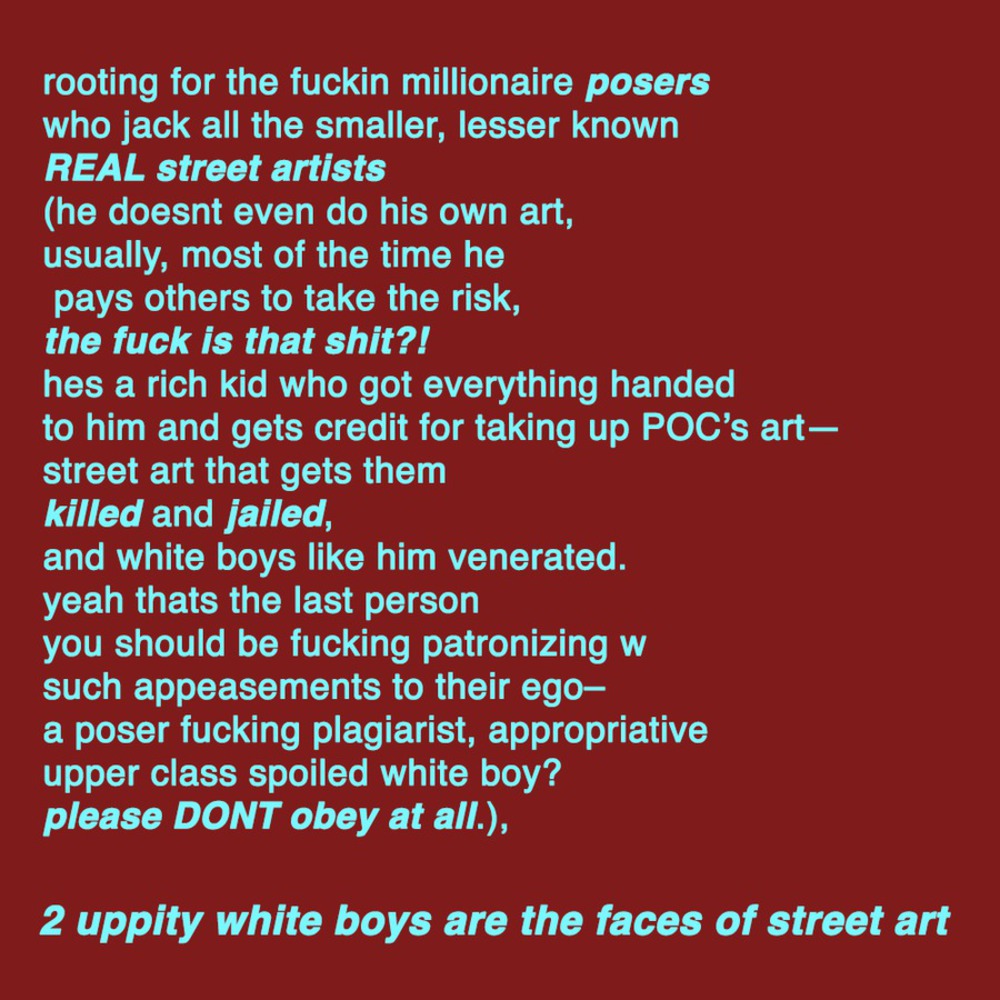 0
the beginning of a graffiti revival 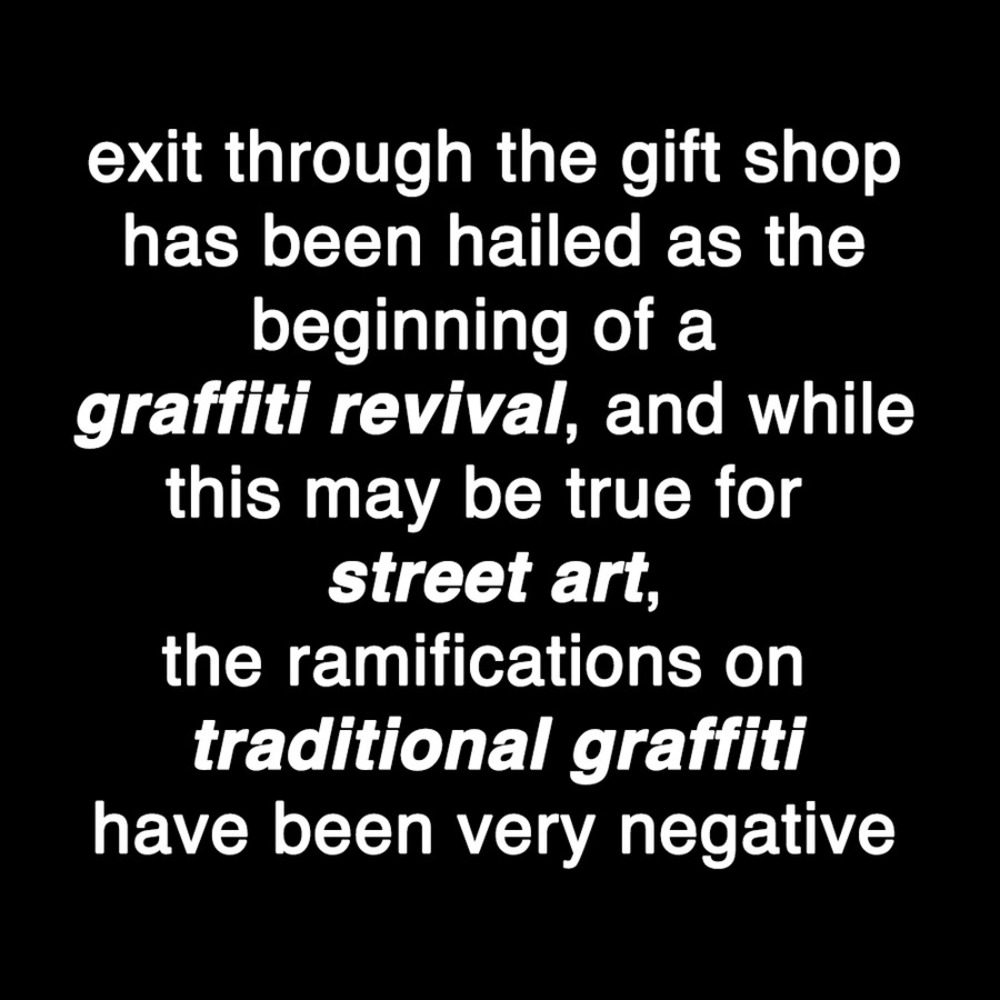 0
it's art when white people do it 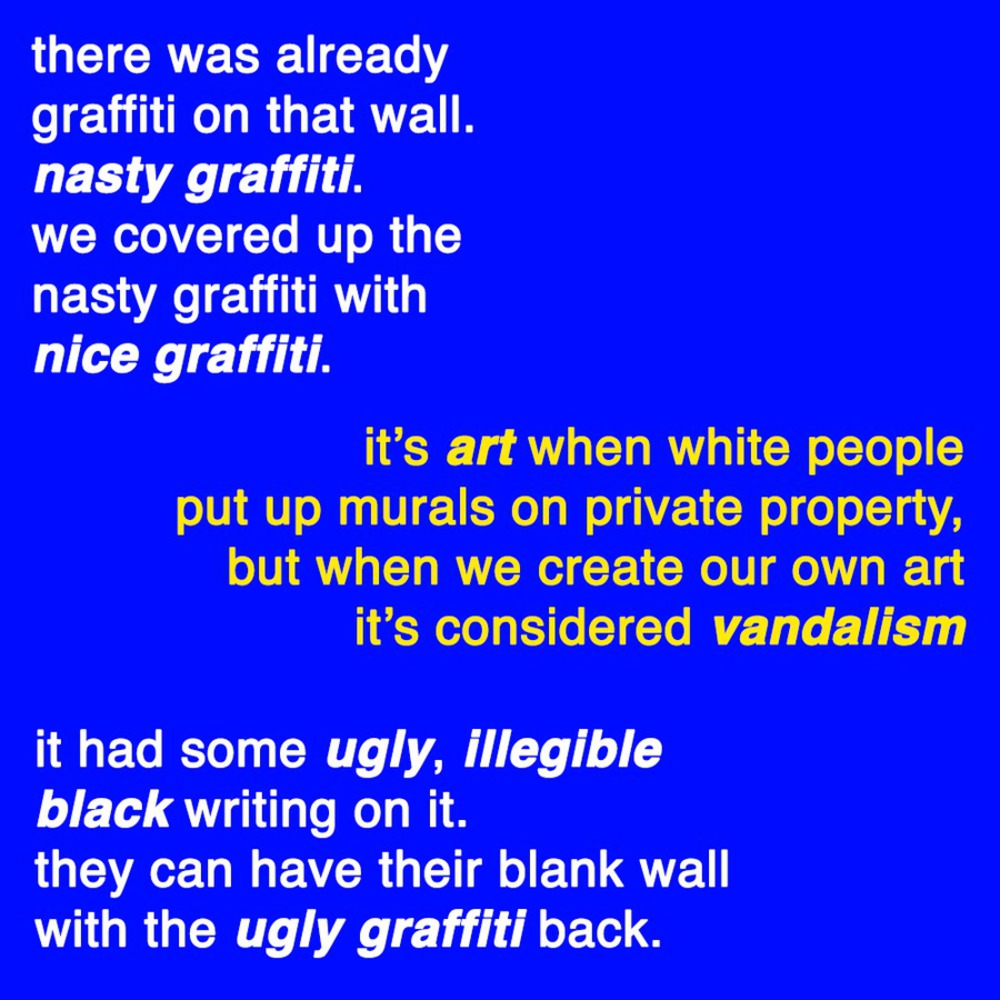 I feel like this work strongly conveyed the experiences I hoped to convey, though I'm a bit iffy about some of my color choices, particularly the white text on yellow background. I was quite pleased with my first view of the work, and though my documentation has gone through a few iterations, I think the full experience accurately expresses the message I was sending. Whether or not someone would purchase this would depend on the context in which it was being sold - ideally I would envision this product being sold as stickers or small posters that could be proliferated throughout an urban area. While this raises questions about involving my work in street art culture, I hope it would be taken as a wake up call rather than assimilated.

I wish I had more text space to elaborate on the ideas I developed over the course of this project, as I found the research very informative and often surprising. My initial reaction stemmed from a personal distaste for Banksy, hence the title, but I quickly found that the street art/graffiti discussion went much deeper than "street art is so passé". I'm happy to have explored this topic deeper as I feel it's a fascinating subject with roots in very human experiences of pride and desire for celebrity and acceptance. However, I wanted to focus on race perception & interaction and the way that people of color are affected by this, which I have a passionate and personal interest in, and I think that I managed to succeed in that respect.

Here's some additional content used for my research, but not included in the final work.

Style Wars (1983) - A documentary on the NYC graf scene in the 80s, really reflective of the lifestyle and cultural backgrounds involved in graffiti.

Here Comes The Neighborhood, Ep. 6 - A more modern perspective, the founder of a particularly notorious NYC graffiti crew discuss graffiti versus murals/street art, among other things. (safeness for work is dubious)

The Vice Guide to NYC Graffiti - An up-close and personal look at the not so pretty parts of graffiti culture. (safeness for work is VERY dubious)

JA... - A profile on a prominent white writer from a well off family, showing the wide range of cultural background.

Hey, I think you did a great job with conveying your thoughts and feelings on the matter at hand. It was very well-expressed, if explicit. I think actually your use of quotes, despite the wording, gives off a very genuine feel, and I think it is very relatable for the people who do graffiti and have problems with "street art". However, I find myself agreeing with Azer that this might actually alienate a large audience portion, specifically the white middle to upper class. Because you use strong words that specifically target that audience as being over-privileged, that audience is not likely to give much stock to this type of art. Definitely people with neutral or similar opinions I think you love your artwork, but I don't think it would change the minds of too many of the white middle-upper class audience, who are really the ones I think you are trying to talk to. I really love the set-up by the way. It really explained why you were making the artwork, and really helped me understand why you used such strong language and contrastive colors in your works. I think the best and most important part of your piece is really the introduction. The art itself was very simple, crisp, concise, and the techniques you used, bolding and italisizing certain words for emphasis and using different colors to express different opinions and the type of feeling exhibited by the speaker was brilliantly elegant I think. The simplicity of your work makes it simple to say, put on a T-shirt to display or share with others. I think that your best works were the ones with fewer words though. Reading through the paragraphs of conversation, while illuminating, is not quite as attention-grabbing as a couple of sentences with emphasis on a few words that pop out. All in all? I think with was a wonderful work! Good job!

Use the words and work of POC to show the ways they're affected by the embracing of street art and increased criminalization of graffiti.