Optical illusions has always been a curiously fun and dizzying experience for me.

One that has particularly caught my eye is the "moving image" optical illusion, also known as illusory motion, where an static image appears to be moving due to cognitive effects. A lot of these images work based on your peripheral vision, resulting in something called the periphery drift illusion (PDI).

Note that when you stare at one spot, that one spot stays static, but everything around it (everything in your peripheral vision) appears to be moving. This is due to rapid eye movements or blinks and changes in lighting that trick the periphery into perceiving motion when there isn't any. Since motion is perceived in a dark-to-light direction, the images will move accordingly.

In other words, the image will appear to be moving if you don't look directly at it. This also explains why this illusion doesn't work as well on small images because then there is not much in your periphery (so full screen these images and look to the side for the full effect!

The periphery drift illusion was first documented by Jocelyn Faubert and Andrew Herbert in 1999 in Perception, a scholarly journal. Since then, acclaimed Akiyoshi Kitaoka, a Professor of Psychology, renowned for his optical illusions, has accumulated a great amount of designs over the years and really popularized this illusion. One famous example would be: 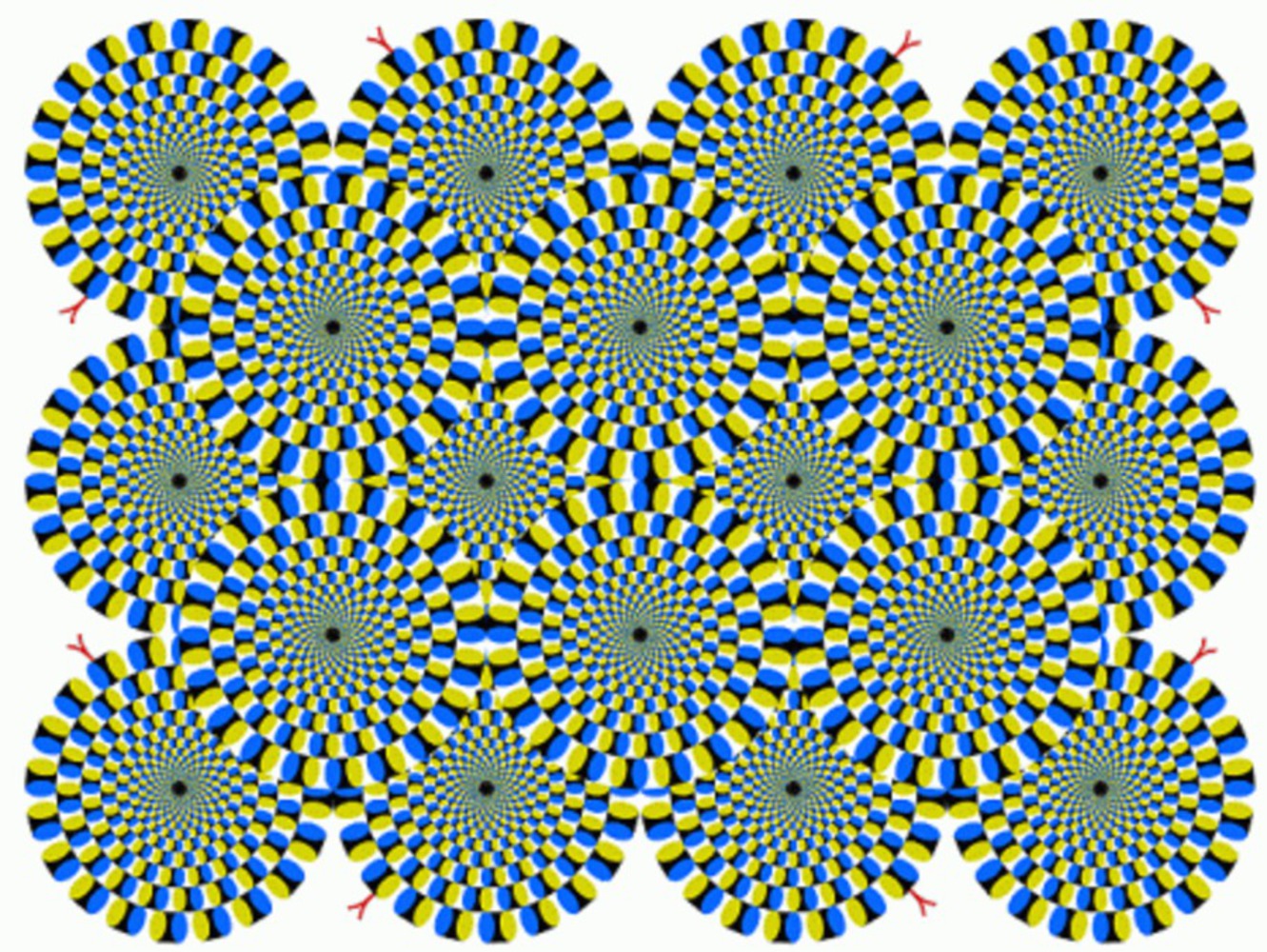 Because of this dizzying illusion, though there are plenty of examples of designs that utilize this effect, it is quite hard to find any "real-life" examples.

Still, I somehow managed to find this ingenious anti-drinking-and-driving poster from Mumbai. At first glance it seems normal, but look again...do you see it? 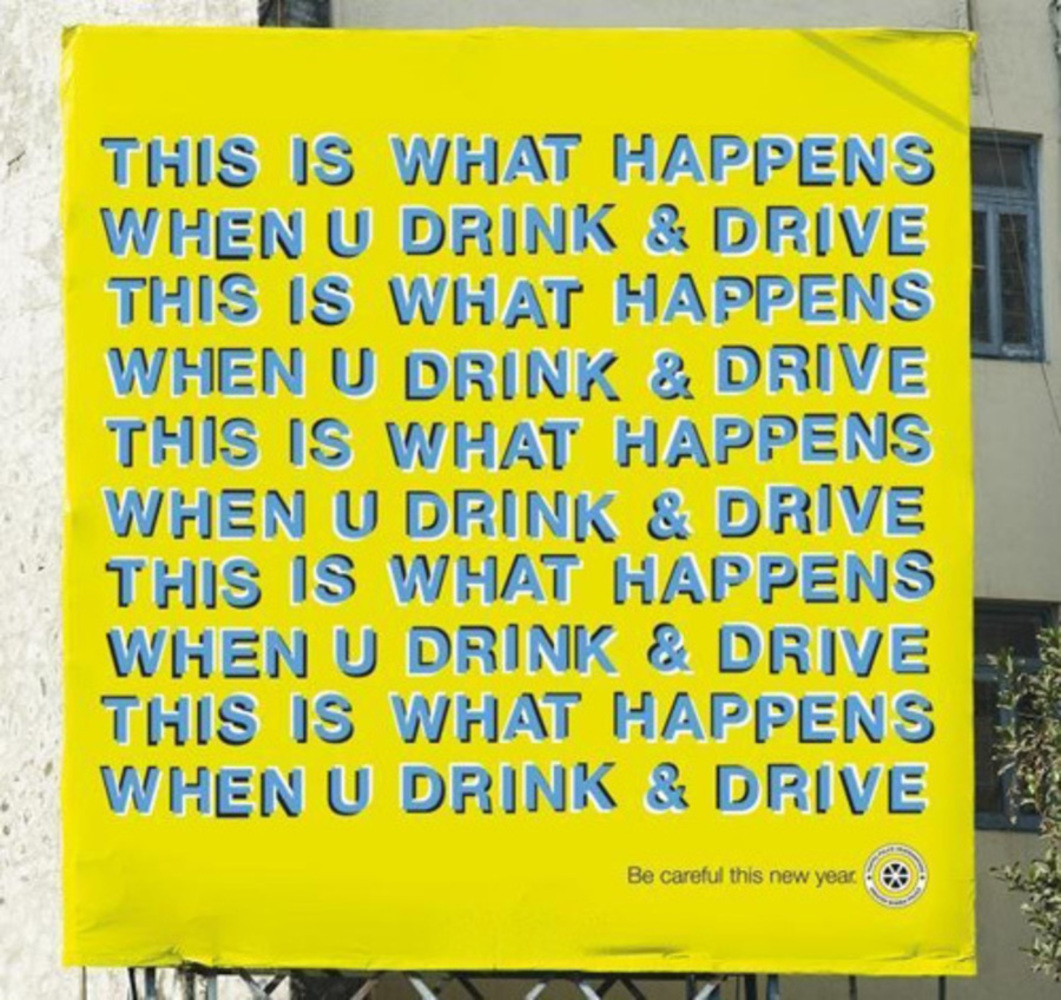 Once you get it, it certainly does give off a strong message, aside from what is evident.

This poster is a variation on other illusions (if you look carefully you can see the alternating black and white back-lettering), which are commonly found in Kitaoka's designs. Since motion is perceived in a dark-to-light direction, our periphery is tricked as we look over the image its luminance changes.

I really love how this poster was used to create a powerful message. I am really curious to see how else this periphery drift effect could be used in real-life applications.

Akiyoshi Kitaoka is famous for his moving image illusions. He has amassed hundreds to thousands over the decade and posted them on his site, which is definitely worth taking a look at: http://www.ritsumei.ac.jp/~akitaoka/index-e.html (warning: it gets kind of trippy after a while).

Below are some of my particular favorites: 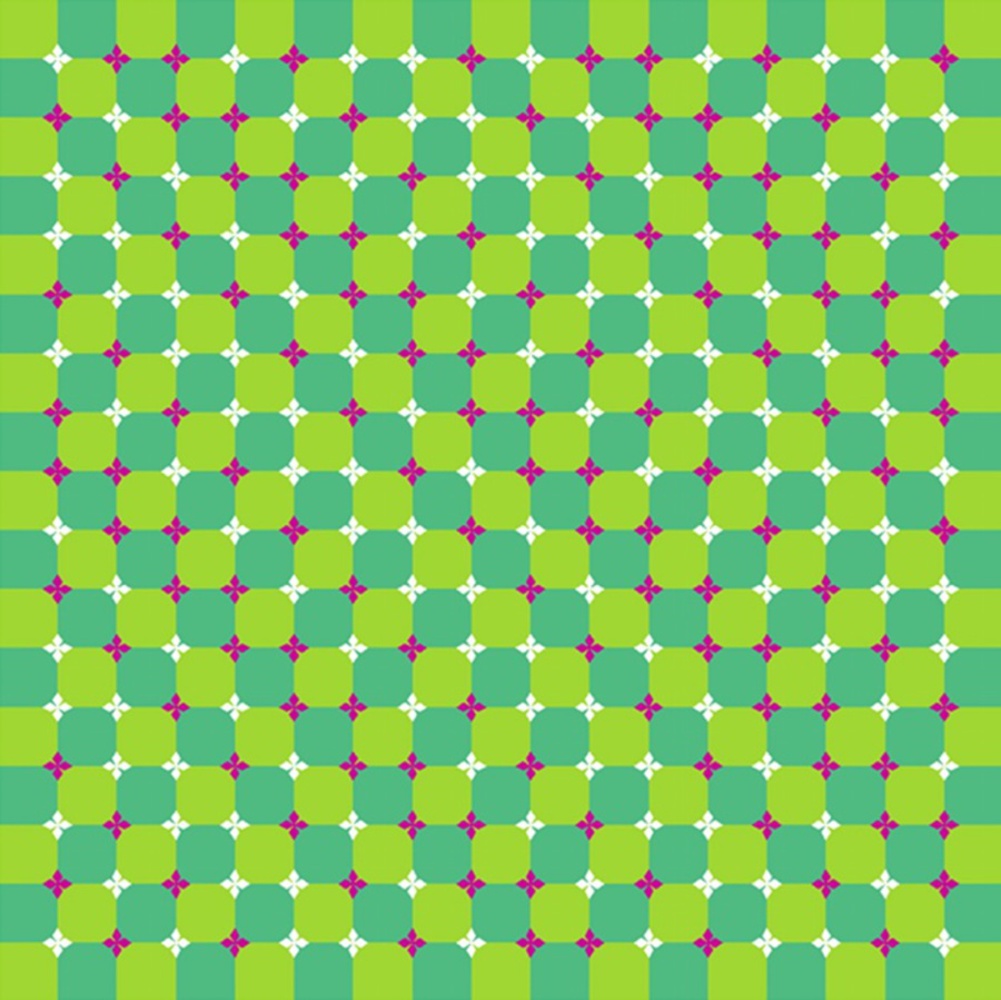 I love the theme of this. I know it's called Primrose Field and I really love the flower accents, but I keep imagining a rice water paddy with lotus flowers on it. The way the image seems to wave is kind of soothing to me and reminds me of the way water moves when fish swim underneath it. 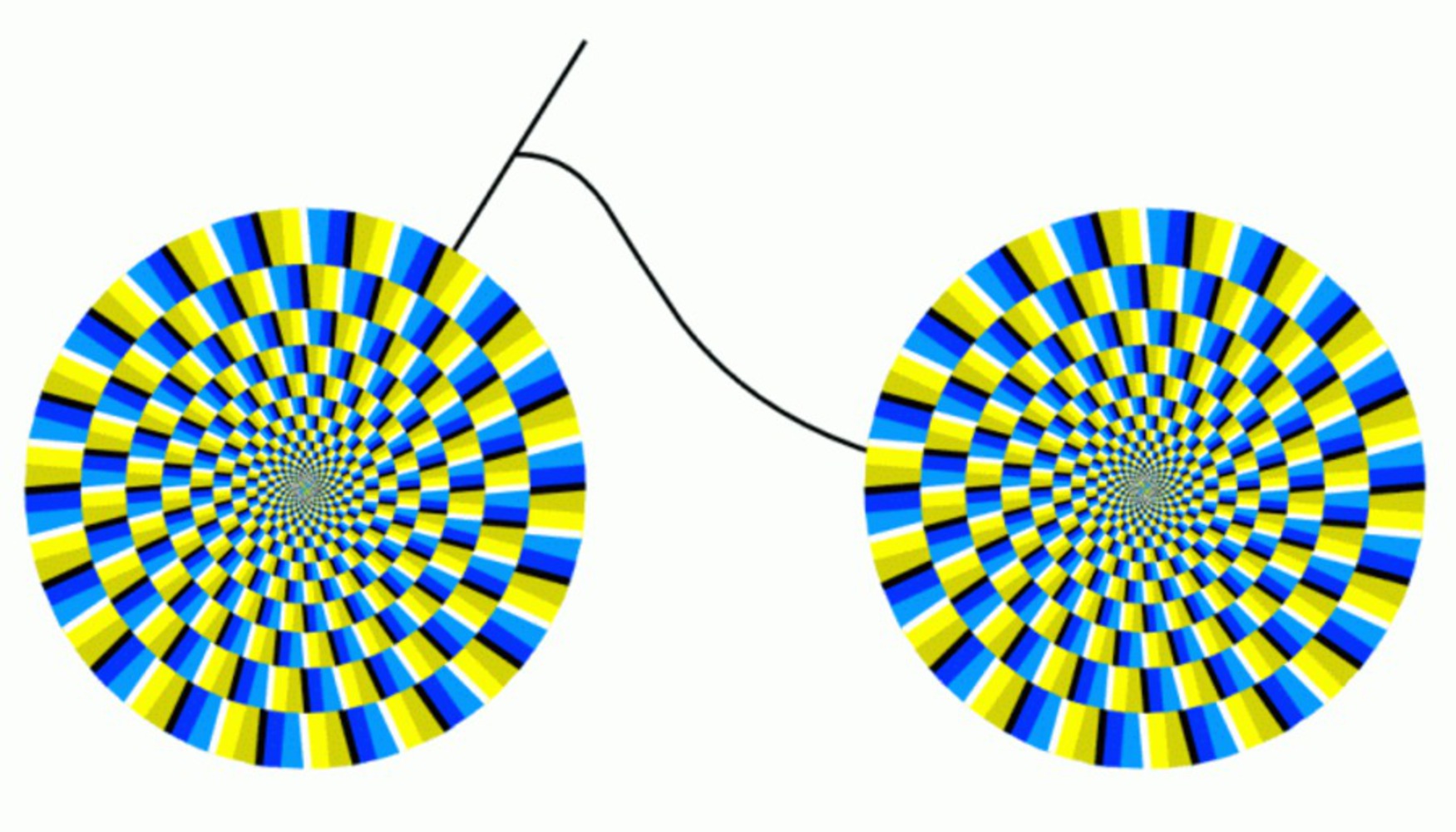 This was hilariously simple to me. It's just a variation on Kitaoka's Rotating Snakes, but then he exploited the circularity of it to make them wheels! The simple lines as the bike are so classic, just like the tiny red lines on Rotating Snakes as their tongues.

Aside from creating a rotating effect, which there are many versions of on Kitaoka's site, this periphery illusion also has other variations. This one is particularly maddening and IT NEVER STOPS. How fascinating!

(Unfortunately I really couldn't find the original creator of this image and I'm really disappointed at that because I would love to see other creations.) 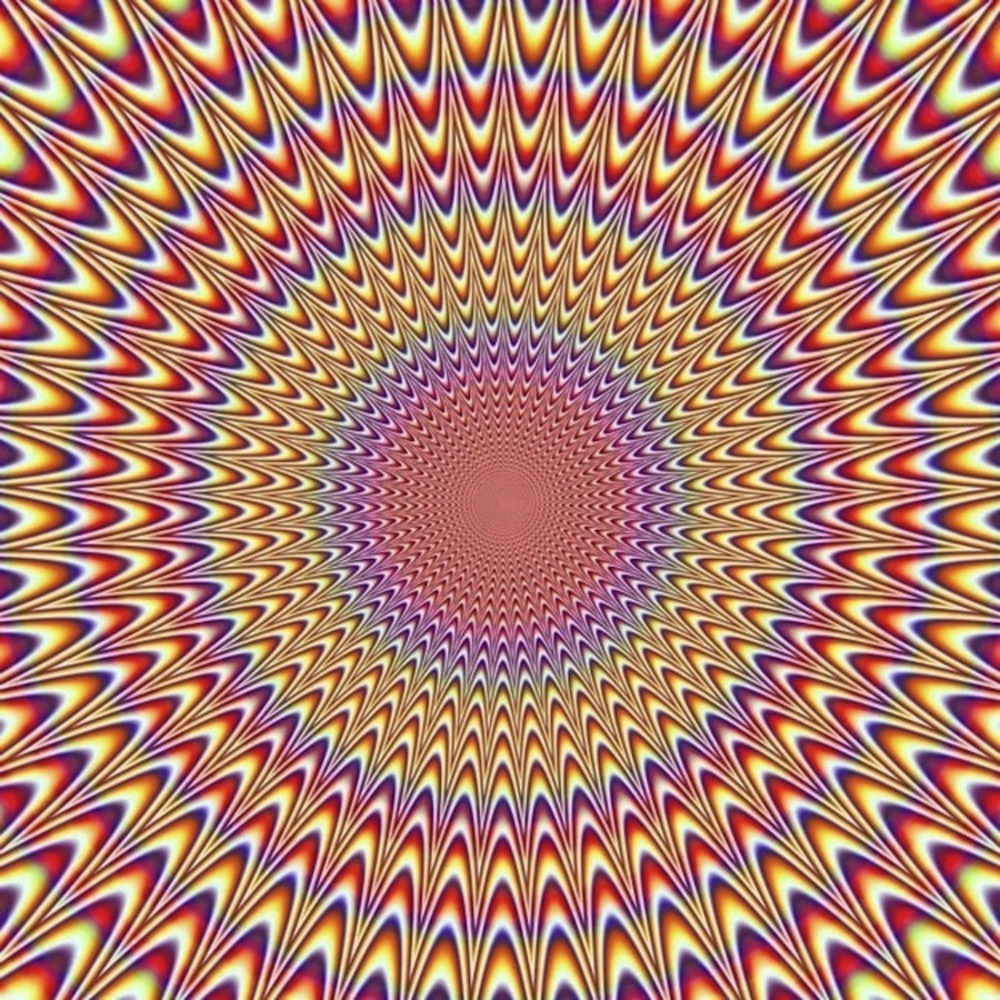 I read somewhere that this throbbing effect is sometimes used in billboards to make the text look like it's flashing, but I'm not sure how accurate that is, though it seems plausible. (Then again, with technology nowadays, I'm sure the text is probably just actually flashing.)

I learned how powerful illusions could be. There are so many different variations and after staring at so many for so long I still haven't gotten used to it. I think this will always be a phenomenon that fascinates me, but one thing I wish I could do is find a way to make it more practical, like the poster from Mumbai that utilized it to create a message.

I'm curious to find a way to utilize this trippy effect for something more useful than just an illusion. Perhaps doctors could use this phenomenon to make it easier to explain what dizziness feels like or how motion sickness feels like or something. Perhaps it's possible to use more soothing colors which could create a more calming wave effect which could be used for therapy or something. Heck, just paint the entire thing on a wall in a gallery and let more visitors be fascinated by it or something! Put it on a card or something! (That throbbing illusion could honestly be so great in a Valentine's Day card as a heart.)

I think this illusion is really interesting and I'm curious what potential practical uses it could be used for.

I love these illusions! It's pretty interesting to see the differences in the illusions, in digital form, when I scroll by hand on a touch device and when I scroll; without the smooth touch-based scrolling, the page jumps in increments as my scroll wheel clicks, creating a much different sensation than a gradual movement.