Made by Roberto Andaya · UNLISTED (SHOWN IN POOLS)

What if you had the ability to change your emotions at your own whim. Want to feel angry or sad? Or maybe you don't want to feel any emotion at all. If we recorded your body temperature at certain points when you felt a certain emotion, we could then reapply that emotion by trying to mimic that temperature.

To see how easy it is to influence and cause emotion. Is the brain able to be hacked through sensory components around the body instead of just the brain directly? The goal is to build a heating and cooling jacket able to cause an emotion by heating and cooling a person. This could then be correlated with location and how a certain place can bring a memory of an emotion.

The prototype utilized 5 fans as a method of cooling. Two for each arm and one on the lower back. Heating elements were sewn inside on the upper back and shoulders  in order to heat up the users body. The control system was a particle photon so that it could later utilize the online functions it possess. Multiple batteries systems were used to power the different pieces of equipment. If more time were given, then location would cause the certain emotions on the person by utilizing the functions of a photon. 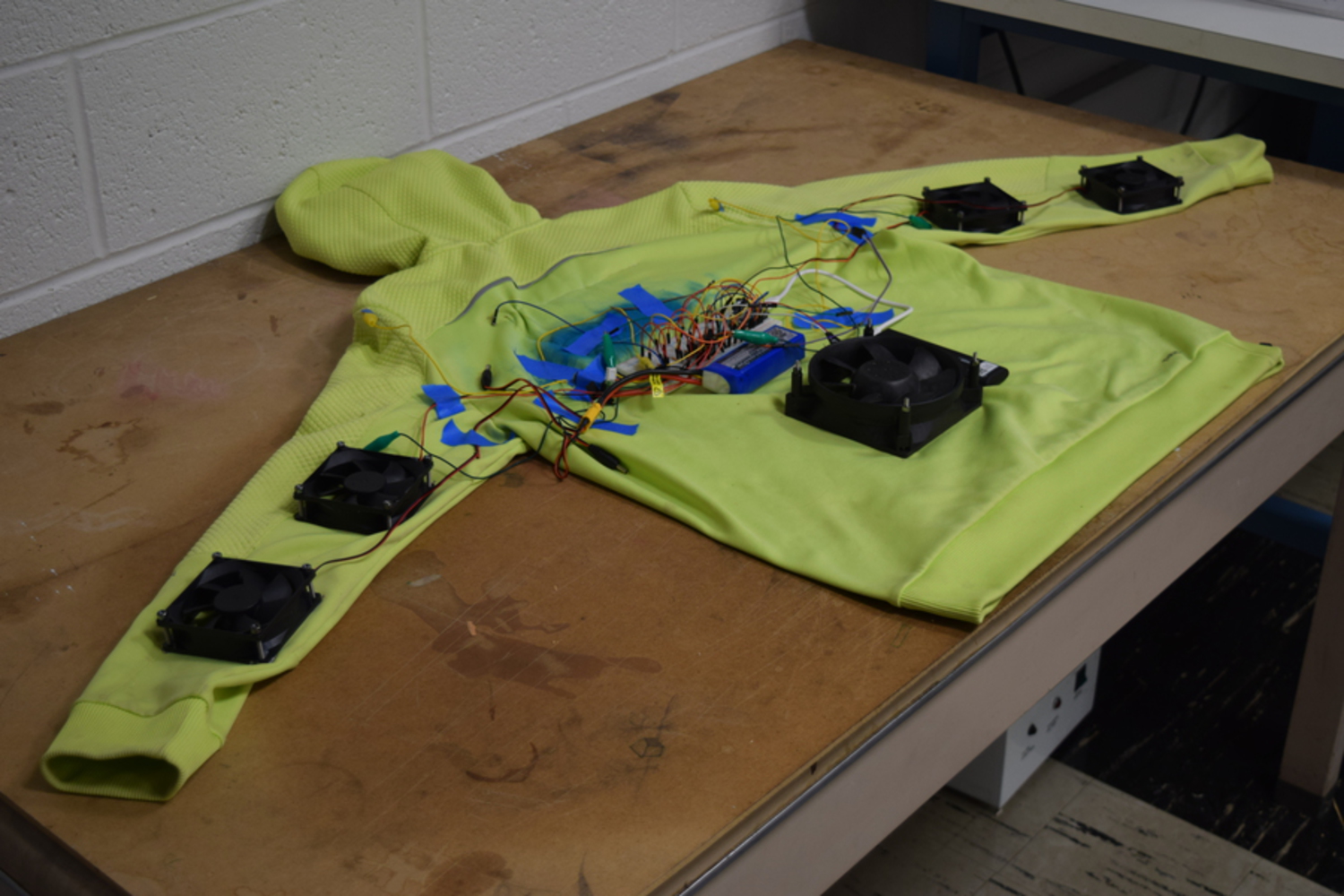 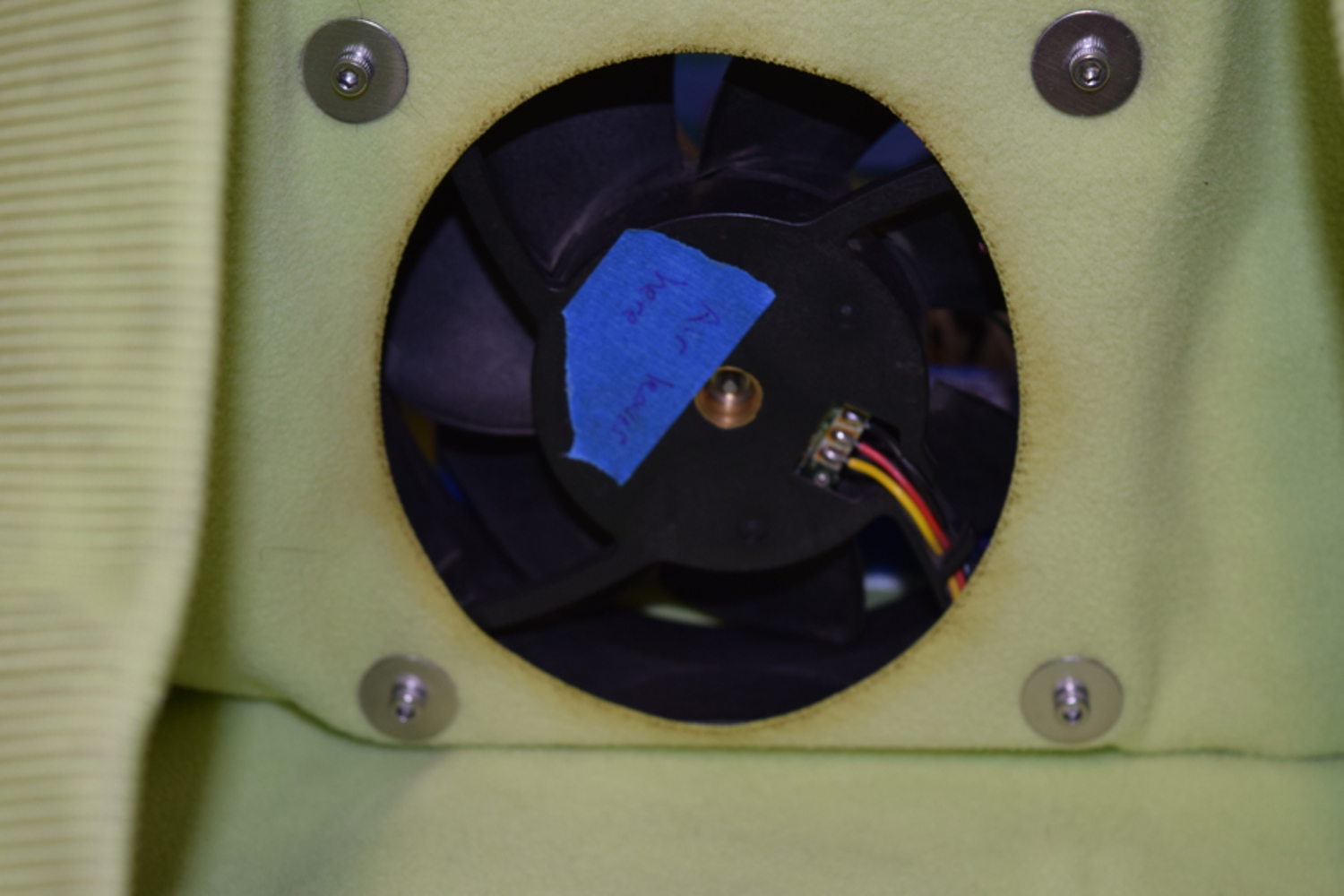 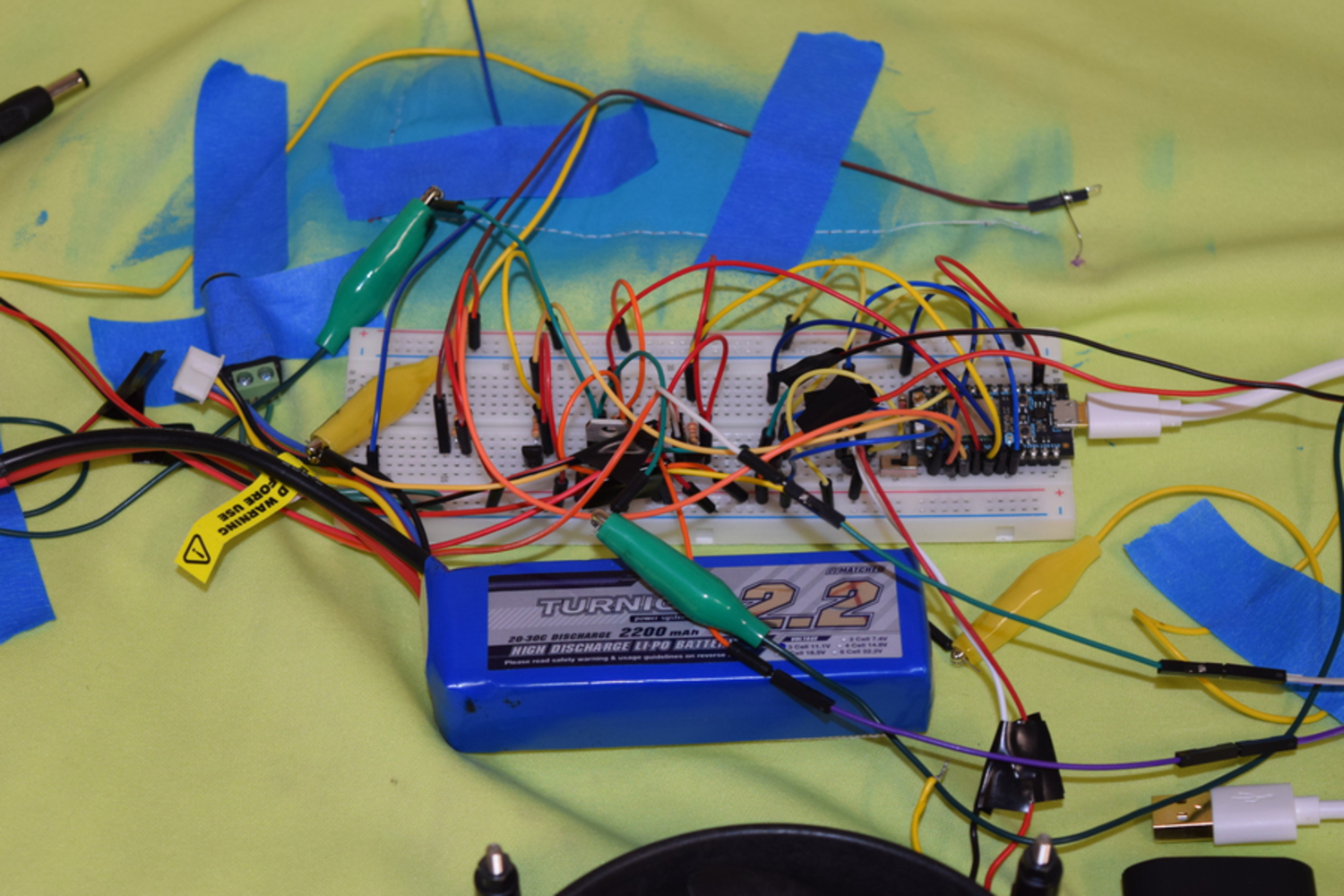 The main ideas that influenced my work was a research paper done by the National Academy of Science: http://www.pnas.org/content/111/2/646.full . In it, the researchers explain their work with emotions and how body temperature is effected. They were able to measure these temperatures and find that an emotion would change body temperature but not evenly throughout the body. The arms, torso, head, and legs, were all defined regions that would change depending on the emotion.

The paper created the knowledge but our Responsive Mobile Environment class sparked the idea. We did background on memory and saw videos show current research. The one that most of my interest was scientists hacking a mouse's brain by engineering his DNA and giving it implants. This allowed the mouse's emotions to be controlled electronically. With this I thought to myself, what could I do to hack the human brain.

Being a mechanical engineer that has a lot of heating and control system knowledge, I felt that I could create some sort of contraption that could emulate body temperature. Maybe controlling the body temperature can then influence or create a person's emotion like the mouse experiment.

Locations having certain memories to a person is also an idea that could be paired with the emotion immersion system. The location is the cause and the heating/cooling system is the effect.

The main idea was always known, emulate an emotion onto a person. The only real way to do that based off my skills and knowledge would be to heat and cool a person. After I defined that I knew that the best techniques would involve heating elements and fans.

The fans would utilize the room temperature and create high convection which would increase heat transfer between the environment and the user. With that the person would feel colder as long as the environment temperature was hotter than their body temperature ( anything above 97F).  The jacket was laser cut with holes to make space for the fan's air. They were controlled by transistors with the photon micro-controller.

The heating elements were far more complicated. I had to consider how hot to heat them and how to make it safe. After using a power supply I experimentally tested different lengths of nichrome, heating wire, and tested to see how hot those temperatures would get. I defined a length and then placed then in plastic bags in a manner that they would not touch and not come into contact with people. The plastic would be thin enough that the person could feel the temperature from the heating element but also resistant from the electricity. 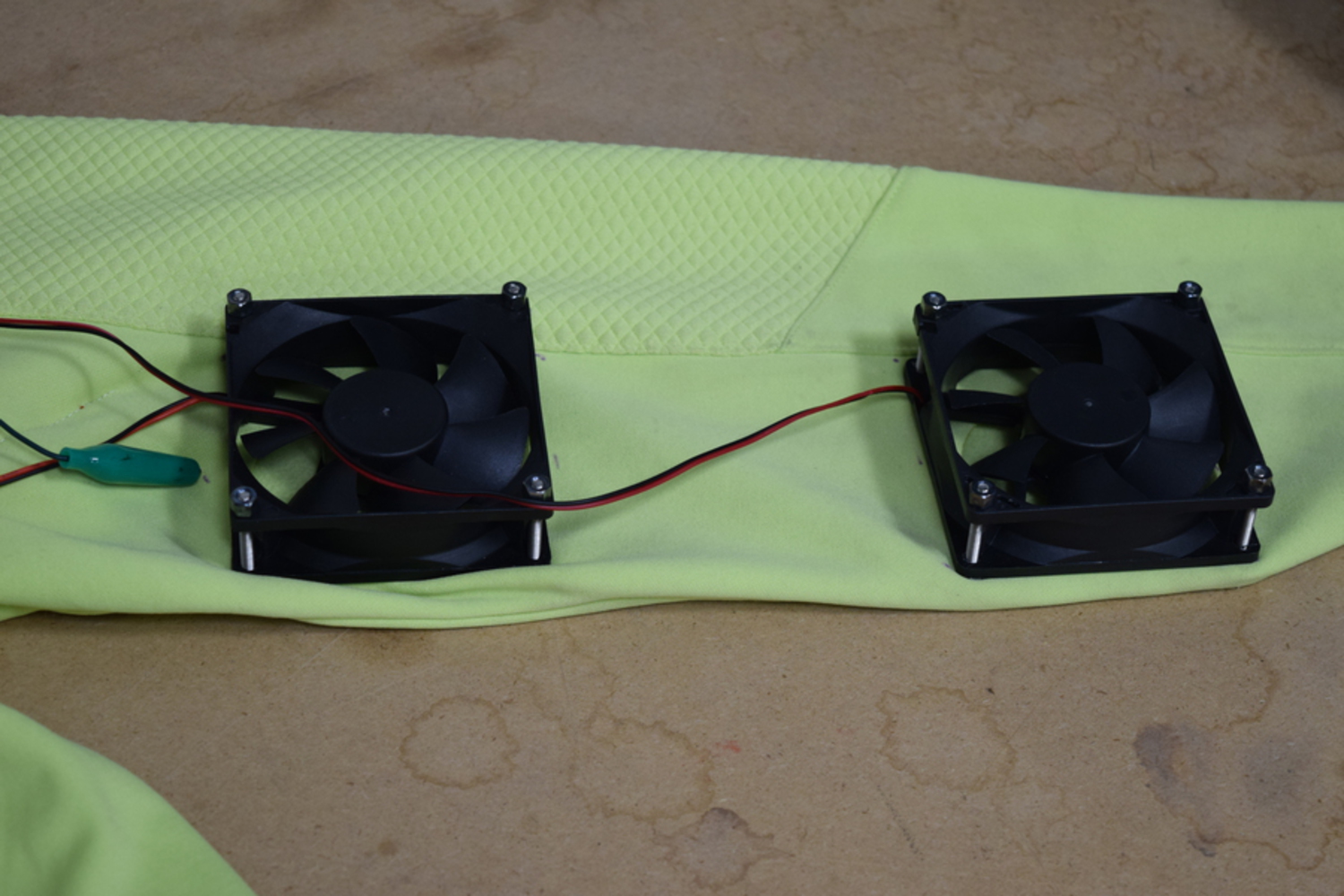 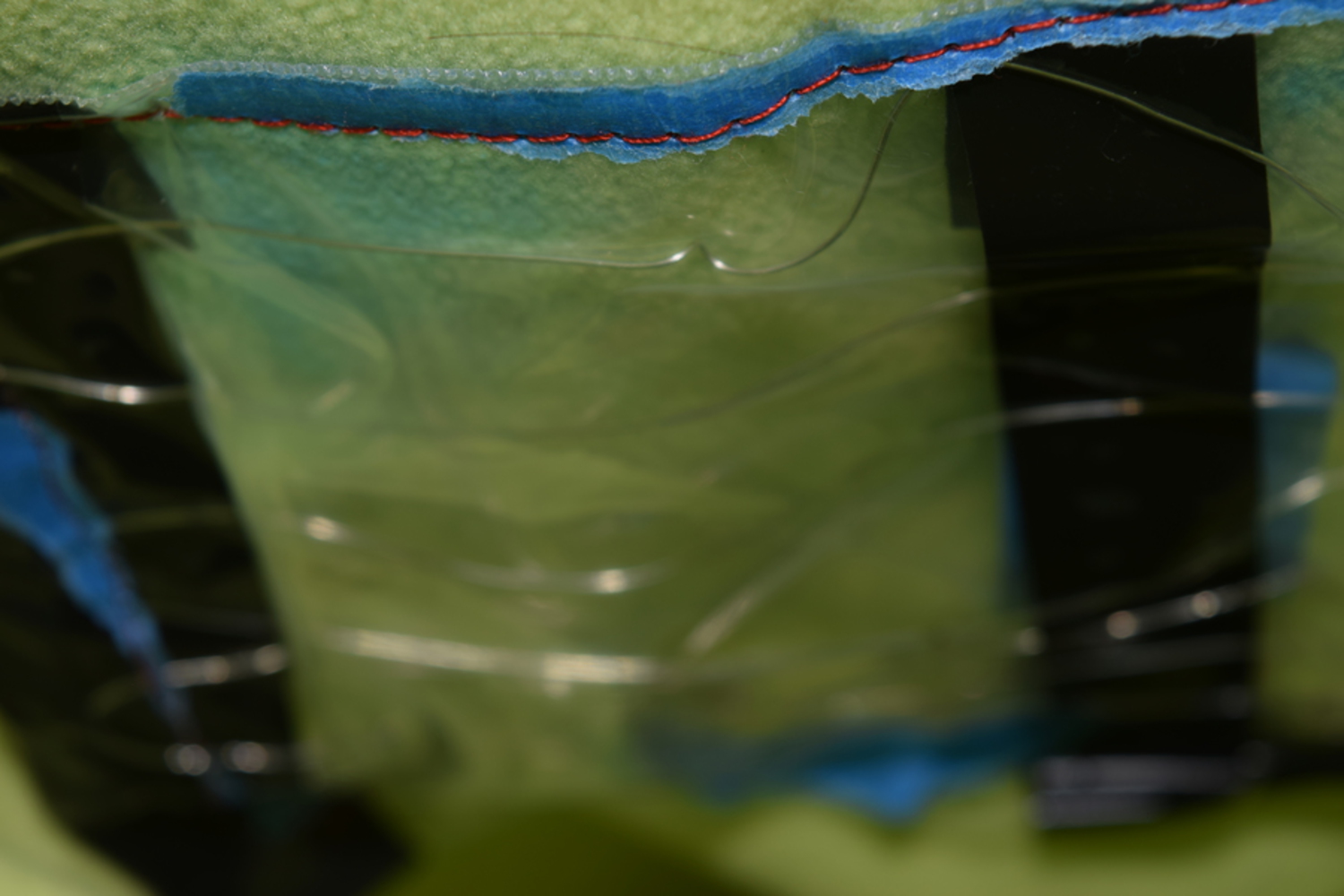 This type of project shows how feasible hacking the mind electronically is becoming, and raises the question of what will be considered too much control?

Can we average out a emotion to a place?

Will this instead of emulating an emotion create new unintended ones where people feel uncomfortable about technology trying to control them?

Do we already have forms of emotion emulators that we just don't consider or are too subliminal?

Reflect on making this project. What did you learn? What would you do differently? Did you get where you wanted to? If not, why not? What do you need to get there, etc?

Over the course of this project I felt like I really delved into the world of memory and the ideas of how to create them or hack the brain. What I came to find was for correlating emotion with memory by utilizing electronics it would have to be in a more subliminal manner that works long term.

The project idea was almost fulfilled but the location based system was not implemented and the heating elements component did not work because of transistor issues. Overall the idea of heating and cooling was able to be conveyed even with only having fans for cooling. To get further I need to fulfill the location and heating system to see how they function as a whole and build off that system.

CMU IDeATe facilities supplied the equipment needed for construction of the project as well as the equipment for the documentation.

What if you had the ability to change your emotions at your own whim. Want to feel angry or sad? Or maybe you don't want to feel any emotion at all. If we recorded your body temperature at certain points when you felt a certain emotion, we could then reapply that emotion by trying to mimic that temperature.