Made by Eunice Oh

Observing different artworks for long periods of time in a museum has become very scarce nowadays with the rising busy nature of people. Most are seen scrambling to meetings classes and interviews and never take the time to place themselves in front of an artistic piece and fully examine the artwork. This assignment definitely helped in realizing the importance of observing a piece of art to receive the full experience that the artist meant to convey to the audience. There is no other way certain details in the various pieces of artwork could have been noticed without spending a considerable amount of time examining the painting in its entirety.

Portrait of a Boy by John Singer Sargent

Sargent started his art career in the late 1800s and grew to become known as the "leading portrait painter" of his generation. Most of his pieces were commissioned by wealthy clients and many traveled across to Europe to have him paint their portrait for large sums of money. His best portraits revealed the "individuality and personality of the sitters" and some even had a few exotic qualities to them. However, as time grew on, he became weary of painting so many portraits and started to shift towards architectural and landscapes subjects. Most critics treated him harshly and with the rise of Impressionism, Fauvism, and Cubism, his work was seen as obsolete and "out of step" with post-World War I Europe sentiments in the arts. With the rise of anti-Semitism in Europe, his works were supporting Jewish prosperity, which could have led to the decline of his reputation. Many other critics stated that his work was poorly executed, being superficial and portraying the "emptiness of Sargent's mind." However, only after his death did his popularity increase with critics acclaiming his ability to capture the emotion and mood of each subject.

The first artwork was a painting titled Portrait of a Boy by the American artist, John Singer Sargent. When examining the picture, the boy is placed in the center of the image, his face being the obvious focus. The light illuminates his facial features the most, revealing quite a bored and uninterested expression on the boy. His body language also contributes to portraying his overall emotion at that moment with his slumped shoulders and crooked way of sitting. As one carefully examines the background, there is a woman present behind the boy reciting something from a book. Judging from the boy’s reaction to her words, it seems as though she is a tutor reciting something that is very dreary and is boring the child. The woman herself is very subdued and hidden from the light source. None of her features seem to be lit by the natural light as much as the boy in the center is. Her presence seems to be drowned out much like what the boy in the painting seems to be doing to her and her speaking. Her features are not as clear as the boy’s and because she is positioned behind the boy, the shadows cover most of her body. This was probably done to ensure that the audience’s focus would be on the boy rather than what else was happening in the background. Everything around the boy is very dark in comparison to his face and adds a large contrast of his emotions to the overall atmosphere of the moment. From the boy’s face it is completely evident that he is not enjoying the interaction with his supposed tutor. The boy’s eyes are slightly blank, as if he is spacing out or daydreaming. With careful examination, the boy’s clothes indicate his nature as one of the higher class being able to afford a private tutor. This brings a whole other perspective to the art by creating a lighter and more leisurely atmosphere. The dark color palette does not create a solemn mood, but rather a slow and relaxed Sunday afternoon kind of impression. The artist made great use of the subjects and their poses to lead the audience to a certain type of reaction he had wanted to incite while painting this piece. 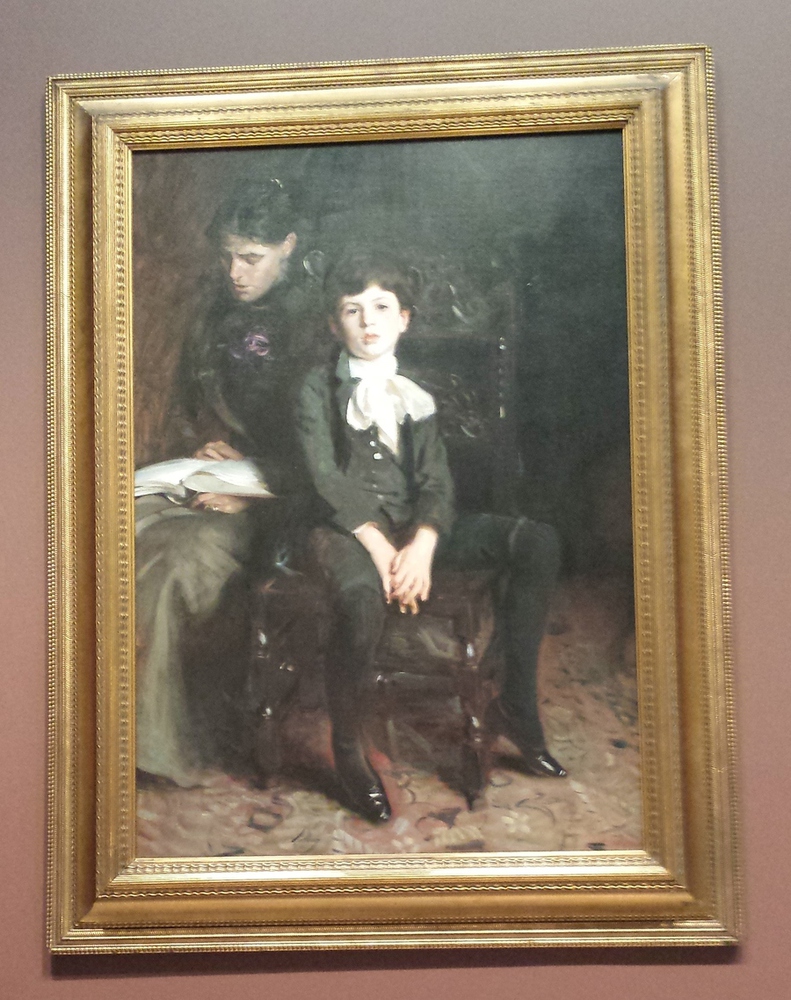 Macdonald-Wright began his art career  in the early 1900s, with his father securing him private painting lessons from when he was at a young age. After he married at seventeen, he moved to Paris with his wife to study and immerse himself in European art. He studied with Morgan Russell and Canadian painter Percyval Tudor-Hart during his stay there. The color theory of his teacher deeply impacted him and was able to connect the aspects of color to that of music. He was influenced by the works of Delacroix, the Impressionists, Cezanne, and Matisse; artists who placed great emphasis on the "juxtapositions and reverberations of color." This was the time where he developed his style, Synchromism ("with color") with the belief that painting should be done very much in the way music is made and stray away from its "representational associations." European critics claimed that Russell and Macdonald-Wright took the idea of color abstraction from Orphism. This in turn drove him and Russell to move to New York in hopes to gain financial success and a means of supporting their cause. During this period, Macdonald-Wright commented that he strived to incite "[wholly aesthetic] emotions, [from the audience], as when listening to good music..." With little success in New York for his artistic style, he moved to California and there helped organize the first modern art exhibit in Los Angeles, "The Exhibition of American Modernists."  While his time in LA, he had a very significant presence in the art world and taught art for many years and held many studios across the world.

The second piece of art is more abstract and much less realistic than the first. This piece, called Sunrise Synchromy in Violet by the American artist Stanton Macdonald-Wright is an abstract representation of a man waking up under the changing lights of the early morning. The effects of the different colors are similar to how a 3D image is seen as on a screen without wearing the appropriate 3D glasses. The colors all over the picture confuse the audience at first and seem to distract them from the subject of the painting. Once the eyes get adjusted to the color dissonance, the black outline of the man becomes visible. The man is awakening from his sleep and the colors radiating around him indicate a sense of altering light from a window. This color mash up incites a sense of instability or shaky, and reminds one of the groggy feeling in the morning at the moment they just wake up. The vision is blurry and everything seems to be moving quicker than it actually is when one wakes up. This painting is able to capture that instant accurately through the radiation of all these different colors and gives the audience a sense of familiarity with this feeling. 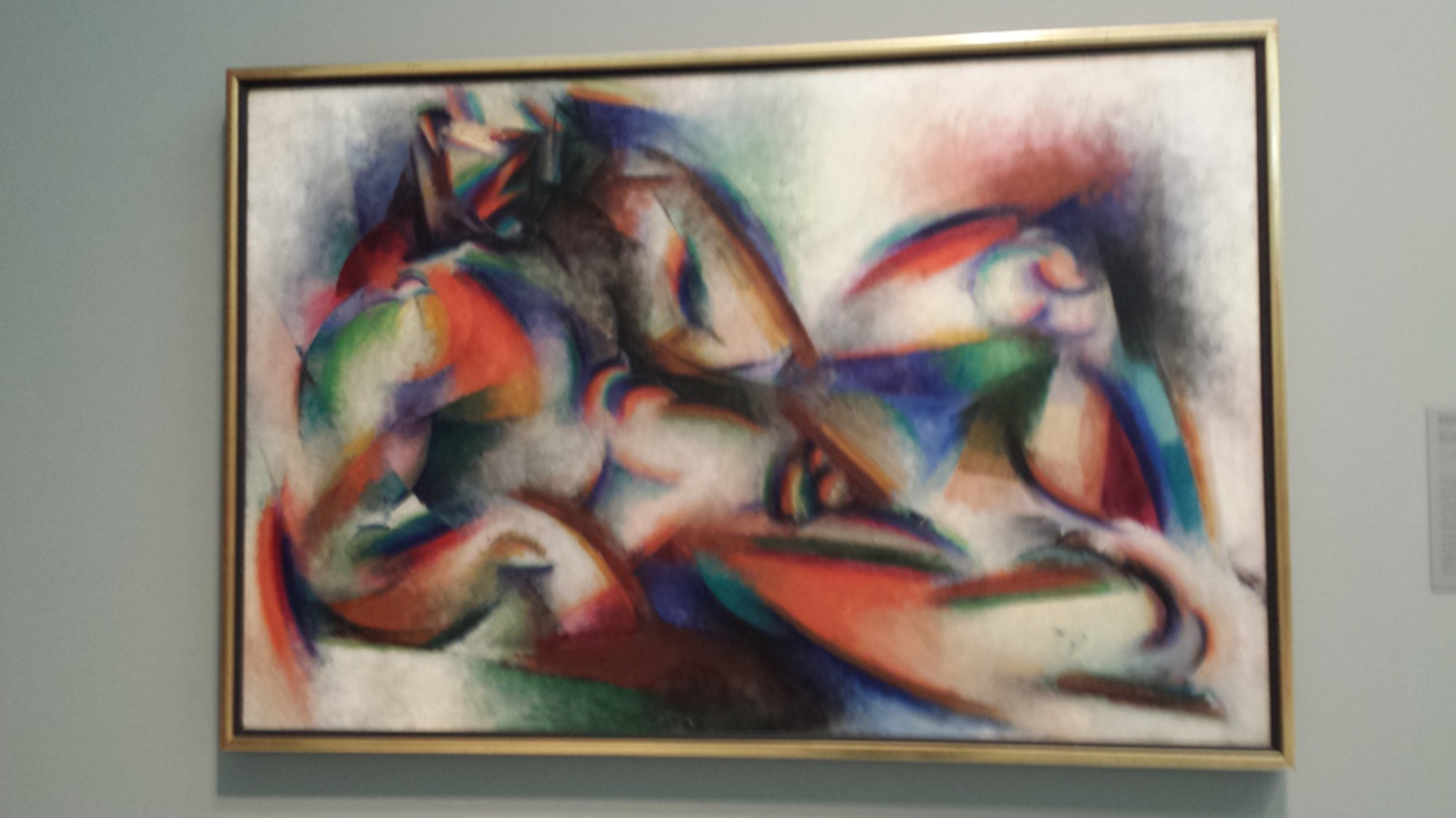 Ultimately, the experience was definitely effective as it allowed me to appreciate art in a new light. Observing pieces of artwork for longer periods of time gave rise to smaller details that became noticeable after carefully examining them. These small elements that make up the artwork such as the composition, color, shape and space brings a deeper meaning to why the artist chose to display their work in that manner. The relationship between the artist’s intent and the audience’s reaction is a very important part in the presentation of the piece and in order to strengthen it, it requires the audience to be more wary of the different elements that make up the piece of art.