Change my "shadow" Facebook profile picture that's outside of what's "normal" for my social media profile and analyze the effects. 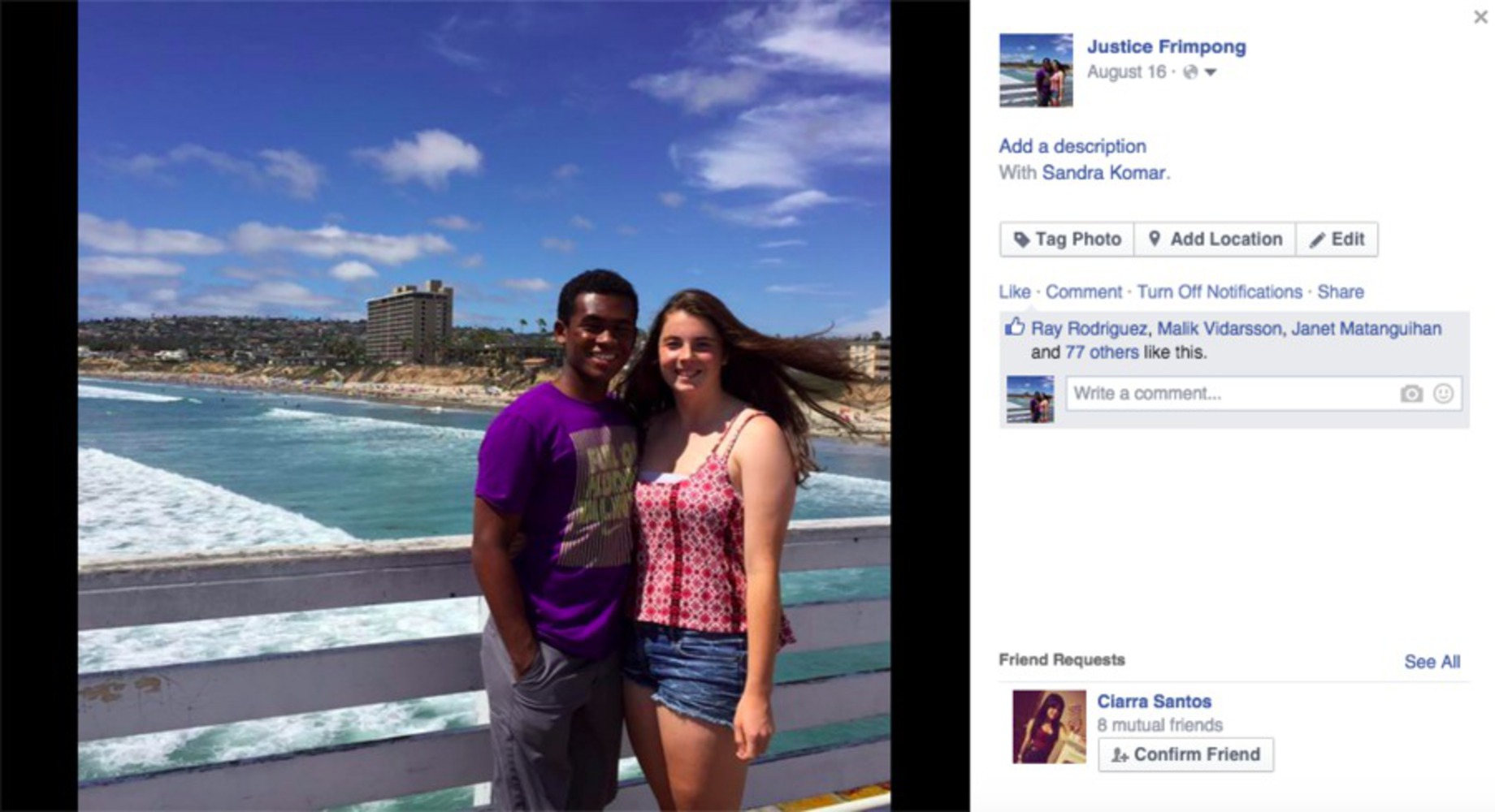 On Facebook, I'm not really a 'producer' of any kind. I use it mainly as a means of communication with friends, time-wasting with watching videos, or information gathering. I'll occasionally 'like' something here or there, but I doubt I appear on many people's timeline's more than once a month.

The only time I intentionally appear on people's timelines is when I change my profile picture once a year (just so happens to be that often by the way) and for some reason, around 67 - 80 people 'like the picture'.

So what I'm going to do is change my Facebook profile to this: 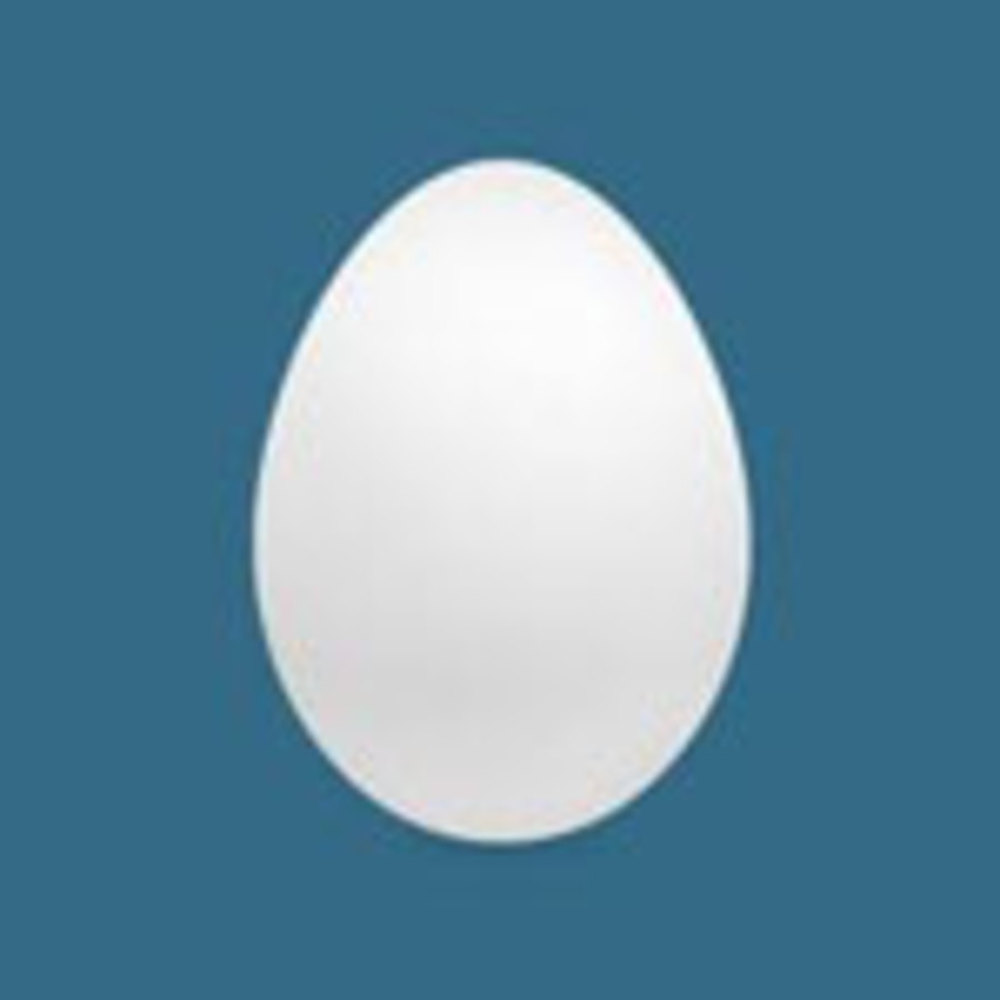 It's the Twitter Egg. I never really add descriptions to my pictures so I'll keep that the same here as well. I chose this Twitter egg because it's something seemingly very random and irrelevant to basically everything about my profile. It also somewhat breaks boundaries on Facebook, in that this picture is specifically related to Twitter, not Facebook, so it's completely not normal. It's designed to capture the attention of those that see this on their timelines and stimulate some sort of reaction that would otherwise not be normal for them with respect to me.

Essentially I'm trying to get my Facebook friends to become confused and wonder why exactly someone with a Facebook profile like mine would change their profile picture to something seemingly very random and irrelevant to basically everything about my profile.

I want to see how many likes I'll get in comparison to my current profile picture, and I also want to see if I'll get any comments by confused Facebook friends.

I suspect that those that know me well will not think of the change too much, but those that don't know me well will do the whole "Tinder Snap Judgment" thing that we discussed in class earlier this week. Hopefully I'll get comments confirming these thoughts. I also think the amount of likes will not surpass 10 because it's just not relevant to me whatsoever (I think I'm even being optimistic about 10).

So what will happen when someone from the Facebook shadows changes their profile picture to the Twitter egg? 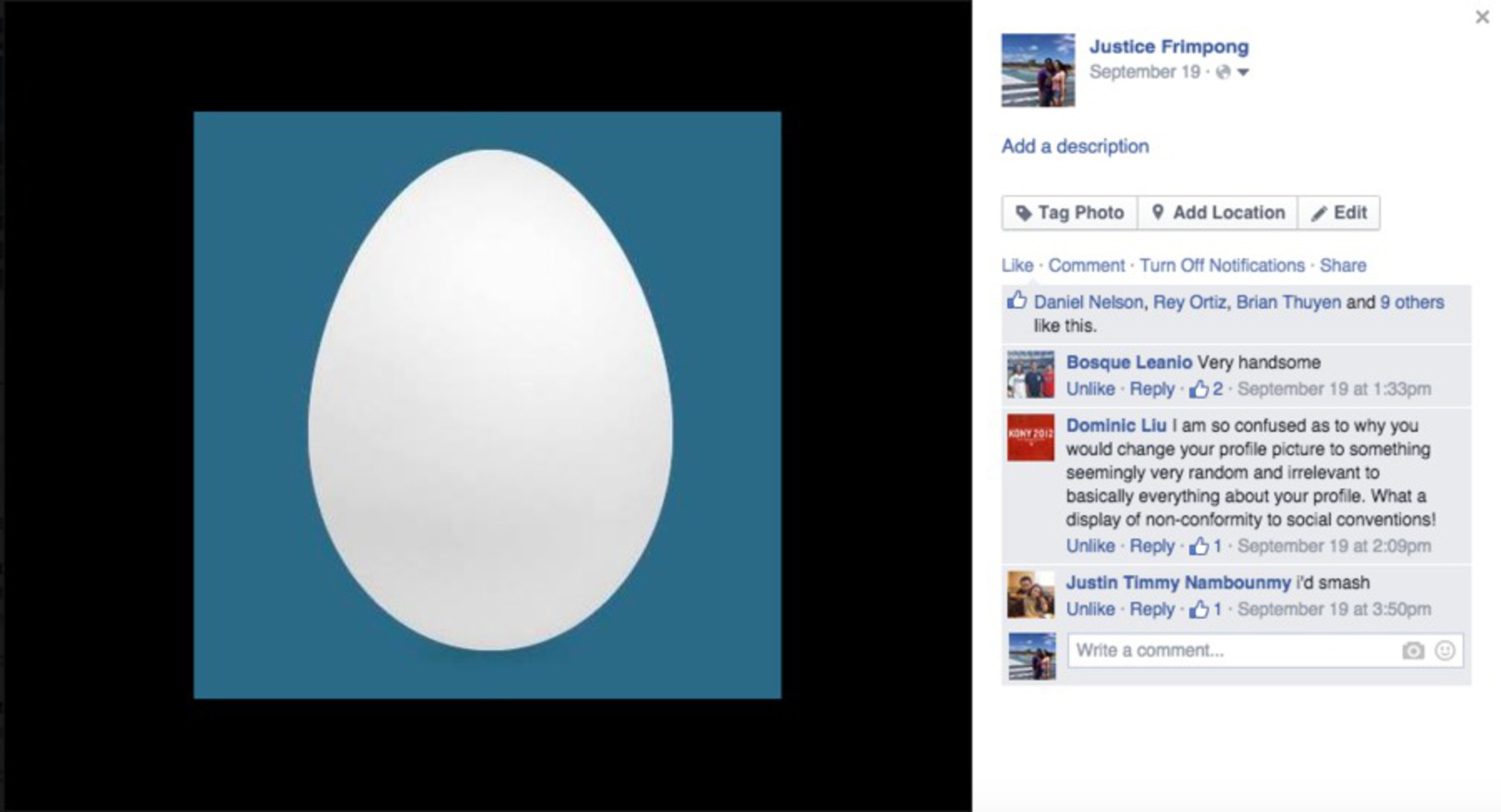 As opposed to my previous 3 profile pictures, I got a whopping 12 likes on this one (pictured above). Of the 12 people that liked it, 10 were people that liked at least one of my previous 3 profile pictures and are also good friends of mine, meaning that these people would've liked my picture regardless. 2 of them however have never liked a picture of mine before, and are not exactly close friends of mine.

This profile picture generated 3 comments, 1 of which (the middle one) was from a person that is also currently taking this class so we can disregard that comment. The top one is a good friend of mine and I know he's a jokester. However the for bottom one, it can be seen that it's a troll comment, however I find it a bit strange because I've maybe held a couple 2 - 3 minute conversions with him throughout high school so it's not like I'm 'buddy-buddy' with him.

I also got messages from two friends asking why I changed my profile picture to an egg. One of them called me a 'f00l' (not 'fool').

Thus, it was mainly my closer friends that responded while the majority of the other people did not.

In conclusion, I originally thought that I'd get less than 10 likes but I got 12 so I'd say this is a bit of a confirmation of my original thoughts. I did not really get any public reaction about how someone is confused by my profile picture (except for the middle, disregarded, comment), however I did get messages from two friends expressing their confusion, as well as one friend who asked me about it while we were playing Destiny: The Taken King DLC together on the PS4.

I learned that people who aren't as close to you on Facebook are probably less likely to interact with you on the social media platform if they are (likely going to be) confused by the content you produced. But there are some that may have the opposite reaction and interact with you precisely because you're doing something out of the ordinary for whatever personal reasons they have for doing so.

I find multiple elements unique about your choice of changed picture:

• The new picture is generic, while you have on your page, as evident, an identity. I am curious about what your friends will interpret about an anonymizing image.

• The picture you choose implicitly breaks website boundaries. This week, we have discussed about how online vs. offline etiquette, and among one of the points that seems taken as granted is how online etiquette differs from site to site. Is changing a profile image to that of another social media site's a violation of online etiquette? I wonder how people will respond.

• I am quite interested in your exploration of how many 'Likes' you might receive from this change of image--especially if 'Likes' are more a social obligation on Facebook or more personal an action to take.

Overall, the project hits multiple inquiries that stand out to me, so I look forward to seeing a discussion of the results!

Change my "shadow" Facebook profile picture that's outside of what's "normal" for my social media profile and analyze the effects.