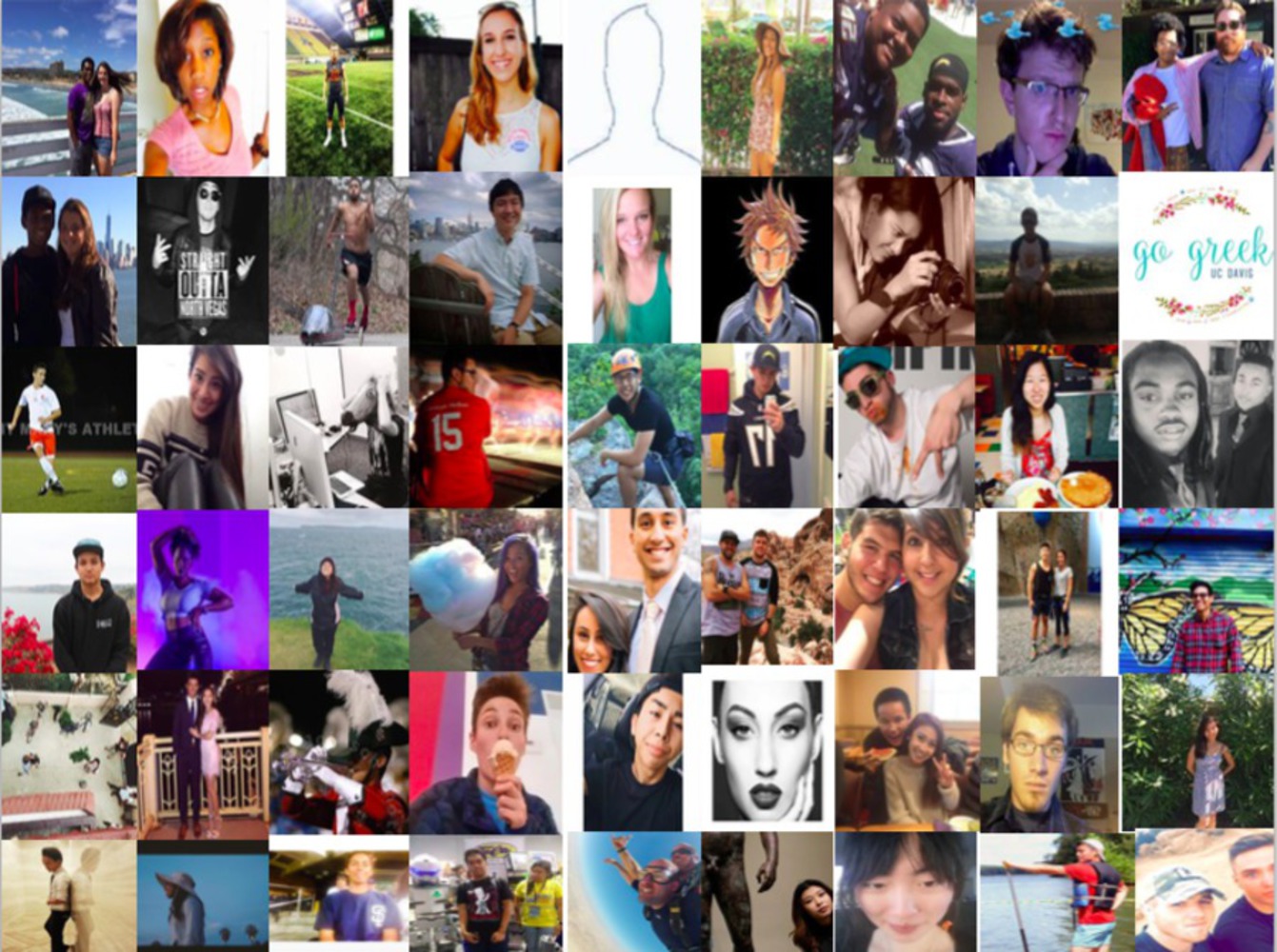 When going through my timeline to pick the first 54 people I saw as my subjects for this project, I suddenly started categorizing people as: artsy, adventurous, friendly, etc. I wondered "Is this what they wanted my first impression of them to be as I stalked their profiles? Because it seems like they're trying to advertise something about themselves through their profile pics". And with that, I developed my question.

Judging by how well I know the people and what I see in their profile pics, here's what I found: (Note that people can show up in multiple categories) 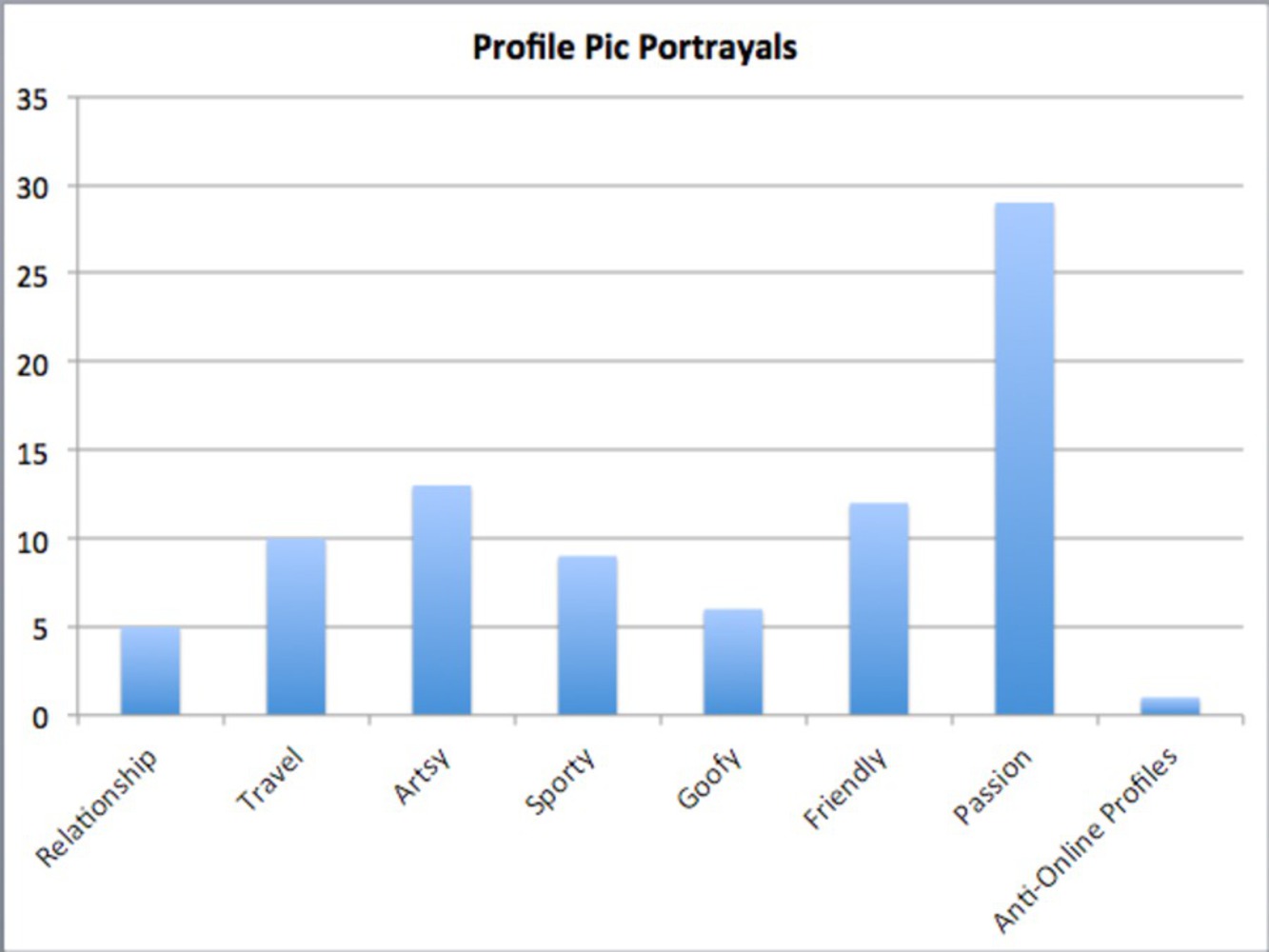 51 out of the 54 people had pictures of themselves and these pictures are up to date, at least within the last 2-3 years or so. One of the people that did not have a picture of his/herself is the one in the "Anti-Online Profiles" category. He/she really does not like to be on an online account and only recently made a Facebook for undisclosed reasons. The other two were showing something they thoroughly enjoy (Greek life and an anime called "Giant Killing" - highly recommended anime if you're into sports animes).

Unsurprisingly, over half of the subjects advertised what they're passionate about. This one is essentially a superset of those involved with traveling, sports, and art in their pics. I am however surprised that there wasn't more variety between the general categories I came up with for these 54 subjects. However, that could be due to a lack of creativity on my part when it comes to generating these general categories. But still, I chose the ones that stood out to me the most, which is what I'm assuming most people would do upon first glance of stalking a profile pic.

Of the 11 people I know to be in relationships from my collage, only 5 people have their a picture of their relationship as their profile picture. I find this to be interesting because I would've thought that the amount would be closer to 85% as opposed to about 45%. Thus, the missing 40% I assumed would have advertised their relationship felt that they wanted people to see something about their lives that was their own upon the first sight of their profile pics.

I created the 'goofy' and 'friendly' categories because some people essentially only had selfies with smiles, or pictures of themselves doing funny things, which said to me that they advertise that they're friendly or funny people. Or maybe they just felt they looked good in the photo.

As opposed to just thinking a profile picture is just a picture, this question made me realize that people like to advertise what they're all about through this one 'important' picture, even if the picture is of a blank outline of a head. Most people decided to say "hey this is me, this is what I look like, and this is what I'm passionate about", whether that be dancing, photography, their social aspects of their lives, the teams they support, etc. I feel like this will apply to any social media platform that doesn't depend on 'producer/consumer' models (like YouTube).

I really like the way you categorized the profile pictures you got. You made reasonable claims about every category, and I find the "relationship" part to be especially surprising and interesting. But I feel like the reasons you gave on the "goofy"/"friendly" category a little unclear because you aren't persuasive enough to make me think funny photos and selfies can be in the same category. Maybe you can try to elaborate more on this part.