To organize keys neatly and safely

[Write about the big ideas behind your project? What are the goals? Why did you make it? What are your motivations?]

I am going to make a key holder (or key chain) to store keys neatly and to be easy to carry keys. I have a cute owl key holder. It has a LED eyes and cries when I push its button on the wing. But, the owl is too fat to put into my pockets. Even if I put the keys in my pocket, the sharp tips of my keys damage the cloth’s lining because the keys are not organized well. Lastly, the ring that locks keys has got loose so that it easily released and keys are detached from the ring. I will try to solve the problems of my key holder 1) too big to put into pants’ pocket 2) the sharp tips of keys damage the lining 3) the loose lock of the key holder.

[How does your outcome relate to other work in the field? What makes it similar or different to other objects of the same genre? How have other objects failed to solve the problem you have identified?]

I found one key holder that matches my needs. As the keys can be swung into the inside of the leather strip, it can carry keys neatly and the size of the entire key holder would be smaller than the conventional ones. Thus, I can easily put it into my pocket. Nevertheless, the key holder has opened sides, so there is still chances that cause damages of the pants’ lining. I need to make a lock to hold keys in a holder. 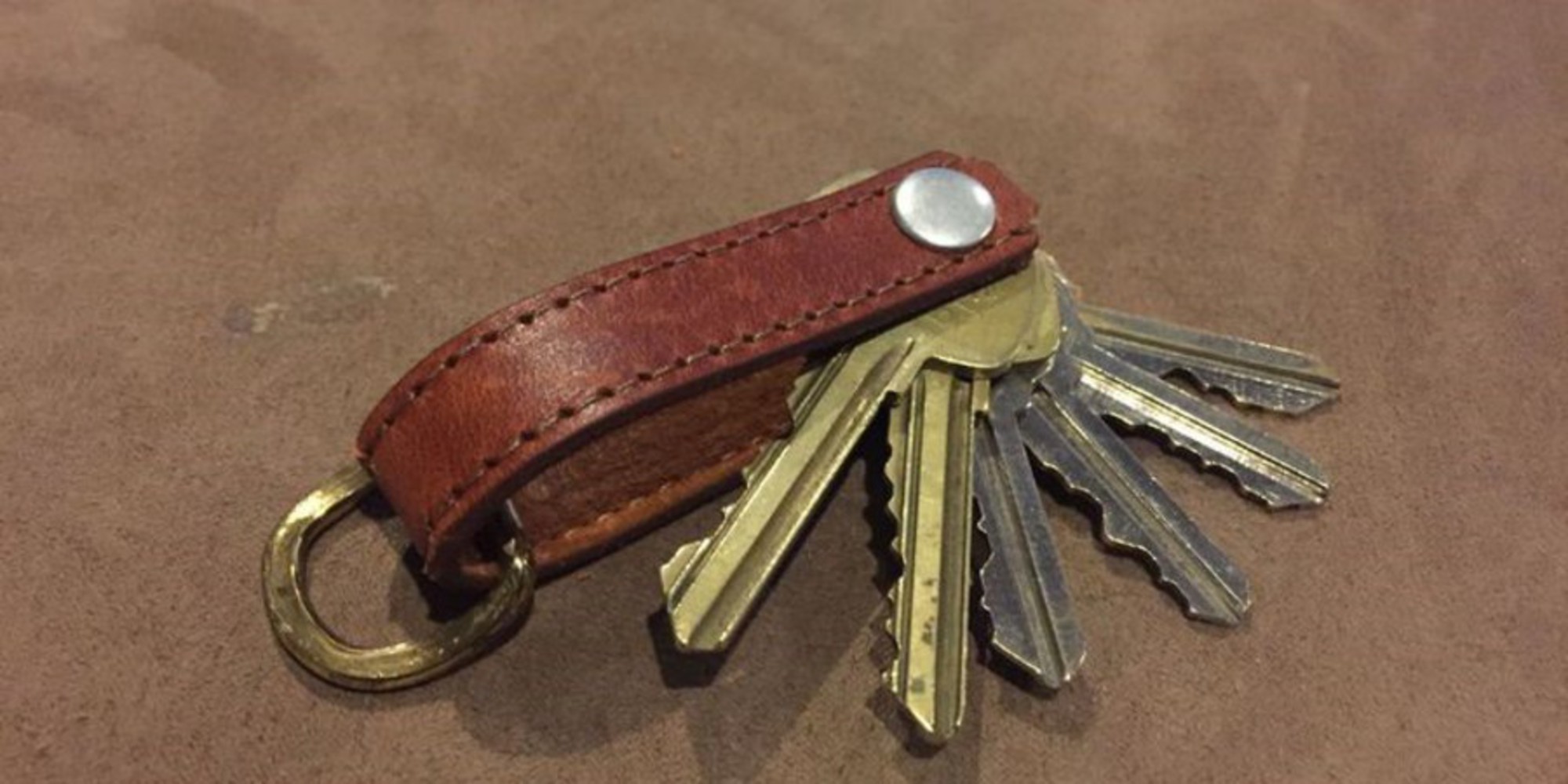 [Include sketch with as much details as possible, like: approximate dimensions, materials, layers, textures, colors, and aesthetic influences.] 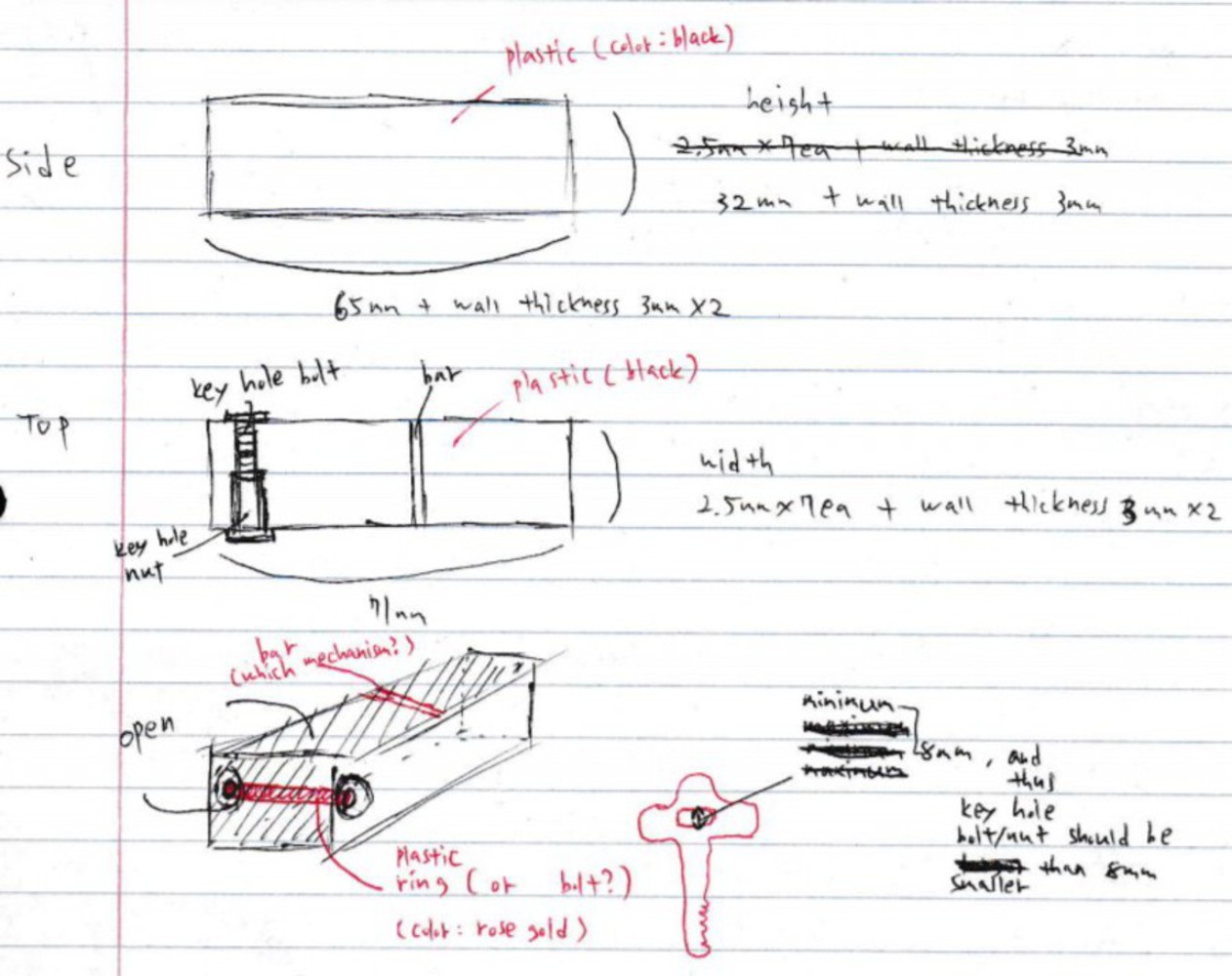 [What influenced your design? Is there a specific style, art movement, or natural phenomena? Include at least one example. Can be a still image, video, or music.]

The main function of my key holder is to carry keys neatly, and thus, it is required to be compact because I want to put it into my pocket. The key holder shown in the previous section is a good design to meet my functional needs at some levels. So, I want to improve the design to fit my needs fully. I am going to add a flexible magnet to hold keys. A magnet on the bottom will attract keys not dangling. Also, in terms of aesthetic portion, it is made of leather and it looks fancy to me. But, 3D printer cannot use the leather material. Instead of leather, I am going to make a rectangular plastic box like a finger cheesecake box.

[Outline your approach to the project. What steps did you take to design, model, sketch, and prototype this projects? What ideas did you generate and how did you refine or reject them? How did you use cutting, etching, scoring? What challenges were encountered and how did you resolve them? Include photos of prototypes, redesigned sketches, design worksheets, and failed trails.]

- Dimension: I can determine the length and width of the key holder by measuring my keys. The longest key’s length would be selected as the total length of my key holder. The total thickness of my keys will be the height of the holder. Also, the diameter of the ring would be determined according to the opening size of keys.

- Color: The color of the body box should be dark gray or black because those colors look luxurious and they are resistant to stains. The bolt and bar color should be metallic color to make a contrast to the body color. I think the rose gold color will be a good choice as well. I would spray the bolt, nut, and bar in Rose Gold color. The combination of black body and rose gold joints would elevate the fanciness of the key holder surely.

- Material: The body material is plastic and the joint would be also made of plastic. I can carve bolts and nuts with 3D printer and they will be the joint of the body and the ring.

- Design and Prototype: I will model the body first via Fusion 360 and add a flat magnet on the bottom of the body.

- Dimension: All dimensions were okay except the position of the joint hole. The hole was too close to boundary so that the keys were not able to swing 360 degrees when they were linked in the joint. I have moved the hole location X:5 mm Y:5 mm to the opposite direction. Also, the threads if the bolt and nut were suffering from the lack of resolution. The threads did not appear properly and get smudged. I found the real metal bolt and nut fitting to the joint hole and I used them instead of the 3D printed bolt and nut.

- Material: I was thinking the keys are iron and they would be attracted by magnet, but actually they were not iron but alloy. They did not attach to magnet and it was a critical functional error because the key holder would not be able to hold keys neatly. So, I cut grooves for inserting a slider to act as a bar.

- Design and Prototype: I also made some design changes after printing one prototype. I figured the printer can print thinner surface than now and I wanted the holder to be slim, so I decreased the thickness of wall. In order to make keys swing 360 degrees, I cut the half of the back surface. It would give more room to rotate. 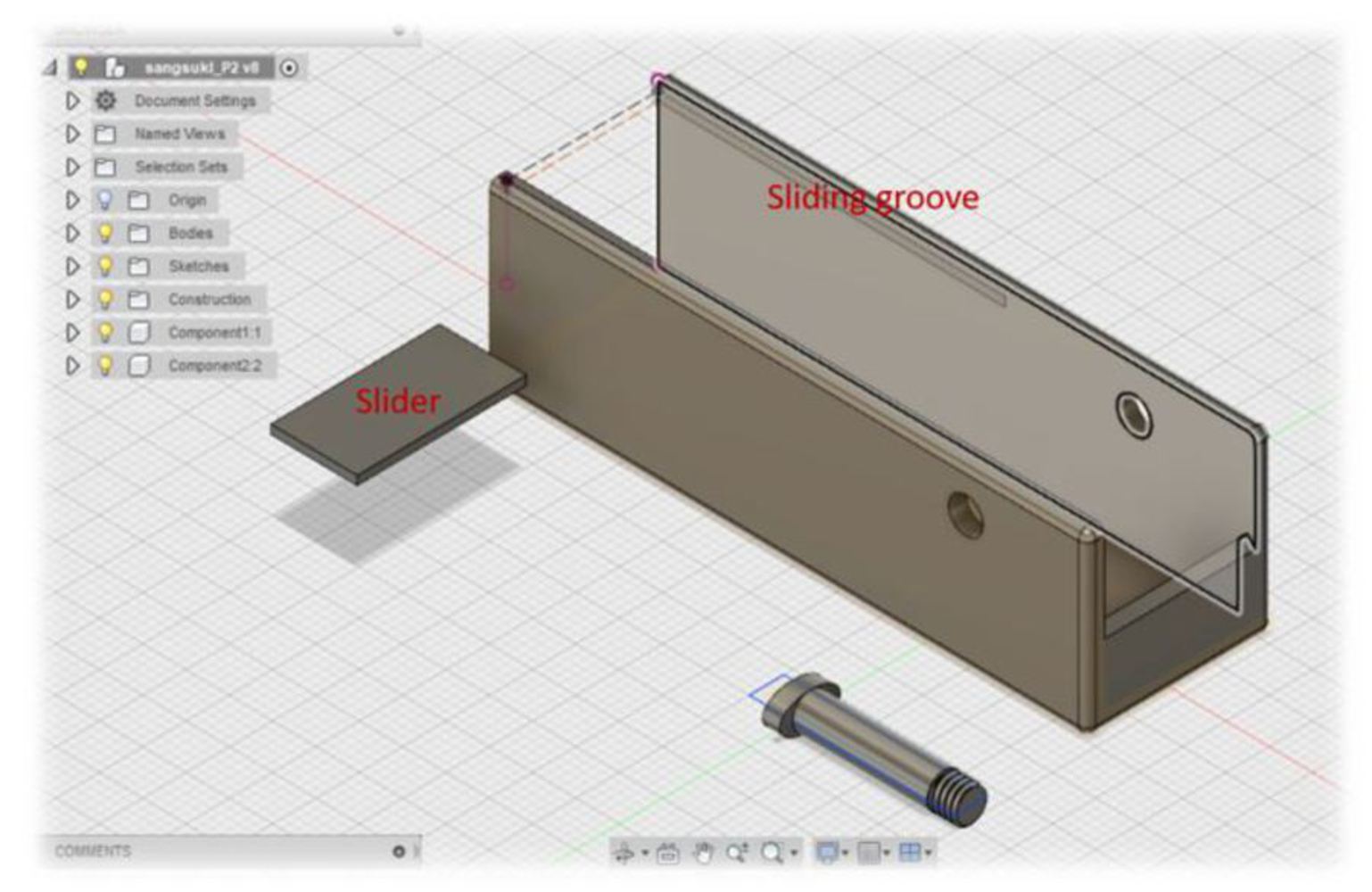 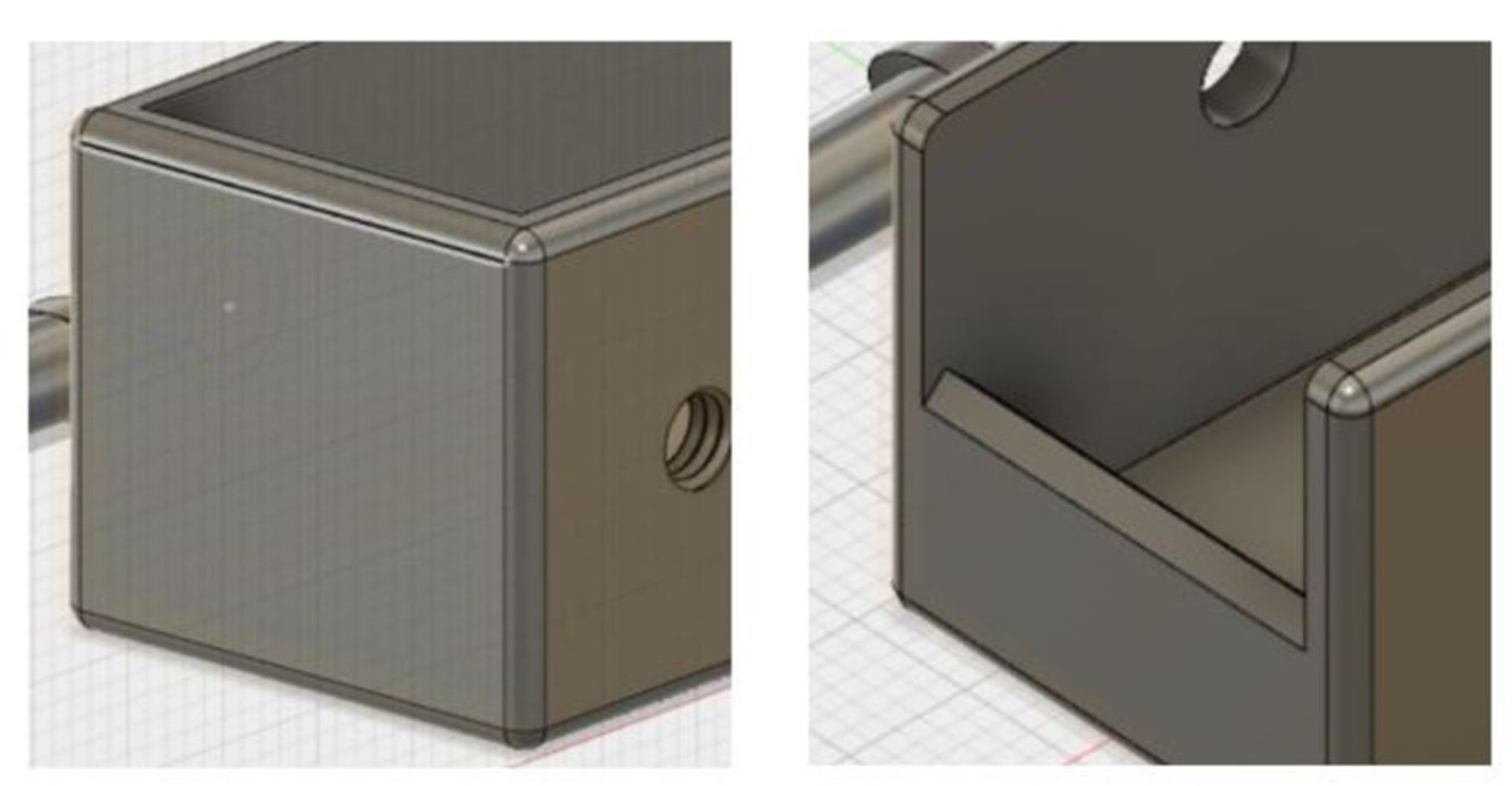 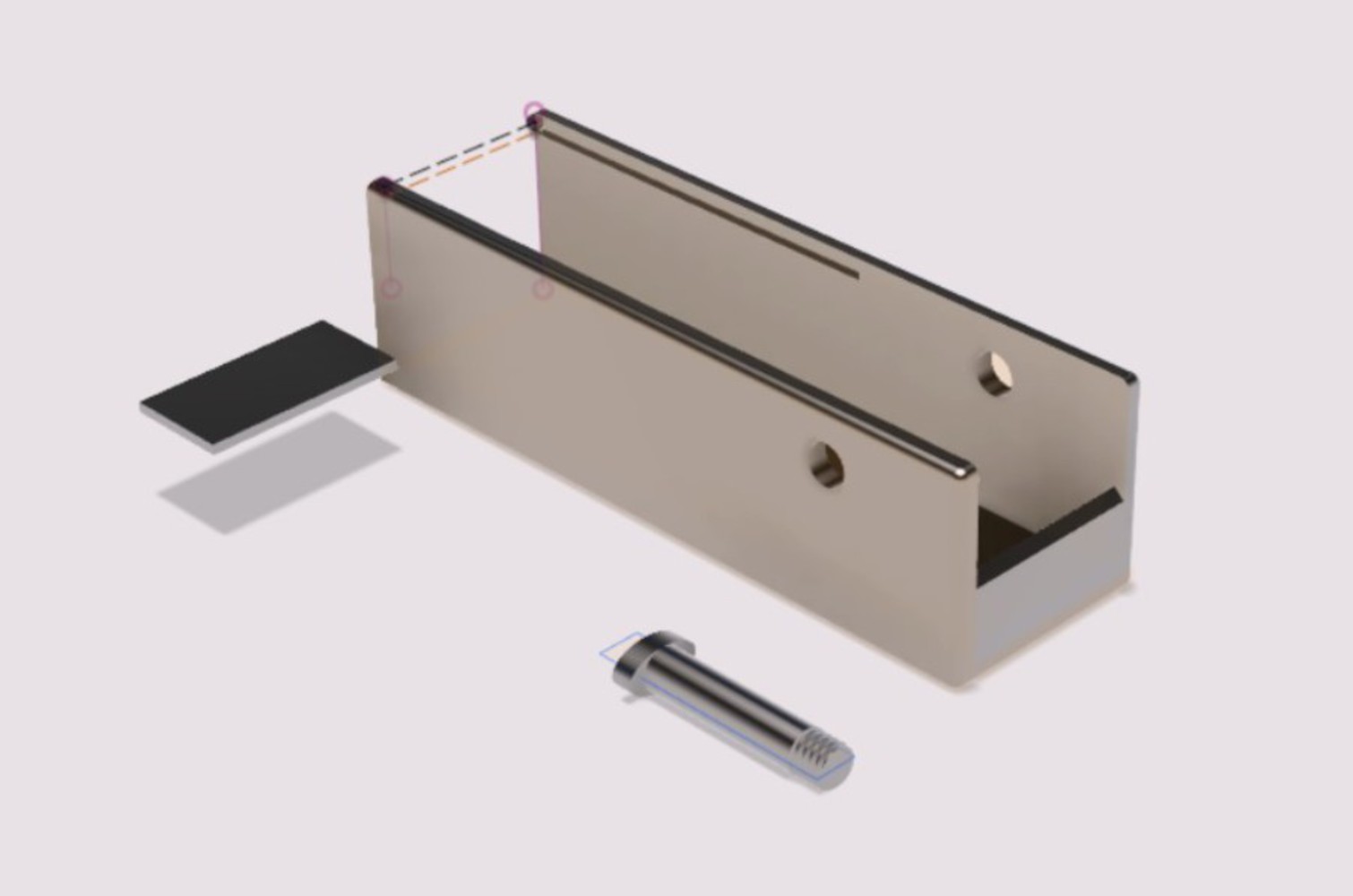 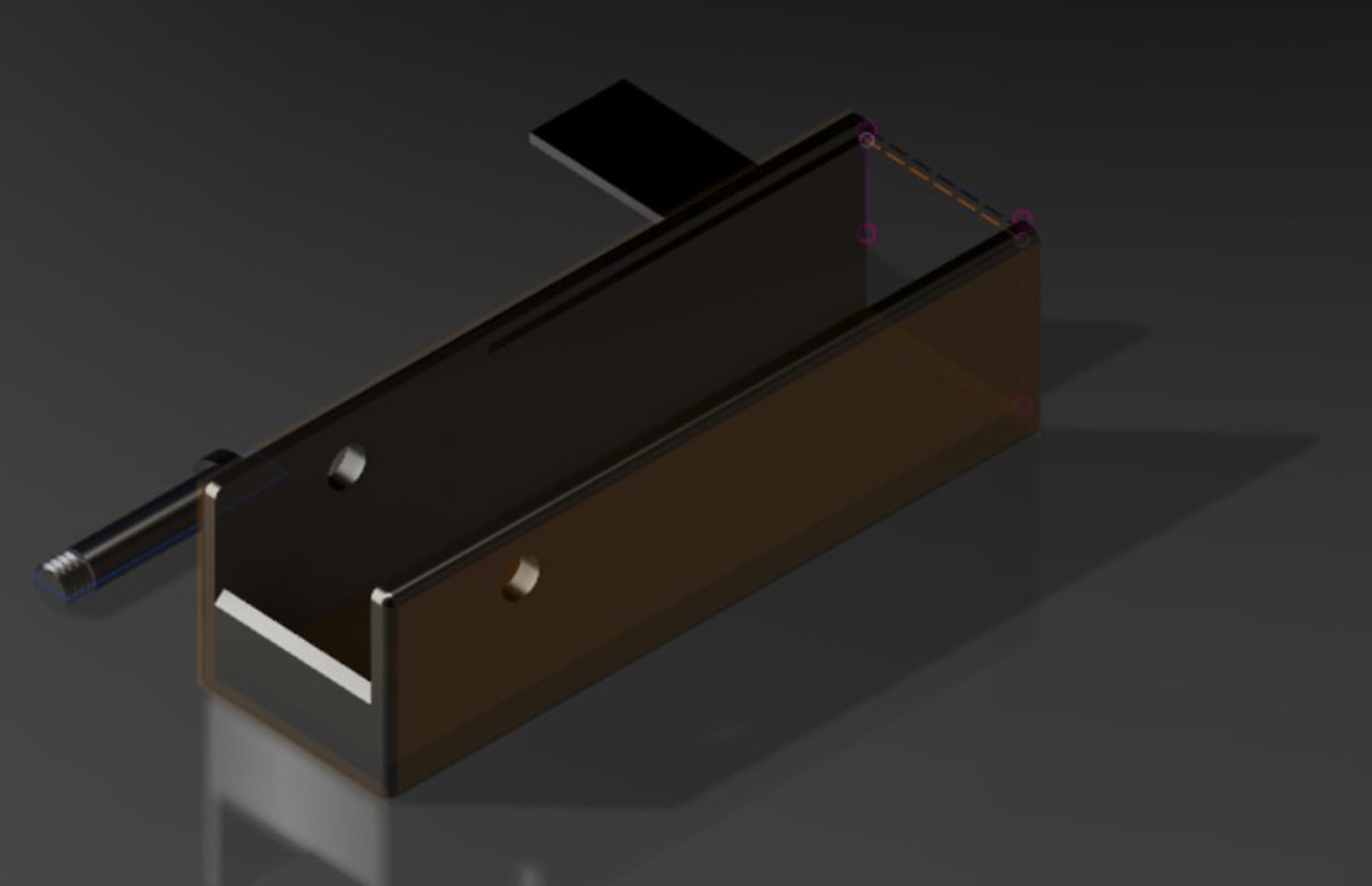 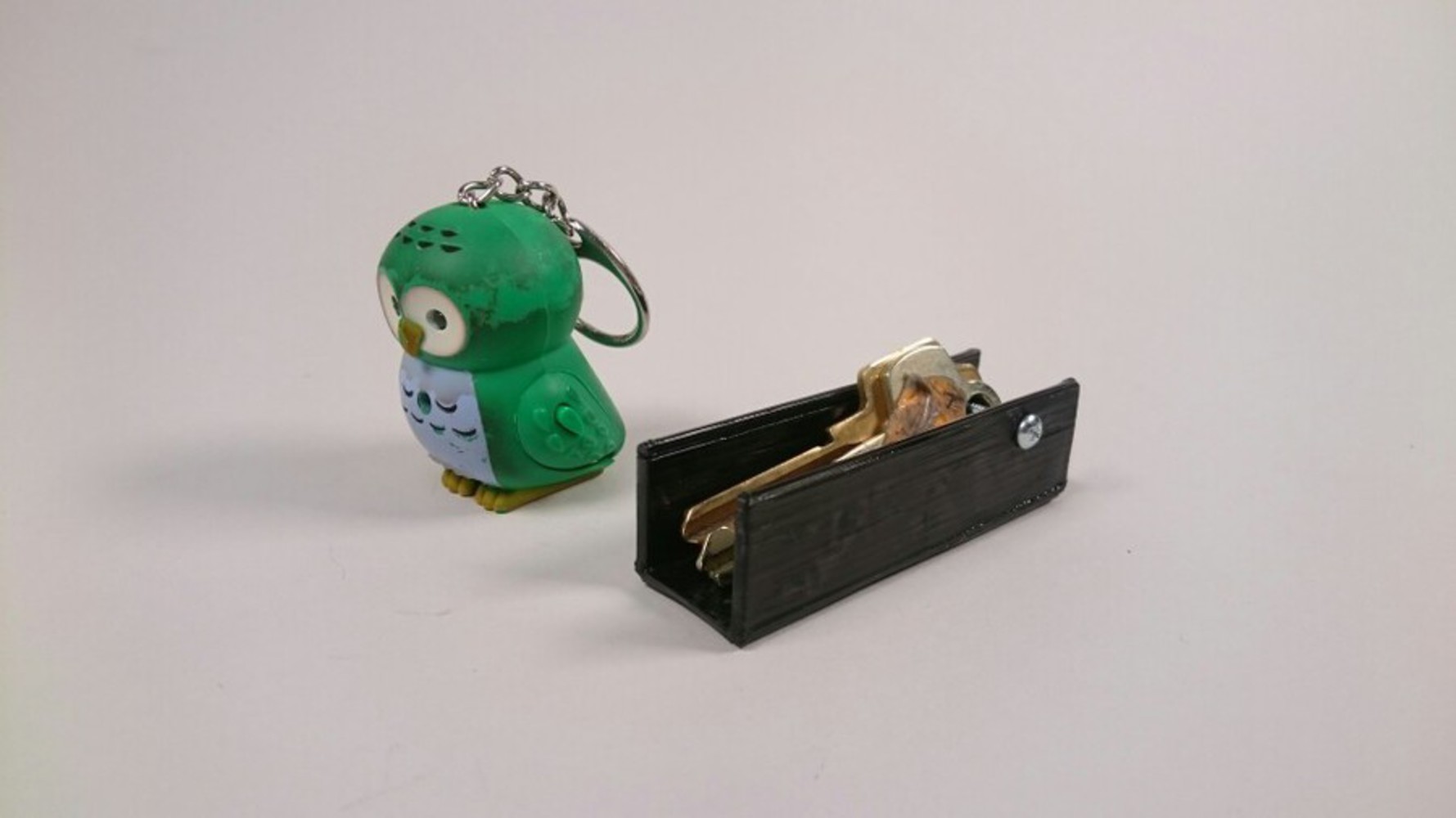 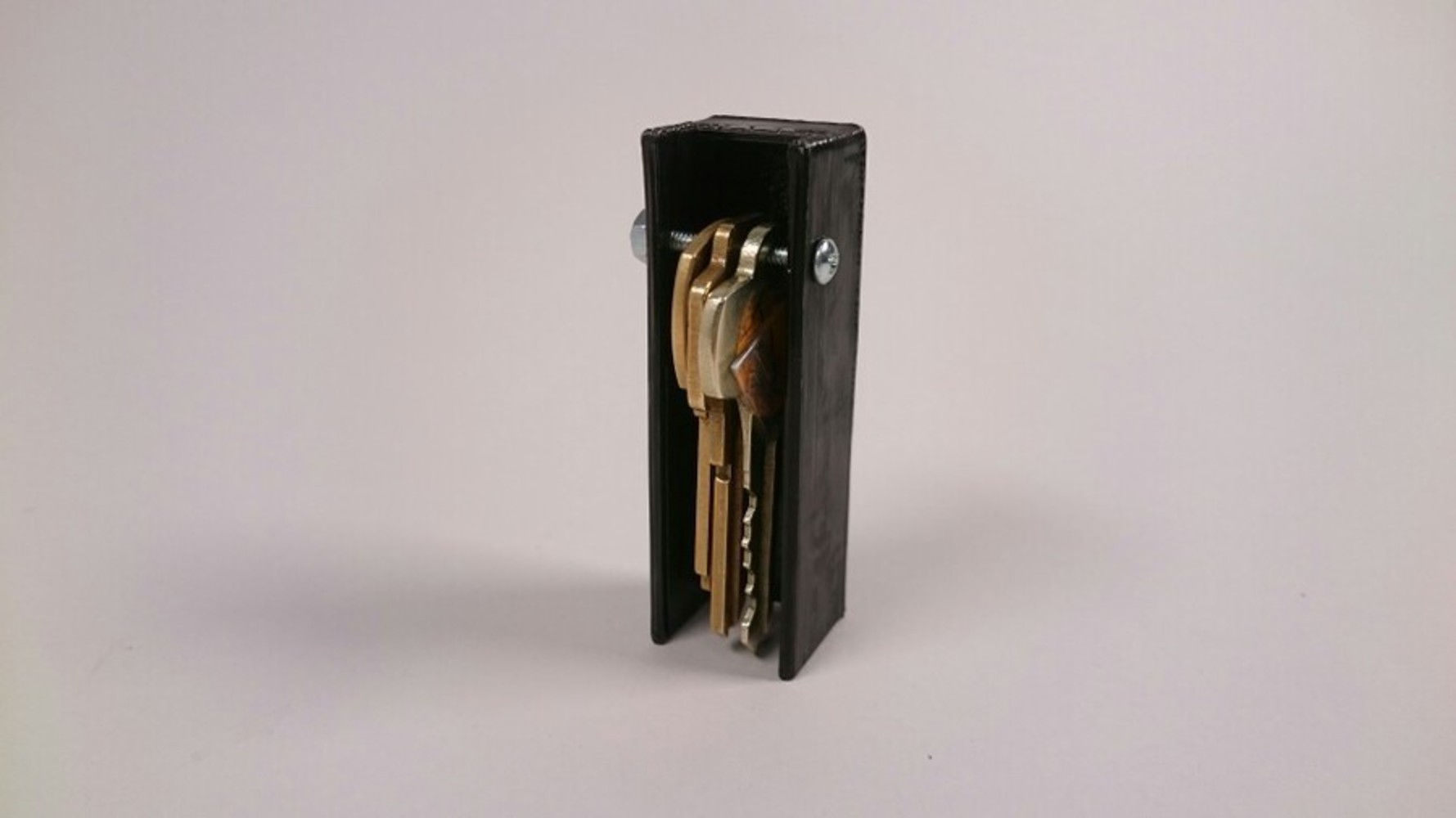 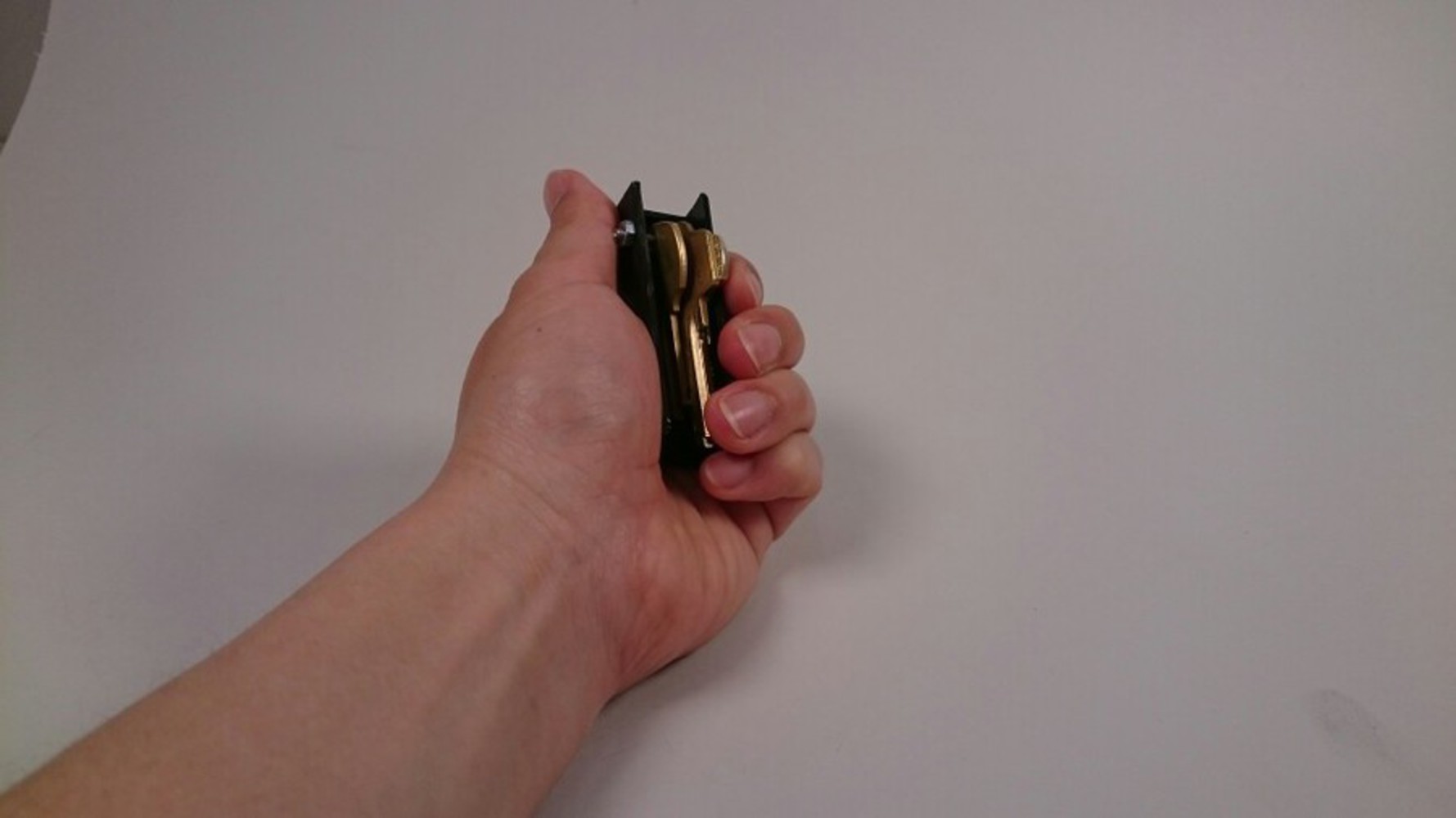 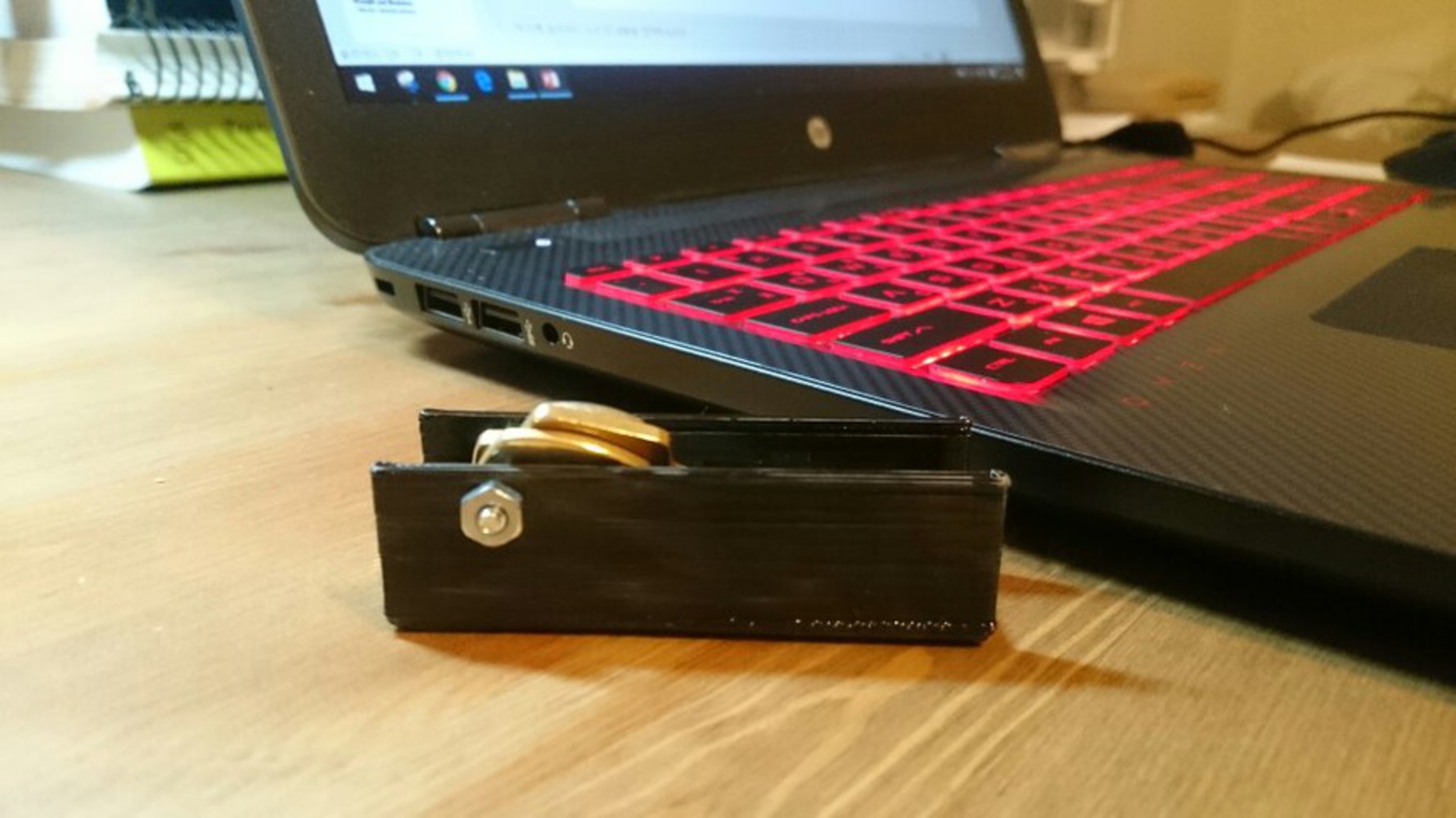 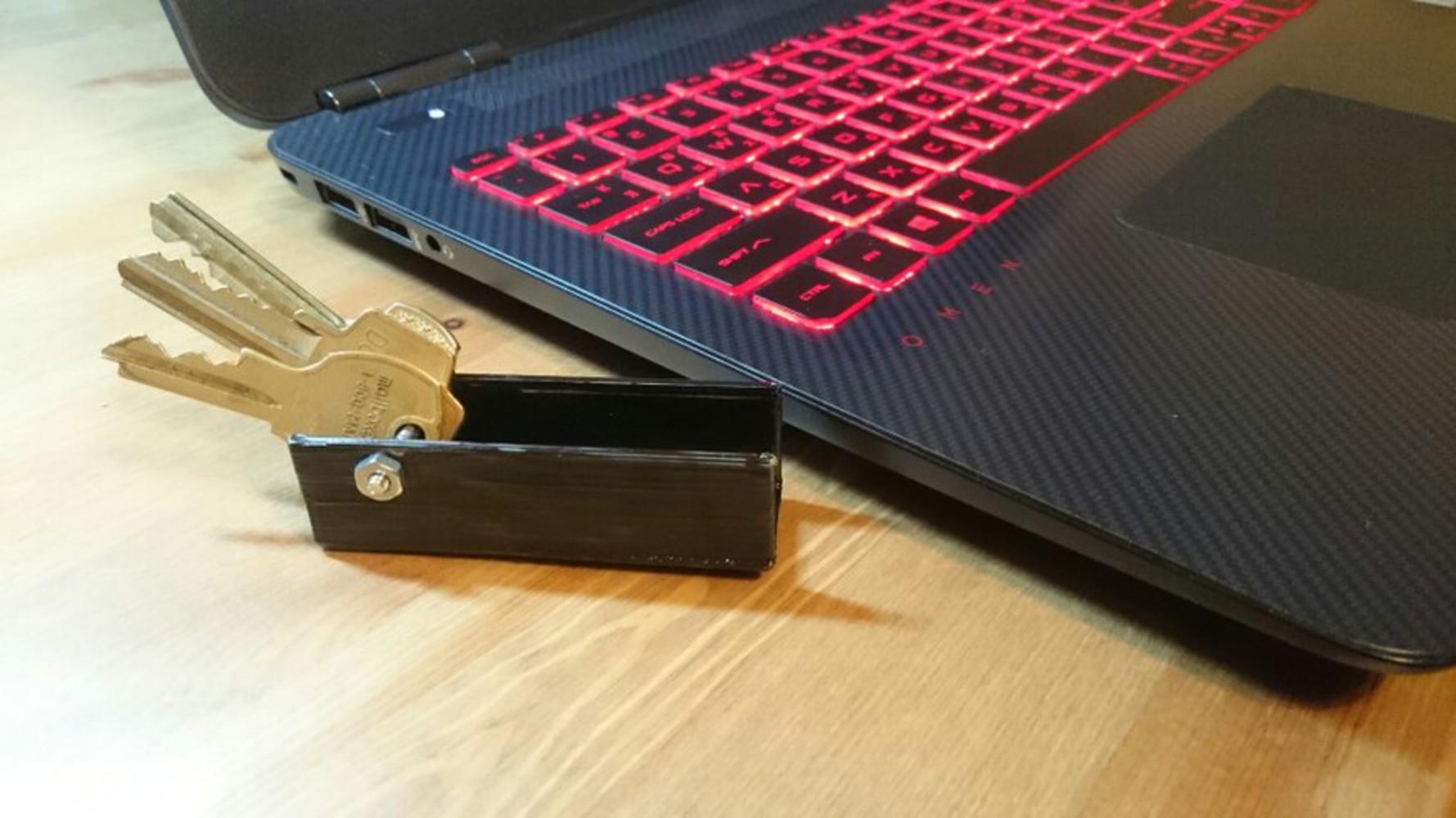 [Reflect on the process of making this project. What did you learn? What would you do differently?]

I should have checked the minimum resolution of the printer before beginning my project. I learned understand tools that I would use is very important. Also, I missed the procedure testing materials like magnet and keys. I was misunderstanding the characters of the materials, and I found it after the first prototype. If I had tested it before printing the holder, I could have found it. And the failure of the magnet led me to alternating the mechanism of the holding way from magnetic force to physical barrier via a bar. On the other hand, the size of the holder was well determined because I measured and reflected the dimensions of my keys.

To organize keys neatly and safely