This is an under 2 hr digital reproduction of Paul Klee's Insula Dulcamara 1938 painting.

Intro to My Organization

Following the order of deliverables on the assignment page, I answer questions related to my project under 2. Narrative and 3. Reflection. Because I had written and organized my written response following the aforementioned order, my responses span beyond the questions attached to these sections in the automatic "form."

About the Work I Selected

To find which direction to start my digital recreation I asked myself “what do I see?” in the painting. And by “what do I see?” I was really asking myself what are the objects and actions I kept seeing every time I looked at the work. I started with the physically observable. Consistently among many of Klee’s works, there were “strong” black lines that stand out “on” whatever background happened to fall below. What I identified as the background was grainy and patchy. The overall color of the painting is faded or “dried”, and there is a flat “distributed” application of paint. Lastly, there is a balance of long stretched and instantaneous “emblematization”. The keywords in these descriptions served as the starting points for my reimagining of the painting. An interesting realization I had at this stage of the process was that my reinterpretation of the painting was an act that was the product of a willful determination, such that I forget how I processed Klee’s painting before I intentionally wanted to reinterpret it. The artwork now was what I wanted it to be. Working in Photoshop, I wanted to preserve the curious arrangement of Klee’s painting so I set it as a semi transparent bottom layer. The structures that I filled out gained their forms in the corresponding sections, and then I cast away all other foreground elements that I considered trivial. I let the background be only the dominant reddish texture. Since the worms’ bodies followed the provided forms I drew them myself, but the background was a connection to a known form/image, that of a reddish, pebble desert, so I found a suitable image online and made it more transparent. The curviness and length of certain black lines inevitably led me to feel a sense of motion in the painting so I wanted to create actual motion in my reproduction. I followed my first instinct which was to build a pavement/sidewalk over the very hot pebbles so that they could be walked across - of course this first instinct was not a rational one since pavement in the heat is equally unbearable barefoot as the initial pebbles, but I followed this instinct anyway. Since we walk on sidewalks I wanted to make the sidewalk itself move, and so it does. The sidewalk crosses across my “painting” and it is the only moving element in my work. I made this animation using a Stop Motion app as the last step in creating my reproduction.

I perceived symbolism in the painting as half constructed figures that were completed in my mind. I associated depicted elements with known figures through shape. Overwhelmingly, these were ribbons with eyes that consequently became worms. The grainy, patchy red background regions resembled arid desert of small stones, which being hot and untouchable was unmistakably the background for its lack of contact with the objects place atop it. From that point forth, all the elements with more distinct shapes formed an ecosystem of primitive interaction with one another. To me this interaction came in the form of observation, especially since the black dots to me appeared to be eyes. The worms and eyes were the key interacting organisms, and thus the other ornaments fell away from my consideration. The greens and blues in the background too fell away as either having dried up or consumed by the greater quantity of desert. Now the objects at forefront that the painting presented became fewer and manageable, meaning I could keep track of all the elements with one look at the reimagined painting now. Within the above described ecosystem, there seem to be a hierarchical order of networks. First, every object contrasts conspicuously with its drawn quality over a photographed, realistic background, so there is a network of drawn objects linked by eyes. Then, the eyes fall into two groups: those belonging to living organisms and those that are freestanding. The small whites in the freestanding eyes are meant to add a sense of deliberation among them, while the completely black eyes of the two worms signify an empty gaze of lostness. Lastly, the objects are grouped by proximity, into two or three clusters. These subdivisions are unimportant, as they (along with the objects themselves) are trampled by the sidewalk that rolls through the scene. To me this parallels the (un)importance of unity and collectiveness of the symbols in Klee’s painting. No matter how the viewer approaches them they will always remain in one painting, which is self contained by Klee’s intent. Similarly, the sidewalk passing through my scene conveys my impression of video games, which are also self contained - the whole world (as known to the game) already exists within it. The fact that the sidewalk starts and ends off scene alludes to the question of borders and boundaries that Klee concerned himself with. The artist’s intentions in creating his painting informed aspects of my reproduction as well.

Klee believed that “the material world was only one among many realities open to human awareness,” and this mindset is evident in the process through which my reproduction is born out of his painting. Klee was known to explore the language of pictorial symbols and signs, yet my reproduction disregards a great quantity of such symbols. Klee greatly admired the art of children, who seemed to create free of models or previous examples. He brought this inspiration to a refined end in his work, but then my reproduction brings it back cyclically to childish drawing standards.

image of pebbles originally from https://upload.wikimedia.org/wikipedia/commons/7/77/Pebbleswithquarzite.jpg

image of pavement originally from 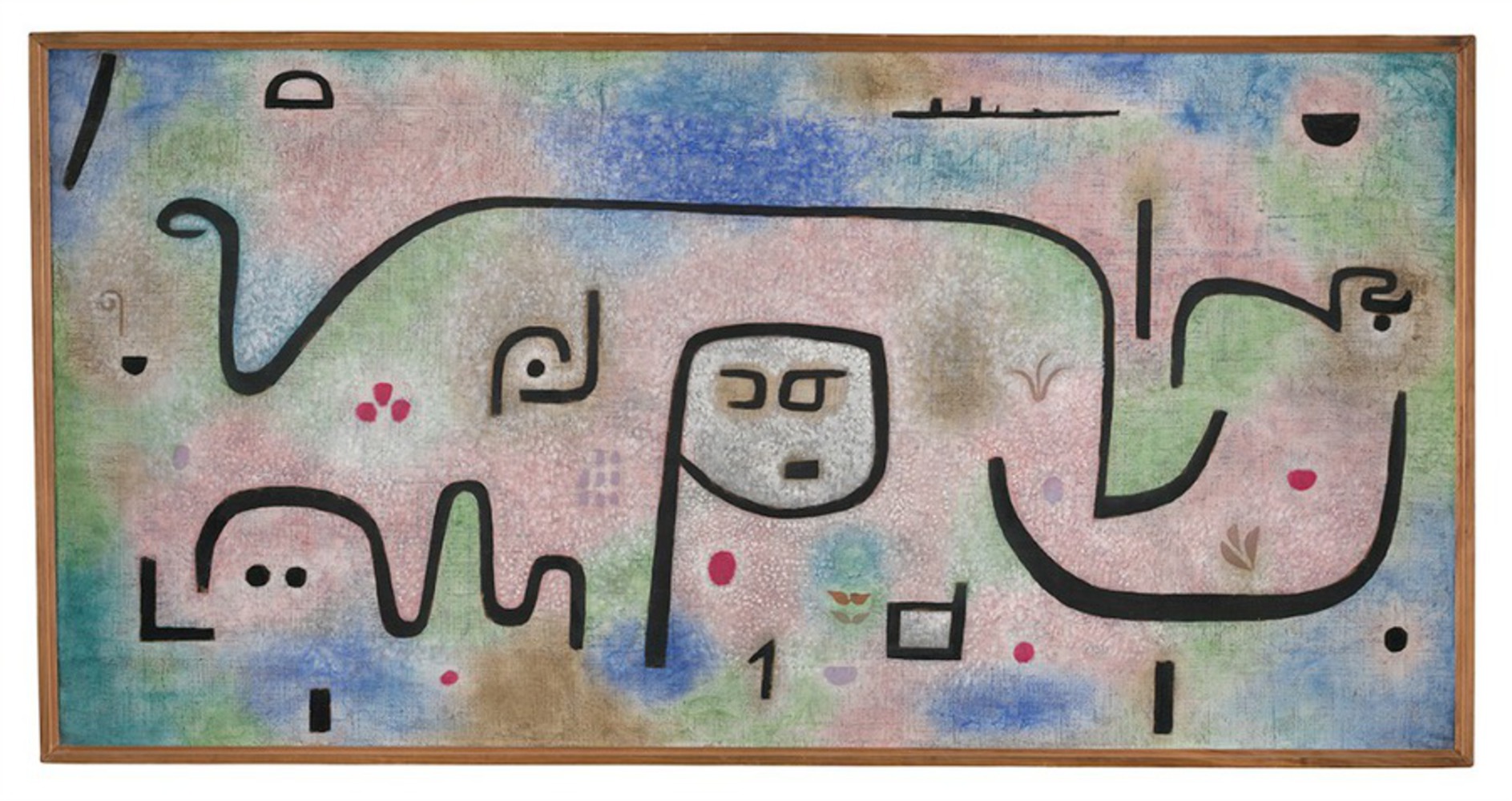 I really like the way you interpreted Klee’s painting. Your reproduction is playful and weird and feels very contemporary. It reminds me of animations by an artist collective I like called Paper Rad. Your documentation is a bit difficult to follow. Look at some of the other posts on the gallery to see how people broke up their text into more manageable sections.

This is an under 2 hr digital reproduction of Paul Klee's Insula Dulcamara 1938 painting.