Observe and analyze tumblr users' unique trends in self-representation through their avatars.

0
avatars, trends, and some brief analysis 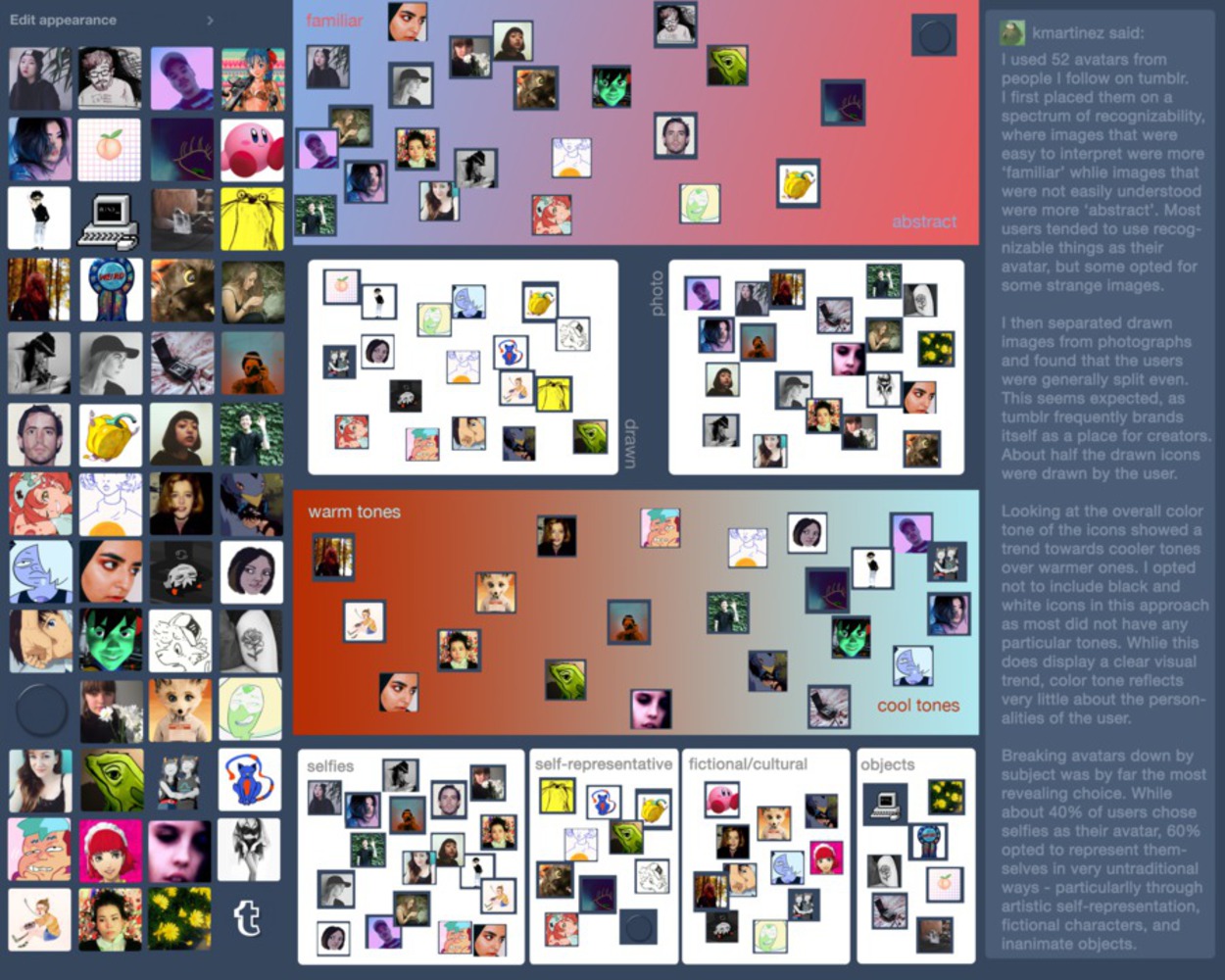 While users on social media platforms with a more personal fronts, like Facebook or Instagram, almost always use depictions of themselves as their profile image, on a less personal site like Tumblr users may choose to obscurely or humorously depict themselves since the focus of the site is less on interperson interaction and more on the sort of content users curate or create.

This unique form of self-representation is mostly intended to obscure the user's followers' knowledge of the user, but it is also generally carefully chosen to send specific messages about the person who runs the blog.

Amongst the people I follow (and as such, the sample chosen), there is little if any effect on image choice from gender, age, or location. Instead, patterns emerge mostly from the sort of content shared on the blog.

Sorting between drawn images and photographs reveals a pretty solid split. Interestingly, the categories themselves split into creator and curator sub-categories.

Curators with a drawn image are usually blogs dedicated to fandom. They also usually do not create their avatar image themselves, instead using screencaps or other fanart.

Creators with a drawn image are always blogs run by artists who mostly create their own content. While some are self-depictions, not all are. Their avatars are usually a quick look at their style/usual depicted subjects.

Curators with a photo image usually either depict themselves casually or choose a photo of something they enjoy. Their content varies between fandom, personal reflection, and photography/art/specific aesthetic themes.

Creators with a photo image usually depict themselves or their work in serious or formal settings. They also surprisingly tend towards black and white images. Their avatars are generally a bit less indicative of their content than artists who have drawn their own icons.

I arranged a subset of images on a spectrum from familiar to abstract. Familiar images were those that seemed to be more recognizable, while abstract ones depicted less easily interpreted images.

Most users clearly tended towards recognizability of some sort, indicating that although they are willing to stretch the bounds of typical profile image, they do not stretch it so much that they lose coherency. Other than that, the types of content and personality of the user did not seem to affect familiarity that much.

*You may notice that not all profile images were used here. Once a clear trend was displayed towards familiarity, I chose to stop adding images since the point was made. Also to save my hand.

Arranging profile pictures on a spectrum from images with a very warm tone to a very cool tone offered little insight into the personality of the users. It may reflect a general trend on the site, due to current aesthetic trend or simply because the site itself has a very cool toned theme, but that's just speculation.

Breaking down the numbers,  ~38% of users use selfies/drawn images of themselves, ~21% use fictional or cultural characters, ~19% use images that are self-representative but otherwise unrecognizable, and ~13% use depictions of objects. (Note: the percentages don't quite add up because I rounded really poorly)

Selfies range from casual to staged and even complexly edited.

Self-representational images are often used by people uncomfortable with a very personal online persona, as well as those opting for a humorous effect.

Fictional characters are often used by users who want to display a favorite show or movie. Usually, they choose a character they feel very aligned with, so it still becomes a form of self-representation for others who are familiar with the character.

Images of objects are mostly used by blogs with a specific purpose or theme. They generally aren't personal blogs.

Tumblr users employ a variety of creative means to represent themselves, often without using an actual image of themselves. Representation throught objects, characters, and other content can offer a surprising amount of information about a person, even without seeing images of their face. Content creators, who post mostly what they have created themselves (ie art, photography, humor) tend to represent themselves through their chosen medium, while content curators chose images that reflect the themes of what they post (ie fandom, specific aesthetic theme). Blogs that are not for personal use tend to use avatars that depict their object of focus rather than personal themes. In general, while many users choose not to show their faces, they do choose images that effectively communicate the blog persona.

In particular, I think this heavy trend towards self-representative rather than actual self-depiction on tumblr is due to the rather impersonal way the site is constructed. Tumblr itself is not built to foster person-to-person interaction the way some social media sites are. Comments on posts are very one-directional, the message functionality is pretty limited, and there is no easy and uniform way to get information about a user by just looking at their blog. Thus, the focus becomes shifted away from the actual person and more on the online persona they craft through their shared content and occasional commentary. Some people use this decentralized approach to construct a wholly different self online, using a pseudonym and explicitly avoiding images of themselves, while others try to work around it with clearly marked places to find brief (or extensive) bios, tags for posted selfies and personal content, and links to their profiles on other sites. Either way, their choice to withhold or expressly share information about themselves can say a lot about the user.

More subtly, the source of the avatar can offer insight into the source of the content of the blog. The two main categories tumblr users fall into are Creators and Curators. Creators are usually artists or makers using the platform to share their creations. They do less reblogging (sharing other people's posts) and more original posting, often including their responses to messages and voicing their opinions on a variety of issues. Curators tend to reblog posts from others, creating a unique collection of content that they enjoy. They are usually frequent users of the site, regularly sharing out images that match their particular taste. As discussed, the creator/curator type can usually be determined at a glance from a user's avatar.

It's worth noting that the collection of avatars I used was rather small and does not fully represent the expansive communities on tumblr. I also tend to follow users that tend towards more personal posts and original content, which may have skewed my particular results. I do think that the conclusions I drew about why users might choose a particular type of icon were accurate, but the number of people using different types of icons/trends in tone/trends in familiarity may be inaccurate. Particularly, I suspect there is a far smaller percentage of people using their face as an avatar, given a cursory glance at the trending posts.

Aside: Not all avatars were used in the images describing a breakdown. Usually, once a particular trend was clearly indicated, I stopped adding images to avoid over-cluttering the breakdown. The unincluded images were considered in all analysis. Additionally, some images were not used in particular breakdowns because they could not be included - ie. neutral black and white images in the warm/cool tone trend depiction. All avatars were included in the column to the left of the main image.

This piece did a very good job communicating the various axis's along which it measured the profile pictures of tumblr users. The images used did a good job in illustrating the distribution of the profile images which helped the subsequent analysis. Something I found interesting was when analyzing the profile pictures, the author of this piece talked about the content of the blogs without giving any clear examples. Statements like "Self-representational images are often used by people uncomfortable with a very personal online persona, as well as those opting for a humorous effect." could have been reinforced by a casual screen shot or some other statement from the blogger. In all, the clean presentation of the content supplemented by graphs helped clearly get the point across and it supported the analysis made by the author.

Observe and analyze tumblr users' unique trends in self-representation through their avatars.