Building on the captured stroke patterns

Made by kaitlinschaer and Kevyn McPhail

With a system for capturing carving stroke data and manipulating it into a pattern in place, we use the mandala designs in two completed artifacts. First, the woodblock print, and second, the layered accordion book.

In this iteration of our motion capture carving system, we have sought to create rich artifacts with the process we have developed.

First, we explored the possibilities of this system for traditional woodblock printing. Using the captured tool paths which were then reflected into the initial mandala design, we assessed the design and the ways in which it could become more dynamic. What further design choices could be made to create a richer image? First, using grasshopper, we added some elements of automatic pattern infill. Where the majority of the design was based on the paths which originally came from the hand, these areas of infill were created almost entirely by the grasshopper program. No manual input was required. It was at this point in the process that the design was converted to GCODE tool paths for the CNC Router, and carved with a V-shaped engraving bit into a piece of plywood. Once the print block was created, we considered a third level of design input. What choices could be made by the artisan, and executed entirely by hand, that would make the graphic image more compelling? While the CNC Router had carved the entire design at a uniform height and thus a uniform line weight, going back into the image with hand chisels allowed introduction of bolder lines. It may not have been clear what elements of the design should have been emphasized when the whole thing existed only as paths in Rhino, but as a physical print block, it was effective to make those decisions manually and efficient to execute them by hand.

Once the plywood print block was touched up to our satisfaction, we printed it by hand with traditional woodblock printing methods. Registration marks were placed on the block, and using ink rollers, or brayers, oil based relief printing ink was applied to the mandala design. Cotton rag printmaking paper was soaked in water, briefly dried so that only the inner fibers remained wet, and applied to the print block according to the registration marks. Finally, the block and paper was rolled through a traditional printing press. The print was produced in an edition of five.

Next, in our interest in exploring the time based nature of this system, we created an accordion book of sorts. For this artifact we slightly altered the method in which we captured the strokes. After every stroke, or a small number of strokes that were similar, the reflected and patterned design was baked out as its own layer. This allows us to easily isolate every element of the pattern, and see how the strokes build on each other in order to create the final design. The accordion book format functions to allow both the viewing of the mandala as one complex image, or the unfolding of the image, to see each individual element. The individual elements are color graded slightly differently, to show a gradient from black to white and create depth.

Each layer of the design, ten in all, was laser engraved into clear acrylic plexiglass in 6x6'' panels. Using different colored inks, we filled and colored the engraved surface of each panel. Once dry, we arranged them into their original sequence, and used a sticky cloth binding tape to arrange them into the accordion book format. 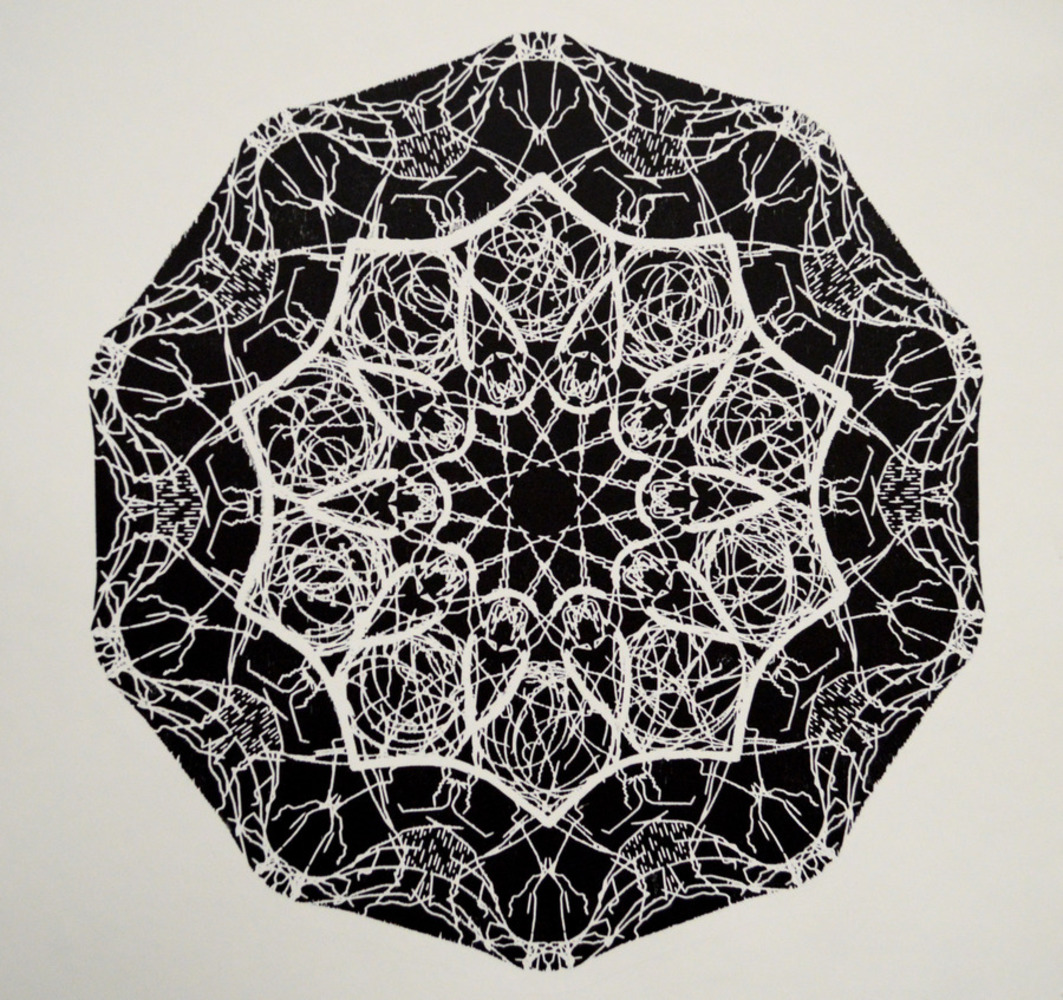 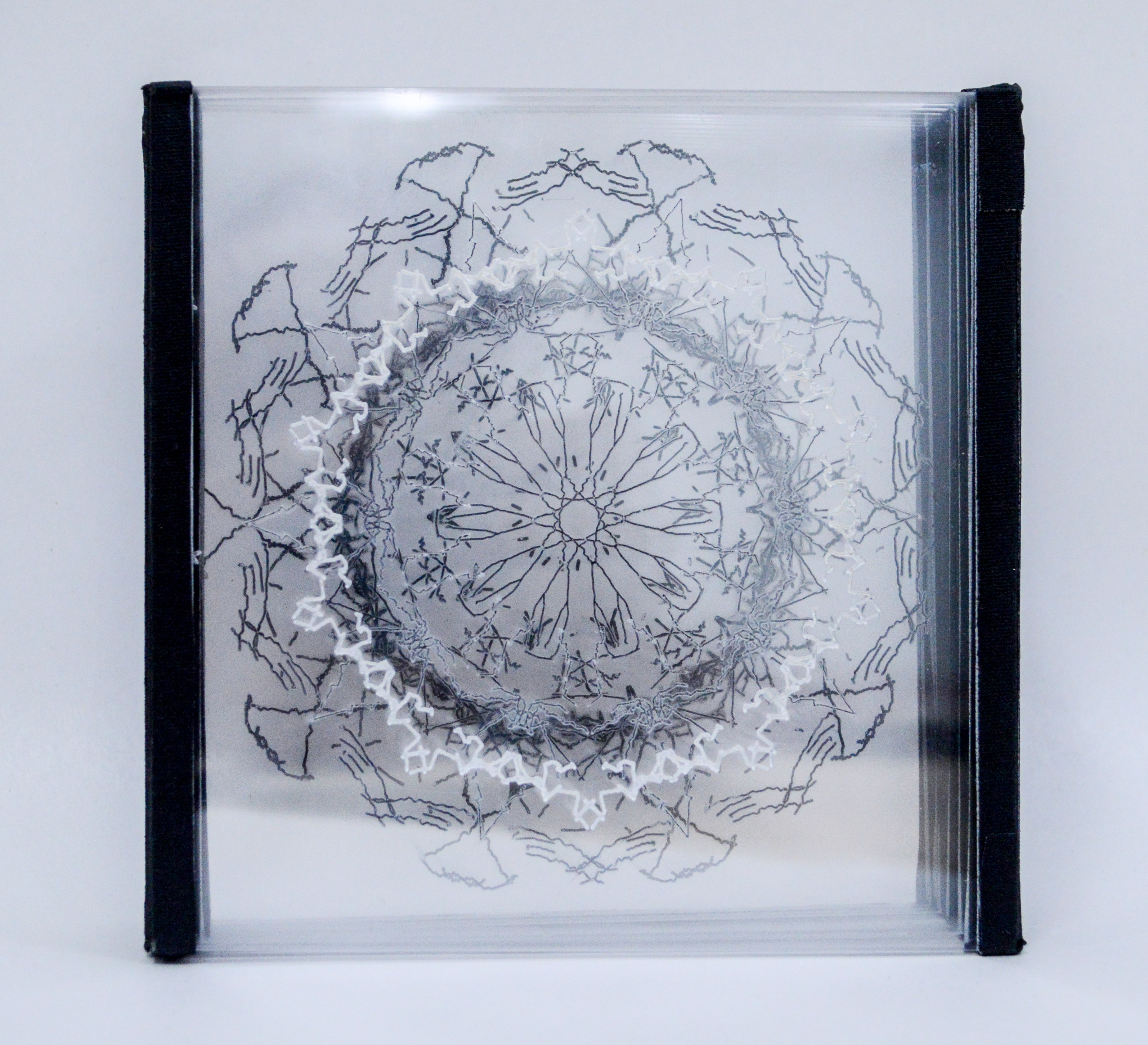 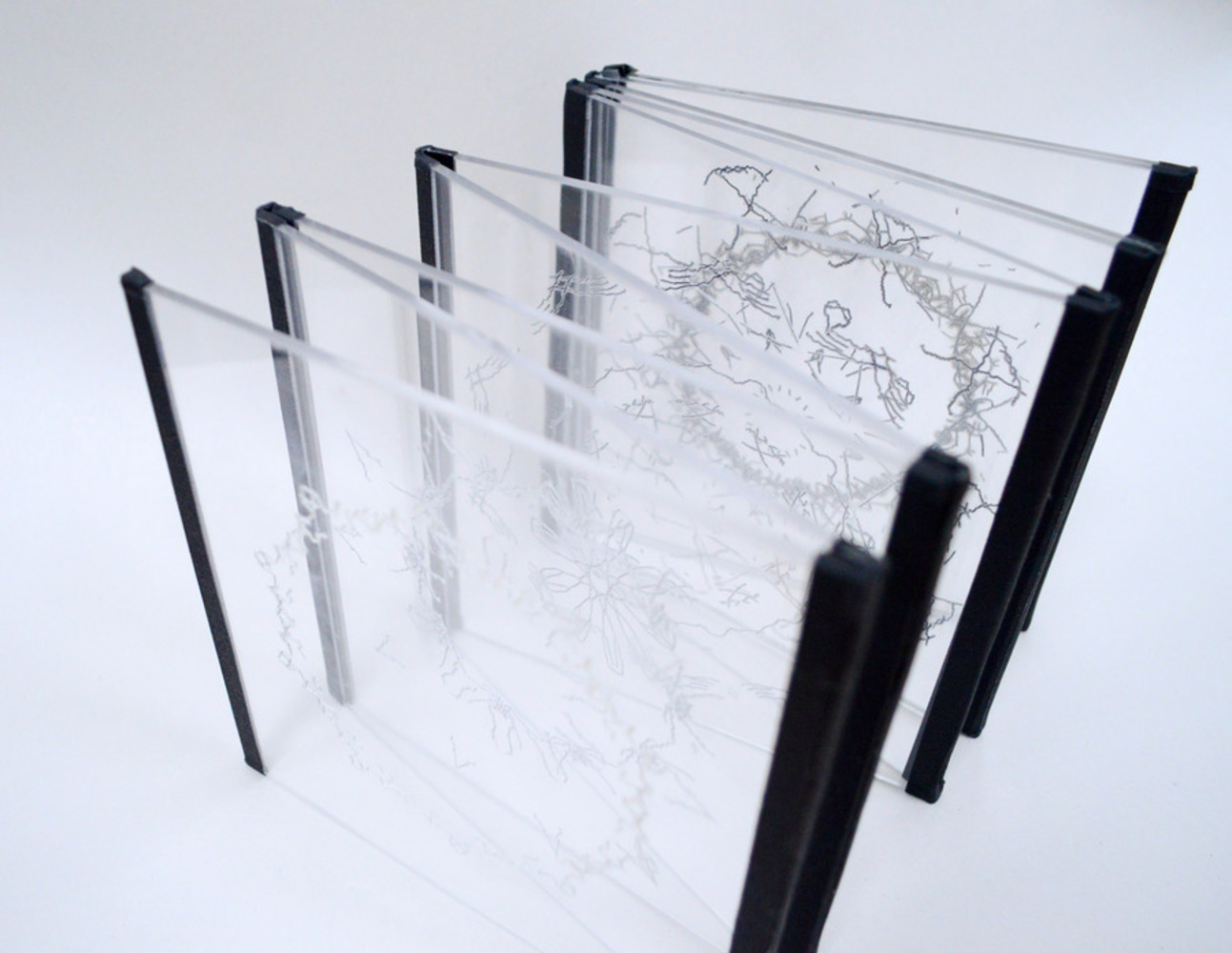 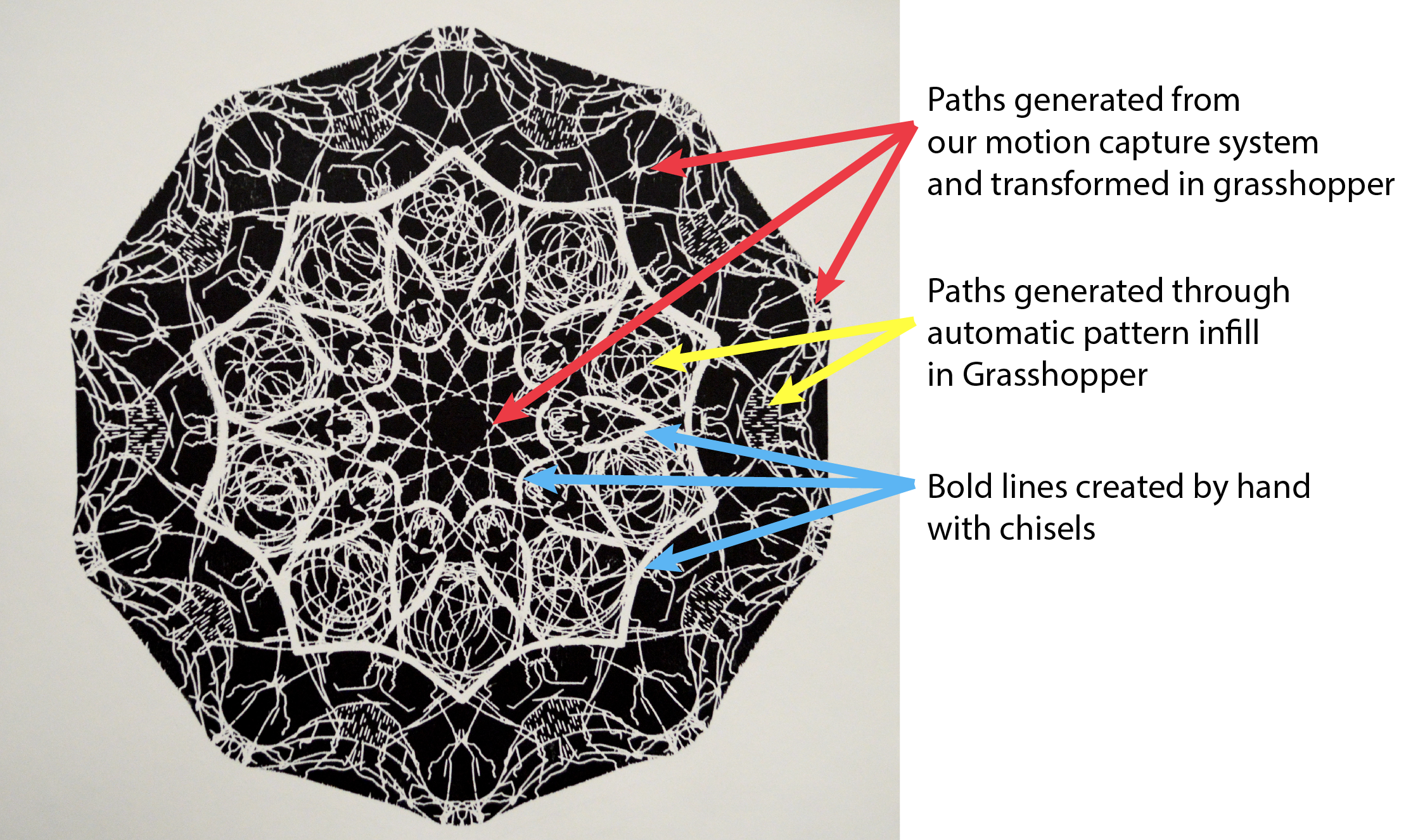 With a system for capturing carving stroke data and manipulating it into a pattern in place, we use the mandala designs in two completed artifacts. First, the woodblock print, and second, the layered accordion book.