PLUME was a project that started out as a joking jab at the heady ideals of biomimetic design. I've always loved biomimetic design, but was interested in how to add levity to a field that's usually concerned with solving major problems through adopting ideas from nature. How could I use biomimicry, a design approach that's made headlines for attempting to solve major problems like world hunger and debilitating illness, and apply it to something a little more playful?

In thinking about this question, I was reminded of one of my favorite nature documentary clips – the scene from BBC's Planet Earth* of the birds of paradise performing their mating dance. It's one of my favorite videos on Youtube because I think it's absolutely bizarre and dramatic and fabulous. Similarly, I also think dating between humans is bizarre and dramatic and fabulous, especially now that apps and websites like Tinder, OkCupid, and Coffee Meets Bagel are changing how dating happens.

Obviously the phenomena of dating between humans and birds share some qualities, so I decided to bring them closer together and build a wearable for humans that could emulate the colorful mating displays of birds. I decided to call it an "app" as a way to position it as a replacement for the aforementioned online dating services. As a 20-something who's currently using these services, I frequently find them lacking. Online dating gives so much control to the user, and automates so much of the interaction, that by the time the date happens some things are already starting to get stale. Creating a wearable that would encourage users to express their feelings in a public and performative setting, rather than something so controlled as a social media platform, was also an area of interaction that I wanted to explore. 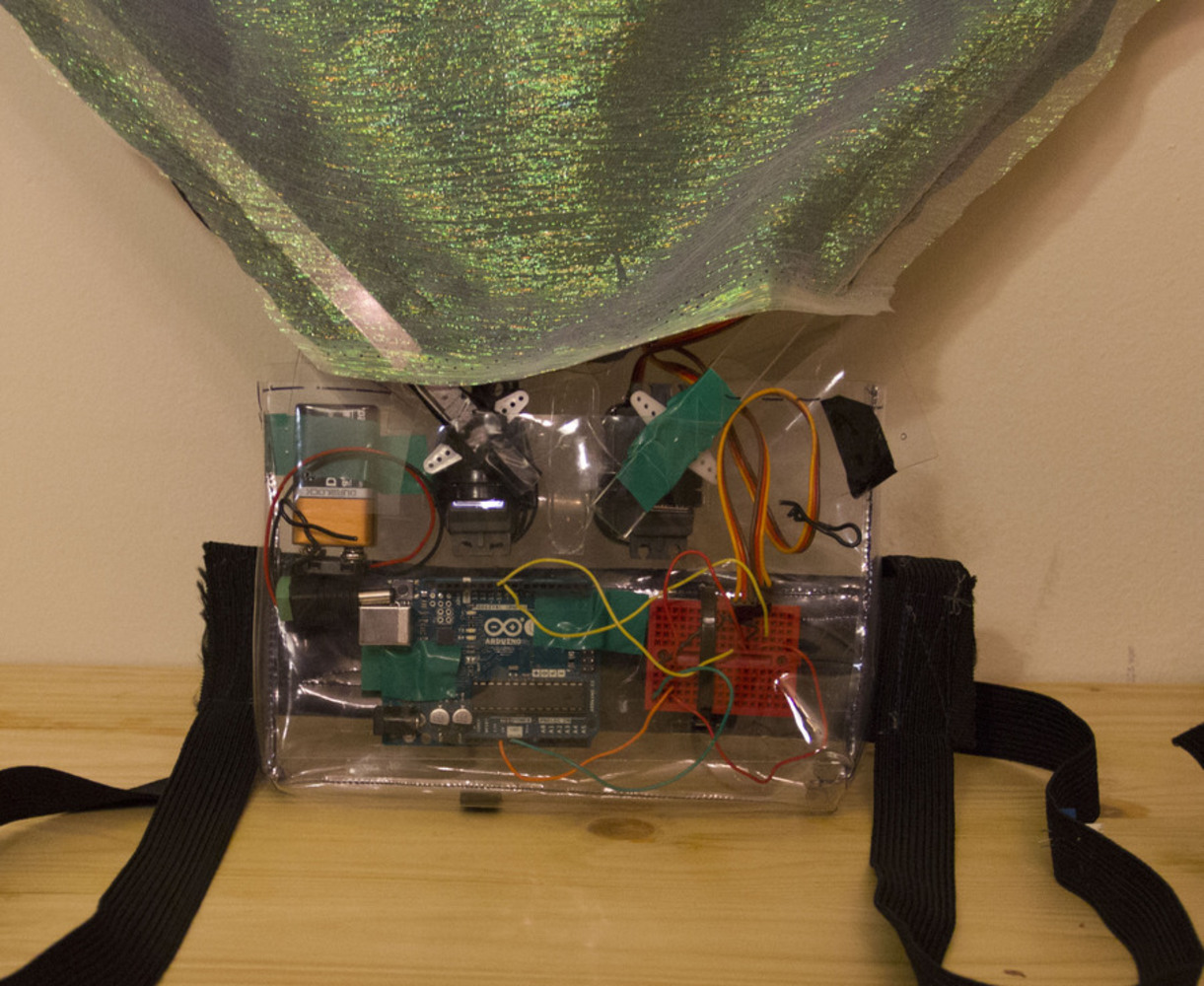 0
Close-up of the Bird of Paradise backpack. 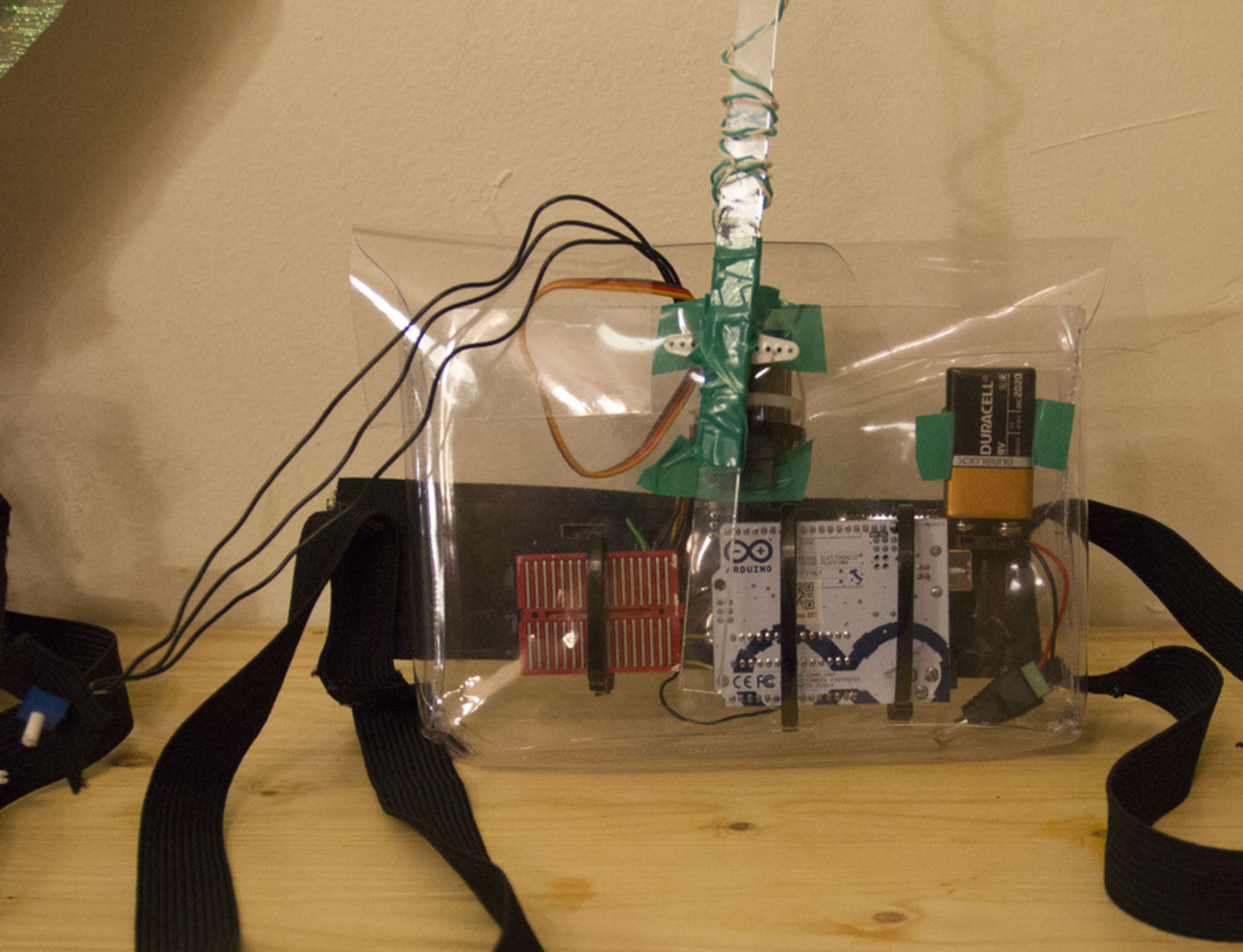 I knew from the start that I wanted two designs so that I could enable a call-and-response interaction between two users. My idea was that a user could wear the "dating app" out to a club or bar and if they saw someone they liked they could signal to them. The other party could then interact with the user as they might choose, or, if they were also a PLUME user, they could use their own wearable to signal back their interest.

To create the wearables I designed two backpacks to hold servos that the user can control via a potentiometer attached to the straps on the front and wired around to the back. I laser-cut acrylic extensions that I attached to the servo arms to extend the servo movement and extensions past the wearer's head, similar to how a bird's feathers might stick out. 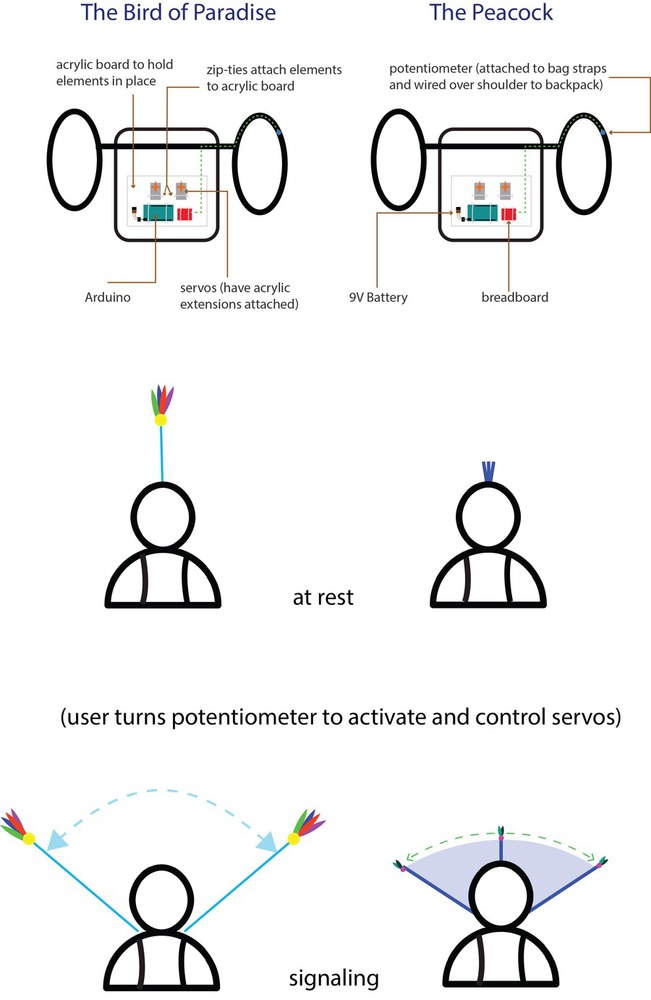 The challenges of this assignment for me were mostly on the fabrication side of things. In my other projects this past semester I chose to explore the challenges of using different sensors as well as programming with Processing and Arduino. For this assignment I wanted to take on the challenge of producing a unique project with quality fabrication. The coding and sensor aspects were relatively easy, and I made sure I figured those aspects out early on in the project. I spent the rest of my project iterating on the design for my backpack, as I had never created a wearable or even sewn before.

I received amazing help from my classmates who helped me learn how to operate the lab's sewing machine and laser cutter. It was exciting to finally have a project that I could share with others when I was finished, and I really enjoyed watching visitors to the class's final show at the Assemble Gallery try it on (which is why I included that footage toward the end of my video). 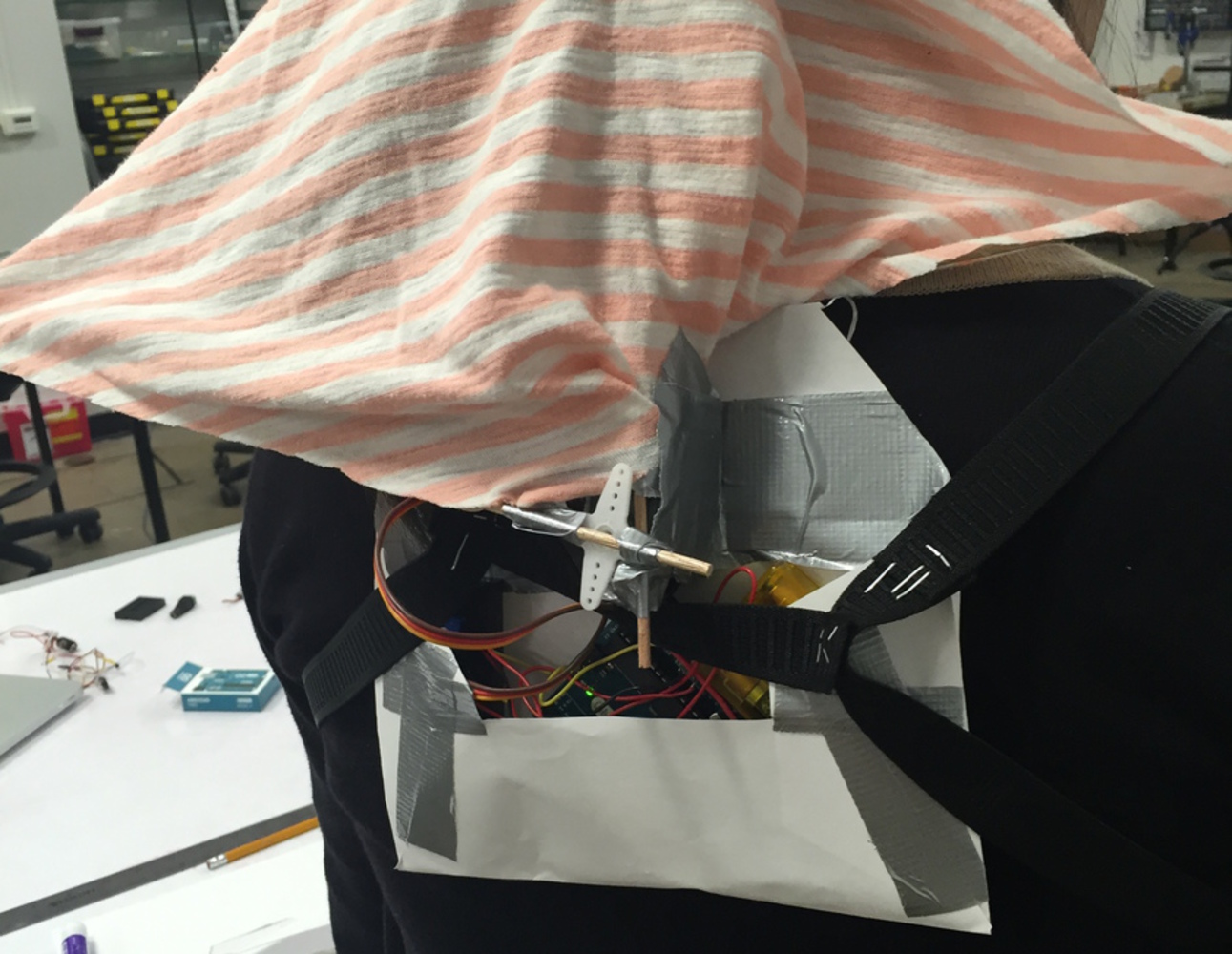 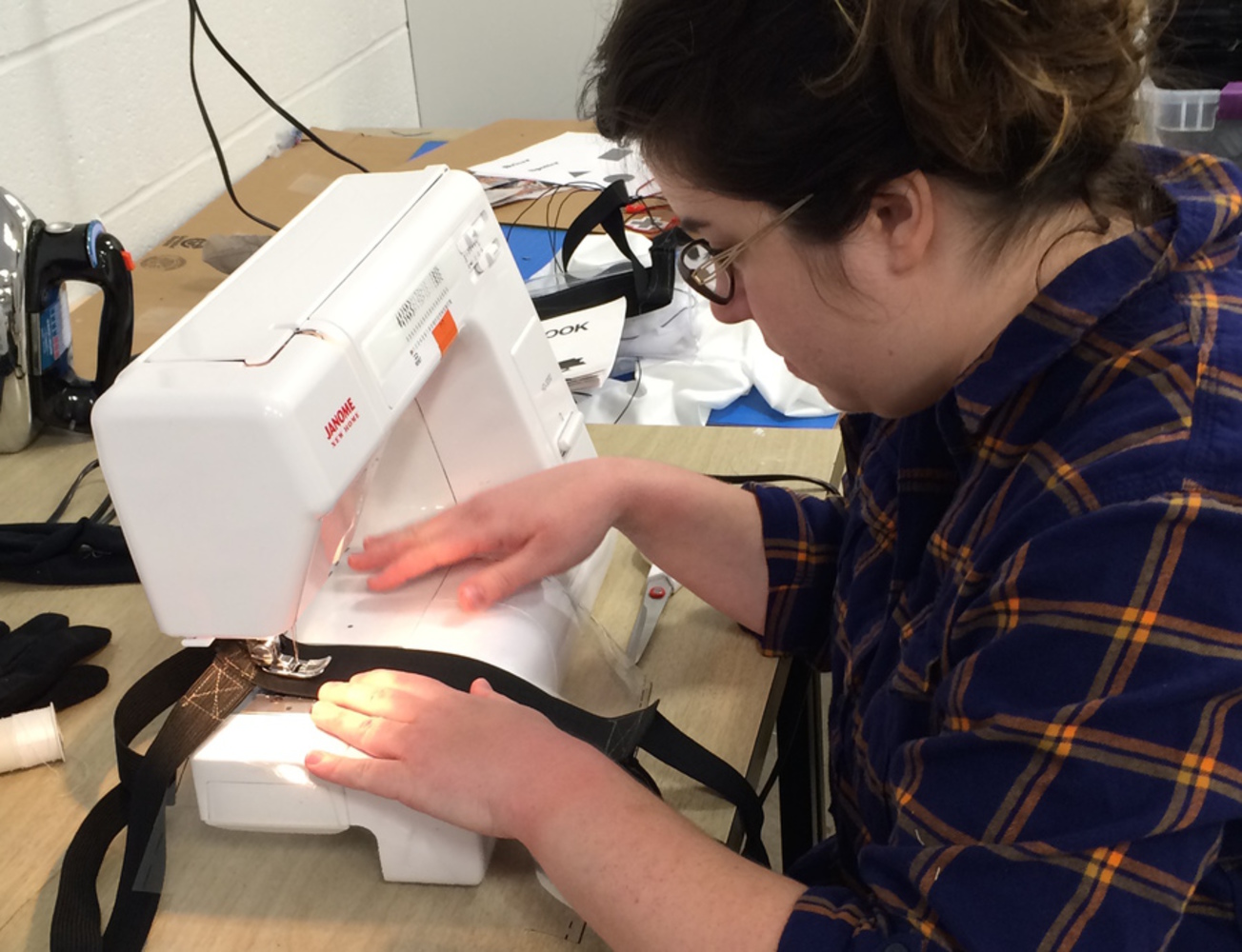 If I could spend more time on this project, I'd like to revisit the activation of my wearable and try a few different iterations. I think it would be a better design to have the automator be a push-button rather than a potentiometer that the user has to twist, and would like to connect it wirelessly to the backpack rather than having to run wires over the user's shoulder.

Another option would be to have the wearable activate via more involuntary signals of attraction, such as an increase in heart rate or starting to sweat. There are a variety of sensors that I could use for this, but would first like to do research into what specific bodily reactions are proven to occur as a result of attraction. I think it would be interesting to implement this into the design because it narrows the gap between human dating habits and animalistic rituals even more.