Made by Jessie Li

Simulates the sound and feel of the beat drop in Radioactive

I selected a clip from the song Radioactive, by Imagine Dragons.

I chose this song because it is one of my all time favorite songs by one of my all time favorite artists. I love how this song is put together; it's eerie, beautiful, haunting, and so powerful, musically. It is a mix between electronic rock, alternative rock, with some elements of dubstep; they way the song is put together is so viscerally powerful. The lyrics, as well, speak to the feeling of waking up one day, seeing life in a new way, and deciding to do something new. I wanted to see if I could recreate the feeling that the song gives me in a physical sense, and what that could possibly look like.

It was difficult to do the entire song, so I concentrated on the first thirty seconds of the song. That way, I could concentrate on the sound and the feeling of the song (over the lyrics) because, while I think the lyrics are a really important part of the song, oftentimes, in music, the lyrics only tell a fraction of the story.

The entire song is attached; but the art concentrates on the first 30 seconds of the song, ending when the lyrics start with "I'm waking up." 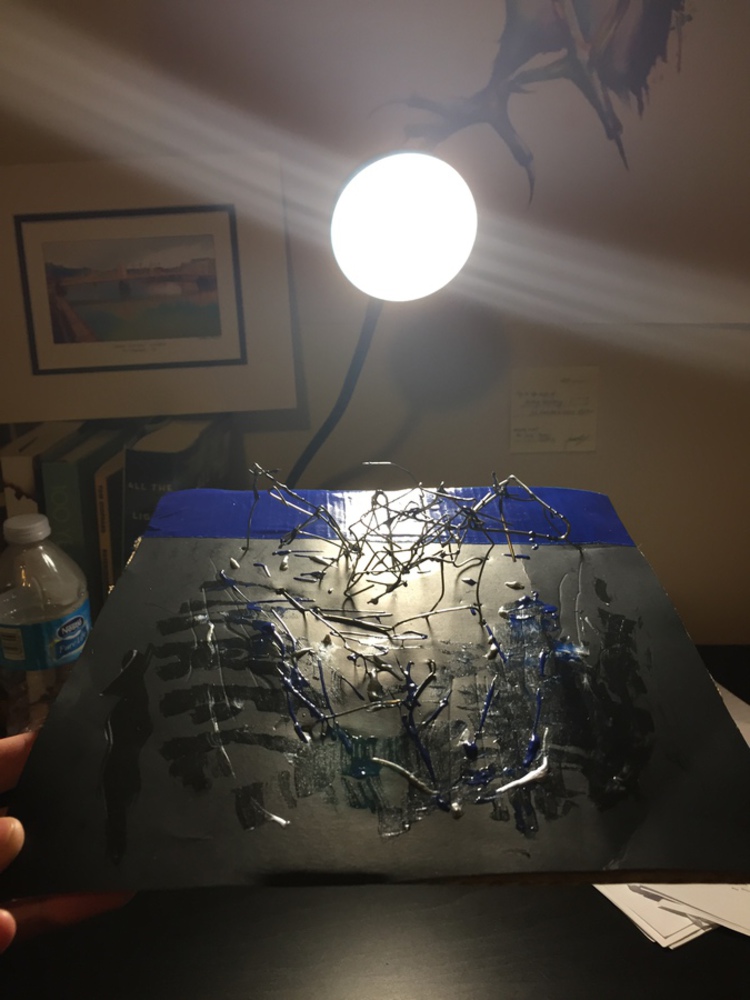 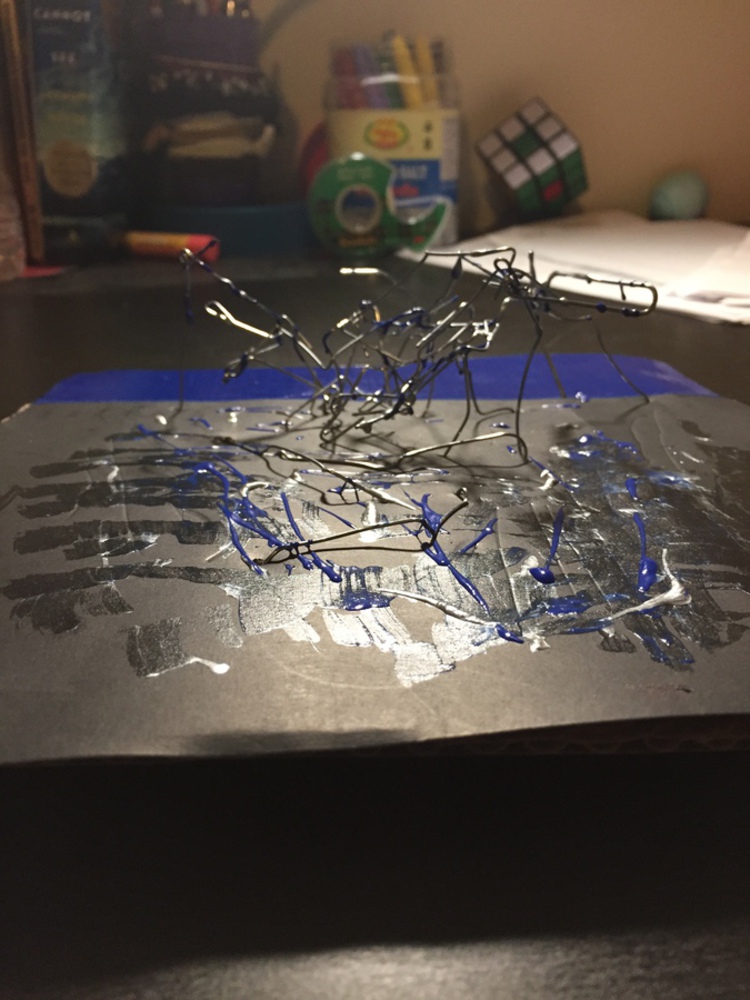 This is the final representation of my project is represented above.

It is composed with cardboard and poster paper, blue duct tape, stiff metal wire, and blue and silver paint for this project. The cardboard (with the black poster paper on it) made up the base, while the metal wire (bent in all sorts of different ways) was used to poke holes and taped to the bottom of the board to keep it in place. The project was then splattered with blue and silver paint, and the area behind the wires was covered with blue duct tape.

I chose to make this product because I felt it represented:

The sound: the first thirty seconds of Radioactive starts off soft, before slowly hitching up to a really awesome base drop that coincides with the words "I'm waking up", which is what my project almost literally represent: a slope of miscellaneous metal wire that sloped up and up until the "base drop", in which it rapidly descended into the blue duct tape (PSA it is really difficult to tell in the photos, I promise it's there, the altitude changes with the wires are really hard to see, no matter which angle I took the photo from).

The feeling: Radioactive starts off with a echoey, ethereal "whoah whoah" tune. It feels insubstantial and unreal, as if it's some background of the dream. As the sound gets louder and louder, the singing gets more and more solid, while, in the background, more and more digital sounds are added (slowly) to keep the anticipation ratcheting up. Then, the singing stops and the pitch continues to get higher and higher, until ultimately, the drop happens. The song creates a feeling of emptiness, and wanting something more, that steadily increases with each passing second, and is only satisfied at the drop and the beginning of the lyrics. In my project, I started off with wispy trails of blue and silver paint and slowly start adding metal wires as the slope gets higher and higher (to add the feeling of substantiality) before hitting the dropoff, in which the board becomes blue.

The message of the song: The song itself, is, as describes above, about waking up and seeing everything in a new way to completely change your life. I felt that the product I made represents that sort of feeling; I picked the colors blue and silver because of what they represented: blue is oftentimes associated with stability and calming, and silver is oftentimes associated with new things, so I interpreted the combination of both to mean a new sense of stability and purpose. As you approach the drop, there's slight glimmers of color, but only after you read the top and hit the drop do you find where you're supposed to be (the blue). This is reflective of what I think the song is trying to portray; that feeling of approaching the moment when you wake up and opening your eyes to see something new. The first lyrics are even "I'm waking up."

How did you approach the assignment and re-creation of the work in a physical medium? Cite examples that informed your approach.

I approached the project with some apprhension, because I have never done anything like this before. It was difficult choosing a sound, because there were many sorts of sounds that had some sort of meaning to me. I almost settled on the sound of my clock ticking in the quiet hours of the morning, because it was such a familiar sound to me, and yet was a background thought most of the time; I thought maybe creating something out of that idea would have been interesting. In the end, I decided on Radioactive, because I thought I could incorporate a message that I have a deep personal connection with into the work. After settling on Radioactive, I had to decide how to represent the sound.

My biggest influence on this project was the artist Nathalie Miebach. The website for Natalie Miebach is here:

Much of her art centers of looking at sheet music and and transforming her art into whimsical little wire creations. I got the idea to use wire to make my project from Miebach; I thought that the idea of wire, which is, in itself, such a flexible material capable of meaning so much, was brilliant tool in which to work with. In addition, it adds a structure without taking away a content; for this reason, I wanted to work with wire for my project.

In addition, I took the idea of mapping a sound frequency/intensity from the Sound/Chair, from 2007, located here:

The idea shaped my idea to create a form based on frequency and intensity of the sound.

Combining both of these ideas, I proceeded to play around with color meanings and how I would present my project, before finally making the project. It was a different experience creating something that I actually used my hands for; it was surprisingly difficult to get the wire to stay in place in shape in a three-dimensional space.

I think I captured the content and aesthetics of the audio to at least some capacity. It's hard to associate a sound with just some sort of visual image, which I found out; an art form can me something to you, and something completely different to someone else. There are definitely many different ways I could make this better; I wish I had access to better materials (cardboard, poster paper, and some paint isn't really the best set of materials to begin with) and that I had more time to really flesh out the little details of every single part of the song. In addition, I have some slight regrets about using a song I was very familiar with; I think, in many ways, it skewed my ideas of how to make it into a physical form, because I was always thinking of the lyrics of the song and how I could incorporate a message, rather than focusing purely on the song itself. It would be an interesting exercise to try and transform a pure sound into a physical form, and then to transform a set of lyrics into a physical form: I wonder how these two play off of each other, in respect to trying to translate an actual song to a physical form? (This would not have been an issue with the clock...). Not sure.

All in all, I had a lot of fun with this, and definitely enjoyed making something with my hands, for a change.

I really like your project! Although by merely looking at your prototyped result I wouldn't have guessed that it's a representation of the song Radioactive, since it's so abstract, I do think there's a very strong connection between the audio and your product. You made a good choice choosing the dark color and metal wires to match the song, because they add a radioactive feel. The metal wires are very nice materials to represent how one feels elevated and ready to start afresh. Good job!

Simulates the sound and feel of the beat drop in Radioactive