Made by Ricardo Tucker

To analyze a collection of 50 profile pictures based on their characteristics/attributes.

For this project, I randomly selected a group of 50 profile pictures to see how people chose to portray themselves on social media. This consisted of me simply going down my timeline and selecting the first 50 people that appeared on the list. Although I expected this method to have a bias towards people I have met in college, I wound up with a pretty decent balance between college and non-college friends.

The first thing I checked was whether or not the person's profile picture was just of themselves, or if they chose pictures with either another person or group of people. 27 people out of the 50 had pictures that only featured themselves, which is just about an even split. I was expecting this, as many people like pictures of just themselves to avoid confusion about which person in the picture the profile belongs to, while other people choose to have them either with close friends, significant others, family, etc.

Next I decided to check whether people's pictures included an advertisement for some kind of organization or activity. This result turned out to be much lower, only applying to 10 out of 50 pictures, with only one picture being a graphic of the club that did not include an image of the girl herself. Most of these photos were of the people participating in the organization/activity, with the main advertisement part being in the description instead. Still, if this statistic is true of all profile pictures, that is a significant number of advertisements that we are exposed to just from social media.

After hearing about the statistic about filters adding traffic and interaction to photos in class, I decided to track how many profile photos have apparent filters or edits to them. 23/50 people having some sort of apparent edit to their pictures, I was expecting that number to slightly higher. However, many people did have nicer photos taken with higher quality cameras, so pictures like those may have been edited as well without obviously seeming like it.

Lastly, I checked all of the pictures to see how recently they were taken. There was only one picture that was a childhood picture, otherwise the other 49 were taken within the last year or two. This makes sense, since many people will typically update their profile pictures every few months or so. 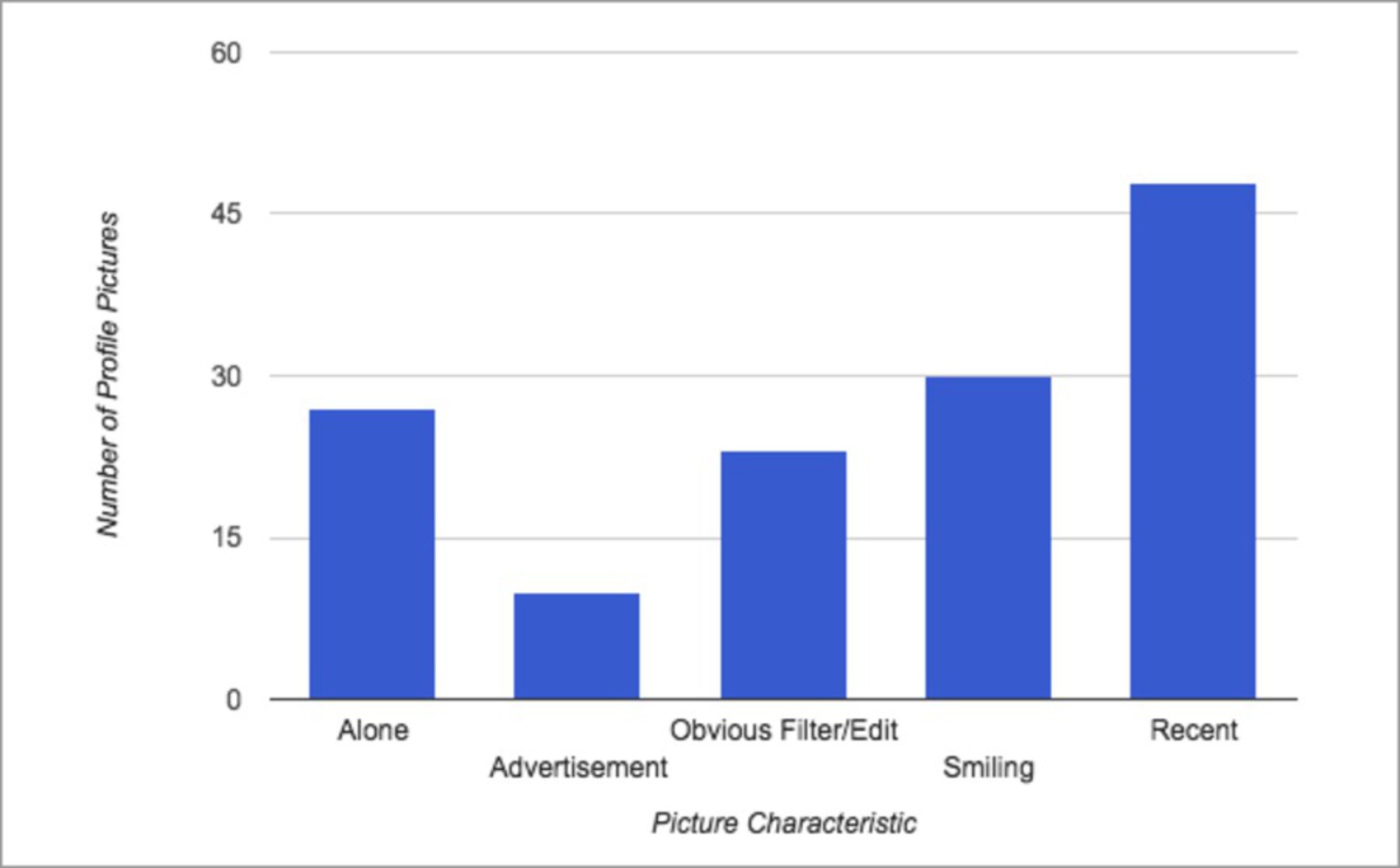 This post had a lot of data taken from profile pictures, including: number of people presented, filters, smiling, date posted, etc. It was organized really well in the google spreadsheet and I thought the graph was a nice touch.
Although the data recorded was very impressive, I felt that the analysis was a bit lacking. I think this post could greatly benefit from more analysis. For example, in your first data point, number of people in profile picture, you mentioned how you expected this and gave a plausible hypothesis why that was so, but the rest of the data didn't have as much analysis aside from stating what you found.

To analyze a collection of 50 profile pictures based on their characteristics/attributes.