Made by Audrey Banks

Split-flap mechanisms used as a platform for animation 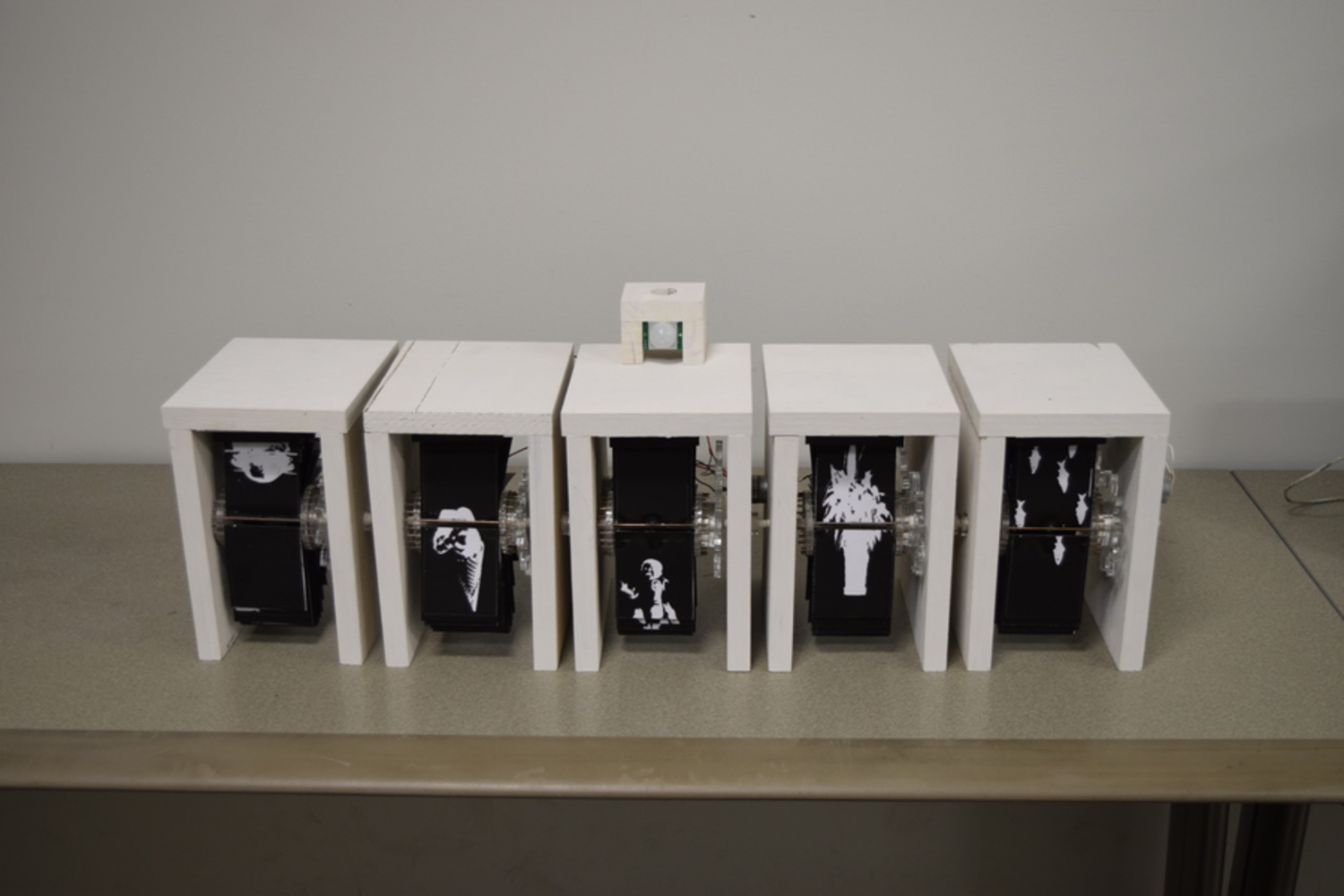 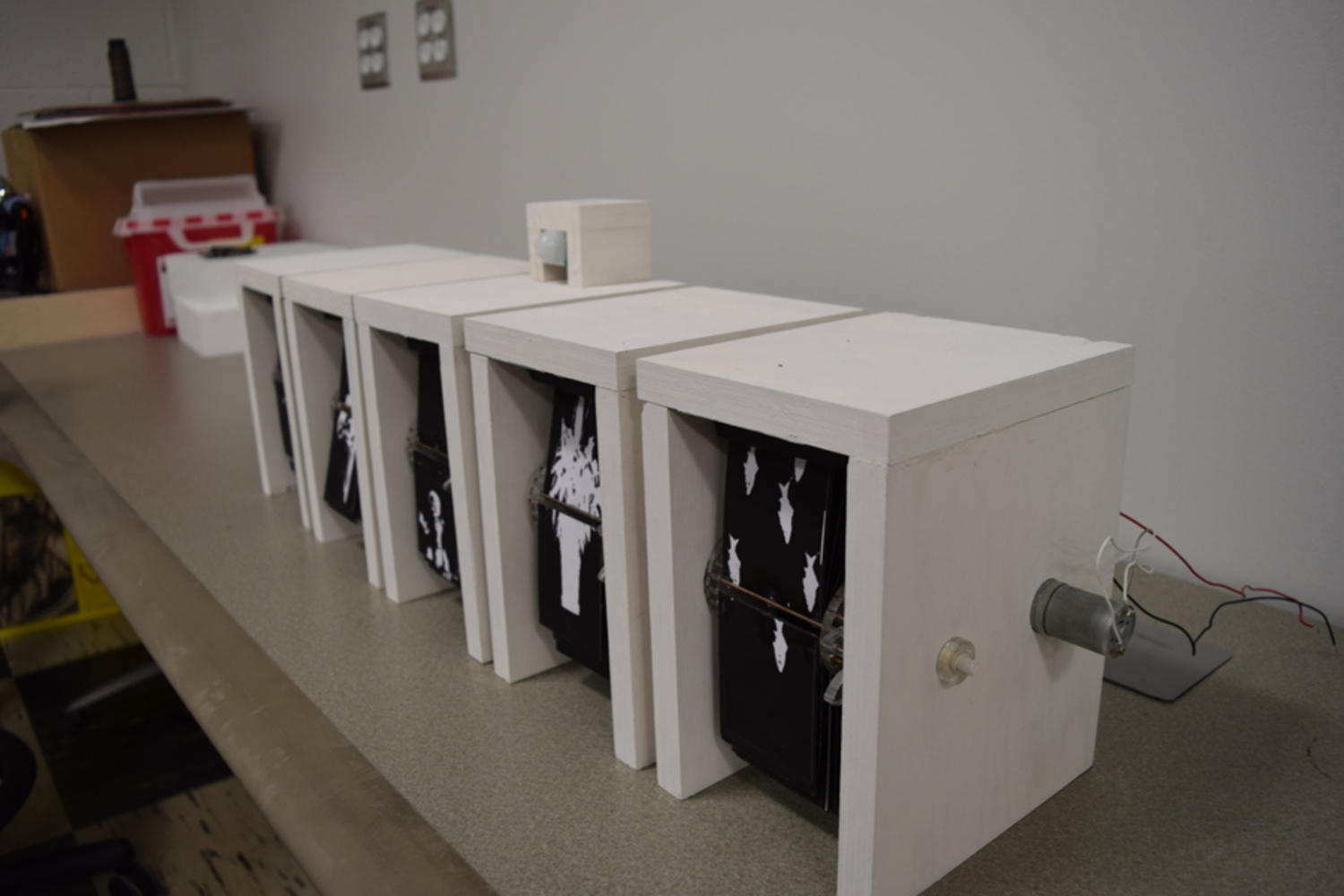 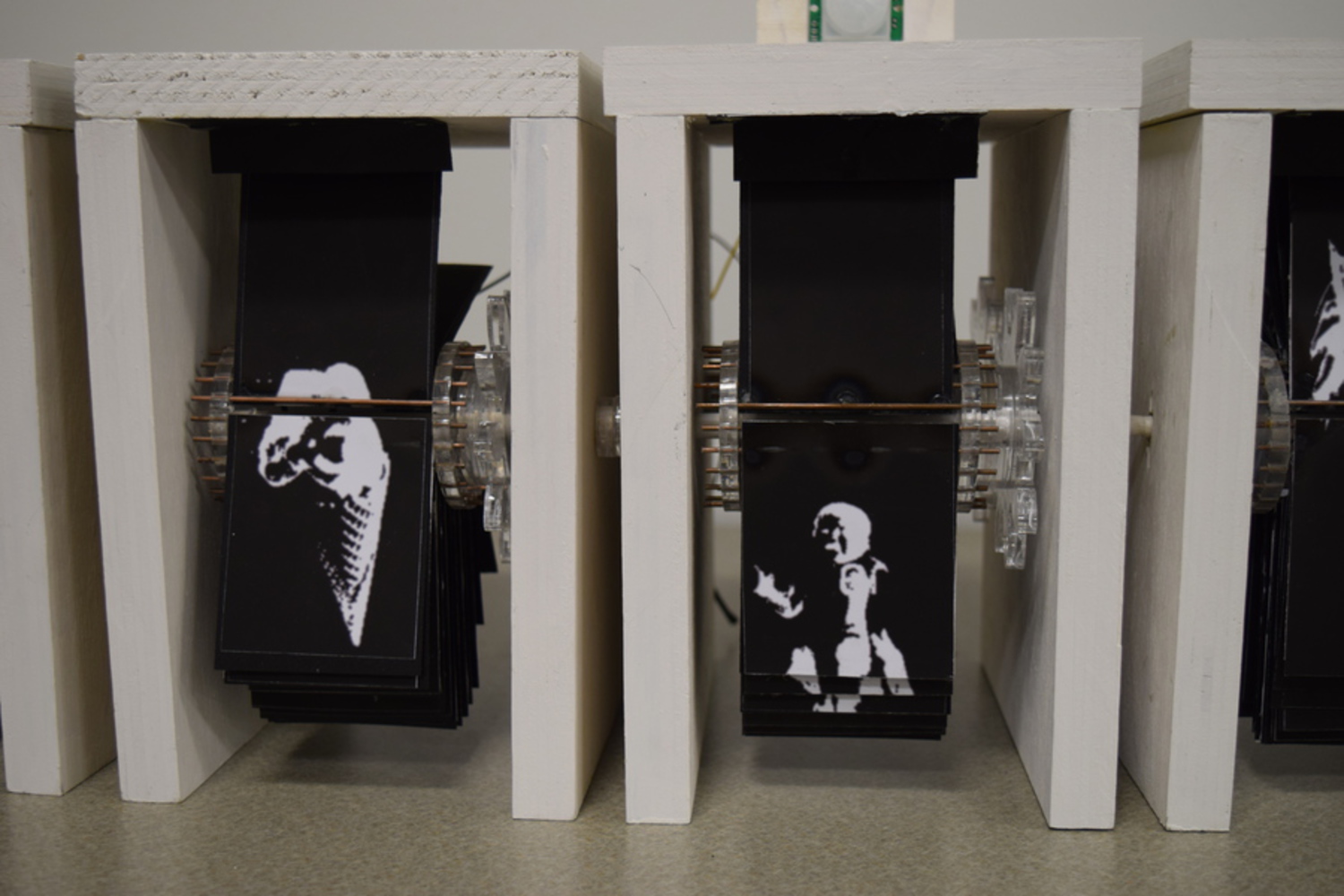 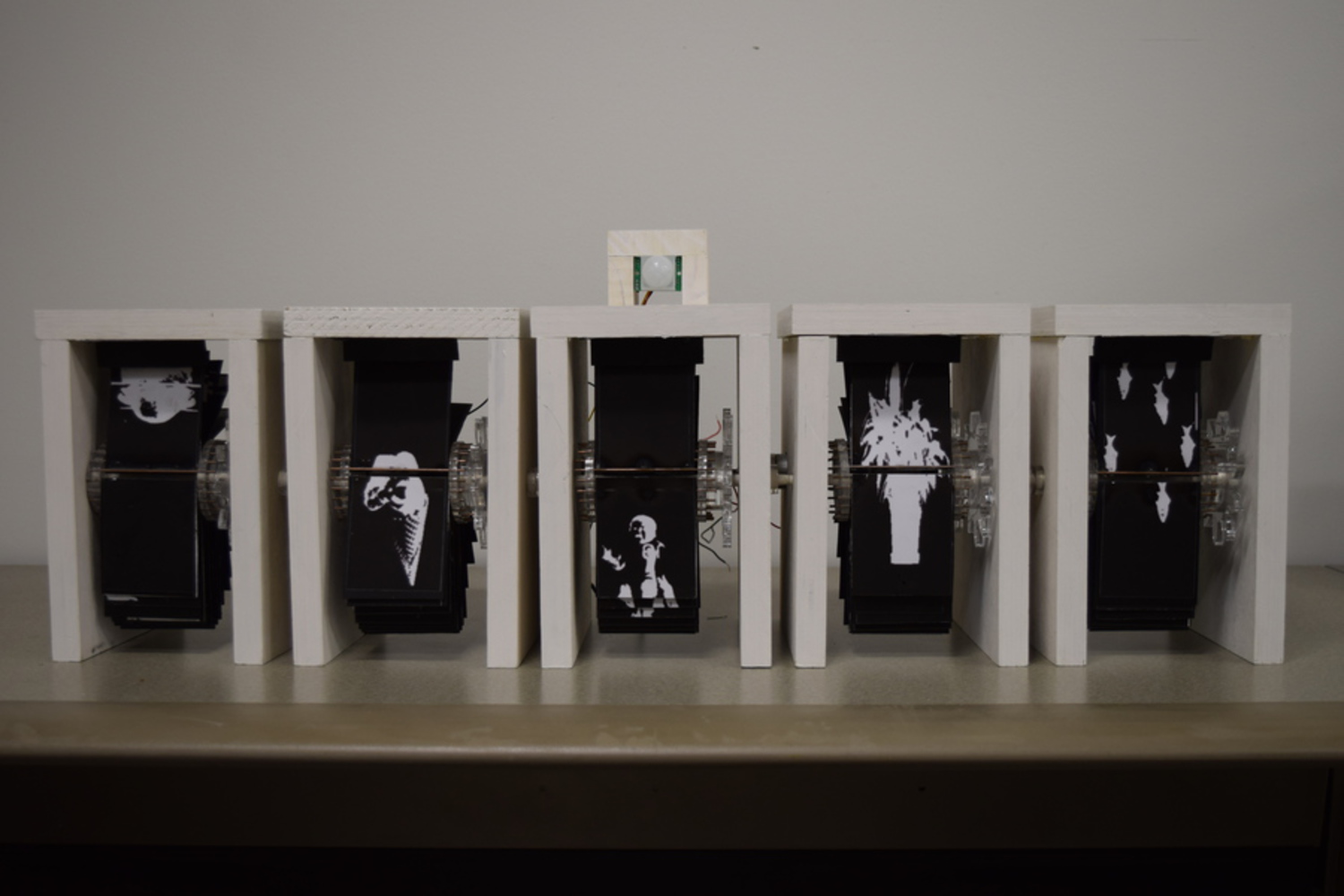 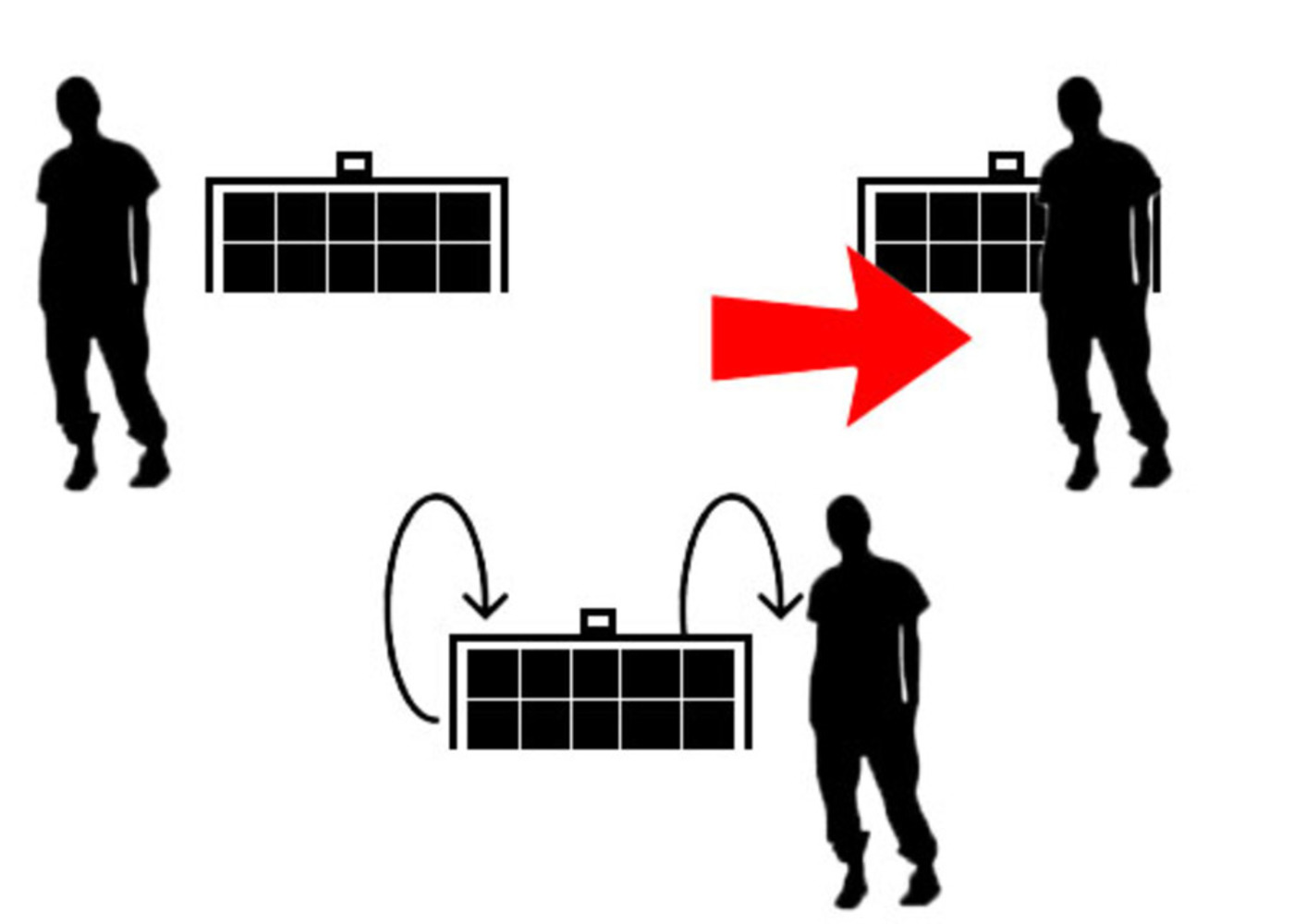 A series of 5 animated flipbooks, automated using the split-flap mechanism found in announcement boards in train stations and airports. The flipbooks are motion-sensed, and are triggered when movement is detected.

The most difficult and involved part of this project was the fabrication. The split-flap boxes were constructed out of wood, carefully designed to hold 5 gear motors and dowels between each box. The flaps themselves are plastic, with the imagery printed on adhesive and stuck onto the flaps. The flaps are attached to welding rods which then insert into two laser-cut acrylic wheels with holes in them. The wheels are adhered to a gear which is spun by another gear stuck onto a gear motor.

Through the fabrication process, I learned a lot about the sensitivity of torque and how delicately mechanical parts have to fit together. The design and redesign of the split-flap mechanism was the most challenging part of the project--making sure that all parts fit together and created the desired movement was a very long and tedious process.

If I had three more weeks I would spend more time on the input and software of the project. Originally I wanted the imagery displayed on the split-flaps to represent some sort of data, specifically someone's emotional well-being each day, evaluated over a course of 7 days--a weekly calendar. I would build 2 more split-flap displays and probably change the animations on the flaps to be representative of emotional states. Then, I would use input from sentimental analysis software to determine the imagery displayed on the flaps. This would also most likely require the use of a stepper motor instead of gear motors, for more precision.

Split-flap mechanisms used as a platform for animation