Made by Julianne Igbokwe

A night light that can be turned on with the squeeze of a pom-pom. The goal of this project is to design a battery powered LED light that uses a pom-pom for a switch. The pom-pom, made of conductive yarn, is mounted to an arduino that uses an infrared signal to turn on a light. 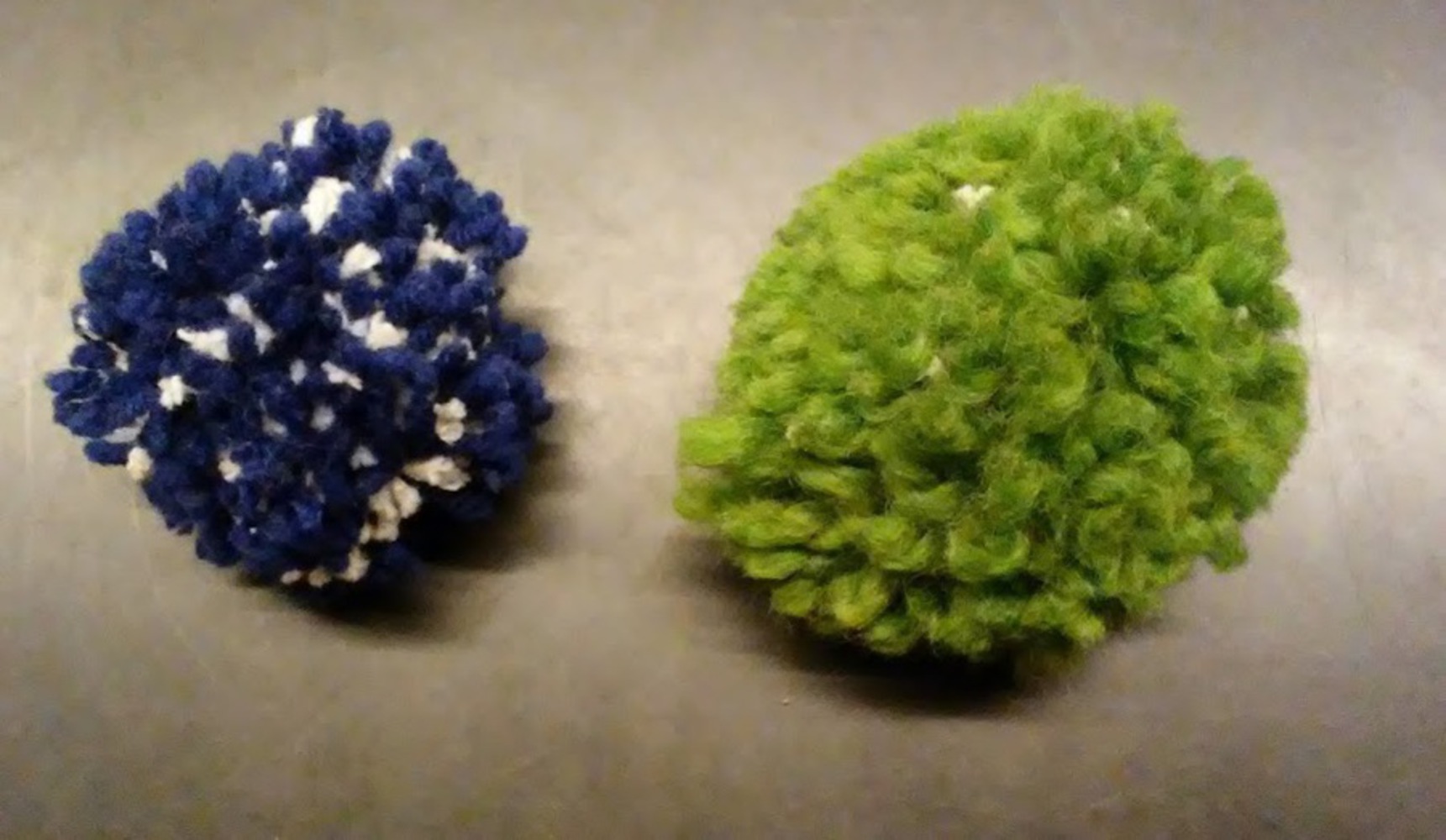 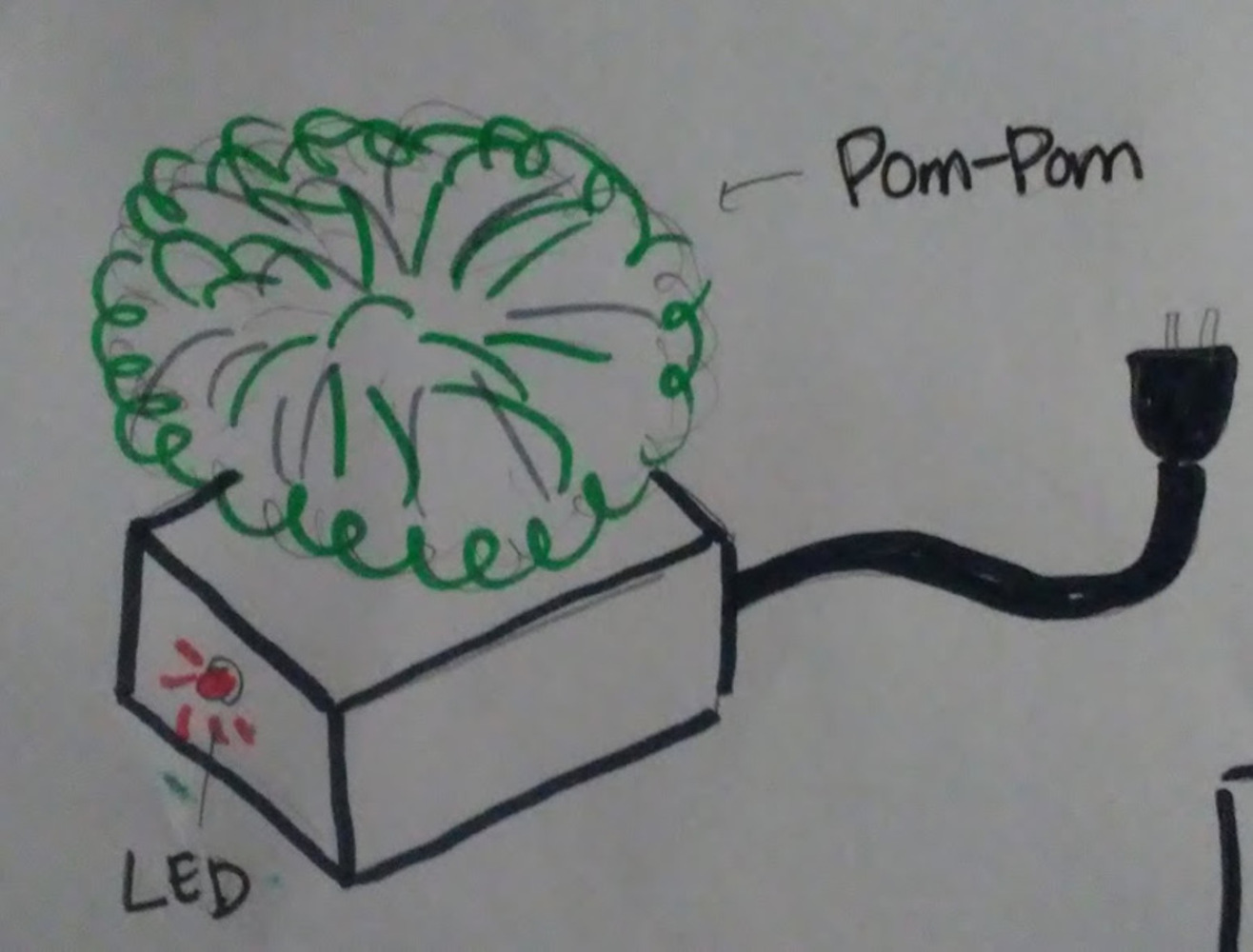 Inspired by the pom-pom switch circuit that was demoed in class, I want to build a light that could be operated in the same way. The finished product would essentially be a squeeze activated remote that turns on and off a small light. This project would combine skills I learned in this course (making a pom-pom and basic circuitry) and my interest in mechanical engineering.

First I made the pom-pom using regular and conductive yarn by wrapping it around a pom-pom maker. The pom-pom acts as the switch because squeezing it brings the conductive yarn in to contact, closing the circuit.  This "switch" can be connected to a circuit using cut an stripped alligator clips. The pom pom would then sit on top of a box that houses the electronics. This box would be laser cut out of a light would that could be engraved or stained. Acting as a remote, the box would contain all the components necessary for emitting infrared binary signals: an LED light through which the infrared signals are emitted, a bread board with resistors, and arduino hooked up to a power supply. The arduino would be coded to understand the squeeze of the pom-pom as an input, and to shine out an infrared signal in response.

On the receiving end of this signal would be the light. A large light bulb or LED would be mounted on top of another laser cut box base. Inside the base of the light, there would be a photo receptor to receive the signal from the pom-pom remote. This photo receptor would be behind a clear acrylic window in the base, and it would be wired to another arduino/breadboard/battery set. When a signal is received, the light would turn on, and another squeeze would turn the light off.

I am very excited about the skills I learned in this class. As a complete beginner, I look forward to developing my ability to sew with a machine and by hand. I am very interested in fashion, so I can see myself applying what I learned to make or alter clothing. What we learned about conductive textiles and circuits will also definitely be very useful to the mechanical engineering projects i'll do in the future. These skills are needed for making wearable controllers for a variety of uses.

I plan on finishing my first iteration of the project I described above, then improving it by using a more attractive design for the remote. I hope to come up with a way to embed the electronics in a plush toy. This way I could try making a stuffed animal, and the remote would be way better looking and can be kept in my bed. 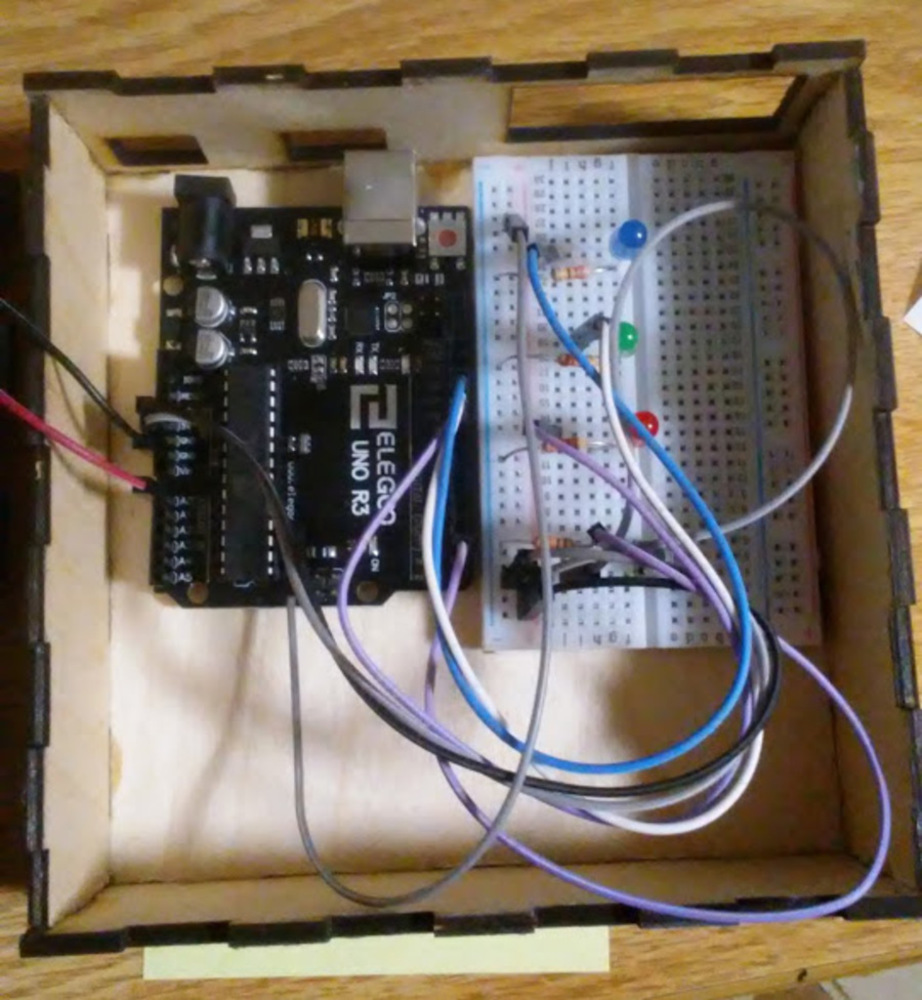 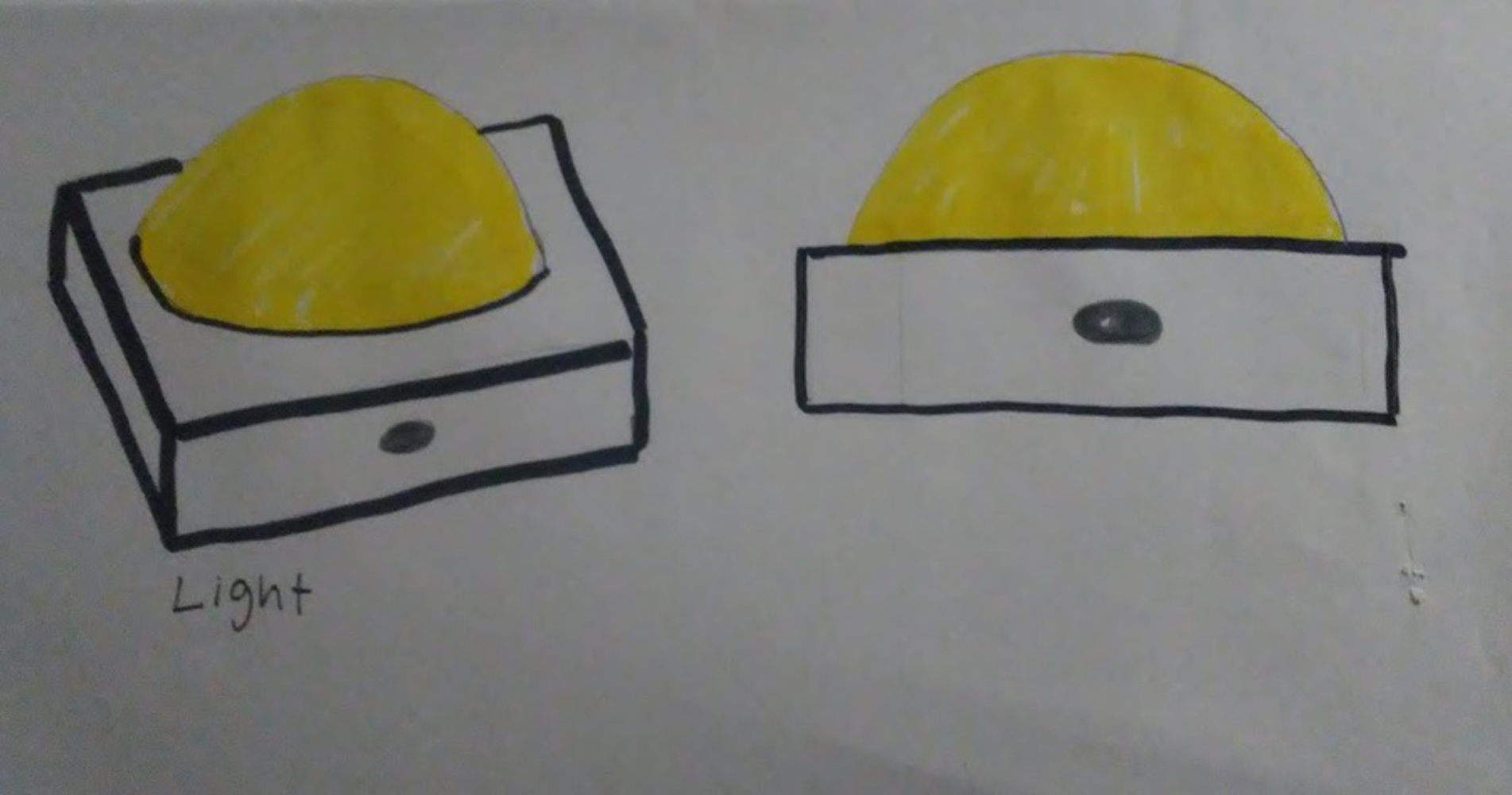 0
Bird's eye view of box base 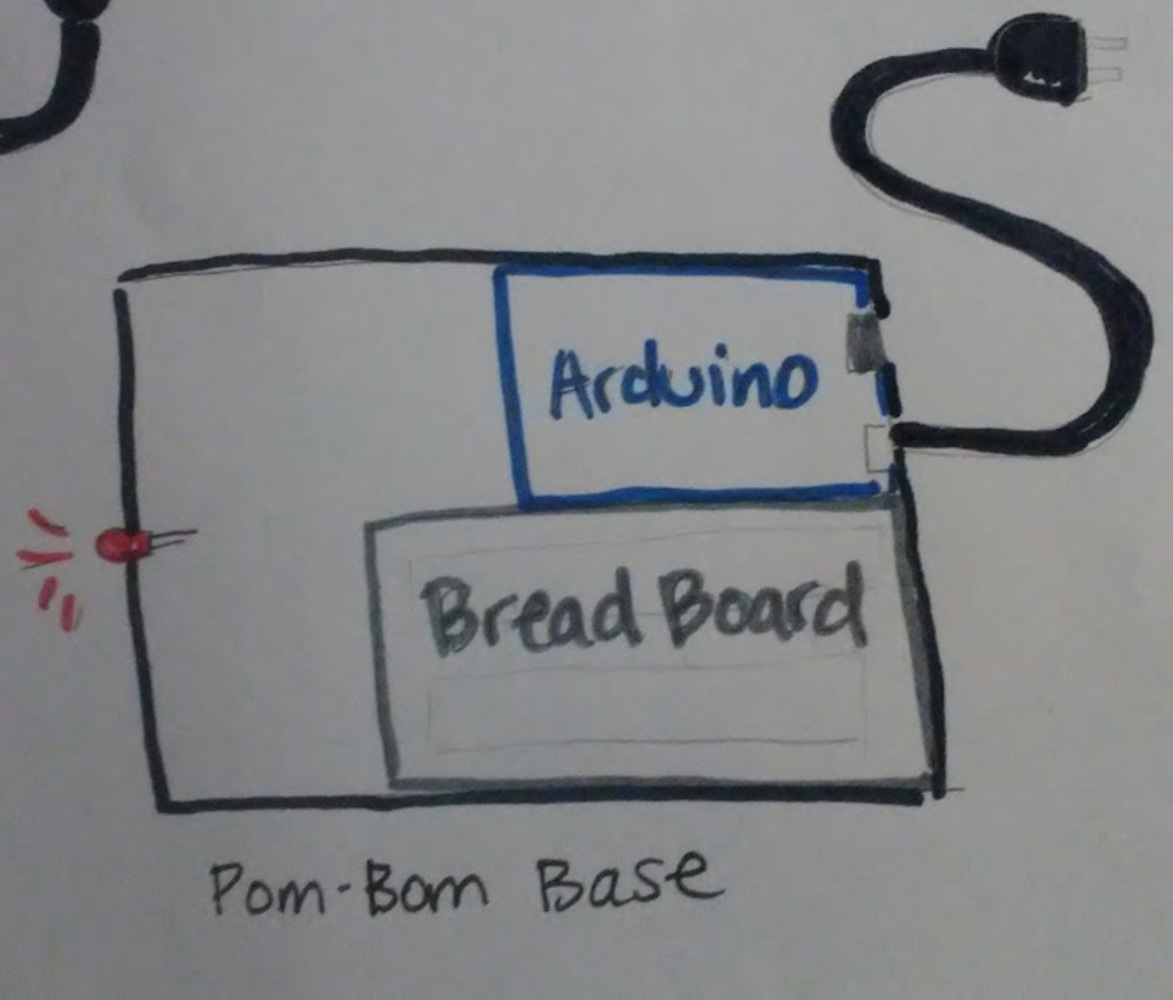 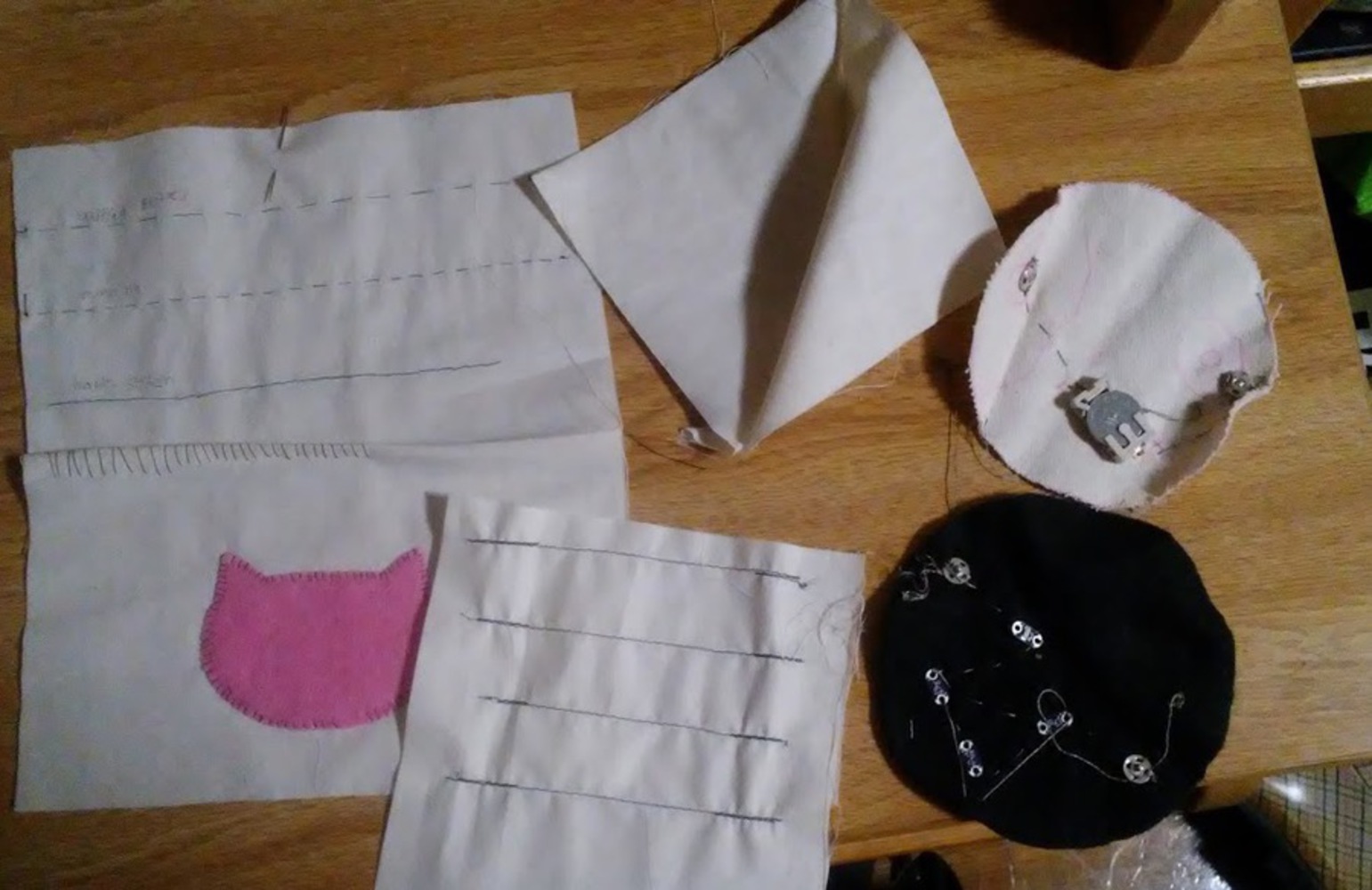 A night light that can be turned on with the squeeze of a pom-pom.

The goal of this project is to design a battery powered LED light that uses a pom-pom for a switch. The pom-pom, made of conductive yarn, is mounted to an arduino that uses an infrared signal to turn on a light.