Made by Lu Zhu

To have a better understanding of cycling environment at Shadyside regarding physical and social characteristics through exploration of a series of urban data.

Shadyside is an historically wealthy neighborhood with interesting mix of social groups live in and around the neighborhood, including students, scholars and high net worth people living in the neighborhood. Based on the preliminary work on bicycle crashes from 2004 to 2015, the visualization work shows a concentration of bicycle crashes in and around the neighborhood. It would be an interesting area to further look into the data as the area closes to large regional employment centers, different types of bike commuting activities would generate along certain streets. The story reflected by visualized data could be used to help improve the bike commuting or leisure use infrastructure.

1) Population Density: To indicate the possible intensity of activities in and around the neighborhood by population density, which may also indicate a potential cycling population.

3) Household Income by Census Tract: To indicate the demographic of potential cycling population, although not knowing where cyclists come from and go, it still give a sense the crashes happen in what type of neighborhoods.

4) Pittsburgh Street Tress: To explore if any correlation between street scape and crashes location.

7) Land Use: To explore the location relationship between land use type and bicycle crashes.

The majority of data processing, including density calculation, data filtering and sorting, etc., was done in ArcMap through attribute table manipulation. There are limited coding data filtering process involved, except sorting out necessary data columns for exporting to csv file format purposes. The general code for extracting household income and order them by ascending order include following:

However, excel might be easier to do this part of work.

4. Loading land use shapefile to ArcMap or Carto (zipped), and visualizing land uses by different colors.

5. Loading street tree data into ArcMap or Carto, and visualizing the data by longitude and altitude data.

7. Loading crash data into ArcMap, filtering out all bicyclist involved crashes. Then visualizing it by longitude and altitude data.

8. Filtering out all intersection related crashes, and exporting it as a new layer.

9. Filtering out all running light/stop sign related crashes from bicycle crash master sheet, and exporting as a new layer.

10. Filtering out all bad street illumination related crashes from bicycle crash master sheet, and exporting as a new layer. 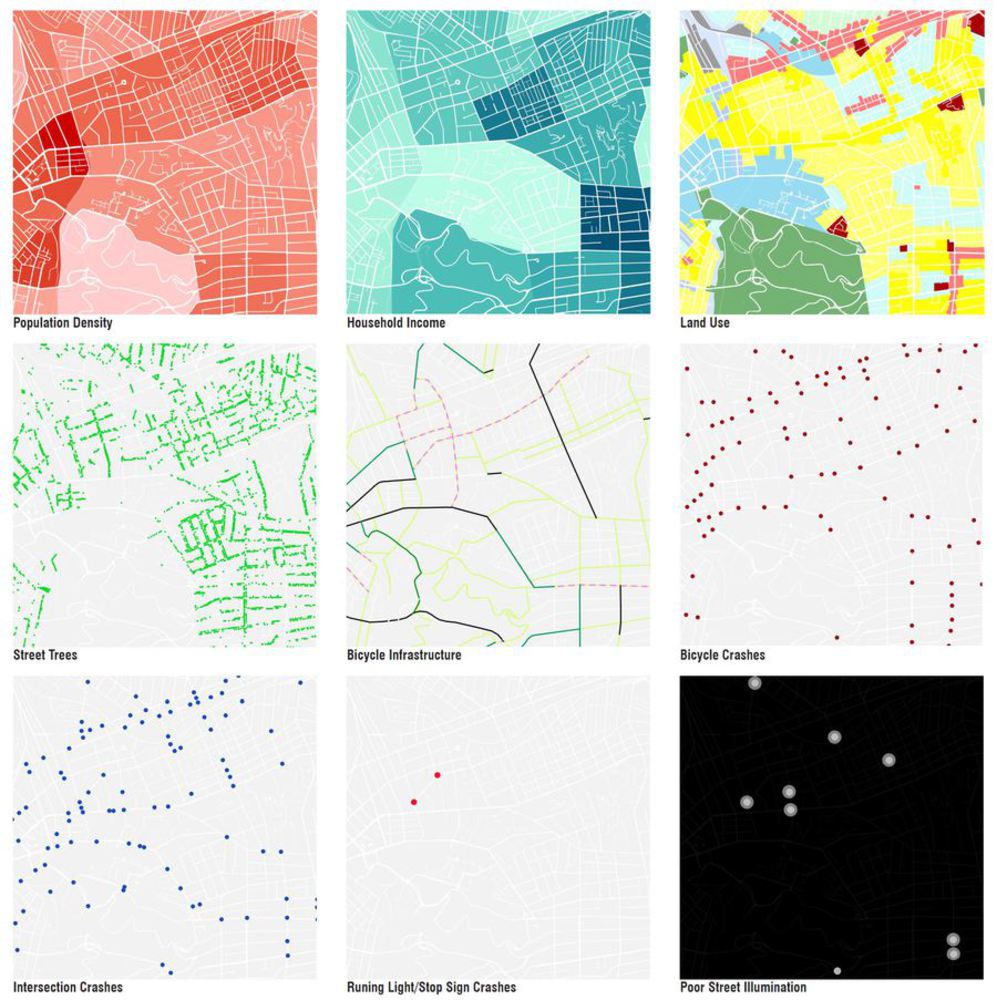 Regarding using SQL to help filtering data, I think coding is definitely a lot of fun, however, it took some time to make things/codes right. I’m more comfortable of using ArcGIS, so the majority of heavy load was done in ArcGIS. However, there are not too many challenges encountered, most of the data processing is very straight forward, just a little time consuming.

Selecting the datasets to reflect correlation of urban environment and other urban data was a little difficult, and how to forming a story line to tell, because cyclists were moving on their routes, it was difficult to interpret their demographic and relationship to cycling route settings. I selected income was to show the possible neighborhood maintenance, such as street pave, signage, landscape visibility (vision triangle of intersections), status, as in the perception, higher income neighborhood would have better public maintenance.

Also, after comparing street with crash locations, it seems better landscape could improve the cycling safety as lower crashes appear on the these better landscaped routes. It might because these trees could lower the traffic speed in the neighborhood compares to Baum and Center.

The majority of crashes happened in cautious routes which was highlighted in black, so the perception could also reflects the route safety.

These comparison could help create a sense of different factor could contribute to bicycle crashes, and how could be improve, such as follows:

1. A large number of intersection crashes in the neighborhood, including total 125 crashes in and around Shadyside and 101 happened at intersections, indicates there should be certain improvement at these intersections, such as bicycle safety boxes or prioritized intersection signalization to help cyclists crossing.

To have a better understanding of cycling environment at Shadyside regarding physical and social characteristics through exploration of a series of urban data.