While digital images have commonly been used as a means of remembering certain things, circumstances may force or implant desire in individuals to forget these memories. People want to emotionally detach from the people, scenes, or messages displayed in images, but it may not be as easy as the click of a "delete" button. While these images end up unseen in a virtual recycling bin, the memory and even the emotional attachment to these memories may still linger. Thus, our group sought a digital technology as an alternative to processing these difficult emotions of grief, anger, etc.

From our initial "sprint" brainstorming sessions, we developed a purely digital concept to help people forget memories. Our concept was a software that slowly distorts an image over the course of time. As the amount of time passes, the pixels on this image will slowly become blurry, brightened, and graphically distorted, to the point where the image is completely indecipherable. The length of time that passes and the distortion expresses how forgetting a memory is not an immediate act, but a lengthy process due to the difficulty of emotionally detaching from images once so loved. As someone sees a growing "loss" of the photo, we hoped the user would also "lose" a part of the emotional suffering connected to that photo.

However, after feedback and discussion, our group believed staying in a purely digital realm with just a software would not be personal enough for a user to actually forget their memory. Would a person truly be able to detach from a memory by just seeing it slowly fade away over a period of time? The act of seeing the photo everyday in fact would actually make us more inclined to remember the memory, even if it were slowly blurring away. Does our group decided to pivot and began to look for ways to incorporate the physical world with a digital realm. 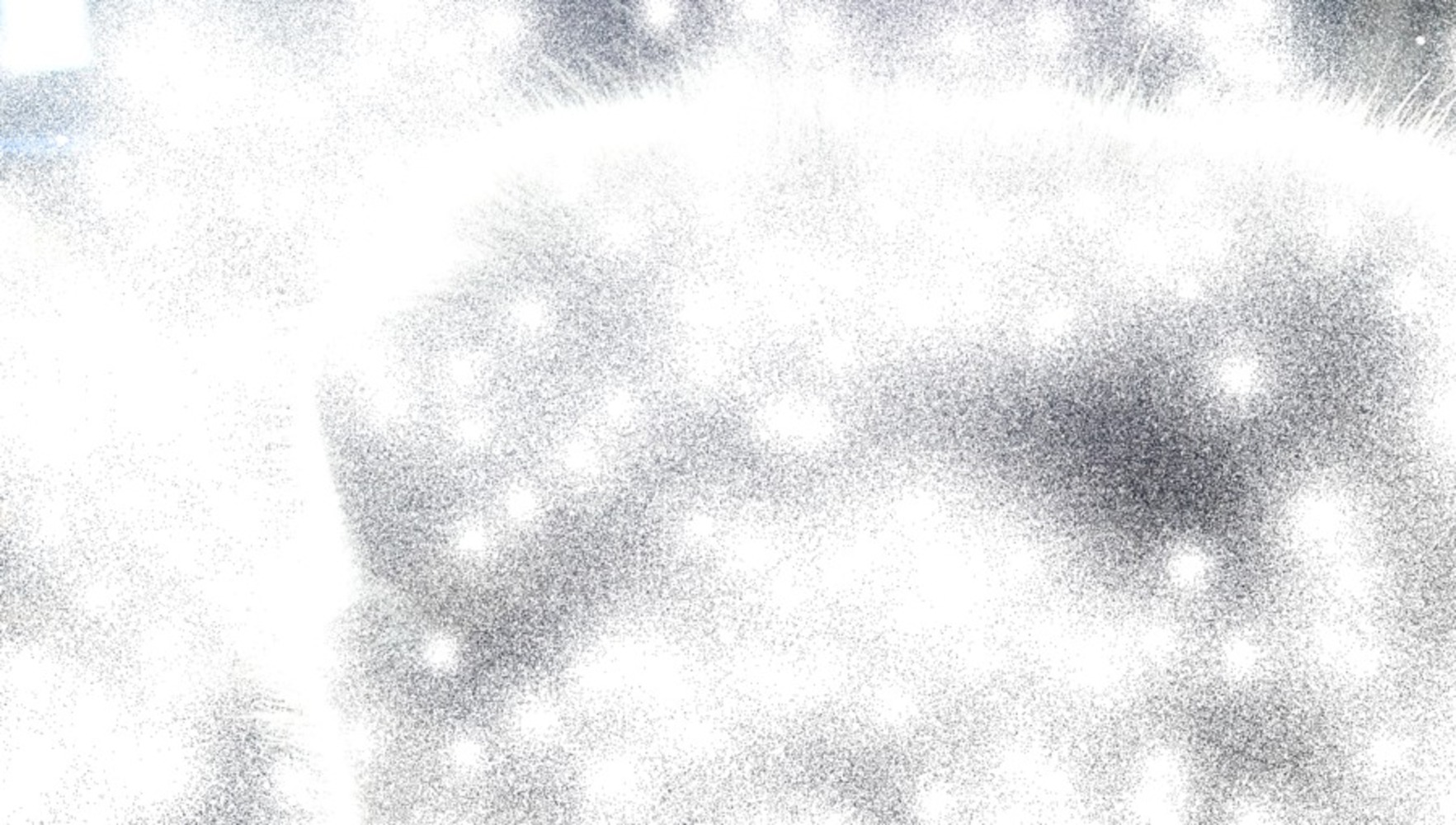 After more brainstorming sessions, we were inspired by one of our class's warmup assignments to "let go",  as outlined in the Sas Paper to developing our next concept. In the Sas paper, in order to forget painful memories of divorce, death, or separation, people performed various rituals, such as melting wedding rings, burying necklaces, or cutting photos.

Similarly, we performed and interviewed people with their experiences of letting go. Interestingly, when we asked people to burn photos of them with their former loved ones to help them forget a breakup, they believed the process was "interesting" and yet unsettling, since there was discomfort from the physical act of burning photos. However, they remarked that burning was a desirable solution, as the actual destruction of the photos would not be done by them, but by the fire.

Thus, this inspired us to create an object that would transform a digital object, like a photo, into a physical object, and then perform a ritual with the physical object to help us forget the original memory. Moreover, considering feedback from those user interviews, we also desired a means to indirectly engage in these physical acts without actually doing the physical act, such as burning or cutting a photo.

Ultimately, we designed a prototype that would convert a digital object like a photo and transform it into a physical object that would aid in the forgetting process.

Users would find a photo they wanted to delete, connect their phone with our prototype so the photo appears on the screen, and then be shown a sequence where the photo is being burned on the screen. As the photo burns, there is a physical act of burning happening "behind the scenes" within our prototype. After the photo finishes digitally burning, a vial filled with ash is released from our prototype, which the user can either dispose or keep.

Our prototype consists of a screen placed within a laser-cut wood structure. The "behind the scene" burning would occur in the bulky portion of our prototype. Additionally, the little space underneath the screen would be where the vial is dropped down and collected. If the user didn't want to keep the vial themselves, then cycling the prototype would send the vial back into an internal storage area.

We named our prototype "Vestige" because of its definition and its relation to the concept of forgetting. Vestige is essentially a remnant of a former object because it "is disappearing or no longer exists." We believed the ash within a vial would be a more personal means to help us forget the experiences represented in the digital images. 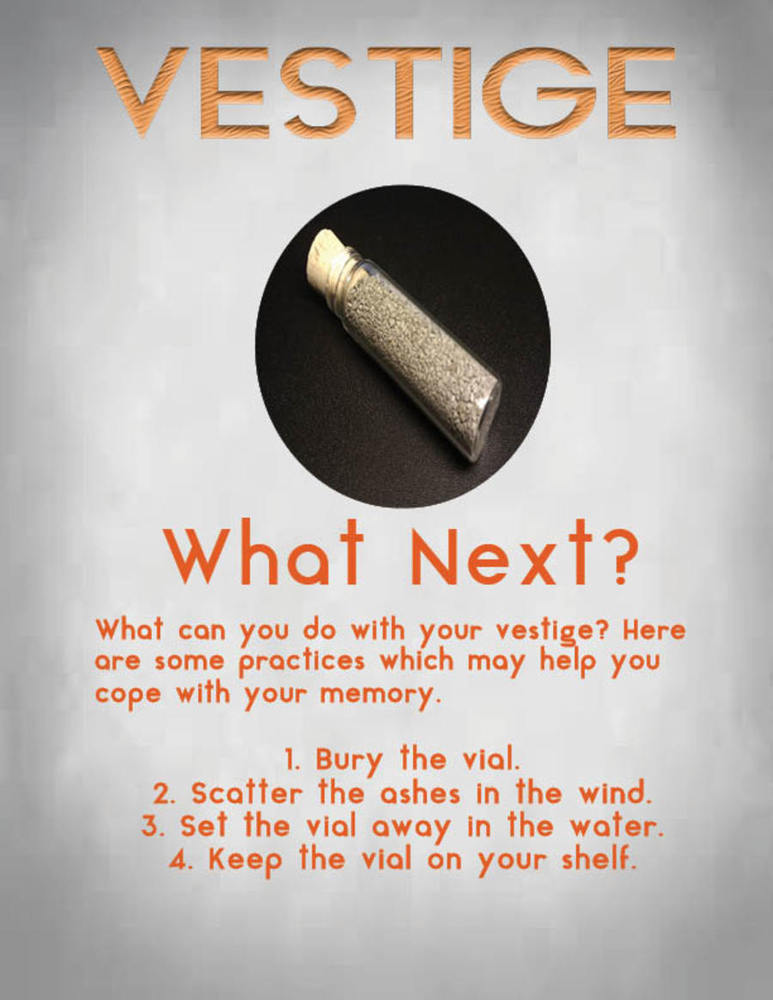 Vestige exists in an interesting space between the user doing the work and letting the machine do the work. In our research, we found that people were more likely to remember an emotional event if they were involved in the process. Vestige does limit user input to choosing what they want to delete, and then requiring an affirmative gesture, in our case swiping the photo towards the kiosk. However, there was a counter-point in that people found it more comforting that they weren't actually the ones destroying the images. By limiting the user's participation, Vestige is not as hostile and is more approachable, as it will do the tough parts for them.

One question we had to consider was "Where does Vestige exist in the real world?" Would it be placed in the public world, or was it something that should exist in the private world on one's desk or home? Ultimately, we decided that Vestige would exist in a public place and act like a kiosk, similarly to photo booths or ATMs in supermarkets. Our group believed that the act of forgetting should be an intentional one which required a physical call to action to go to a public place. By leaving it in a private area like home, the lack of physical action would be akin to the lack of physical action involved in simply deleting a photo on a phone. While the act of doing something as intimate as burning a photo in public appears uncomfortable, that temporary discomfort may be incomparable to the more permanent pain of remembering a painful memory.  Additionally, the device itself has a very specific purpose that's niche enough that it would be hard to justify having one in an individual's home. Plus, the input/output and storage of bottles is more fitting at the scale of a public device, where it can be restocked like a vending machine.

Additionally, we included in our a prompt to introduce the users to Vestige. The purpose of the prompt was to affirm the users that the pain they were experiencing was justified, and comfort them so they could engage in this act of burning a digital photo. We included this because we wanted to prime the users to prepare for such an intimate act of forgetting. This level of intentionality is something photo booths or ATM kiosks lack, and for the purposes of Vestige, we believed this was necessary. Luckily, the proposed system would be easy to use, connecting via Bluetooth and then swiping the items you would want to delete. While some sort of instructions for these would be good to have for a final product, the gist of things can be communicated with a simple message before connecting.

Moreover, with regards to the relation between ash accumulated and the amount of photos deleted, we designed it so the more photos deleted, the greater amount of ash in the vial. If the user had decided to forget many photos, this would help him/her recognize the large amount of emotional baggage that he/she had carried, and hopefully let him/her believe that this amount of physical load was no longer on his/her back.

Finally, at this kiosk, there would be a pamphlet recommending the users what to do with the vial of ash. Similarly to how mental health pamphlets have a list of recommended actions to help cope with problems, this list of recommended practices could facilitate the act of forgetting the painful memory. We listed acts, such as spreading the ashes away in the wind, burying the vial, setting the vial away in the water, or even keeping the vial. Vestige can also store vials internally if users don't want to take them if the memories attached to them are undesirable. In any further iterations of this project, it would be a good idea to inform users about a hotline that they could call if they need someone to talk to. This could be something that the corporate entity behind Vestige could run.

After final critiques, one question to consider was what it meant to surrender this digital photo. Burning a photo is an act with stronger, and possibly more negative emotional connotations, such as anger, rage, or displeasure, as compared to other acts such as burying an object, which is more passive, nostalgic, and "nicer." Is Vestige trying to utilize these emotions to help forget an experience, and if it is, how can we better reframe our burning so we are using more healthy emotions to help us forget?

Additionally, the "behind the scenes" concept of burning had two concerns. It would be wasteful to constantly engage with Vestige, since we would be burning paper and constantly using vials. Is there a means we can sustainability waste a flammable object to use Vestige? Also, the physical act of burning is unseen, but would it be more personal and powerful for the user if this act could be seen?

It could also be helpful to offer to label the vials for users, as they could help differentiate what memories are in what bottles. This leaves the option to have the bottles left unlabeled as an option, as that might resurface memories where an anonymous bottle of ash doesn't link back to the contents as much as it does the event.

From this project, our team learned the importance of not staying too attached to an idea. Early in the process, we did decide to pivot and drastically change the concept of our idea. Additionally, it is important not to consider just our experiences, but the experiences of other people, which we drew heavily on during our user interviews for "forgetting objects."