Made by Tian Zhao

This collage-style digital work reflects a period in human history that we are currently experiencing. That is, the Digital Age.

Note: I moved my proposal to the end of the documentation.

Also, my work consists of two pieces: the first one is an interactive digital remix of icons  and the second one is a traditional collage artwork using icons as materials.

The work is a description of the Digital Age, when information technology becomes popular and greatly influences our life. We cannot live without the Internet, the electronic devices or the countless handy applications on these devices. I intend to use visual media to present the age of explosive information so that people who see my work may stop by and think over the pros and cons of information technology. I also hope that my work can act as a documentation and give people in the future a basic idea of what the Digital Age is like. Furthermore, my work will hopefully become an advertisement of popular applications, so that software companies, mainly start-ups, may pay me for putting the icons of their products in my work.

0
The Digital Age I 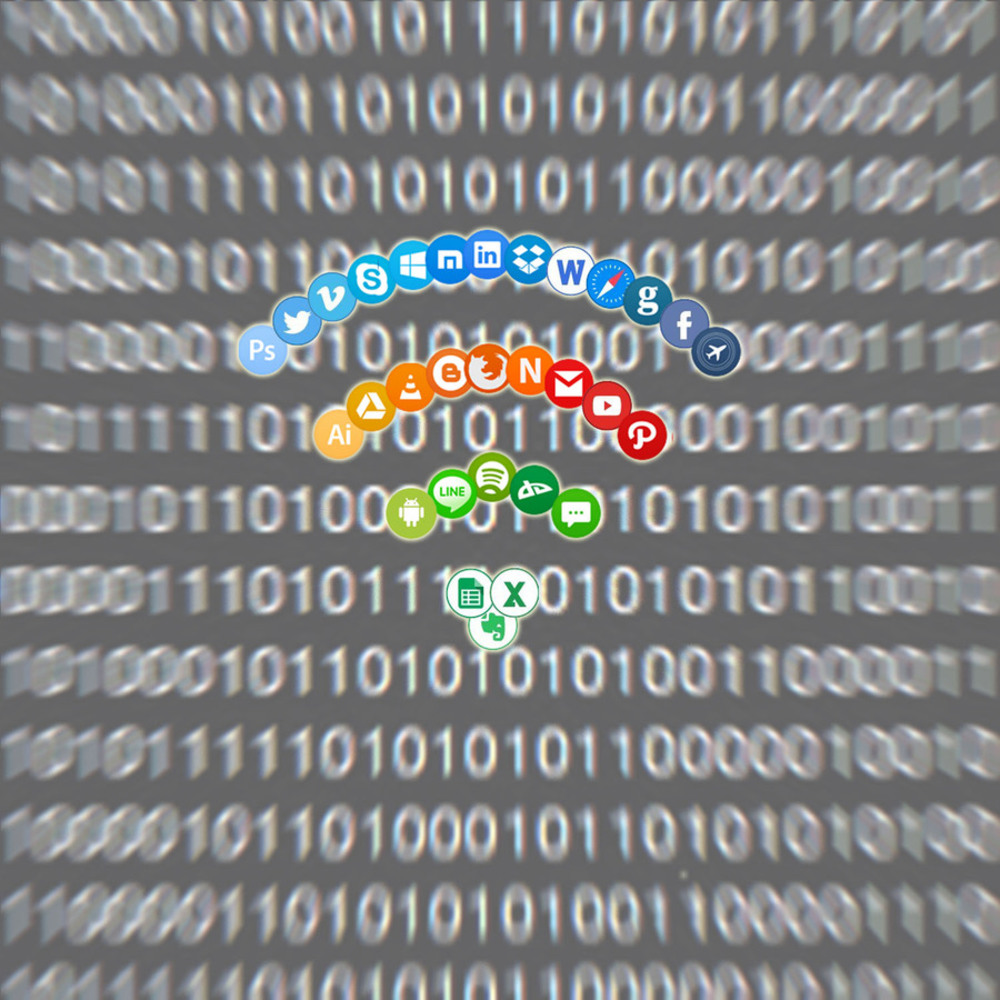 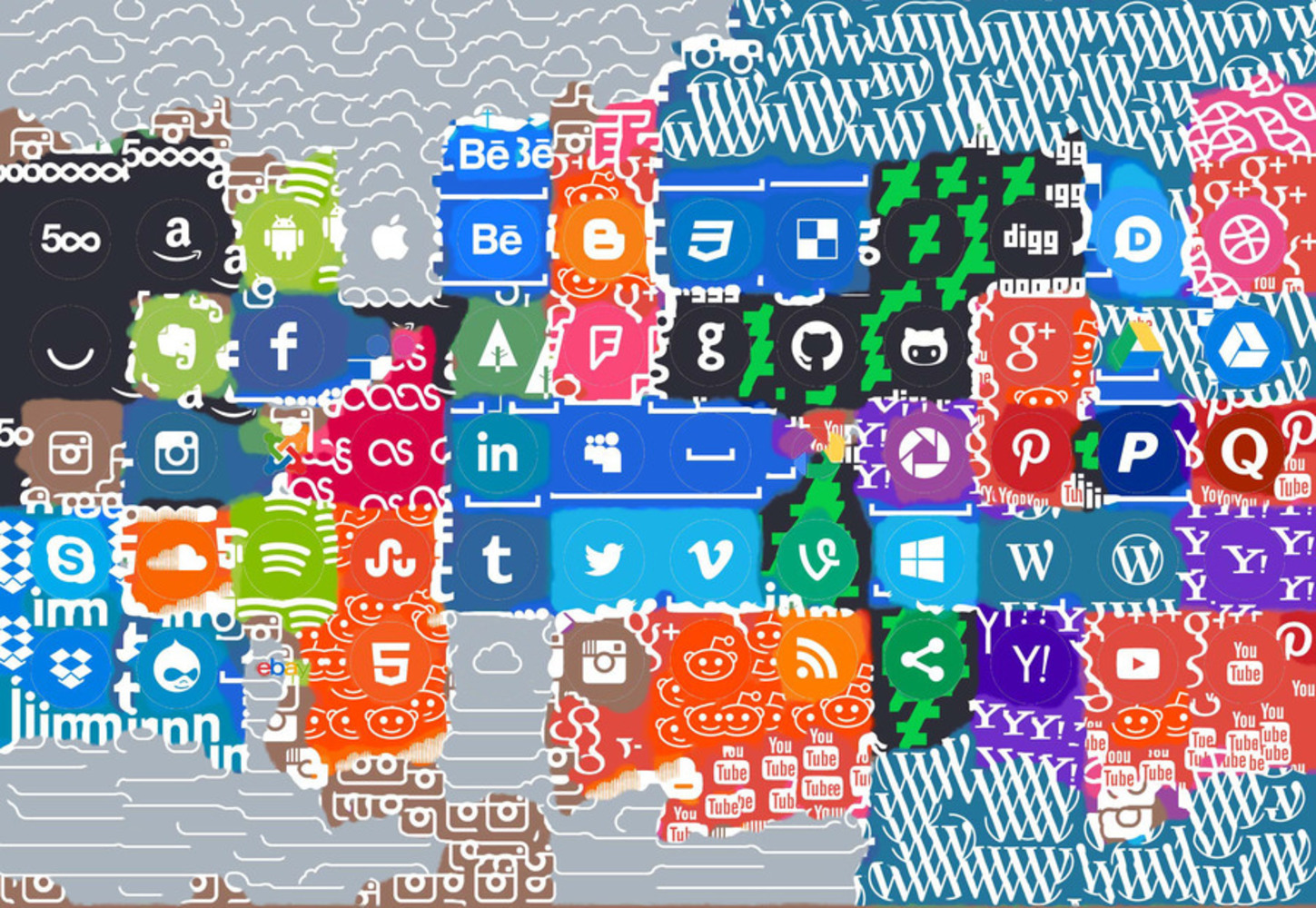 My work is inspired by Georges Braque and Andy Warhol. At the beginning of this module, I researched on Braque’s work, Houses at l’Estaque, and was impressed by how he organized diverging pieces to form a harmonious whole. Therefore, I applied this concept to my work and tried to arrange the icons of applications by their colors to create a harmonious feeling. Besides, I got inspirations from Andy Warhol when I visited the museum named after him. By using the similar icons of existing applications developed by the industry, I intended to incorporate consumerism and commercialism in my work as what Andy Warhol did in his famous work Campbell’s Soup Cans.

At first sight of this assignment, I decided that I would create a work that reflected on the relationship between the information technology and our life, since technology has become the focus and foundation of modern life.

I first planned to create it in a way that remixes the technological elements and the masterpieces of Pop Art. However, when I played with the Pop Art works in Photoshop, I suddenly realized that their contents, mainly about the pop culture of the 20th century, really had nothing to do with technology, and that forcing them together would result in an unnatural product. I then decided to learn from the form of Pop Art but abandon most of its contents when producing my own work. Therefore, my work utilizes the icons of existing applications as ready-mades and adopts a collage style which is sometimes seen in Pop Art, but maintains its unique theme and contents, information technology.

My work, The Digital Age, is a digital remix of technological elements in a collage style. The large symbol of Wi-Fi consists of 30 different icons of popular applications that people frequently encounter in their daily life. I used Photoshop to organize these icons and arranged them in a gradient color scheme.

I created the background by randomly typing 0’s and 1’s in a text editor and converting the text to an image, since all information in the Digital Age is presented in the binary form. I also used the Radical blur in Photoshop to create some special effect on the background, so that the audience would feel as if they were pulling to the “Wi-Fi”, and might feel slightly dizzy as if they were faced with explosive information.

My inner critic applauds me for successfully showing the audience my theme and using digital media to strengthen the visual effects. However, it also criticizes me for “not being involved enough”. I simply described what the Digital Age was like and what people were concerned about (Wi-Fi and handy apps in this case), but did not show a strong feeling of my own. I am more like an observer than a producer of an artwork. I personally love to approach art in an objective way, which I cannot tell is a good habit or not yet. But it does prevent me from directly showing my own voice in my work. I hope that I could incorporate more subjective feelings and get more involved in the work.

From this project, I learned that “stealing” other people’s ideas, styles or contents can be a justified and even encouraged action, as long as I made good use of them. By creating my work after Andy Warhol, I gained a deeper understanding of consumerism and commercialism, and first time in life I actually tried to make some money from art, which compelled me to take a quite different approach to the topic from I usually did.

As is mentioned in the “Critique”, I hope I can get more involved and incorporate more of my own feelings into the work. For example, I may create a scene where people are being pulled into the “Wi-Fi” black hole to voice against over reliance on technology.

Theme: My project will focus on the popularity of information technology and electronic devices, and how they converge with and diverge from modern art.

Meaning: People nowadays cannot live without cell phones, computers and internet. The popularity of information technology has become a great phenomenon in the 21st century. I want to record this phenomenon, and show the audience how our everyday life can relate to those artworks which seem to be remote from us.

Inspiration: I was inspired by Marcel Duchamp’s work L.H.O.O.Q. (see below), which first brought up the theme of gender reversal. I probably will borrow some modern artworks as Duchamp did in this work, but my theme would be technology instead of gender reversal.

Approach: I will present to the audience the rapid development of technologies through the “readymade.” In other words, I will mainly create my project by revising or assisting some of the modern artworks and endow them with the concept of “technology.” I come up with several possible ways to do this.

First, I may remix some modern artworks with technological elements nowadays such as Internet, phones and machine language. I may use software such as Photoshop to produce my remix by directly adding elements to the original artwork.

Second, I may photograph scenes in daily life those resemble certain modern artworks yet still contain elements of information technology. For example, I would probably take a photo of the screen of a shut down computer and name it “Black Square.”

Form: My project will in the form of a collection of photos and pictures, and each of them will be a remix of modern artwork and technologies. 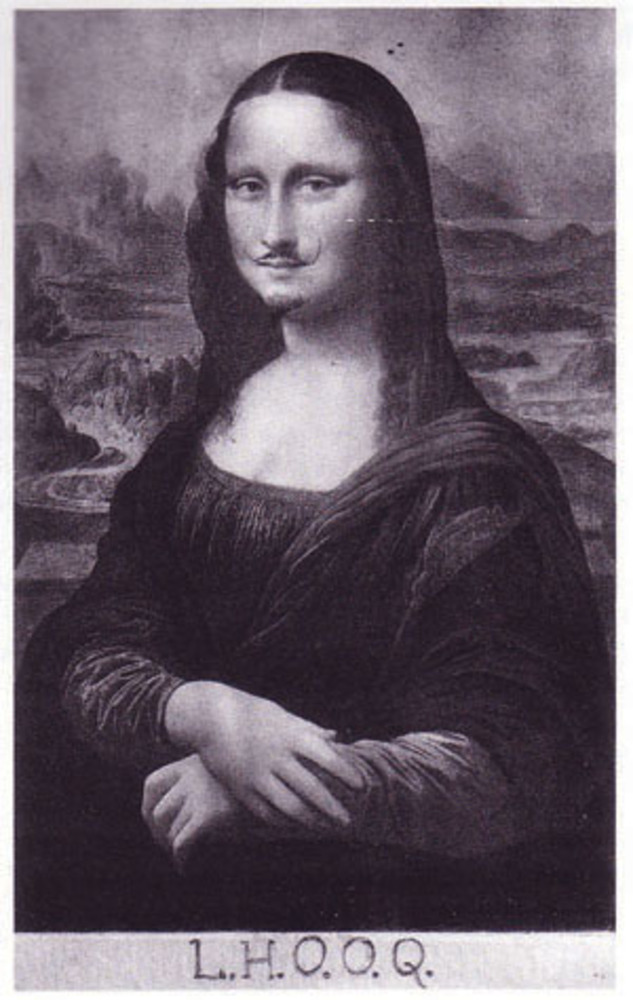 I love your creativity! The idea of grouping logos by their colors gives a smooth color scale. The blurring effect of binary digits also creates an astounding effect.
I think overall the execution is great. However, the transition between the logos and background could use more refinement.
The documentation is pretty clear.

This collage-style digital work reflects a period in human history that we are currently experiencing. That is, the Digital Age.