The Mirror in the Vase and Composition Concret

My thoughts and reflections after spending some time with Edmond Aman-Jean's The Mirror in the Vase, and Stuart Davis's Composition Concrete. 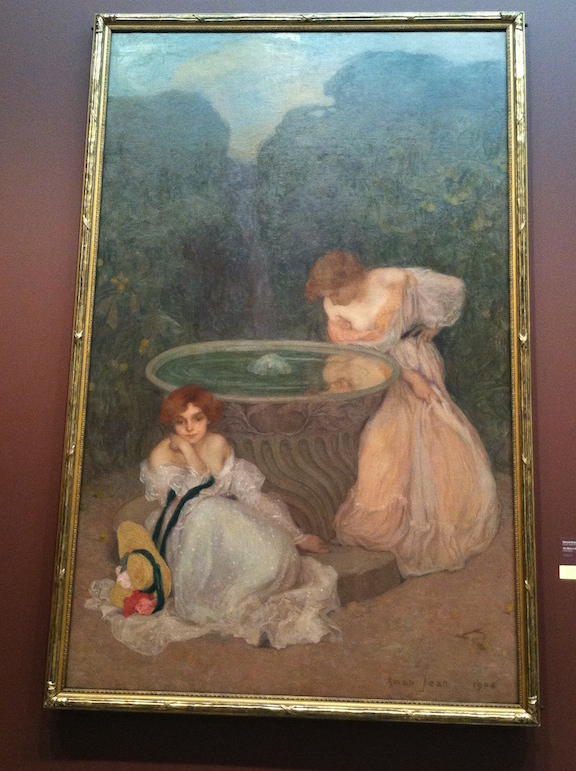 When I was looking for a realistic painting, I chose The Mirror and the Vase because I felt that it presented a fairly straight-forward (and realistic) image. The scene of two women in some sort of garden by a fountain/reflecting pool is fairly tranquil and easily recognizable. As I sat for a while, I started to feel that there was a lot more to the painting. Since about half of the painting consisted of dark green bushes (and a small amount of sky) I focused mostly on the figures in the lower part of the painting. Specifically, my eyes traveled in a triangle from the right lady’s head to the sitting lady’s head, down her leg to a patch of dirt/leaves in the bottom right of the picture, and back up to the first lady’s head. It seemed that the picture was specifically arranged that way so that we are more drawn in to the scene. As an experiment I actually held up my notebook over the upper half of the piece at one point, and without the excess negative space, I found myself not as drawn into the picture.

Since I was focusing on this part of the picture, I thought a lot about the different types of reflections. The lady in peach is absorbed in her physical reflection, or perhaps what she sees around her. The lady in white is staring off into the distance reflecting on her thoughts or her internal feelings. I felt that the hedges they are surrounded by created a moody and concealed feeling and the soft and dreamy feeling of the picture adds a sense of tranquility. This made me think it was about something private and personal, such as personal reflection. By the end, I was mostly interested in the lady in white. I think as the lightest part of the picture my eye was naturally drawn to her. In the end, I reached a conclusion that the picture was about learning to focus on your own personal reflections of yourself, and not what other people see. 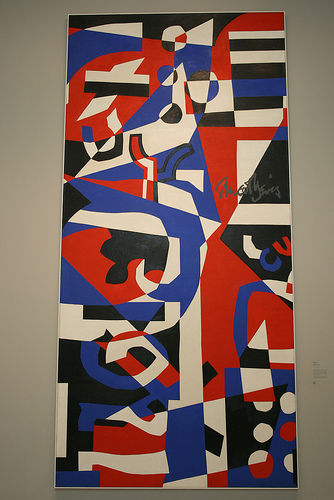 I mostly decided to look at this piece because it had a bench in front of it. I also found it interesting in the beginning that only 53 years separated this and the last one I looked at. In the beginning, I was simply overwhelmed by the scale of the piece. The picture doesn’t show it, but this thing is really big. Since I couldn’t find a main point to focus on, my eyes got very tired as they attempted to follow lines a crossed the painting. I wasn’t able to discern any sort of foreground or background, and the colors seemed to overlap and transition without any sort of order. As a way to kind of clear my head I ended up looking at the pattern of the wood under the paint, because I felt I needed some sort of semblance of something recognizable. After reading the description multiple times, I eventually found and figured out the “1957” in the bottom left of the painting. I still didn’t completely understand what was going on though, and overall I just sat there trying to figure out what I was trying to think about. While I liked it, as something to see in a museum, I feel that I couldn’t handle it in my daily life because I would keep trying to derive some sort of meaning out of it. I ended up making up stories based on random shapes in the picture, just as a way of fitting it into my perception of what I thought I should see in a picture. Maybe that is the point of these kinds of pieces, to cause us to question our perception of art, and in a broader sense, the definitions of certain things that are so ingrained in our lives that we don’t realize how strongly we followed them until something challenges that assumption.

Overall, while I felt more comfortable looking at The Mirror in the Vase, I think that is because my expectations going into the experience. I think I reached a conclusion based on the guidance I was given by the artist, and I was relaxed during that journey because the subject matter was something I related with and felt connected with my life. On the other hand, I felt Composition Concrete was much more open ended. The artist didn't really want to lead the viewer down his path, so instead composed a piece that allowed observers to reach their own conclusions with much less guidance.  While this sounds kinda cool when I say it that way, as a viewer I felt very vulnerable, lost and a little uncomfortable.  The thirty minutes definitely felt a lot longer, and I was ready to walk away at the end, but I think the thoughts that I had might have been a little less restrained. Instead of trying to understand what the artist wanted me to think, I spent more time thinking about what I wanted to think, which was a different sort of experience.

My thoughts and reflections after spending some time with Edmond Aman-Jean's The Mirror in the Vase, and Stuart Davis's Composition Concrete.