Made by Sebastian Guerrero Cardenas

A clock that will hopefully motivate you, to leave and do cool things.

I find myself and maybe others, that because of time, I might not do some activities or hobbies. So I decided to take my skills and try to make my own motivational clock. This is in hope to make me, and maybe others, get out of what they are doing and do the action ty that they had to look at the clock for.

In order to get toa finished clock, I did a lot of image searches on different types o wall clocks. I did more to see what can be done on a clock face, but I did not limit my research to motivational clocks. I looked at even watch clocks to see what I could do.

The main clocks that motivated me were one particular that was just covered in the text, and only the words that described the time were lit. This along with other very square rectangles where what I liked and influenced deeply with my final design.

Before beginning to start my clock, I did a lot of sketch regarding possible ideas for clocks. All of these revolved around the idea of attracting attention and hopefully motivating. Some ideas included making the clock into a stop sign like a symbol, where the hands where the little characters hands.

After several ideas and iterations, I finally came across an idea that I liked and decided to pursue. which was to create a clock with a repeating pattern "NO EXCUSES", and with a cut out of the words "NOW". This decision was made because I think it best fits the aesthetics of a modern clock, and it conveys the message of motivation the loudest.

After creating the sketches, creating the Fusion 360 model took a long time. Reason being that even though my design was not all that complex, the complexity of the repeating no excuses patter was too much to handle for Fusion 360. After multiple attempts, from using the text built into fusion, and even creating my own word vectors in order to simplify the design. The design was too complex. Creating multiple words and then moving them around in a simple place would take over 4 minutes to complete. This really hindered my ability to work, so I had to resort to illustrator. In illustrator, I was able to create my outline and export to a usable format. Once I had all my DXF files I had to use the laser cutter.

1. Score the NO EXCUSES patter first

2. Etch the patter of no excuses

3. Cut out the word not, from inside to outwards

4. Cut out the reminding border and circles for hanging

5. Cut out back piece

This whole process took over 2 hours.

0
The text on the fusion 360 rendering 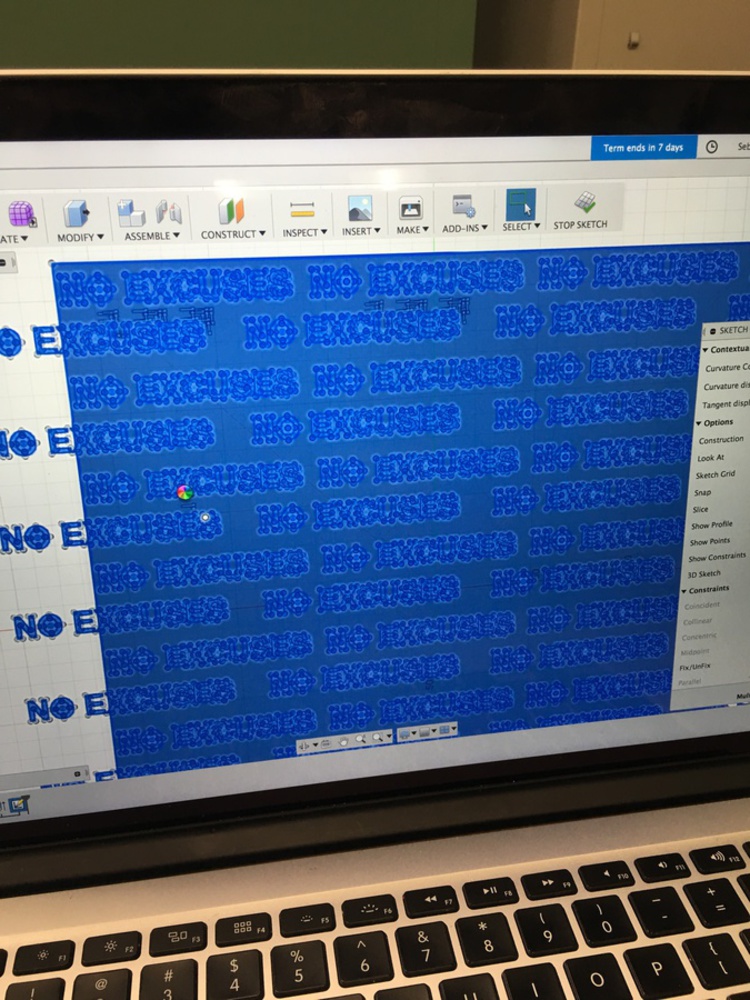 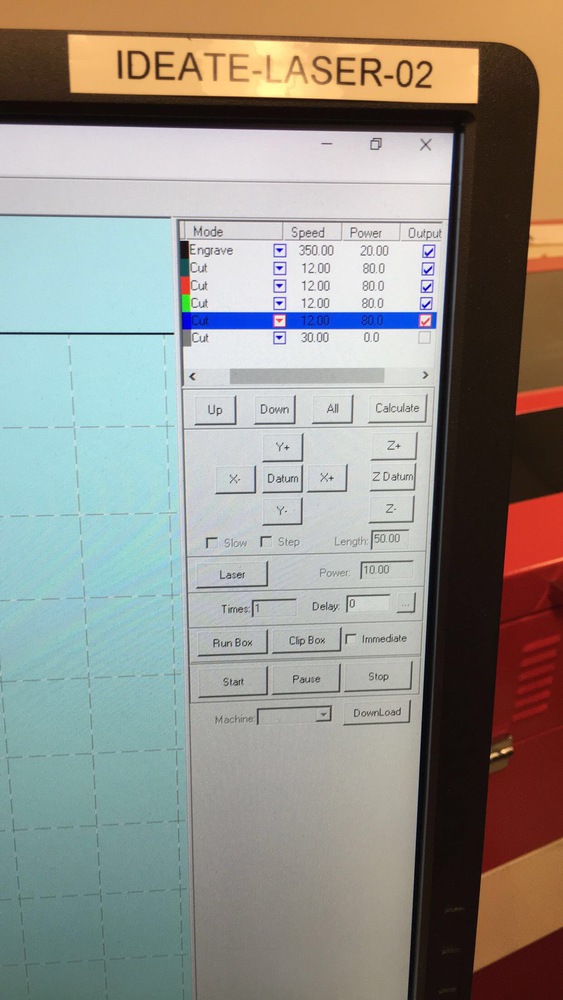 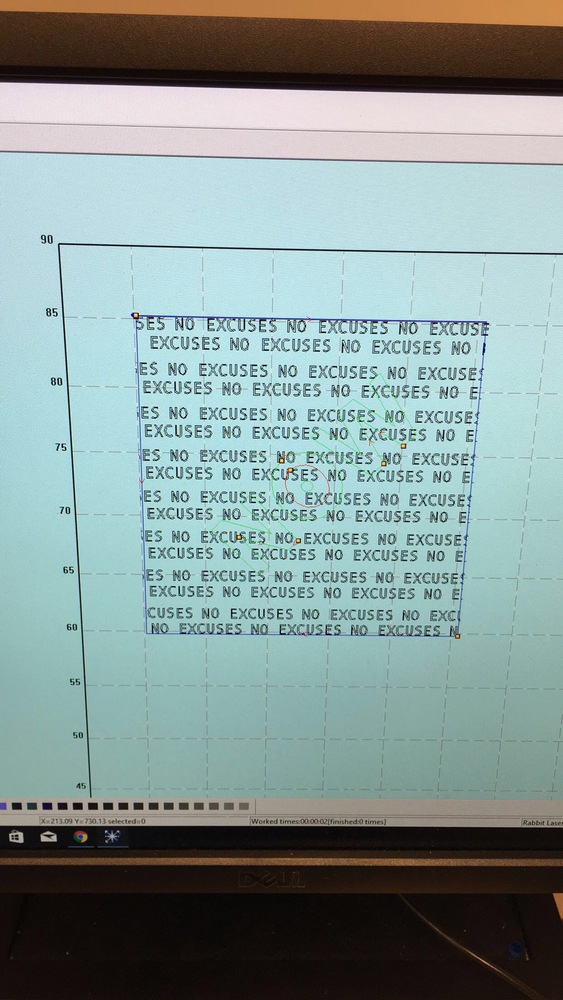 Detail what you created. What methods or techniques did you use? What tools and technologies were involved? Include images, code or video.

The final product in a two-layer 3 mm wood clock. where the outer layer acts as a holder and the outermost layer acts as the piece of display. The display piece has a repeating pattern of words, that is both etched and scored. In addition, a large word,"NOW," is cut out to emphasize the time. This clock is made to hopefully motivate others to do what they cant at the moment, and realize that the can only do it at this time.

This project taught me a lot about the limitations to some cloud software. After struggling a lot with the repeating pattern, I realized that some software is better for others, but I still appreciated the flexibility an robustness of Fusion 360. Lastly, I feel like I developed a strong understanding of how to use the LaserCutter and its software. After spending an intimate 4 hours with the machine, I think I can approach any problem with it, but there is still a lot to learn.

For the most part, this project was mostly independent when it came to designing. But when it came to actually Building it my teacher Larson, and many others in the IDEATE lab helped me make this come to life, and I could not have done it without them 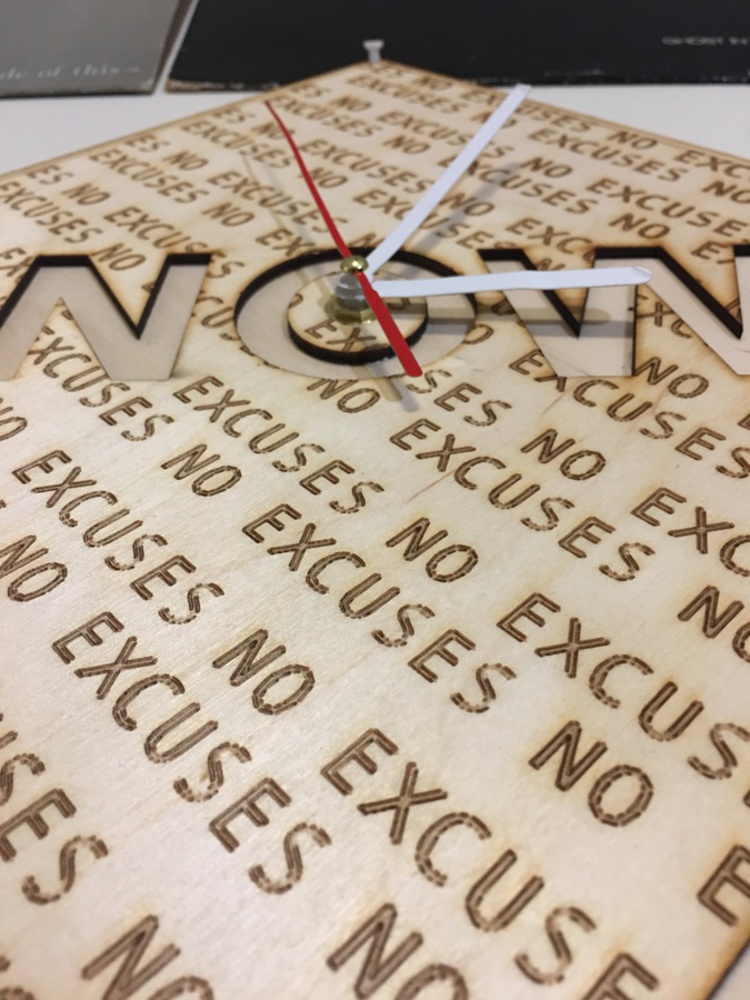 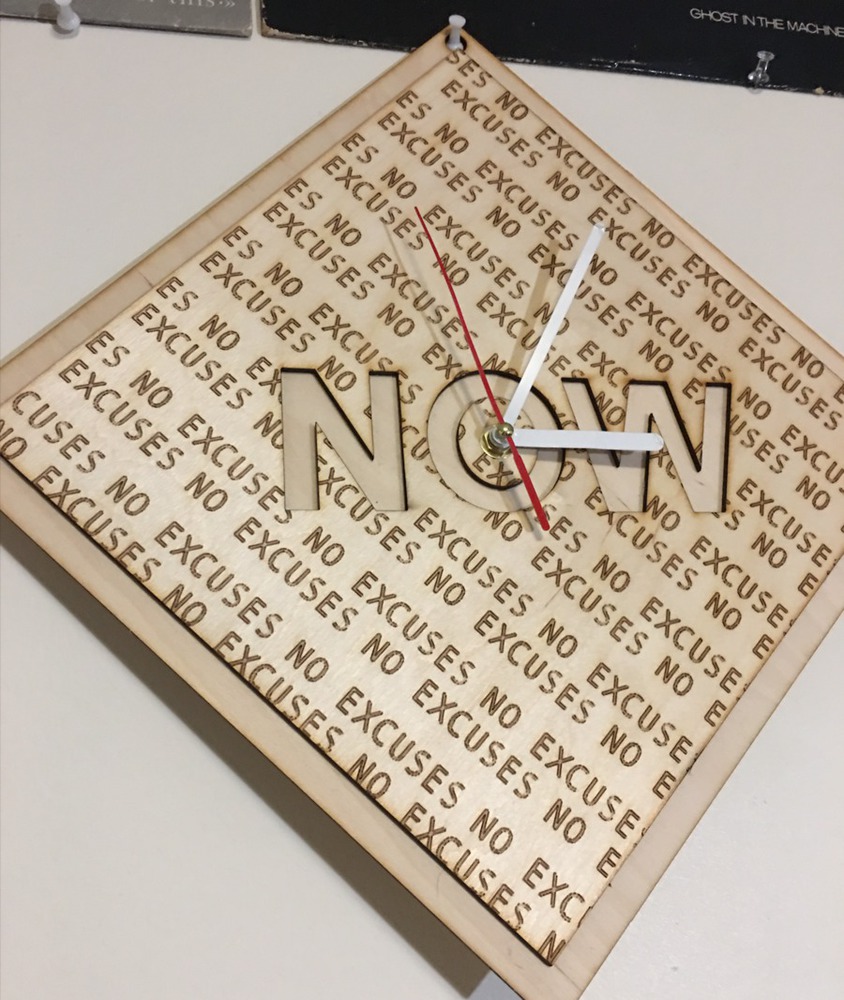 A clock that will hopefully motivate you, to leave and do cool things.