For my final project, I chose to make a visual composition based on the song "Married Life" from Pixar's Up. I chose this song because it is somehow both uplifting and calming at the same time, and I wanted my composition to reflect those two emotions. The song is light and happy, but is punctuated by some quiet, pensive points in the middle (1:13 and 3:15). It uses playful, staccatic instruments (like clarinets and violins) at some points and smoother, softer instruments at other points (like a piano). Hence, I wanted my composition to be hopeful and uplifting, while also being self-reflective.

I found myself particularly influenced by Wassily Kandinsky's painting, "Several Circles." I loved that circles give off a softer, warmer feeling than any other shape, especially when they are slightly transparent or have a softer edge. In Kandinsky's painting, he overlays circles to create a sense of fluidity in the piece. I wanted to use the same technique to give off a sense of upward movement, which is why I decided to use circles to direct the viewer's eye.

Kandinsky also discusses the role of points in his book Points and Line to Plane. He says that "as the sizes...of the point change, the relative sound of the abstract point likewise is altered." After some consideration, I've concluded that the smallest points create a short staccato sound that is firm and unyielding. In Kandinsky's words, a small point is the "briefest, constant, innermost assertion" that "digs itself into the plane." Large points, on the other hand, are warmer than their smallest counterparts. They create movement because they are not as deeply rooted on the plane as small points. Perhaps this is how Kandinsky creates so much movement in "Several Circles."

I will discuss how I used this research in another section. 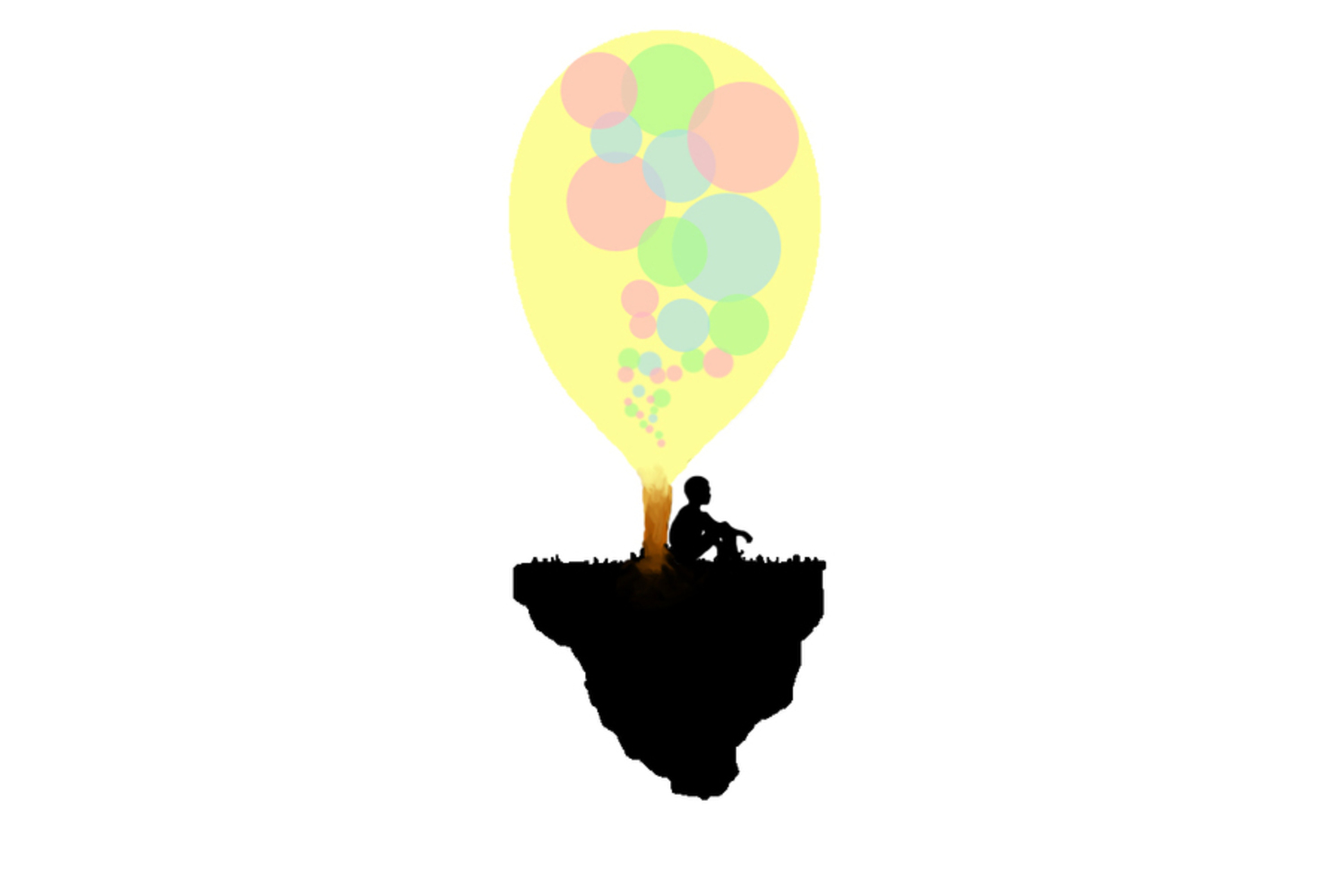 "Up" was created by the artist, Ariel Tian, as a reflection of the song "Married Life," featured in Pixar's movie Up. This piece takes inspiration from Wassily Kandinsky's painting "Several Circles" and his book Point and Line to Plane, and uses his influence to create a feeling of both uplifting and humble self-reflection.

The piece experiments with circles to draw the viewer's eye upwards, thus simulating an "uplifting" sensation. The vertical orientation of the piece as well as the shapes of the boy and balloon aid in directing a vertical path from the boy to the balloon and beyond. Thus, the piece is continuously being pulled upward as if by a string attached from the boy to an invisible sky. At the same time, the viewer recognizes that this upward path originates from the boy himself, and is rooted in him. This invokes the realization that happiness comes from within, and can be born from even the slightest inkling of hope.

This piece literally and symbolically defies gravity; as the boy and the island hover above ground, the viewer experiences a sense of elevated hope, a sense that things are looking up.

By naming this piece "Up," I had committed myself to the task of drawing the viewer's eye upward. That was my first goal, as it was essential to creating an uplifting feeling. I had noticed that Kandinsky's circles did a fantastic job of stimulating continuous movement of the eye, and so I incorporated circles into my composition as well. I wanted the circles to carve a path from a subject upward to the sky (an invisible one, to signify boundlessness). With that in mind, I began experimenting with different circles.

To do so, I had to first ask myself, where is the fine line between a point and a circle? Is there even a difference between a large point and a small circle? According to Kandinsky, the size of the point is pertinent in deciding what kind of sound it resonates. The smaller points are grounded in the page, and induce very little movement. Thus, I decided to use smaller points in my subject, to represent the idea that hope, even the tiniest bit of it, is rooted within him. As I move away from my subject, however, the circles grow bigger and bigger to create more movement. I also decreased the transparency in the circles farther away from the subject, signifying that this hope grows stronger as it builds upward momentum.

I also considered the idea of gravity in my composition. As stated in the curatorial statement, my piece defies gravity in more than one way, which makes the title of the piece very fitting. I think this shows overall success in making the viewer feel uplifted when they see this piece.

From the feedback I received, I realized that I had to rethink the following three things:

1. The color of the tree/bubble

2. The dimensions of the canvas

Many people agreed with my choice of color for the tree, but did not like how it blended with the black silhouette. Eventually, I decided to make everything except the circles completely black, which helps focus the attention on the circles. I also changed the tree to a balloon, as one person noted that it was hard to recognize it as a tree.

Daragh suggested that I change the dimensions of the canvas to make the composition more vertical oriented, which I think helped a lot in creating upward movement.

Finally, I decided to get rid of the original boy. I got some feedback that he seemed to resemble the Dreamworks logo a bit too much, which is not good because I do not want external connotations to change how the viewer sees this piece. I also decided that I wanted the boy to be standing, so that he is vertically oriented just like the canvas itself. In addition, I made the circles start within him. This change was extremely important, as it both connected the boy to the upward movement of the circles and gave the composition a sense of hope coming from within, which is a great interpretation of the original song.

When I first look at this piece, I literally feel like I am being pulled up. I even sit a little taller in my chair. My eyes immediately focus on the brighter circles in the balloon, then traces them back to their source within the boy, before finally following the path of circles upward. I feel like I am floating, partially because the boy is also floating and partially because my eyes are tracing this fluid path of circles that seems to be the force pulling the boy upwards. I feel like I am the force holding the boy up.

And at the same time, I feel hopeful. The pastel green, pink, and blue seem shadowed by the black of the balloon, but are released to their full potential just as they escape from the balloon. I can see that what started as a small idea, a mere smudge of blue inside this boy, has grown into something beautiful, bright, and promising. And it is this beautiful, bright, and promising thing that is driving the boy upwards. I can feel that hope is the driving force in this piece.

I think this piece was a success. While the first draft was relatively flat and its colors were too distracting, this final draft is tall and sings a much more harmonious song. I look at it and I feel peacefully hopeful, the same way that I feel when I listen to the song that inspired this all.

Before this semester, I would have responded to this composition in a similar way. I think that is a key idea in all compositions: they should be understood by everyone, even those with no artistic background. However, before this semester I would not have been able to create this composition. I have never even considered enjoying abstract art, never mind making it, and so to incorporate some more abstract elements into my composition (even something as simple as circles) says a lot to me. As much as I have rolled my eyes at some abstract art, I now realize their importance in the development of one's visual literacy. I am extremely thankful to have had this experience because even though I may never need to work with abstract art ever again, I can respect the importance of being exposed to abstract art.

The transition from your preliminary outcome to the final piece is great; you definitely took into account the feedback you received both on the gallery and in class. Making the image larger vertically, creating almost a path of bubbles upward, and switching to a taller silhouette really add to the feeling of upward movement and hope. It also is interesting how you changed the tree to a balloon, and made it black instead, so that most of a viewer's attention is drawn to the circles. Finally, I love how you started the circles in the boy; like they are bubbling up from inside him to pull him and his little island upward. Great work!