Made by Anna Tan, Christina Reimond and Talia Lesjack-Randall 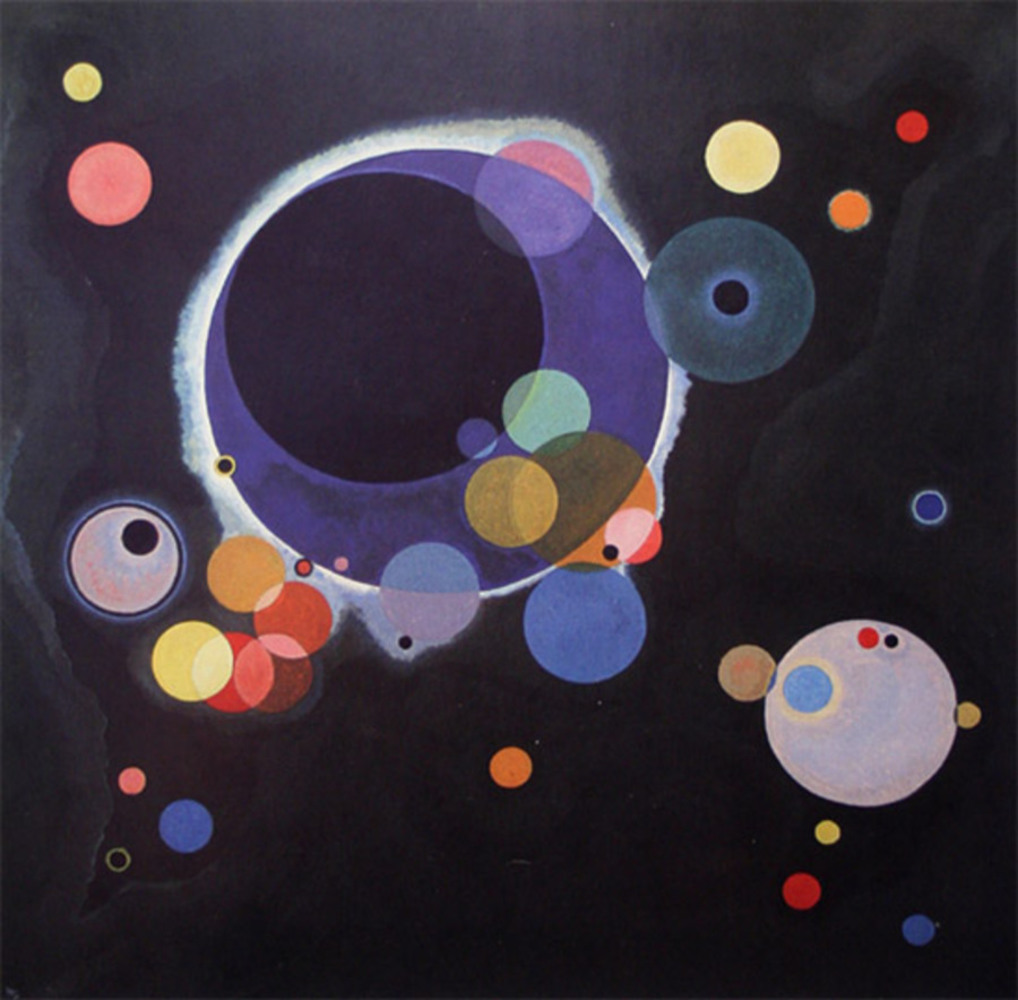 "The circle, which I have so often painted recently, can sometimes be described as nothing other than romantic. The coming romanticism is truly profound--beautiful, meaningful, joyful. It is a block of ice with a burning flame inside. If people feel only the ice and not the flame, that is just too bad." - Wassily Kandinsky

The circle was Kandinsky's favorite geometric shape, and was presented in a beautiful way in his work Several Circles.

This painting initially caught my attention because of the brightness emanating from it, despite the dark background.  This light gives it depth and pulls a viewer into its world-- this world which first appeared to me to be space and planets and movement within the galaxy.

We see a large circle, positioned a bit off center to the top left, and a glowing aura surrounding it.  On top of this circle and around it, there are several other circles of varying colors and shades that all seem to fit together, despite being very different.  Each time circles overlap, this produces a different color, usually a combination of the two or three overlapping.  This gives a three dimensional effect; some circles are in the background, and some are in the front.  Also, we notice that all of the smaller circles seem to be pulled to larger ones, which in turn are pulled to the largest one.  This is probably an effect of the bright aura surrounding it, which adds weight to this part of the work, and also because of how our attention is initially drawn to larger circles, then to the small ones which we see are crowding around them.  We also see a faint gray-ish cloud in the bottom left and top right corners.  The shade of gray chosen for this gives the impression of the light from the aura near the center reflecting off of a mist which surrounds the circles, and keeps them all together.  This also gives the effect of a closed system in which the circles are drawn toward each other.  In these ways, Kandinsky has simulated both depth and movement, influencing our perception just by using simple techniques such as shape and color.

See this link for the quote, and this one for the image. 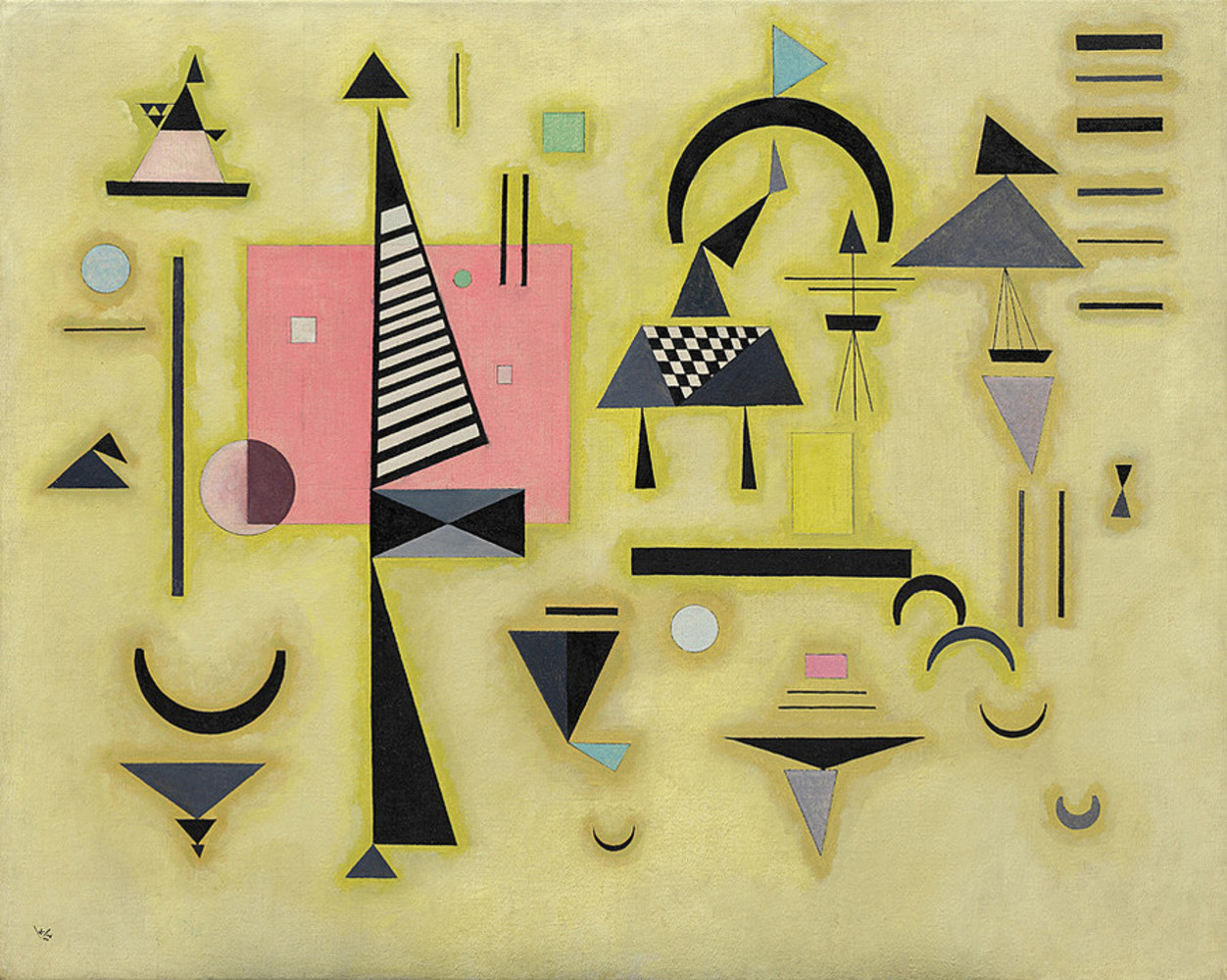 In Kandinsky's work Decisive Pink (1932), his extensive use of simple geometric shapes and colors in the Bauhaus period of his artistic career is displayed fully. Like many of his other works during this period, he composes with circles, half-circles, triangles, rectangles, straight lines and curves. He also used very simple patterns and colors in each shape. The soft colors, in contrast with the large amount of black and white, "calm" the composition. All the shapes appear to be on the same plane due to a lack of overlapping except for the pink rectangle in the middle left; the very withdraw of dimension moves the eyes towards the "decisive pink" region. The pink square, the most significant feature of the composition both due to its color and size, is placed behind the triangle and other shapes, hiding yet stating its presence. The upward triangles give the composition a direction towards the top, which in turn gives off energy. The combinations of shapes to form balance also stabilize the composition despite the scattering of the shapes. 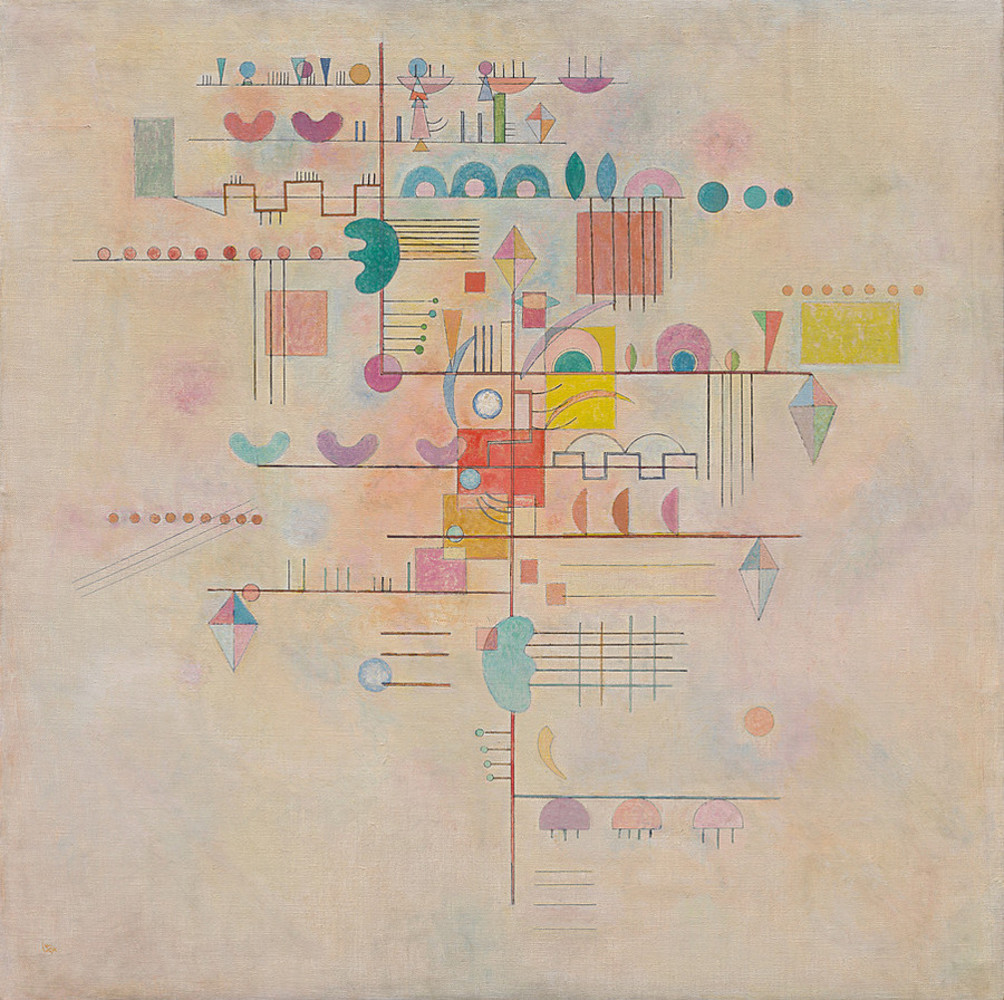 HHere again we see Kandinsky working with simple shapes, though of the three pieces we chose this is definitely the most complex as far as objects used. The two most important shapes here are the vertical lines, as they set the stage for the feeling of assent that the panting, "Graceful Assent", is named after. The entire piece has a feeling of moving upwards, almost like the most abstractly drawn 2D scrolling game. There are a few key things that add to this effect. One is that the density of objects increases as you approach the top, making it feel as though they are all working their way up there. Another is that the vast majority of objects are placed on top of the horizontal lines, attributing to them a platform like quality and orienting us to see that top is 'correct' in the physics of this world. In fact, the only shapes underneath are either diamond shapes that appear to be arrows pointing upwards and sets of a few thin vertical lines which also ad to the directionality and overall sense of motion.