Made by Sienna Stritter

This project critically examines 200 Facebook profile pictures and analyzes how people present themselves through these images.

What's in a profile picture? Apparently, a lot more than just a photo of yourself.

A profile picture tells a story about what is important to the user. 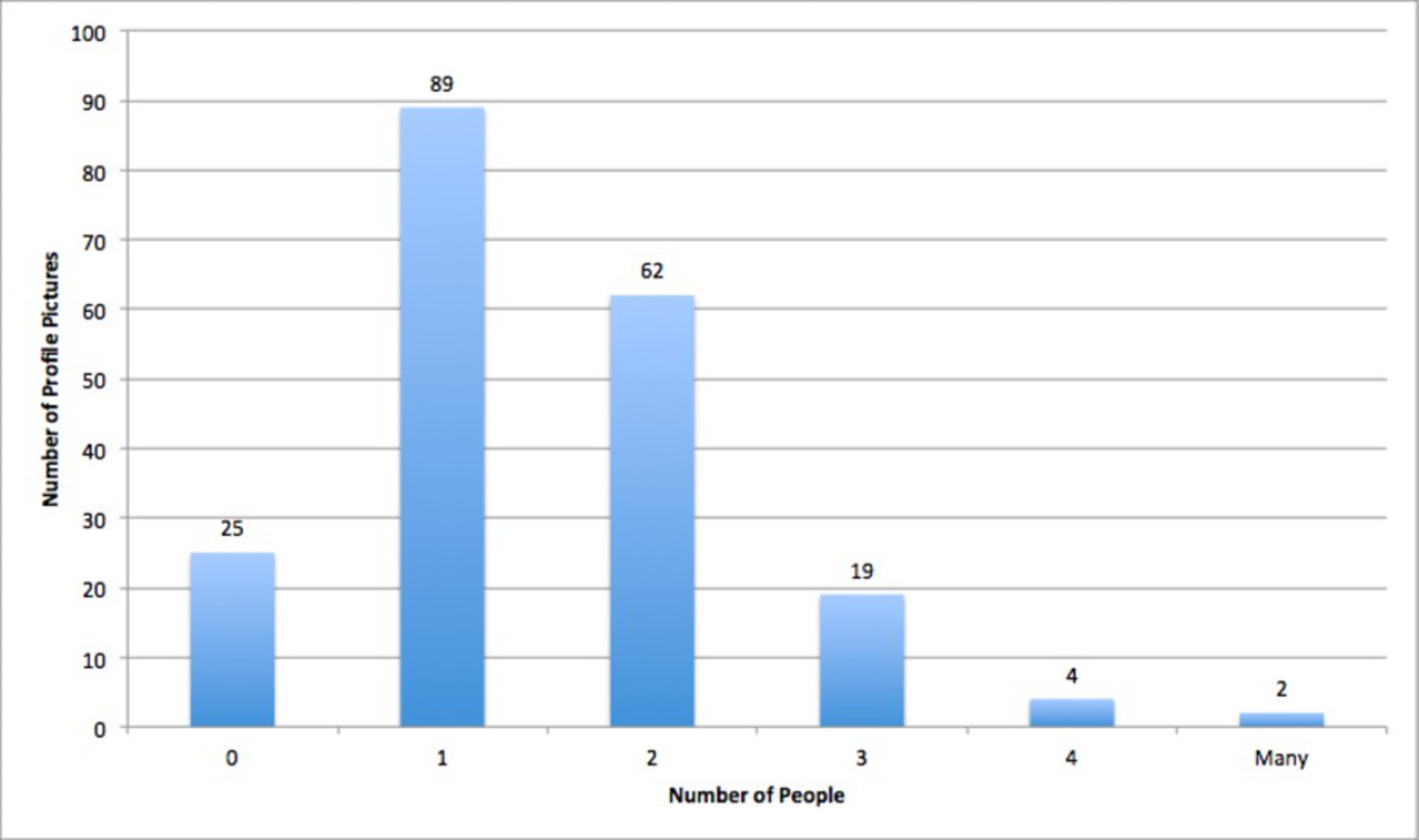 The graph above shows how frequently profile pictures contained certain numbers of people. I was most surprised to learn that 25 people (approximately 12.5% of my sample) had a profile picture that was not even the image of a person. Instead, some of these were images depicting inanimate objects, scenery, or cartoon characters. The average number of people in a profile picture was 1.42 people.

What story does this tell?

Well, if a user's profile is not actually a person, we learn about an object, place, or symbol that has meaning to them. It's something they care about and that is essential to their identity, enough to make them recognizable on a social media site. 25 profile pictures were not of people, and an additional 33 pictures featured the user in such a way that their face was not visible - obscured because they were facing another direction, wearing a helmet, or too far away. A profile picture that lacks a face can't tell us what the user looks like, but by focusing on the surroundings or the setting rather than the individual, it can still reveal what is significant to the user.

If a user's profile picture contains people other than themselves, we learn who plays a meaningful role in their life. The graph below shows who is represented in the profile pictures in my sample. Of the 86 pictures in which the user was featured with someone else, 59.3% of those were with friends and 40.7% were with family members. 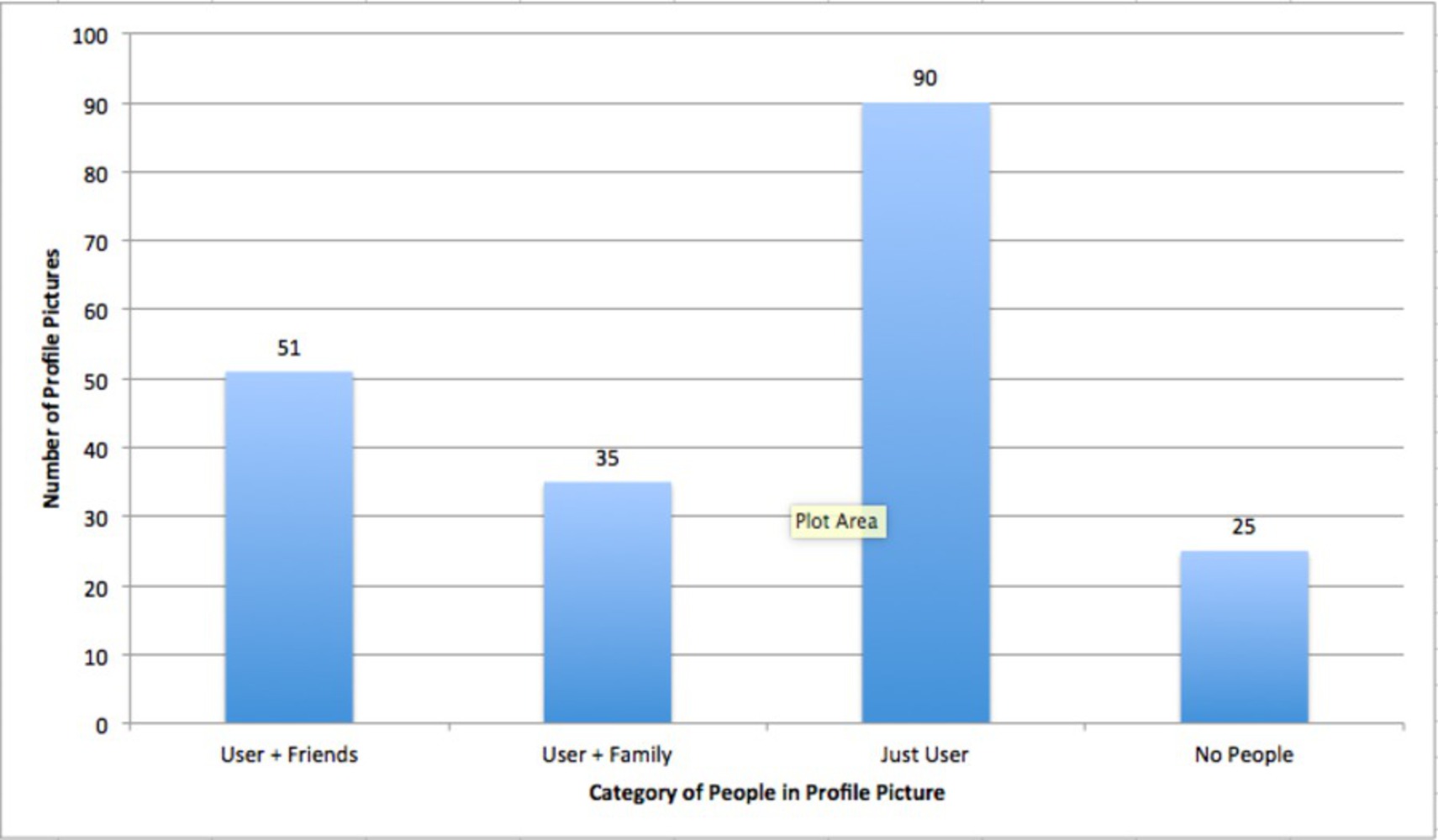 So we've learned something about what matters to the user from the people (or lack thereof) in their profile picture. But a profile picture can also be used as a tool to send a message.

12 people uploaded profile pictures with the rainbow stripe to celebrate the Supreme Court decision in favor of same-sex marriage. By altering their profile picture, these users publicly show their support for gay pride.

15 of the profile pictures I examined were advertisements of some kind. Many were sorority or fraternity paraphernalia, announcements to publicize upcoming events, or notices about joining various committees or clubs. These users know that their profile pictures are prominent on social media sites and will be seen by many of their peers, so they take advantage of the change to promote something they are a part of.

And while these profile pictures send a message - supporting a cause or publicizing an event or group - they still, at the core, are used to reveal something about what matters to the user. We learn what causes they are passionate about, what groups they are involved with, or what events they plan to attend. And a profile picture is not used to show just any old thing they care about. Rather, it's something so prominent and so important in their life that they chose that single thing to represent their entire profile - and thus their entire online identity - on Facebook.

I enjoyed how you examined the message, or rather story, that Facebook users convey through their profile pictures. You went into some detail regarding the different elements that commonly appeared in these pictures, such as an obscured face, presence of friends, and advertisements, and made these people feel 'alive' through their images. The bar graphs were also really clear and well explained. I will admit that I usually think of most selfies as small cries for attention so it was refreshing and stimulating to listen to your view in which these pictures are more like photographs on the wall, pictures that hold special memories or matters of personal importance.

This project critically examines 200 Facebook profile pictures and analyzes how people present themselves through these images.