Extensive research on memory recall showed that the most vivid memories are those that are elicited by a scent. With this in mind, I set out to create a product that uses both visual and olfactory cues. In particular, I recognized that in long distance relationships there are attempts made to essentially remind the person of you and your affection for them. Often times this reminding is done by looking at old pictures and reminiscing on past moments together. My prototype, therefore, aims to answer the following question: is there a way to enhance this visual way of remembering a moment together by adding in olfactory cues?

My product is both a mobile application and a physical box that is essentially a hybrid of a humidifier and a picture frame.

The mobile application allows you to register the box and select an image that you want to display on it. The application runs an algorithm to determine what scents are prevalent in the location you took the picture in. For instance, if I select an image taken at Niagara Falls, Canada, the application runs the algorithm and recognizes that the Daylily Hemerocallis plant grows abundantly in that area. You are then able to order this plant in the form of a scented oil, which will get delivered to you.

You can then ship the registered box and scented oil to your loved one! Once they plug it in you can see it online on your mobile application. Now, whenever you want them to remember you by recalling a special moment you guys shared in the past you just go on your mobile app, select the picture you choose and click activate, which then displays that picture on the box and diffuses the scented oil. With just the click of a button, your loved one will get a vivid memory of you two!

Taking this scenario a step further, what happens when you click 'activate' frequently and don't let your partner catch a break from the scented oils? The product then turns into a subtle way of being intrusive in their life in an attempt to be remembered all of the time.

RME_investigation1_mobile_app from graciela on Vimeo. 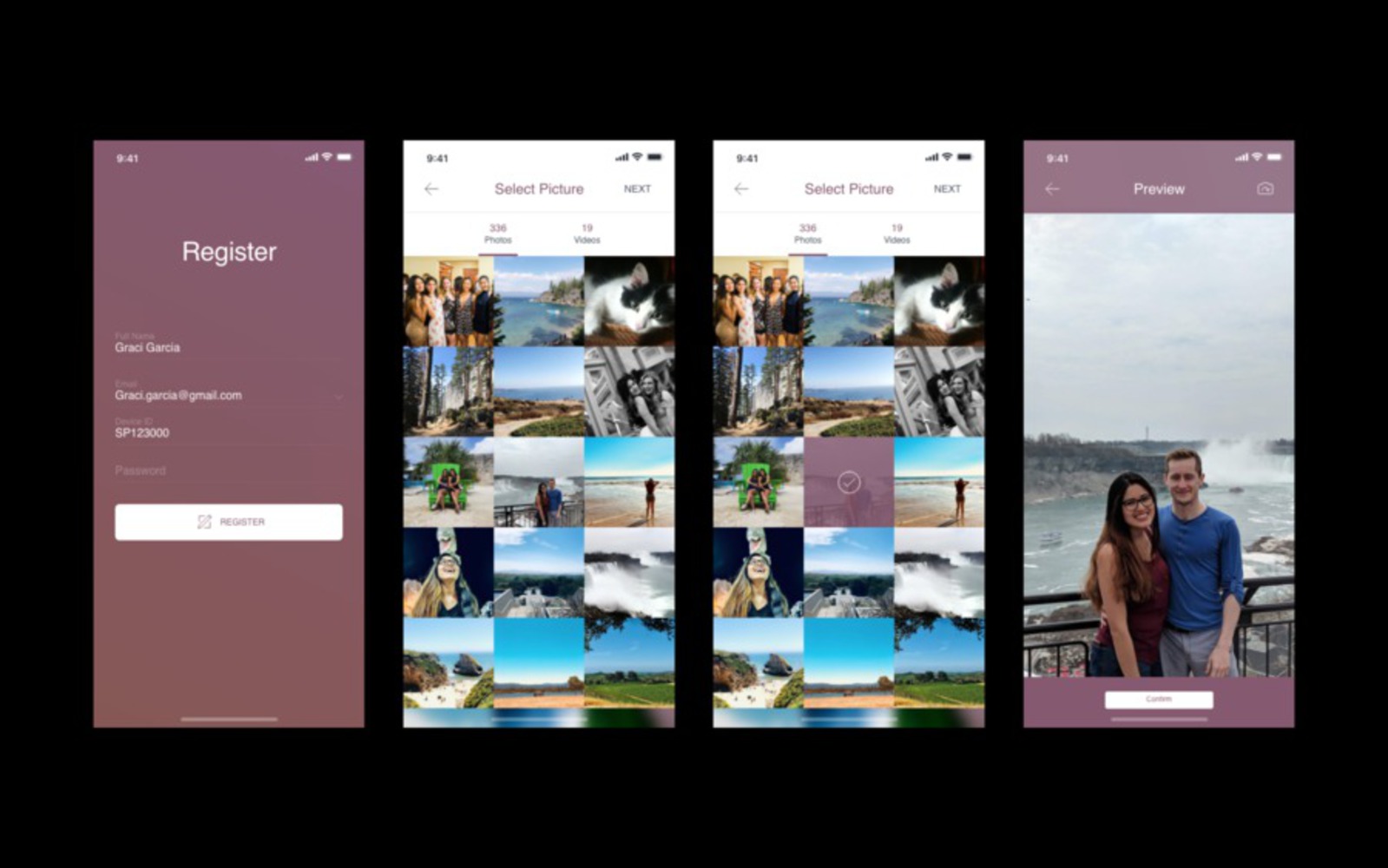 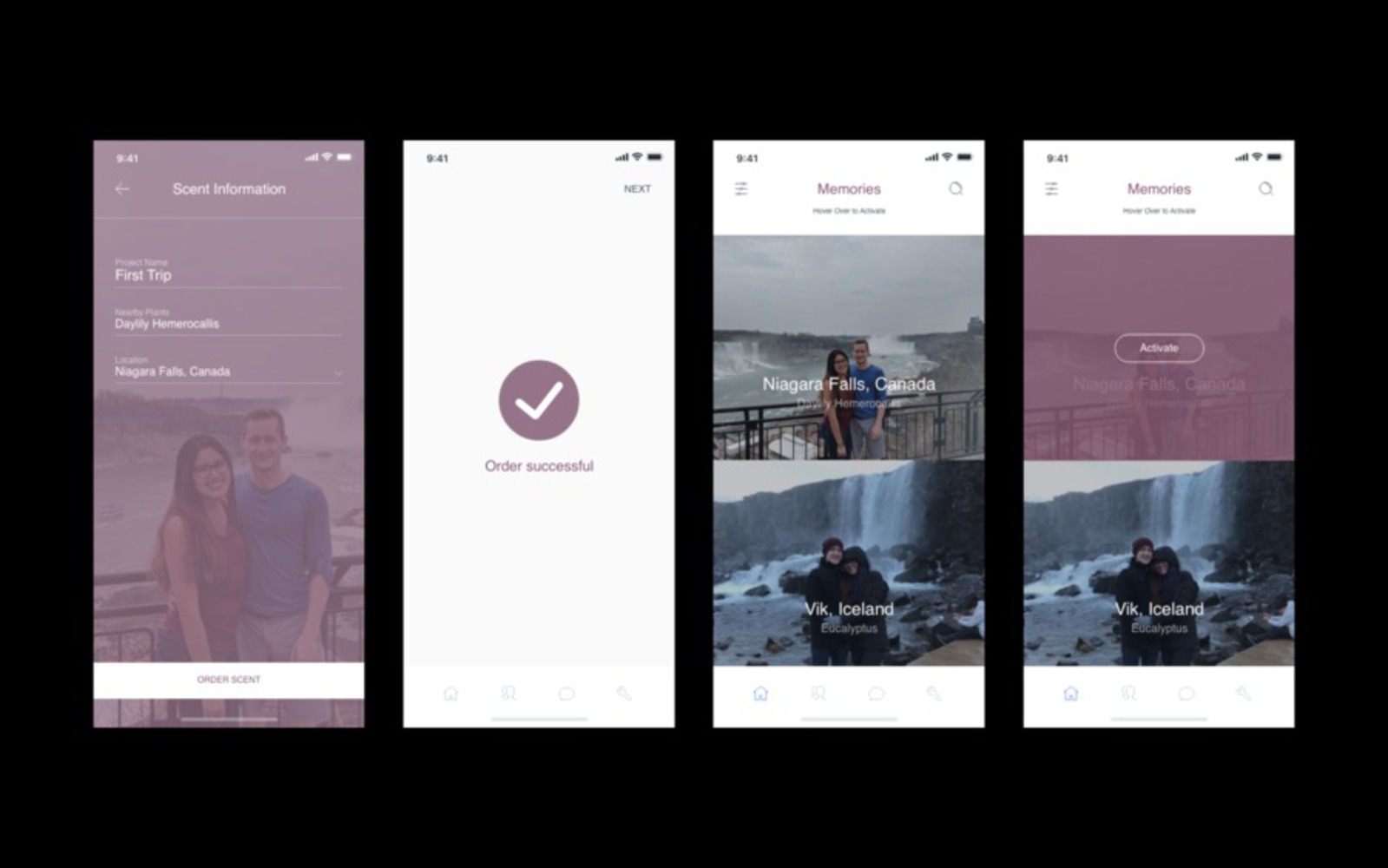 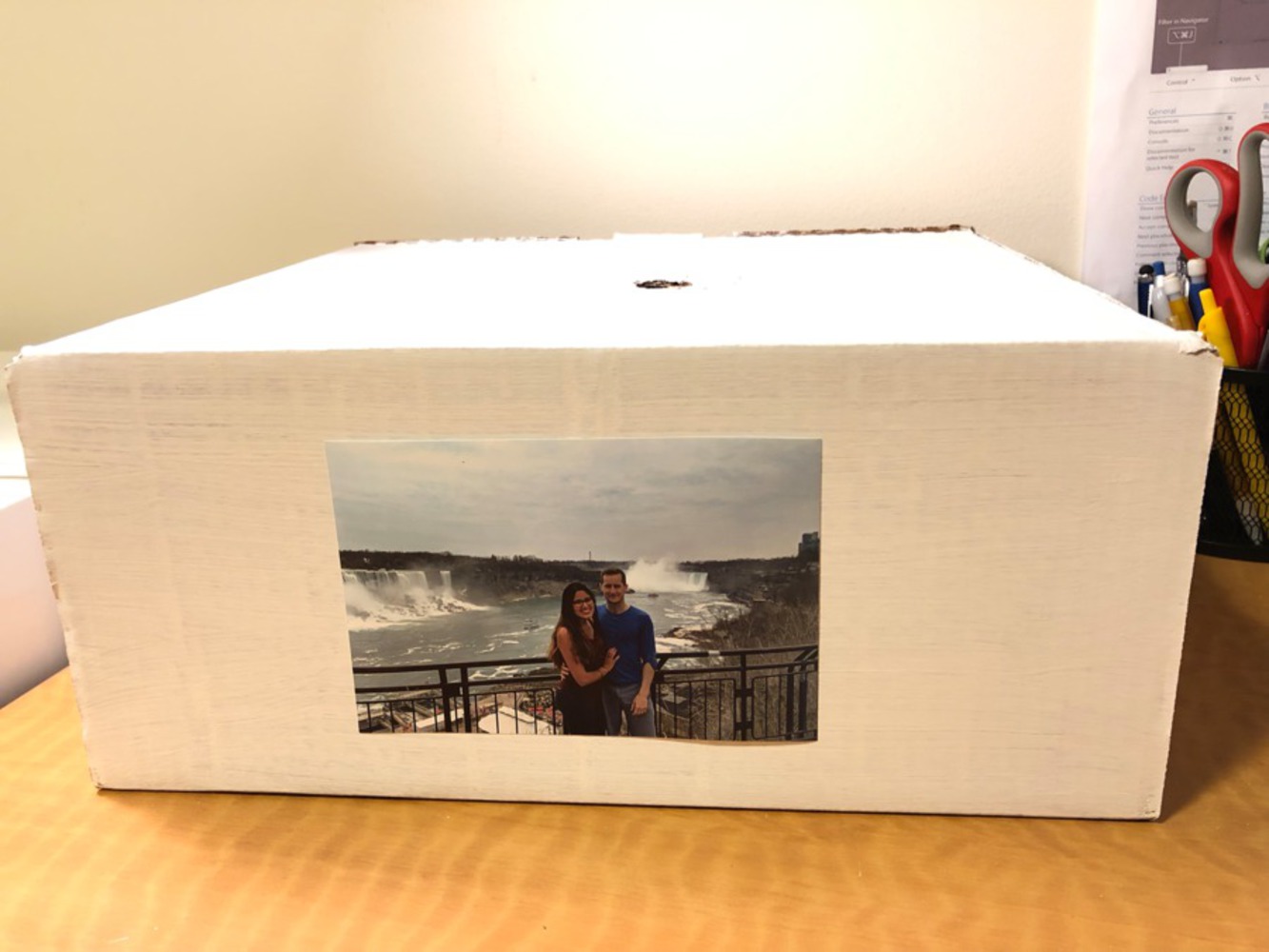 My research showed that memories triggered by smells are much more emotional and vivid than a memory triggered by any other sense. This is because “the act of smelling activates the amygdala-hippocampal complex, which processes emotional experience and emotional memory.” [3] This was the reason why I wanted to capitalize on our sense of smell in order to allow people to have a more evocative recollection. Before I began my own development I looked into other products that utilized smell.

The Smell Memory Kit uses “8 selected smells as motivational elements to evoke and share autobiographical episodic stories among addition care clients...” and led to the realization that smell could be used as a stimulant and can “facilitate a means of bringing the past back into the present.” [1] 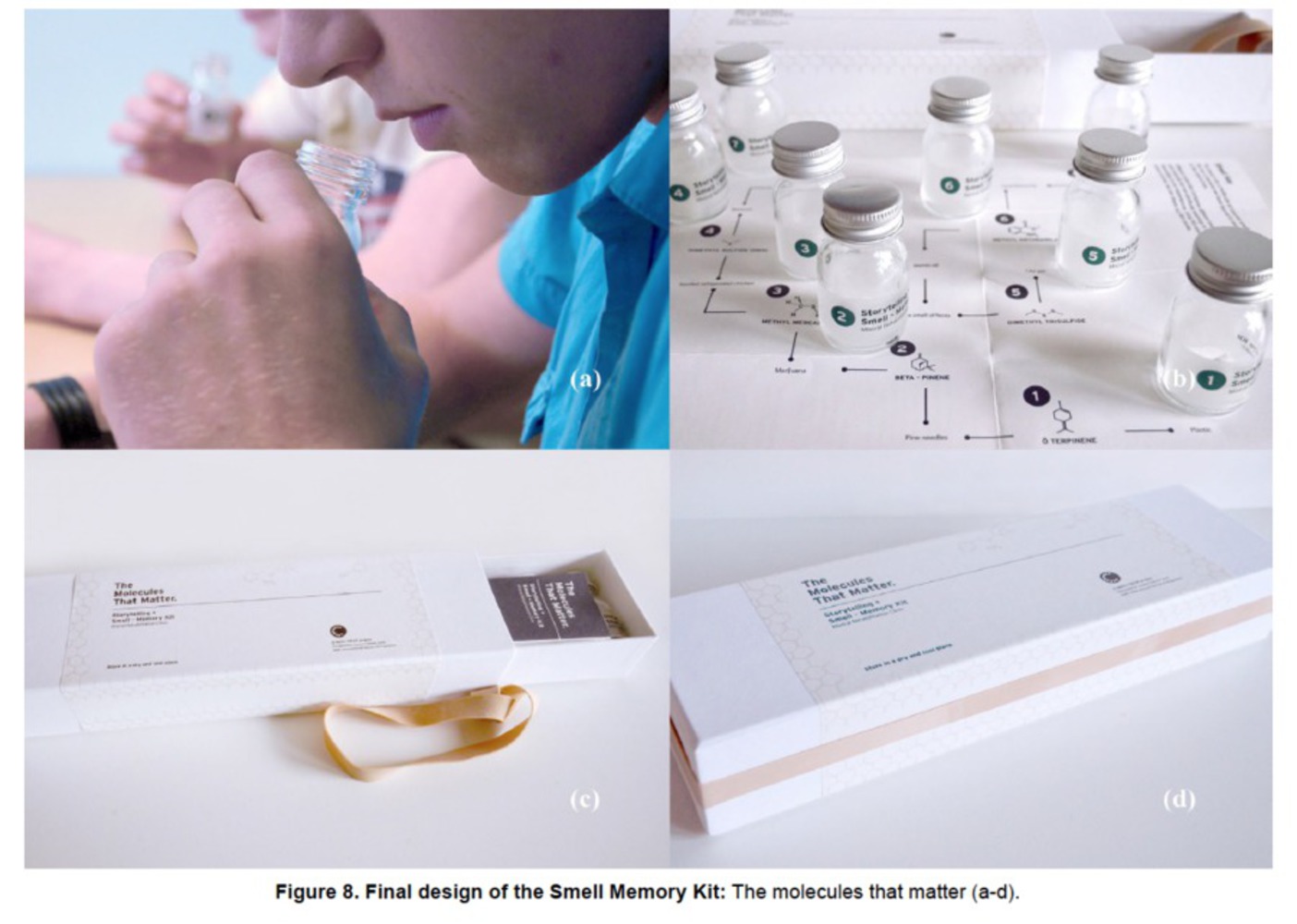 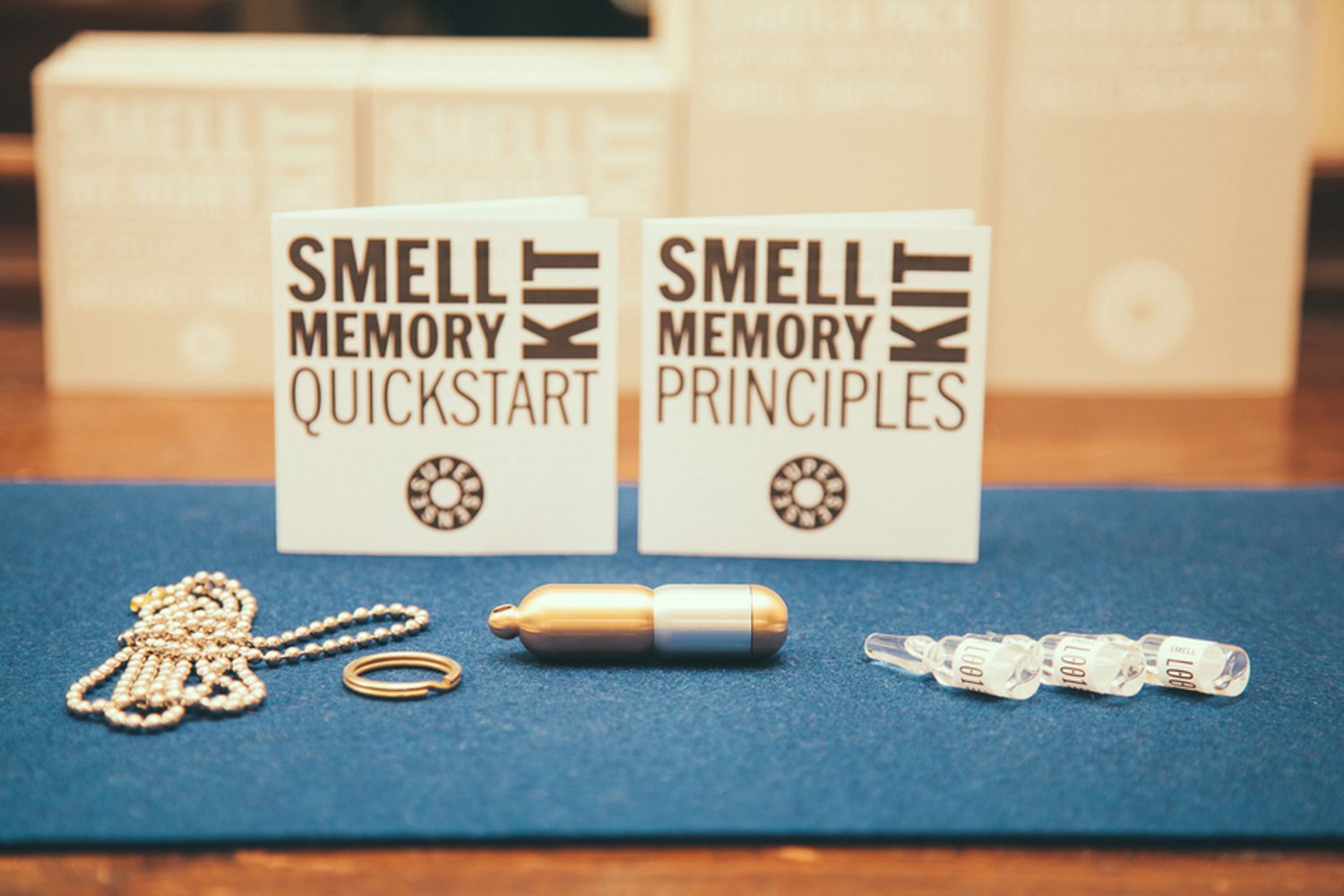 Finally, the Madeleine allows you to capture the smell of an object by placing it under a funnel and then having it be artificially reproduced. [4] In this case, you can choose to retroactively immortalize a moment by recreating the smell in liquid form.

HOW TO SUCCEED WITH YOUR MADELEINE from AMY RADCLIFFE on Vimeo.

For my project, I was inspired by the above products, particularly the idea of capturing the scent of an object and the concept of having a vial of that scent, which became aspects of my own work.

I began the process with a very basic illustration of what I wanted my product to be. The idea was that once you uploaded the image to the application it would distinguish the objects in it and use that as a way of letting you know what scents were possibly nearby. You would then get the vials of that scent and place it on the picture frame. 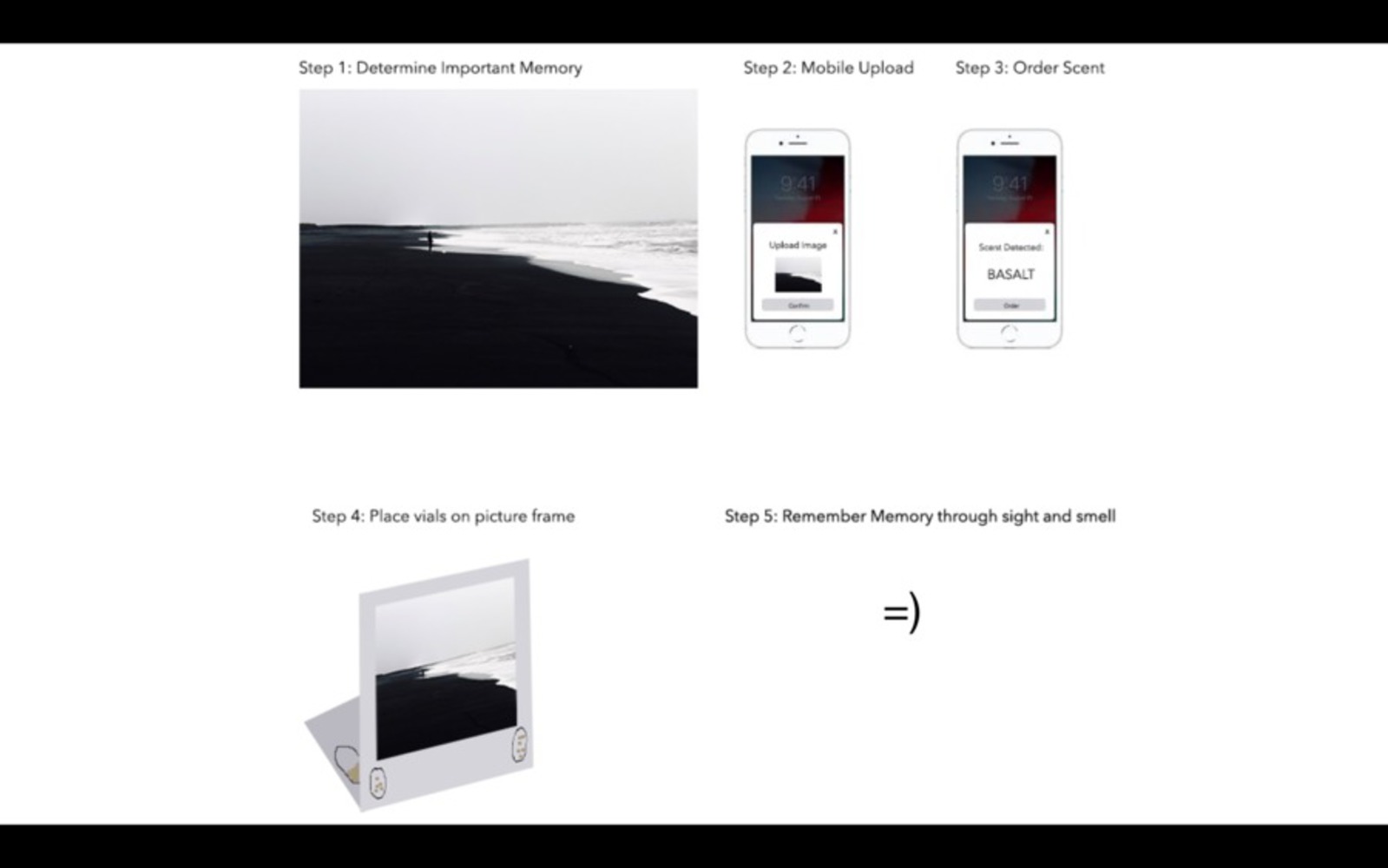 After receiving feedback on my initial idea, I realized I needed to answer the following questions in order to fully flesh out the product:

This helped me realize that often times the pictures we put up around our apartments are of moments we shared with loved ones. After much thought, I came up with the final scenario for my prototype.

In terms of development, I was looking into a scent memory case study [5], which presented a tutorial using a fan and heating pad to diffuse oils. Unfortunately, the physical computing lab was missing some of the key components for this project. While I waited for the pieces to be restocked, I tried to find other projects using different components. Unfortunately, this search wasn’t successful. I then tried coming up with a workaround and figured I could program a solenoid to poke the 'on' button of a humidifier to still get my idea across.

I spent some time looking at projects that used a photon and a solenoid so that I could wire everything up appropriately. I found the following project that unlocked a door over wifi using a solenoid [6], which I could modify for my project. I eventually set up my particle photon with the Tinker firmware using the guide on particle docs [7]. I hadn’t heard of Tinker before but after reading up on it, it seems to be a very useful tool for rapid prototyping! Unfortunately, throughout this process, my photon would not exit listening mode, which resulted in many google searches. I realized then that the particle community is actively trying to help others. I tried various proposed fixes including particle doctor [8], but could not find a way around the issue. I’m currently still trying to troubleshoot and hope to soon try out Tinker! As I continue to troubleshoot my plan for demo purposes was to manually turn the humidifier on.

Along this time I was also mocking up wireframes for the mobile application and after some time got to the final version shown above in the prototype section. The next step was to come up with an enclosure for the product. I tried working with an actual picture frame but had a hard time including the humidifier part of it. I then cut up various cardboard boxes to try to make one that could work well. A few days later I found a shoebox of sorts that would work much better! Along the way, I got feedback from peers in regards to the design of the application and the look and feel of the box. For some reason, they couldn’t get past the fact that it was a cardboard box, which took out some of the appeals of the project. I then decided to paint the box, which resulted in people feeling more invested in the project!

I’m curious to know if there is a way we can retrain our brains to associate a scent to a different memory. What if it is a generic scent that you smell frequently, such as coffee, what memory will it invoke and could you train your mind to invoke a different moment? Also, what specifically about scent is it that we pick up on. For instance, what if I was wearing a specific perfume, my friend was wearing a different cologne, and we were both sipping coffee on a mountain… which smell would I associate to that memory and how will that differ for my friend?

As I was working on my project I also eventually realized that it has the potential to be abused and as such, I think that moving forward in any project we work on we should try to think of possible misuses and ways to combat them.

I realized there is value in actually trying to situate your project in a real environment. Thinking of the questions I posed above (i.e. how is it triggered) helped me to hone in on a specific use case. However, I also realized that there is a lot of benefit in actually trying out the prototype and having other people try it. Doing this not only helped me determine that it would be best to paint the box but it also helped me realize the potential misuse of the product.

There is definitely more that I would want to do with my project, such as wiring up the particle photon so that it’s completely working remotely and having the heating pad and fan properly working. I’d also want to continue to explore the potential uses of Tinker since it could most likely come in handy for future projects.