Rain rooms are not just for museums. Our artificial rain installation animates one of the isles at Hunt Library.

Once settled on our concept, the initial artificial rain room idea was to take a study room and hang twine from the ceiling, then have a blue rotating light make the twine simulate streams of rain, and add speakers that play rain shower sound. The visual end result and a basic method of bringing the idea about was in mind. Advantages of advancing with this idea was that it had the most use of media, while a foreseeable difficulty was that execution would be challenging and the desired effect might not be reached. The goal was to the create of a non-invasive yet completely enticing, alcoved installation of rain on one of the library floors. Ultimately the advantages led our group to proceed with this idea because the risks involved were worth being able to make this contribution to the Hunt Library.

The primary installation that inspired our concept was Random International’s Rain Room . The artwork is an immersive environment of continually falling water resembling rain fall that ceases in regions where sensors detect an object such as people standing or moving their arms. This allows visitors to stand in a raining environment but remain completely die. Thus the installation allows visitors to experience the seemingly impossible. Furthermore, a natural element, rain, is brought under human control. Rain Room “presents a respite from everyday life and an opportunity for sensory reflection within a responsive relationship,” according to the project description on LACMA’s website. Random International’s Rain Room and ours both question human experiences through the observation of natural phenomena and behavior within certain environments.

Another installation that influenced our project was Takahiro Matsuo’s White Rain. It is an installation of white light, focusing on the illusory visual effect of infinity produced through the behavior, characteristics, and beauty of rain. The installation uses a specially designed acrylic bar encasing energy efficient LED, sensors and other motion sensor equipment. The result is an immersive experience brought about as irregular rain composed of light falls and changes as visitors move within the space. We used horizontal line projections to represent the droplets, similar to the the white lights Matsuo used.

A third influence on our installation is CLOUD by Caitlind Brown and Wayne Garrett. The piece utilizes pull chain switches and traditional household light bulbs. During exhibition, viewers could interact with CLOUD by pulling the chains and working collectively to animate “lightning” on the sculpture’s surface. As viewers move beneath the cloud of light bulbs, CLOUD reveals its underlying structure, a reveal of show and involvement which breaks the illusion of delicacy and lightness conveyed by the outside of the artwork. Our artificial rain room is a singular, observable phenomenon when viewed from afar, but from up close or from within, the viewer can process our installation as an assemblage of twine and pixels. Similarly to CLOUD which tightly packs all its viewers underneath, the location of our installation either provides cover for solitude or makes the collective of viewers more dense. Thus our location is very multifunctional and adaptable to various library visitors.

The solution to creating a recognizable rain effect was to project horizontal lines moving downward on the twine using a standard projector. The twine only relayed points from the white lines, so with enough twine strands placed irregularly (not strictly in grid formation) the horizontal lines, which were our effective approach to creating our desired effect, were completely translated from video animation to a plausible visual phenomena. We also considered projecting a video of a rain-like effect onto the twine, which too would theoretically give the projection a three dimensional effect, but this alternative was not necessary since we were able to create our desired effect using simpler geometric projections. Along with the projections to create an illusion of rain fall, we considered placing fans to induce motion in the strands so that the twine would wiggle and thus the rain would fall under angle as if a more sever storm, as well as placing speakers to play rain sounds. Both these additions were deemed to be detracting from the impact of observing solely rain fall. After testing out those options we did not pursue those additions in the final version.

The essential ingredient in our installation is twine, yet in the final version it is unrecognizable or just indistinguishable. The illusion of rain, water, a substance of an altogether different chemical state than twine, introduces the transformative qualities of our installation, in regards to both materials used and to the location in which it is presented. The hanging twine is the tangible component of the installation, a feature unique to our project with regard to the extent to which a visitor can interact with the material: it can be held, walked through, or swayed, for example. A sufficiently dark isle makes it possible to see the rain effect. A projector connected to a cached laptop projects horizontal white lines seen on the twine from an animation played on our laptop. Our work on the installation pertains to its tangible qualities and in this situation did not include creating the animation, which can be found on YouTube and viewed on a standard screen by default.

Our finished installation succeeded in tackling the biggest challenge we faced when beginning our project, namely ensuring that the rain effect is recognizable and plausible. Despite its structural size, the installation is not perceived to take up much space because it is tucked away at the end of an isle towards the wall. The installation enhances standard library functions by adding an element of tranquility that can calm the rush to complete last minute studying. The installation itself does not call for nor require expansion in scale; rather it is a process that we have put into motion and it mostly self sustains. The contrast of light on twine over the background could be improved in daylight and potentially reflect the brightness during different parts of the day. This way our artificial rain more organically fits into its setting and into what the viewer is experiencing in his or her day. Lastly, it could be beneficial to change the projector’s spot from on the floor where to some degree it interferes with our work’s accessibility to somewhere out of the way, like atop a bookshelf.

The advice/warning we received when the assignment was announced to us rings particularly true in hindsight, that a simple sounding idea takes much longer to implement. Thinking of material played a big role in our project because we didn’t have many physical objects/supplies to use, so projections and the media component was to our advantage since projection would allow is to involve items we did not necessarily possess. The site specificity affected our project completion timeline because we needed to facilitate a last minute move. Additionally, our project could only be installed close to the day of exhibition because it had to be installed into structures available on site and could not be transported as easily from one spot to the next. 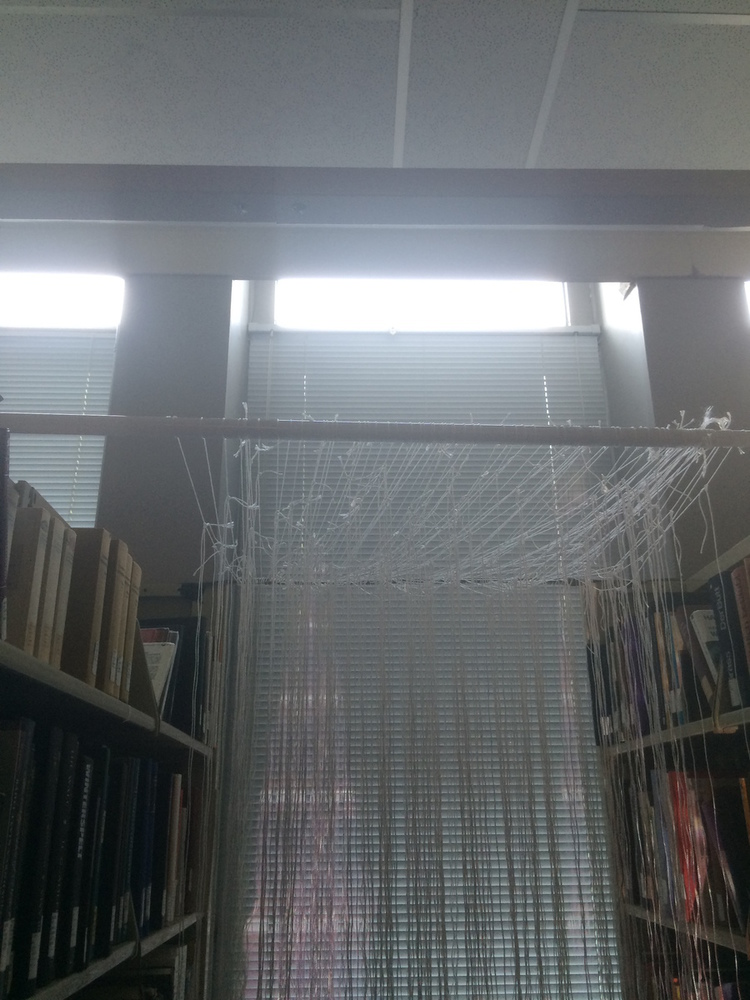 4 comments · Latest by Stephen He

I was definitely impressed with your installation when I saw it! It was very beautiful, and I would love to see it hang around campus in more places.

I think you could expand on this with other shapes besides linear lines. To make it more similar to rain, you could have incorporated irregular length lines that fall down at different intervals and such. I think it would add to the illusion.

I think your project has the potential to attract a lot of people. Have you thought about how to incorporate viewer participation?

Rain rooms are not just for museums. Our artificial rain installation animates one of the isles at Hunt Library.