Made by Jessie Li and Stephen He

An environment that invites one to relax by playing with balloons filled with lights to create creative light shows. 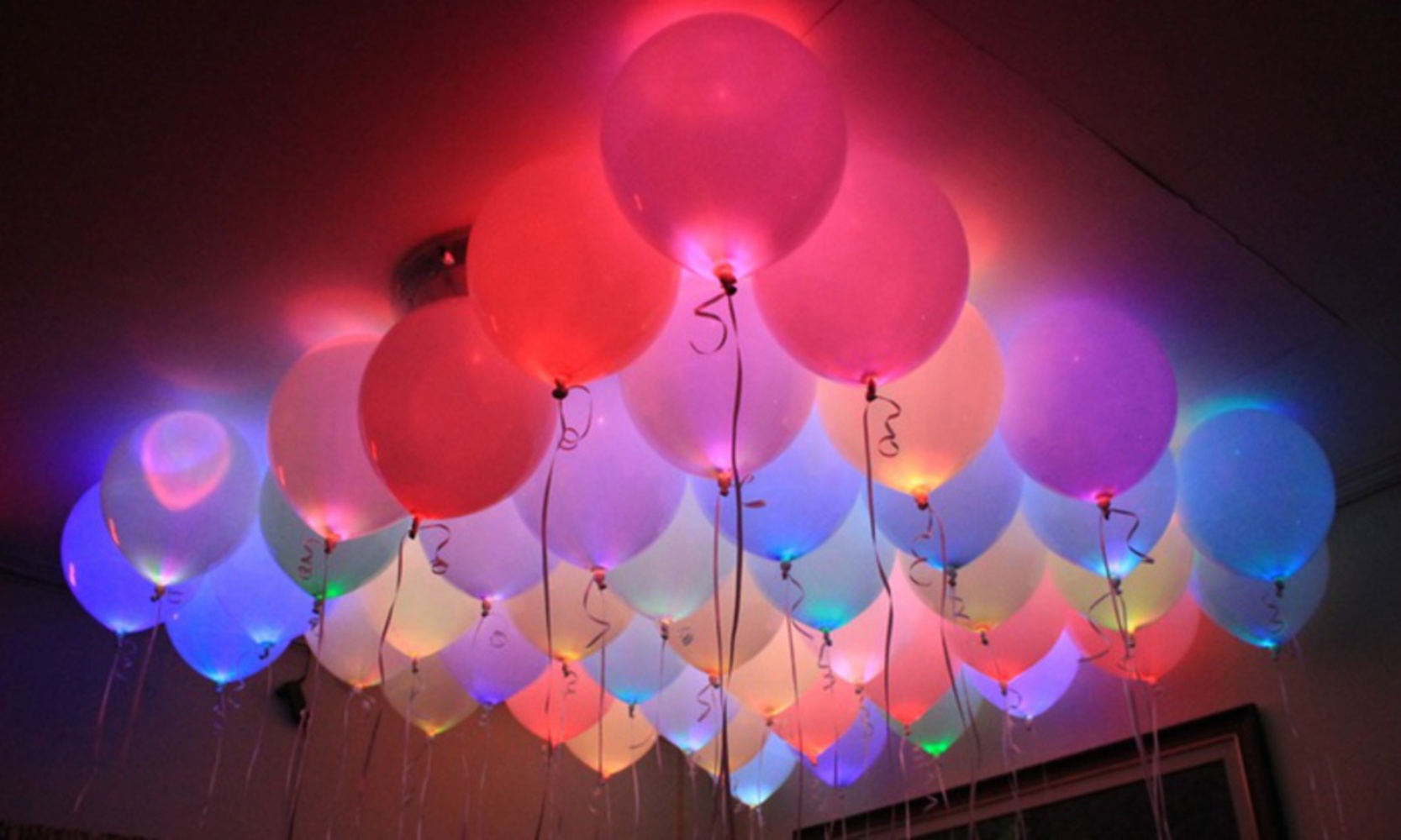 Our proposal is to combine some of the ideas from the “Newton’s Cradle”, “Liquid Lightbending“, and “Soothing Projections” installations to make a calming environment out of light up balloons. The fundamental concept is to fill a room with balloons that contain LED lights to create an ambient and peaceful lighting. To achieve this concept, we plan to place LED lights in balloons that are filled with water/helium around a dark room, to have lights emanating from all around the room, as well as from the ceiling. Potentially, we could also include lights that emanate from different colored objects of various shapes and sizes, places selectively around a room. We have tentatively selected one of the study rooms in the Hunt Library basement as our target environment because it is a condensed location and also is a place of study. Our hope in this concept is to alter a space that might be connotated with stress and hard work with positive vibes and to change the experience of studying to be more positive and relaxing.

This installation consists of 70 white balloons filled with LED lights hanging from the ceiling in clusters of four or in singletons. The balloons create a cloud-like structure that is calming and relaxing to the participants. Viewers are encourages to interact with the balloon structures by shaking, pushing, punching, spinning, pulling, etc. the balloons to make the lights within the balloons move around. The moving lights within the balloons form a unique light show as a reaction to one's movements. This piece was made for the intent of creating an interactive installation that would relax its participants.

This installation was set up in one segment of Studio A in Hunt library.

This product consisted of 70+ white balloons with round LED lights inside the balloons scattered around the area. The LED's were weighted on one side.

The balloons were clustered together in various sizes, with the size of balloon and number of balloons per cluster varied. The number of lights per balloon were also varied between one and four. Each cluster was suspended at varying heights from the ceiling by flexible, clear, nylon wire.

We created a 'cloud' like space, where you could walk around the installation and interact with the clouds, watching them light up and rumble as the lights moved around the balloons.

We made this installation with the primary goal of converting an area into a place of relaxation. We wanted an environment where people could stand in and feel calm. We wanted to target those actions that are related to relieving stress, such as forceful movement (i.e pushing) in conjunction with using soft objects (i.e balloons). One of our big goals was to be able to attract people to our installation from afar. This meant building an installation with a significant scale, as well as it having aesthetic appeal.

Scattered Crowd is a giant room of thousands of white balloons that are suspended in a "billowing wash of sound". The end result is almost a fairy-tale esque scene where the balloons appear as white snow or even giant rain drops. The white / clear balloons give a sense of regal elegance, which is fascinating because of how cheap and ever-present balloons.

From this piece, I want to consider using only white balloons, and possibly removing lights / incorporating lights sparingly. Additionally, there is merit in discussing what sizes of balloons to use. 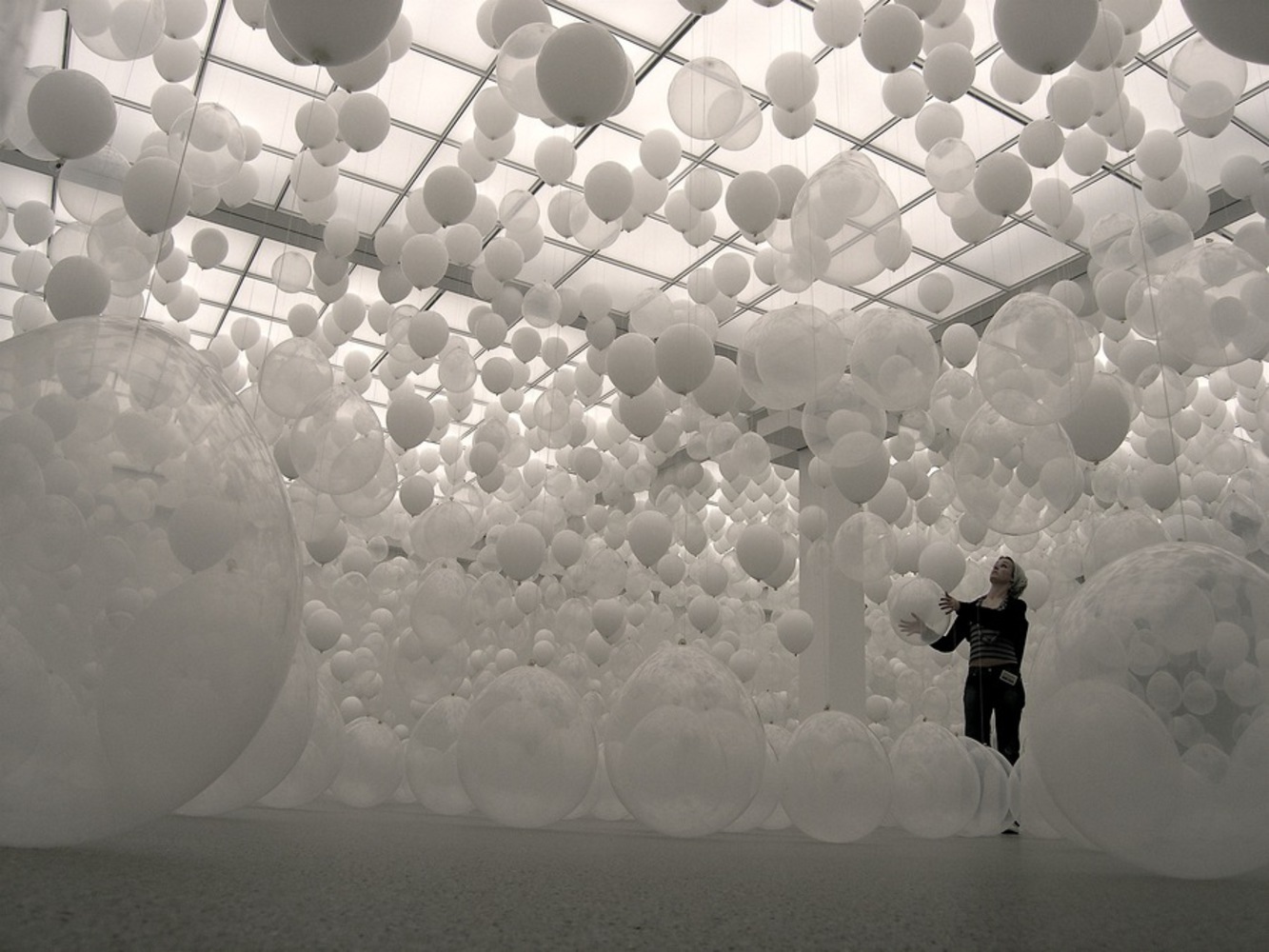 Massimo Silenzio is installed at the Circus Maximus (the largest chariot racing stadium ever built). At night, the arena floor is list up, with sphere undulating and cycling through color changes, which creates a beautiful and ethereal, eerie feeling.

The result is a calm and glowing environment, in which the light alters an otherwise boring field at night into a beautiful landscape.

From this piece, we want to create and replicate the liminal feeling that the installation inspires. 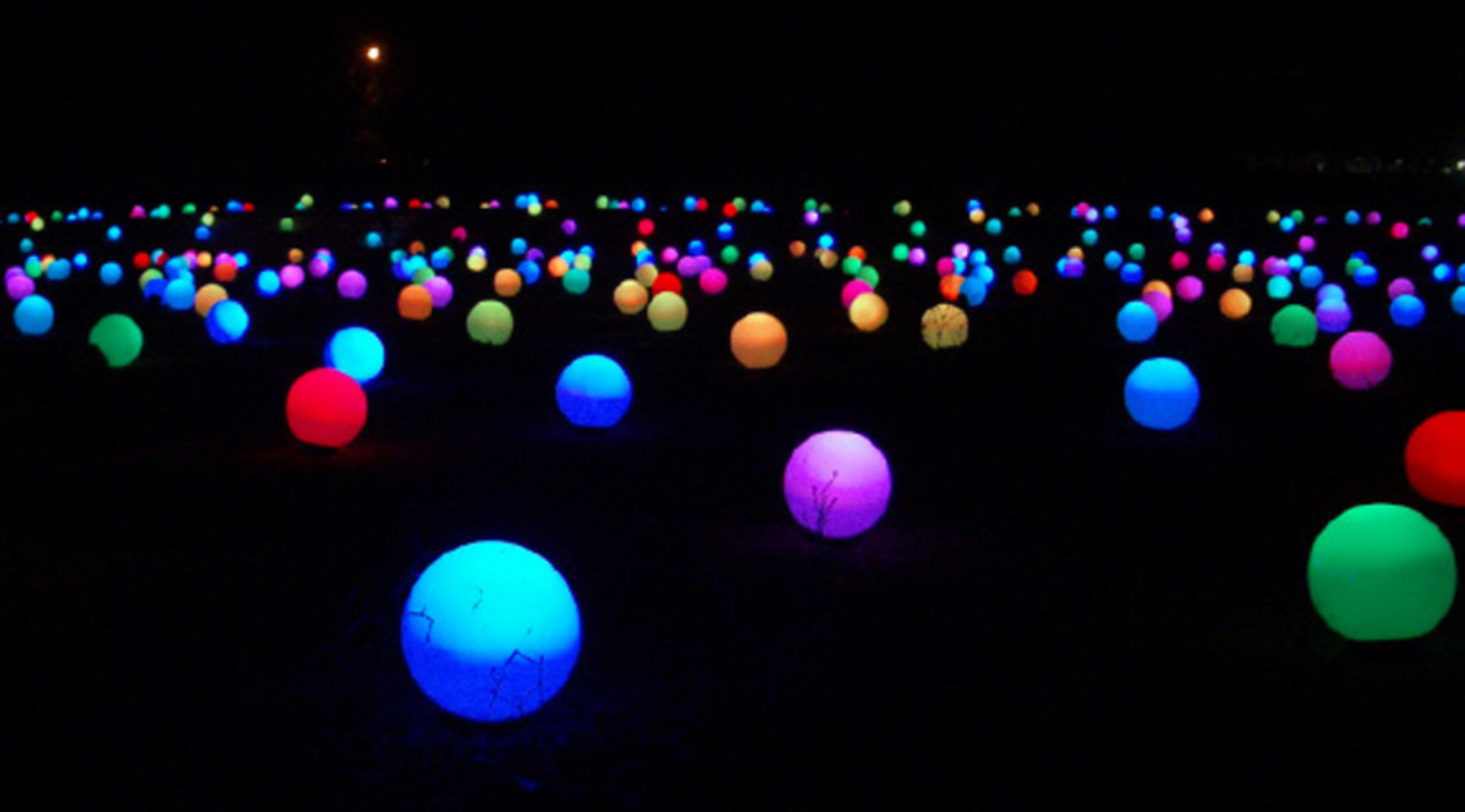 One of the most breathtaking light-related events are Lantern Festivals. Potentially thousands of floating lanterns glowing against the night sky can be a fascinating experience. As the lanterns float further away, it seems like a flower blossoming. I want to work with this transient state for the art, so that each moment is different than the next. Particularly, maybe we should experiment with having participants move and manipulate balloons themselves. 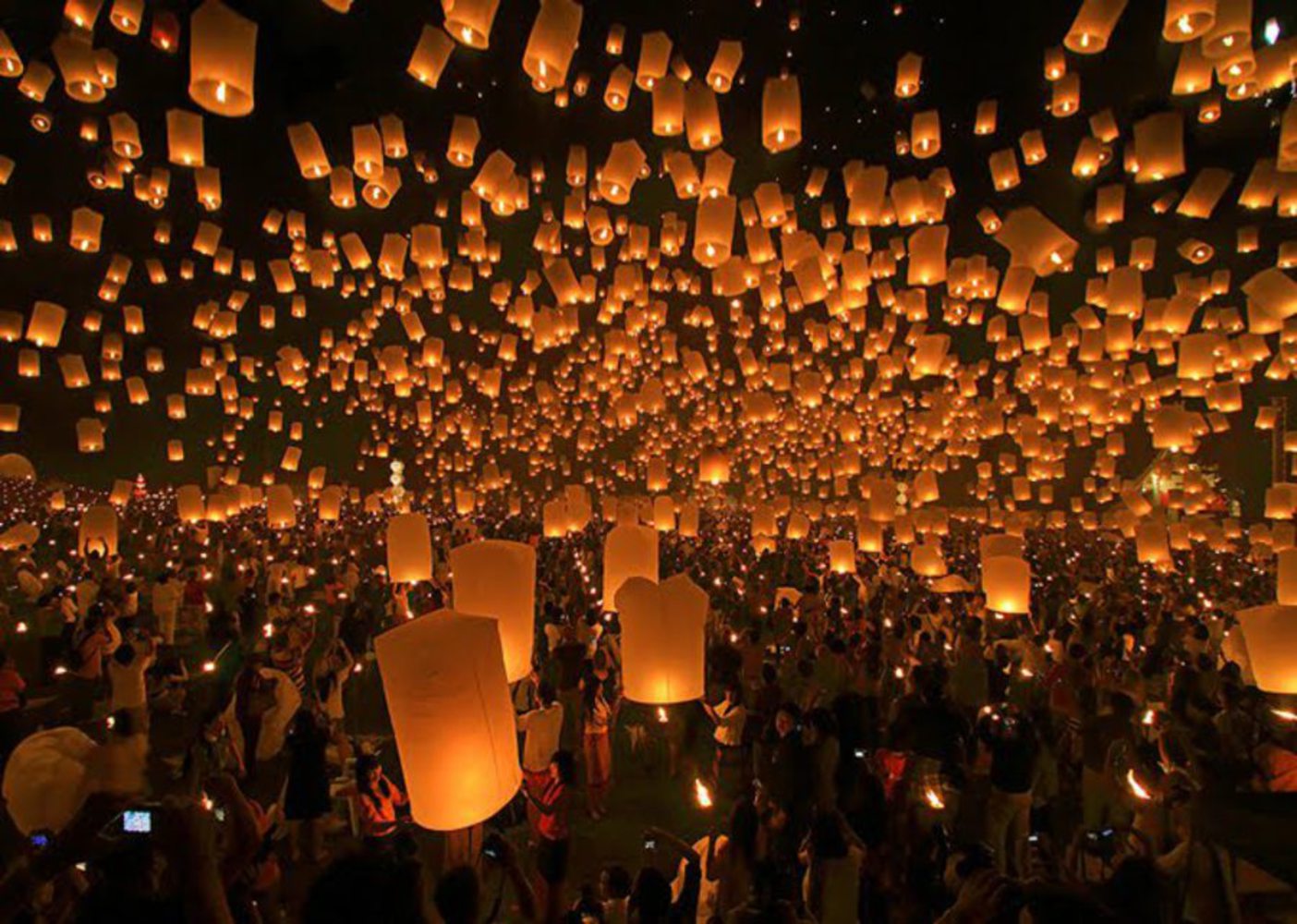 Newton's Cradle, created by four fellow classmates, was an installation that involved building a large oversized Newton's Cradle that glowed in the dark. The concept was to create a fun stress relieving environment with the cradle. The glowing balls of different colors definitely attracted the attention in the room, and it was interesting to see how the balls interacted with each other. We wanted to use this idea of lights in containers, as well as interaction by the participant to create a reaction in the installation.

Liquid Lightbending, another installation that was created by our fellow classmates, involved projecting light onto water to create a beautiful space that you could experience. We took inspiration from the environment and feel of the project - we wanted to create something that could inspire a feeling of calmness and peacefulness - to give the art a sense of quiet and tranquility.

Our inspiration, Newton's Cradle, used multiple colored objects to create a rainbow of balls. As a result, we initially wanted to use multiple colored balloons. However, we ended up deciding that we wanted to highlight the lights inside the balloons rather than the colors themselves. Additionally, white balloons created the appearance of clouds, so we went with white.

We were initially going to have single balloons hanging down from the ceiling. While it created an interesting environment, we thought that having only singletons limited the possibilities of the lights in the balloons. Placing balloons in quads allowed for balloons to interact with each other more directly. Additionally, it served the cloud imagery even better. We limited the balloon groupings to quads for logistical reasons- tying 6 balloons together was possible, but it appeared lopsided and less appealing.

We wanted the balloons to be spaced out as evenly as possible so that the participants could still walk within the balloons easily but would never not be immediately surrounded by white lights. We felt that this balance was important to get right because of the iterative nature of our installation. As a result, we first experimented with a loose arrangement of balloons, then continuously filled in gaps until we were satisfied with the spacing.

Work was pretty much divided evenly. We met to discuss plans and our course of action multiple times. All work was done when we were together, so every part of the design process was a group effort. The idea was created and refined by the both of us, and the experimentation and the setup of the installation was done in joint.

Jessie was in charge of purchasing supplies, however.

My inner critic is real proud of this project. Developing the idea into a physical installation was extremely rewarding, and it was amazing to see the positive reactions to it during presentations. I believe that we created that "relaxing" environment we were going for, and that our project positively influence the participants.

I've learned that there is more to consider when thinking about material choices. We felt balloons worked the best logistically- easy to make different sizes, easy to put lights in, easy to manipulate, easy to push. However, we did not account for the fact that balloons are extremely prone to static electricity. This caused some problems as hair and dust was constantly being attracted to our balloons as we hung them up.

If I were to do this differently, I would try to expand upon it to fit towards children. This means not using fishing wire because children could choke themselves. We could have floating balloons (using Helium) with these lights and having the children be able to toss and throw the balloons in a room. 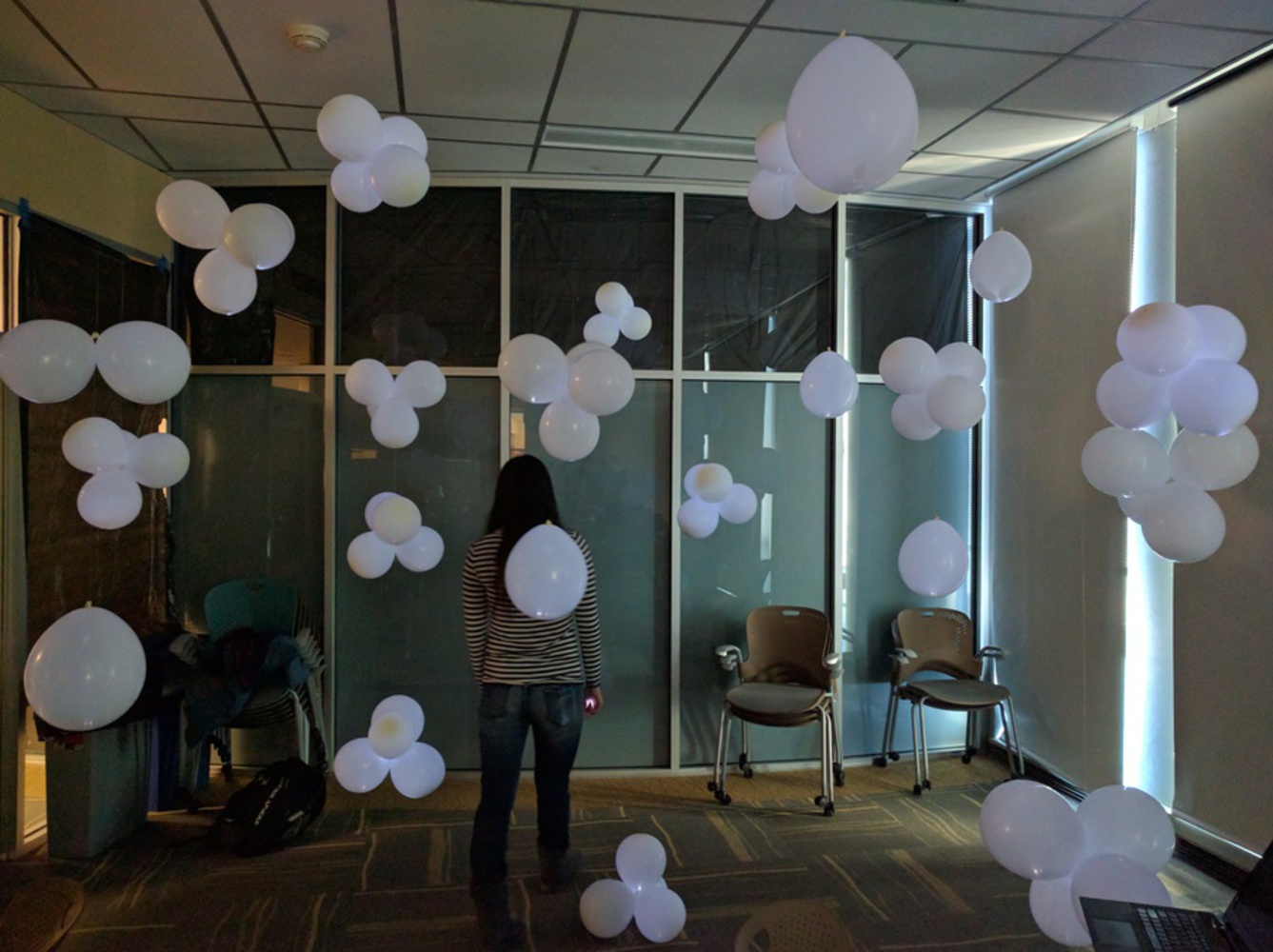 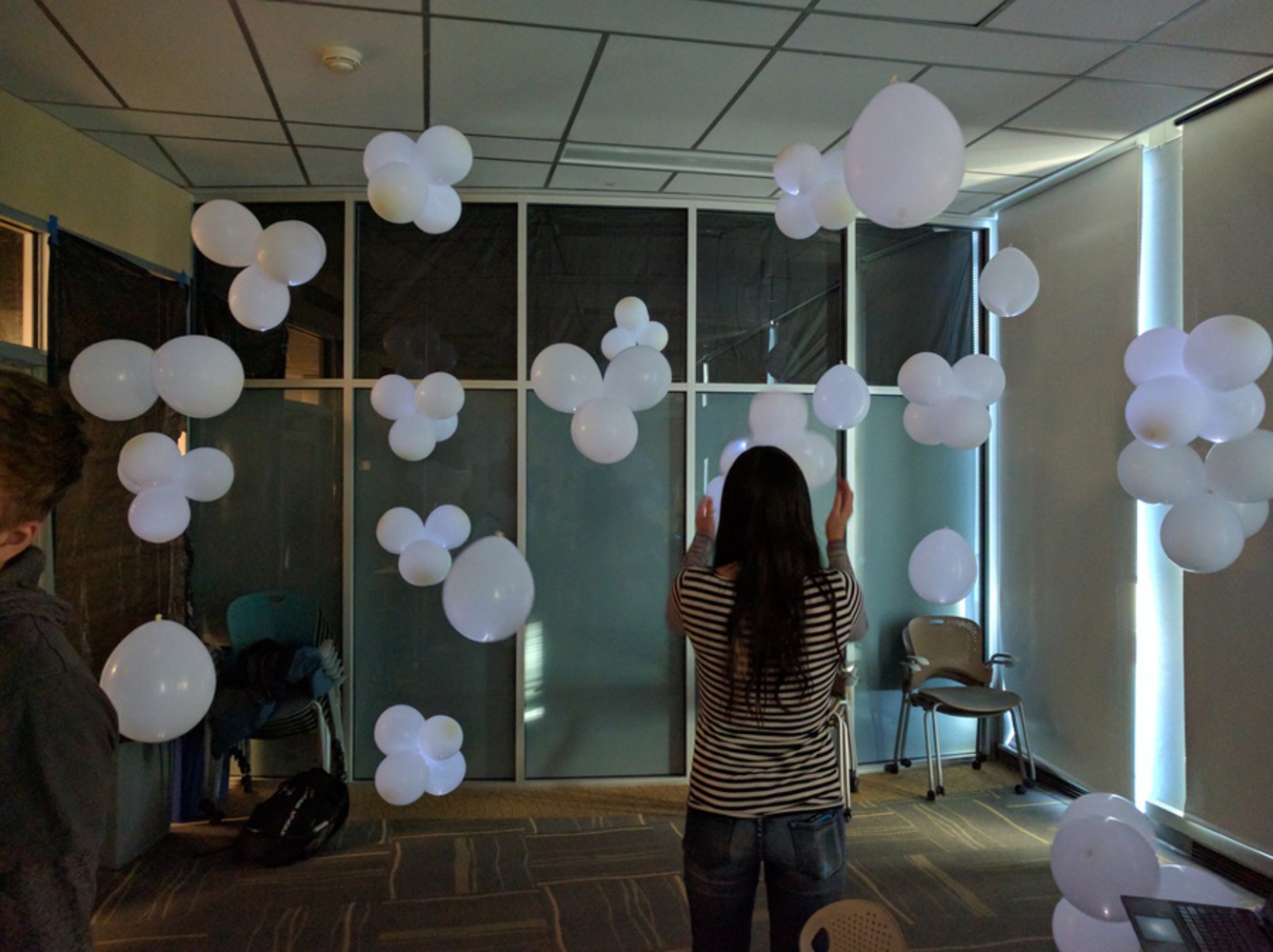 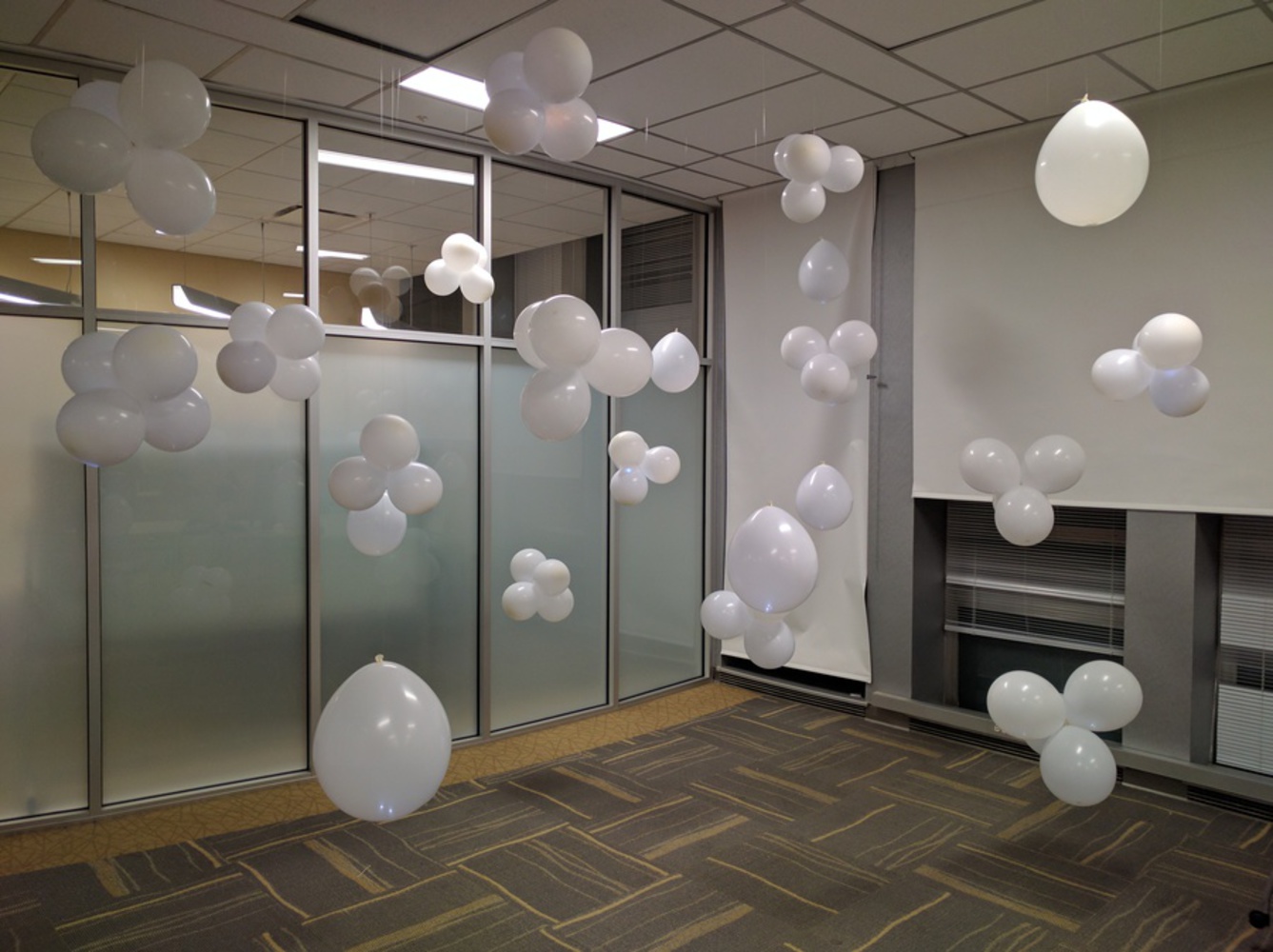 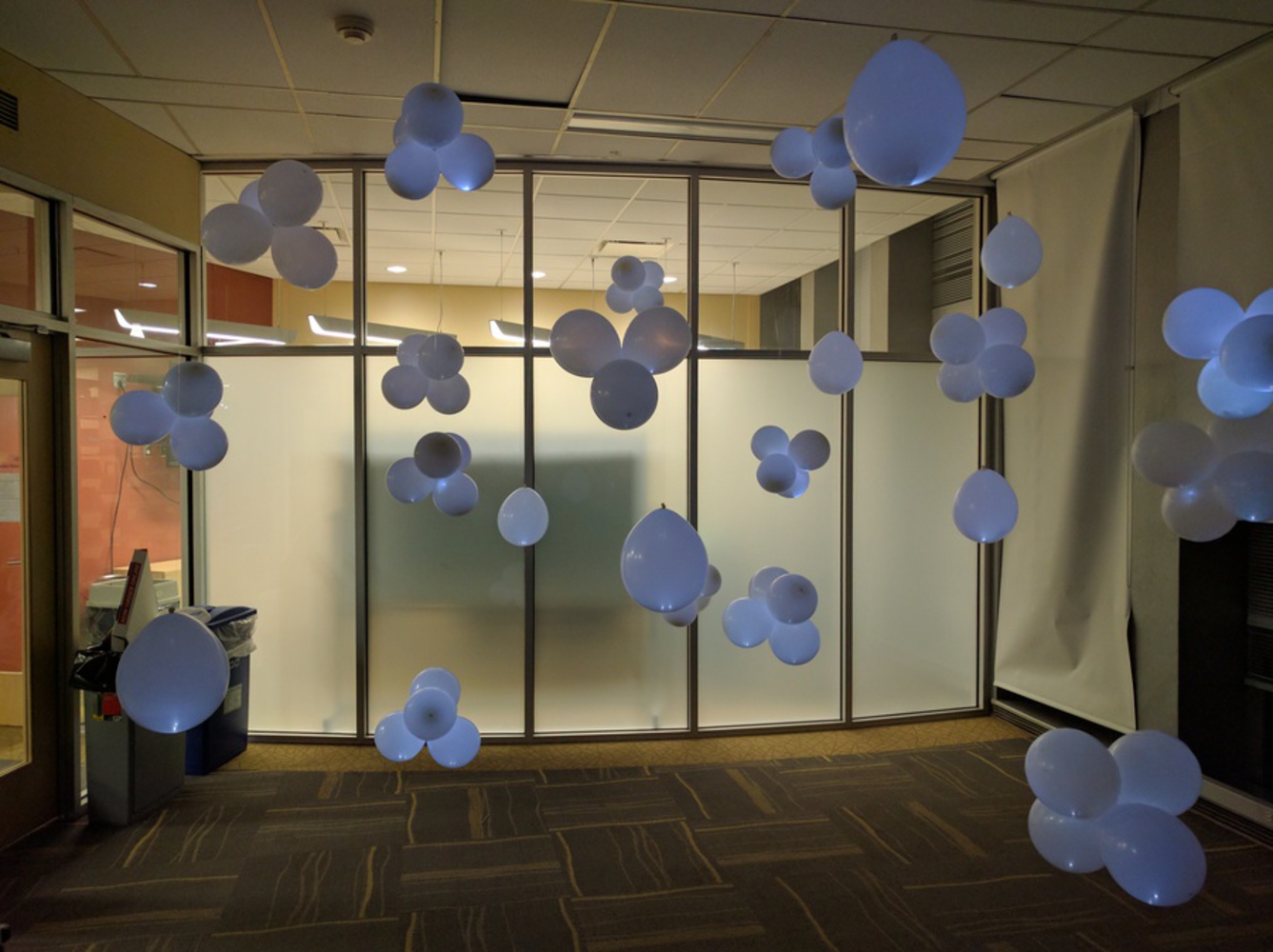 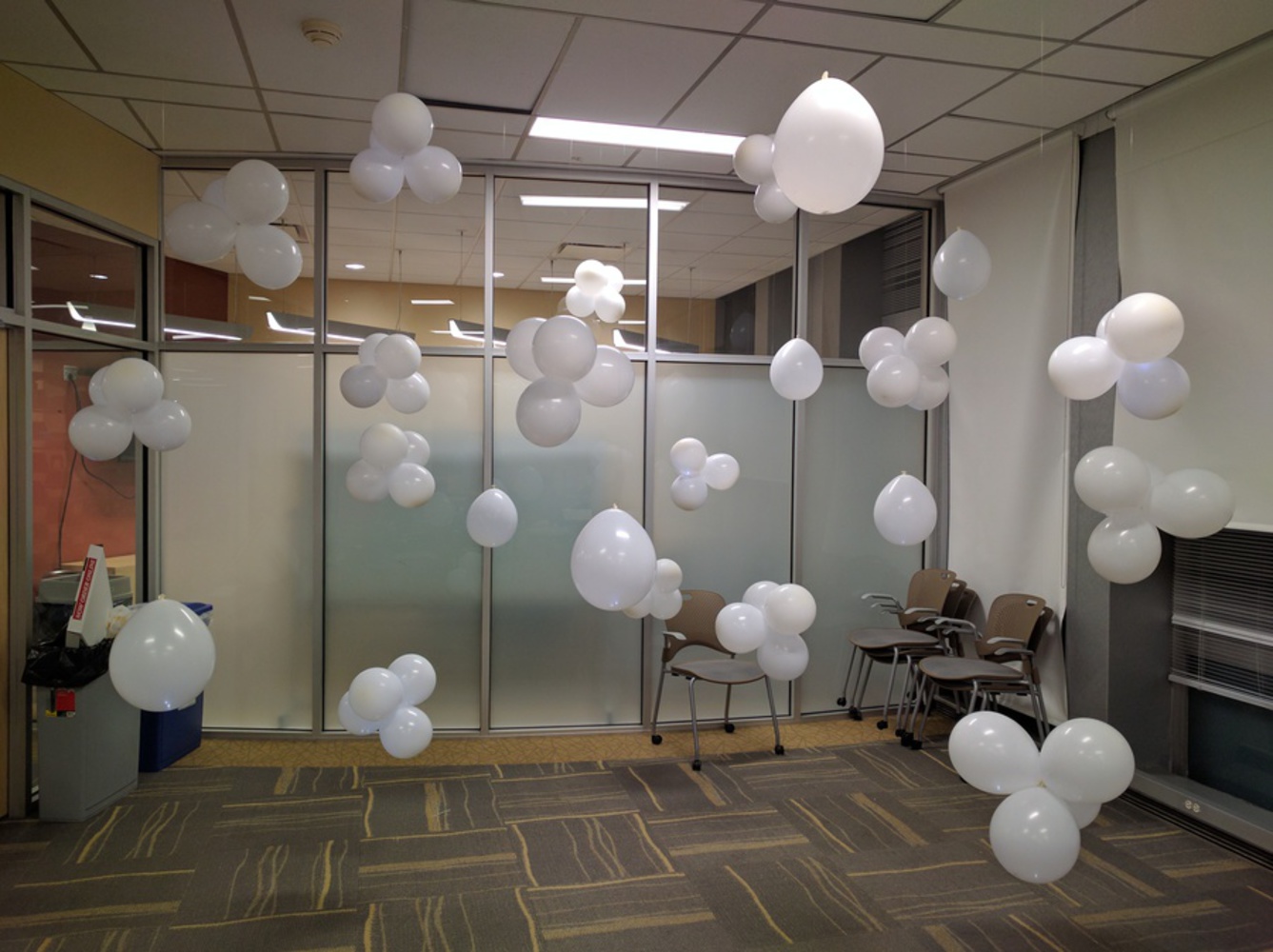 My main concern is in how much you are actually adapting the concept that you are "stealing." I feel that Remix is a fundamental part of this course, so I would advise finding some ways to further the concept. Definitely flesh out the concept of using objects of different shapes and sizes, or perhaps add sound as Kai suggested.

An environment that invites one to relax by playing with balloons filled with lights to create creative light shows.