The goal of this project is to monitor the reactions of people in my Facebook community when I post a profile photo that stands in stark contrast to other content uploaded of me.

A little context. When I normally change my profile photo, it's very intentional; I think about the photos I choose and spend a little time fixing lighting and cropping it so it's aesthetically pleasing. The results  are relatively well-composed representational photos of me  that often generate 150+ likes and stay on my profile for 6 months or so. These photos are always taken by other people and usually depict me doing some kind of activity.

Some profile photos from the past year: 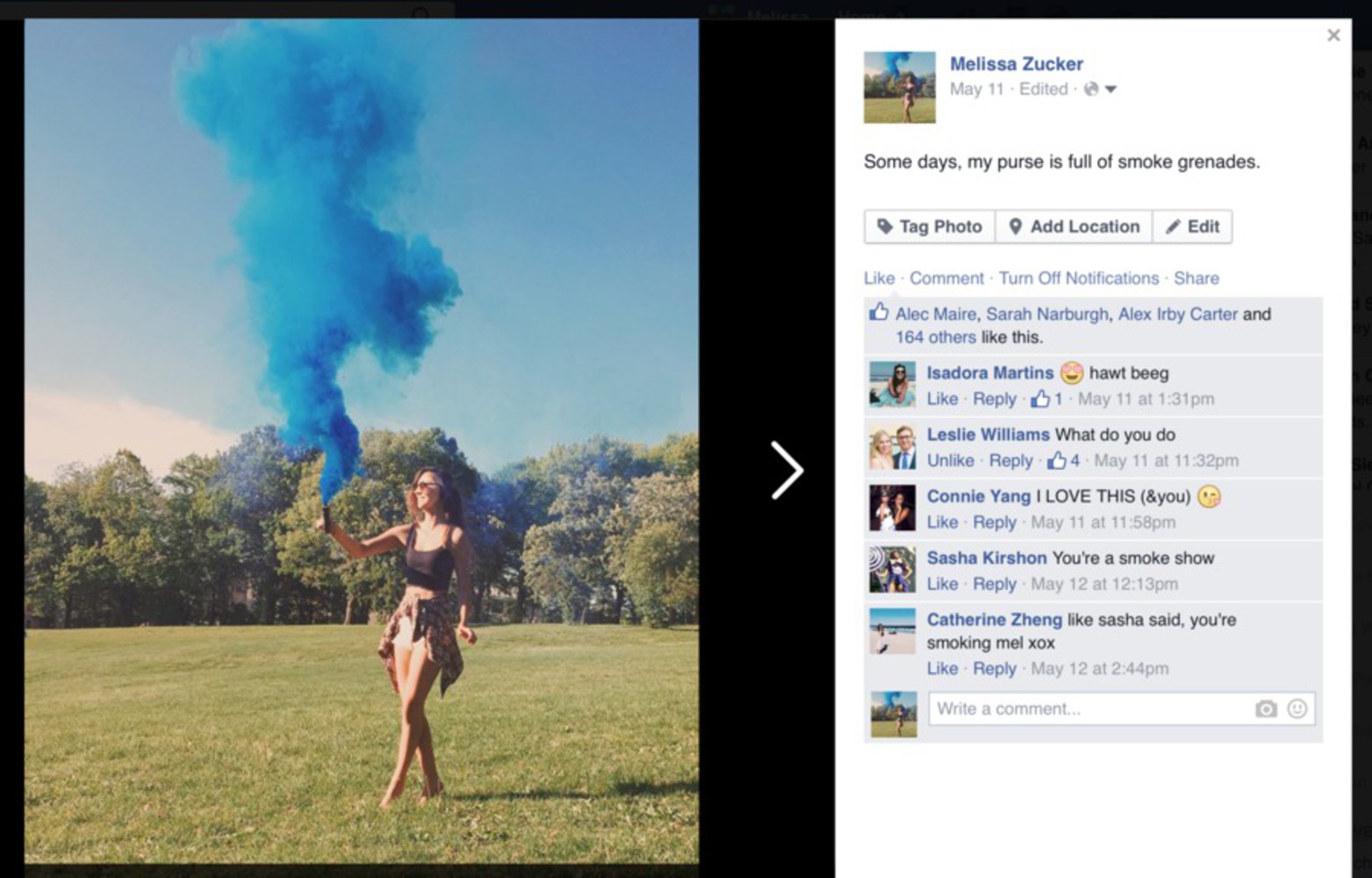 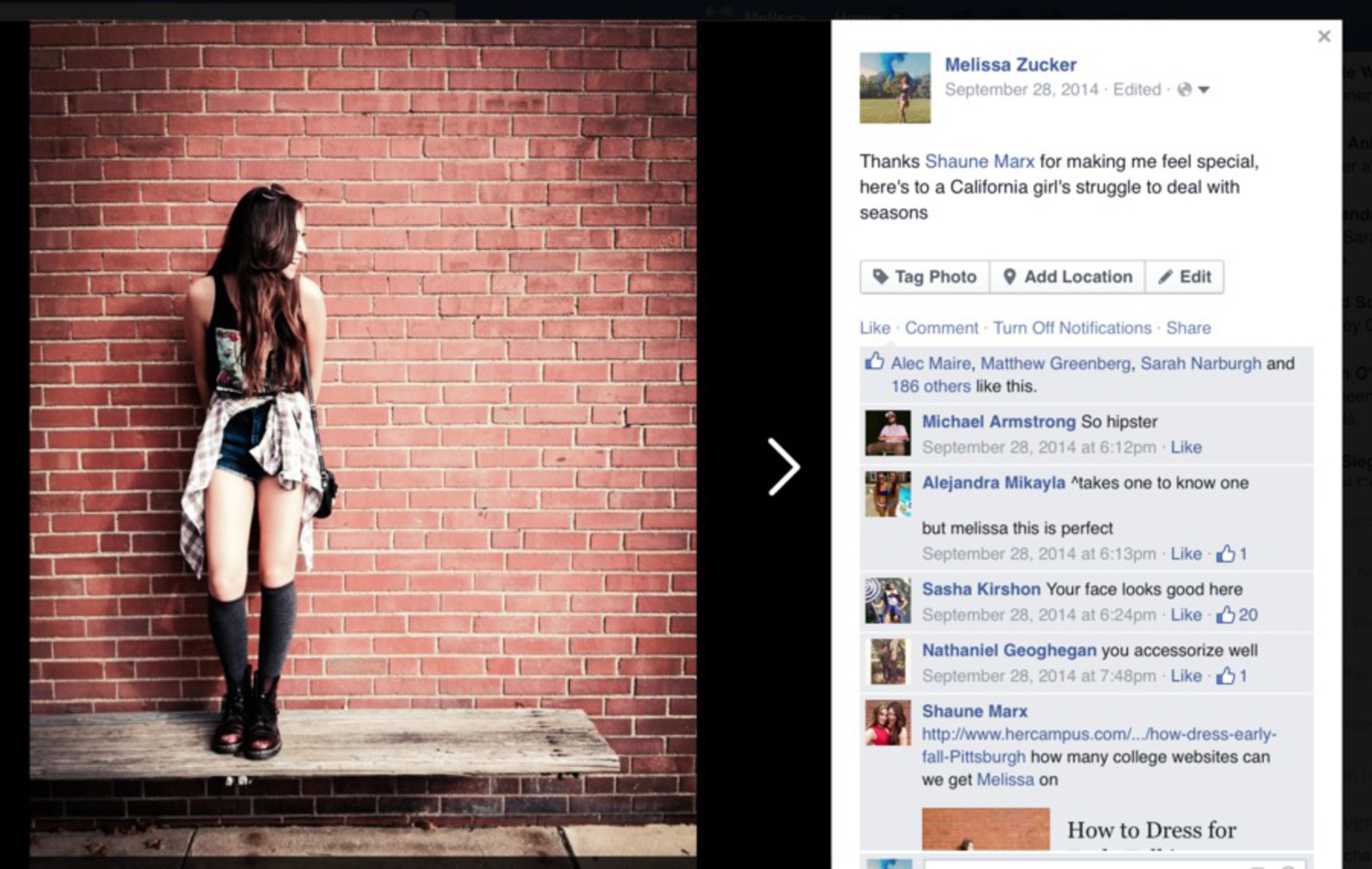 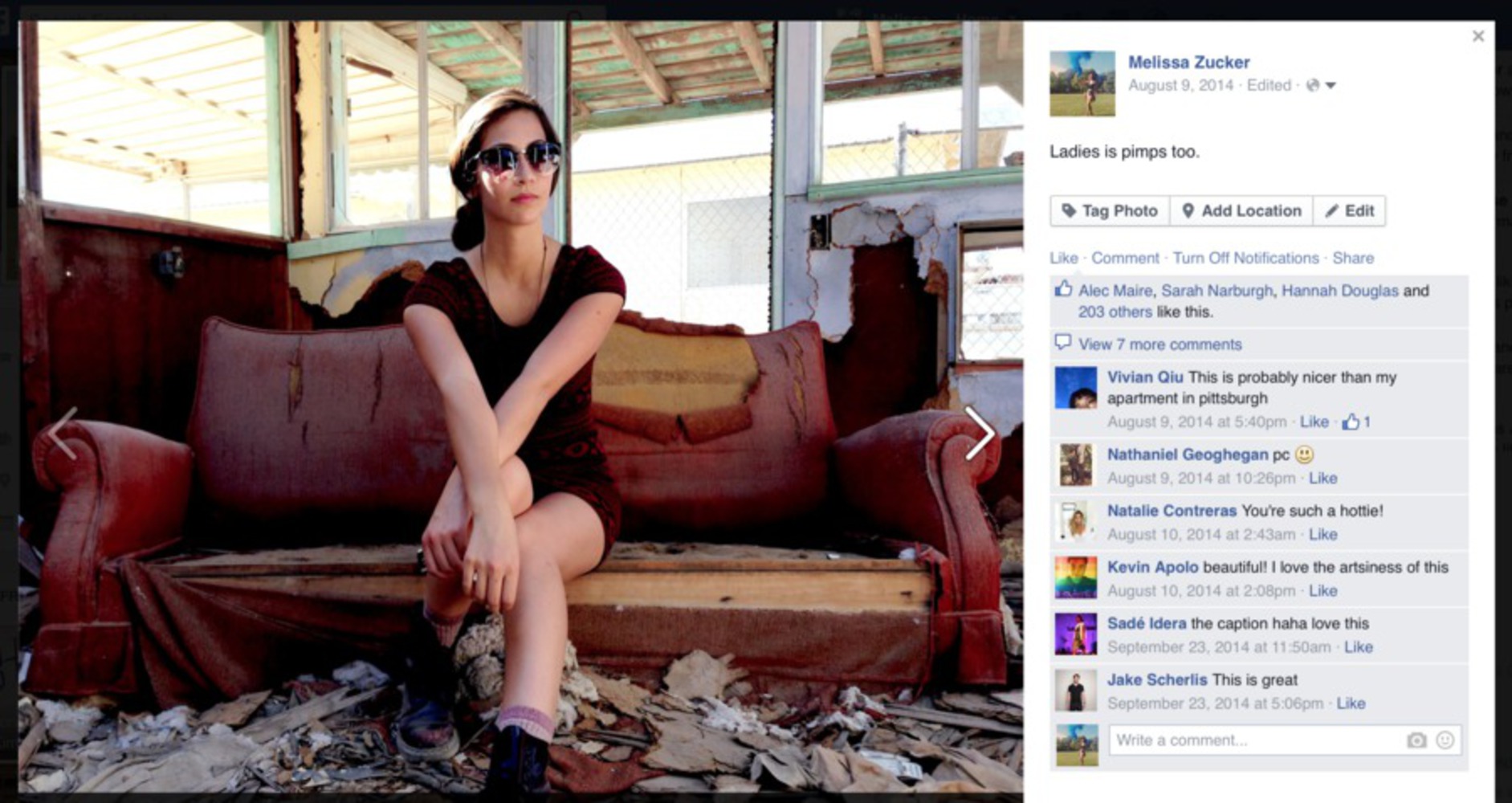 Because I usually post more "serious" photos, I thought this was a good opportunity to do something crazy and this weekend provided an interesting opportunity to do so. It being membership recruitment weekend for sororities (and me being in a sorority), this weekend the expectation was to dress up, wear heels, and be generally glamourous. Subsequently, a lot of people's newsfeeds that are involved with Greek life will be filled with photos of put-together glamorous women. My intent was to use this opportunity to make a profile photo that will starkly contrast the glamour by depicting me without make-up, sitting in a corner, and doing something entirely unlaldylike. The intent was to be humorous and possibly make my audience rethink the idea of a sorority woman by showing an authentic photo of nonconformity.

The first big decision I made was about timing; I wanted to post the new profile photo after a bunch of photos of me being put-together and dressed up had already been uploaded to Facebook. By timing it this way, my gremlin photo would be sandwiched between more typical photos to create the largest contrast possible. As for the taking of such a photo, I thought having someone else take it would make it look more authentic, like I was "caught in the act".

While I had this much planned, I didn't have a concrete idea of where the photo would be taken, but luckily I stumbled on a good opportunity. After night two of membership recruitment, our chapter had ordered pizzas (16 to be exact) to feed the masses of hungry, blistered sorority women. After changing out of my dress and heels and putting on a comfy outfit, I had a friend take a picture of me where I was surrounded by empty pizza boxes. 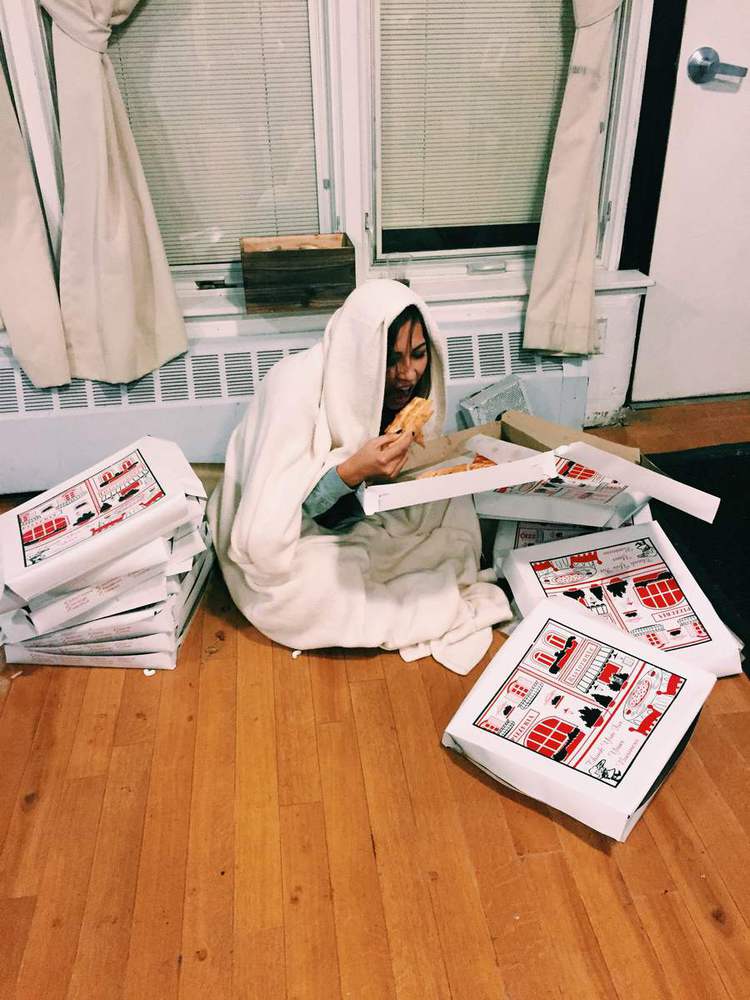 The product. A friend snapped this picture on my iPhone, and I fixed the lighting on it using an iPhone app as to make it look like it was posted intentionally and not like I had been "hacked". So overall, all it took was a smartphone, some empty pizza boxes, and wifi.

The photo was posted at 11:00 AM on Sunday and somewhat facetiously captioned "The real me". After 3 minutes, the photo had 16 likes. After an hour, the photo had over 100 likes and had been getting some comments. My favorite was one relating me to a commonly used Facebook sticker featuring Pusheen the Cat, a famous internet icon. The comment itself was also popular. 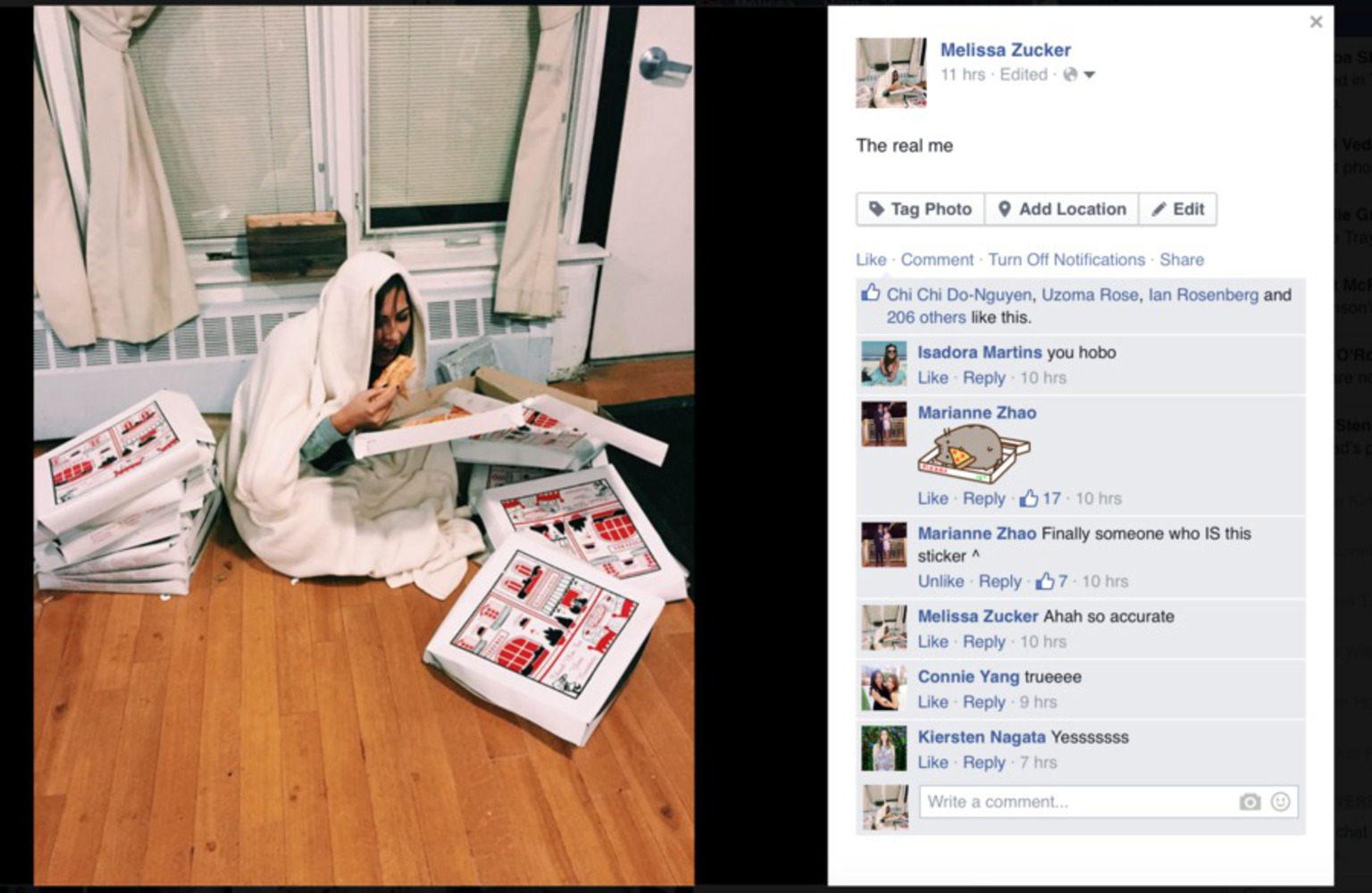 After nine hours, the photo had generated over 200 likes, which was completely unexpected. I had initially thought that the photo would make people confused and possibly uncomfortable and only get a handful of likes, but the picture was immensely popular. My family members and people from my hometown as well as my sorority sisters and college acquaintances liked the photo while the comments were limited to people I knew from college (with the exception of Kiersten, a family friend). This all went to make it my most liked profile photo EVER. Let that sink in a little. EVER.

What surprised me about the response (apart from how crazy popular the photo was) was that the effects of the photo seemed to be limited to Facebook, and that the reaction was visible only on the picture itself since no one sent me a Facebook message about it like in other people's projects. Despite having an overwhelming number of likes, only one person brought it up in conversation in person. I've seen this kind of thing a lot, however. It seems to me that people tend to only respond to social media with social media, and that the boundaries of social media and the real world are sometimes hard to transcend.

In my last project, I compiled a collection of Facebook profile pictures and attempted to find relationships between the amount of likes on it, and the content and style of the photo. This was a lofty goal, however, and I feel that I was unsuccessful in finding a relationship between the two.

Here again, I was baffled by the results of this experiment and struggled to make a conclusion about why specific content gets likes on Facebook. While I can't make conclusions about other profile photos, my Facebook community respond positively to the stark contrast I sought to create, rather than being put-off by it. They appreciated the caricatured "realness" of the situation it depicted and bought in to the idea that sorority women don't always wear big hairdos and expensive Lily Pulitzer handbags. I also think the content of the photo itself resonated with the audience. I mean, who doesn't like to get cozy in a blanket and eat pizza?

All in all, what I learned from this was that people on social media respond to humor and realness in a photo as positively as they respond to staged, intentionally aesthetic photos. However, if I would repeat this project again, I would be curious to see how my Facebook audience would respond to a photo that did not depict me at all in it, since this is something I have never done before.

It's still my current profile photo and will most likely remain on my profile for some time.

Haha this was a really interesting contrast to your usual beautifully composed photos. It was humorous and I think it was really cool how you actually made that your profile picture compared to your others. I'm surprised it actually became the most liked and I liked how you were specific about the time you posted it as well as how it was only mentioned once aside from social media. The time one posts an image does in fact play a part in how quickly it generates interest--you definitely seem to have gotten it! :) Great pics btw

The goal of this project is to monitor the reactions of people in my Facebook community when I post a profile photo that stands in stark contrast to other content uploaded of me.