We created a system in which expert skills of a Chinese calligrapher are transferred to a beginner through computer augmentation, allowing beginners to creatively compose calligraphy pieces without the otherwise necessary expertise. 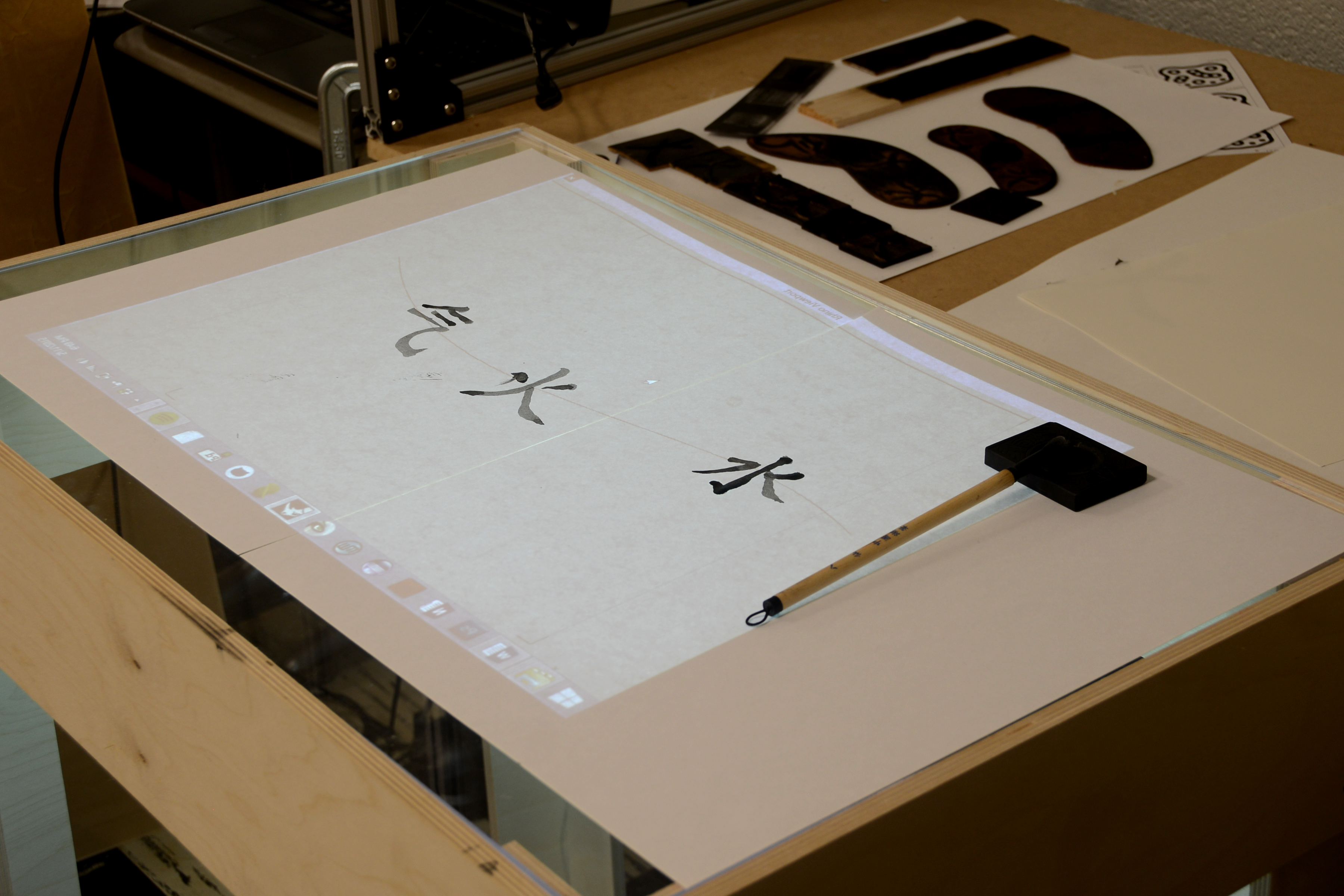 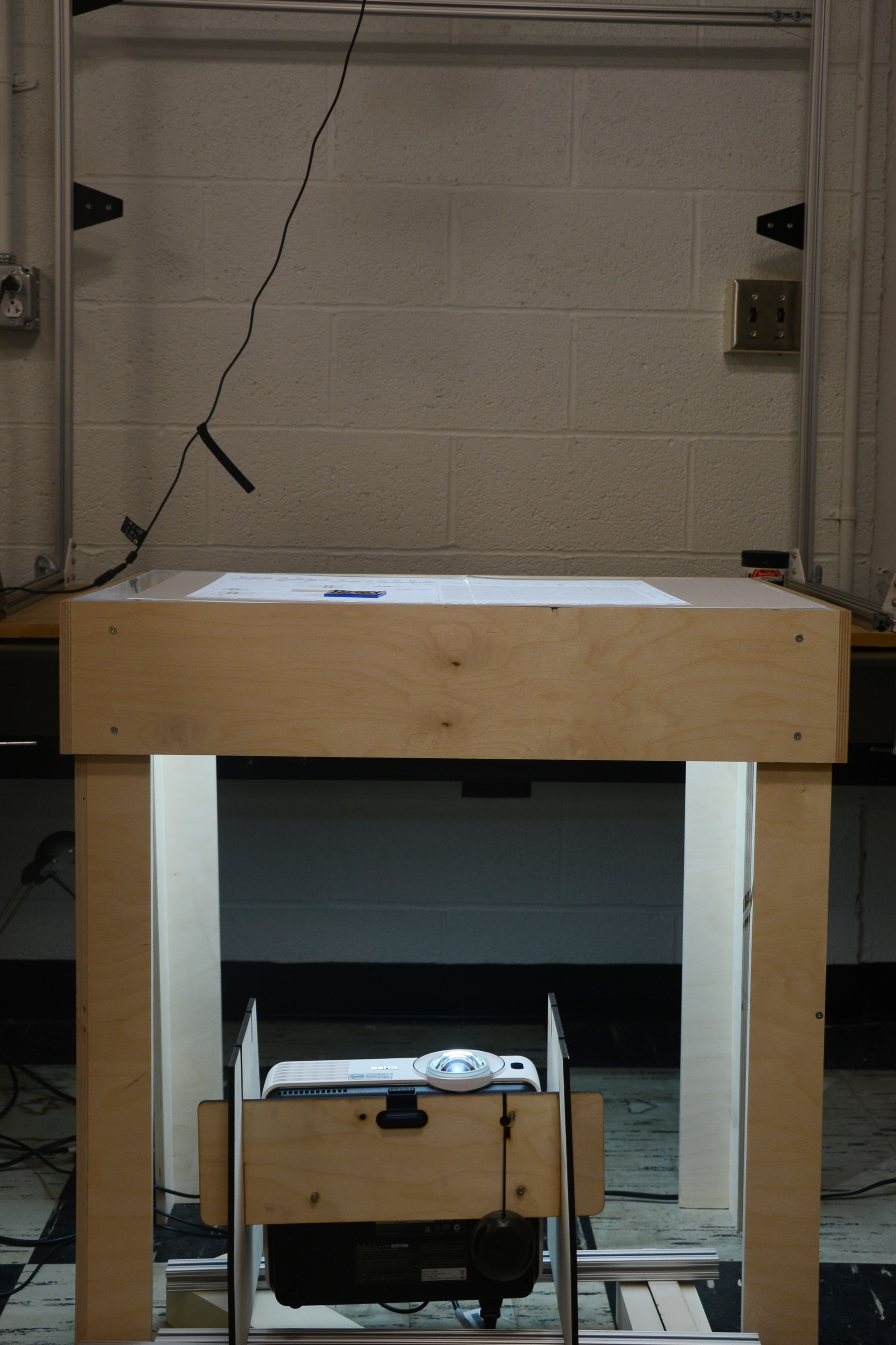 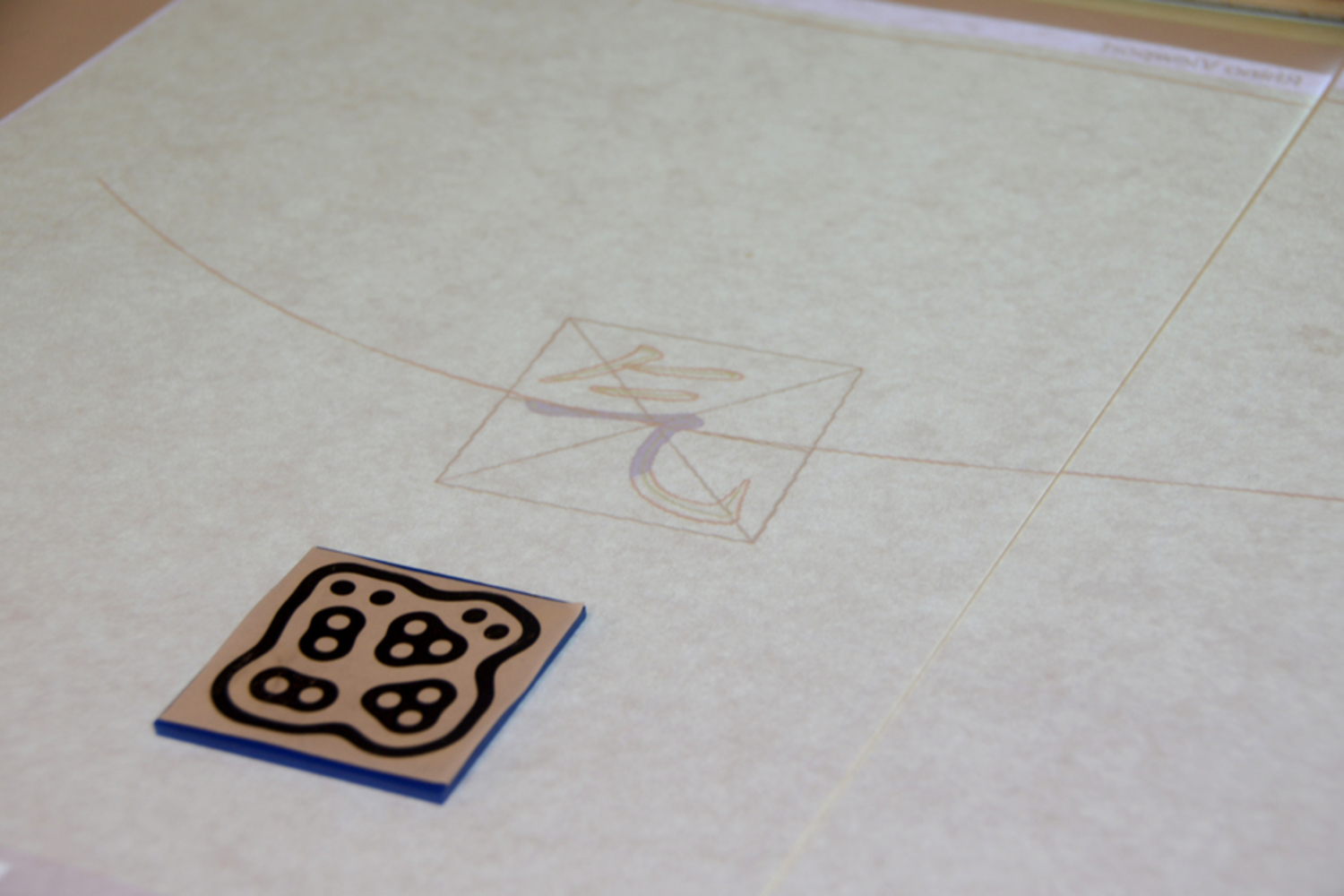 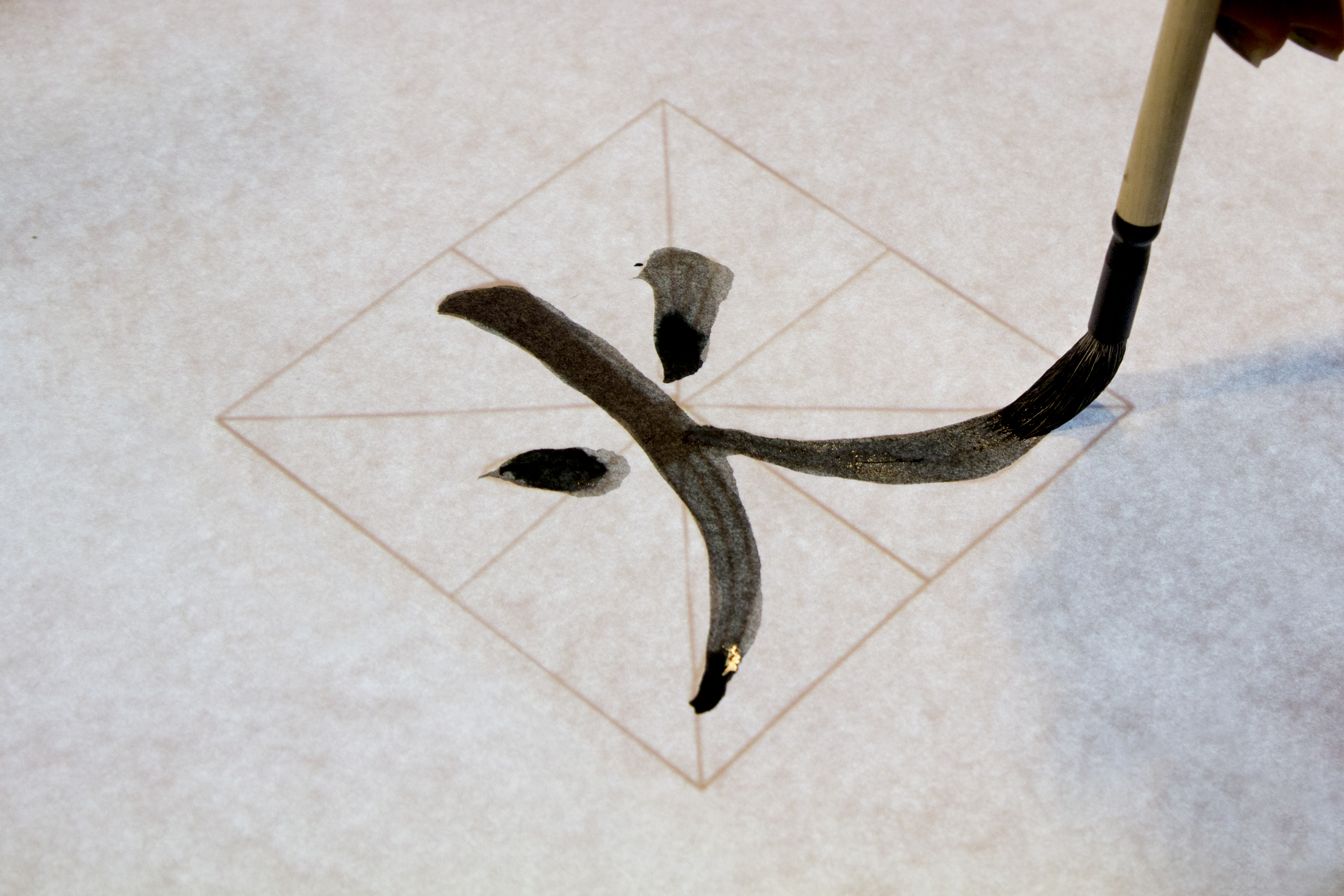 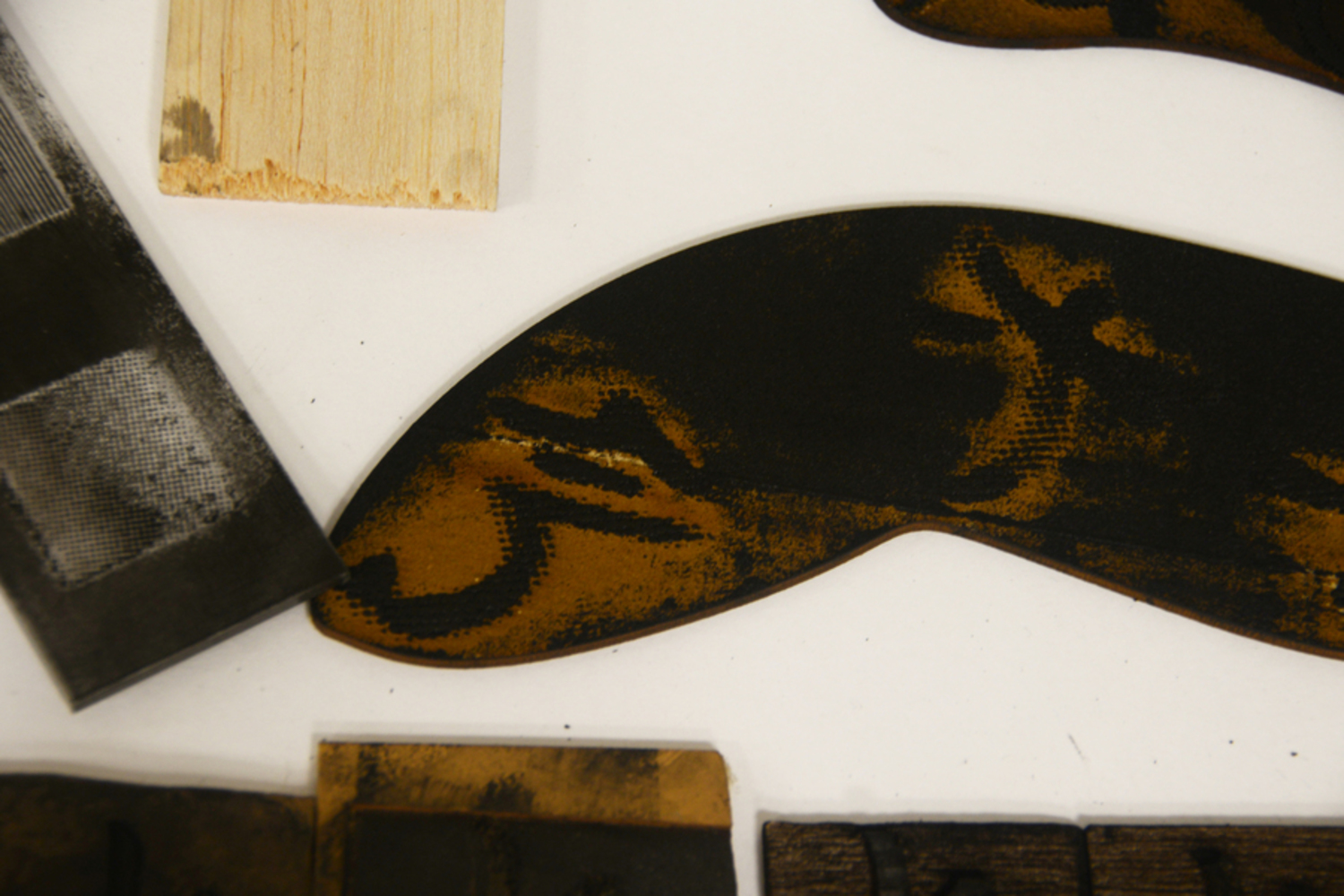 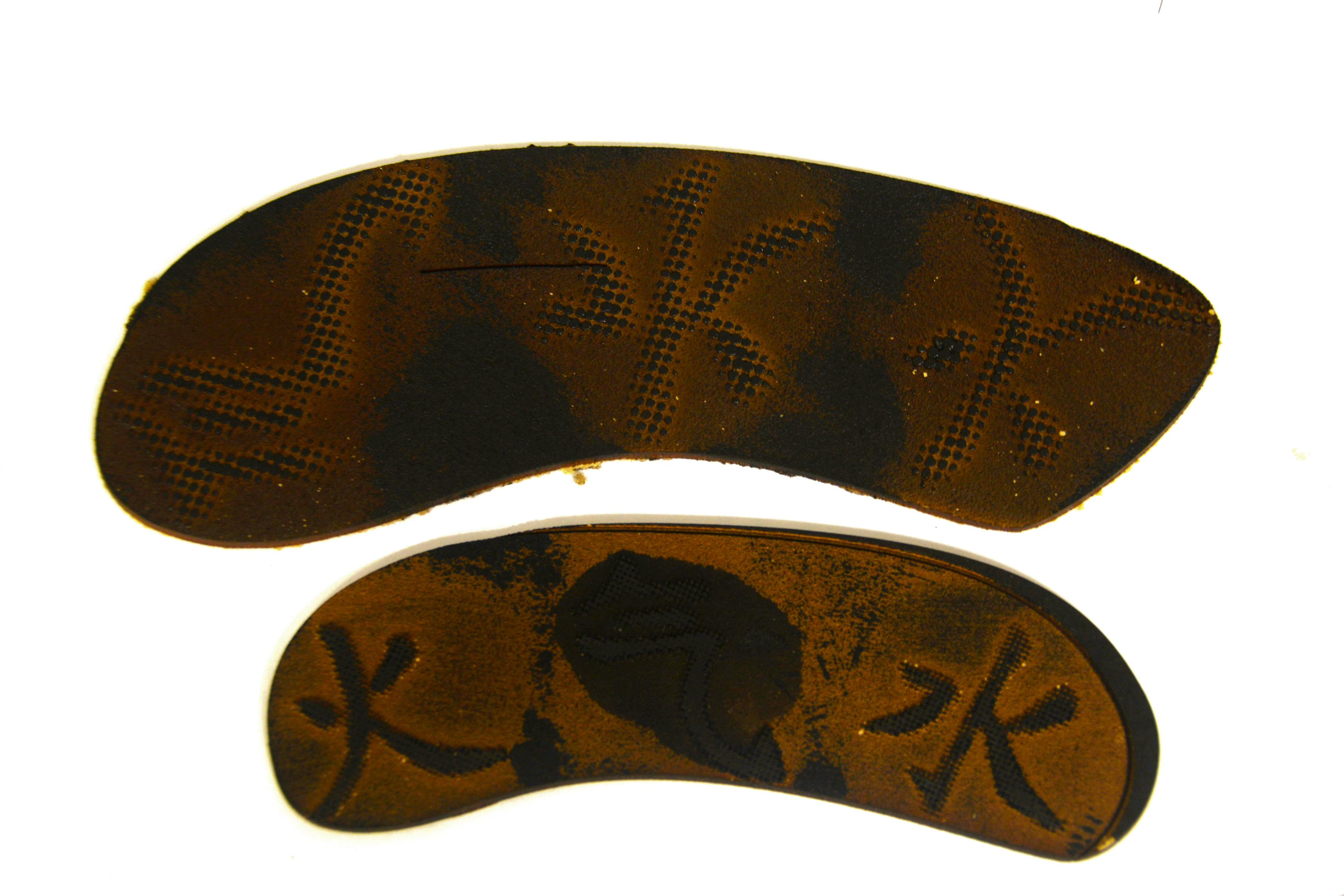 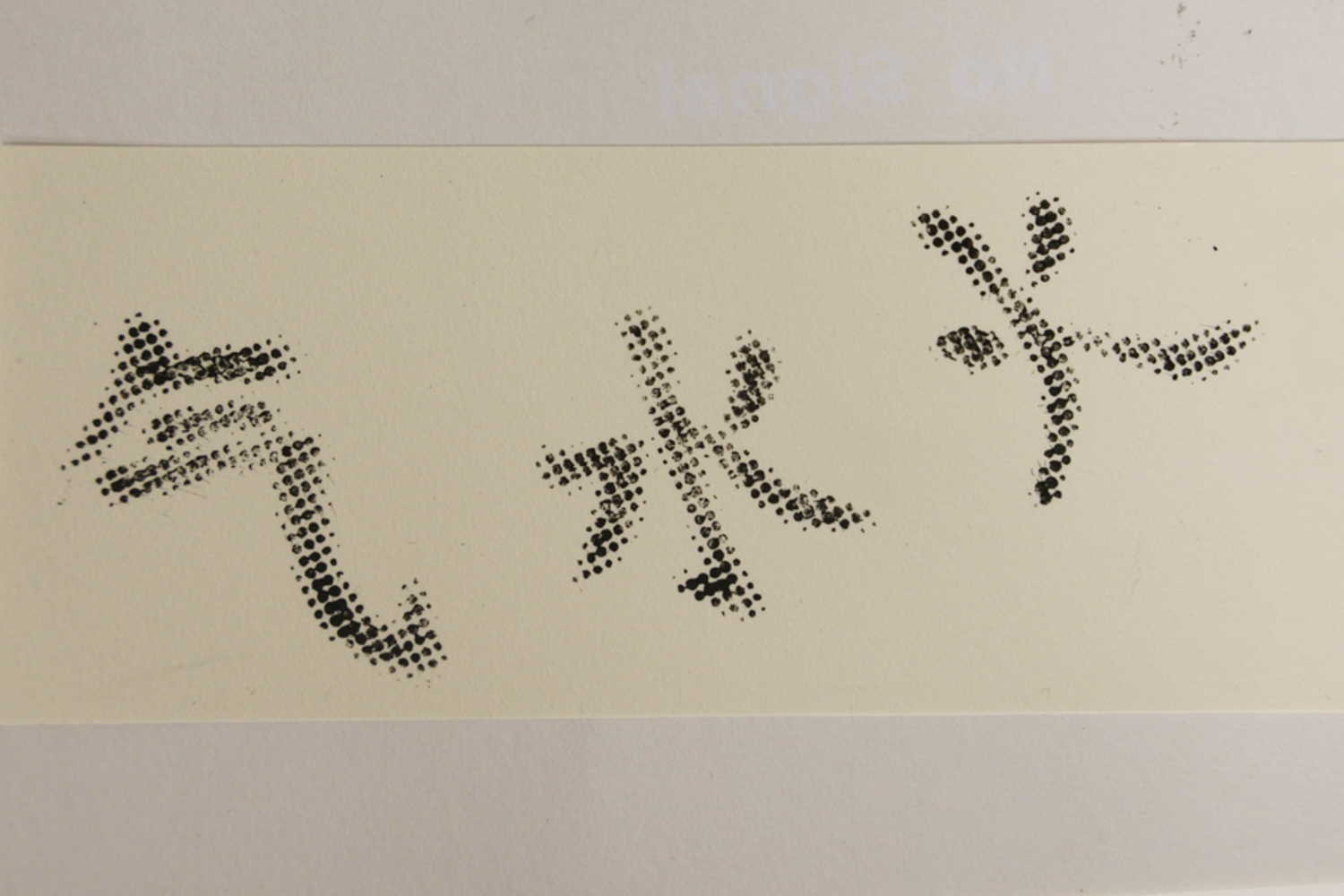 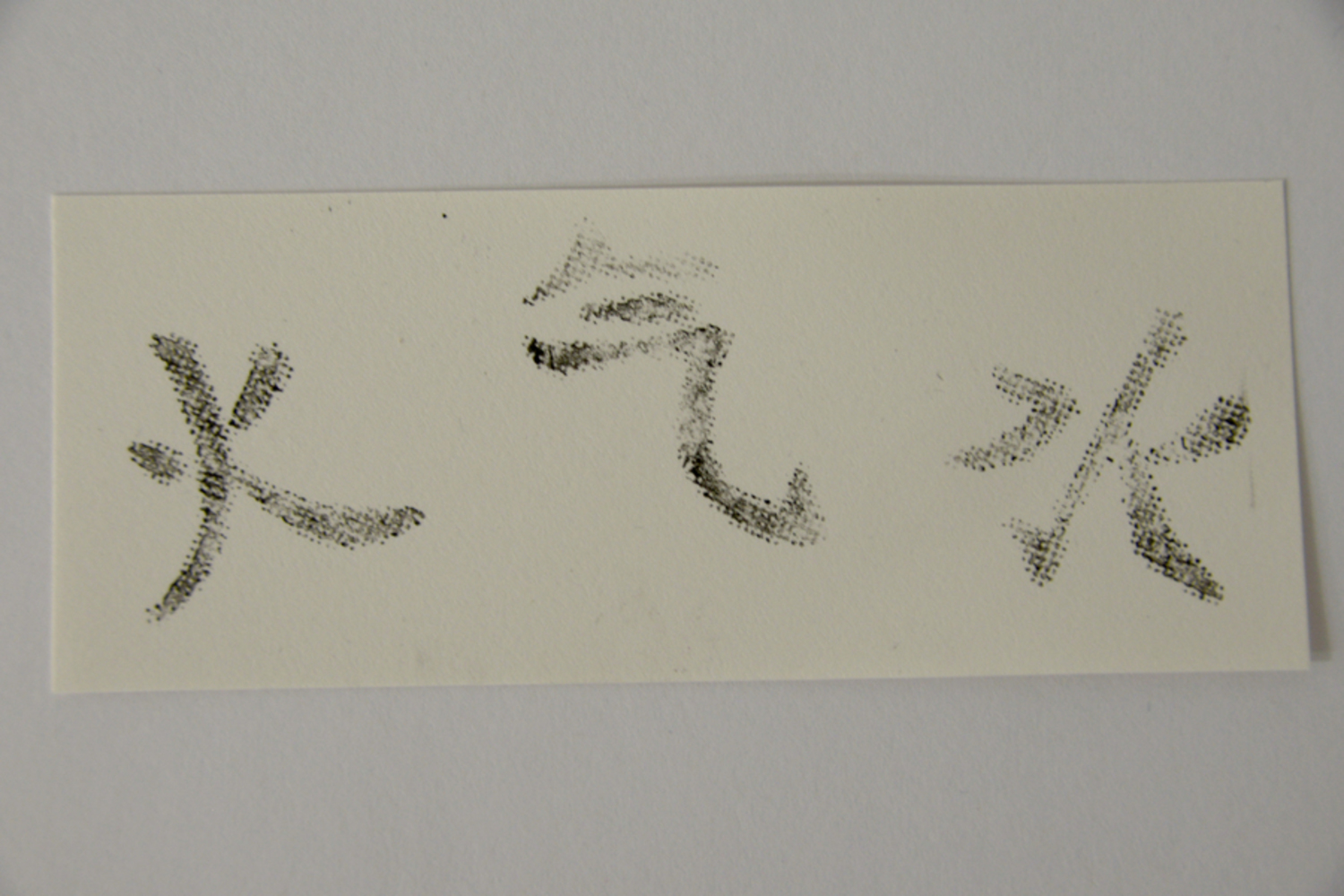 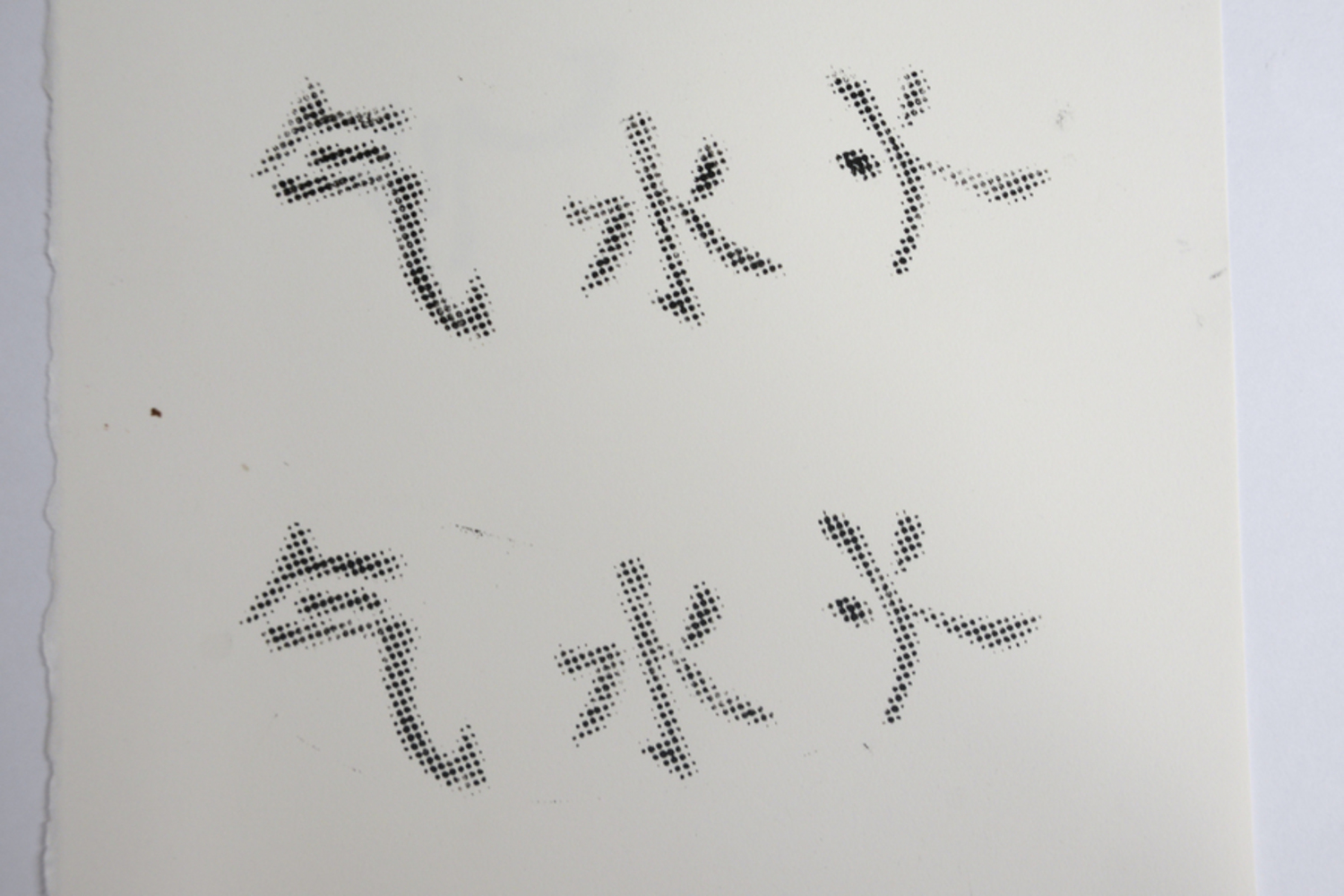 Calligraphy is a complicated art form that has been perfected and expanded upon for over hundreds of years. Expertise are included in the hand position around the brush, the rhythm of stroke making, the calculated grid that each Chinese character follows, the pressure of the brush, the order of the strokes, while all maintaining a creative interpretation. Calligraphy is a beautiful combination of practiced skill and self expression. For this project, we created a tool that augments the creativity of the beginner calligrapher. This system gives the expert skill of composition to anyone.

This version tries to create the most simplistic UI so that the user can focus on learning calligraphy while also creating artistic compositions. In addition, it allows the user to follow a previously drawn guideline to create a guided, precise, composition. This composition is then transposed onto a hardboard stamp, in halftone, which can then be used to print on multiple surfaces. In this way, the beginner calligrapher is allowed the opportunity to learn appropriate calligraphy, create his own composition, and recreate it with another medium. This system utilizes a calligraphy brush with three different markers, each representing different characters in Chinese (wind, fire, water), ink, a locking mechanism, a projector, a specially made table, and a camera. We use built in grasshopper pieces and our own Iron python scripts.

Vivian, one of the three members of the group, has studied calligraphy for years and is fairly adept at it. She explained that normally a beginner has to work directly in a book on set grids because the brushstrokes one has to make are very precise. An expert can artistically design a composition for his/her characters on the page. We decided to work on giving that capability to a beginner. This tool allows anyone to learn calligraphy at the same time as making a personalized artifact, giving way to creativity throughout the user's learning experience. This project is a tool that frees beginners from the constructed grid and allows them to creatively compose their calligraphy pieces. We then decided to further augment the user's experience by allowing the user to freehand draw a line that they'd like their composition of characters to follow, then by moving each of the markers along the paper, the gridded guide snaps to the closest point on the line from the marker.

The animation instructs the user on the speed at which to move the brush, the pressure with which to press onto the paper, and most importantly, the order in which the strokes should be made. Each bursh stroke of the character is broken down and shown twice so the user can watch it once and then preform the action accordingly. This chronological guide for the strokes should, over time, give the user an intuitive sense for the ordering of strokes for new characters that he/she has never encountered. The character being shown here is the Chinese character for "Fire"

The table was fabricated with an acrylic surface, allowing the user to see projections from below, that will guide and instruct basic elements of calligraphy. If projected from above, the hand of the user would block the informative projection. The paper rested on the acrylic blocks any glaring light in the user's eye, preventing any misguided light that may hinder the calligraphy process.

The animation shows the brush stroke slowly being created, the grid to work within, the outer edges to stay within, and the customary inner line which is included in all workbooks. These guided lines are crucial in learning basic stroke-work in calligraphy; they follow a certain path that allows the user to create the varying thicknesses and ends we see in all Chinese calligraphy. We began by explaining to the user how they must hold the brush. Once the user knows how to progress, he/she can freely compose his characters with the given markers along a chosen line.

In Chinese calligraphy one must hold the brush straight up, perpendicular to the drawing surface. We had to explain this to each viewer. In further iterations, we would like to have the mounted camera recognize and correct when the user exhibits improper hand position. We had to work with the physicality of how the inked brush reacted on the paper verses the way in which we expected it to. We wanted people to put more pressure when the animation became thicker but they would often instead just do multiple strokes.

Our grasshopper file contains multiple sections. The top video row is how the program senses where the calligraphy brush is and where the grid should go. The bottom video row if the system for locking the grid. If the marker is placed farther on the table the grid locks in place and the animation starts.

The grasshopper program tracks and identifies Reactivision markers, an open-source computer vision framework similar to QR codes. The program chooses a character based on which marker is placed on the tabletop and orients it along a drawn contour at the point closest to the marker. 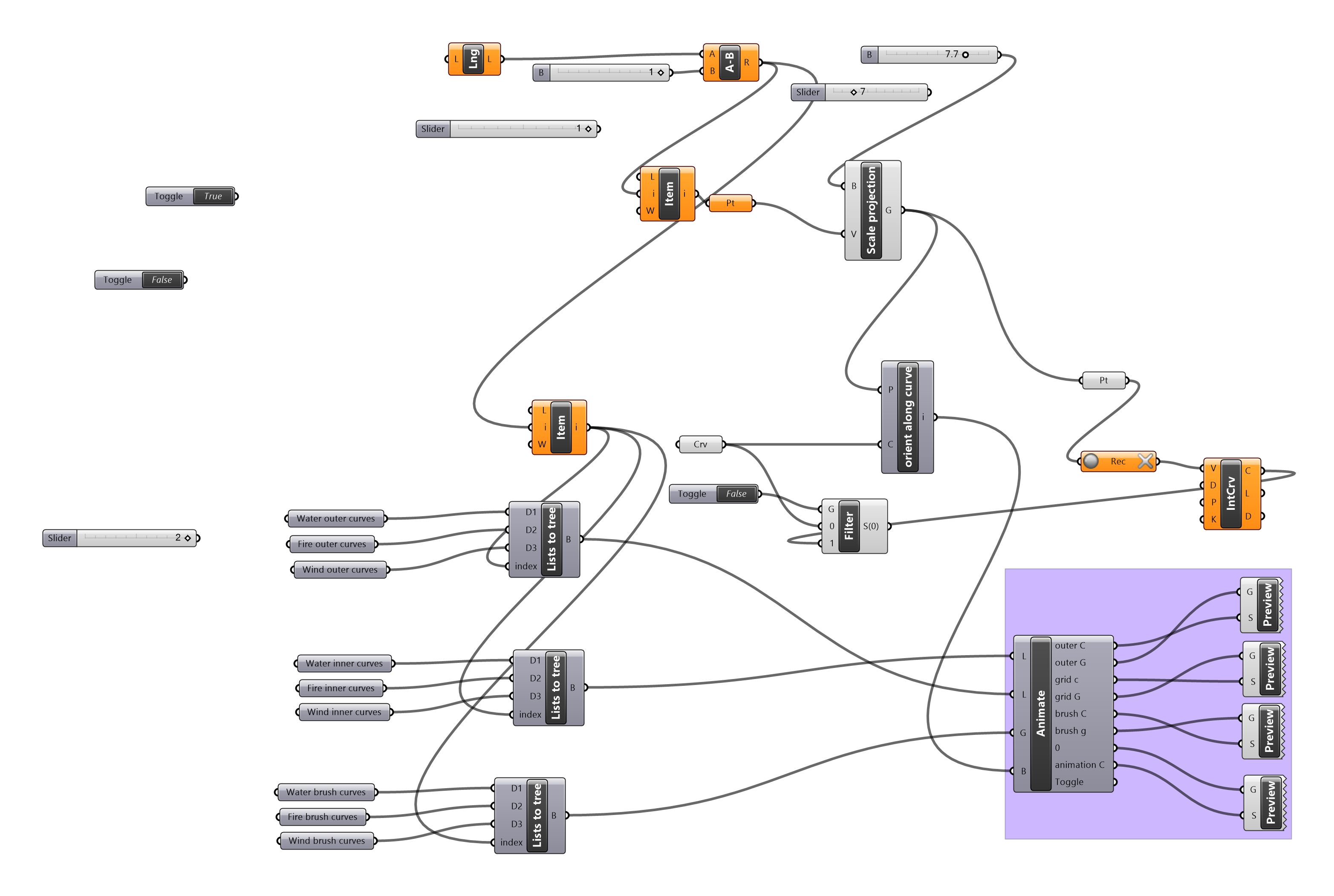 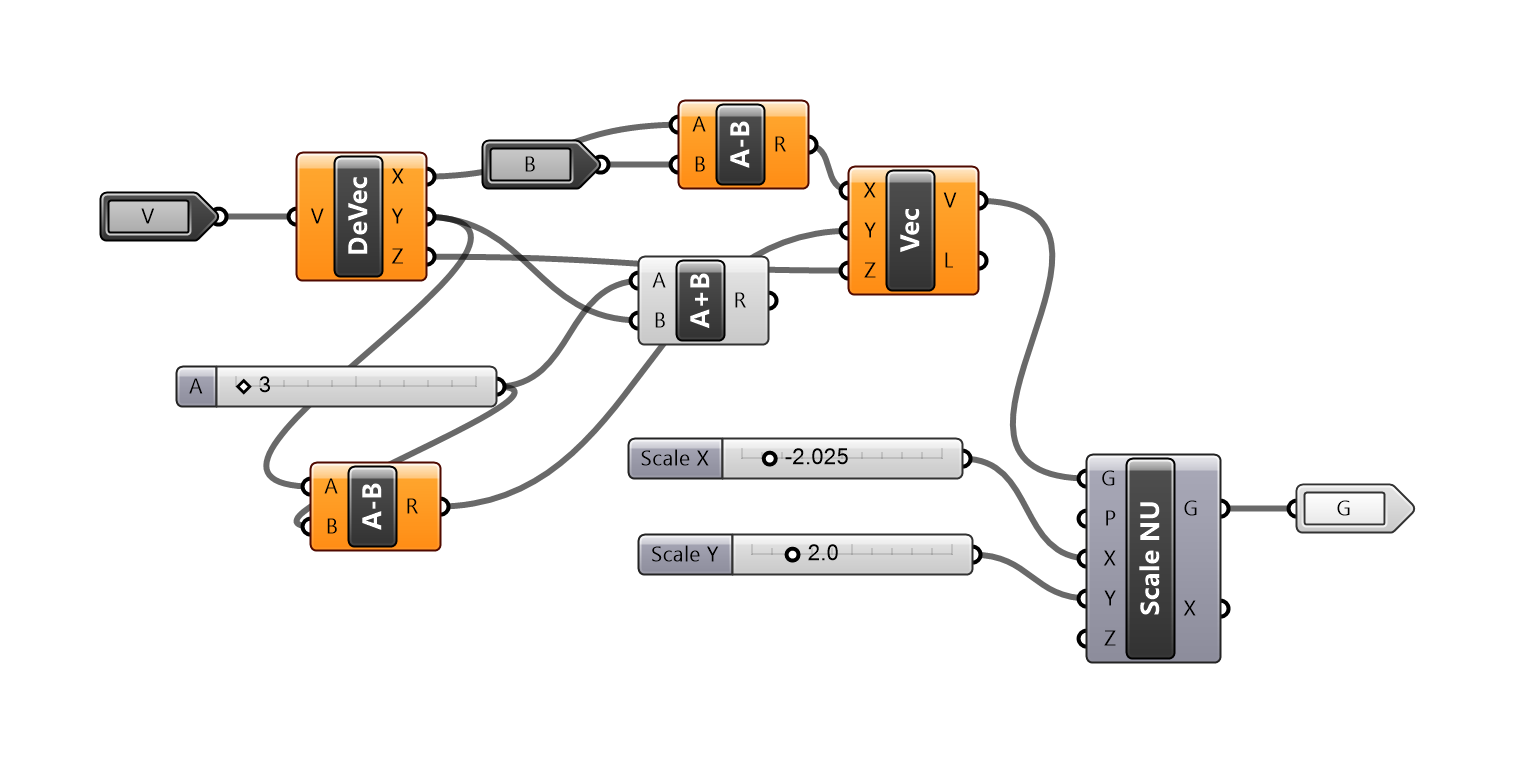 The above five images show the GH sketch of our project. The top one shows the overall view. The next 4 are areas called clusters which helped us organize the sketch into a format that is easier to read and debug. In order, from top to bottom, the zoomed in sections allow for projection, technically enable the letter to follow the drawn line, animate the letter, and format the lists of information into a usable form.

We created a system in which expert skills of a Chinese calligrapher are transferred to a beginner through computer augmentation, allowing beginners to creatively compose calligraphy pieces without the otherwise necessary expertise.