Made by Joyce Chen

A digital reproduction of Oskar Schlemmer's "Bauhaus Stairway", with a focus on the rising political regime at the time

Artist - Oskar Schlemmer was a German artist most known for his work at the Bauhaus art school. The Bauhaus school was famous for its combination of crafts and fine arts, and Schlemmer especially focused most of his work in the Bauhaus theatre and sculpture workshops. His experiences in sculpture especially were often reflected by the very geometrically-shaped human characters in his works (For example, http://www.myartprints.co.uk/kunst/oskar_schlemmer/thm_gruppe-am-gelaender.jpg and https://upload.wikimedia.org/wikipedia/commons/thumb/a/a4/1932_Schlemmer_Treppenszene_anagoria.JPG/800px-1932_Schlemmer_Treppenszene_anagoria.JPG)

His work rejected pure abstraction, instead holding onto a sense of the physical human. Schlemmer tended to draw attention to human figures - typically stylised, faceless characters - in his paintings, and he even developed a class at Bauhaus focused on “Der Mensch (The Human Being)”.

Work - The work I selected was an oil painting Schlemmer finished in 1932, titled “Bauhaustreppe (Bauhaus Stairway)”.

I originally selected the work because of its seeming normalcy. It appeared to be a very typical scene - a group of people walking up a staircase - with the only strange point being the dance-like form of the figure at the top of the stairs. The painting appears very ordered - the staircase and the grid in the background provide very easy lines to follow, and the figures are all of the same shape and size. The colors are bright and vibrant, seeming to reflect happier times and experiences.

Approach - I wanted to keep the idea of human figures walking up a staircase, but I changed the background and the figure at the top to reflect the political context in which Schlemmer created the work. Schlemmer painted his original work in 1932, when Hitler was gaining power, and the Nazis began persecuting Schlemmer and other German artists not long after. I took the more optimistic, peaceful attitude shown in the original painting and turned it into a darker setting, as well as focusing on the 3 largest figures climbing the staircase.

Product - I used Photoshop to put together the staircase, background, and human figures. To keep the geometric modularity of Schlemmer’s original work, I edited pictures of the small wooden human models often used in making physical art. I also tried to maintain the grid-like background of Schlemmer’s work by setting a subtle grid pattern in the back of my reproduction.

Reflection - My work turned out very different from Schlemmer’s. Going into the project, I knew that I wanted to change the figure at the top of the staircase. I decided to use the Nazi symbol and modify the original tone of the work - rather than focusing on good memories and experiences from the Bauhaus school, my work turns more attention towards the rising political regime in a darker setting. In my recreation it can be perceived that the characters are physically moving towards the Nazi regime, but without the cheerful background of the Bauhaus school in the background. If I were to do this again, I would try to keep it more accurate to Schlemmer’s original thoughts - rather than changing the overall tone to political and frightful, I would have tried to keep a more positive focus on the study of arts. 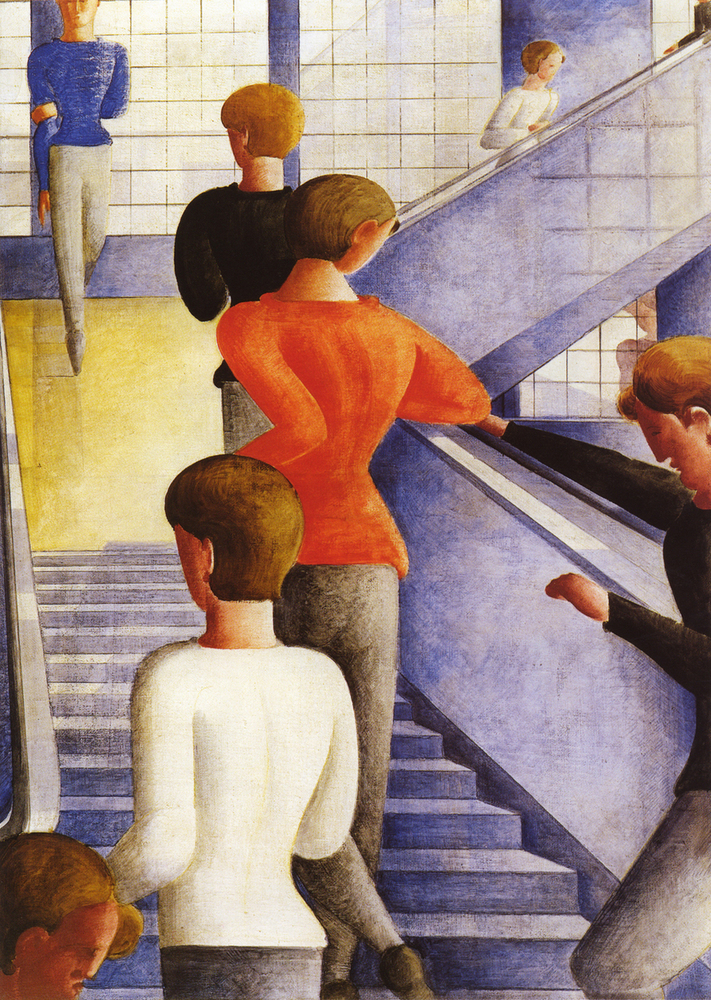 Really interesting re-interpretation of the original work. The research and process are thorough, and your reflection is in depth and informed by the process and product.

A digital reproduction of Oskar Schlemmer's "Bauhaus Stairway", with a focus on the rising political regime at the time