To gather and analyze the profile pictures on a social media platform.

I can honestly say I haven’t really thought too much about profile pics before. The most its ever been on my mind is when I’m looking someone up on Facebook, and I’m frustrated because their picture’s in bad lighting, or from behind, or has multiple people who could all be the person I’m looking for, or its not even a picture of a human being. Going into this project, I really wasn’t sure what I’d learn from analyzing profile pics. 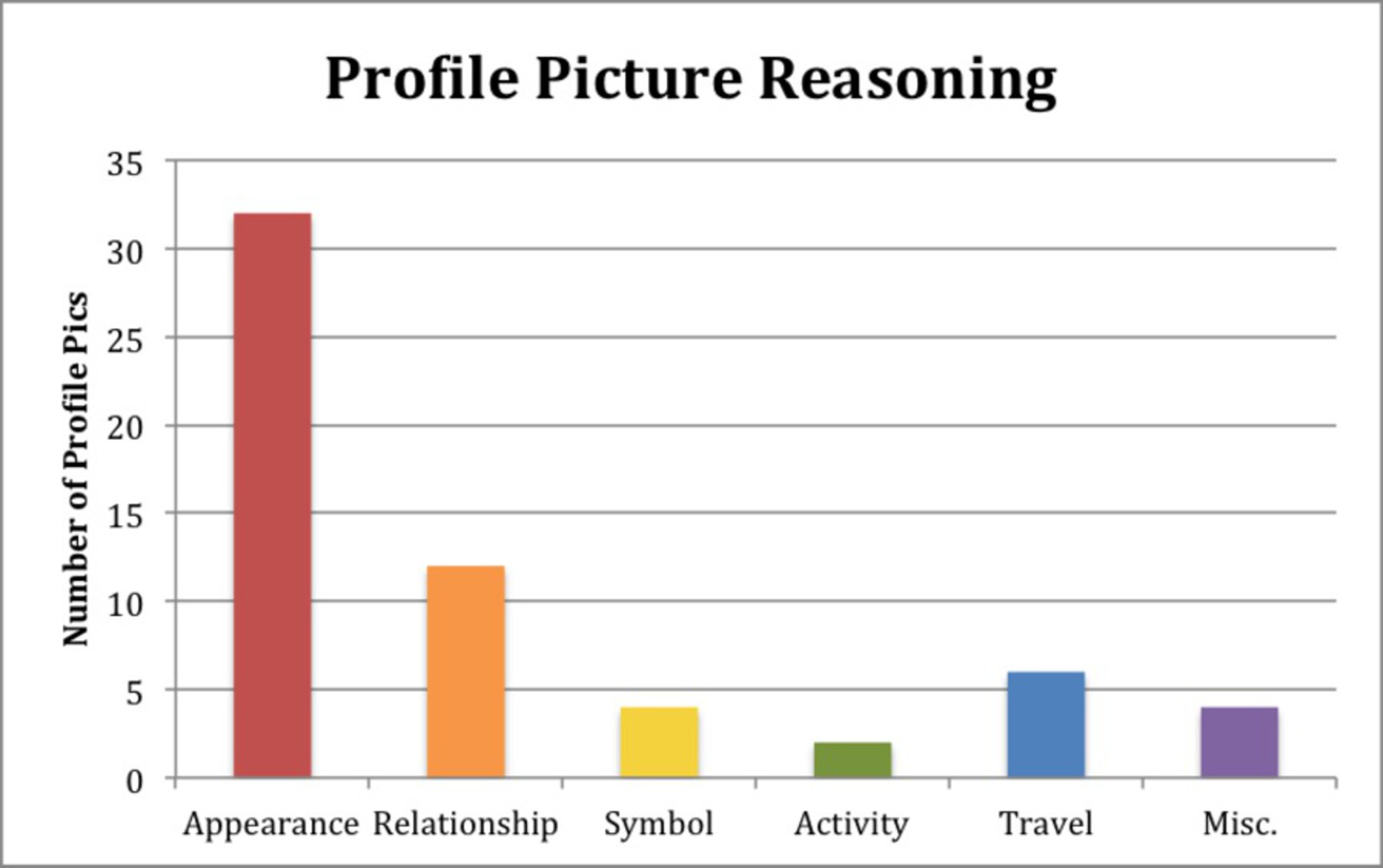 After gathering 60 profile pics from my Facebook friends, I categorized them based on what the photo’s purpose was (note: this is all based on my knowledge of the person and what I think the photo was trying to convey). As expected, a majority of the pics were chosen simply on the subject’s appearance, i.e. they liked the way they looked in the photo. This category consists mostly of selfies, formal occasion pictures, and photos with at least some professional direction. This makes sense as it’s the most obvious choice: the first thing people on your page is you at one of your best moments (in the subject’s eyes). After appearance, relationship is the second largest category; a majority of these pics are the subject with their family or significant other. An area of interest here is age; despite composing less than 30% of the photos taken, adults (by which I mean people who are above the normal schooling age, mostly people who have graduated from college) compose 50% of the relationship category. This may be indicative of associating your identity more with the people most important in your life as you age. On the flip side, the next largest category, Travel, is composed solely of adolescents. By travel, however, I don’t just mean a photo of a place the subject visited, but also unusual things they did. The purpose of this type of photo is to show off; the pic is saying, “Look at where I went, look at what I did”. This makes sense, as with the transition to adulthood, the subject is trying to define themself, mostly with places they’ve been or tasks they’ve done. With the same number of pics is the symbol category, composed mostly of photos of objects and things. As with relationships, 50% of this category is adults, suggesting again that as an individual ages, they are able to identify with things distinct from themselves. The other two categories, miscellaneous, composed of pics of either multiple or indeterminate categories, and activity, composed of pics the subject does on a continual basis, do not provide much information.

Overall, I wasn’t too surprised at the results of this project. I suspected most of the pics would simply be photos that the subject thought they looked good in. However, I was intrigued by the correlations between age and category of profile pic. I’d be interested to get more data on what photos older individuals use to present themselves, and how that corresponds to identity.

You did a really good job analyzing the breakdown you chose! I think I would have liked to see more than one breakdown, ie. looking at the number of people in the photo, but the analysis you gave seemed pretty spot on. I also think your graphs were a little unclear - at a glance it was pretty tough to get any info from it. A clearer explanation of the category types, separate from the paragraph, might have resolved this I think. On a much more trivial level, I'm not sure 'the results of this assignment didn't surprise me' is a great thing to say, but that's probably not a big deal. Glad to see this assignment got you interested though!

To gather and analyze the profile pictures on a social media platform.