Usually when I wake up, I go get some cereal and while eating it, I watch a video on youtube from someone that I'm subscribed to. This morning I watched CapgunTom's gameplay of the new FIFA16 demo that just came out. While I was watching that I saw an ad for heart burn which I thought was odd because that doesn't really have to do with FIFA and it's not like I recently googled things related to heart burn.

PIC LEFT) YouTube home page with snickers ad (I'm allergic to peanuts...) and recommended videos (no surprise most of them are about fifa/soccer youtubers because that's mainly who I'm subscribed to on youtube.

PIC RIGHT) My subbox including Destiny, a Let's Play of Until Dawn, and Call of Duty: Black Ops III 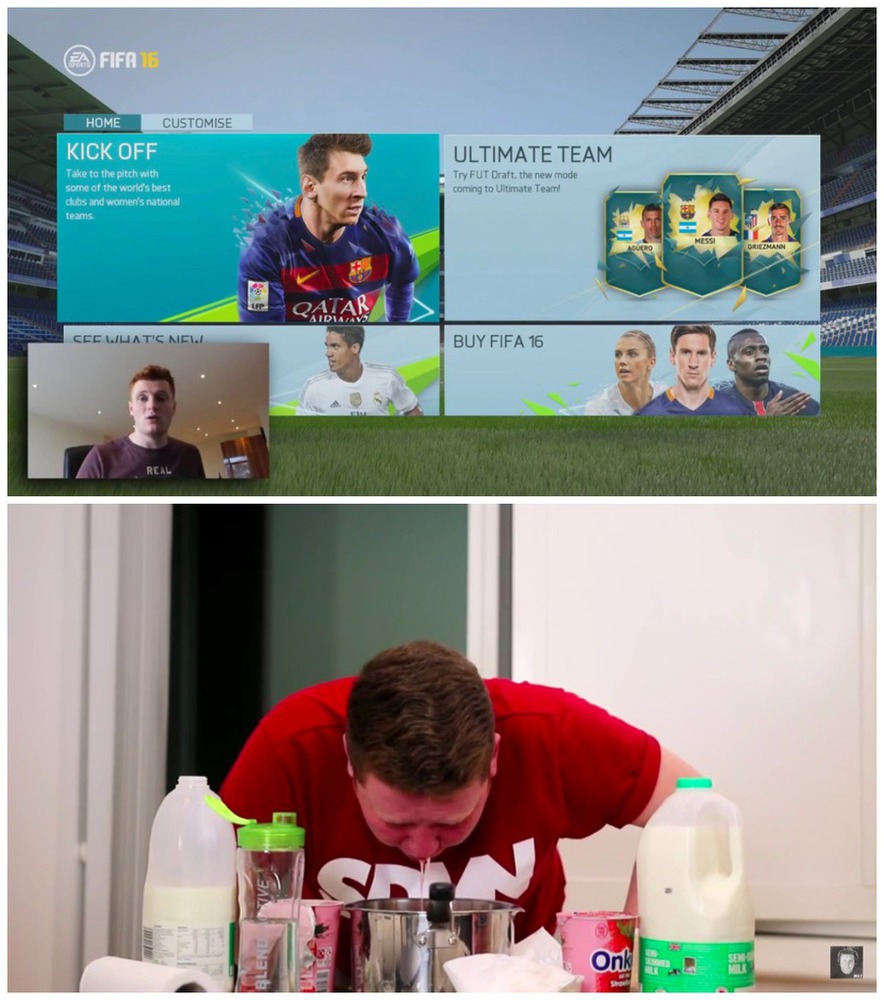 I mainly did homework (and laundry) today so whenever I felt I needed a break, I'd watch a youtube video because they're mainly 5-10minutes.

PIC TOP) CapgunTom's gameplay of FIFA16 demo. Inside the demo, the game tries to advertise 'what's new' in the game.

PIC BOTTOM) Ethan (youtube alias Behzinga), part of a youtube group known as 'The Sidemen', does the 'Carolina Reaper' challenge. He eats one Carolina Reaper pepper (one of the hottest peppers known to man) and this is a screenshot of the aftermath. Notice how he's wearing a 'SDMN' t-shirt, in order to silently promote his brand/logo/group. 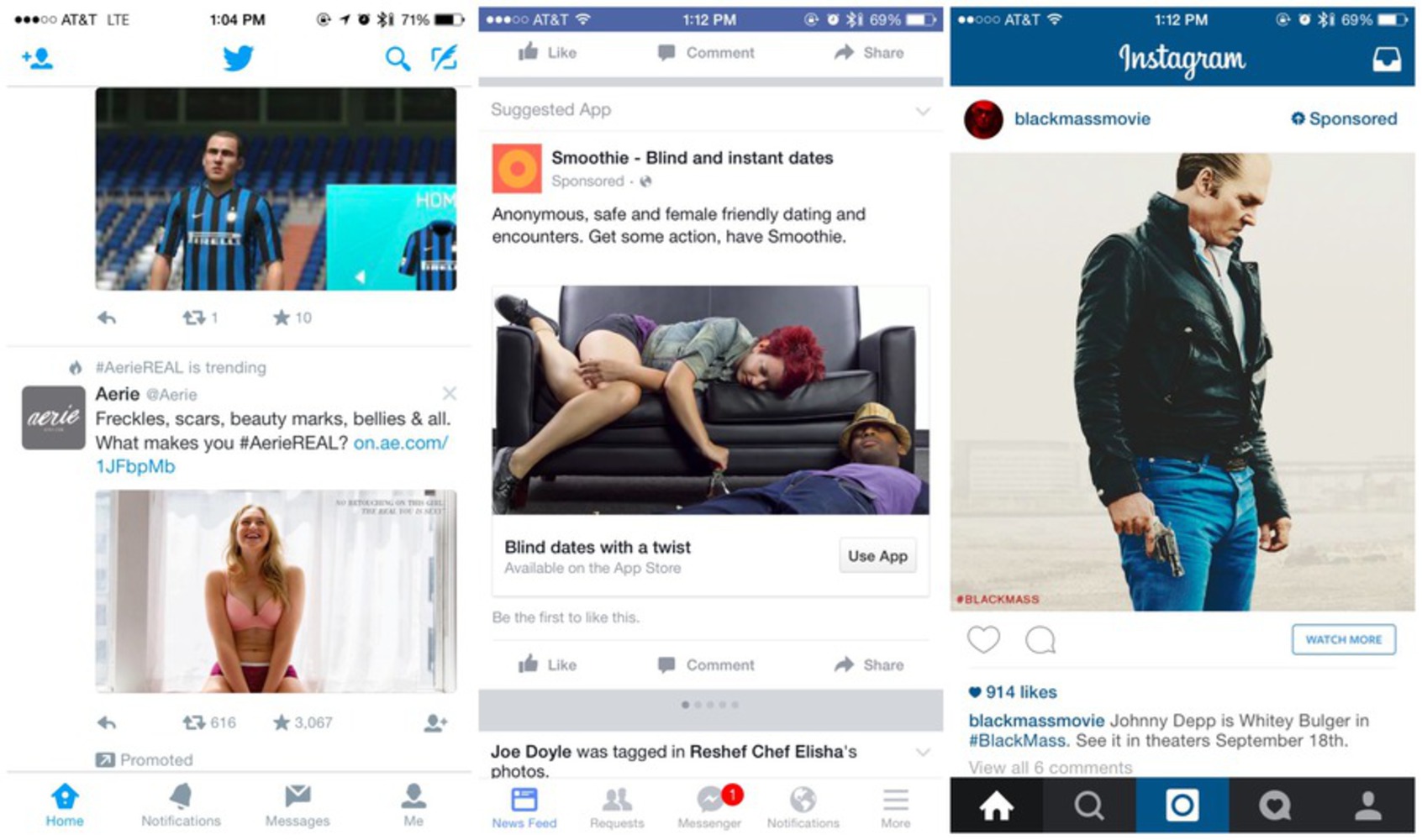 Throughout the day, I go on Twitter (Left), Facebook (Mid), and Instagram (Right) basically to waste time (bad habits die hard). Sometimes I see interesting topics or discussions on these forms of Media, and honestly this is where I get the majority of my news.

However, like youtube, these social media outlets are used to inform me of things related to fifa, soccer, fifa youtubers, and my friends.

In these screenshots however, I was bombarded with ads about irrelevant topics. 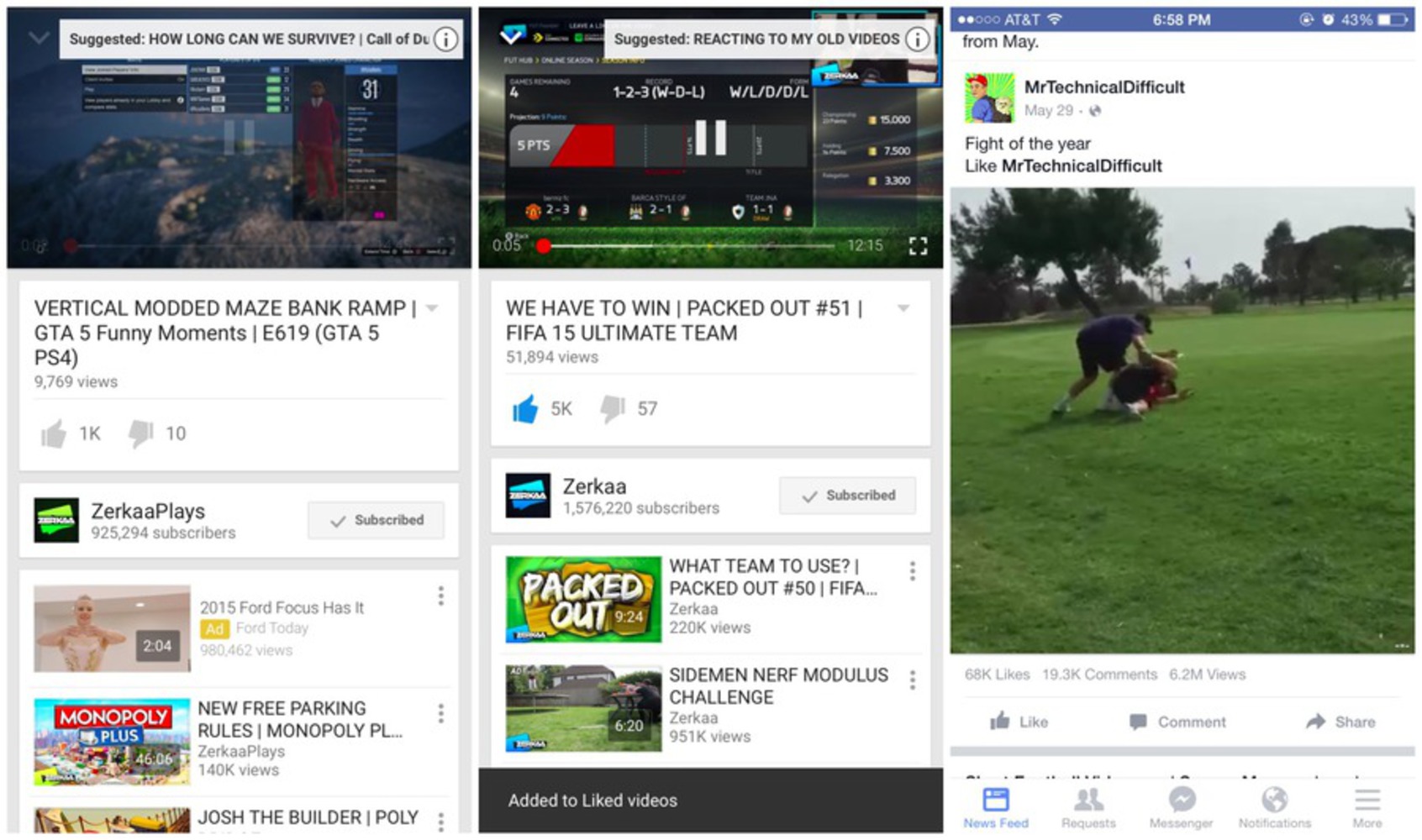 During a homework break, I watched videos from one of my favorite youtubers (Zerkaa) whom I've been subscribed to for about 6 years ever since he started out uploading Killcams in MW2 (he now is part of The Sidemen, who are based in England, and is primarily a fifa/gta youtuber with the rest of his group).

I also went on facebook and saw the lamest fight I've ever seen (if one can even call it a fight) which has amassed 6.2 million views. This just shows what can go viral.

While I was joining pictures together on PhotoJoiner.net, PhotoJoiner.net decided to hit me with an ad for 'protecting my precious photos' and it politely asked me if I wanted to share my joined picture on facebook instead of saving it to my computer.

Finally, anyone that knows me knows that I'm listening to music basically 24/7 (yup even when I go to sleep), and the artists' names as well as their album covers count as media as well (currently listening to about 12 songs part of the 'Grime' [UK rap/hip-hop essentially] genre). I also snapchat a few close friends once in a while.

Today was mainly a stay inside and do homework day so most if not all of the media I encountered came through a screen, whether that be my phone or my laptop. I feel like 80% of my media comes from social media (consisting of facebook, instagram, twitter, youtube, and twitch), and of that 80%, about 85% of the media I choose to come into contact with involves fifa and soccer in some way.

This can be seen through the journalistic summary of my day above this passage.

However, a lot can be said about the advertisements these media outlets decide to display to me. I realized that internet ads play a big role in what's consumed, but I never realized how much until today especially because I turned off adblock. Without adblock, there were ads for basically every youtube video I watched, as well as 'promoted/recommended' videos, tweets, and posts.

It's rather annoying how much media I see that was not specifically chosen by me. It'd be a different story if the majority of these ads/promoted videos/posts had any relevance to me or interested me but they don't.

Your project offers a good balance of media description and analysis. Especially interesting was your insight that there was a lot of media forced into your life, regardless of your interests (or disinterests). This was especially apparent because of your emphasis elsewhere on content you were passionate about, which gives readers a sense of the jarring transition when you are interrupted by unwanted ads. Good job on giving background on your followed YouTube channels and games as well.

However, I would have liked to see more of a narrative aspect of your journal, in order to add some continuity to the media encounters and allow the audience to more closely follow your transitions between content. You should have taken a little emphasis away from describing all the different YouTube channels and videos and perhaps widened your focus to other media.

All in all, focused and personalized project with some interesting insight.