I am Dr. Frankenstein and Photoshop is my operating table

The goal of my project is to target a specific audience in an attempt to market something that I have created with art and images that are not my own. I drew inspiration from articles about big name retailers stealing content from small-time artists, changing it a bit, and selling it as their own on their products.

In the context of wanting to target a specific audience, I thought why not target the most specific audience: one person. Then I had to think about who I wanted to target and what I wanted to create for them. At first I thought of going after my friend who had a desktop background of an anime magazine centerfold and getting rid of the text for him and selling him the product, but I realized that I wouldn't really be able to put my own personal touch.

I finally settled on targeting my old co-worker who likes to stream games on twitch.tv. His channel was pretty bare-bones, so if I were to create some graphics for him, he'd probably jump on the chance to obtain them.

Using Photoshop and Google images, I created both a banner for his channel and several headings for the description area below where his game-play would be streamed. Save for cropping, masking, and layer effects, the image is a mashup of other images that I found online. Below is a compilation of all the images that I used. 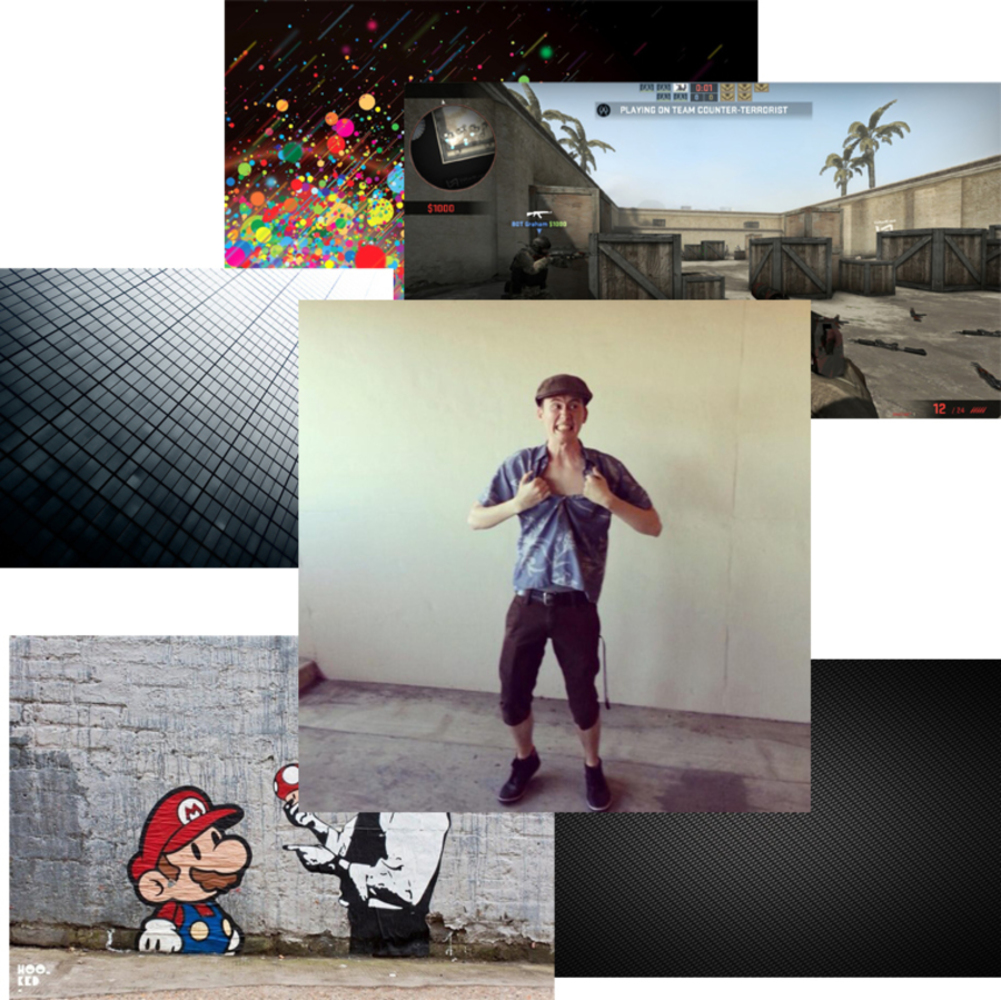 The colorful circles and lines image I used as a background. The in-game screenshot is of his favorite game, Counter Strike, so I took the shape of the AK-47 white silhouette, vectorized it in Illustrator, and then placed it in the image. Two gray images I used as textures for various parts of the image, the one on the left is actually the side of a building. And finally the cop and Mario image I used as the main feature of the background. Of course I wanted to include him in the banner, so I added an old profile picture of him that I thought was quite funny.

I chose the cop and Mario image because I wanted to allude back to the street art theme and it has to do with video games.

After spending a good while tweaking colors, transparencies, and gradients, I arrived at this:

There was a lot of steps involved in the creation of this, so I'll spare you a lot of scrolling and just capture a glimpse of what this project looks like in-app. 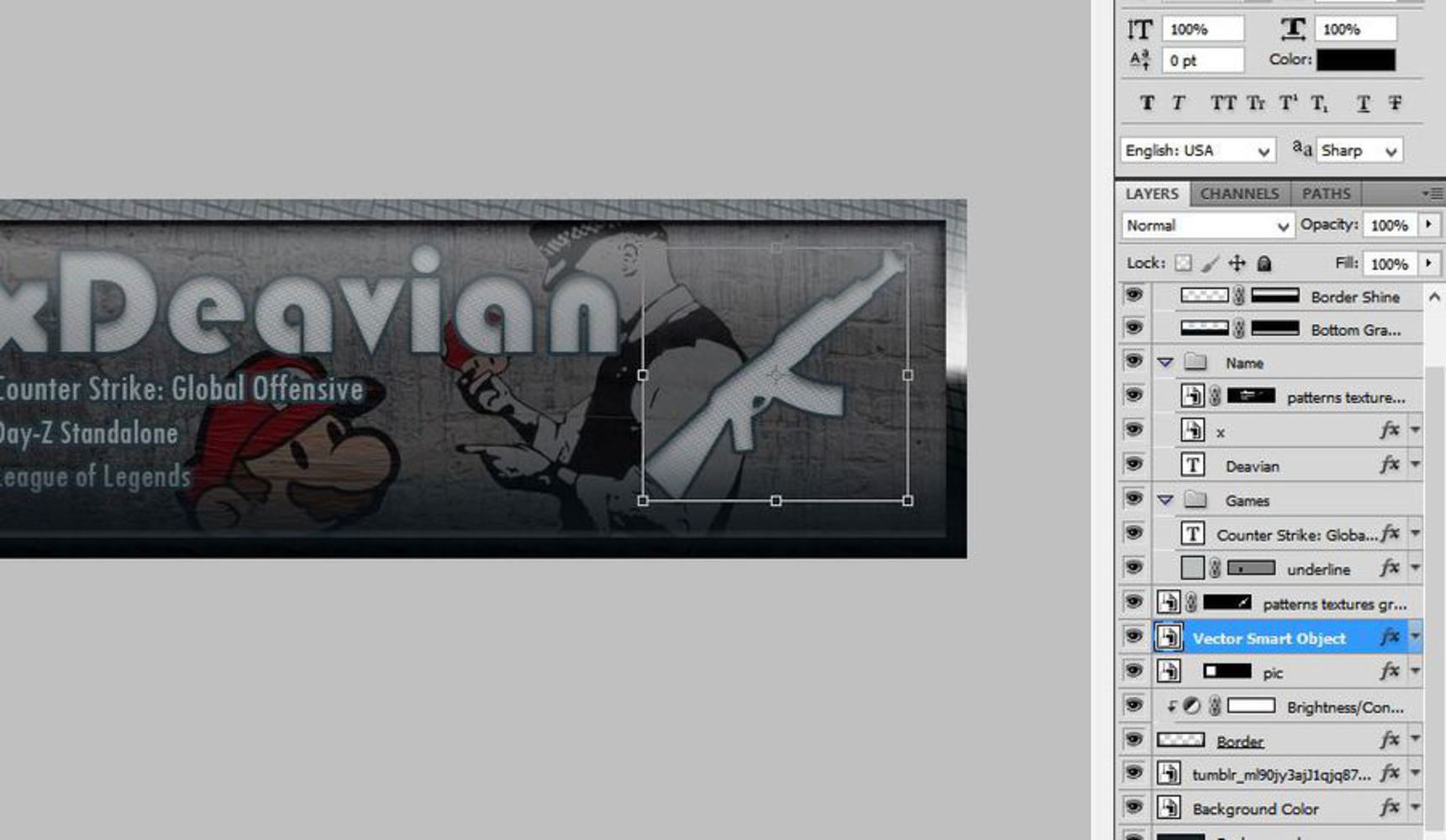 I will highlight a few points of interest. As I mentioned before, one of the images I used was of the side of a building. If you look closely, the border of the banner is actually composed of that image by using the content-aware fill and repeating certain parts of the image to create a sort of mesh pattern. The text and gun silhouette are texture masked with a 30% transparency of the gray carbon fiber image. I actually had to create my own letter "x" for the name because I didn't like the way the x looked in the font next to the other letters.

After all was said and done, I actually turned out quite pleased with my product. I've never taken any graphic design courses and all the skills I have with Photoshop and Illustrator are from learning on my own time. I wish there was a better street art image I could use for the background since no matter the composition, some part of the image was obscured (twitch.tv has strict guidelines on pixel sizes for graphics).

My friend was quite pleased with the outcome and did actually purchase it from me (and by purchase I mean barter, hopefully that still counts). You can see the heading graphics that I created for him if you scroll down a bit at twitch.tv/xdeavian and there is a compilation of all of them below. The banner shows up you click on his profile name or picture in the upper left. 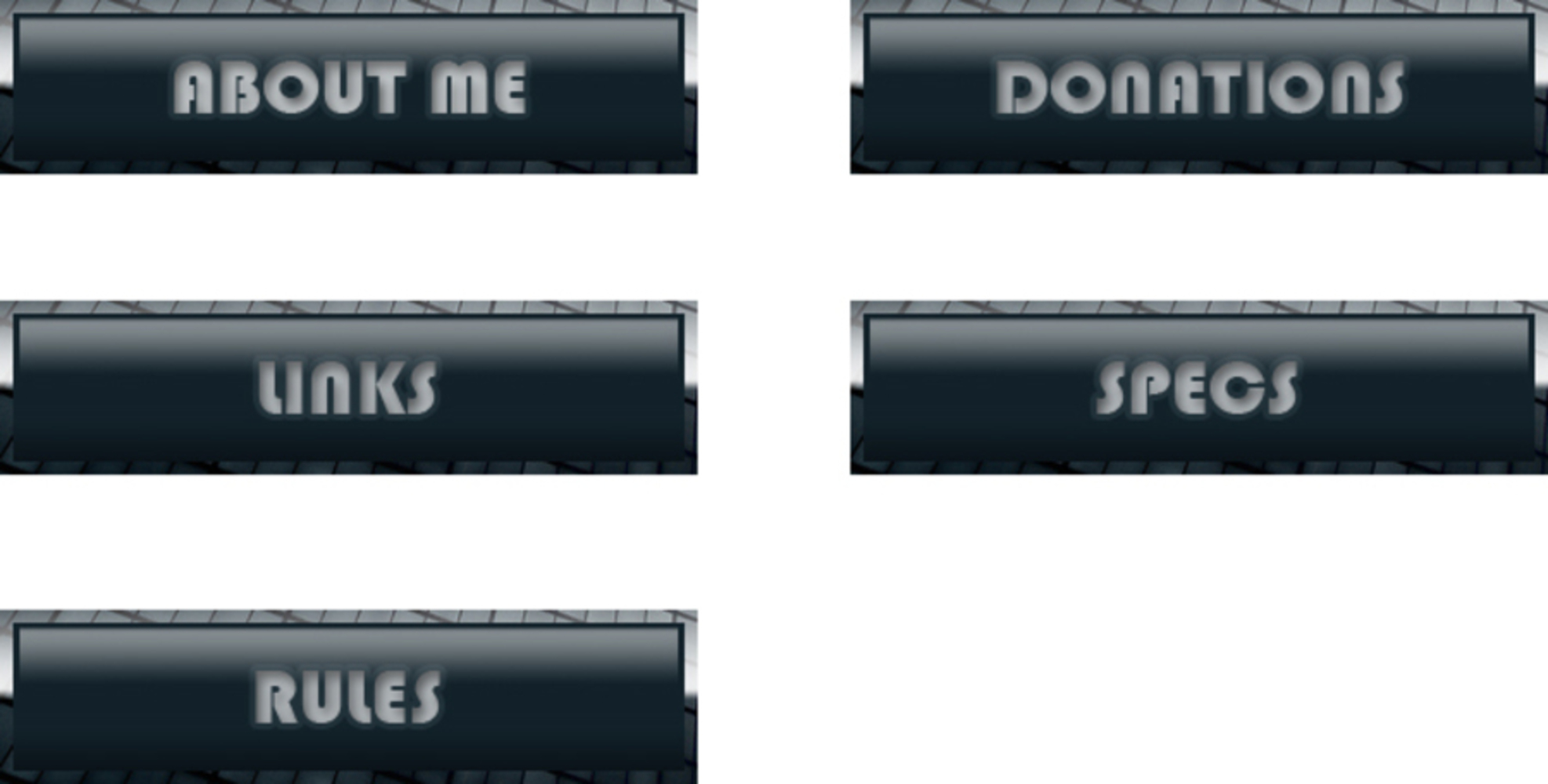 After finishing up this project, it dawned on me how easy it was to create "your own" artwork out of other artworks. It is easier to recycle and repurpose others ideas than it is to create original content. If I had done this image from scratch, It would have taken me many times longer than it did. It is apparent why some people will blatantly steal content from others, alter it a bit, and then repackage it as their own: it is so much easier than doing it from the ground up. Also, you don't have to be nearly as creative.

While the images and art I used are not popular or universally recognizable as a particular persons art, it is still someone else's nonetheless. By taking that art, I devalued both the original artists work and my own.

I really like your idea to choose the target audience first because it's better for marketing. And this is a truly commercial art. I also think your photoshop skill is very cool and final product is very nice. The thing is that I don't think know what kind of thing you are specifically marketing. If you can do some true marketing after you make your product and see what's going on later, I think it will make a better project.