I have severely reduced my activity on facebook in an attempt to cater to my widespread audience. I find that I change how I present myself based on my company. I think many people do this. A strong example is how college students interact with each other in contrast with how they interact with their parents or other students’ parents. I find myself worrying about how one audience will react to a post on facebook that another audience might agree with. Therefore, I want to see if the conflicting audiences will in fact react the way I predicted them to. I hope to prove to myself that I can be my true self in an online environment with many viewing eyes. In proof of this, I would not elicit the strong reaction I am currently expecting.

I want to post a profile picture that without context will confuse the highest number of subsets of facebook friends. This confusion could come from posting a picture much unlike the pictures I usually post, or a picture that implies a big life change. I want to see if they will pry publicly for an explanation, or if they will assume that it is not as shocking or out-of-the-blue as it may otherwise seem. 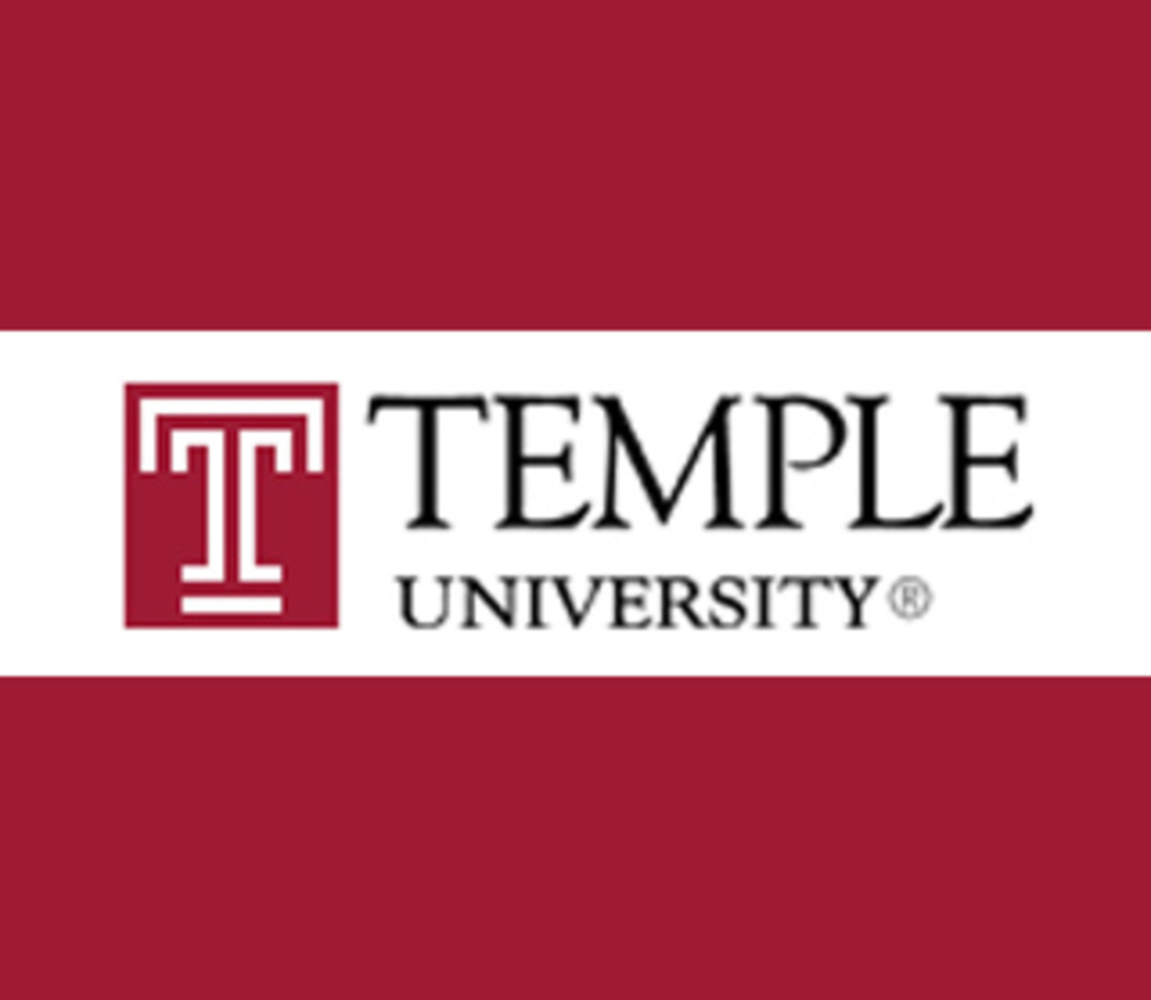 I came up with a few ideas. Some had more impact than the Temple University picture, but I also had to keep in mind that I would be making an impact and how that would affect my relationships with people on facebook. Some ideas included posting a picture with a guy friend that looked like a couple photo, posting an irrelevant photo, such as crumpled bedsheets, and photoshopping my hair a different color. I decided to go with changing my picture to Temple University, as I really wanted the effect to be confusion. No context or description was given, and I didn't respond to any comments for the week. I did find challenge when family and friends were concerned. I therefore changed my project to include messaging any commenters immediately after to explain. I explained it to them in this way: 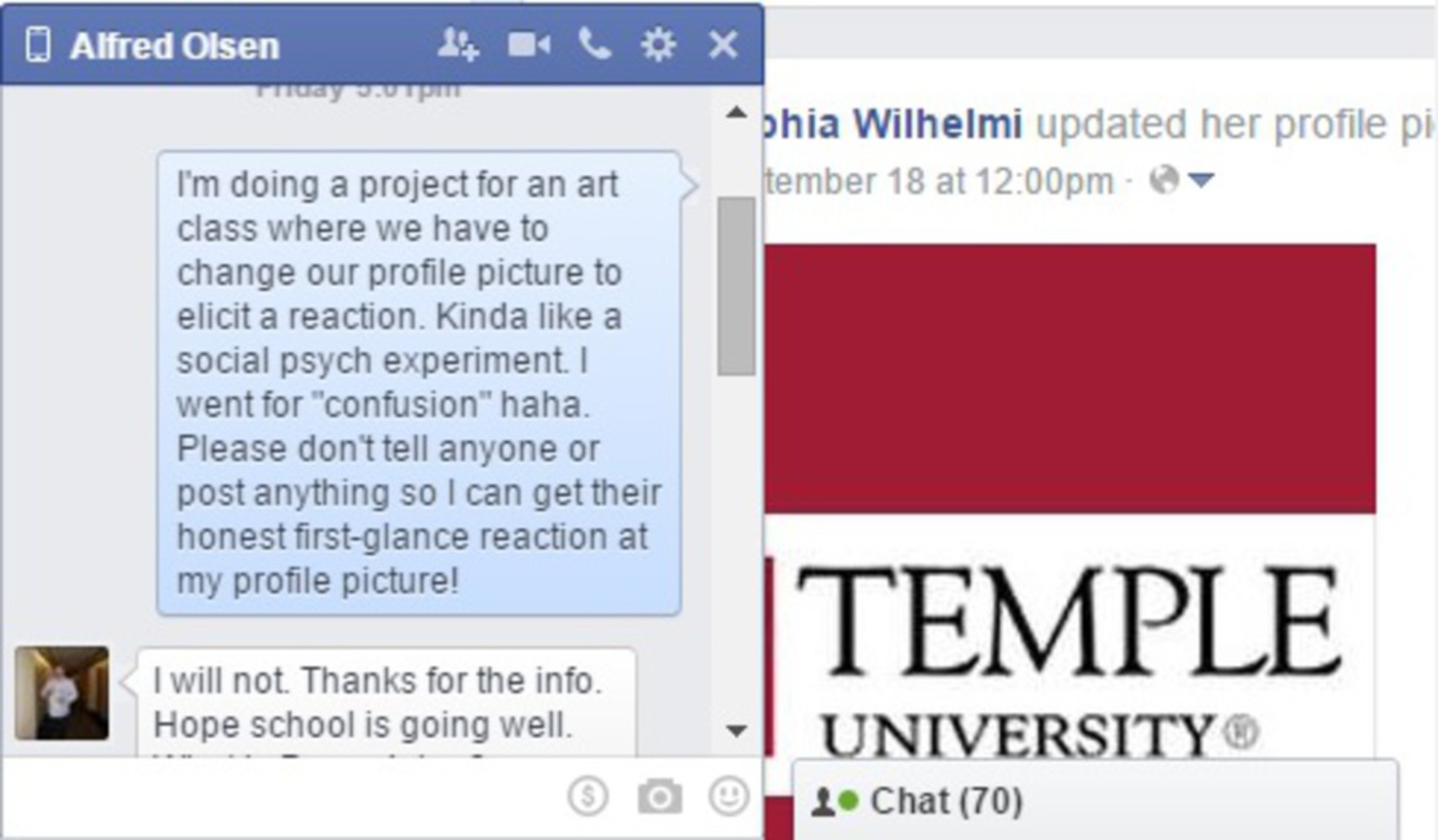 I created discord on my profile page. My facebook friends would possibly see my profile change on their new feed, and may think that I am transferring or have some new affiliation with Temple, and then would see that I still have "studies at Carnegie Mellon University" on my page, as well as a picture of the fence. I was also hoping to catch the eye of one of my old friends who currently goes to Temple. 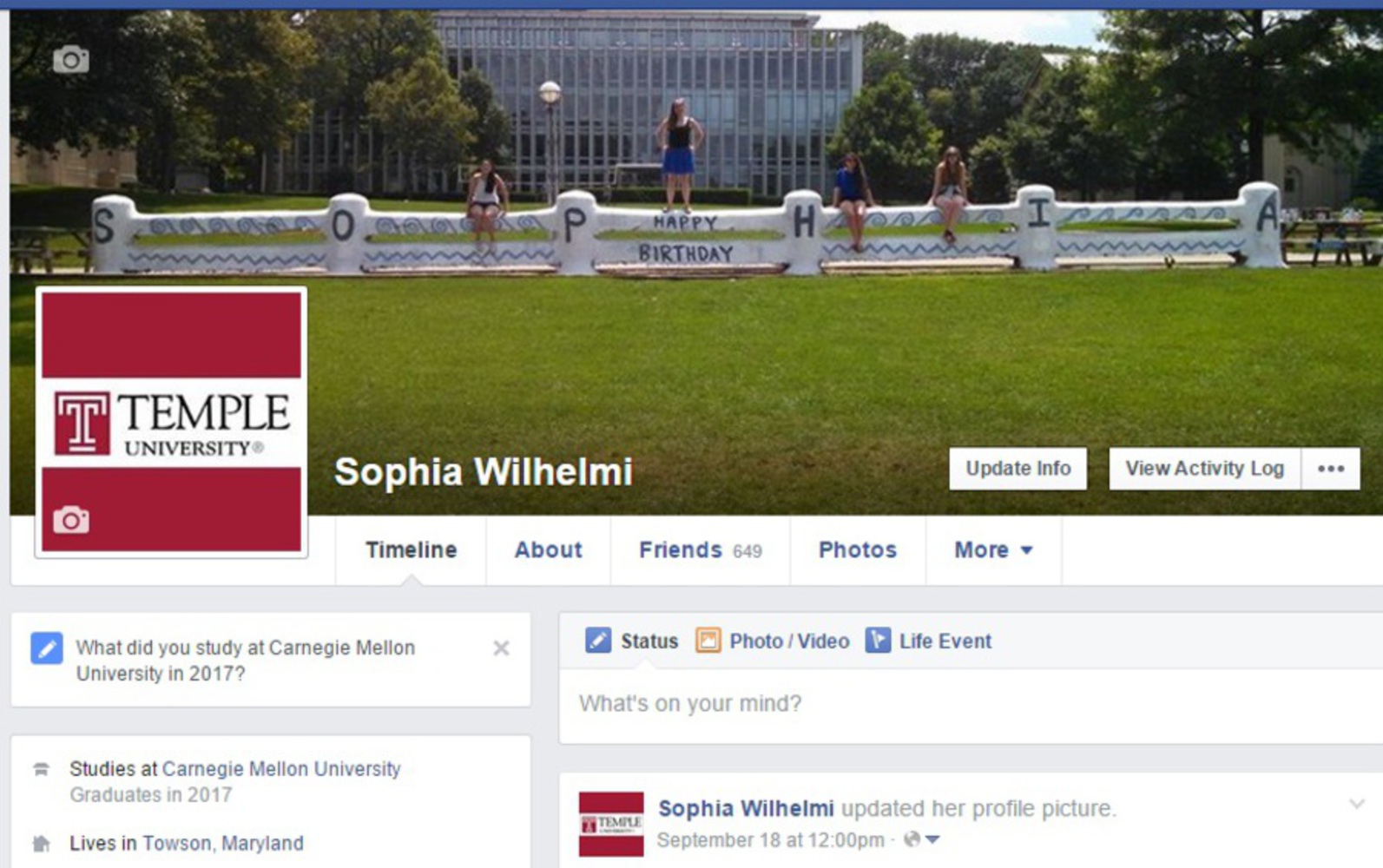 I simply Google image searched for a Temple University that looked official and genuine. I was happy with the red top and bottom thick bars. It definitely drew the eye when I commented on others' posts. The responses are shown below: 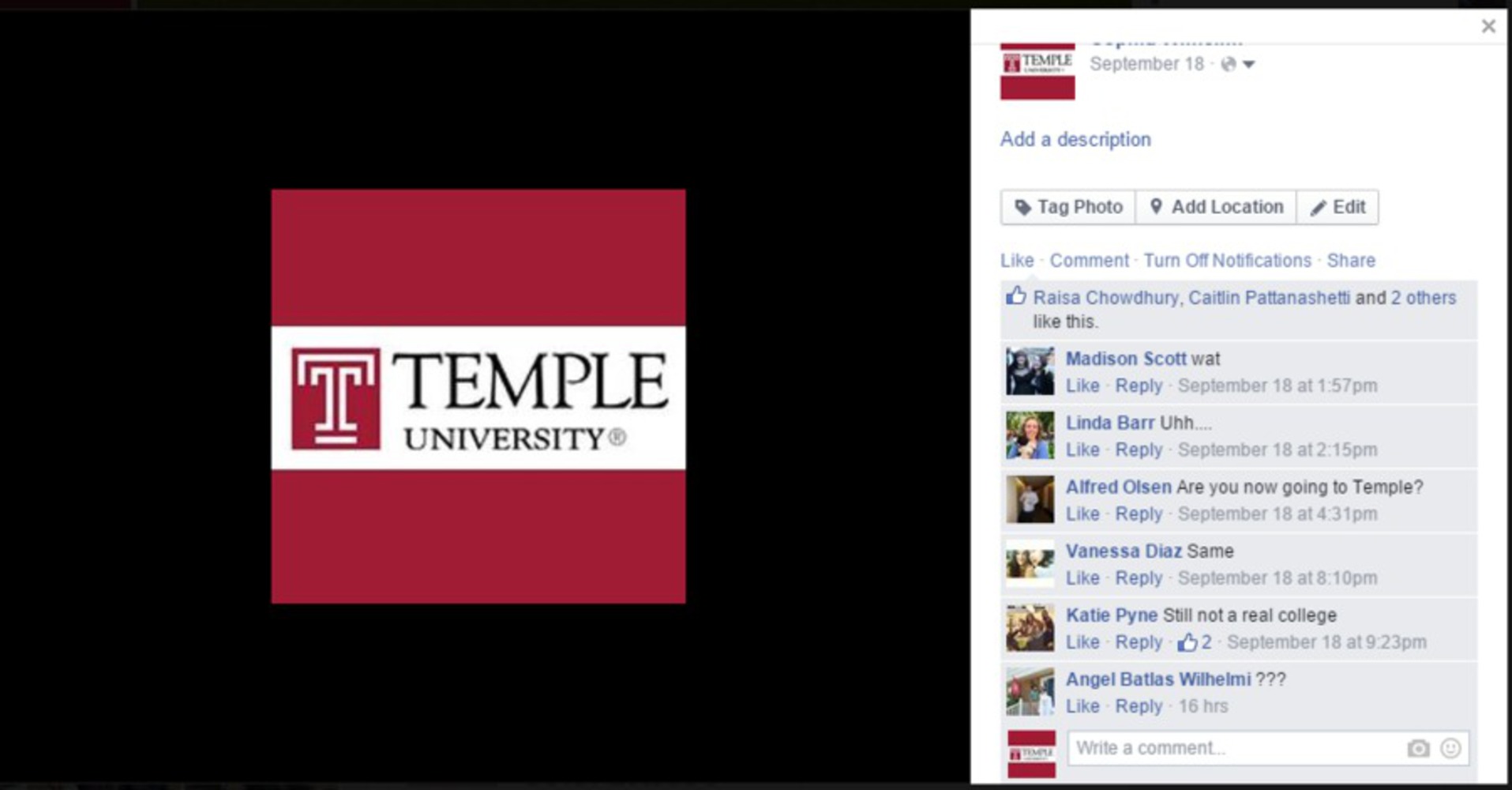 The facebook message came first, from a friend and avid facebook user. He told me later that he thought something terrible had happened on Temple's campus, and that I changed my profile to show support. This goes along with participation through media, such that it is common for people to alter their profile pictures to show support or take sides on a popular controversial topic.

The first two commenters showed their confusion with minimal words, one using a word modified by the internet ("wat" from "what"). My high school chemistry teacher gave me the response I was expecting, as he asked if I was going to Temple. He is more blunt than others on facebook, which was helpful to get a sense of what others might be thinking. They may be censoring what they put on facebook, just as I do.

The next two commenters are people I see often, and commented with inside jokes because they know me well enough to see this as a random change, and not a meaningful one.

The last comment came within the last 24 hours, and was from my mom. I glad to see she saw this, as her reaction was interesting. She usually comments in full sentences, possibly because she is used to writing emails, but instead she commented "???", showing greater confusion.

Overall, it seems that my less concerned filter in what I post lead to some interesting reactions. It also lead to comments that were characteristic for some, in the case of my chemistry teacher, and uncharacteristic, in the case of my mom. I discovered that the filter I put on the content I post is well placed, as my facebook friends take concern over the meaning behind this post. For some of my facebook friends, facebook is our main or only point of contact. By posting things that I may want to in the short term, may confuse or concern people about my livelihood in the long run. If I were to repeat this experiment, I would see the result of not explaining myself directly after their comment. This way, I might be able to see more than just their immediate reaction, but possibly some interaction between my facebook friends about the profile picture change.