Out Of The Wild

Made by Sienna Stritter

To tell a new story through re-ordering.

I created a short video that tells a new story by taking an existing story and telling it backwards. I picked the story of successful, wealthy, athletic, and promising college graduate Christopher McCandless who gave up everything he had - all his money and most of his possessions - to explore and live in the Alaskan wilderness. If you tell his story backwards, it's a tale of a homeless person in Alaska who treks all across America to Atlanta, where he gradually adjusts to the normal, civilized world and earns himself a degree from Emory University.

I used iMovie to create a series of frames from the movie and added a song as audio. Watch my video at: https://youtu.be/iuDcJAue084

The point of this project was to edit and shape existing media content to create a new story. I decided to use the story of one of my favorite books, Into the Wild by Jon Krakauer. Since we were constrained to starting with video or audio data, I used the 2007 film “Into the Wild” based off the book as my content. I chose this story because it tells the tale of a young man on a physical and emotional journey in which he clearly grows and changes over time. I saw potential to tell another story here by changing the point of view by re-ordering important pieces of the timeline of his life. Time is something we usually think of as regular, linear, and straightforward, where every event follows causally from another. But in this project I attempt to prove that we can extract a fairly logical sequence of events that is not chronologically consistent.

I got the main idea for this project from the assignment write up, which asked “How could you create a previously inconceivable story by remix, re-editing, or re-ordering?” The idea of re-ordering stuck out to me most. It reminded me of the poem “The Lost Generation” by Jonathan Reed, which can be read forwards and backwards to tell two completely different stories. This relates to a more general technique called reverse chronology, a method of story telling where the plot is revealed in reverse order. A little bit of research revealed that identifying humorous examples of reverse chronology in pop culture is a relatively common topic of discussion on forums like buzzfeed and reddit. These ideas were my inspiration. Below are two examples from a buzzfeed post: 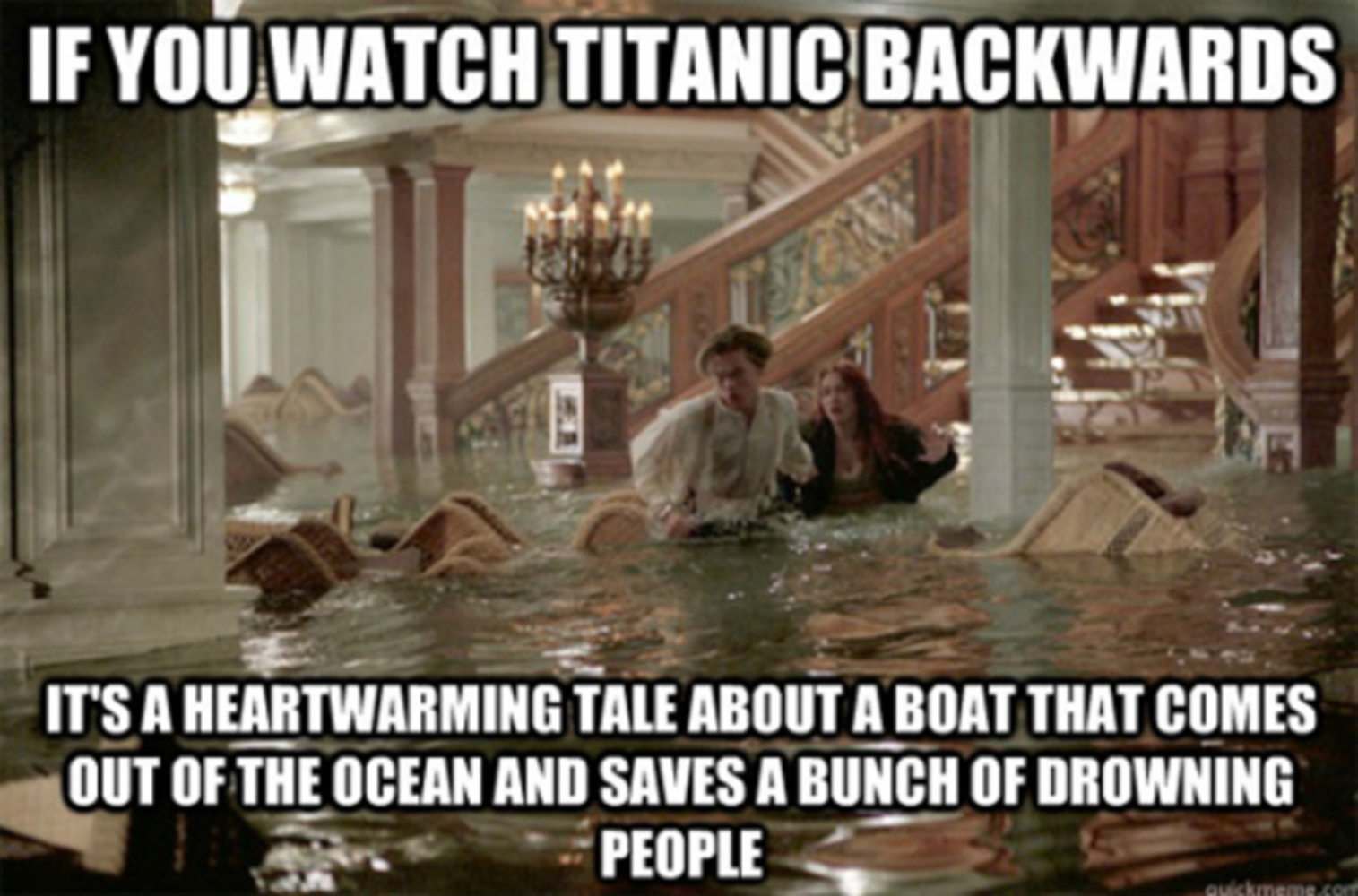 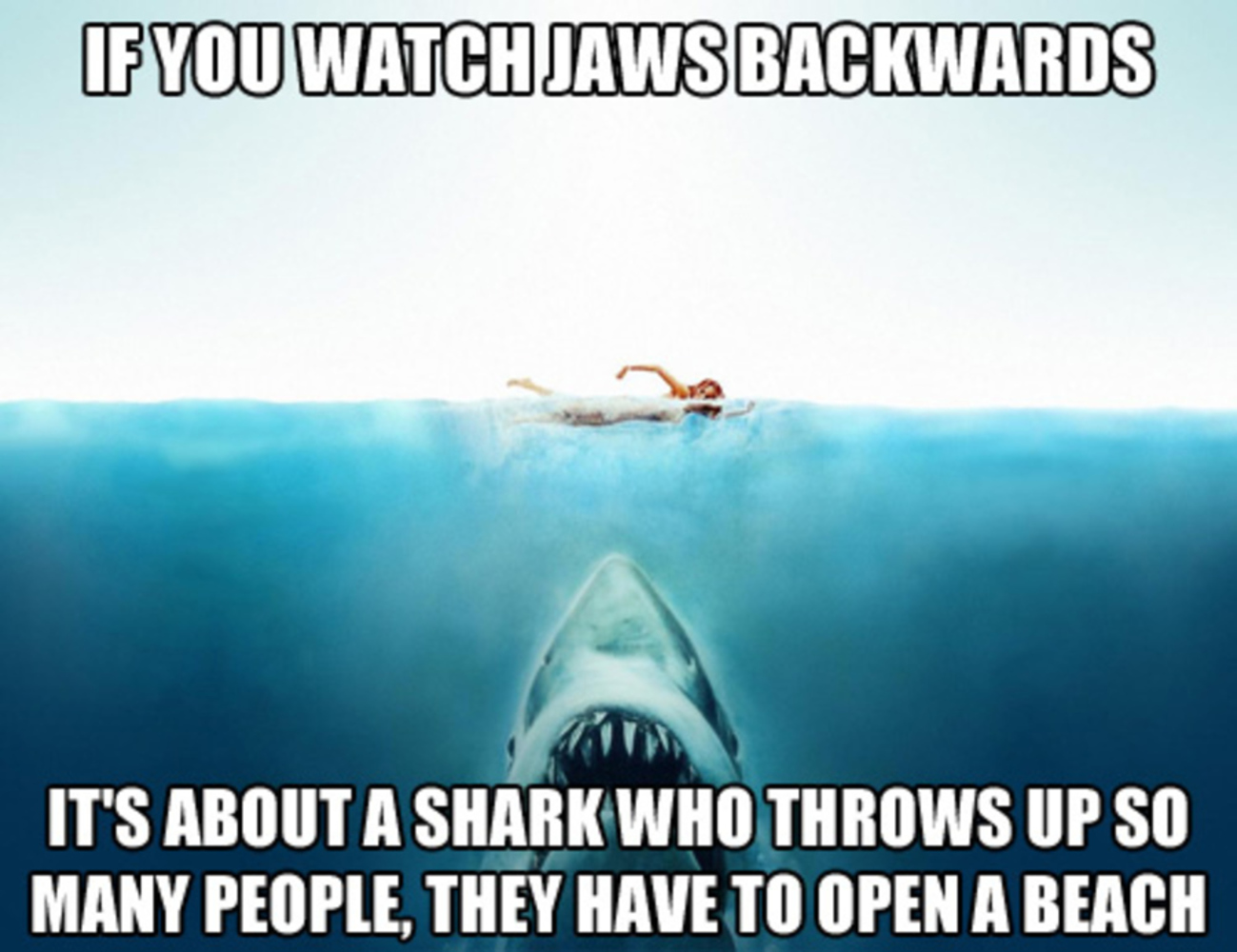 To create my outcome, I watched a YouTube video on the making of the movie. The video included clips from the film and I took screenshots of frames that I thought were representative of milestones along Chris McCandless’ journey. Then I spent a lot of time trying to figure out how to order them and how long to play each – this was the hardest part of my process. I tried to sort them into a four sections:

Once I had a reasonable order for the frames, I threw them into iMovie and added audio: Lewis Watson’s song “Into the Wild”.

The biggest design decision I made was to use still frames rather than actual video clips. I decided to do this because I thought the frames were more indicative of quick snapshots into his life. It’s easy to lie, or manipulate the truth, when you don’t get the whole picture. Each frame is a tiny peek into one part of his life, but the story isn’t apparent until we put a bunch of frames together – and this is where I had the flexibility to create a new story.
I also considered adding text captions to the video to tell the story, something along the lines of the following:

Chris McCandless lived in Alaska. All on his own. He explored. He adventured. He lived loudly. Boldly. Beautifully. Wildly.

Home was an old broken down bus. Alone but not lonely, he provided for himself.

But life got hard. Scary. Dangerous. He was cold. Hungry. Broken.

And he eventually decided he'd had enough. He cleaned himself up. He walked. He hitchhiked. He drove.

He reached the city. He didn't fit in. He was out of place. Confused. Overwhelmed.

He met a family who took him in. He worked hard in school. Graduated. Established himself. Lived a new life.

I ultimately decided not to include the script I had written because I didn’t want to give my entire intention away. The whole point I’m trying to make with this project is that we can tell an entirely new story by selecting pieces to show. The new story is realized when the audience fills in the gaps – all the details and causal relationships they infer from frame to frame. I thought that literally spelling out the plot of my new story took away from that larger goal and would just become a distraction.

My inner critic is pretty pleased with the product overall. One of the things that bugs me, though, is that I could do nothing about the fact that he grew older from the beginning of the film to the end, so in my video he sort of appears to age backwards. It also should be noted that I did not order the frames precisely in back to front order. I wanted to keep them generally in reverse order but I prioritized creating a story that made sense over keeping a strictly reverse chronological pattern. Also, some of the frames are used out of context, just to guide the plot.

If I could do this project again I would really like to focus on the audio piece. I like the music I picked, but I think it would be really cool to have more sound effects as the frames come and go, especially when the video transitions from between the major stages of his life. I would also spend more time identifying suitable frames from his time in “the real world” in Atlanta so that the end of my video could be a little more flushed out, because I feel like his transition from wilderness to civilization is rushed in my clip.

Into the Wild Book: https://en.wikipedia.org/wiki/Into_the_Wild_(book)

The Making of "Into the Wild" Youtube Video: https://www.youtube.com/watch?v=pofkWsxzUOI

I think you chose a super interesting idea that you executed really well. Even knowing the actual order of the story, I could still visualize the story that you were trying to tell. I know in your documentation you said that you didn't want to use video clips but I think they would have helped tell the story a little better because since some of the frames aren't near each other in chronological order the jumping around can be slightly disorientating. Also I think the script idea would be a good idea because I didn't realize it the first time I watched it what some of the scenes were but after reading the script and documentation and watching it again the scenes you picked started making a lot more sense. Overall, it was a really great project. The audio and visuals worked really well together and it was really beautiful to watch and a very uplifting story.

To tell a new story through re-ordering.