Made by Christopher Reyes · UNLISTED (SHOWN IN POOLS)

Translating the vivid aesthetics of Blizzard Entertainment's videogame, Overwatch, into casual wear that's both recognizable yet can stand independently of its inspiration.

My project proposal is to create casual clothing inspired by the vivid aesthetics of videogames - in this case Blizzard Entertainment's Overwatch - in a way that is both accurate to the character chosen and is also able to stand as it's own piece. It's a different approach to merchandise, with the possibility of providing consumers with higher quality products that tend to their desire to reflect their love of an intellectual property while also being able to wear it outside of that context. While more work is needed to produce these specialized products rather than printing out a simple logo, I believe there's a significant amount of potential in this approach to merchandising, and wanted to investigate what that shift would entail. 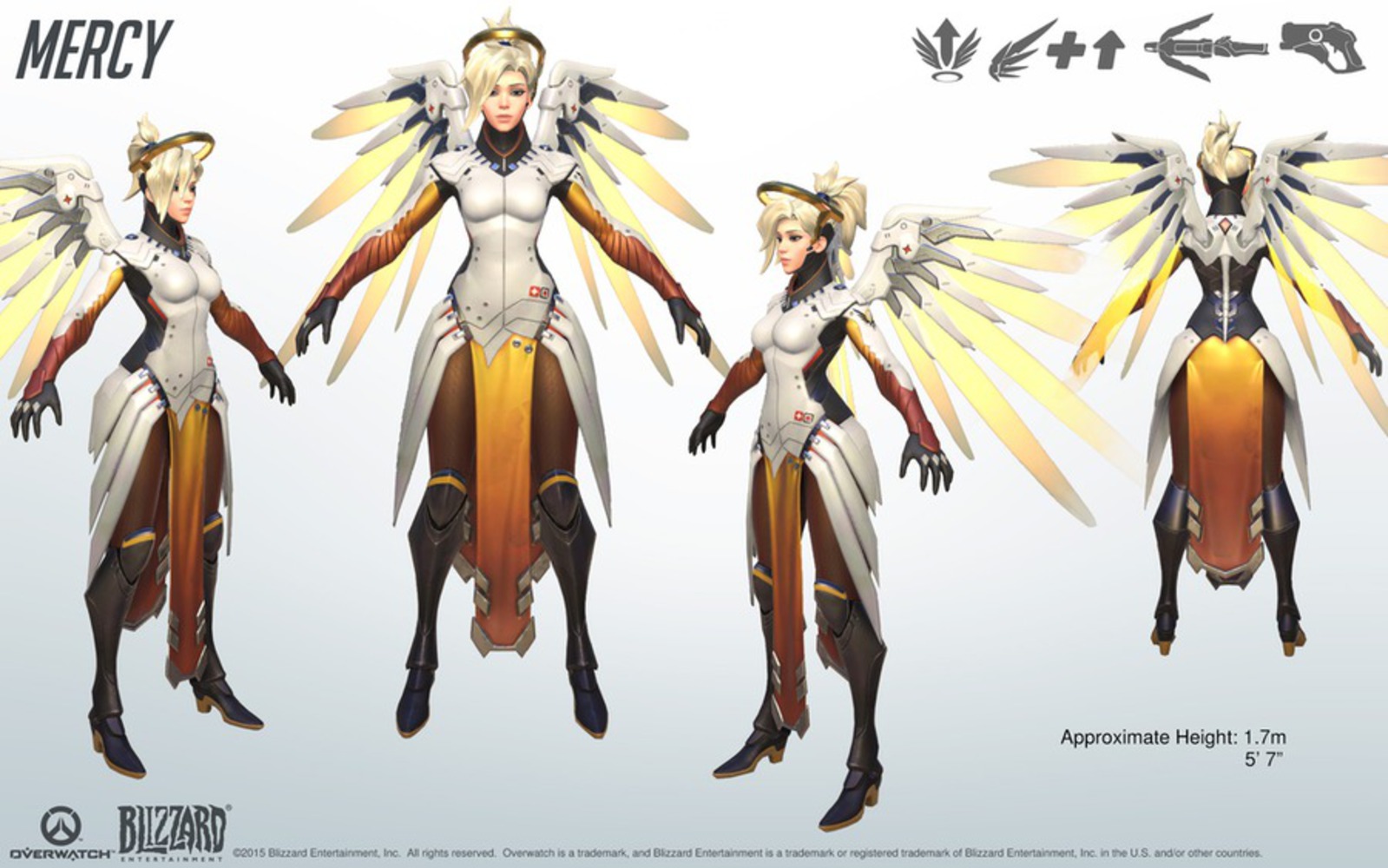 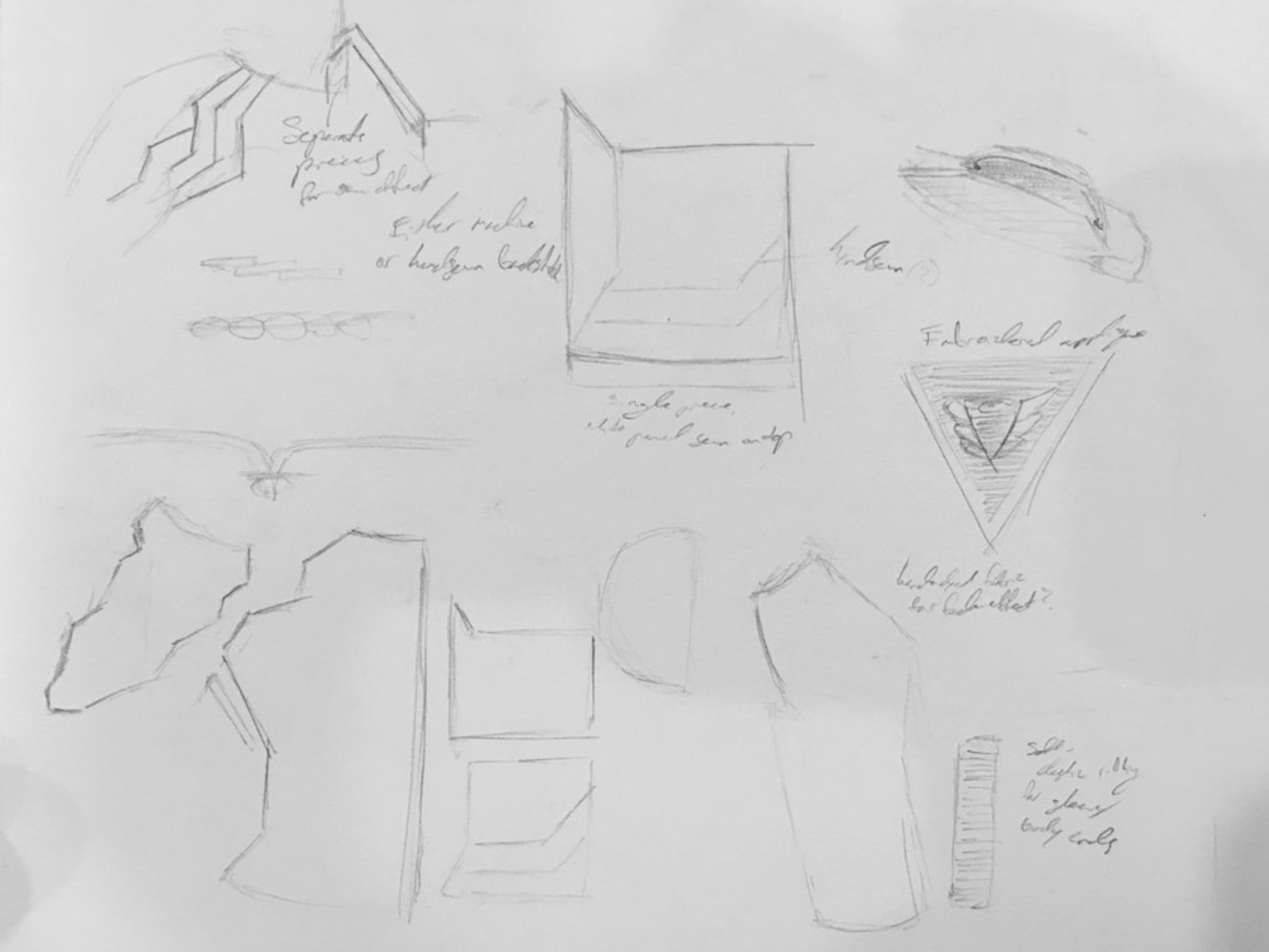 Overwatch is set in a near-futuristic world, so many of the designs in the game are oftentimes bright and extravagant, so I wanted to include some of those details in a more subdued manner. In this design, it came more in the way of angular forms that emulate armor plating, which brings the challenge of creating clean lines on an article of clothing that is often attributed with loose comfort. Utilizing what I had learned in class, I figured I could stick with both machine sewing and hand-sewn backstitches in order to carefully piece the patterns together.

In order to understand what the patterns would look like in the first place, I decided to investigate the models used in-game in hopes that I could then translate it over into physical pieces. The character I chose, Mercy, a medical genius and staunch pacifist, is laden with angelic motifs, with several instances of banding to coincide with the shape of her wings. Additionally, most pieces of her armor interlock to create a streamlined torso, which I intend to emulate with the cutouts I included on either side of the body of the hoodie, giving the piece a better sense of form while still being open to movement.

For the general shape of the hoodie, I looked at how panels interlocked in various iterations of hoodies to ultimately come to the final pattern. What I was most surprised by what that the connection between the sleeves and the main body was larger than I thought it would be, with no seam by the shoulder, instead coming closer to the head opening. I made it a point to stay true to this while also attempting to give it some shape through the geometric panels on the upper arms, which should, in theory, keep the form from slumping while preserving the freedom of movement that hoodies provide.

I was really fascinating by the laser-cutting process, and wanted to integrate it somehow in this project. However, I found that there was really no need for it, as the panels are simply to large, and there would likely be no reason for raw edges of the fabric to be showing. Even if there were, most of the fabric that would be used in this piece is light, and would likely be singed by the laser-cutter, interrupting the cleanliness of form that Mercy's design hinges on. Laser-cutting might be considered for the patches, but I thought it would be both easier and washer-friendly to embroider them on instead, as laser-cutting iron-on patches would not hold up to machine washing and drying. 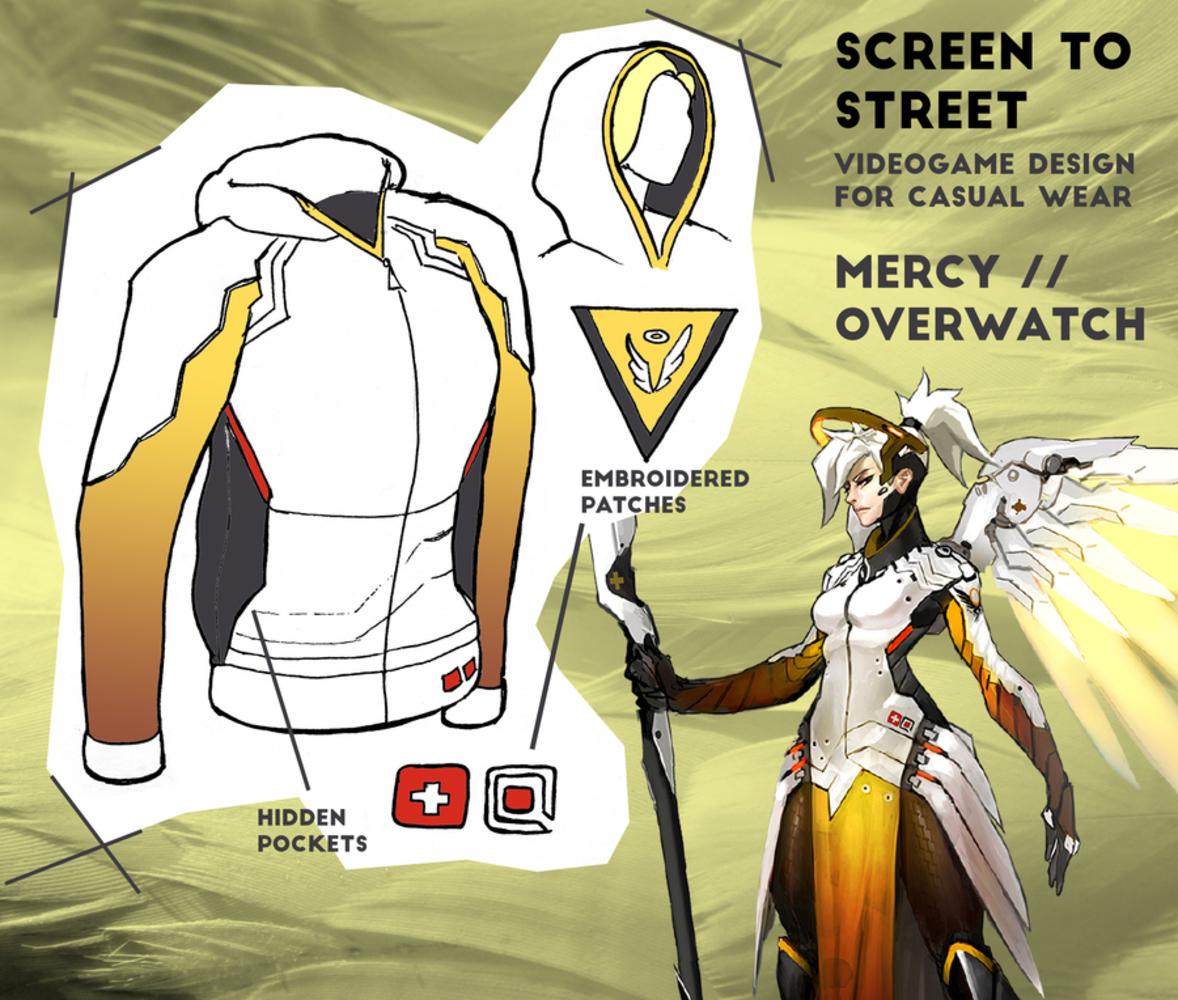 I definitely enjoyed planning out my piece and figuring out how everything fit together, as well as having the added challenge of blending extravagant design with sensible design. I wouldn't consider myself much of a clothing designer, but being able to put in the time to investigate how to create higher-end merchandise made me incredibly excited to try to actually create it, as it now suddenly seems attainable. As I couldn't before due to constraints regarding accessibility, I would have liked to experiment with different materials and how they interact with one another, as well as actually creating the pattern needed for this design, as it includes several non-traditional shapes that would need more fine-tuning for it to work. Even so, the knowledge and understanding of working with soft materials that Soft Fabrication gave makes me want to dive right in to experimenting more with this concept, and possibly produce a handful of other designs. 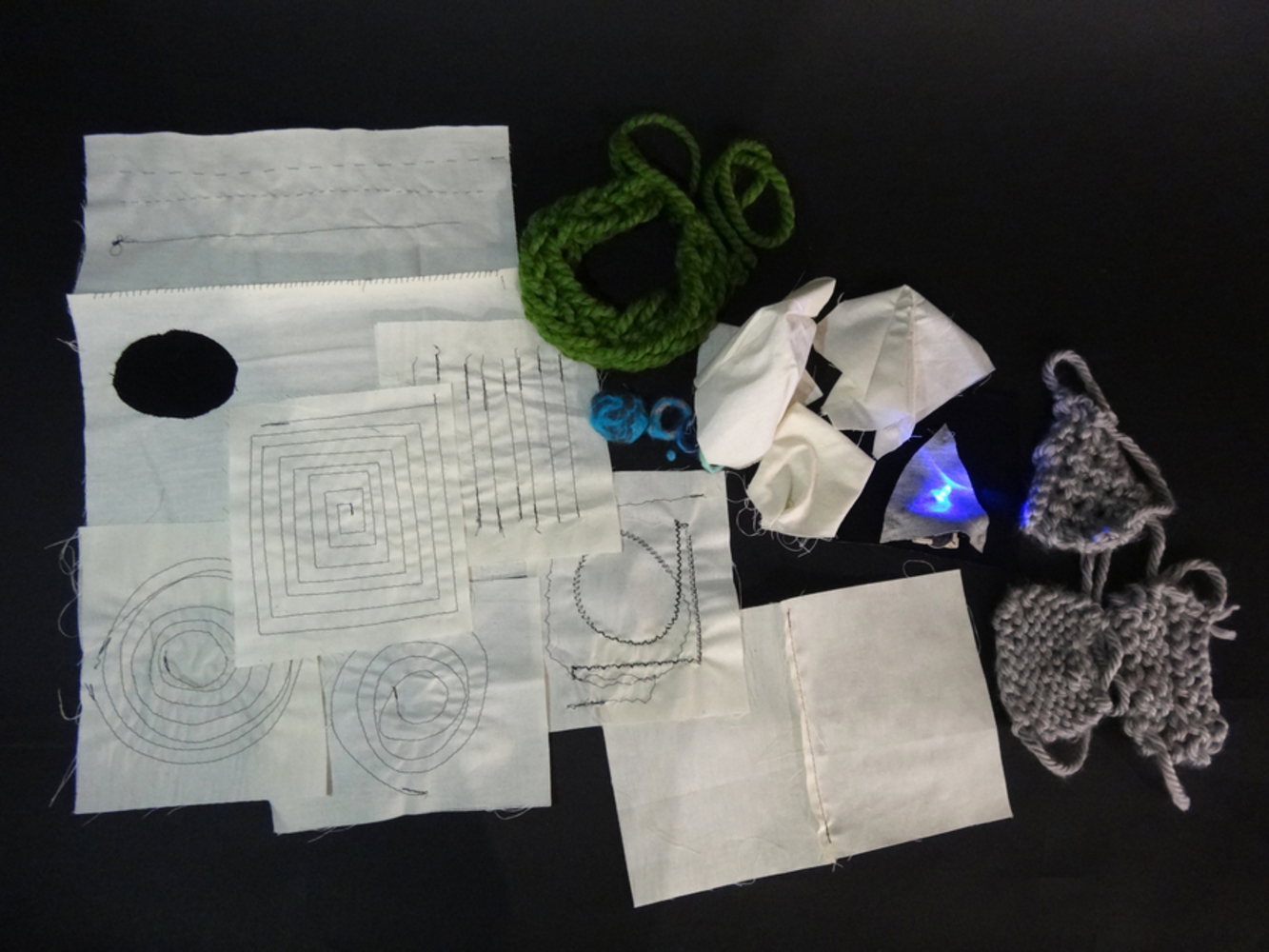 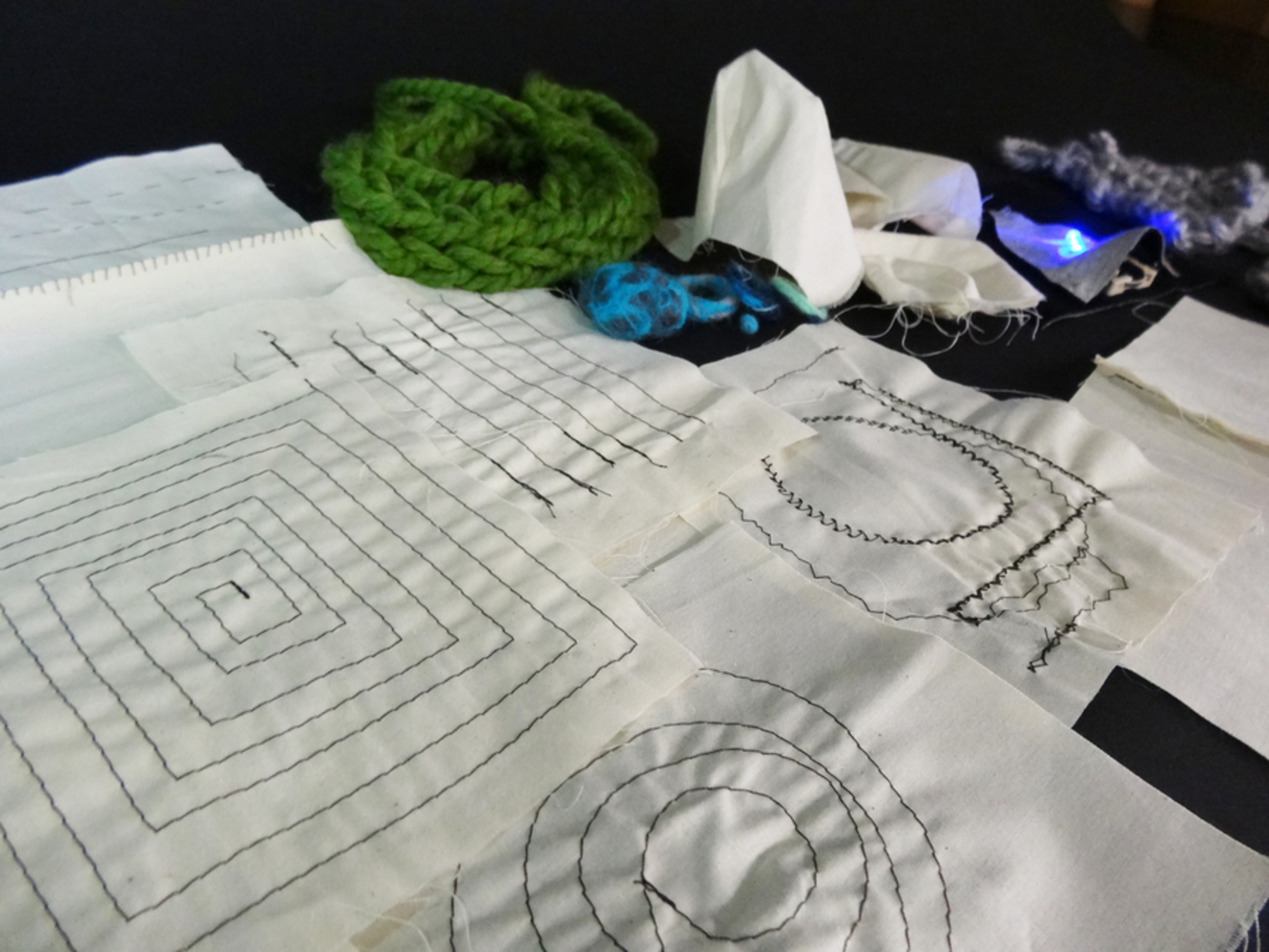 Translating the vivid aesthetics of Blizzard Entertainment's videogame, Overwatch, into casual wear that's both recognizable yet can stand independently of its inspiration.