Made by Brian Lai, Ariel Tian and Jacob Slone

Paul Klee was a Swiss born painter known for his unique style that transgresses multiple genres.

His painting experience began when he studied drawing and painting at the Academy of Fine Arts in Munich, after which he explored art independently. During this period he experimented with different styles including caricatures, Symbolist drawings, and works in black and white. His art reflects the influences of Pablo Picasso's Cubism and Robert Delaunay's abstract translucent color planes. Later on he returned to Munich and joined Der Blaue Reiter, a German Expressionist group.

One of the turning points of his artistic career occurred during his visit to Tunisia. The clear, natural light helped him develop a heightened sense of color to the point where he could use color for more than physical description, and led him down the path of abstract art.

Later on in his life when he returned to his hometown after teaching at various art academies, the dark political situation in Europe took a toll on him and eventually began to influence his art. "Lines turn into black bars, forms become broad and generalized, scale larger, and colors simpler," (Rewald).

Paul Klee's earlier works were most etchings created with a pencil and paper. Throughout his life, Klee maintained a sense of satirical humor in his artwork, as you can see in this example. Klee had a tendency to distort human bodies and faces to look both comical and a little disturbing. This particular work, and many of this other earlier works, has an underlying political message. The subjects are meant to be Emperor Wilhelm II and Franz Joseph I of Austria. One interpretation of this piece is that Klee is making fun of these two emperors because they each try to bow lower than the other in order to show greater respect than the other, which in turn makes both of them look like fools. Of course, the fact that both men are not wearing cloths only adds to the comedy of this piece.

However, Klee would soon abandon pencil and paper for other mediums of art. It was around this time that Klee gave up solitary work to join the artists of the Blaue Reiter. 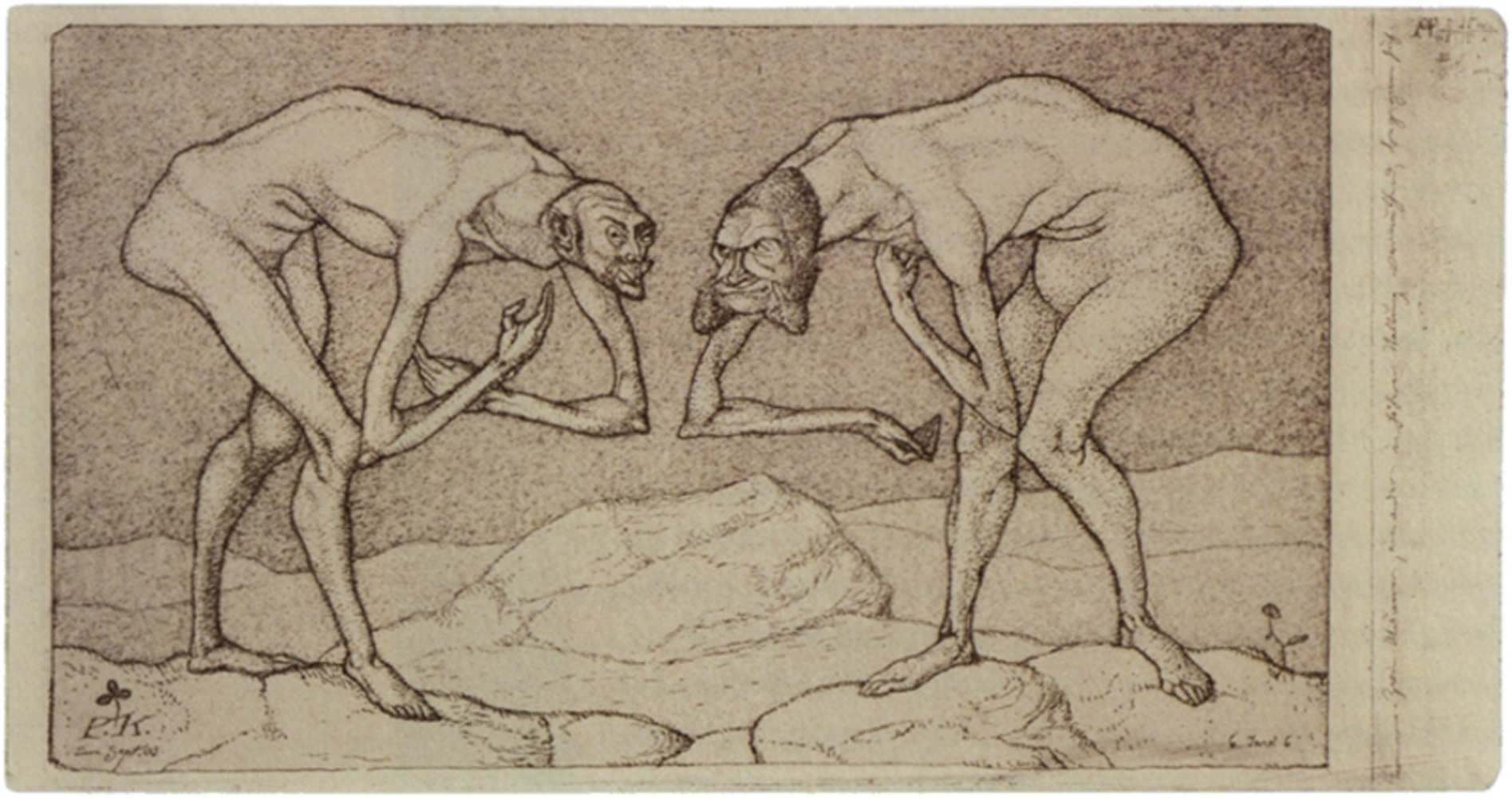 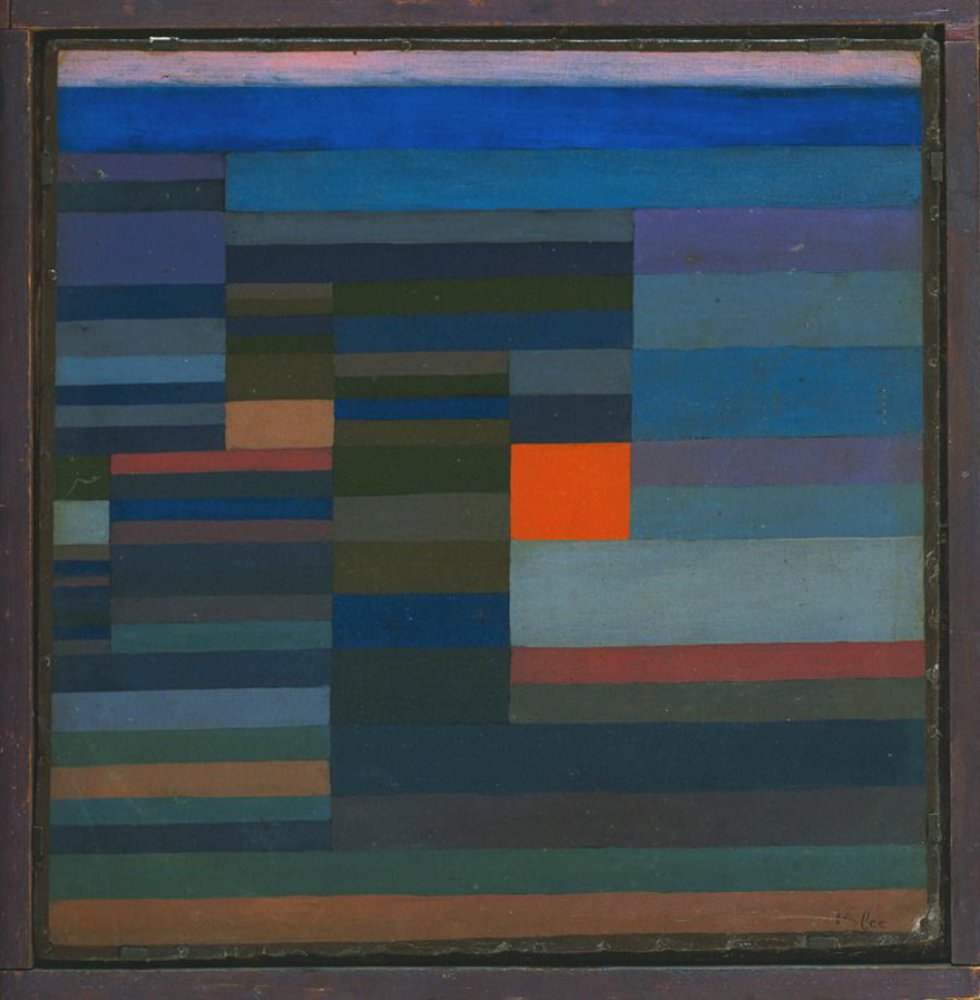 I was originally drawn to this piece because of the color scheme in the painting. My eyes were immediately drawn to the orange square slightly off center. From this center point, I immediately got the impression that I was staring at a darkening landscape with the red spot as the light source of the picture, maybe a sunset at sea. After reading the title of the work and realizing that it was about a fire, I got a clearer image in my head.

Fire in the Evening is considered as a variant of the "square paintings", and really reflects the strength of Klee's color theories and techniques. He divides the landscape into  rectangles that somewhat obscure the landscape that he is painting, but using the color scheme he is able to portray it in a way that is still decipherable to viewers. The differences in color from the top of the painting to the bottom help define a sky/horizon in the background and solid ground (brown, dirt colored) in the foreground. The color also creates a certain mood for the painting - the world feels cool, but there is a warmth emanating from the fire in the middle.

The shorter rectangles in the center also create vertical rectangles, and the gradients of colors within these rectangles work to create a sense of depth in the painting. 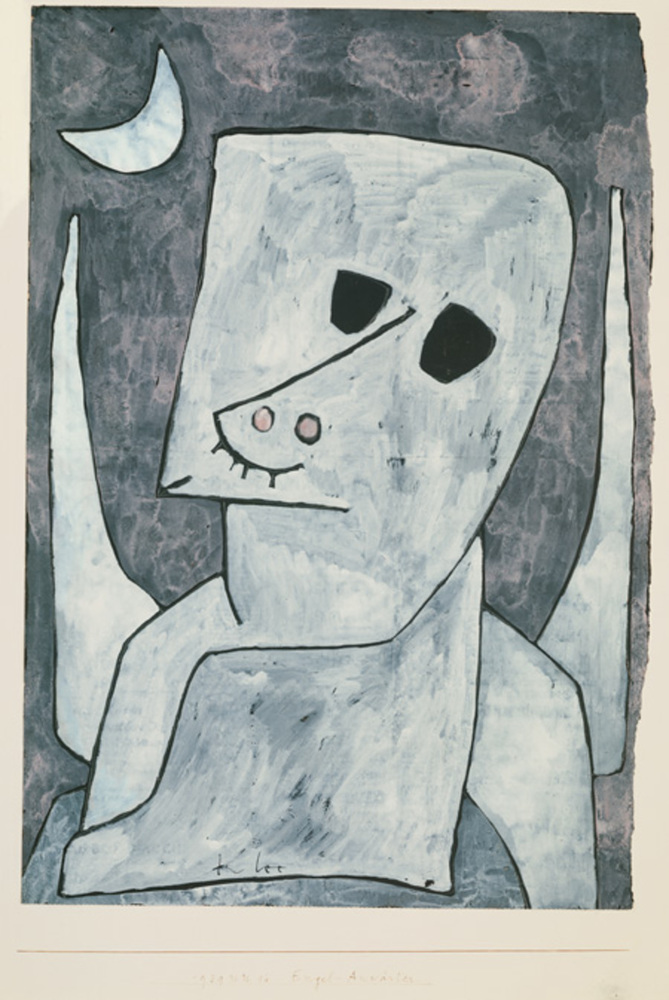 Among other of Klee's later works, this piece focused on death. Suffering from scleroderma, Klee created a number of works featuring misfit "angels", likely due to his own feelings about his disease and closeness to death. The piece is gouache, pen, and pencil on paper, a combination of tools from earlier and later in life. Holding true to his abstract style, Klee creates a strange, broken figure which remains oddly relatable. The pale, washed out color, pitch black eyes and broken form create an erie presence, but the round shape of the snout creates a sort of smile and the shape of the eyes feels gentle and calm, almost longing as they stare at the moon.