On the Moon: A Telltale Interactive Performance

Made by Nathan, Kaalen Kirrene, Katherine Martinez and Aliya Blackwood

We created an interactive live story, where each decision our actors made was determined by the audience. Beginning with two astronauts encountering an alien on the moon, our story was determined on-the-fly with short pauses in the action, during which audience members could use our web app to vote on the actions of the alien / astronauts. With each decision, the actors played out what the audience decided while music and sound effects played according to the mood and direction of the story.

The idea behind our project was to make a fun and interactive story similar to the iconic Telltale Games storylines. We wanted to let the audience experience something more interactive than watching a play (like the Wizard of Oz performance shown in class), but we decided to take it a step further, asking the audience to direct the performance as it played out. The audience's collective decisions made a real impact on the storyline and had irreversible consequences.

Our finished product is an amalgamation of the classic Telltale storyline and the interactivity of the Wizard of Oz performance we saw in lecture. While Telltale Games makes story-driver games that focus less on action and more on characters and interactions fueled by meaningful player decisions, the Wizard of Oz performance swept aside the convention of a phone-free performance by enhancing the experience with augmented reality. In combining these two thoughts, we created a choice-based system that would impact the story like a Telltale game with an interactive component like those of the performances we studied.

Our story went through many iterations as we developed it. As both the aliens and astronauts made a binary decision at each "node" of our story, adding one layer of depth (another question) multiplied our number of outcomes by 4 each time. That, combined with the 4-minute performance limit, led us to decide to keep the story short. As we wanted the decisions to actually matter during the performance, there are many possible outcomes; the alien and astronauts can get along, both live, or everyone can die.

Originally, we had each decision pair (astronaut and alien) leading to a completely different scenario, but even at one choice per minute (so 4 decisions), we would end up with 4^4 (256) possible outcomes. Hence, we decided to loop the story back in on itself, collapsing similar scenarios together to make the storyline more manageable.

Our medium of creating the story also changed. We originally started with a flow chart (shown below), but quickly needed more context for each decision than a bubble or arrow could provide. We then used a Google Sheet and eventually a recursive JSON object to represent the storyline. 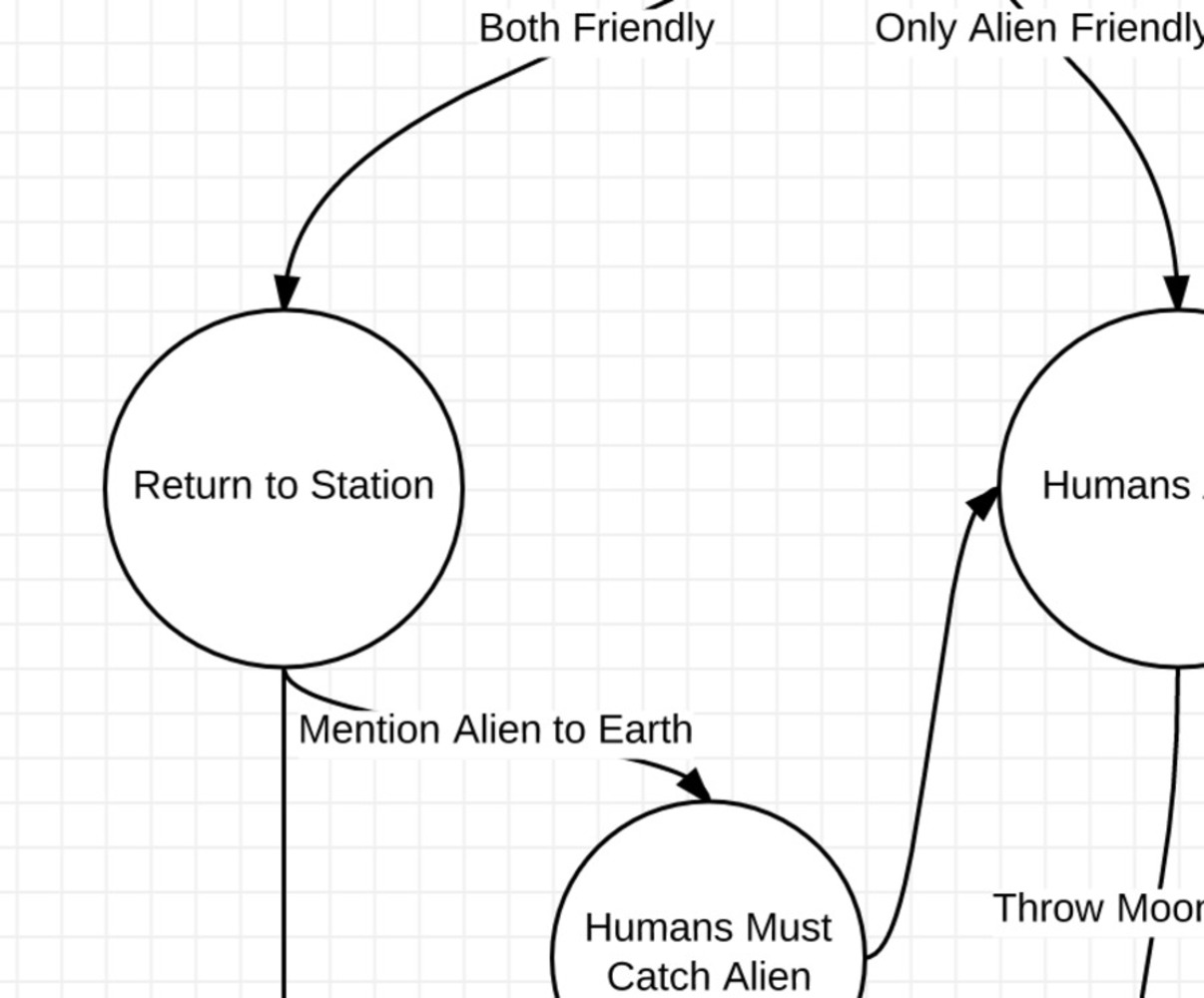 Another facet of our project depended on the technology behind our branching storyline. To create a live interactive experience, we created a Node.js server that created web-socket connections with each and every user, pushing updates (such as new questions and story changes) to the client and letting the client message back.

Written from scratch, the server and front-end work together to form a two-way communication on which the direction of the story depends. During voting times, the server accepts messages from each client, tallying the results after 20 seconds and alerting the actors which direction to take.

Overall, the project was a success -- the audience interaction was strong and the two play-throughs in class led very different directions without technical issues. However, obvious challenges arose from such a complicated storyline; we could not practice the performance as it would play out in class. In addition, performing at a later date would have allowed us to study the script more to respond more quickly to storyline changes.
x

I really like the interaction of your prohect, and I am amazed by the web app you made. It was a brilliant idea to use webpages to get people involved, and your story was fun.
Nevertheless, I think the story can be more interesting. Maybe you could think more in the endings. But it is so amazing that you did that much in short time period. Awesome!