Made by Kim Lister

I found a book called Libera Viva which features photographs by Elizabeth Holzl of an old hospital in Italy that has been abandoned to nature and become overrun with plants.

The introduction has this to say about the meaning of the photographs: “Small details are identified in the vast structural spaces of the Leonardo Bianchi, and these restore something of the mystery that still shrouds a building that was at one time so imposing and powerful. The state of abandonment is brought to the fore, a state in which the strength and power of the past are mirrored in the vastness of the decay.”

Elizabeth herself says that “the vegetation takes back the space and becomes a metaphor of the victory of life over restraint.” 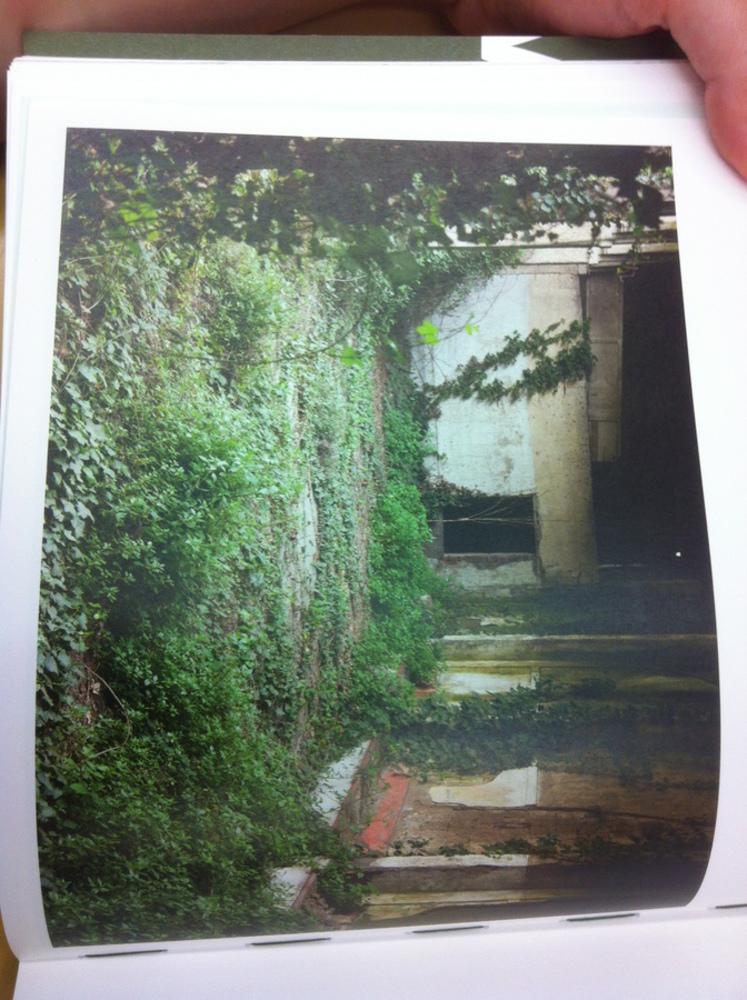 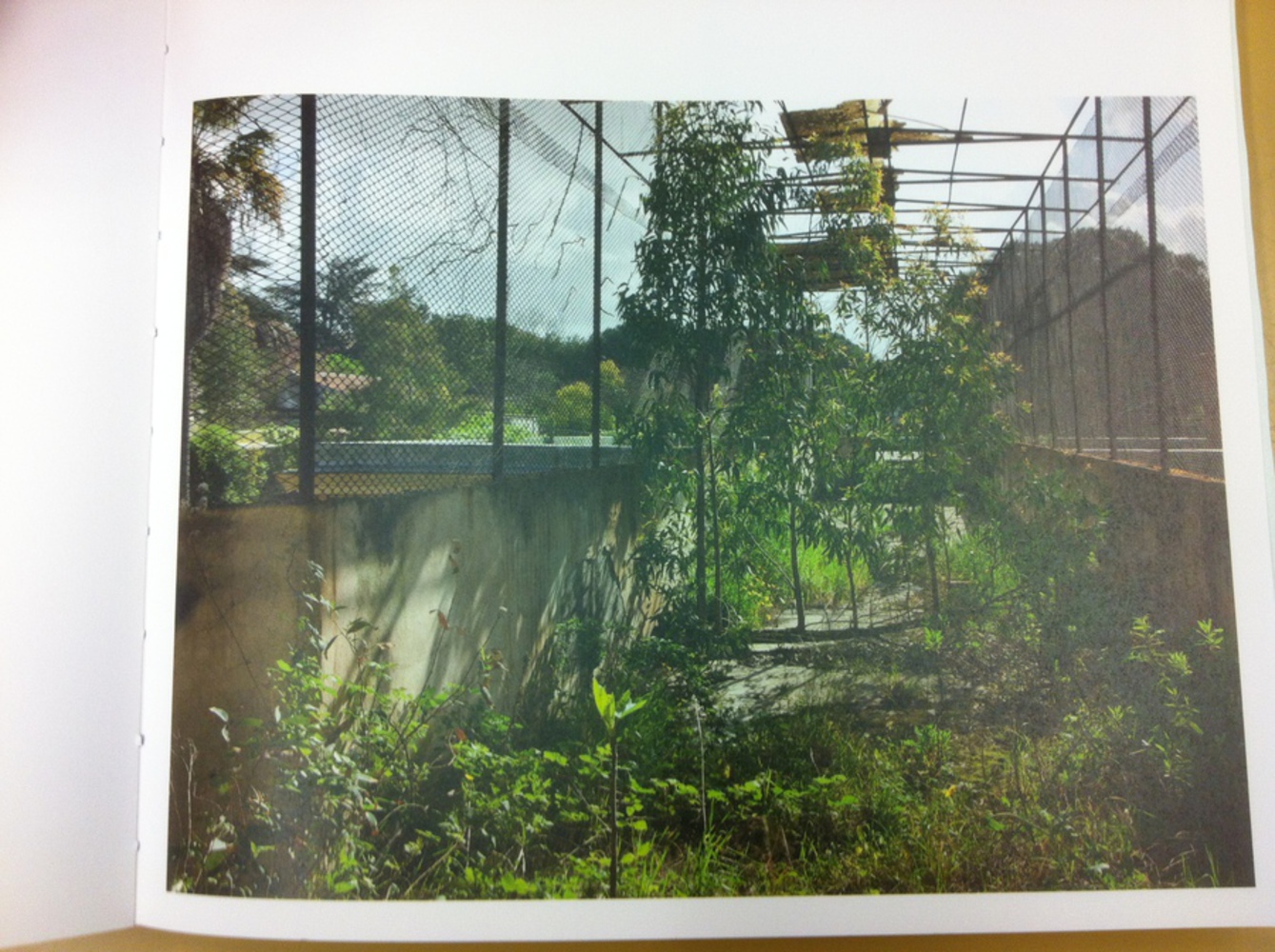 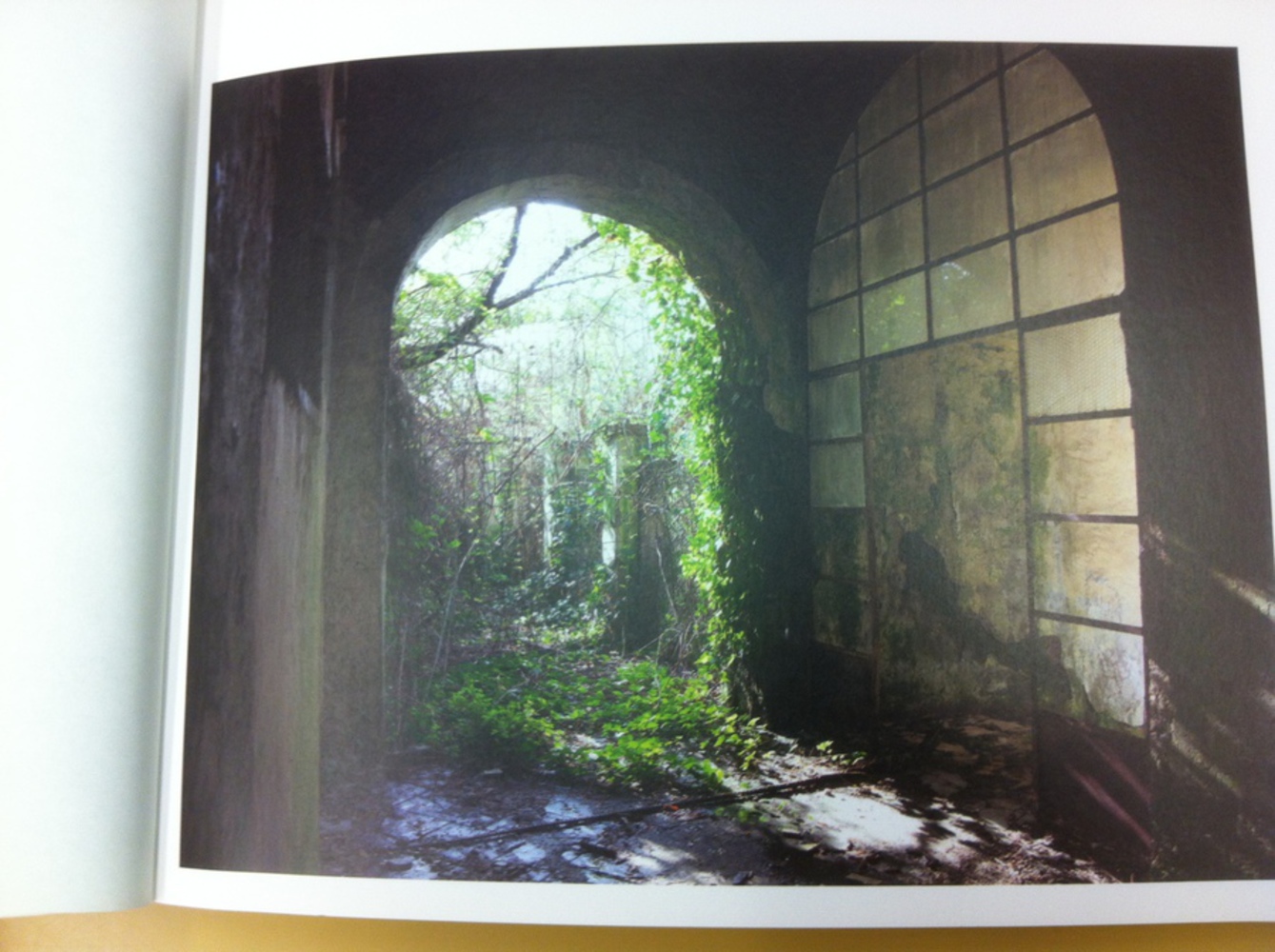 Top photo: An open side of the building covered with ivy and assorted brush. There's greenery in the foreground while the concrete walls take up the background, with a dark doorway in the very back. The subject is mostly the empty space that the vegetation is slowly filling. Light filters in through openings to the left just out of view. The light is balanced because it enters from the left and then reflects off the blank wall on the right.

Middle photo: A concrete ravine with chain link fence on both sides, and weeds and small trees growing in it. The foreground is the vegetation in this ditch, the background is the landscape around the site (trees, thicker foliage). The walls slant more right than left, leading the overall composition to be not quite symmetrical, but fairly balanced since there are similar features on both sides. It's shot outside, with sunlight coming from approximately overhead.

Bottom photo: Taken from inside a building looking out a large archway, with plants growing outside and creeping in. The bright doorway on the left contrasts with the dull, broken, flat one on the right, juxtaposing nature with manmade structures. Shadows are cast through the doorway onto the floor inside, in the foreground.

I love scenes in which nature has reclaimed areas once inhabited and built up by people, so that's what mainly attracted me to these photographs. It reminds me of entropy, the poem Ozymandias, and trite sayings like "Time heals all wounds."

All the photographs were shot with natural light, apparently in early winter. Using sunlight is appropriate, given that the manmade features of the site have been given up to nature. The quality of the light is very neutral--not particularly warm, as sunlight sometimes is, because she's not trying to portray nature as benevolent, but rather as an inevitable force that merely exists and can only be delayed, not avoided.

The spaces are mostly filled with greenery over ruins of old structures, showing the new life engulfing and burying the old.

The shots tend to be down corridors, through tunnels, or even just along walls as the middle one above is. I feel that somehow this also shows the progression of time, in a way; when gazing down the hall, you are looking into the past or the future, or perhaps both.

The photos also aren't overly composed; she found interesting views, but mostly shot them as they appeared to anyone who might come by. Since these places are abandoned, she doesn't need to go to any great lengths to find a perspective others haven't seen.

For more examples from Libera Viva, go here (must use andrew account): https://drive.google.com/a/andrew.cmu.edu/folderview?id=0ByNdHBj2861ySzlJOXFfTFo5N0U&usp=sharing

Overall, my process for shooting the "replica" images was to make a circuit of part of my neighborhood in Shadyside and the route I take to campus looking for anywhere plant life had built up, and especially areas that seemed somewhat abandoned or just dilapidated like the the hospital in Libera Viva. 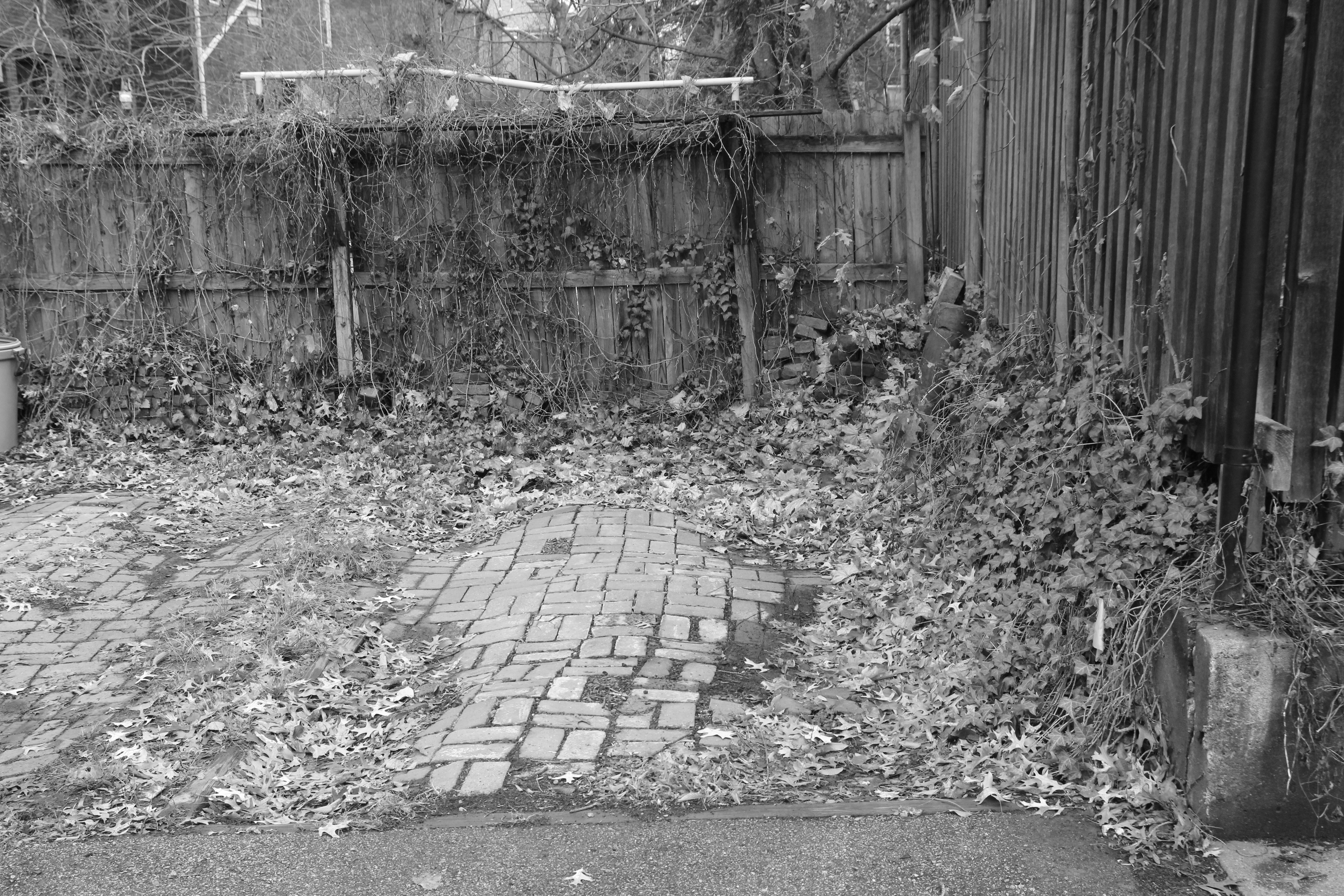 This shot is slightly angled, which was an accident; it's the closest picture I have to a straight-on shot of this overgrown corner. It's a parking space and you can tell from the depressions in the brick where the wheels have pushed in the weight of the car over time. Fallen leaves gather in these spaces, which evokes the theme from the source photos: nature filling in the empty places left when humans inhabit a space and then vacate it. In this same vein, vines surge over the fences and through the slats between posts. The ivy, too, is common to both photo sets. I was fortunate that it's still green and lush while almost all the other foliage has shed its leaves, making it difficult to shoot similar subjects as the source images.

I feel this is reminiscent of the Holzl pictures. It shows a roughly rectangular space open on the left, like the first image above. It also pictures recognizable ruins of human structures being covered and overwhelmed with plant life, and you can peek over the fence to find a busy muddle of plant and structure off in the background (as in the third image above, but through the doorway). The whole scene is in focus, presented "as is." 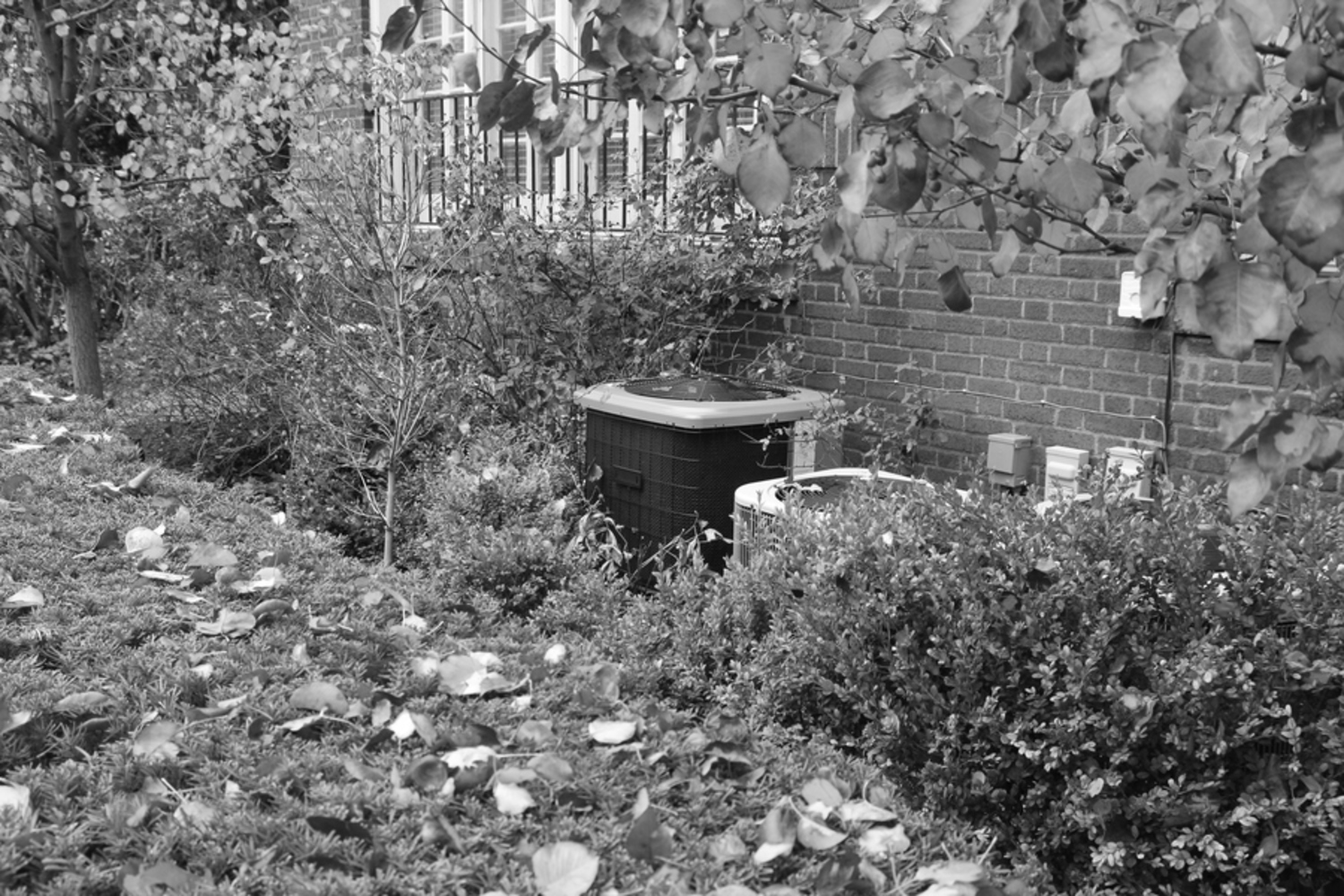 Although the Holzl photos didn't typically have objects so immediately in the foreground as the hedge here, I think this shot also evokes those pictures by showing a small, room-like space dominated by plant life. Although this is a garden and more carefully tended than the natural vegetation in Holzl's compositions, several aspects still give this the right air of chaos: the loose leaves caught in the hedge, the confused tangle of shrubs in various stages of shedding their foliage, the branches creeping around the AC units.  The angle of the photo doesn't quite match Holzl's usual approach, but it was necessary to exaggerate the disordered appearance of the bushes. 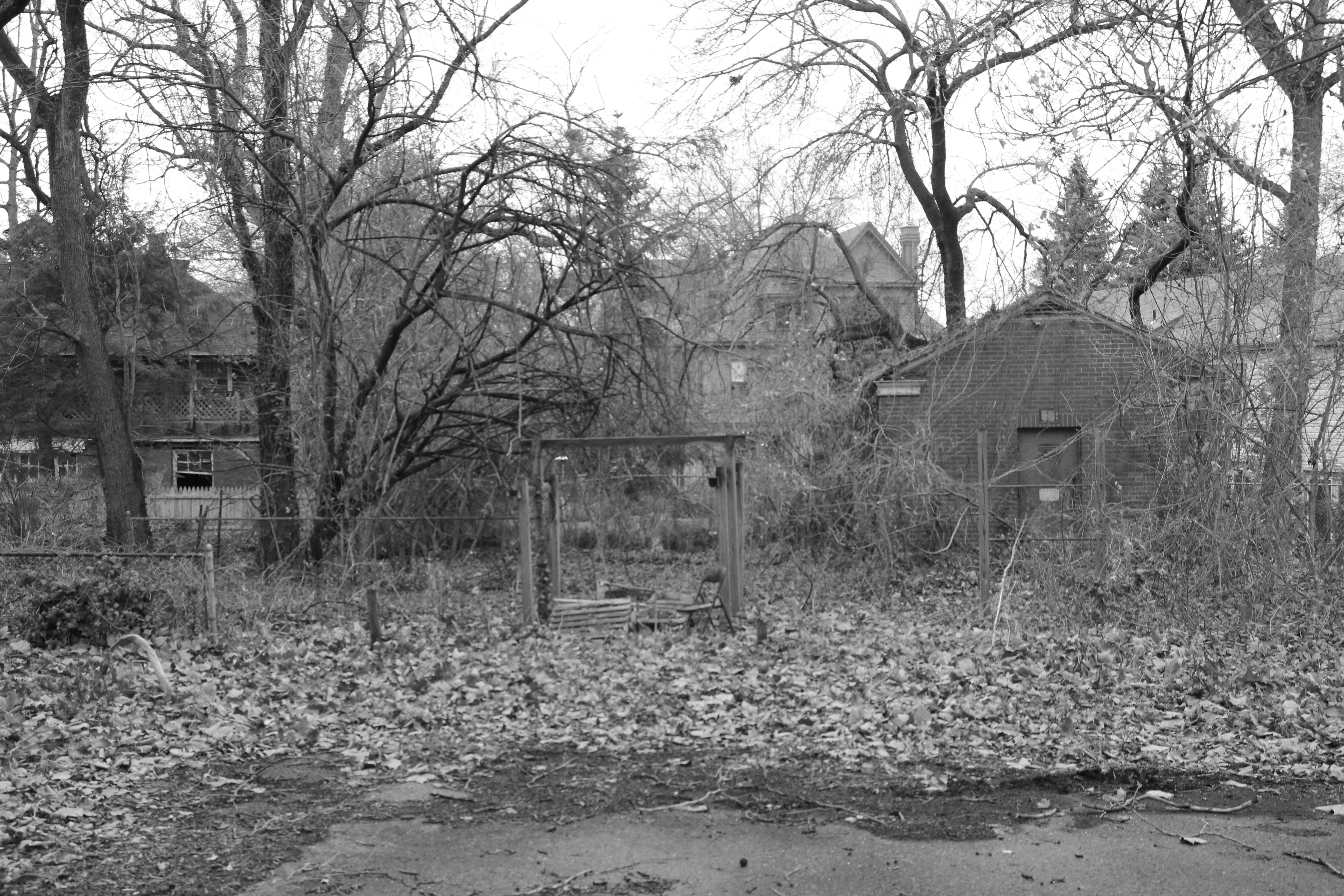 This shot and the next are both from a lot that appears to be empty (a "for rent" sign stands in front, and has all semester), and was thus the perfect place to imitate the abandoned hospital of Libera Viva. I believe the center object here is a dismantled porch swing, and a rusted folding chair sits next to it. While this view at first seems similar to those presented in Libera Viva, I believe a few details give it a different meaning than what the source images convey. In Holzl's photographs, healthy green plants overtake run-down structures; in this scene, while the structures are indeed shabby-looking, the plan life looks even more dead and decaying. Also, the door in the rightmost third is closed, whereas the Libera Viva photos typically feature open (if darkened) doorways and archways. (A window on the left is open, but is too much in the background and not placed prominently enough in the overall composition to draw attention.) This seems to present a much more pessimistic view, not the open-ended future suggested in the photos above. 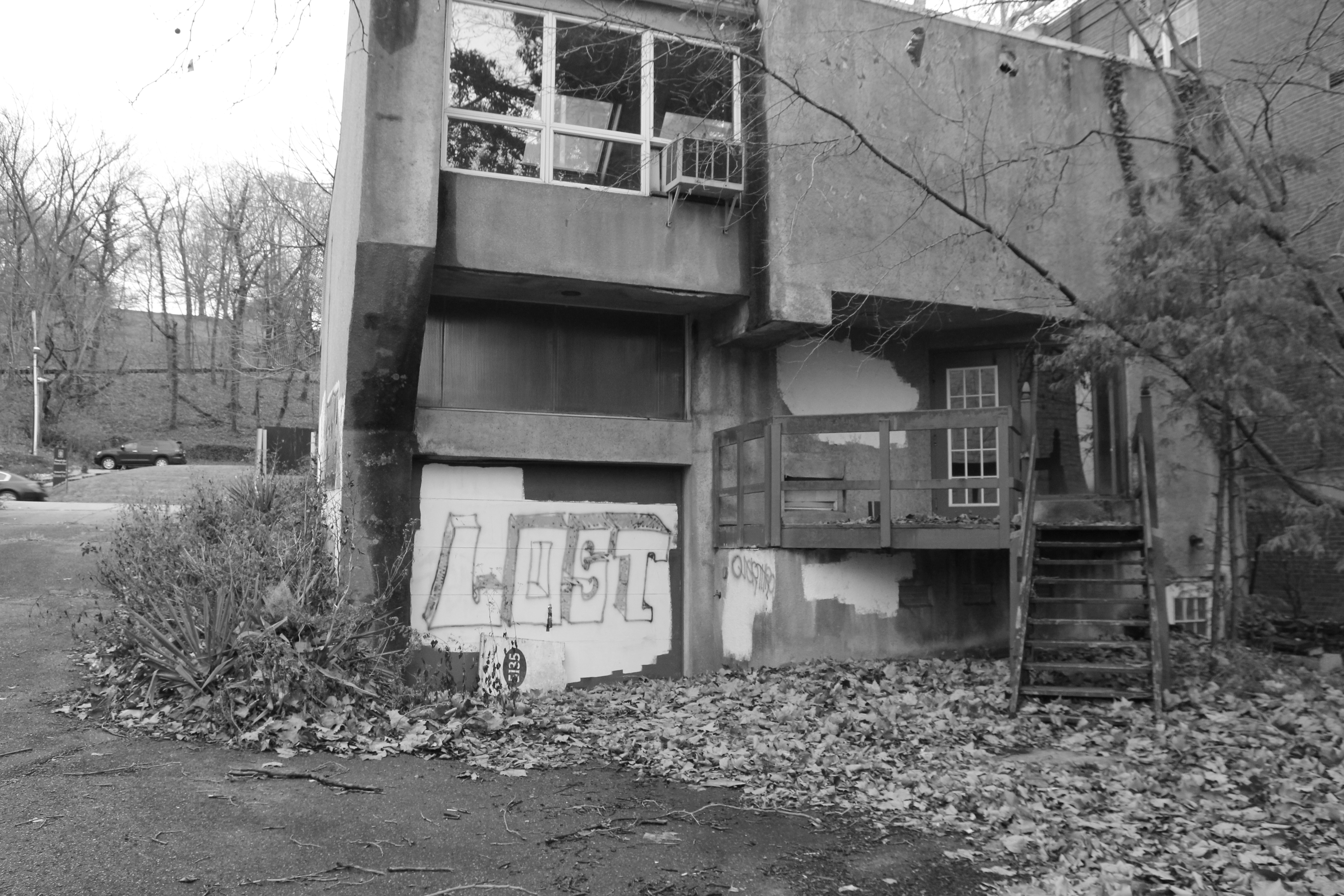 Another photo from the abandoned lot. Though not featured in the three pictures I chose, some of Holzl's compositions feature graffiti on the walls of the hospital, so featuring this message doesn't break with the source material. Like the open doorways mentioned in the previous description, the stairway here offers a way up and out, while the yucca on the left and trees/ivy on the right bring back some of the greenness the previous shot lacked. Though it's not quite as overgrown as the source images, the patchy paint, lichen-stained surfaces, and jumbled geometry still give it the same abandoned/chaotic vibe as the Holzl photos. On the left, the bright sky washes out the tips of the tree branches so that they begin to blend together, as in the third shot above. 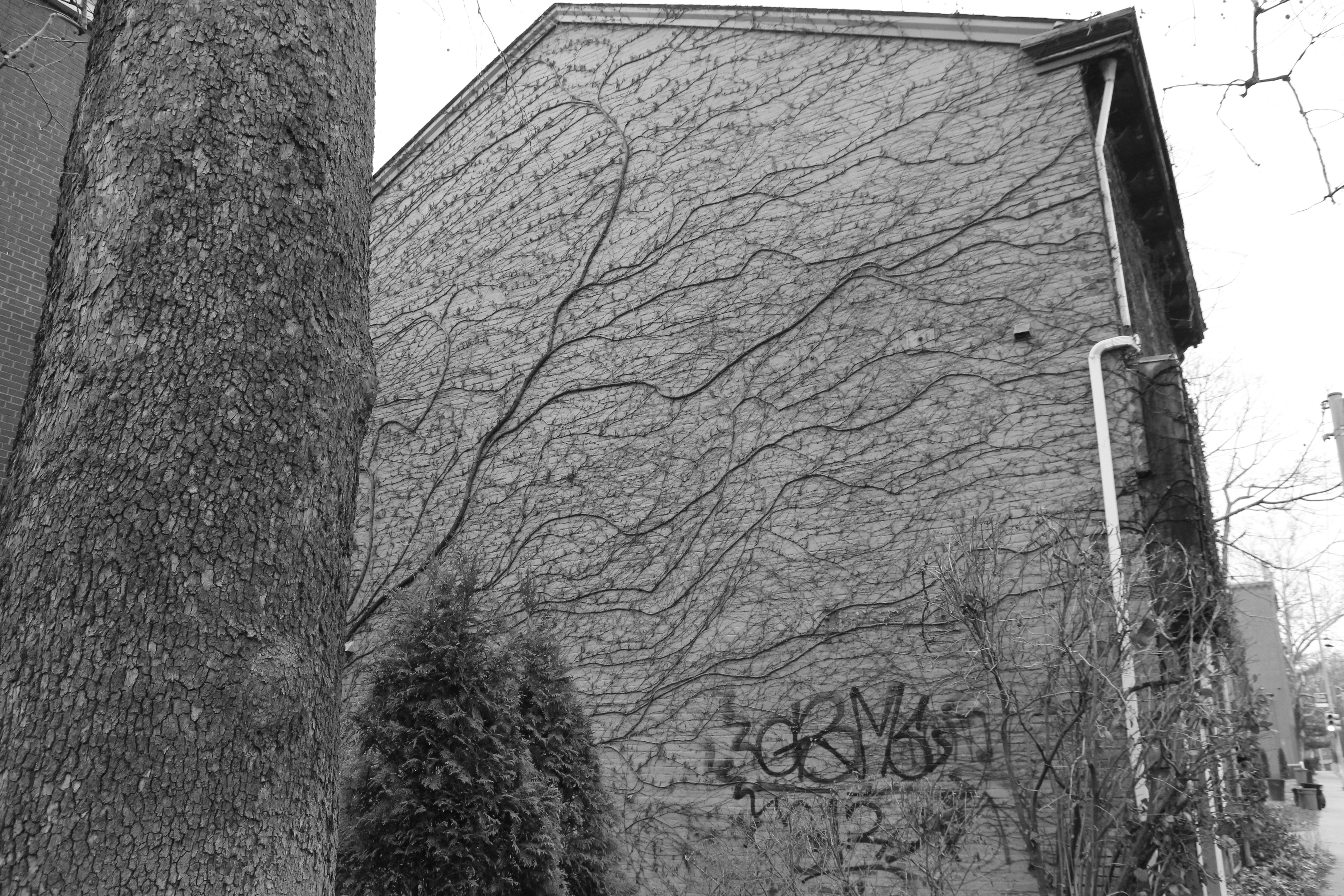 The graffiti is the only part of this shot that suggests rubble/decay of manmade structures, but the thoroughly ivy-covered wall succeed on its own in making the pictured building feel overgrown. As with the hedge before, the tree trunk on the left is probably too close to the viewer and obscures some of the image, but this was the best perspective available for this shot without stepping into the busy road. I do like that it makes that left portion feel as busy as the street shot on the right, nicely balancing each other and framing the relatively simple vine portion. 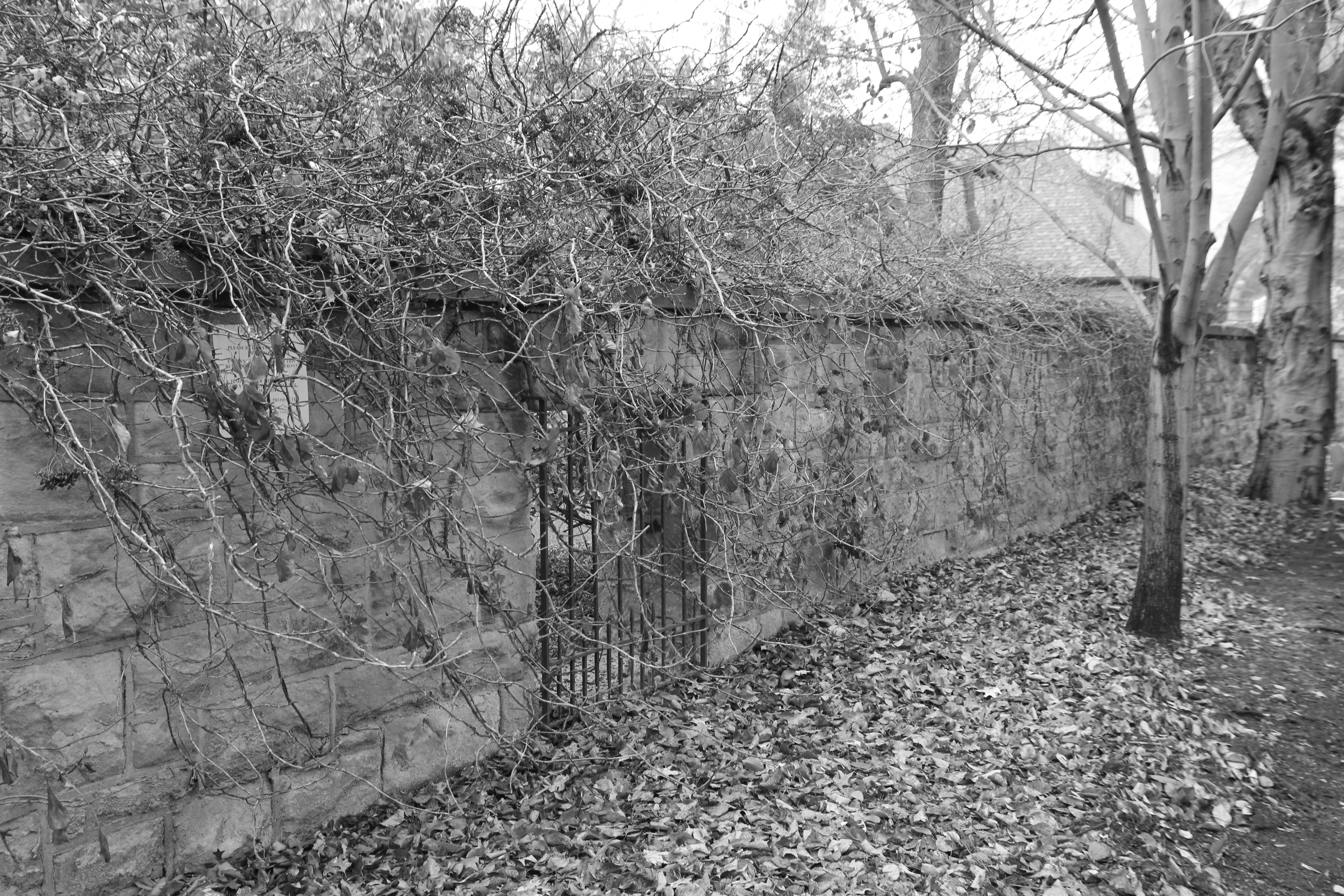 This shot is from the courtyard of Mudge, the mansion dorm on Morewood Ave. The tangle of vines piled over the short wall almost meet the dead leaves piled at its base, covering the entire structure in plant matter of some kind. Again, there's a doorway, and although the gate is closed it serves as an open window to the plants beyond. It's unfortunate the far tree is out of focus; I didn't notice until uploading. To be in the same style as the source photos, everything should be equally presented. The angle is right, though--looking down the wall just as in the second photo above.

All photos taken for this assignment can be found here (must use andrew account): https://drive.google.com/a/andrew.cmu.edu/folderview?id=0ByNdHBj2861yeHZ0Ny1ab2h0bXM&usp=sharing