Made by Austin Garcia

A choice game is streamed to window projectors along the Google campus bridge. Environmental sensors alter the in game environment experienced by those near and inside the bridge.

The Stadia Skyway is an interactive experience driven by the projection of a choice videogame on the windows of the bridge streamed through Google’s new product Stadia. Stadia processes and renders videogames in the cloud and streams them to your device, allowing for simple computers to run graphically intense games.

As pedestrians walk up the street toward the bridge, the glazing along the two stories can be seen displaying a living environment from Destiny 2, one of Google Stadia’s flagship games. The world can be seen to be vivid and living, live streamed from a special camera left in the games environment. For this specific version of Destiny, however, the controls are not a keyboard, but rather environmental input from the local weather, local ambient noise, and pedestrian input. These inputs make various changes in the game world. The local weather determines the in-game weather displayed. Local Ambient noise (such as cars passing by, birds, etc.) is translated into data determining local sounds like trees rustling and wind howling. Finally, pedestrian input, both sound and touch (with sensors placed near the bridge and labeled as interactive pieces) determine specialized events such as a squadron of adventurers passing by in the distance, or a spaceship taking off from behind a mountain range. These sensors exist only below the bridge, allowing everyday people to mildly affect the environment of google employees who so constantly affect our daily lives.

From the perspective of an employee, the bridge would be a pleasant, immersive, dynamic environment through which they could stroll casually or even sit and be taken to another world momentarily during their busy day. Consideration is given to the employees by not allowing environmental input to become hectic. To do this, a cooldown timer is set for all events depending on how intrusive they may be. For example, the cooldown timer for the sound of rustling trees is much lower than that of a spaceship take-off. 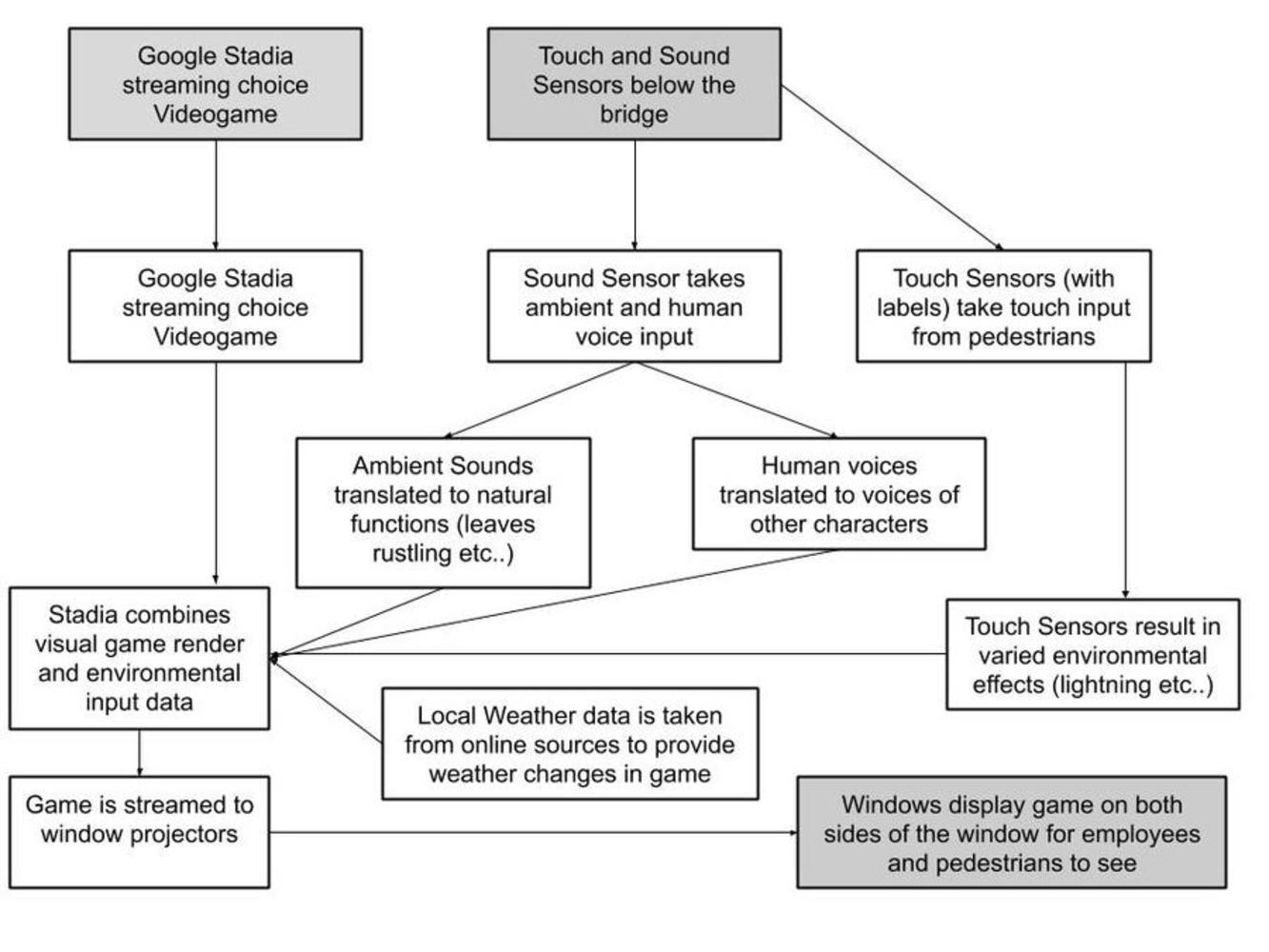 A choice game is streamed to window projectors along the Google campus bridge. Environmental sensors alter the in game environment experienced by those near and inside the bridge.