"Borrow" the concept of the talent television show, "the Voice" to make a statement on anti-abortion laws and the controversial debate on Planned Parenthood.

My intention was to make a statement about the current controversial debate on Planned Parenthood and abortion. By borrowing the concept of The Voice, I called this The Choice, and wanted to pose the question of who was making "the choice" on whether women receive abortions. The goals of this project were to make my point clear and to have a striking message that would leave the viewer to consider the power relationship between congress and the individual. Though the viewer can and should have their own interpretation, my intent was to pose the congress in a unwilling position of authority, with their backs turned to the individual, as if it was their choice not hers. Only if they turned their chair around, like on The Voice, would the choice go to the individual.

The Voice: The television show is based on the concept that vocal talent should be judged by listening alone, and not by visual judgment of the person singing. The four coaches will turn around only if they are willing to accept the contestant on stage into their team and have them on the show.

The controversy: There has been rising debate in the media over the legality of Planned Parenthood, an organization focused on reproductive health resources and information. From this, resurfaces the controversy of abortion, and whether it should be allowed. Visually, I "stole" the Planned Parenthood logo, which appears on the shirt of the "contestant" woman on stage. 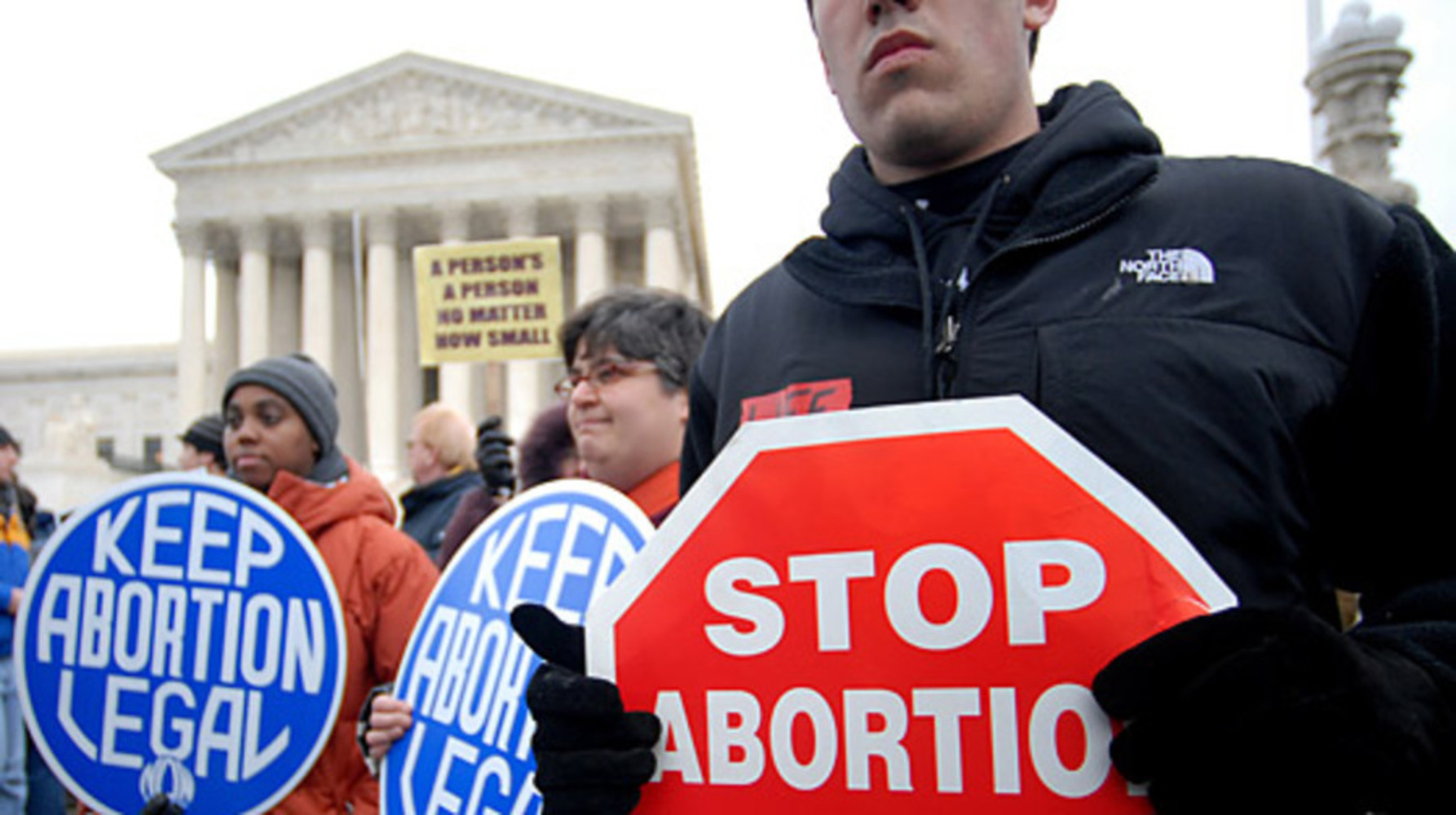 I first approached the exercise with the perspective of "selling someone something". With my eyes fixed on the extra credit, I thought it would be great to borrow or steal an artwork, and then make a visual pun of it, and then slap the design on a mug or t-shirt. But with closer focus on the considerations, I realized that I wasn't really breaking any rule. Maybe bending some terms of copyright (which is also unwanted), but I wanted to break a rule. With puns still in mind, I came up with "The Choice" as a spin-off of "The Voice", and decided to make a statement. I hoped to break the rule of having your work be well-receipted by all.

I used gimp, for the first time, and used it to crop and make a collage of images found on google images. I found the pro-life members of congress through this website: http://www.sba-list.org/node/2606

I found personal difficulty making something that could be received as having a very one-sided opinion. I was challenged to make a statement, using my personal opinion instead of keeping the peace like I usually do.

I created a juxtaposition of the controversy and a spectacle of judgement. I wanted to mix the judgments on the controversy, with the judging process of The Voice. I used GIMP, for the first time, and created a collage of congress members, and images implying pregnancy (e.g. the pregnancy tests layered over the microphone. I used the "lasso" tool to cut out each image layered on top. Some colors were added to blend the layers in with the background. I changed "The Voice" in the background to the "The Choice" by selecting and copying other areas of the existing word. 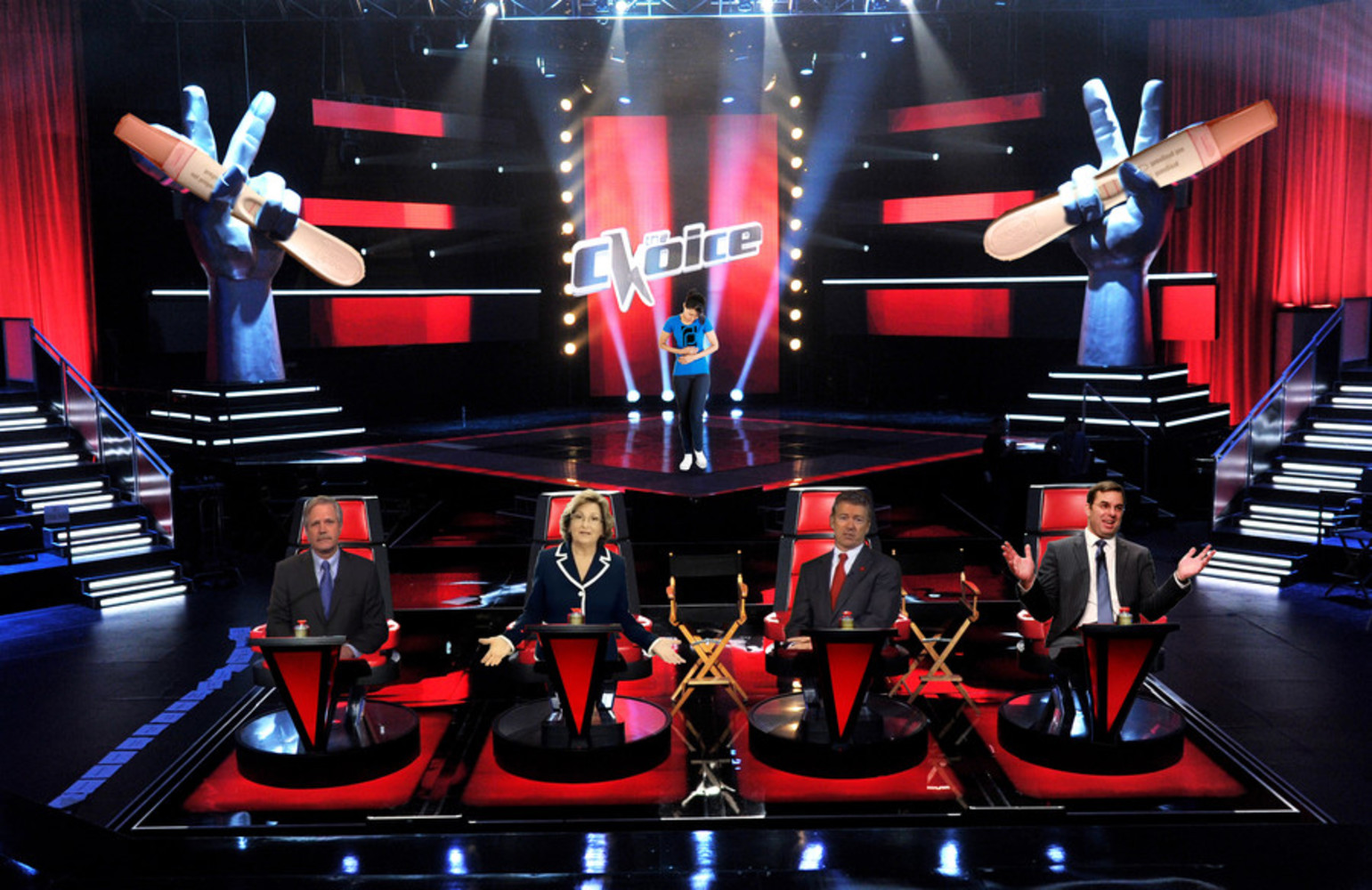 The main focus seems to be on the four congresspeople, leaving the girl on stage to only be noticed after them. The colors are a harsh red and black. The contrasting colors go with the theme of contrasting views and controversy. The picture space is deep, but a little shallower with the introduction of outside photos pasted in there like a collage. The woman on stage is in the center of the picture, but since she is in the background and looking down, she is less noticeable.

Together, this creates a striking setting for the political theme, drawing multiple points to light. The citizen has been put almost subservient in the background, and the main focus is on the politicians. By highlighting the judging and deciding aspects of The Voice, it implies that the decision has been taken away from the individual whether or not to use the resources of Planned Parenthood, including abortion. The unsmiling faces of the congresspeople give the impression that they are supposed to be disliked by the viewer, juxtaposed to the innocent-appearing body language of the woman onstage. The intent matched the outcome, as I've made a statement about the current controversy by borrowing from The Voice.

On the technical side, I learned a great deal about the tools of GIMP: lasso, scale, rotate, erase, etc. I also learned how to create meaning behind a work. In the past, I only went so far as to represent ideas in objects of a picture or music. Instead, I have attempted to make my own statement.

I would develop my editing skills in order to make the composition visually more professional. Something I would do differently as well would be to juxtapose it next to an image nearly identical, except the congresspeople are judging the validity of gun regulation laws.

"Borrow" the concept of the talent television show, "the Voice" to make a statement on anti-abortion laws and the controversial debate on Planned Parenthood.