Outline your approach to the project? How did you approach reworking of media in a collaborative way? What challenges were encountered and how did you resolve them?

I think there's a fever of cat culture today. Cats are mysterious and independent, which is really attractive to humans. Many cat lovers and owners have no dignity in front of kitties and try to please kitties by obeying to whatever they needs. Therefore there are often jokes that one day cats will rule the planet. That's how I came up with the idea of creating a poster of cat leader in the context of the world reigned by cats. 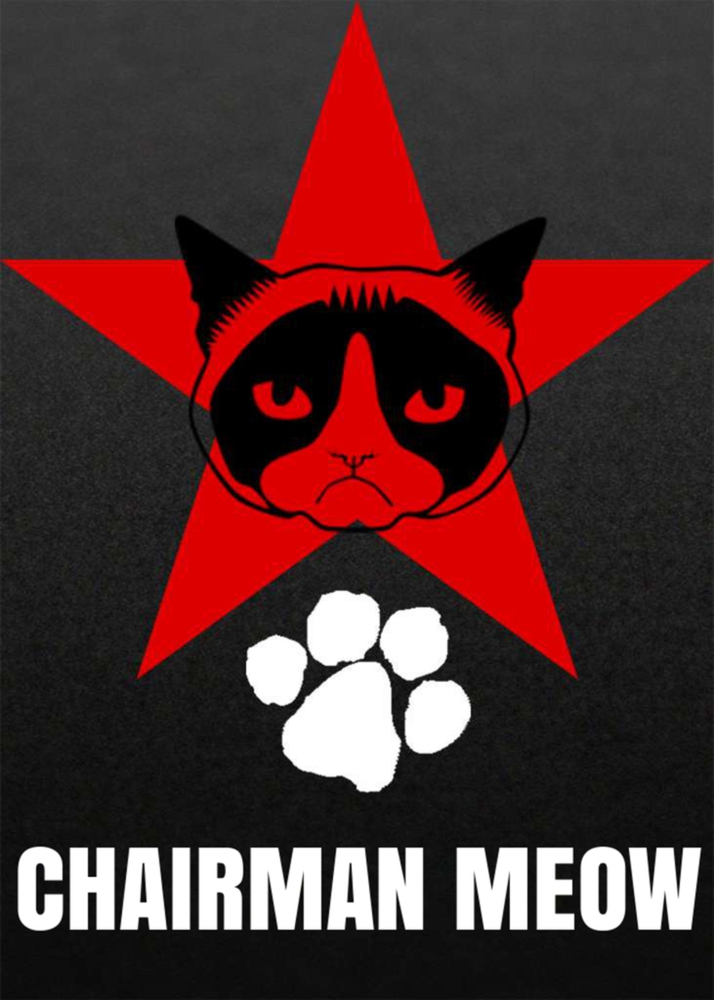 Once I saw the original Chairman Meow, the thought of grumpy cat represented as world leaders with bad reputations spoke to me on a personal level. For my recreation, my first thought went to Josef Stalin, though I couldn't think of a good pun about cats for the text. My thoughts then went to Idi Amin, dictator of Uganda, which could be Kitty Amin, but I thought he may not be well known enough for people to get the joke, and there weren't many good symbols about him that I could find, as the star represented Mao. Finally, I went to Hitler, whom I originally planned to parody as Catdolf Hitler, though this seemed clunky. Then I remembered memes in the past of Adolf Kitler, which I used.

In creating my meme, I made sure to use as many elements of the original Chairman Meow as possible, including the background, the specific shade of red of the star, the grumpy cat outline, the font of the text, the paw print, and the relative size and placement of everything, making the memes feel like they had continuity. The only difference was the shape of the symbol behind grumpy cat and the text. 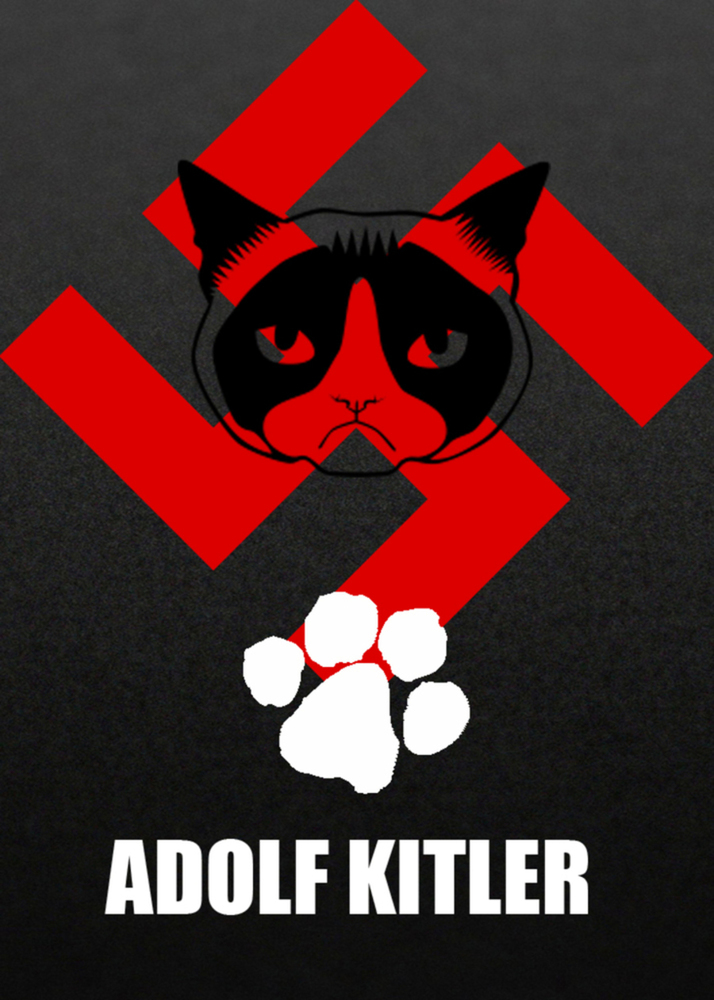 The poster of Kitler reminds me of WWII, and another popular meme featured on WWII. “Keep Calm and Carry On” was one of three posters designed and printed to rally the population of Britain for war before war was even declared. This is the only known collection of the original 1939 poster whose iconography has become ubiquitous over the past few years both in its original form and in countless parodies. Different from the original poster, which is optimistic and encouraging, the poster I created also corresponds to the theme of "Cat Rulers" and intend to convey a sense of pressure. 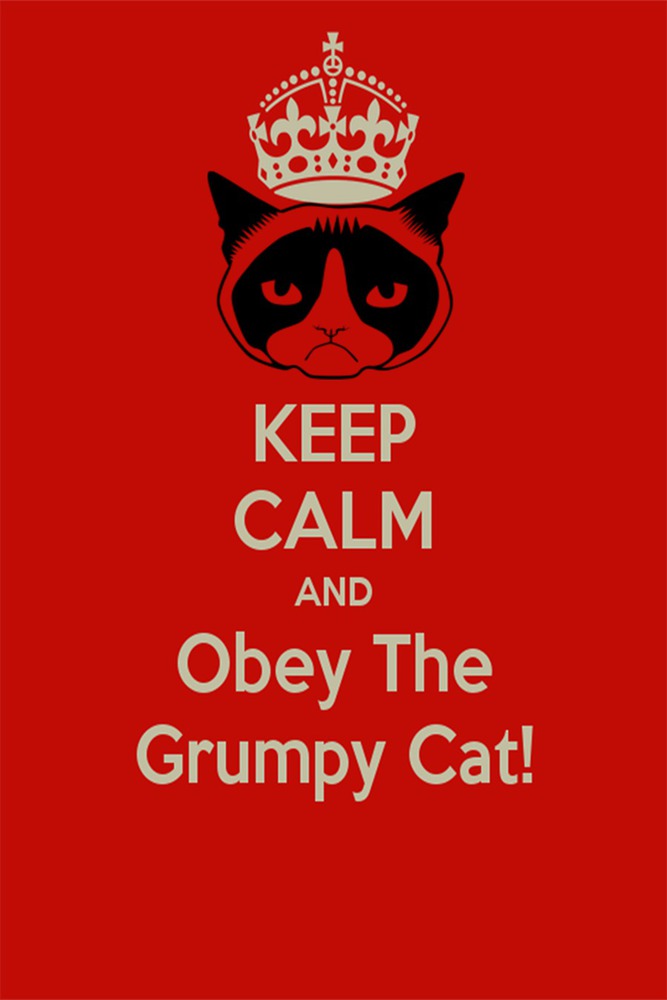 Same sources as Layer 1. The swastika was made by hand in photoshop. 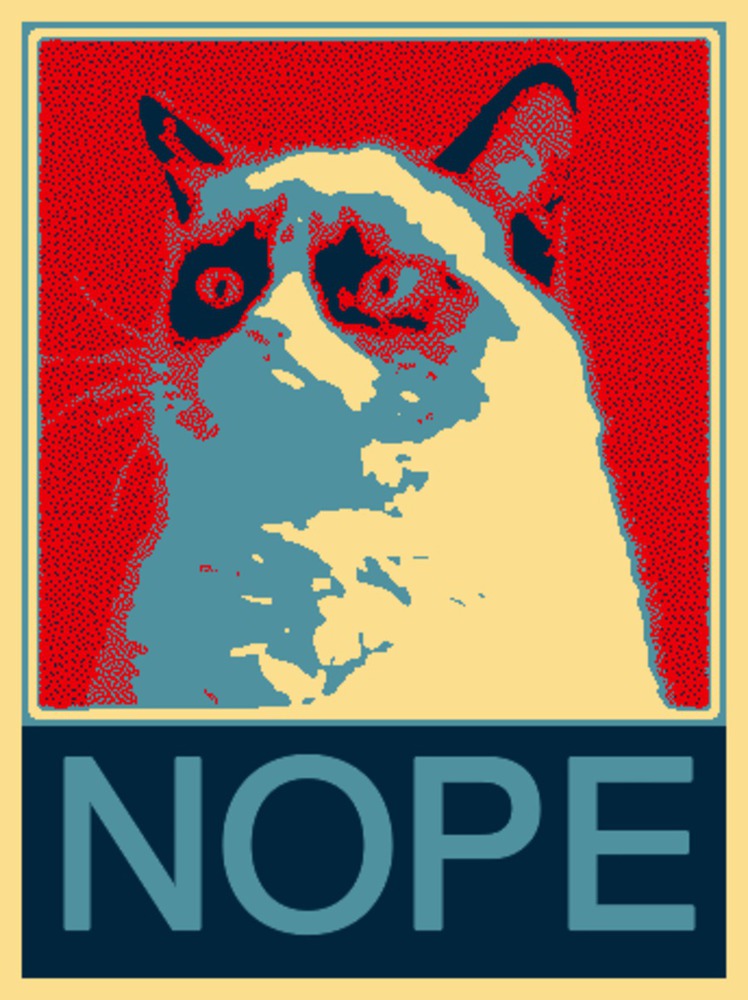 I noticed the theme of world leaders and decided to play on it. Reusing the red motif, I chose to use Obama's stylized HOPE posters but with Grumpy Cat instead saying NOPE. This is something that is sometimes seen on t shirts featuring Grumpy Cat.

At first when I saw the "Keep Calm and Obey" layer I immediately thought of the OBEY street art but I didn't choose to use it for 2 reasons: 1) I didn't feel as if it were a meme in the strictest sense and 2) I didn't want to use OBEY again (someone used it for their beg borrow steal). So I tried to find something that evoked the same sort of intimidating feeling and couldn't really think of a meme that fit that theme and I stumbled upon the Obama Hope poster meme. It didn't have the right feel but with the right grumpy cat image I felt like it easily could. I wanted to manipulate this meme to take it from a message of hope and inspiration and follow the intimidation and obey theme that I felt from the "Keep Calm" layer.