The Illusion of Change

Made by Jan Martinez, Rachel Gu and Jeffrey Bradley

Create a work that appears to change without actually changing.

We intend to create a work that appears to change, but does not. It will showcase how changing perspective can be misinterpreted as change in the subject itself. We use changing lighting to create visual change in a subject while the subject itself remains the same. Because of visual pareidolia, change is perceived because the lighting creates order out of random objects. In addition, we will use the Shepard's tone, the sound that appears to change while remaining at the same pitch, to add to our theme of uniformity. Because the video will loop forever, the pitch will be perceived to be rising, while at the same time the visual will seem to change because of the lighting even though no change, other than the lighting, is occurring.

As the "face" appears, you are given the impression of sadness in the objects. We know the objects' locations and what they represent. Then, the light shrinks away, removing the face from view. We still know the feelings of the objects. The sadness has permanence despite whatever else might change.

Detail what you created. What did you create, how, etc.? What tools and technologies were involved? Include appropriate content and illustration

We created the video with a DSLR camera from Hunt at the visual studio. The items in the video are two stage lights, each on top of a lighting stand, and a small ladder. After capturing the footage, we edited the frames on Photoshop (painfully because it was our second time using Photoshop, the first being the time in recitation) and trimmed it down to about 4-5 seconds.

If the embedded version can't be seen, try this link:

The visual illusion we created revolves around visual pareidolia, which is our tendency to see faces out of random objects. This illusion in general occurs because our brain is just wired that way (more specifically, there is a portion of the brain called the fusiform face area that appears to specialize in face recognition). In the video, this illusion occurs because the light is initially pointing to only one light, which draws your attention away from the rest of the "face," but as the light spreads out, it brings your attention to the entire "face," and you can see it due to visual pareidolia.

The auditory illusion we chose, the Shepard-Risset tone, is created by a superposition of pitches separated by specific intervals that consistently decrease or increase, which result in a sound that seems to constantly increase or decrease without actually moving to a different octave. The overlapping notes heard at a single moment are all an octave apart, creating an ambiguous tone, and each scale fades in and out so we can't hear the beginning and end of the scale. Each scale, though, is increasing/decreasing, thus the ambiguous sound we hear seems to be increasing/decreasing without end.

Describe what informed your ideas and your outcome? How does your outcome relate to other work in the field? What are the precedent projects?

We had initially wanted to emulate the first video seen under the Attributions tab in which a face changes drastically when exposed to light at different angles. We could not recreate that effect very well, however, due to our lack of a completely dark room and a way to stabilize the light. We would see shadows, but they would not alter our faces very much. 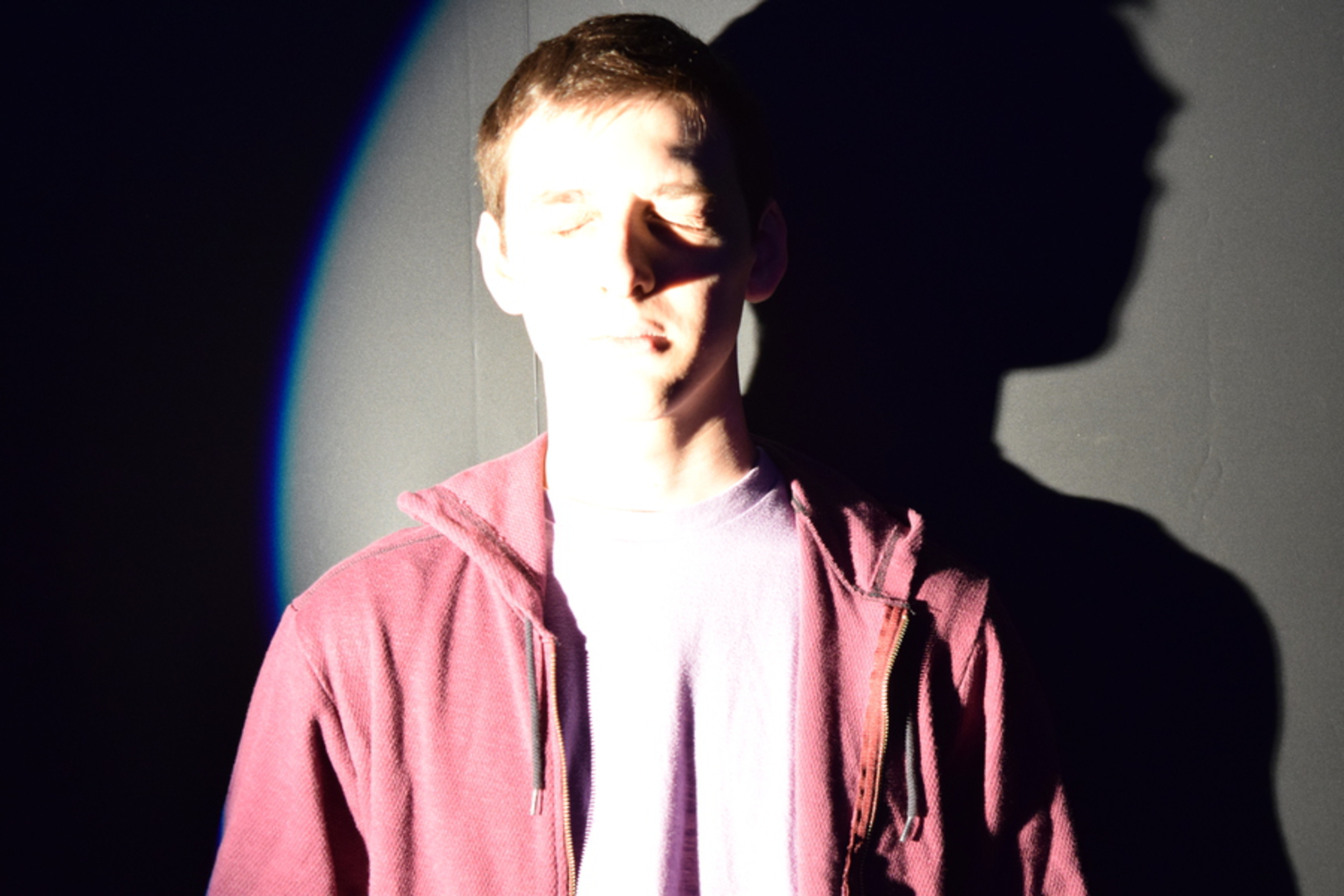 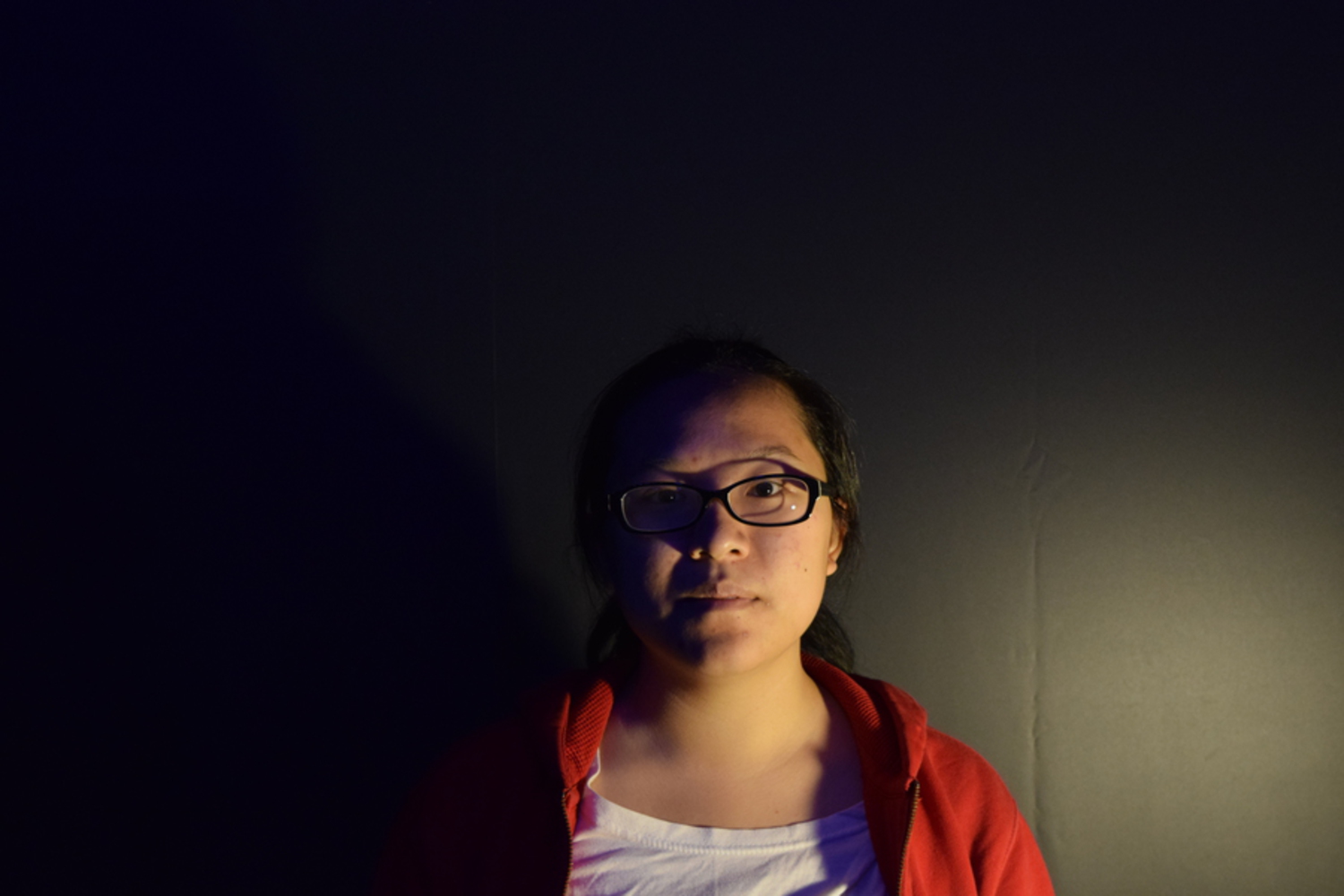 Our next attempt involved one of the lights we were using for the shots. We had expected the more complex shape of the light to produce a more noticeable effect, but it did not. 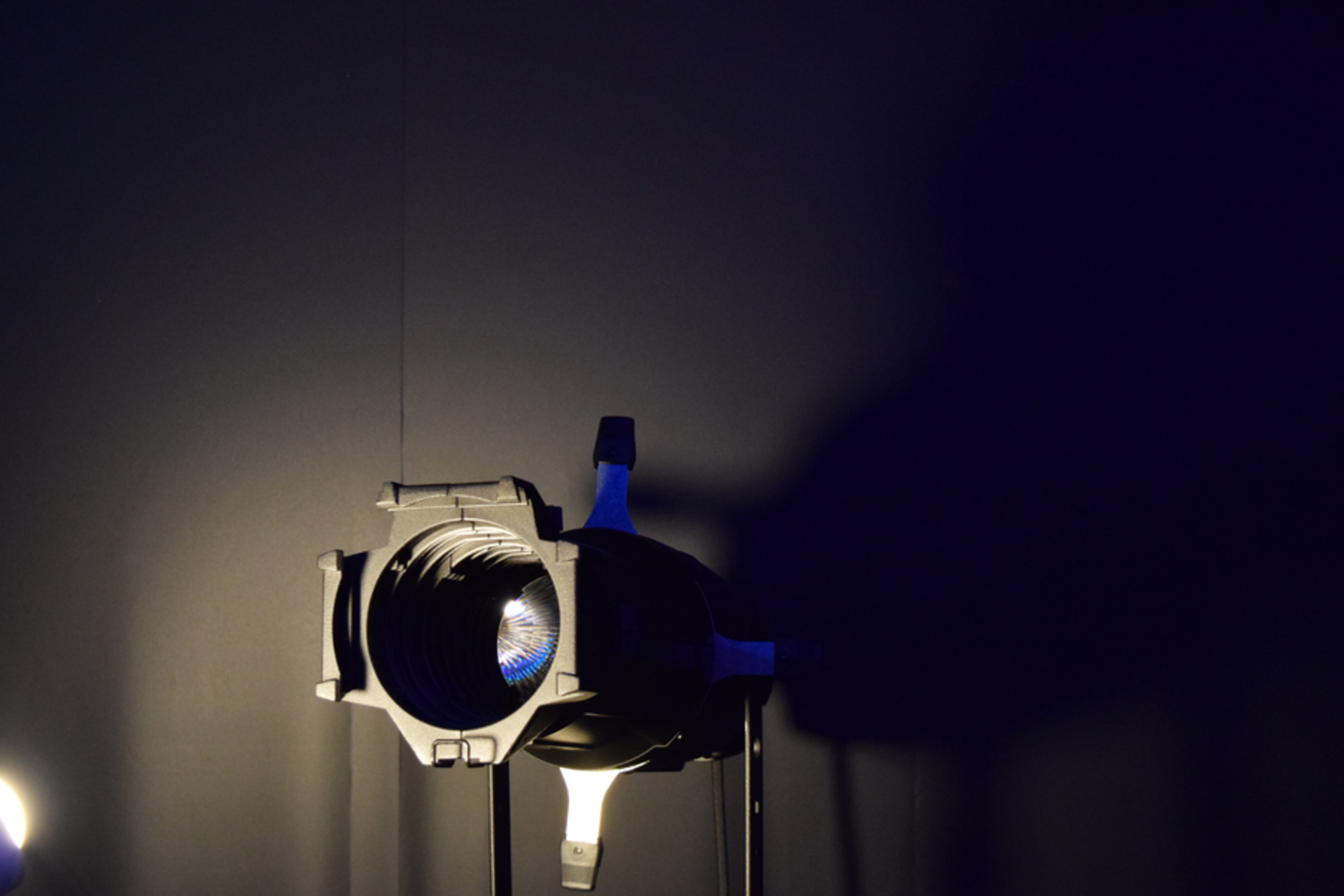 Out of frustration, we made a sad face using two lights and a step ladder. While fiddling with that, we found that we could make only one or two components of the face visible at a time by blocking off the edges of our light source. From there we filmed a shot of progressively revealing the entire face starting from a small square of light on one eye.

By increasing the contrast, lowering the brightness, and looping that video, we could create a repeatedly appearing and disappearing face. 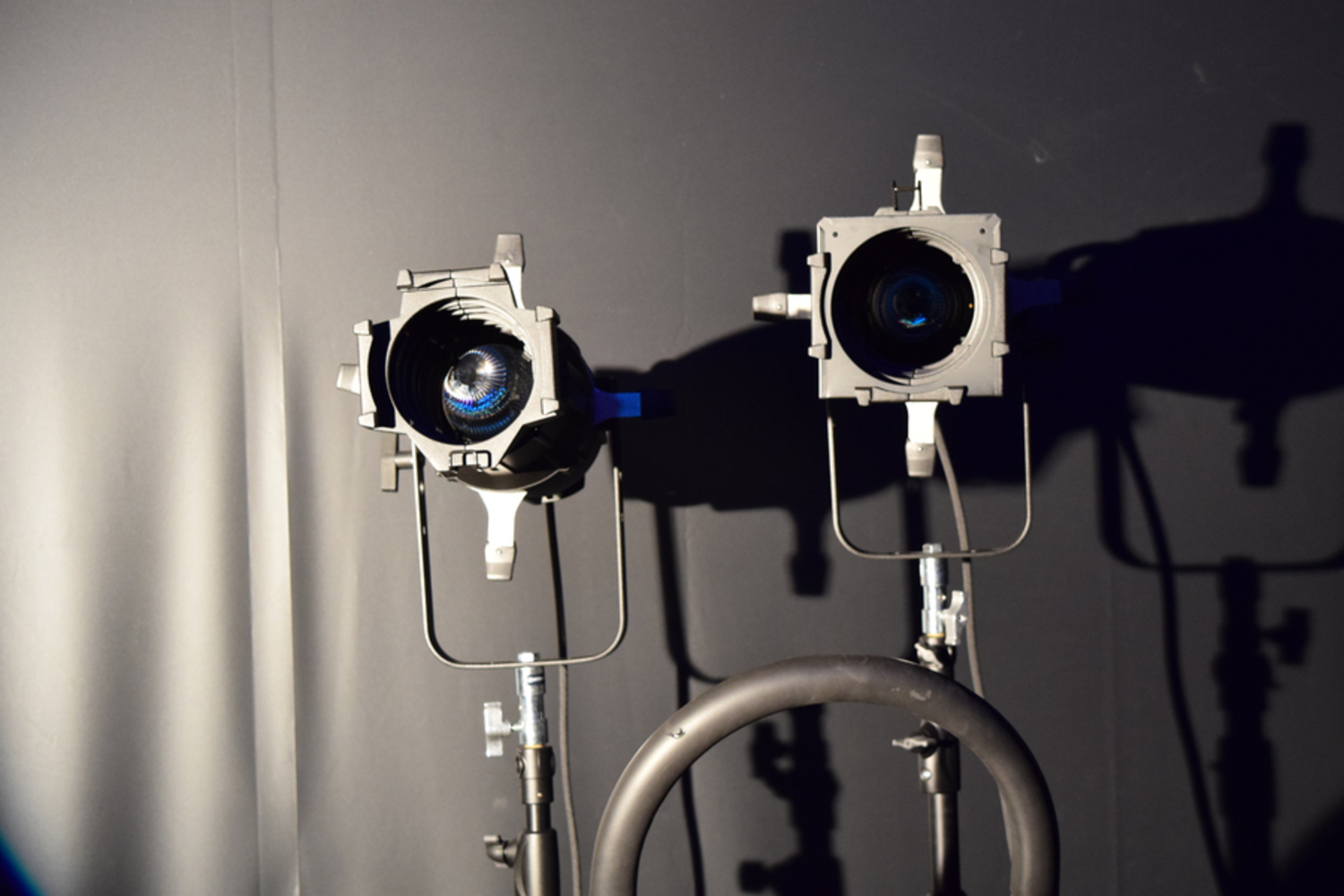 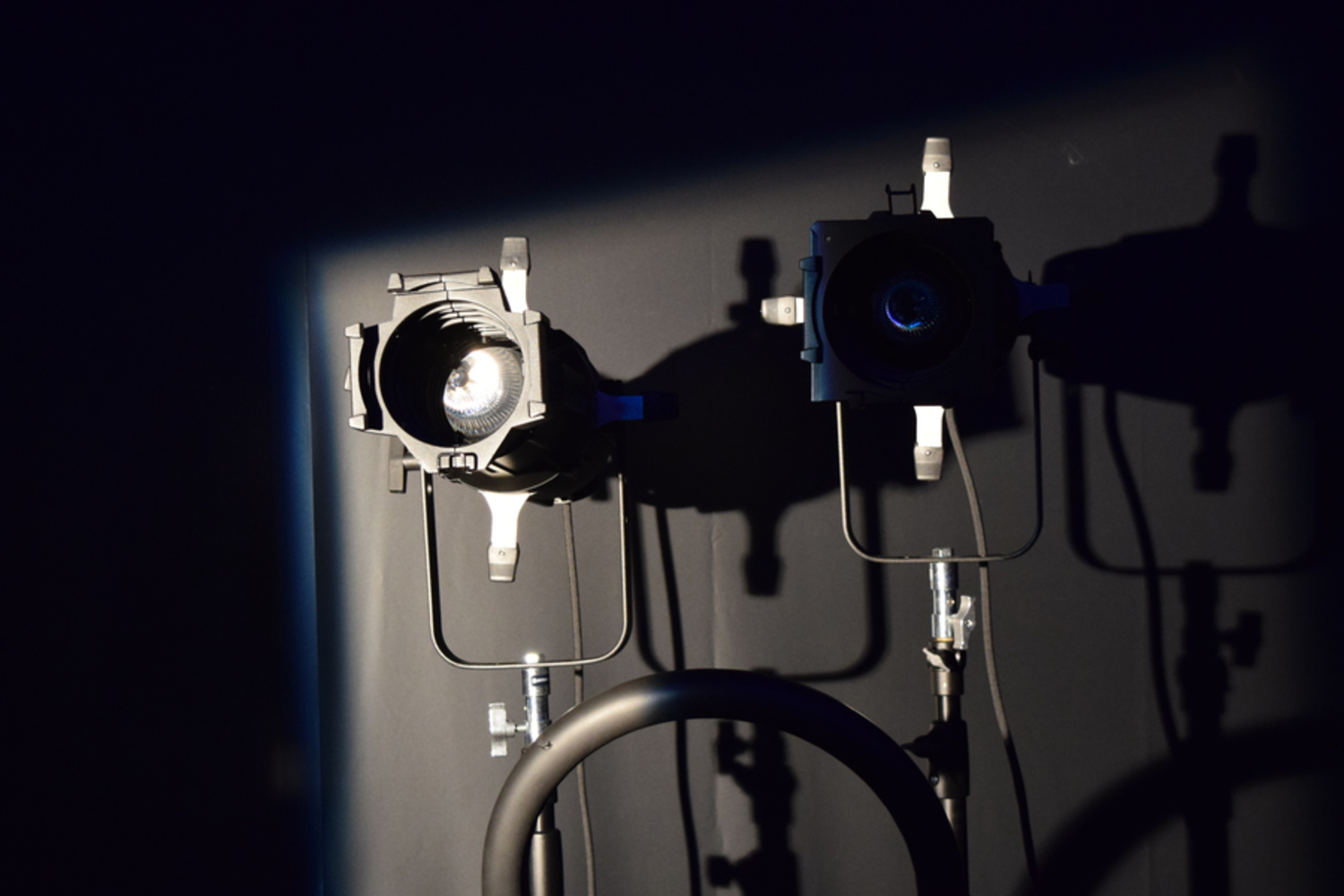 What does your inner critic say about this work? Is it beautiful and interesting?

As the creator of the work, when I view it, I'm influenced by the amount of effort each member had to put in, simply because we didn't know how to use the camera or Photoshop well enough. At the same time, I think it does give the effect we wanted it to have, that is, at first you can't see the "face," but then after the first iteration, you can see it because its already been revealed. In addition to its physically sad face, the fading of the face, both in and out, also gives it emotion and creates a sad theme. I think we could have played more with the lighting, but overall, I think its a good representation of our skill level and does evoke emotion, which does make it beautiful in a sense. As for interesting, I think it doesn't hold my attention for a long time, that is, after 3 iterations I feel like I've seen it all, but at the same time, I'm not quite sure how to make it more interesting. I also think the lack of action makes it more poetic because much of the experience is then up to how the viewer wants to interpret it.

Jeffrey Bradley: I had overestimated our ability to recreate what we saw as well as the resources available to us. The lending desk had little to offer outside of a camera and a tripod. We might have had better luck filming in one of our rooms where we would have complete control over lighting. In the studio we used, we were not able to turn off all of the overhead lights, leading to a lackluster result in our initial idea. If I were to repeat the project, I would plan ahead more instead of hoping to figure out the plan on the set. In addition, I would research how to use photoshop before sitting down with limited time to use it.

Rachel Gu: Initially I was fairly overwhelmed with this project because I have no experience in creating videos beyond the small thing we did in recitation. I think it was a good experience that resulted in a not as great final product. If I were to do something similar again in the future, I would try to create something more along the lines of what I'm familiar with, and get used to these video editing/capturing techniques in general.

Jan Martinez: Wait, so we each write our own critique? Ok then. If I could redo this, I would not try to make it a gif. Partly because gifs don't have sound. Also because gifs are just weird and bulky. Besides that, I would try to work out a more robust and complex video instead of a quick "illusion". Something along the lines of playing a song to a video than then tells it's own story with video magic. Examples being "Sacrilege" by Yeah Yeah Yeahs and "This Too Shall Pass" by OK Go. I think I'm done now.

This video, How A Face Changes With Light, originally inspired our work.

The above video shows the Shepard Tone, a tone that appears to continuously grow higher in pitch while, in reality, it is a single sound clip looped into itself.

While there are many examples of pareidolia, it was interesting to see the illusion displayed with a dynamic component in the form of the changing lighting. I was surprised by how much more interesting this made the animation, which still shows the illusory effect pretty well. The audio component is less remarkable, though that doesn’t mean it was any less effective. Still, I didn’t think the pareidolic(?) effect was as apparent as it could have been. This is just speculation, but maybe the lighting, depth, and shadows actually draw viewers’ attention away from the foreground objects. Without knowing what to look for, it took a couple loops for me to discover the face on my own, since the lighting seemed more important. That being said, I still like the idea of the parts of the face being revealed gradually by the changing light. For a start, maybe you could bring the background closer and tweak the lighting angles to minimize the distracting shadows. Also, I would have looked into different formats for presenting your work. Trying to open the swf file was surprisingly annoying, and it would have been just as effective as a looped video.

Create a work that appears to change without actually changing.