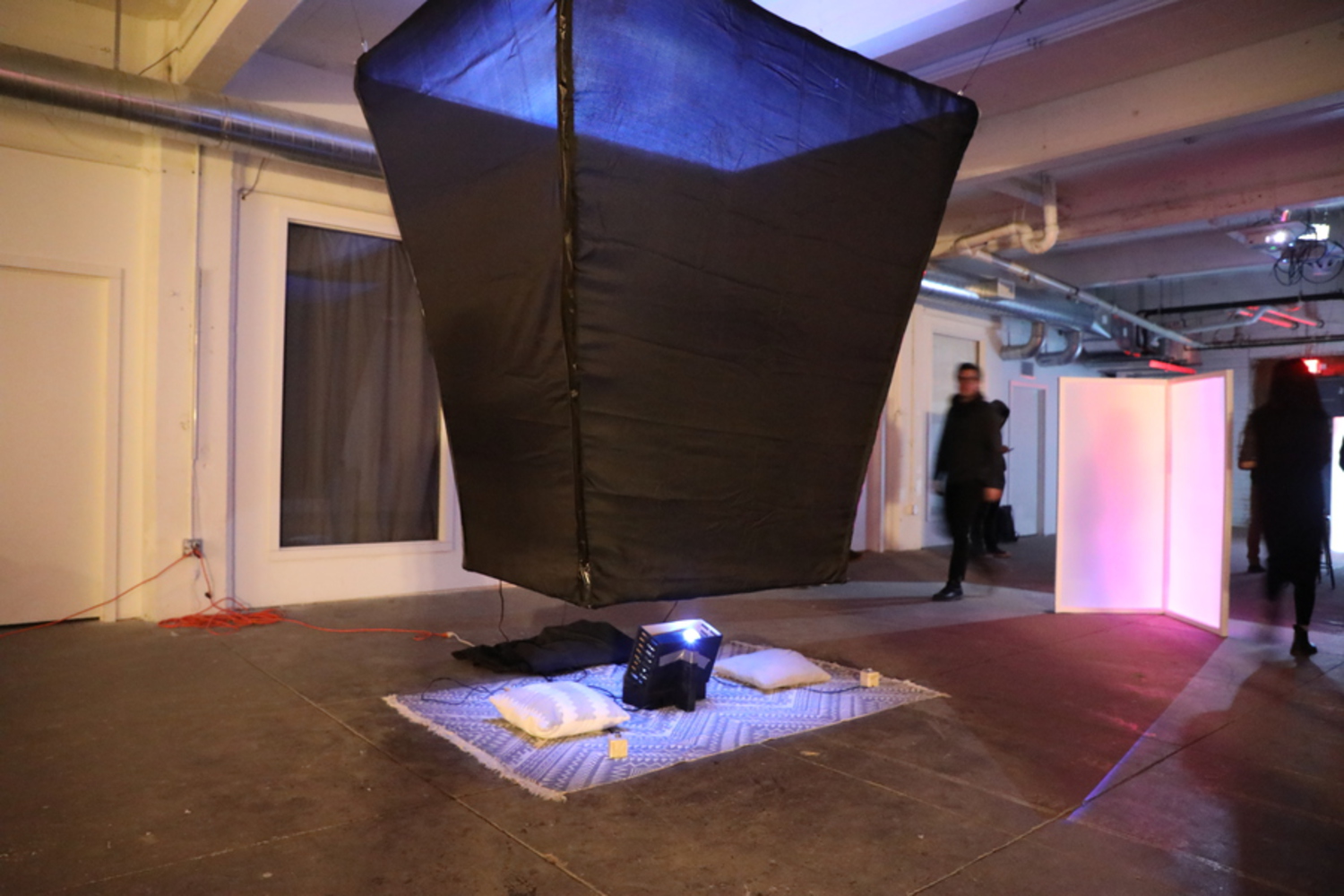 Digital Mastaba was informed by the idea of endless tunnels - vast openness into which a viewer can find themselves lost in the never-ending patterns of light. Adding to the sense of vastness from an interior, we recognized that a form that sits purely as an object could add to the sense of surprise and mystery as someone enters. Thus, we decided to create a formal gesture that, when viewed from outside, was merely an object floating in space but upon entering became a larger, endless space. The naming convention along with the inspiration and conceptual grounding behind it are explained later on.

Formally, an inverted pyramid allowed for the form to sit antipodally against the perpendicular walls in the space while creating an interior surface that could be projected onto from the ground. Adding to the sense of mystery, the PVC-structure is enclosed in black fabric. To create an experience where a viewer could lie on their back and view a projection above, we decided to suspend the entire structure from the ceiling of the studio. Finally, on the ground, we used a carpet and pillows to orchestrate a sense of serenity so that as viewers entered the structure by sliding underneath, they could relax and take in their surroundings as they continuously change and return to the original.

To make the installation interactive, the animation and audio-scape are controlled via four potentiometers embedded in custom built controllers. By turning the knobs, the viewer can modulate different parameters of the animation and the audio - this will also be explained in more detail below. 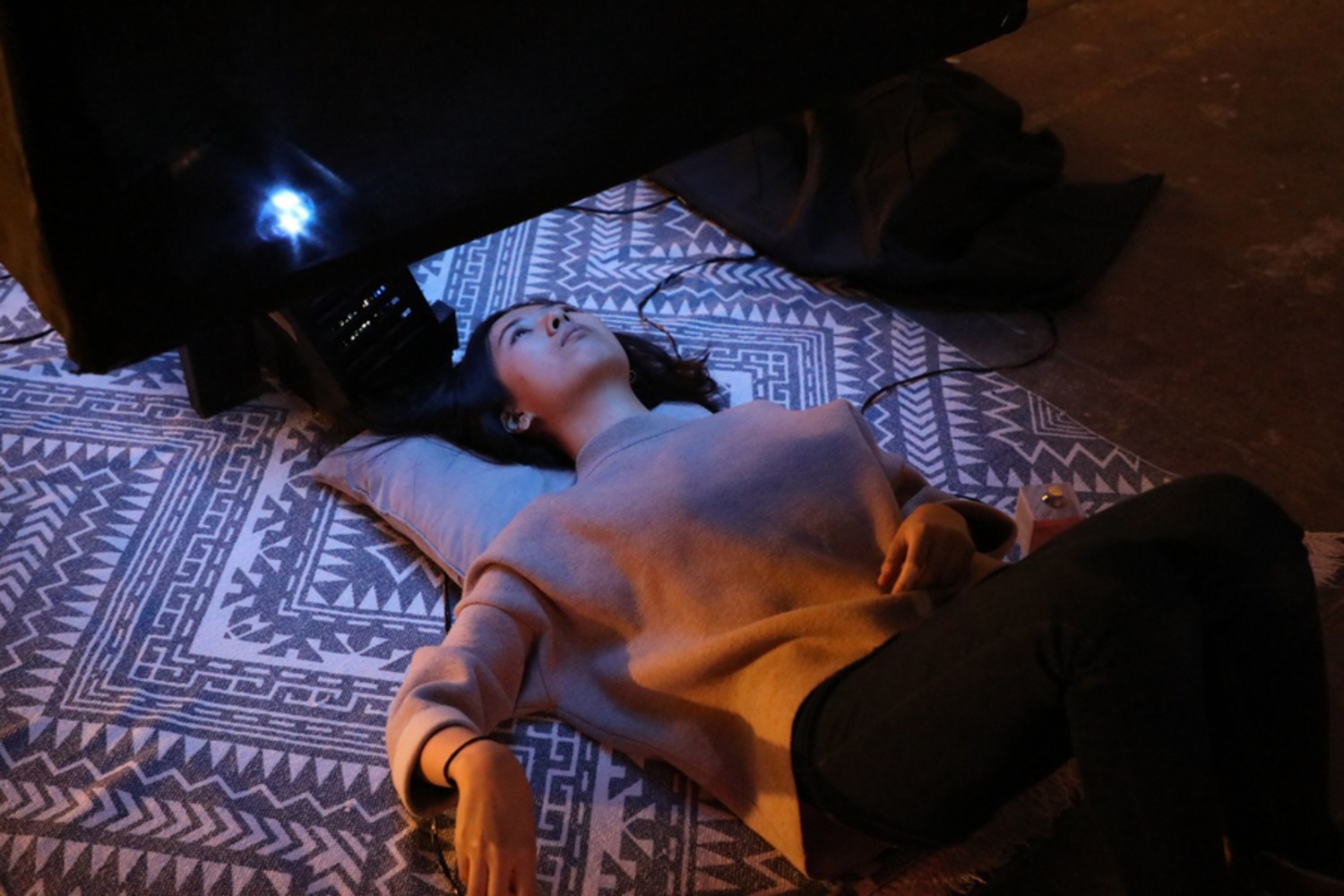 Developement followed a series of design iterations, with consistant themes throughout of isolation and virtual expansion of space. We began wanting to utilize one of the architectural idosyncracies of the space - the bricked up windows. This led us to the design pictured below. We then thought about how to manipulate even further one's spatial percetion, and decided reorienting the body would have a profound effect.

The animation and controllers went through a series of iterations as well, figuring out which variables of the animation to change, and what the constraints and parameters of those would be.

The construction of the physical piece was one of the more challenging pieces. Not enough time was budgeted to test and iterate on the structure, so the end result did not have the level of craft we would have liked. 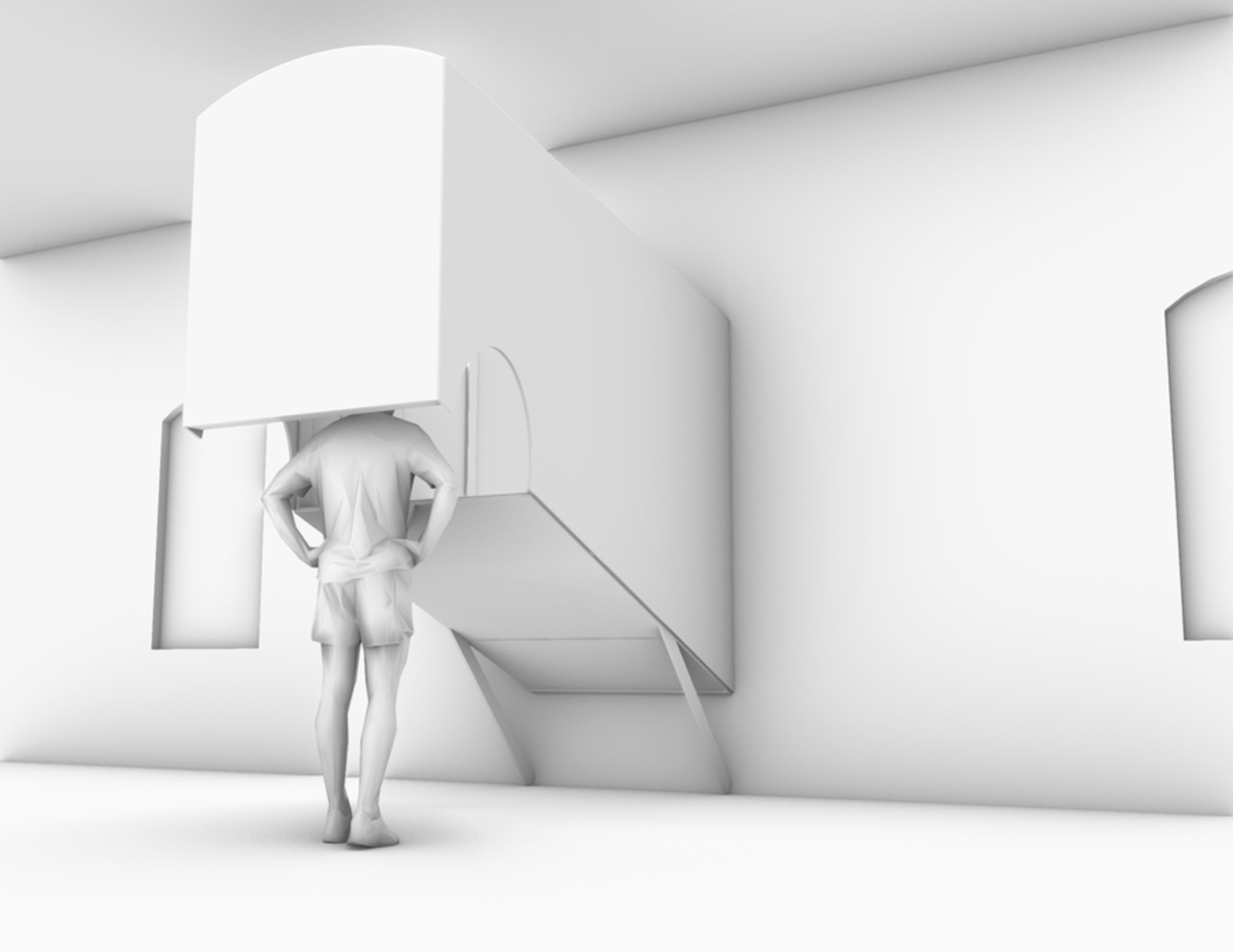 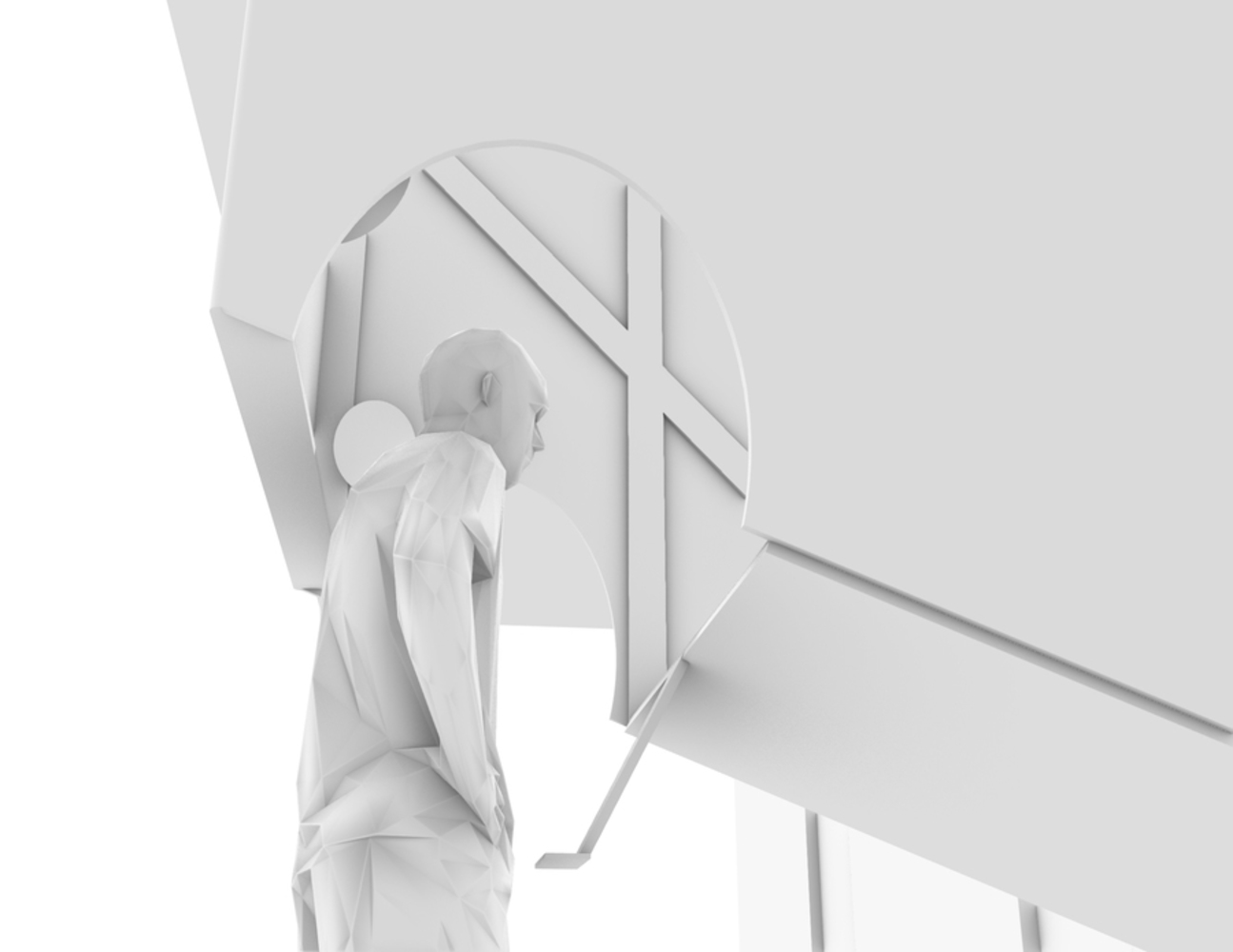 We created a tunnel animation with touch designer and added another particle layer on top of that. We wanted to create a"tunnel vision" for the audience to go into the journey. Since we finalized our design as the audience will be lying on the ground, we also wanted to leverage the gravity effect. Therefore, the movement of the tunnel can really create a moving visual effect.

In terms of the color choice, the inspiration came from James Turrel's lighting installation, where he played with lighting and perspective really well. Therefore, we choose a gradient of blue-violet color transition as the audience going through the tunnel.

We also chose to added a particle effect layer to the animation, in order to indicate the movement of the viewer as well as creating a dynamic effect on the overall experience.

The parameters of the animation controllable by the viewer are the speed of the camera movement, diameter of the tunnel, color gradation, and the particle birth rate. The same four knobs are also tied to the four audio samples that are continuously looping to create the soudscape of the piece. The knobs each control the volume on one of the samples. 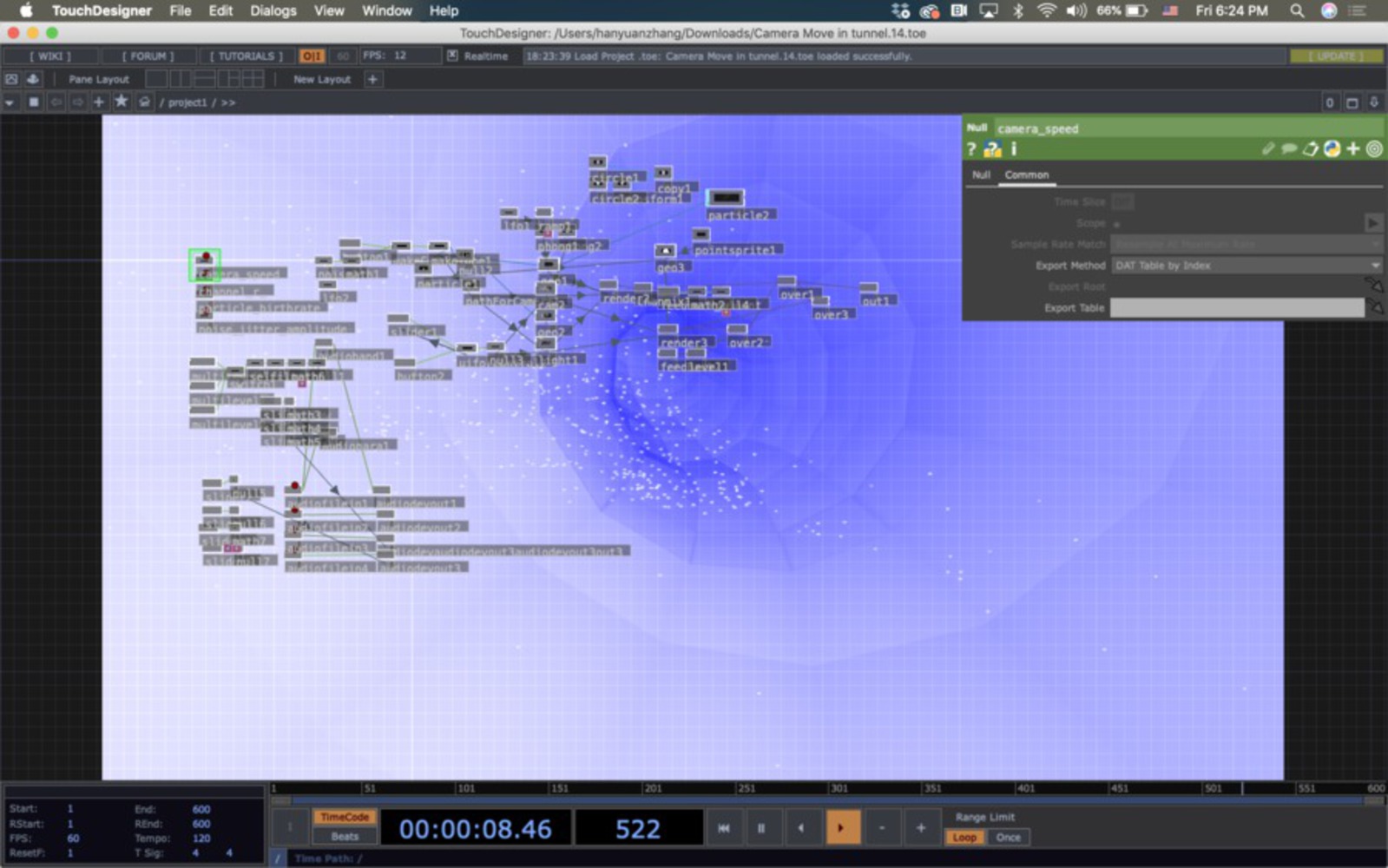 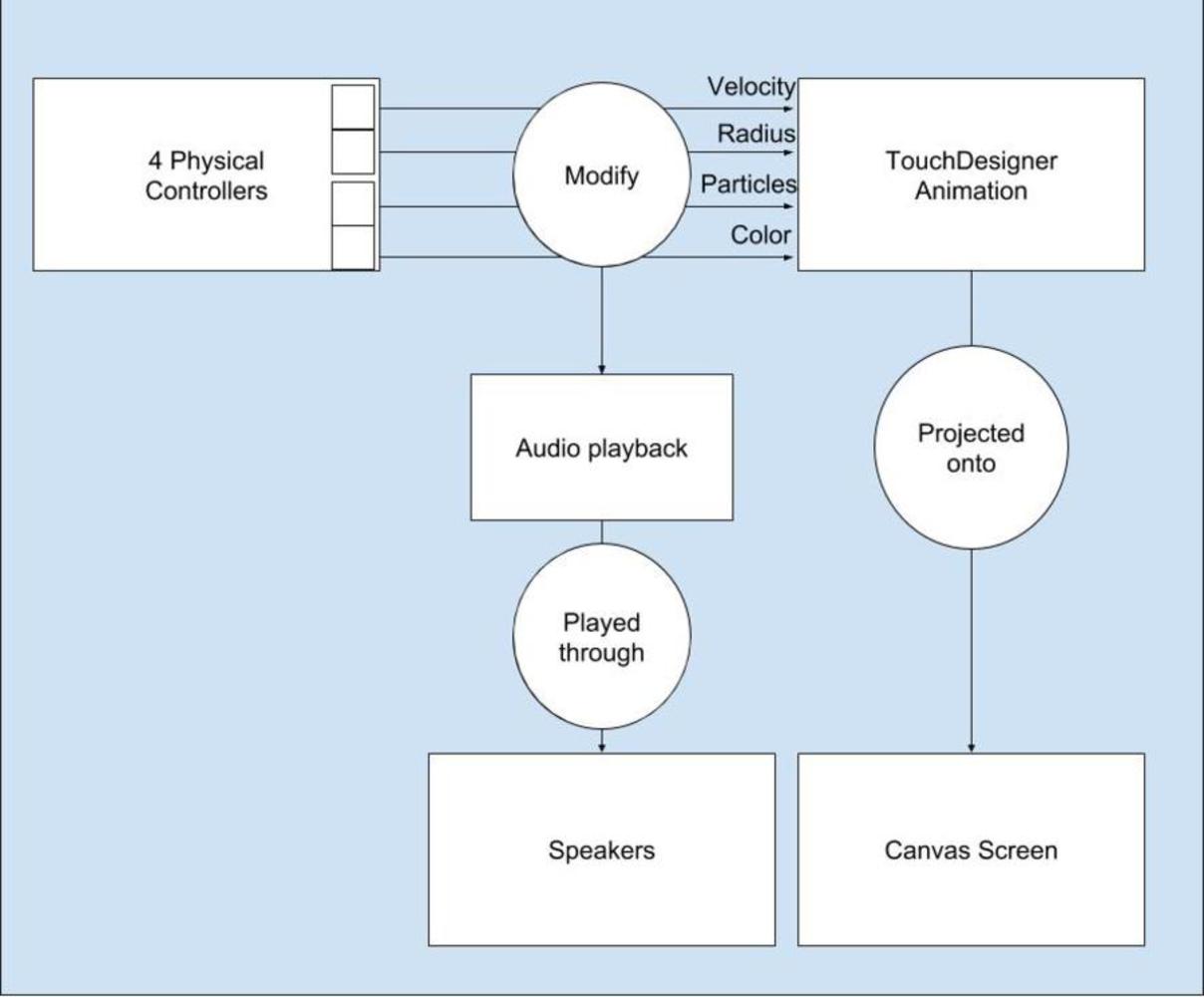 The name "Digital Mastaba" comes from the ancient egyption architectural feature that our structure resembles. Meaning "House for Eternity" the truncated pyramids served as burial structures, transporting the pharaos to the afterlife. They were subended with tunnels going down into the ground which contained the actual tombs. Our project envokes many of the same ideas and themes, in addition to the physical likeness. It is this discourse that we hoped to jump into, and base the project off of. 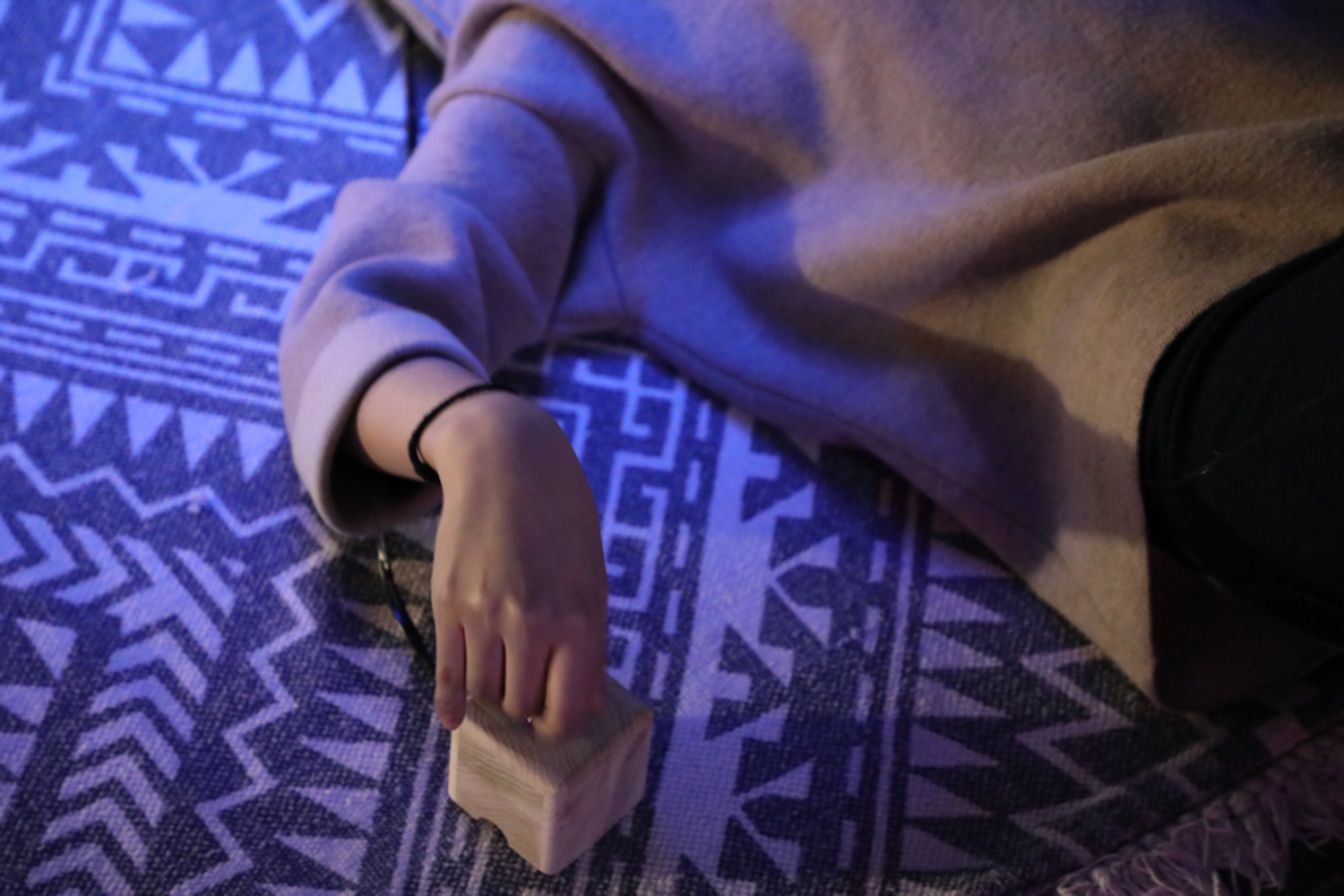 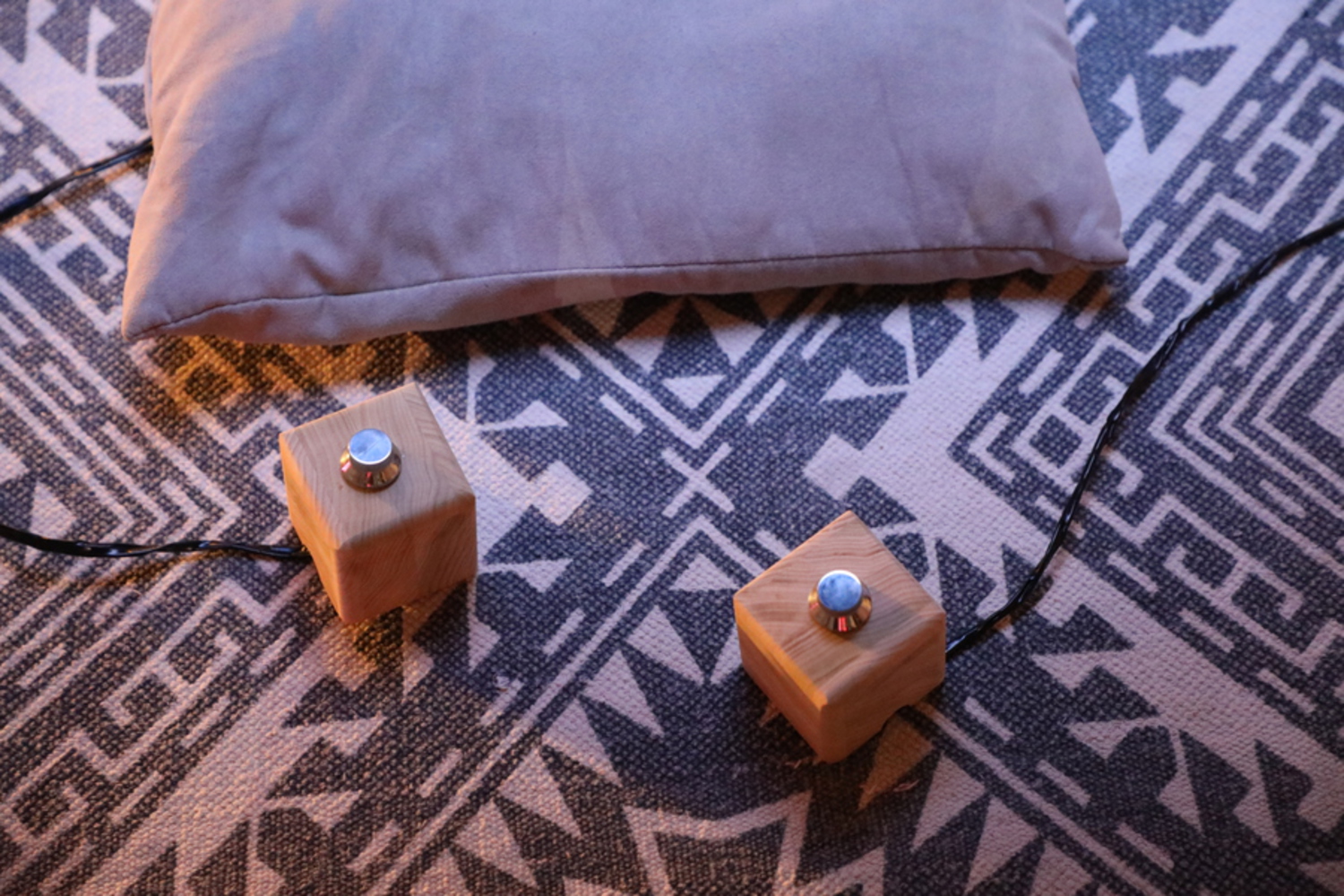 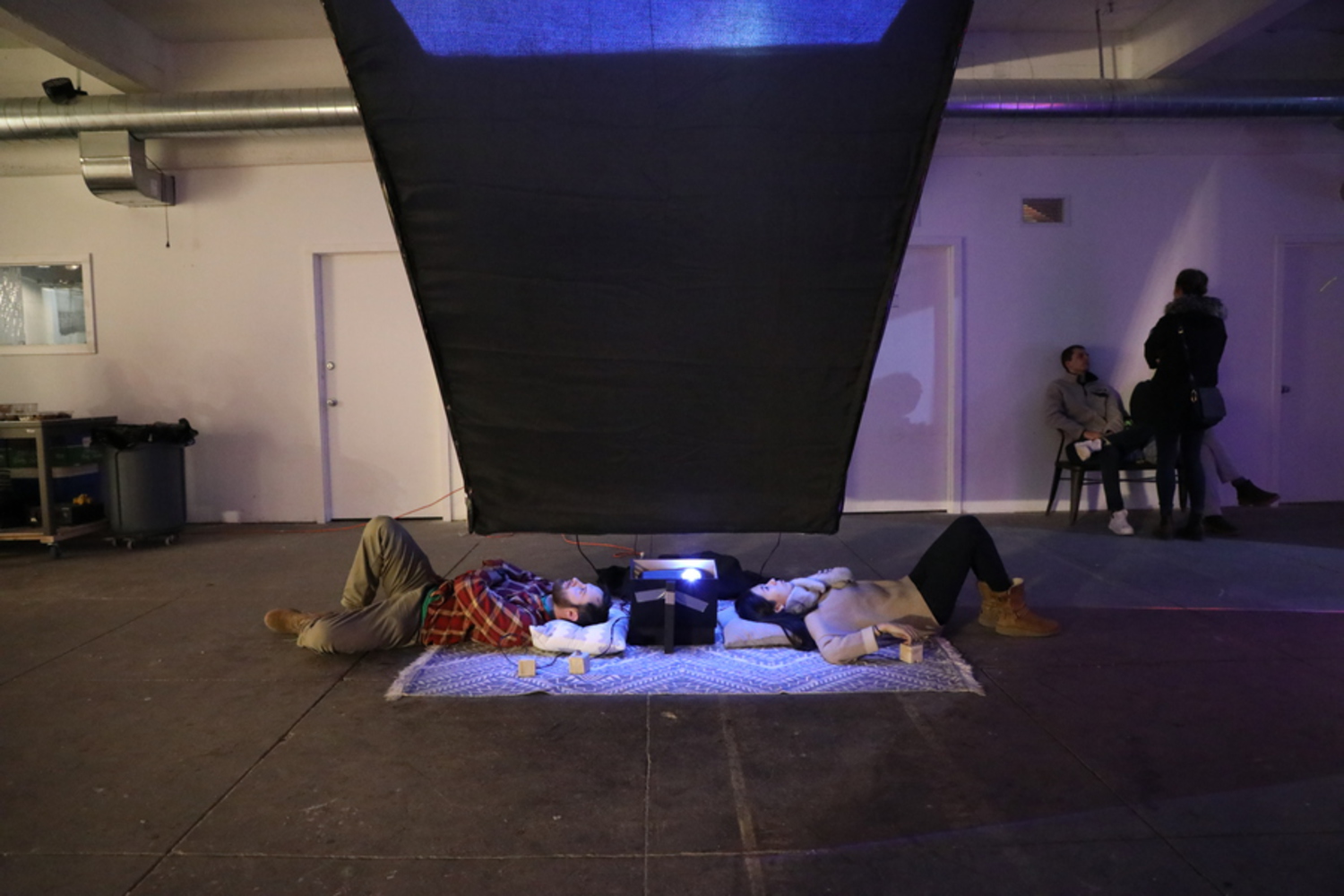 People seemed to enjoy it! 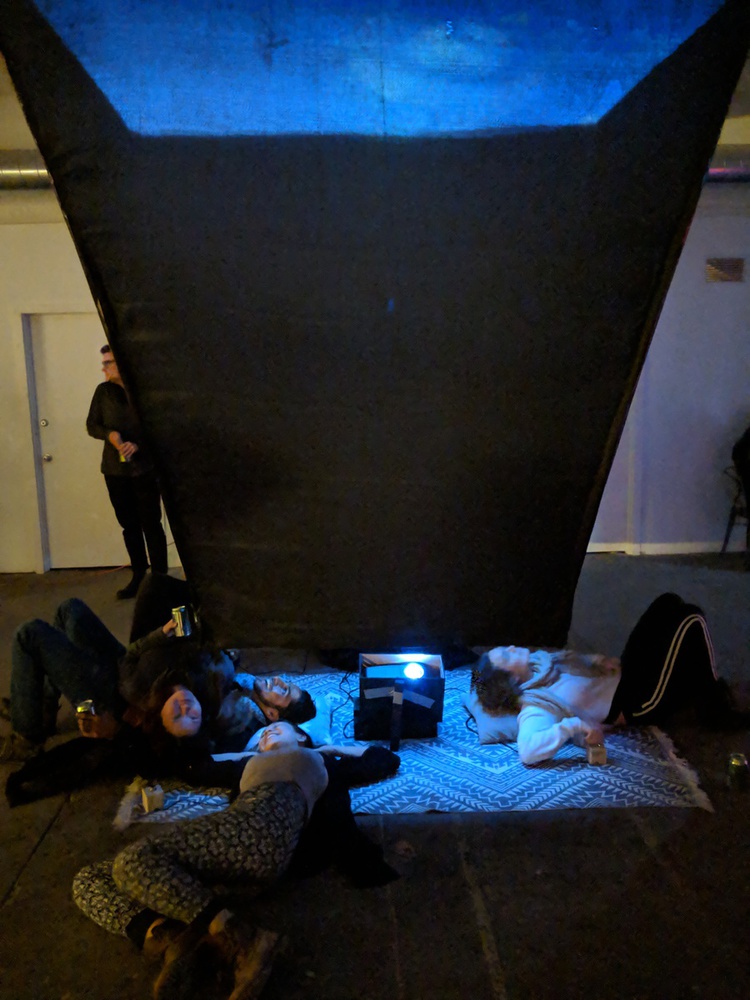 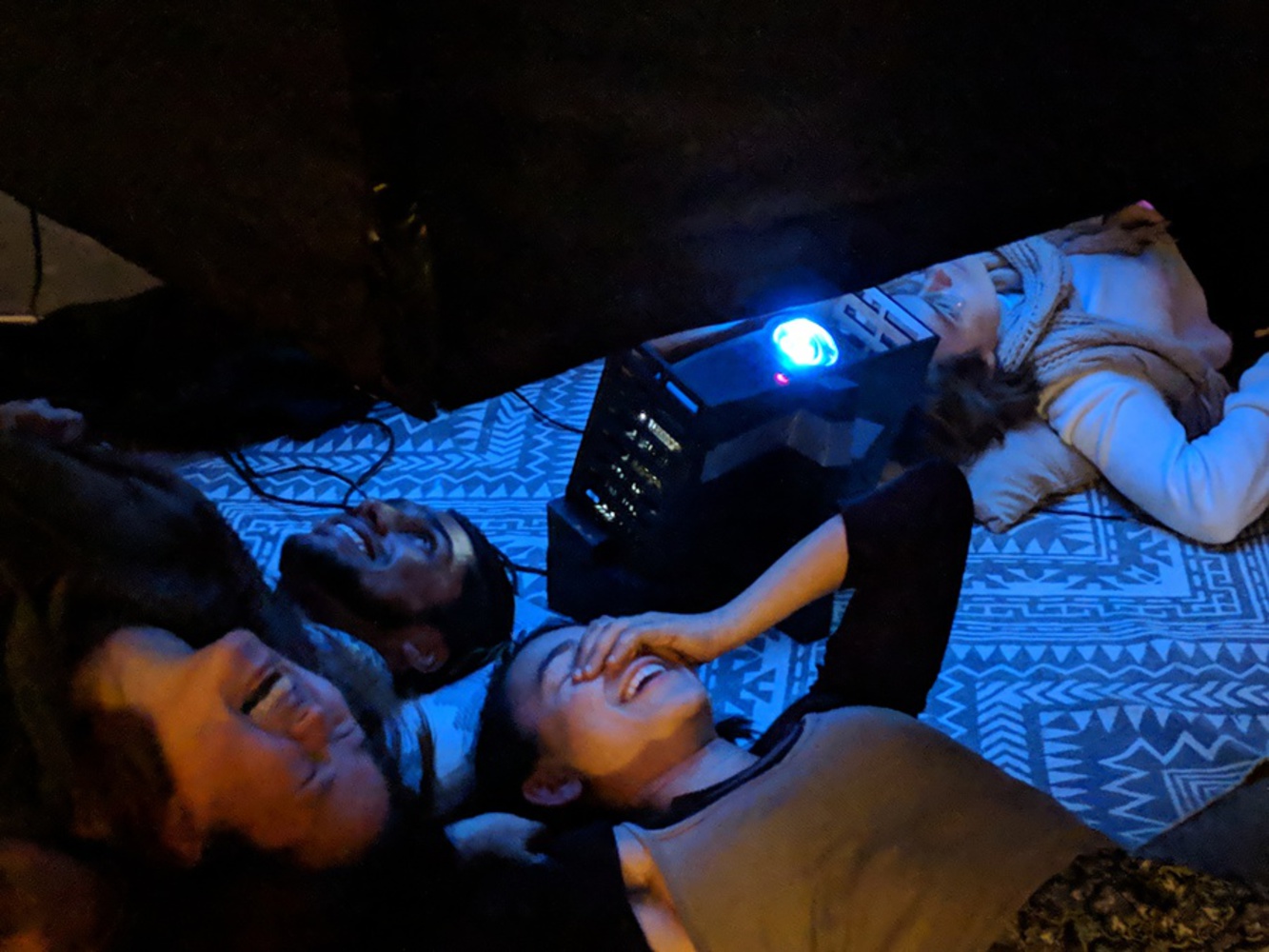 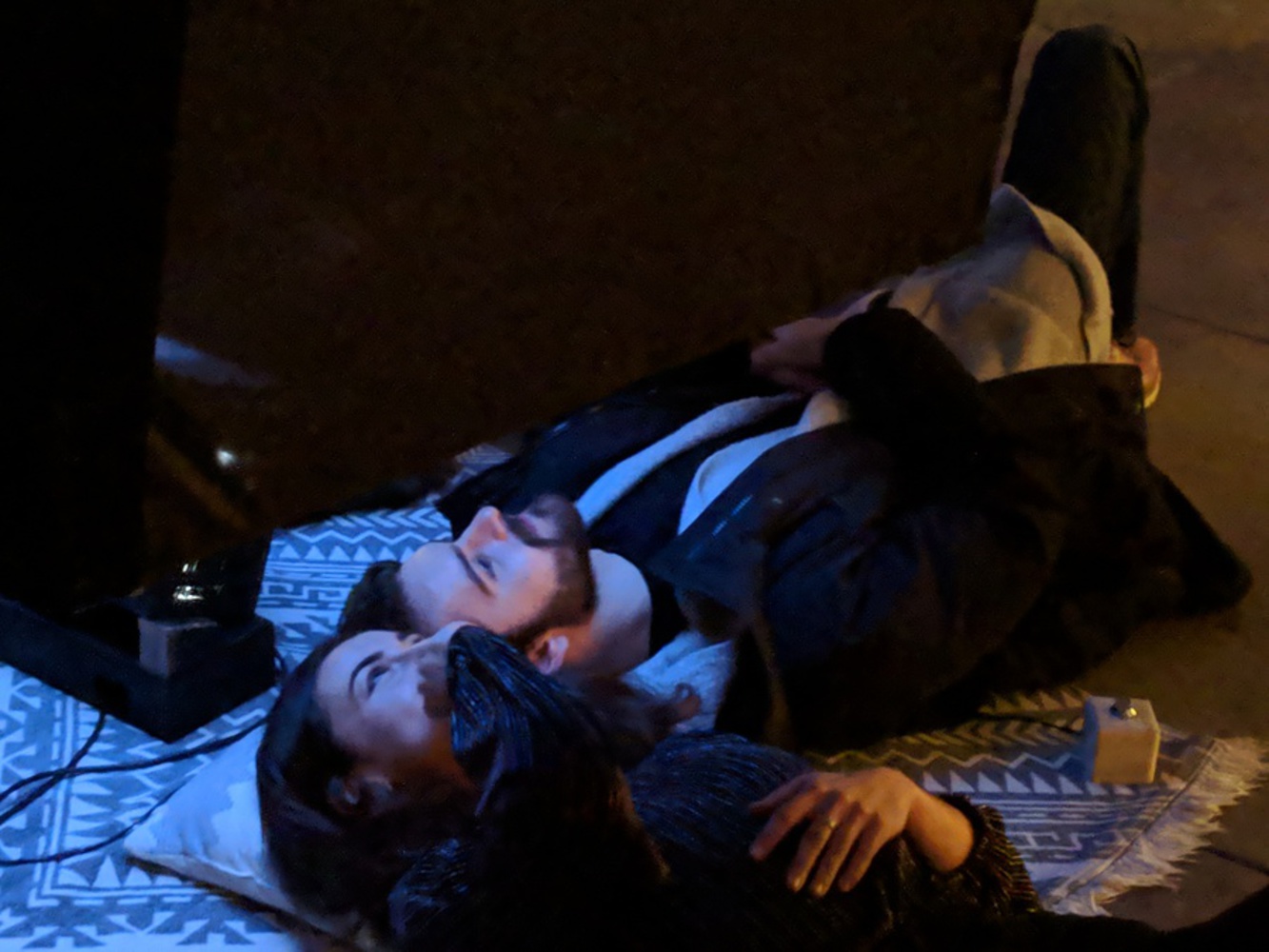 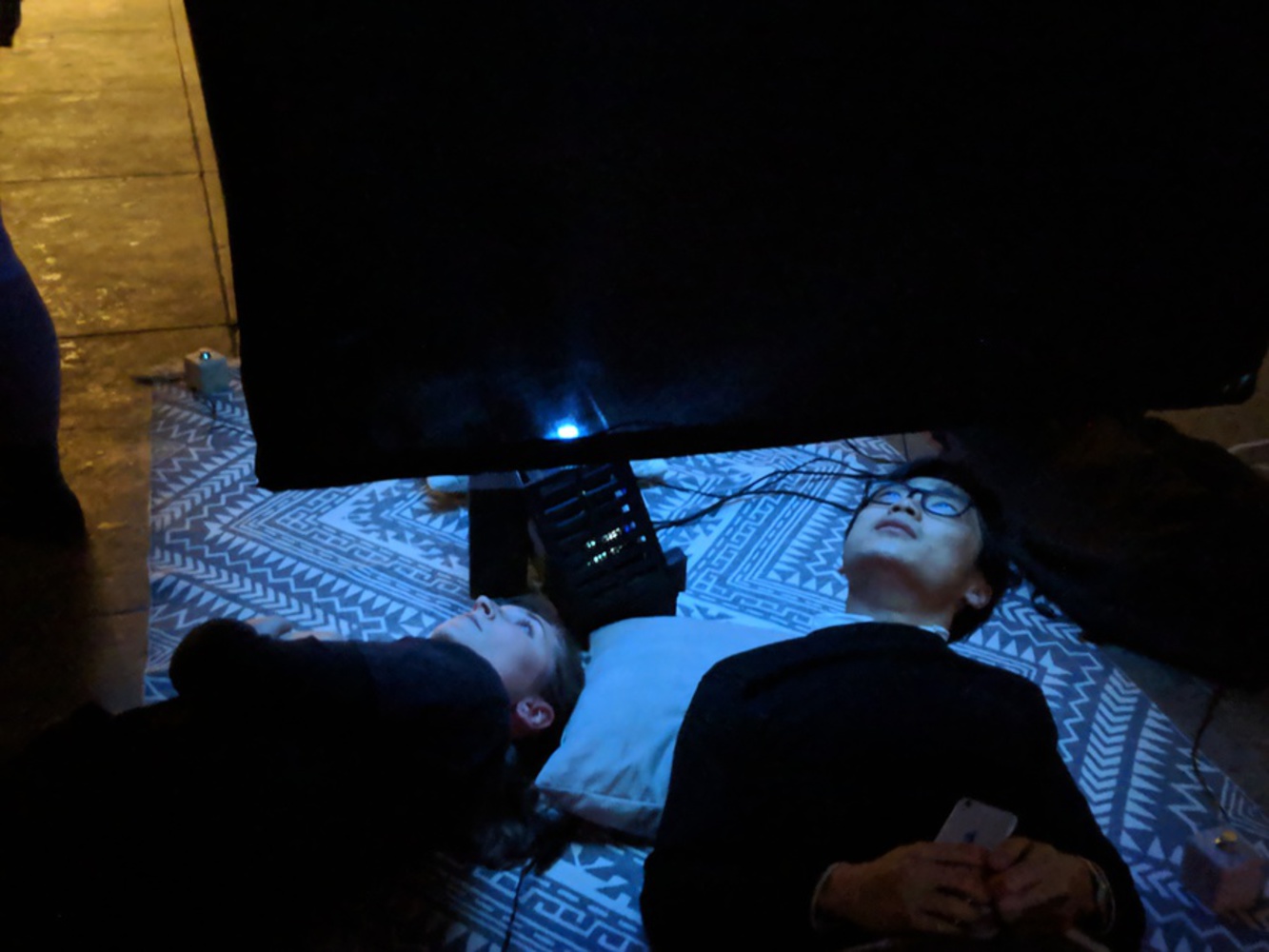 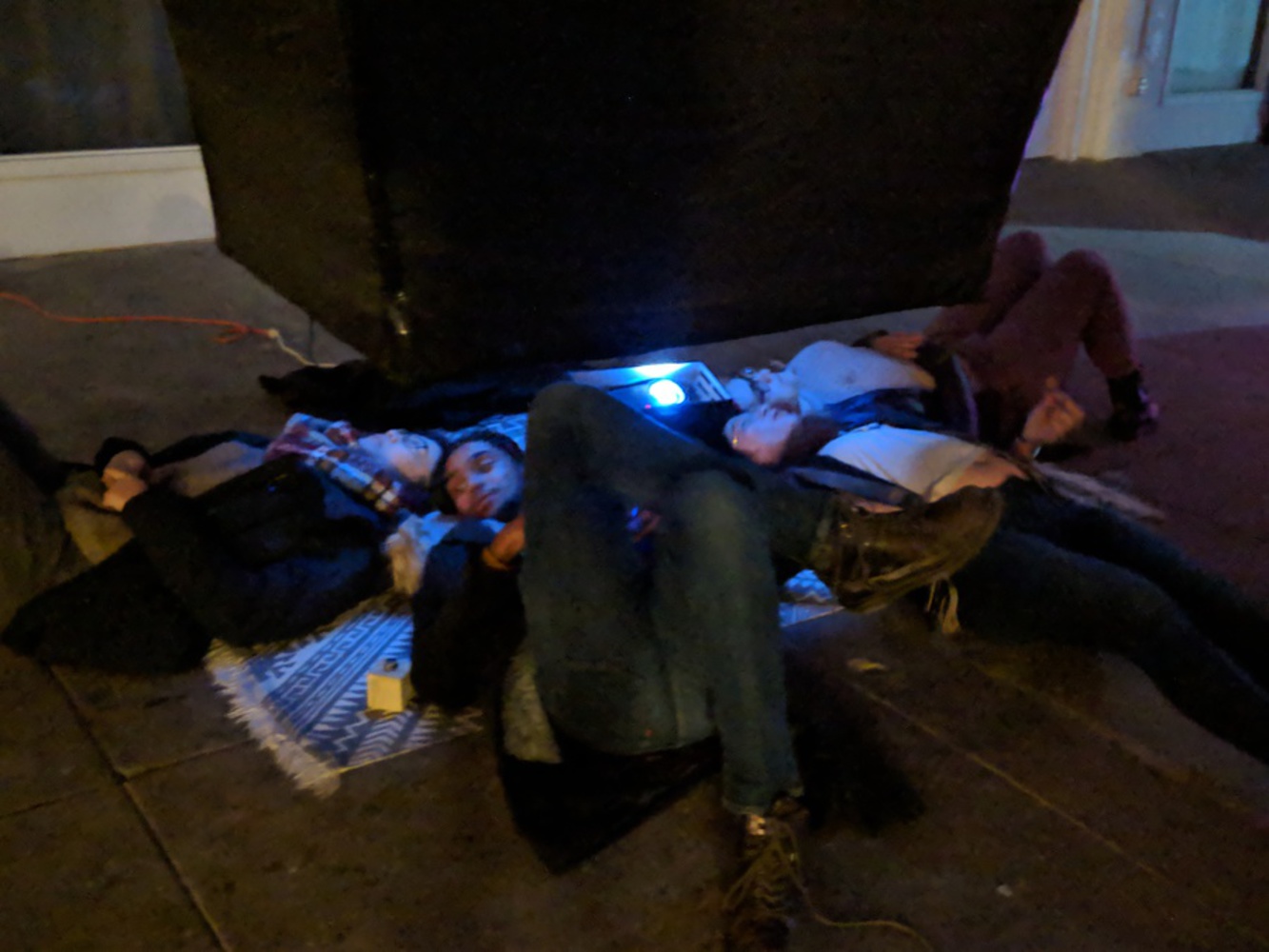