Made by Uday Uppal

An attempt at taking an elevator sign in Hunt Library, and placing it in a new context through the projection of new backgrounds

Recontextualization is a project that focuses on the importance of background and context in the interpretation of a piece. The subject matter is an elevator sign in Hunt Library. Onto this sign are projected several different "backgrounds", each of which seeks to place the imagery on the sign into a new context, leading to different interpretations of what the sign really means. The driving idea behind this work is to get viewers to see the sign in a different light each time, and to develop various ideas about the meaning of the sign based on the context it is being placed in. This piece is heavily influenced by Banksy's work in particular, as he often takes certain objects and paints around or on them to give them new meaning, a prime example being Boy With Hammer. Extinguishing Bodies by Miranda Jacoby and The Mourners by Ali Momeni also guided the development of this piece.

I ended up creating a slideshow of images that would be projected onto the elevator sign. Each image placed the sign into a new context so that it could be interpreted in a different manner. The backgrounds themes included trains, prison, ski lifts, and even a better version of an elevator sign. These images are below. They were created by first capturing an image of the sign, and then using this image as a background in Pixlr to generate the other backgrounds over top of it. Then, a pico projector was mounted near the sign, and the images were projected onto the sign, cycling every few minutes. Millumin was used to perfectly line up the projected images over top of the sign. 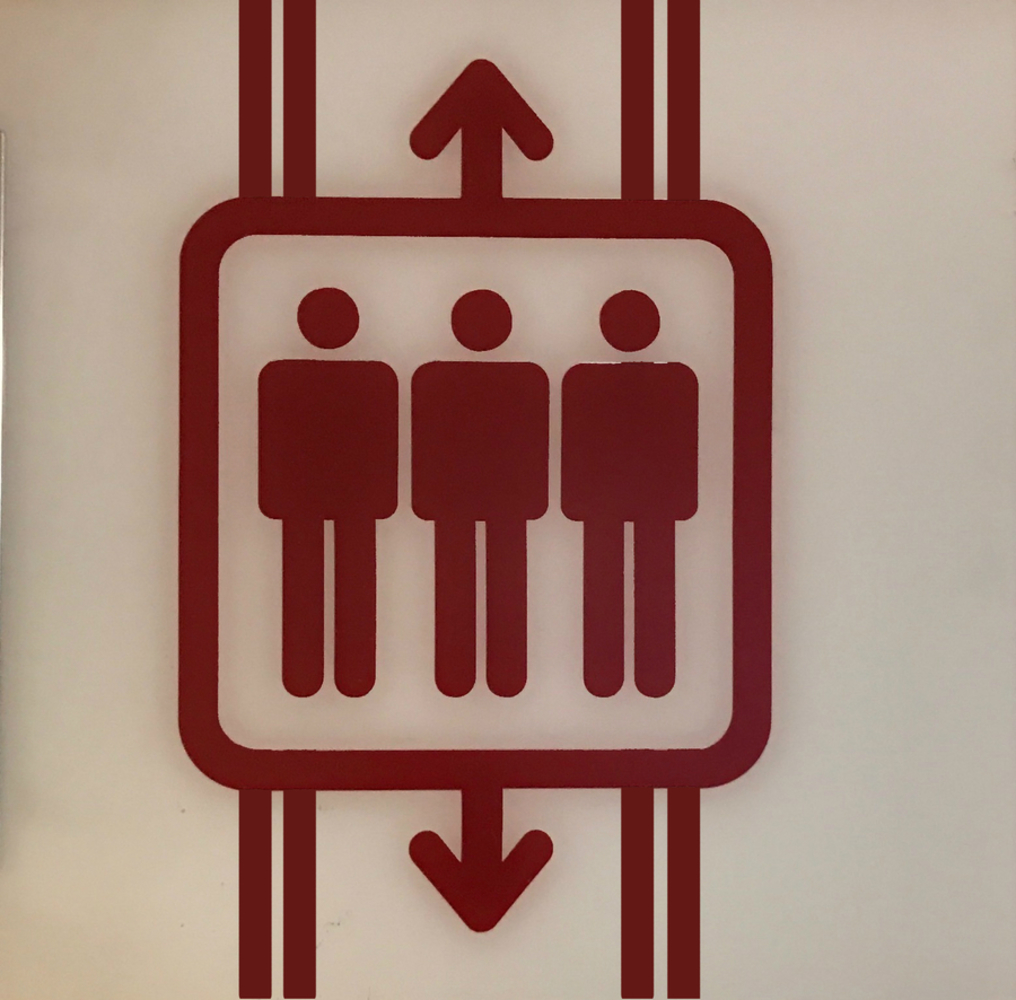 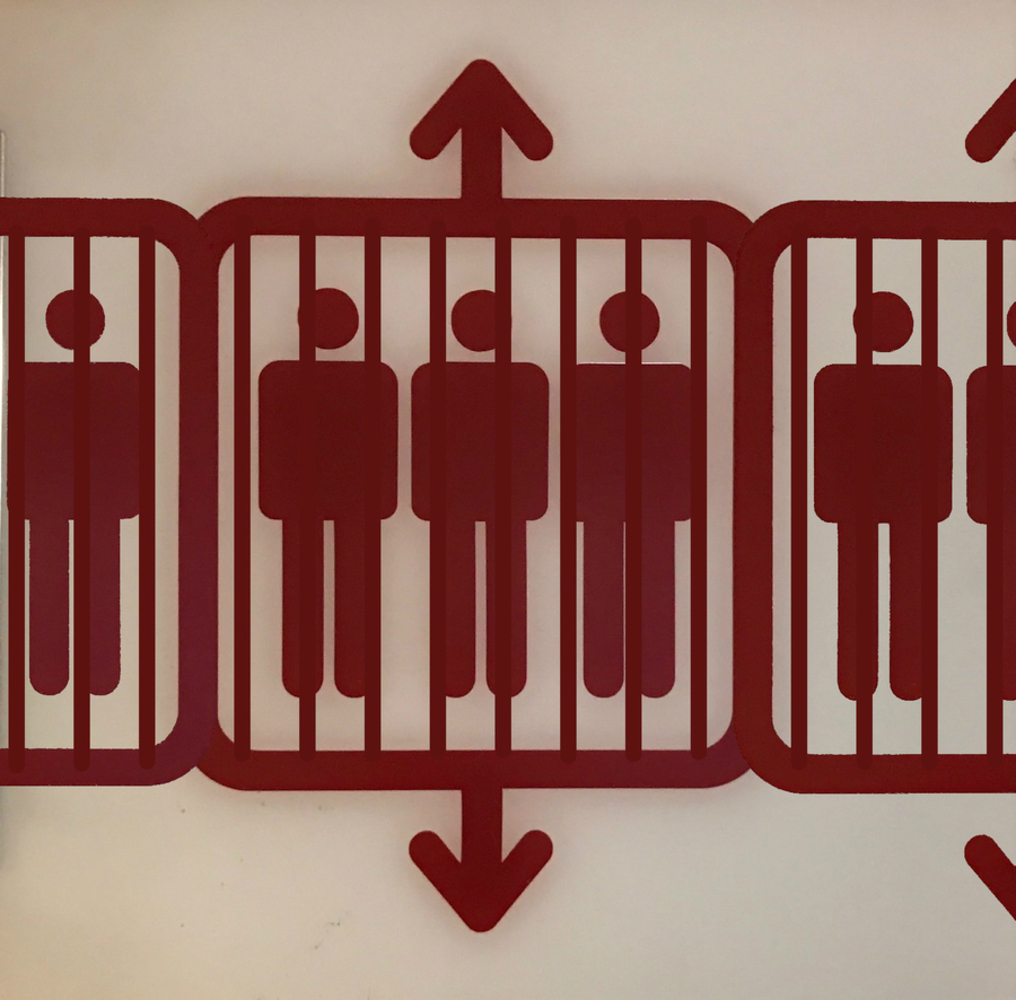 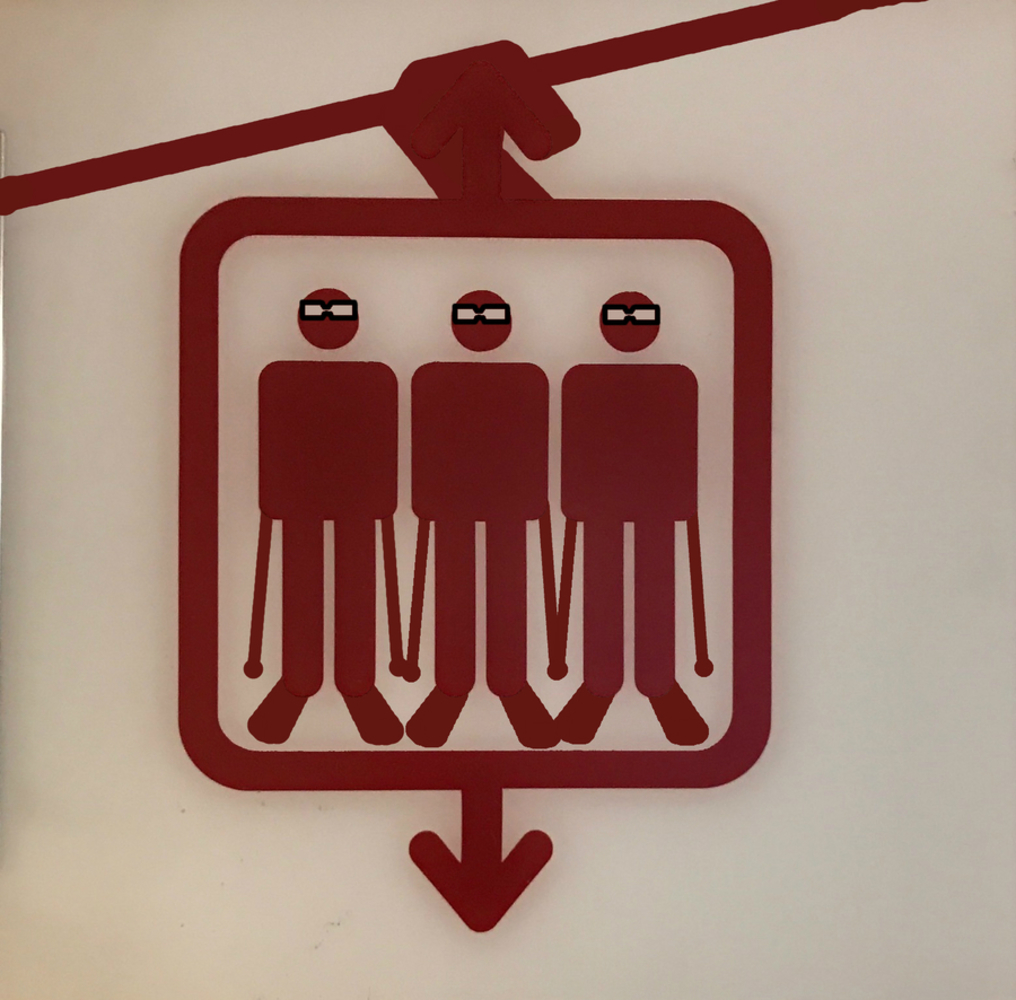 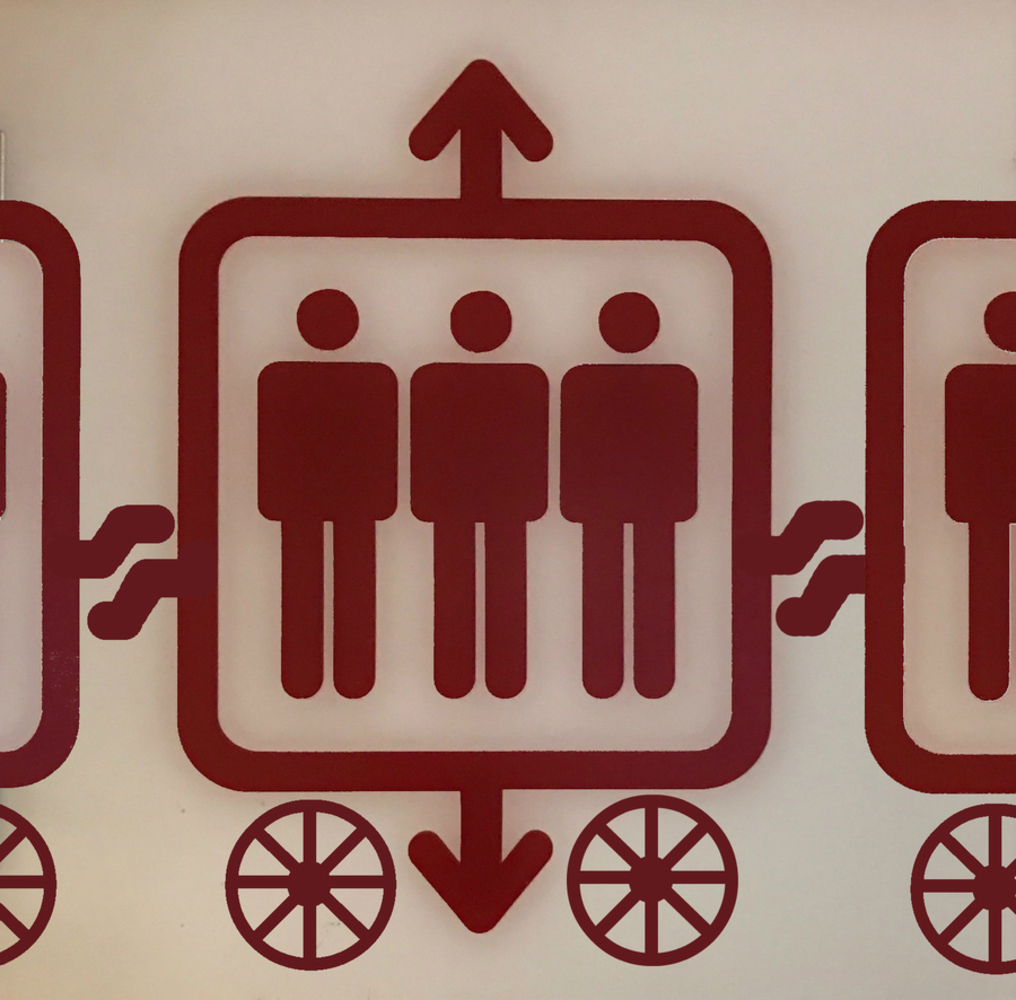 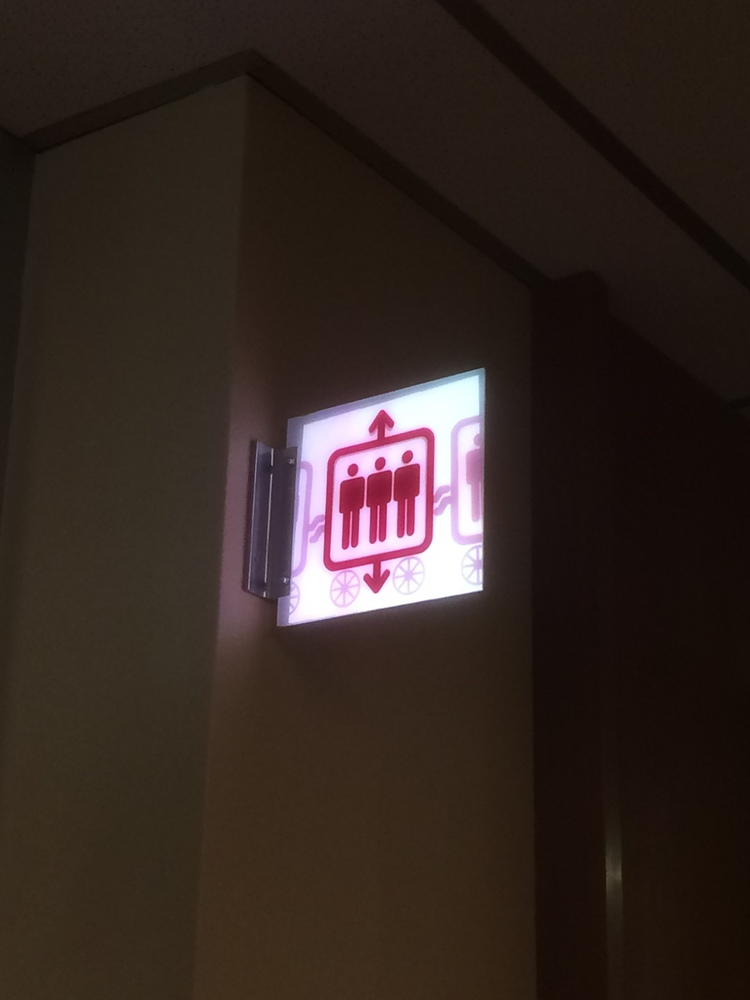 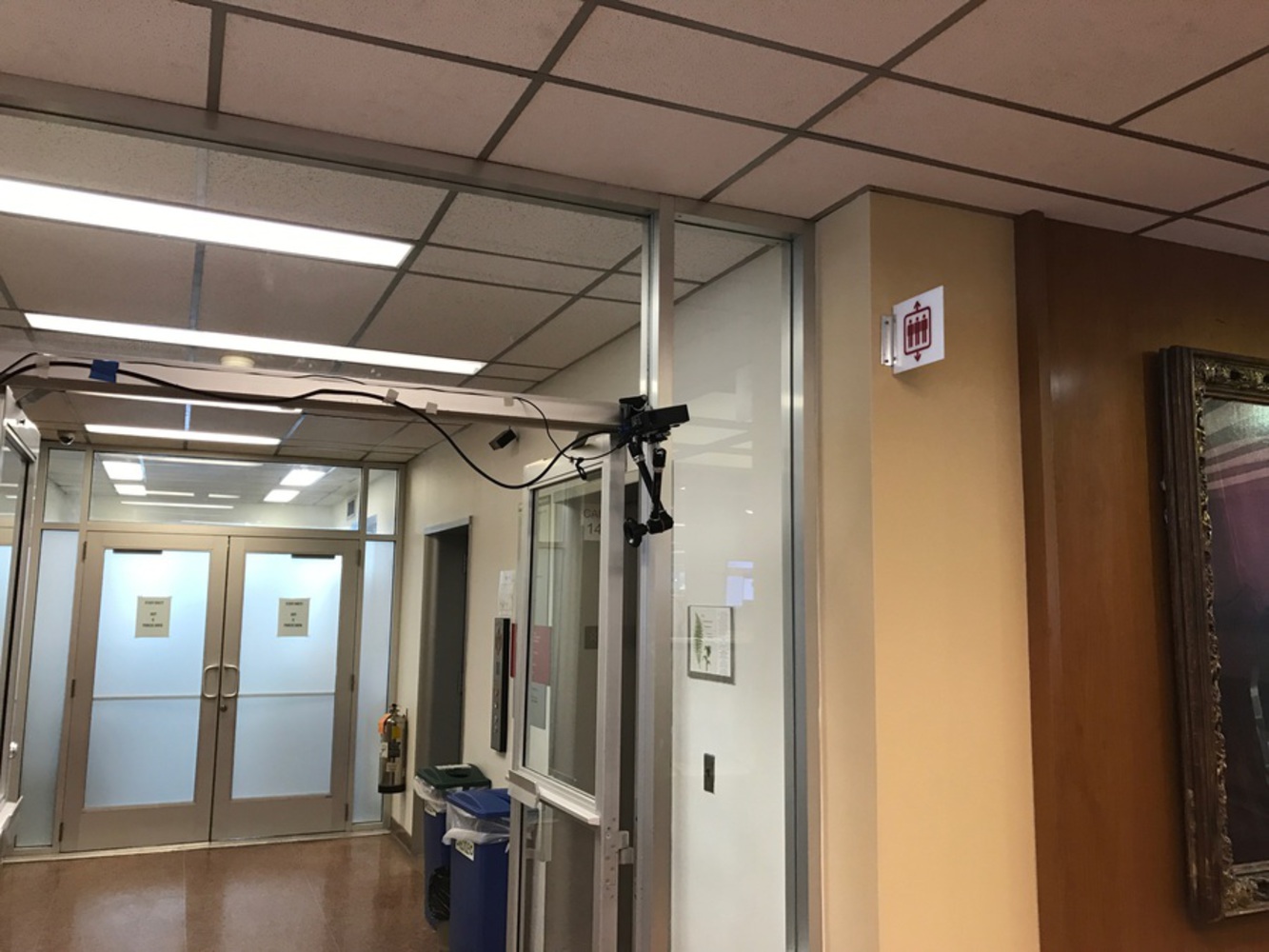 As stated in my proposal, I wanted to advance the work I did in module 1 and make it more generally appealing and interesting. In particular, I wanted to take something that already existed, and build over top of it to create something new. This is when the idea of recontextualization came to me, and I decided to find something that I could place into a new context and thus change the meaning. This is the reason why I worked with this sign because the generalized figures on the sign could already be interpreted in many different ways, and it gave me the freedom to add to it in a multitude of ways to change the meaning of the sign. I wanted viewers to be able to see these different viewpoints, and change their opinion based on the context that the sign had been placed in. This idea is particularly important currently with the huge influence "fake news" had during the recent presidential election in the United States.

1. This project is inspired by many of Banksy's works. During the first iteration in Module 1, I attempted to recreate his style in my own product. However, there is also something about the subject matter that must be considered. In particular, Banksy often does playful pieces where he uses some objects that are already present, and in a way adds to them to create something else. One example is his Boy With Hammer. Here he has taken an already existing fire hydrant and alarm, and added to it in a playful, not-too-serious manner to create artwork. This is a technique that I want to capture in my project as well, by having it exist in the environment of another project and using it as subject matter. 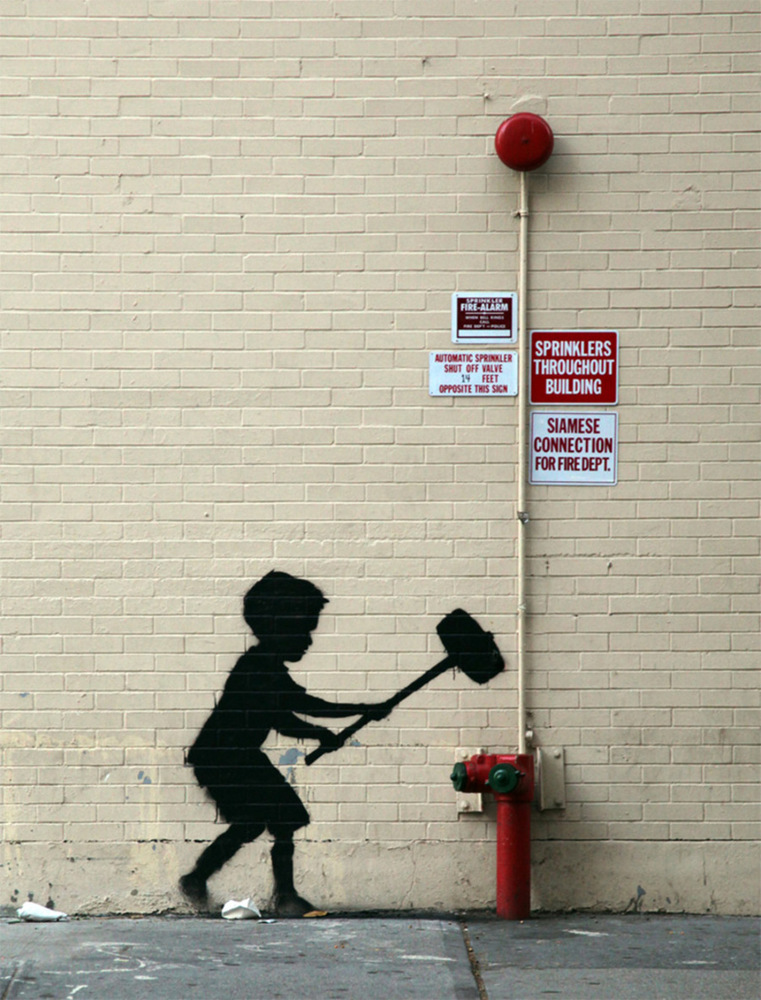 2. Extinguishing Bodies by Miranda Jacoby deals with using light source along with some sensors to animate some characters on a wall. Essentially, as more and more light is blocked off, these creatures go into varying states of panic until they completely disappear. This is an interesting example of using a projector along with animation, and informs my piece because I am also considering the use of some in-place animations as this piece does. It could clearly be very effective, and would increase the complexity of the piece. The work used Adobe Flash and Adobe Illustrator, which would be good tools to use for my work as well. Additionally working at such a small scale is also an interesting technique that I may consider in my piece as well.

3. Another work that informs my project is The Mourners, a work by Ali Momeni. This artwork is listed as architectural projections. It takes place in the Basilica of St. Mary, and involves projected imagery on the interior walls as music is played. The visuals are animated, and move in time with the music. This is a very similar example to what I hope to achieve, with projections onto walls that are animated in-place with respect to their environments. Although this project has widespread projections all over the interior walls, I will attempt to work with just one projection and still achieve a lasting effect for my piece.

This project took a lot of time to develop. Finding the subject matter I wanted to work with was definitely the most time-consuming component of the process. At first, I wanted to work alongside another project and create something that could be placed somewhere near another project, almost responding to it. However, after discussing these options during my desk crits, I realized that I did not truly want to respond to another project, but to something that was already there in place in the library. I then walked around the library for a while, taking pictures of interesting possible locations that I could work with (posted below). There were many options, but the elevator sign stood out because of the number of ways I could work with it. I then began developing ideas for how I could work with the sign, and what backgrounds I would create. After brainstorming and deciding on a few ideas, I instantly dove in, importing the images into Pixlr's web application, and adding layers over top to create the new signs. At first the signs were very complicated and had many colors, but I did not like those and instead started working on simplistic versions that had the same style as the original elevator, with the same background and foreground schemes. I also tried animating the signs by creating many different frames of each and then cycling through the frames quickly, but the animations did not quite work the way I intended, and I was too short on time to get them to work properly. Once I finalized the signs, I added them to a slideshow, set a timer for each one, and projected them onto the original sign, using Millumin for alignment. 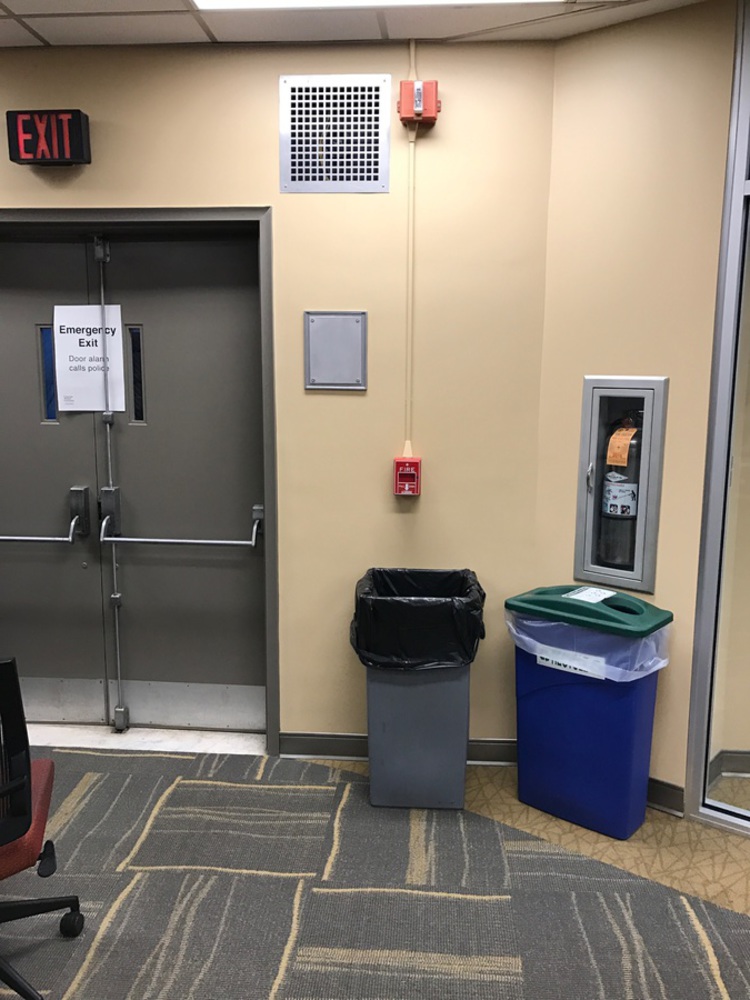 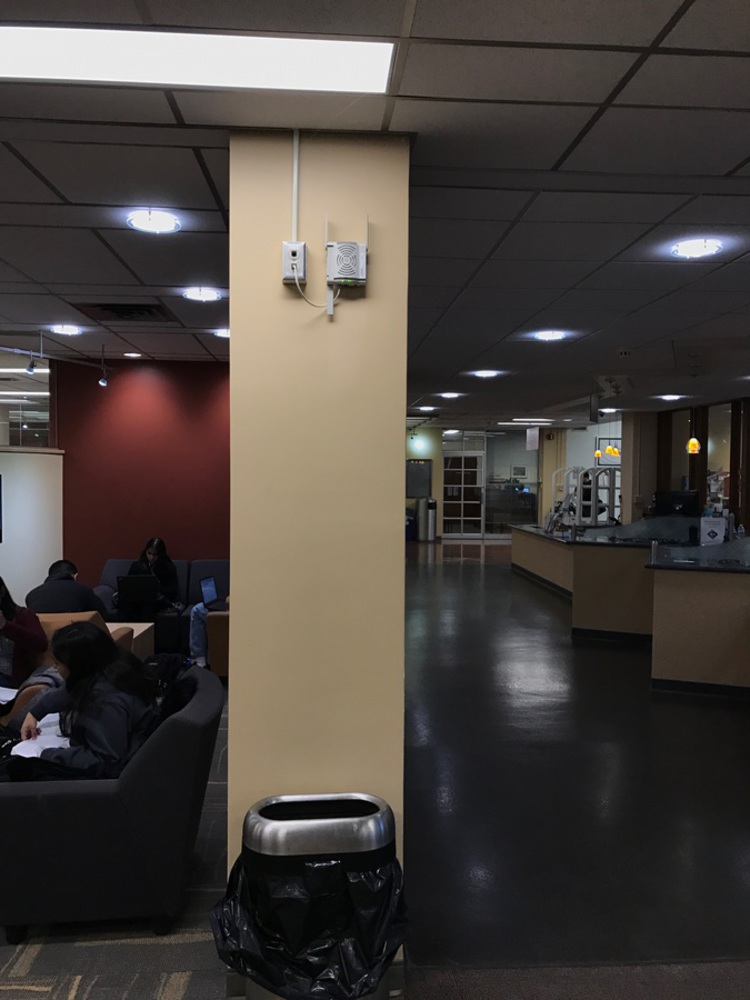 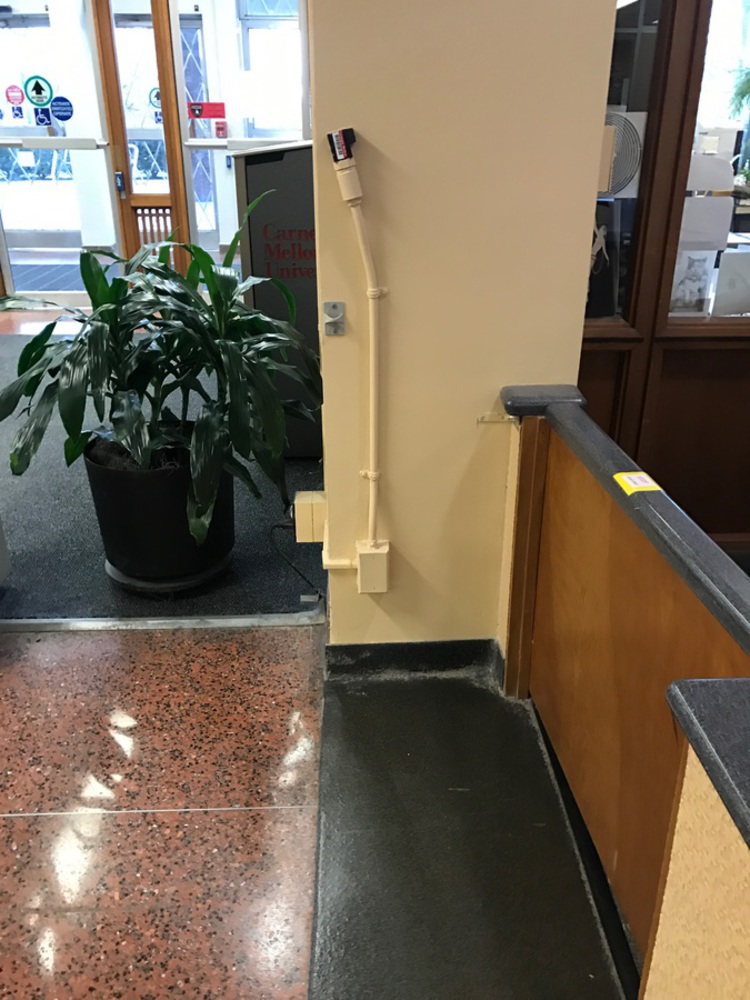 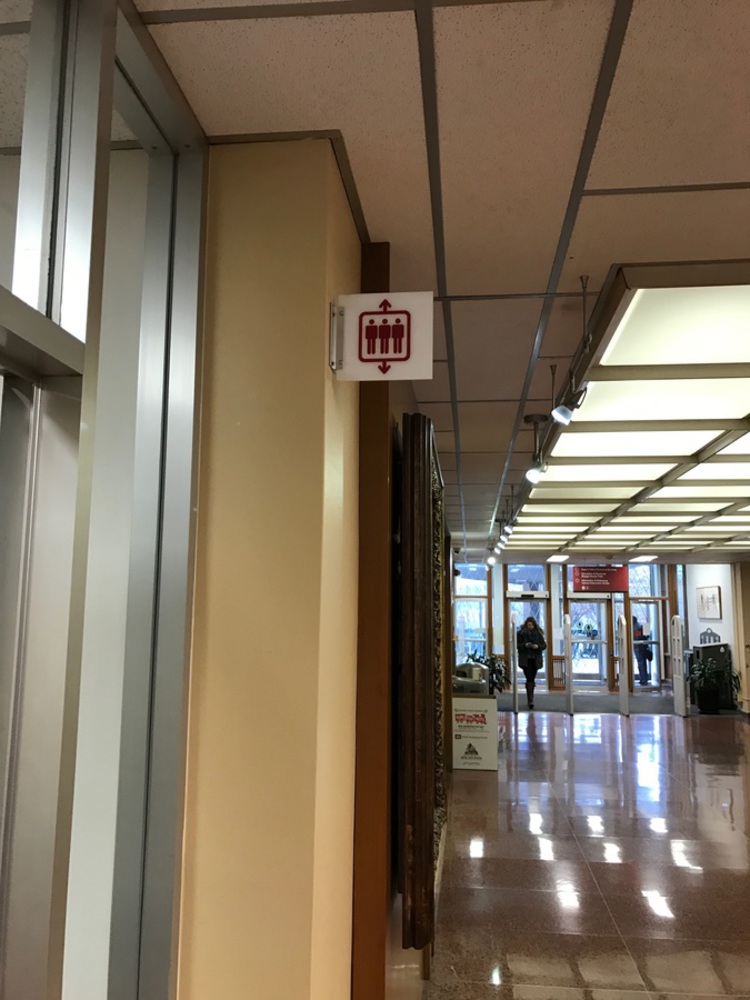 This was a solo project with no other collaborators.

My inner critic was fairly happy with this work. I definitely saw it as improvement over my module 1 outcome, and I truly believe I was very creative with this project which is something I generally have difficulty accomplishing. The outcome was close to what I intended, and viewers definitely responded to it in the way that I wanted. However, there are some areas for improvement. For one, I spent too much time brainstorming the idea. It took me so long to get settled on what I wanted to do that I was very short on time in actually being able to create what I wanted. Unfortunately there is not much I could do about this because the brainstorming and idea development was very important to the process, and the only thing that could help here was if I had more time. I was unfortunately not able to get animation working, but I was definitely aiming for too much on that front considering my time-constraints and lack of experience in animation. Also, the projected images were not as bright/strong as I would have liked, so in the future I have to be careful with my assumptions about how strong projected images truly are. All in all, I was very happy with my idea and creativity in the project, but the execution itself could use some work. However, since the point of this final project was to try as hard as possible even if we fail, I believe I accomplished my goals, and I am overall satisfied with what I managed to accomplish.

Sources that particularly guided the work:

In Module 1, when working with appropriation I created the piece below. I wanted to mimic Banksy's style, and I felt like I was fairly successful. However, in the critique that I received, I was told that although it was clear that I had a well-made final piece, it did not have the same "satisfying, biting wit that you find in an original Banksy."

With this project, I want to improve on exactly that aspect by creating something in a similar style, but on a broader subject matter that would be less political and have more general appeal because I feel that my previous work was too politically inclined, and I need to work with some other subject matter. Below, there are some examples of Banksy pieces that are similar to what I will attempt, with general ideas that have broad appeal.

In order to make this piece an installation, I will also have it projected onto a wall somewhere in the library. I may work with some architecture in the library itself and incorporate it into my piece. For example, I may project on a wall next to a window, and incorporate the window into my piece. As an additional level of complexity, if I have time, I want to try to animate the piece in place. By this, I mean simply have the components of my piece somewhat moving. For example, in the original piece this could have been achieved by having the child appear to be breathing slowly or having paint dripping out of his bucket onto the ground every once in a while. 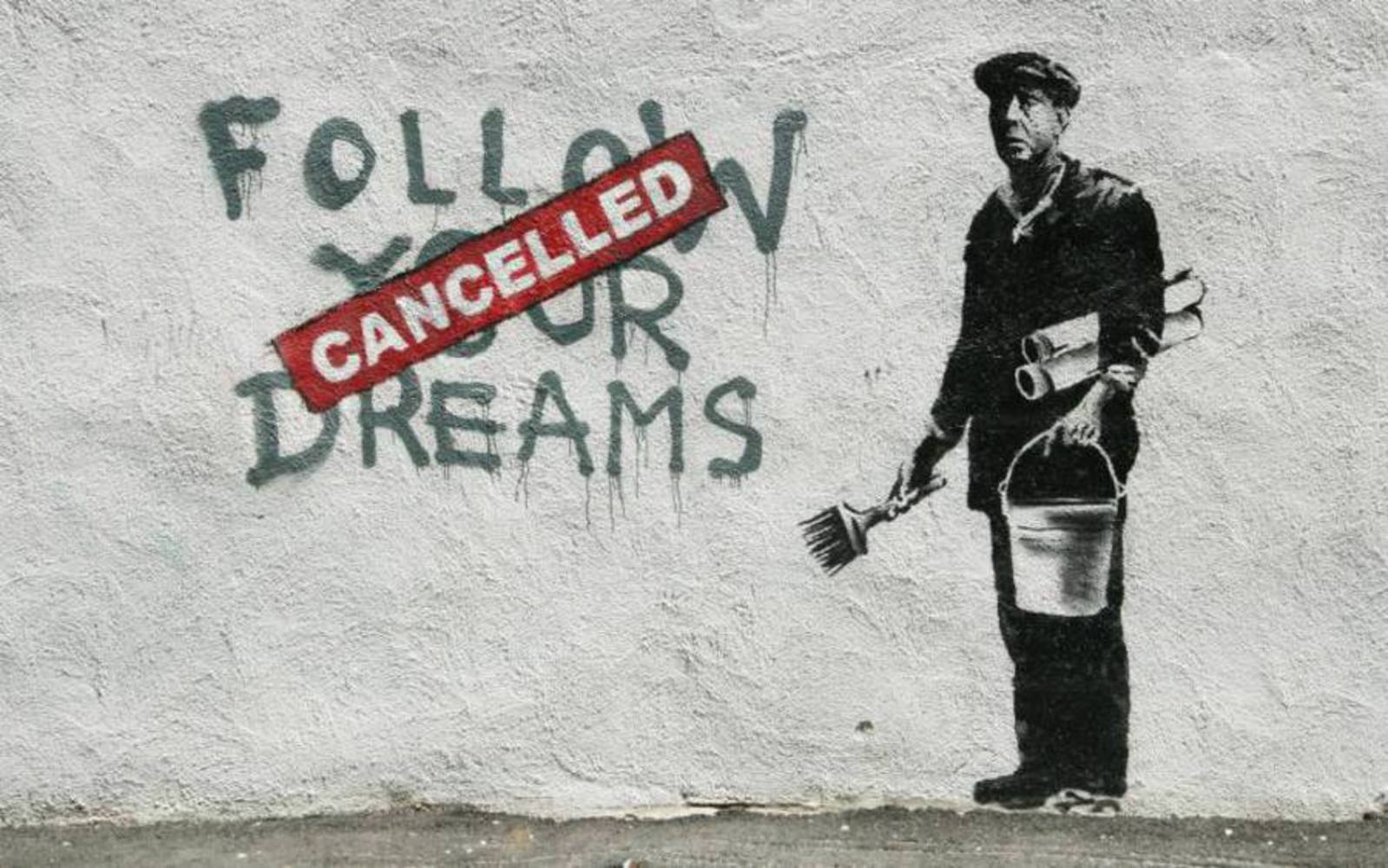 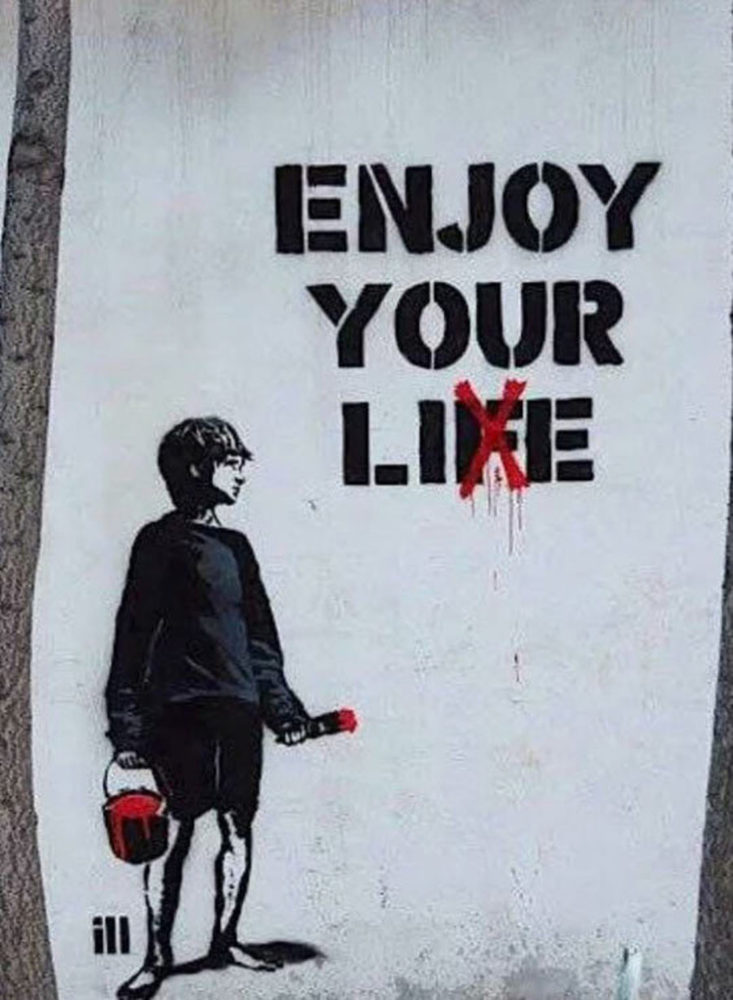 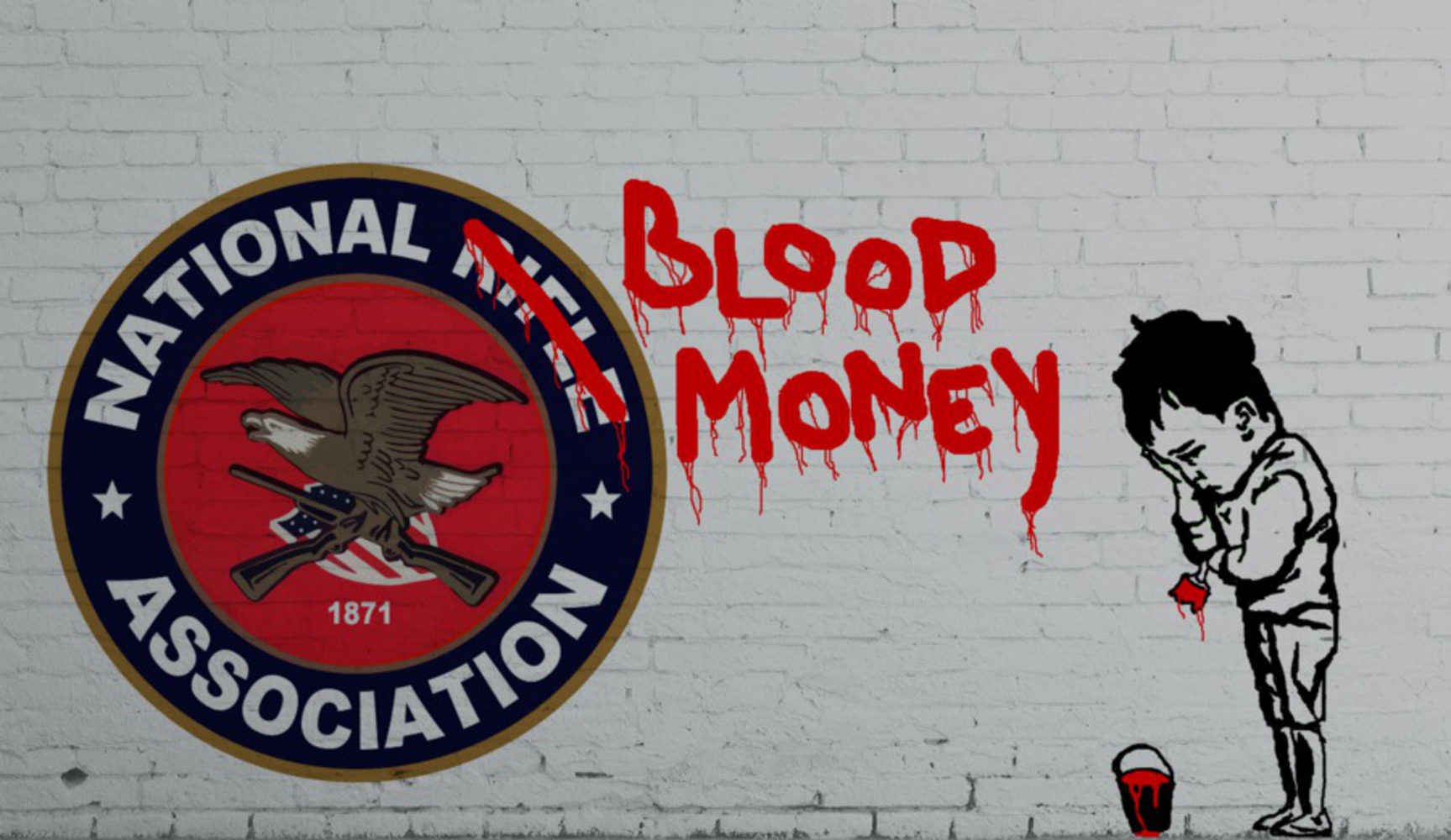 I think your project has a lot of potential. The intent is very clear, and it is definitely feasible to create something in the style of Banksy. It is also a great idea to animate the picture by making the child "breathe". Something that I would suggest is perhaps making your artwork more expressive than your previous attempts. You said your work would be "less political and have a more general appeal", but I think it is fine to do something controversial, as long as it's well-intended. Looking forward to seeing your final work!

An attempt at taking an elevator sign in Hunt Library, and placing it in a new context through the projection of new backgrounds