Made by Stephen He and Tian Zhao

Use wires to create an interesting and engaging liminal installation that promotes the idea of "progress" and entices spontaneous collaboration.

Our two primary goals in creating this project are: 1) Create a physical representation of progress and choice; 2) Encourage collaboration between participants.

We wanted to encourage collaboration in our art because we believe that progress and change does not happen alone. To step forward, we oftentimes need the help of others around us. Working with others in real life can make a challenging task into something trivial.

We want to create a physical representation of progression. Progress is an unending journey that constantly gets harder. Often times, people forget that hard work and struggle is necessary for success to occur. People might give up when we lose sight of our goals.  We want to demonstrate this by using projections of figures attempting to progress through our "wireframe" landscape.

Some thoughts to carry out the concept:

(1) Possible landscapes include: a vanishing point road, a bridge, etc.

(2) We will use the projector to project moving figures along the landscapes. This requires us to make a video in advance that fits well with the wire frame.

(3) We want to set our wire frames in sites that will stick out in the library. For example, the white walls on the first floor, if possible. And we can do multiple frames on different walls.

(4) We will try to incorporate our theme, "progress" in the atmosphere of studying in the library, in order to encourage students to be confident and perseverant.

A similar illustration that inspires us: 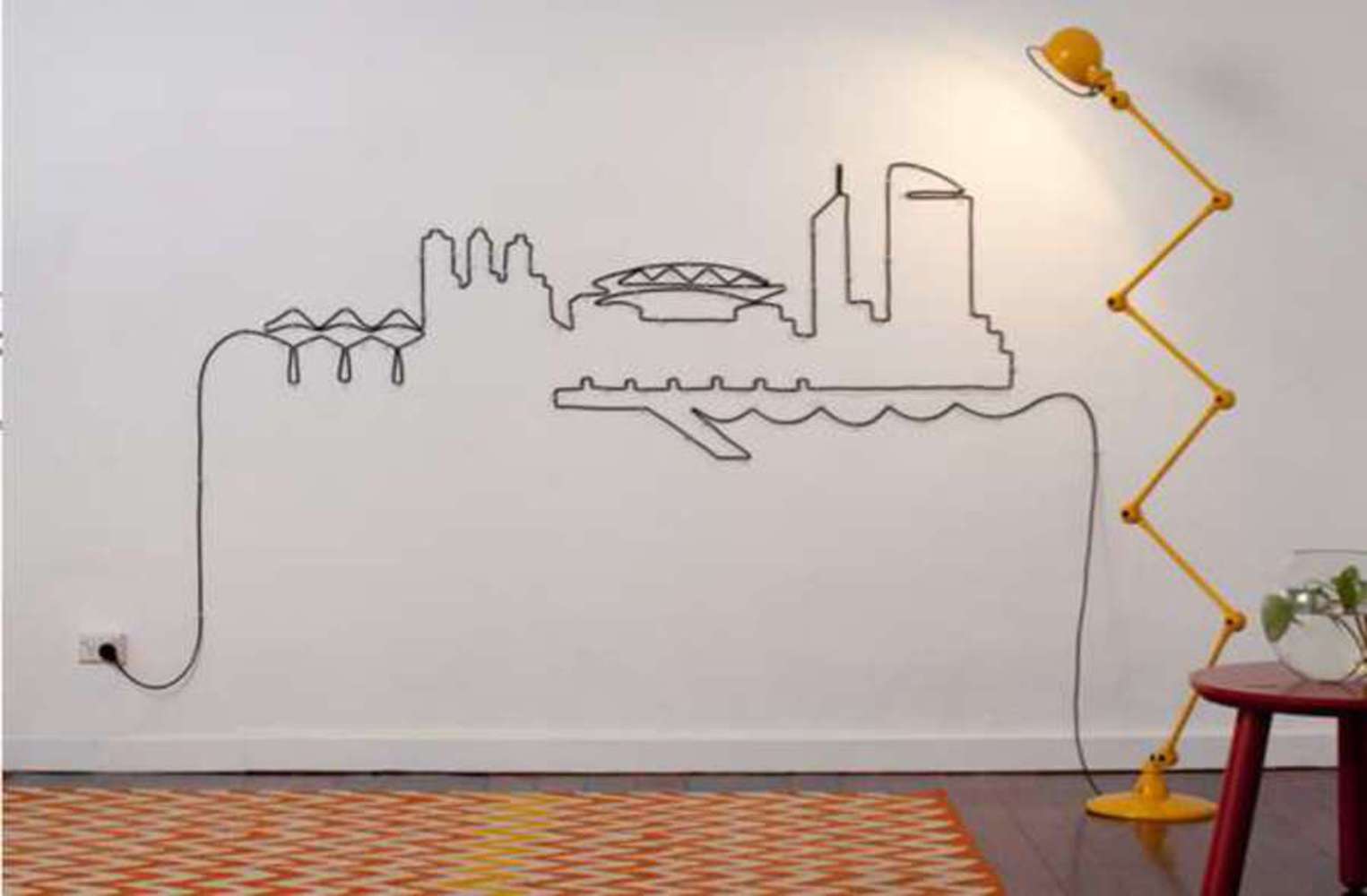 Include references and discussion of artists, artworks, movements or aesthetic frameworks/techniques/approaches that inspired your outcome, process or approach. What has informed your outcome? How does your outcome relate to other artists and their work? What ideas, styles, or themes did you draw on any why? You must cite at least 3 critical texts, theories or works.

1. Wall art of trees(see below)

Wall decoration is a form of art installations. The flexibility and stretchability of metals and wires make it easy for them to extend from 2-dimensional to 3-dimensional art and therefore give the audience different spatial experience. We were inspired by wall art that themed on trees, and we decided to do our own electrical tree. Our outcome is like a piece of interactive wall art under the influences of the wall decoration of metal trees.

A collection of wire frame art:

Wire frame art on walls is a branch of wall art. The collection of the artworks are created by numerous unknown artists and they utilize the electrical feature of wires very well. For example, in the wire frame artwork above, the wires are actually connected to the plug base, and used to power the lamp. It inspires us to use the wire not only as an art material but also as a carrier for currents.

Paul introduces the concept of "ready to hand". That is, technology itself should better fade into the "unconscious yet accessible" background for our mode of being.  The idea of making technology invisible inspires us to think of the possibility of making art installation "invisible". In our outcome, we tried to make our approach simple and clear using buttons that stick out, and explicit branches of the tree with lights on them. So passers-by could know that they can interact with the tree by pressing the buttons, without given explicit instructions. 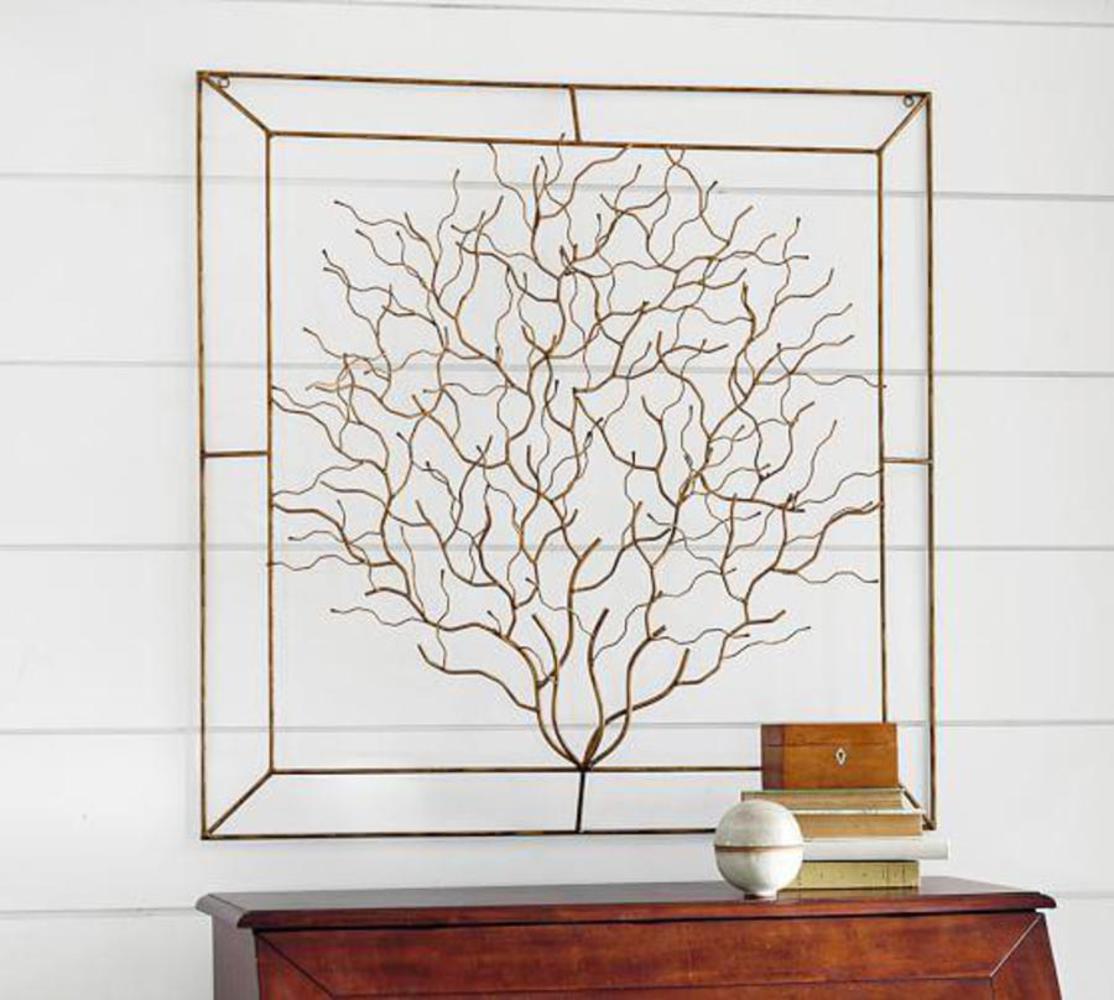 Initially, we wanted to make a wire frame outline of road, and demonstrate progression by having lights travel down the road. However, this seemed too simplistic in nature, as it was very literal in its description of progression. There was very little abstraction to keep the viewer interested. Also, it did not offer any interaction between the art and the viewer. As a result, we quickly abandoned this idea. However, we did keep the idea of hanging wires on the wall.

In order to abstract progression and introduce viewer participation, we settled on the idea of a tree. In particular, we found that a Y - fractal tree demonstrated the consequences of choices very clearly- moving up from the root of the tree to it's branches was a clear metaphor for choice.

We wanted to use buttons to involve the participants. Our big design challenge was to decide what placement we wanted to put the buttons. Initially, we wanted each split in the tree to be a button. That way, every split represented a different decision. However, the buttons were all congregated really close together in the center, and the whole tree looked very unbalanced.

We ended up deciding on placing one button in the center and the remaining buttons on the ends of the branches. This way, the buttons would be balanced around the whole tree and not be so squished together. Additionally, this limited the amount of wires we needed to cut and manage because branch ends served as easy start and ends for wires anyways.

Finally, we had to choose a location to set up our installation. We wanted to place our tree in a place of high traffic to have the possibility of attracting the most people. As a result, we chose a wall in the first floor of Hunt.

Tian: prepare the materials,  wire and decorate the switches

Together: plan out the prototype of the tree, wire the branches and ground all branches 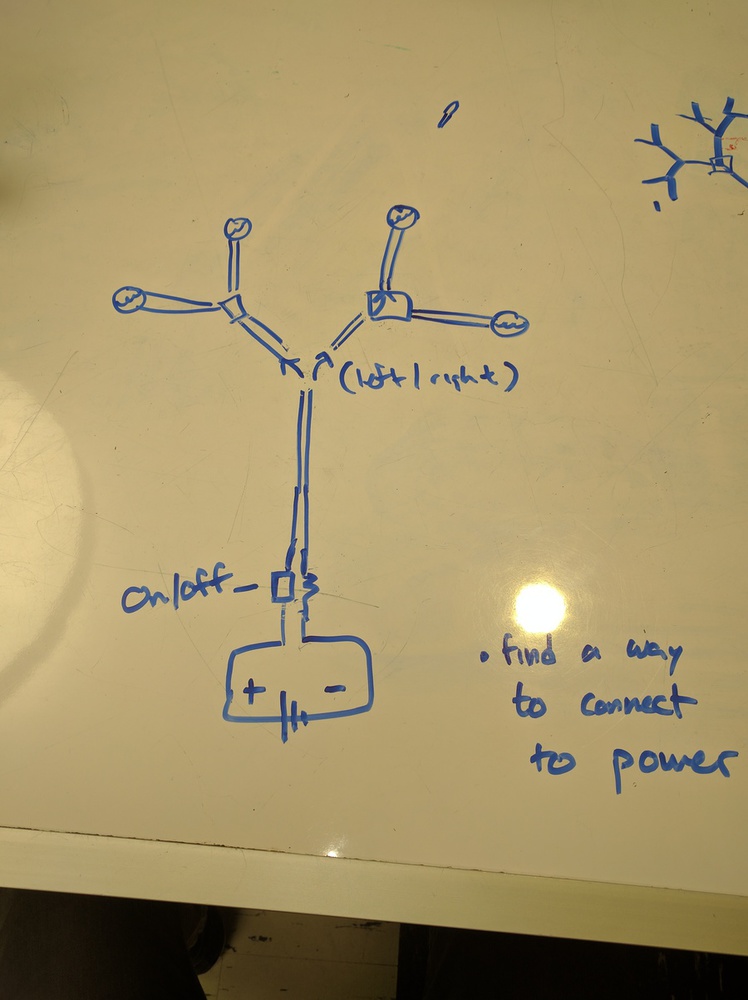 0
Deciding on the button placement and wire length 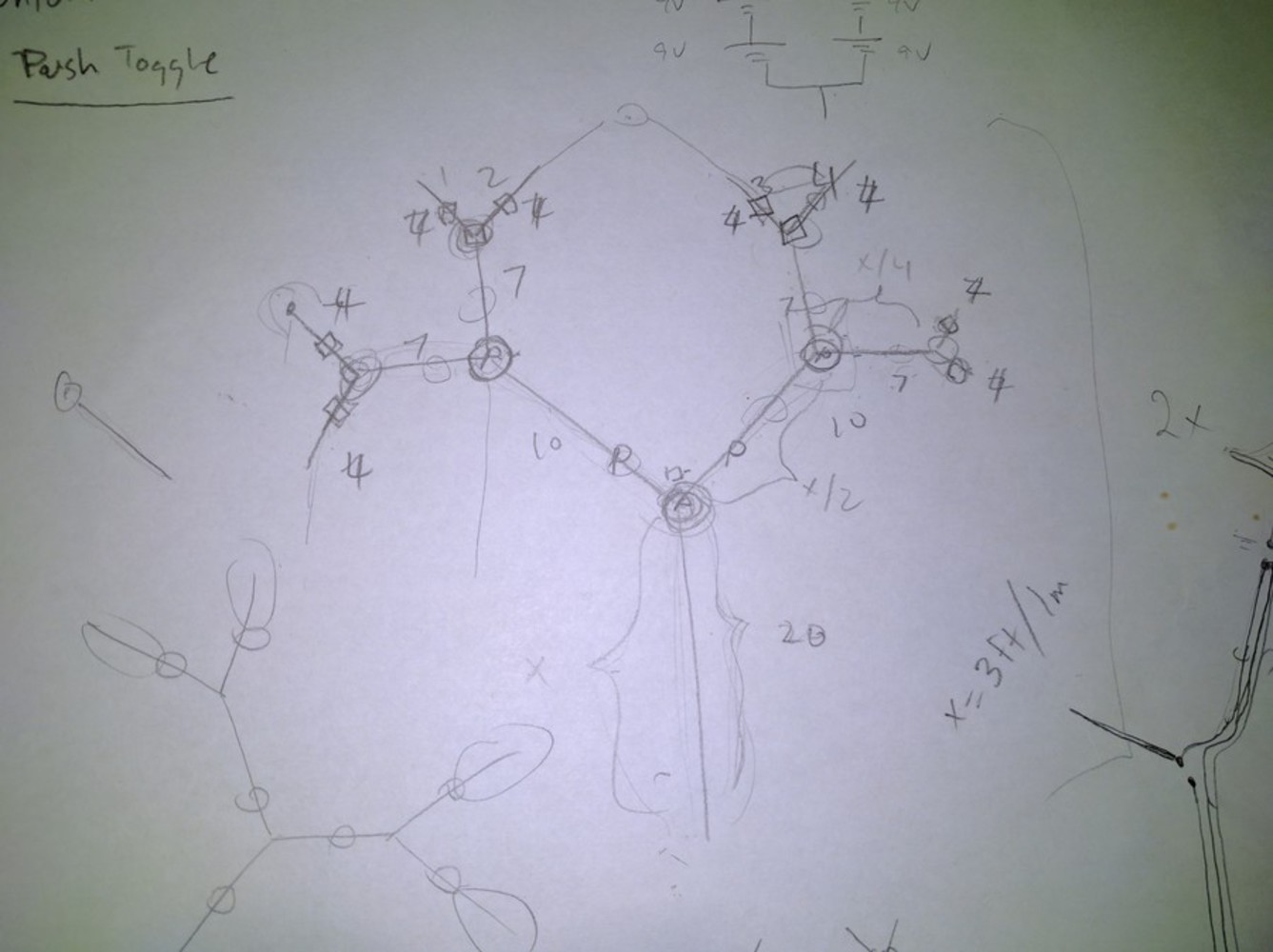 0
Deciding button placement on a split 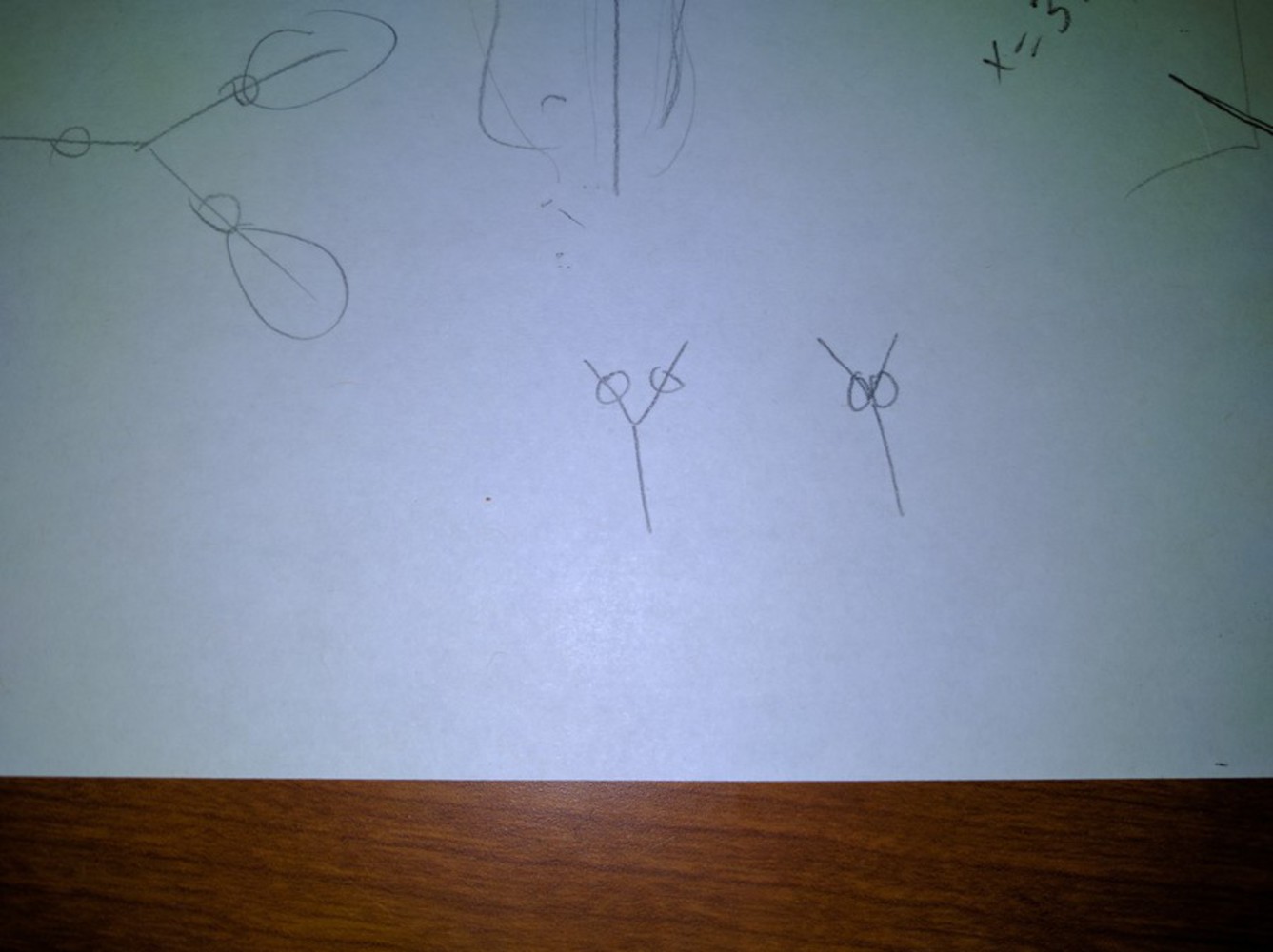 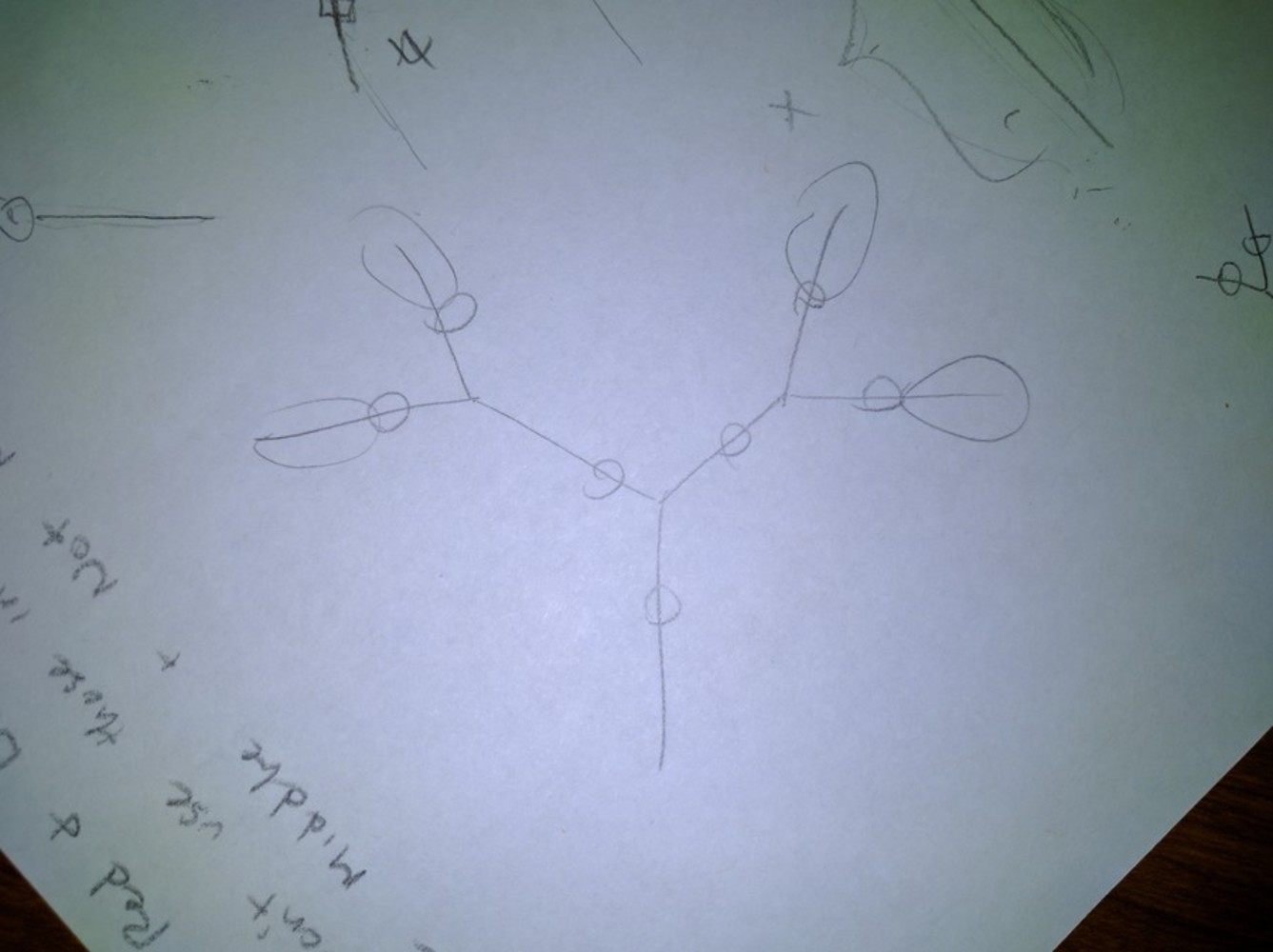 0
Working with a breadboard 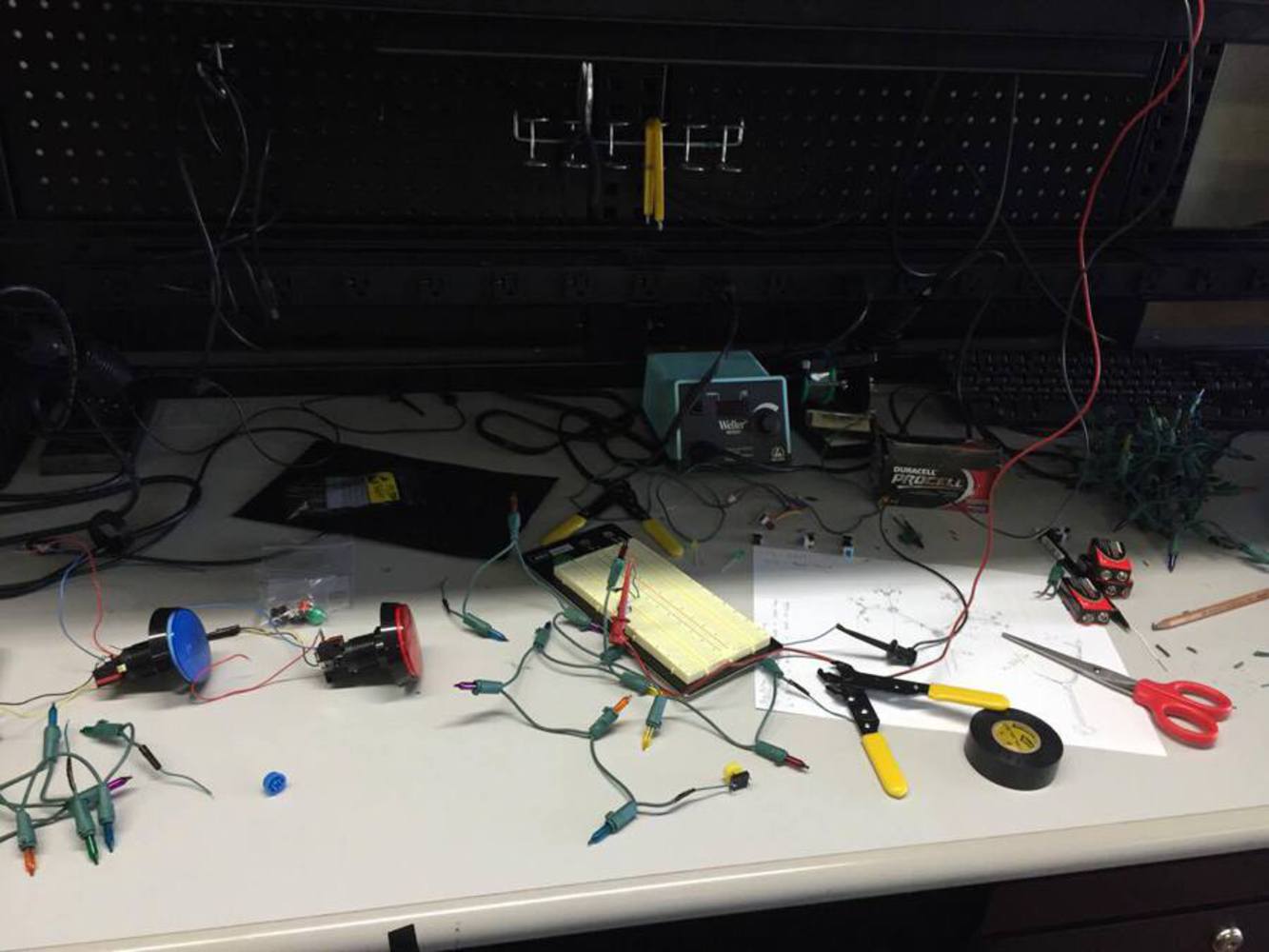 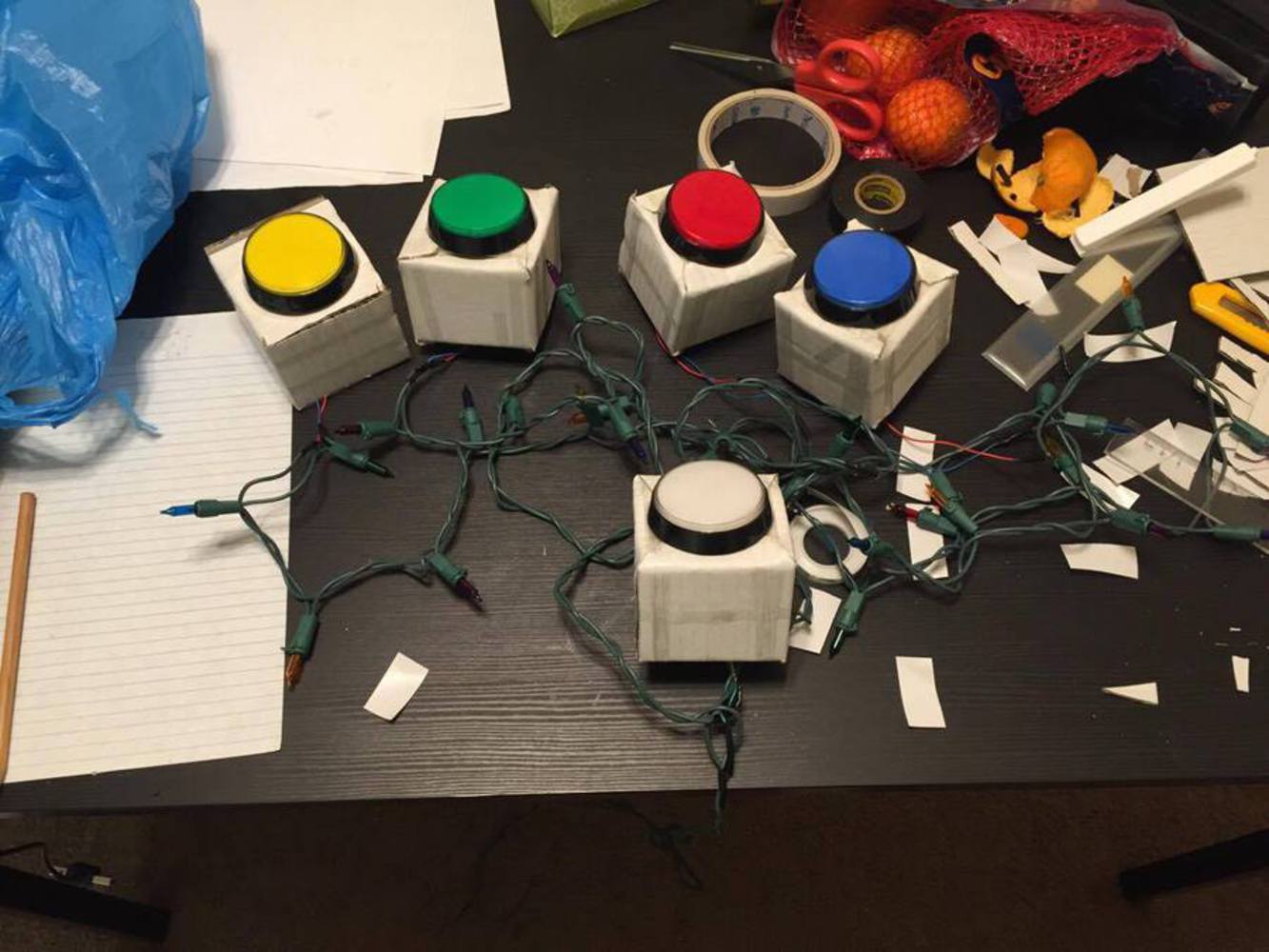 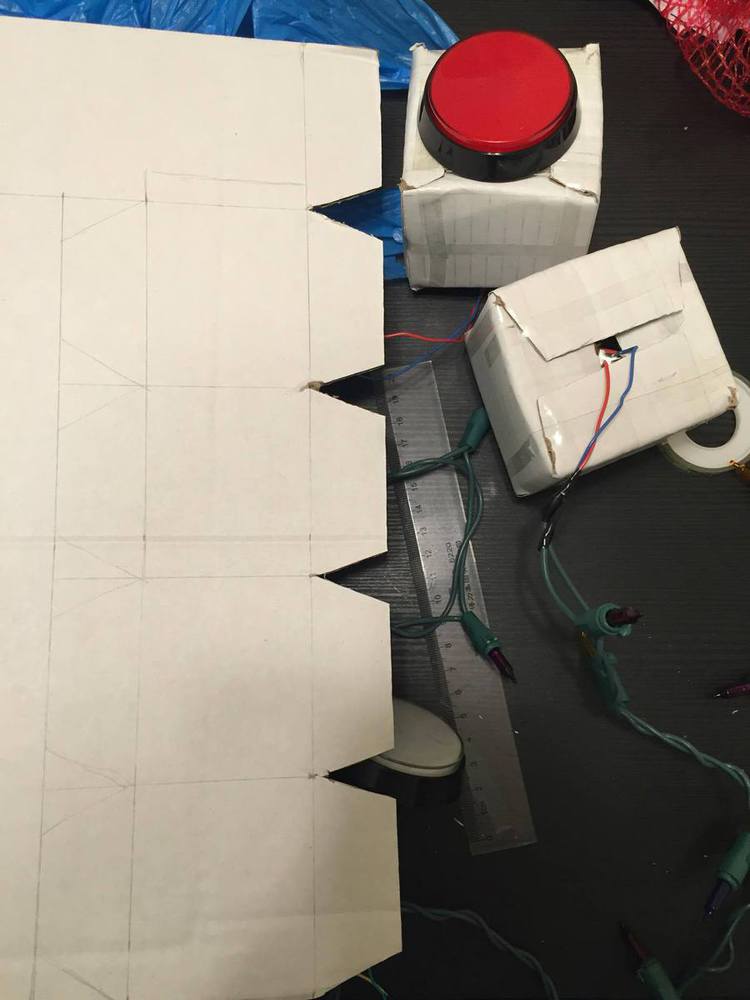 Describe the outcome. What did you create, how, etc.? How did you compose your image? What styles, methods or techniques did you use? What tools and technologies were involved?

We created a Y fractal tree out of wires, Christmas lights, and colorful push buttons. There are two levels of splits, resulting in four end branches off of one main root. Buttons are located at the end of each branch and in the center of the tree. Christmas lights line the branches, and green wires line the rest of the tree.

Three buttons were placed at chest height, and two more buttons were placed at slightly above head height. This was done so a vast majority of people can reach each button, and the tree can have the most visibility. We chose large round buttons on white boxes to encourage people to come and press the buttons. We also hoped that the Christmas lights would be intriguing to the average person.

We wired our wires, lights and buttons together using the ECE laboratory facility on Carnegie Mellon University. We used wire strippers, DC voltage sources (for testing), and multimeters (for testing). 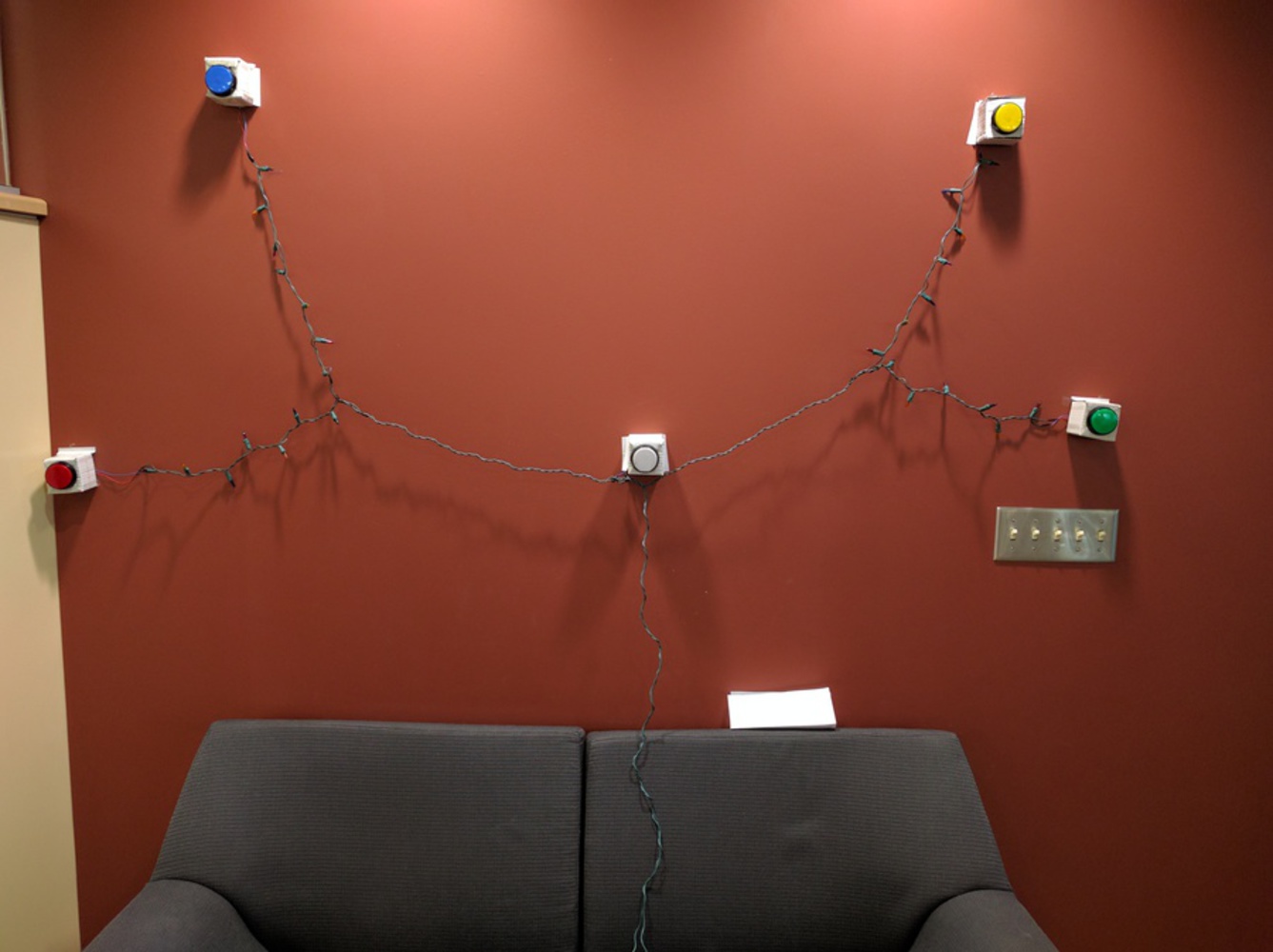 Critically evaluate the success of your own work. What does your inner critic say about this work? Did you match intent and outcome effectively? (note: use the framing questions to guide your response!)

Although I am happy with the end result, I can't help but think there is a lot to improve on this installation.

One of suggestions I received was to, instead of hanging our installation on the wall, spread our tree on the ground and take full advantage of the space. I particularly was interested in the suggestion that we have the main center button be placed on a coffee table, because a coffee table is already associated with interactivity. I believe that spreading our branches and lights in different patterns along the ground would be very interesting in helping develop scale to our installation. Also, I think it would help promote interaction because people normally move through and interact with space more easily than with walls. I can imagine a whole room with lights and buttons laying across, and people pushing buttons to test how they interact with each other.

One thing that I am proud of is that this idea is very scalable. Lights and buttons can scale further and further outwards to fill a whole room easily. One positive is that the larger scale this installation gets, its emphasis on collaboration grows. Scale can actually make this concept have a greater impact.

Briefly outline what you took away from this project. What did you learn? What would you do differently?

If I were to do this project differently, I would have planned our installation around a space rather than a wall. I believe that having our tree hang from a wall ultimately limits its potential as a source of collaboration. Ultimately, we were so caught up in the idea of walls that it did not even occur to us to go horizontal rather than vertical. As a result, I have learned that it is easy to become complacent in one's ideas. I believe that with practice, I can become more open minded and forward thinking about how to plan an installation.

Also, we would have made more branches and spread the tree to a larger spatial scale. As is mentioned in the critique section, the tree would turn out more interactive and would more effectively present our theme, "choices" if we can spread our tree out instead of sticking it to the wall. These changes will make our project more interactive.

The way your project looks and is built is very reminiscent of ivy, particularly how it grows and takes over walls. Your project overtakes somthing inherently functional, walls in a library to separate rooms, and layers it with something that library-goers can respond to. You make the walls no longer static just taking up space. They can be touched and just as it branches out more and more, it calls for more and more participants to hold down buttons. Composed all of elements we know, buzzers, christmas lights, the combination is something we must discover for ourselves, through touch. This way your project has a calling of its own.

Use wires to create an interesting and engaging liminal installation that promotes the idea of "progress" and entices spontaneous collaboration.